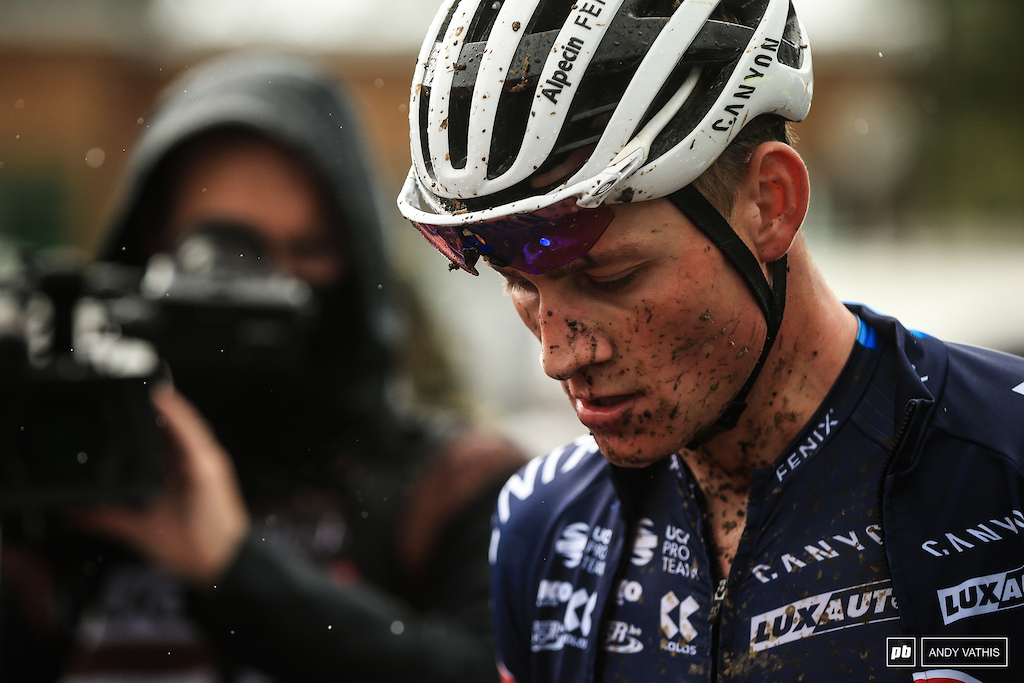 
CyclingTips has further reported that it could be months before we see the 26-year-old Dutch powerhouse back racing. The injury Van der Poel is suffering from is called retrolisthesis and Van der Poel’s team doctor Guy De Schutter explained to Het Nieuwsblad that one of the discs in his back isn't fully functioning and needs complete rest to heal, something that will take some time.


The Alpecin Fenix team announced it signed Mathieu Van Der Poel for a further four seasons in September and the team supports is supporting Van Der Poel rest period and his recovery. Van der Poel has been part of the Belgian outfit for the past ten years and will continue to race in their colours until the end of 2025.


We wish Mathieu Van Der Poel all the best with his recovery and hope to see him back racing all disciplines pain-free, including World Cup XC, later this season.

DBone95 (Jan 10, 2022 at 14:13)
As a 54yr old that has had 4 lumbar surgeries, including a 3 level fusion, and battled back pain since my mid 20s I really empathize with MVP. Hopefully he can kick it and get back on the bike cause I can watch that dude ride any type of bike all day long.

I believe that 20 min mild walk or run + sauna, Few exercises will help

jomacba (Jan 10, 2022 at 19:46)
I feel this. I currently am dealing with a herniated C5, C6, and C7 vertebrae that's causing partial paralysis down my left arm. I have also herniated my L4 and L5 about 12 years ago. Spinal injuries suuuuuuuck.

jomacba (Jan 10, 2022 at 22:57)
@phazedplasma: Currently PT. I have an upcoming MRI appt and a meeting with a neurosurgeon to evaluate the best path for recovery. I am using a Compex EMS machine on the parts of the arm that don't function 100%, and to strengthen the tissues around the vertebrae in hopes it helps alleviate the pressure points.

hamncheez (Jan 11, 2022 at 10:04)
I have two compression fractures from a road bike wreck that almost paralyzed me. I'm off the bike for 6 more months. I have a small taste of how frustrated MVDP must be feeling

jomacba (Jan 12, 2022 at 6:52)
@krpduner77: I won't lie, this is something I am definitely interested in. I'm just concerned about the durability of them. I also compete in grappling, and I don't want to give that up.

krpduner77 (Jan 12, 2022 at 6:57)
@jomacba: I am a Physical Therapist and have seen them for over a decade with absolutely no issues. Just like a knee or hip I feel they last for life. The surgeon is a good friend and we talked about durability, specifically me crashing MTBing and landing on my head etc and he felt there are no issues at all about durability etc. Also its nice to be able to look up and descend a trail without my arm going numb

jomacba (Jan 12, 2022 at 7:08)
@krpduner77: Hmmm, I'm intrigued. I appreciate the insight. I have a meeting with a neurologist in the next week here to discuss options.

hamncheez (Jan 12, 2022 at 7:23)
@jomacba: I "throw my back out" if I roll several days in a row. Its severe back pain, with spasms. Doing daily stretches, especially calf stretches, can make it manageable, but I still stopped going to my local gym (and now I have two broken vertebrae that has an unknown recovery)

krpduner77 (Jan 12, 2022 at 13:51)
@phazedplasma: I had both done at the same time about 7 weeks ago. I started riding flat roads on the MTB at 3 weeks per MD clearance and a week later fire roads, steep climbs included a week later. Im up to about 3+ hour on MTB without pain or limitation. I have done some single track descends over the last couple weeks with decreased speed that I feel comfortable having a get off I can avoid falling on my head. MD says the repair is stable and safe just soft tissue that would get painful. I had no pain day 1 and full ROM by 3-4 weeks without pain. I am lifting pretty moderate now but had a 10# restriction for the first month or so. Sleep any position I want, only limitation is I fatigue on the computer in the traps a little but no big deal.

RONDAL (Jan 10, 2022 at 13:49)
wout and piddock are going to clean house in the coming months. sucks because it was building to be a great battle to watch the three of them go at it across multiple disciplines

billythegerbil (Jan 11, 2022 at 6:52)
Think the puns here are in mildly bad taste. The three of those riders are arguably once in a generation and it really sucks not to see the three of them battling at full fitness.

krazyjey (Jan 10, 2022 at 14:16)
"Van der Poel's early Tour de France exit not good for cycling, , He should have prepared for the Olympics in a different way " says five-time Tour winner says Eddy Merckx .Cycling news July 06, 2021
www.cyclingnews.com/news/van-der-poels-early-tour-de-france-exit-not-good-for-cycling-says-eddy-merckx
Hope he is healing well and will come back soon .

eblackwell (Jan 11, 2022 at 12:58)
I wonder if there are some training changes that he will be able to implement to address this in the future. I am not super familiar with how road/cross cyclists train, but I've noticed adding more weight training to develop strength and mobility (especially in the posterior chain) has really helped reduce my back pain. I imagine with the volume they do in a bent over position on the bike, pro road guys must struggle with muscle imbalances and low back pain.

august4072 (Jan 12, 2022 at 10:20)
Bummer, I have tickets to the World championships and was hoping to see a MVDP and WVA battle. Still worth the trip of course and hope he recovers well, he's definitely a favorite of mine to watch

enduromtbtrainer (Jan 10, 2022 at 16:53)
Go see Dr Guy Voyer (guyvoyer.com) in France, he's the only one in the world to not only treat you correctly but get you back on the bike asap!

AirAdjuster (Jan 10, 2022 at 13:05)
Maybe a second opinion is in order. The doc's name is suspiciously close to someone in the competing camp. Just sayin. But seriously, frustrating for Mathieu - not knowing when the recovery will start.

Yeah, it must be pretty frustrating. He and his inner circle regularly admit he's a bit of a Duracell bunny. Full of energy... I guess Fortnite has become riskier since now. He used to play that game a lot and probably still does.

jonnycanfield (Jan 10, 2022 at 16:27)
Just wait for the end of the second WC and Gwin will pull an back injury. Of course it's not because of poor results.