Update: Mathieu van der Poel to Miss World Champs Due to Back Pain 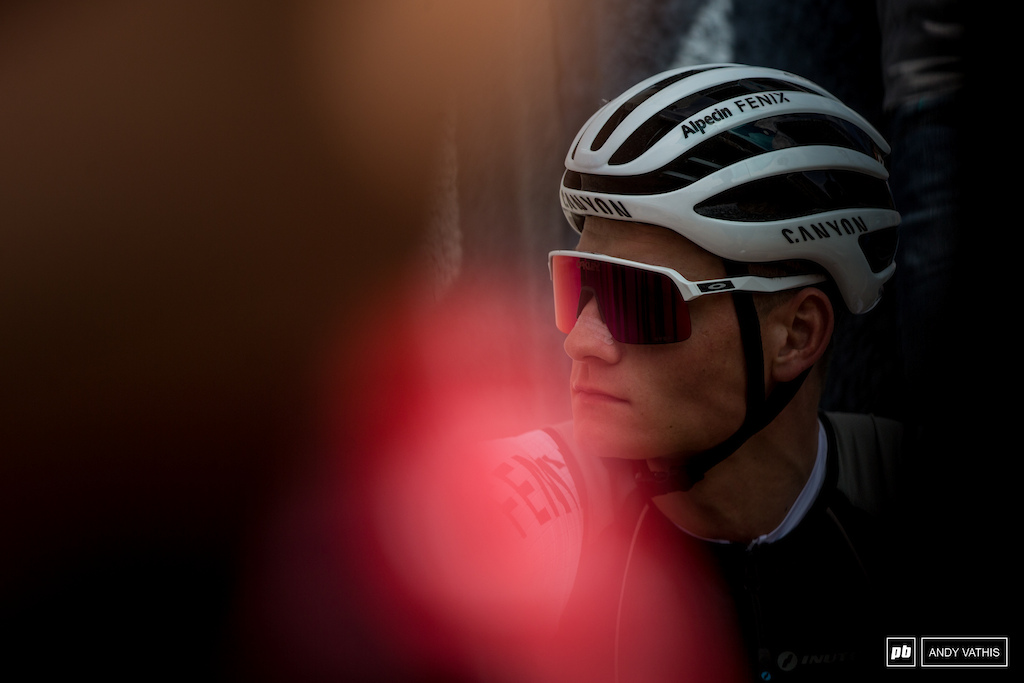 Team Alpecin-Fenix announced today that Mathieu van der Poel's back pain will prevent him from racing World Championships at Val di Sole this week. He will instead focus on rehabilitation so that he can finish out his road season with the Paris Roubaix, the Benelux Tour, and other road races.


It feels like just the other day that Mathieu van der Poel seemed unstoppable, claiming the yellow jersey for six days at the Tour de France before leaving the Tour to race the Olympics. Now, the 26-year-old Dutch road, cyclocross, and cross country star had to cut short an altitude training camp due to back pain that has increasingly plagued him since the Albstadt World Cup and has put the rest of his race season in jeopardy.

Van der Poel is scheduled to race the cross country World Championships next week in Val di Sole before returning to road racing for the rest of the season, but Alpecin-Fenix team manager Christophe Roodhooft told Dutch news outlet Het Laatste Nieuws that things will have to turn around before van der Poel can seriously train again: "He has problems with his lower back. Riding at ease is possible but of course that's not training," he said. "That's why we decided to stop the training camp."

Van der Poel's crash in the Olympics isn't the root of the problem and his team says he has suffered from worsening back pain since the Albstadt World Cup, but landing on his back in the Olympics certainly didn't help and his condition has worsened since then. A painkiller injection to his back and adjustment of his cleat position so far haven't eased the pain.

"Mathieu indicated that he would like to do it," the coach said. "I immediately felt that he thought he had something to put right," he continued, before explaining that van der Poel also needs the UCI points. Missing out could take away his eligibility for next year's short track races and would no doubt put a damper on his offseason.

The next couple of days will likely bring answers about the rest of his season. We wish him all the best in his recovery and hope to see him at the start line for Worlds next week.

dancingwithmyself (Aug 20, 2021 at 18:40)
Solid comment. Laughed out loud. But do hope he gets better. He’s taken so much abuse. Hope he gets some redemption.

ratm54 (Aug 21, 2021 at 5:16)
And in conjunction with the lack of telescopic seatpost probably has ruined all his chance for olympic game...

badbadleroybrown (Aug 20, 2021 at 16:31)
Really undervalued just how important the lower back muscles are in stabilizing the core for good power delivery through the pedals... Hope he heals up, racing is better when he's in the mix.

Rich-Izinia (Aug 21, 2021 at 5:46)
When I got a single speed I couldn’t believe how quickly my lower back tired. Pros are putting infinitely more power through to their bikes than I am so I can imagine back issues are a real problem and take a while to heal.

ReeferSouthrland (Aug 20, 2021 at 19:39) (Below Threshold)
It's funny seeing an elite rider flopping off a silly drop I could hit on a skateboard. The ramp thing ehhhy, from what I saw most riders were "hucking" that section as the landing was decent and wide open. I think he should have been training to drop that massive the whole time.

HankHank (Aug 20, 2021 at 17:32)
It's been funny reading the comments on his Olympic Friday Fail audition - let's be honest, he deserved it - but he has the potential to be one of the greats and he should be at the sharp end of bike racing. Get better soon MvdP, from the PB community. We promise to save ramp jokes for special occasions.

Rodeodave (Aug 20, 2021 at 23:52)
He starred in several hair product commercials during the Tour de France, that would've been your chance.

james182 (Aug 20, 2021 at 18:23)
Sux. Talented as they are, Guys like him put everything into their careers as racers only to have it all go south on one small miss or miss-step. My heart goes out to him. Be strong and heal quickly, we love watching you ride.

Lookinforit (Aug 20, 2021 at 18:58)
As silly as the fall might have been, it looked pretty gnarly and I definitely winced. Silly falls still do big damage.

I once fell off a curb (was watching a deer) and broke a finger. Was off the bike for 4 months...

Pins, screws, plates and bars, and 2 years of physio later…so yes I agree, silly falls can still do big damage.

stubestrong (Aug 23, 2021 at 1:39)
@Canadmos: 100% silly moments cost the most, little pinky clipped a tree and dislocated and snapped… op plate screws and now back on bikes after 4weeks. Grip strength -40% as a result doh

Yeah, I know, but I still couldn't help myself.

BenTheSwabian (Aug 21, 2021 at 0:42)
Every XC racers worst nightmare. If it's really severe, lower back pain completely eliminates your ability to put down power.

doncouzens (Aug 23, 2021 at 8:18)
I have raced xc, marathons and DH in my time, but sadly many of the road cyclists bring there attitude to mtb. Ride your bike, have fun and shred. The top dh riders have a blast doing what they love and the other disciplines could learn a thing or two....

entrecerros (Aug 21, 2021 at 7:30)
I was told by a doctor that the simple fact of thinking about Pidcock taking another gold causes backpain in some riders. The paper seems to be available in Pergamon's database.

WoodenCrow (Aug 20, 2021 at 18:16)
How many of us clicked hoping they were going to reveal a new Magic bullet for fixing our back pain?

PHeller (Aug 20, 2021 at 20:18)
More concerning than this setback is how early in his career he is. Calling it now, if he races another Olympics he’ll win it, but he’s gotta make it 4 years.

betsie (Aug 21, 2021 at 0:17)
Poor guy, he was about to be in top for a while, confidence rocketed and then Pidcock came along. He has dominated cyclo-cross too. Going from the top to being dropped has to be incredibly hard. hopefully he gets through this tough patch, the niggles get better and he rests long enough to come back fully fit.

Mazador (Aug 21, 2021 at 14:35)
@betsie: last time I checked mvdp won the cross world's this year. Over wva, with piddock trailing somewhere in the background. Xc has been more of a mixed bag but none of those three have ridden a full calendar.

badbadleroybrown (Aug 21, 2021 at 21:27)
@betsie: you might want to watch some races... T Piddy was nowhere near MvDP's level. Cross was all about Van Aert and MvDP battling and XC was all Nino and MvDP. And the road isn't even close at this point. Settle down with the fanboi action.

betsie (Aug 22, 2021 at 1:08) (Below Threshold)
@badbadleroybrown:
Calm down and put the history book back on the shelf.
Now is about now/2021 and only 2021.
It's not about previous years.
Not a fan boi at all btw, just recognising someone in good form now (might not be the same next year, who knows).

Best thing about pinkers is they love to dig up old stuff to devalue today's stuff that they don't like.

badbadleroybrown (Aug 22, 2021 at 1:14)
@betsie: Weird way to say you don't know what the f*ck you're talking about and you're just fanboi'ing on the hype from a handful of races this year but whatever...

Bonus dumbass points for assuming I don't like Pidcock. 2-2 in making yourself look stupid, well done.

betsie (Aug 22, 2021 at 2:34)
@badbadleroybrown:
Such a childish comment and you can't even read.
I only quoted results from this year.
Try racing one day, you might understand.

Never said you don't like Pidcock, go learn English and come back once you have.

sspiff (Aug 22, 2021 at 7:50)
@betsie: well then why are you mentioning being dominant in cyclocross when the most recent race was like 8 months ago?

badbadleroybrown (Aug 22, 2021 at 9:18)
@betsie: I agree, your comments are childish... and ignorant. Even looking at this year alone MvDP has been much more successful than Pidcock and its not even particularly close.

But since you don't know wtf you're talking about and your experience is limited to watching one Olympic race and apparently fanboi'ing at maximum level over it, you don't know that. Grow up.

badbadleroybrown (Aug 22, 2021 at 15:54)
@betsie: Tell me more about how you don't follow either rider but got fired up watching the Olympics.

Fired up... Pmsl, you crack me up. Calm yersel doon. You seem to get affie excited a little easily.

betsie (Aug 23, 2021 at 7:25)
@FisherFreerider: yup, I said he has dominated Cx.
In XC (which this is about) they have limited time against each other.
Pidcock was on form in the first half of the year (well, was for the Olympics, but we don't know what his training is like after then for worlds).
Who will win worlds... we will find out soon enough.

CustardCountry (Aug 21, 2021 at 12:44)
A prime example of why you should ‘look before you leap’. Or at least pay attention in the course briefing and do your homework first.

mtb-jon (Aug 20, 2021 at 21:33)
Would he really be able to defend his title tho? One would imagine that a mountainbike world championship would include a drop or two!

Quite intesting how this regurgitation of 'news' works. Van der Poel went to Livigno for his training camp on the 3rd, so allmost 3 weeks ago. He then broke that off and went home. Some news about that emerged on the 14th and then somebody talks to the national coach (who put him in the worlds squad on the 16th) and his team director (who expects him to race a road stage race of a week next week, if all goes well).

Then snippets of those quotes start to emerge from website to website and days later that brings us here. So what does that tell you about the current situation? Nothing.

If you read this news bit, which isn't first hand knowledge to begin with (it's his national team coach!), you get the impression there is a big problem and a lot is uncertain. Maybe that's still valid, but so many days have past that it makes me laugh a bit.

mi-bike (Aug 22, 2021 at 14:16)
@jeroenk: They seemer to have timed the post very well as it came one day before the official announcement of his withdrawal.

jomacba (Aug 20, 2021 at 17:03) (Below Threshold)
@billreilly: You could be absolutely right!!! Your also probably a bit hypersensitive.
Injuries are a part of the sport, I have had my fair share. To be honest with you, I suffered a major lower back injury at 24 years old which took me nearly 7 years to recover from. If anybody understands it, it's me... However; in life we are faced with many obstacles and challenges, most of which are superficial. Every once in a while your faced with a major event. It's these moments that help define our true grit in character. Sometimes the best way to overcome these events is to laugh it off like it's nothing and push through it.
I made the choice to take a comical "walk it off" approach because sometimes that's what people need to here. You may not agree with me, and that's okay because your entitled to your opinion. But I tell you if that was me, the last thing I'd wanna hear is "poor you" and "are you okay". I wanna hear somebody to tell me to get my ass up, brush myself off, and get some. Just my two cents.