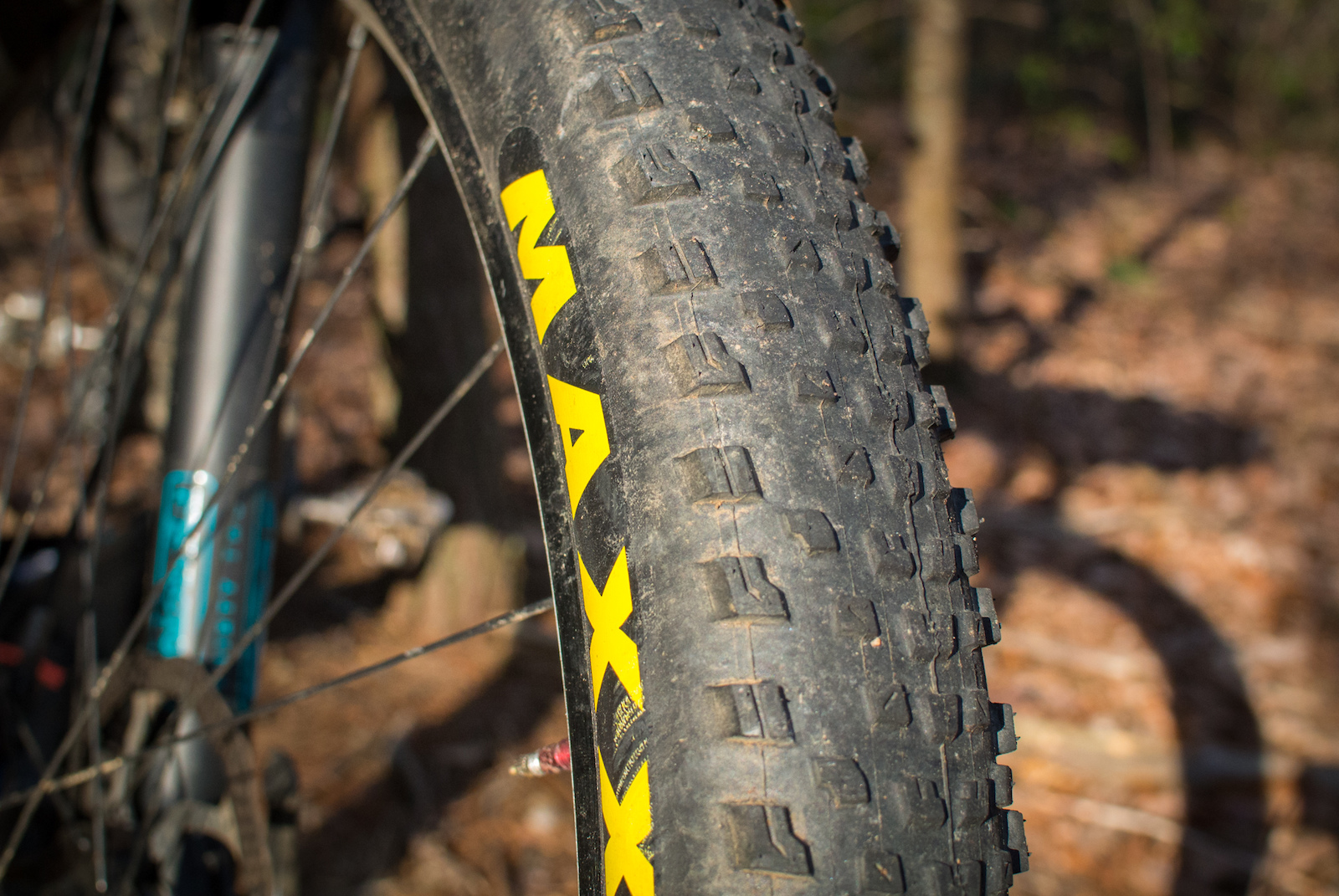 Maxxis has a strong XC heritage with tires such as the Larsen TT, Crossmark, Aspen, and Ikon all holding a strong spot in their line-up throughout the years. There have been semi-slick variations, such as the Larsen Oriflamme and the Wormdrive as well. While those minimalistic versions did roll fast, according to Maxxis' racers and engineers, they didn't offer the traction needed, especially on modern and more technical XC courses. Teams were requesting a higher volume tire that had a low profile tread, was fast rolling, and offered decent cornering.

The solution is their new Rekon Race, the lowest profile tire in the XC line from Maxxis. Maxxis expect the tire to be used primarily as a rear tire and paired with an Ikon, Aspen, or something similar up front. Maxxis engineers went to the 2017 Mont-Sainte-Anne XC World Cup with tire samples for Nino Schurter to try out. Apparently, Schurter was confident enough in the design and performance that he decided to race on the tire after practicing on it. Schurter won the race on the prototype. 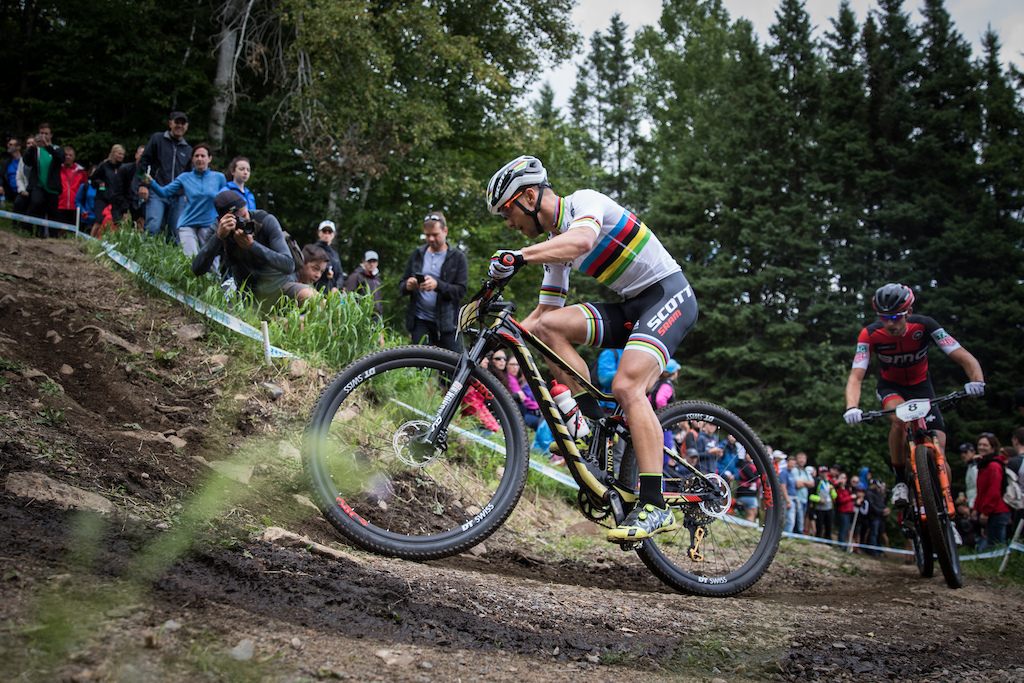 The Rekon Race is based on the tread pattern of, you guessed it, the Rekon. All of the knobs are scaled down, and the leading edges are ramped to reduce rolling resistance while the back edges are flat for increased braking power. There are small transition knobs from the center to the cornering knobs, and all of the knobs are siped to give more surface area and traction.

The tire is available exclusively in a 29x2.25 size with the same 120tpi casing that the Aspen uses. The tread is a dual compound rubber, and all tires are tubeless ready. The Rekon Race is offered with and without the option of the Maxxis EXO sidewall protection, depending on how much you like living on the edge, or standing on the edge of the trail fixing a flat. With EXO, it weighs 670g and sells for $64 USD. Without the EXO protection, the tire weighs 610g and costs $60 USD. 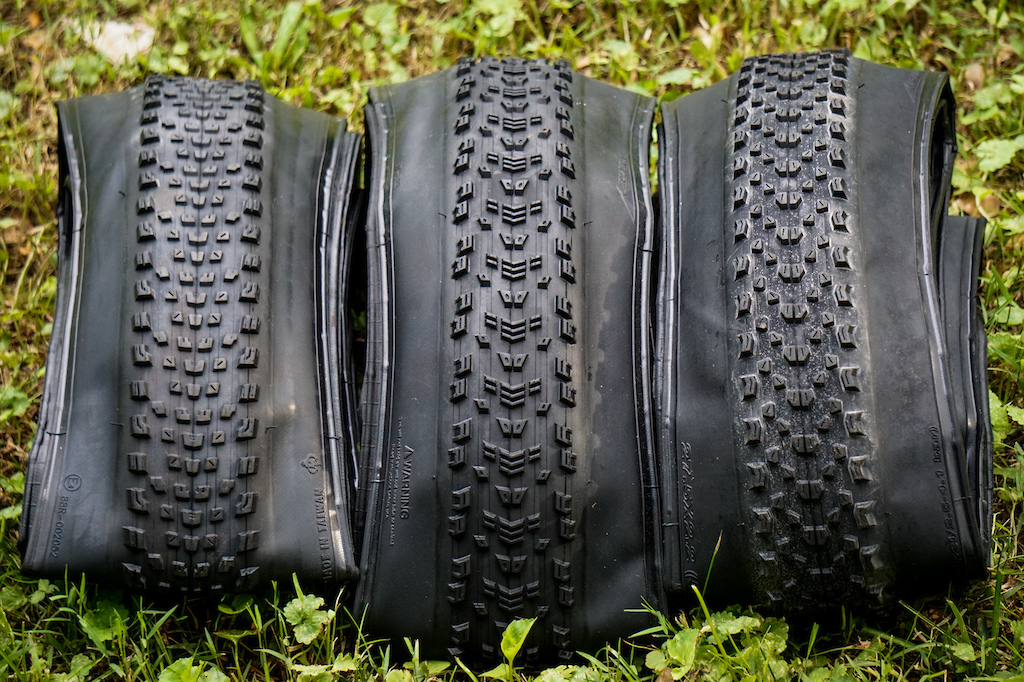 I spent a short amount of time riding the Rekon Race near Sun Valley, Idaho, this past week. While it was hardly enough to give more than a very initial impression, I made enough turns to get a feel for it. I had the Rekon Race as a rear tire paired with a Rekon on the front of the bike I was riding. The trails that I rode were smooth and fast singletrack... completely buff, with a few rocks and roots. It was still early season there, so the trails had a great deal of traction. I wouldn't call it hero dirt; it was still loose, but it wasn't typical late-summer moon dust, either.

The tire felt noticeably fast. It seemed to hold its speed both uphill and certainly downhill. Braking, it was substantially easier than Maxxis' other XC tires to break loose and slide into turns on top of the tread. Once I gained some confidence in it and leaned it over at speed and in off-camber terrain, I was impressed with how well it hooked up on the side knobs. I felt that the tire was very predictable and easy to push in turns when on the edge without fear of breaking it free. 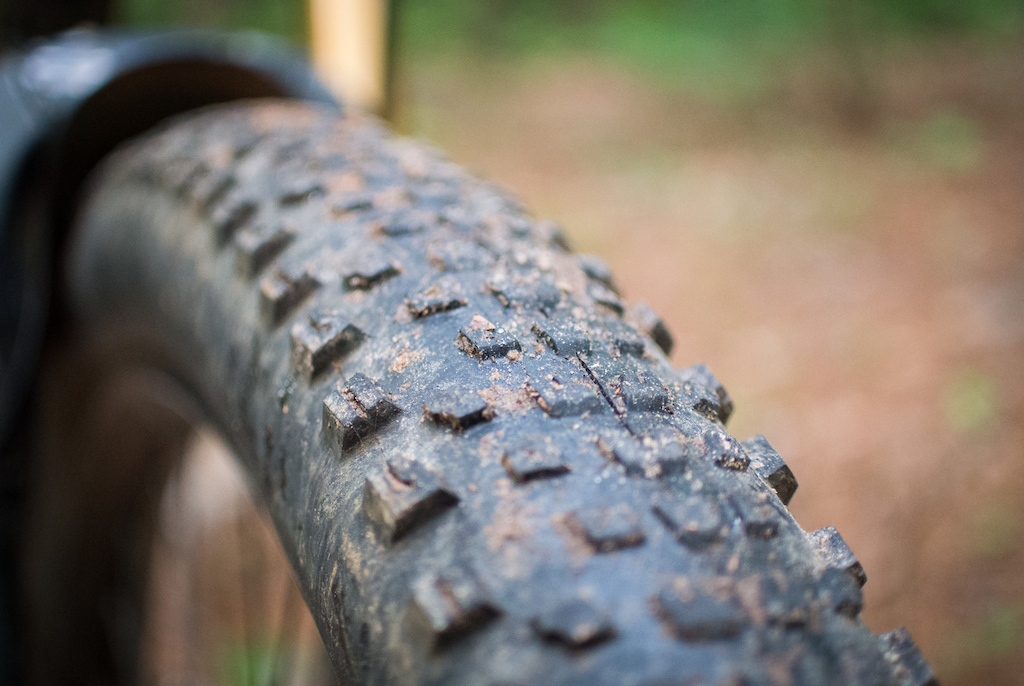 Braking traction was decent for a semi-slick. Scrubbing the extra speed that the tire seemed to offer up on the descents took a little bit more planning and precision, but it's a semi-slick, so it should. I had no issues with punctures or flats and also didn't hear of anyone else riding the tire having problems, either.

msusic (Jul 4, 2018 at 1:23)
These tires should be in their own category. Not XC, AM, Enduro or whatever but PreWorn. Why have a brand new tire with 100% of thread when you can pay more to have less of it and that your brand new tire can look like it was ridden for 1000km before you bought it.

Next stop forks with loose bushings and no bath oil in them, oh wait...

jbgogolf (Jul 4, 2018 at 10:10)
The difference between a tire like this and your old worn down tire is the knobs will still be sharp edges and not rounded down. You’ll get more bite than a used up tire. Plus this is race specific...

kilz (Dec 31, 2019 at 14:32)
What a dumb comment. I've raced two entire seasons on tires you'd probably consider to have looked like they were ridden for 1000km. Stick to walking your bike up hills.

jesse-effing-edwards (Jul 4, 2018 at 4:49)
Don't race people like side knobs? I know guys like Nino can shred on slicks, but so many less accomplished racers must be terrified when riding fast into turns or anything remotely gnarly - that or they just live for the long smooth climbs.

WAKIdesigns (Jul 4, 2018 at 10:10)
@mr3z: I happen to greatly enjoy riding my DJ HT in the woods on our rough trails. Some ride street on DH bikes - in politically correct terms this is called acquired taste. There are no medals for this and nobody cares.

jzPV (Jul 4, 2018 at 5:05)
@Minikeum: That surely will be coming. I'd even take one of the lighter casing tires with maxxgrip as my maxxterra minion on the front holds up ridiculously long...

Never DD on an Assegai...

landscapeben (Jul 4, 2018 at 6:47)
"The trails that I rode were smooth and fast singletrack... completely buff, with a few rocks and roots. It was still early season there, so the trails had a great deal of traction. I wouldn't call it hero dirt; it was still loose, but it wasn't typical late-summer moon dust, either."

Cambot (Jul 5, 2018 at 6:52)
@neologisticzand: Where did you find a 2.4 rekon? I’ve been looking for a while, Maxxis has really been taking their time to get supply to market. Seems like Pivot took some early production for the new 429.

Maxxis (Jul 5, 2018 at 7:54)
@seanypMTB: sorry, at least for now we're just offering this in a 29. Our XC race teams that requested this type of tire are overwhelmingly running 29.

Kramz (Jul 4, 2018 at 3:09)
Personally that looks like the perfect tire for 99% of people. I rode Maxxis Hookworms for a long time, and they were perfect, except for the odd time you hit a mud patch, or something gnarly. Those look perfect, smooth rolling, but you won't die on a rough patch. As good as you're going to get.

headshot (Jul 4, 2018 at 3:39)
Actually, no, unless you run exactly the right pressure and pay very close attention to your speed and body position, you will die in a "rough patch" , i.e a loose corner.. That being so, these tyres are not what 99% of the riding population should be on, rather its what the top racers and experienced riders should be using.

nozes (Jul 4, 2018 at 3:40)
For the hardpack typically found on well-worn XC race courses it's a sure bet. Tall knobs get too squirmy under hard braking or cornering on hard surfaces.

RecklessJack (Jul 4, 2018 at 4:02)
Oh i just use something stupidly overkill on the front and something fastrolling on the rear. Sure it rolls a bit slower but thats a non issue when not using strava or when you dont race. It rails corners. That and these things likely wear out faster.

nfontanella (Jul 4, 2018 at 4:59)
Imma guess that you ride exclusively hard pack flow trails when it's dry

davidccoleman (Jul 4, 2018 at 11:25)
Maxxis was overdue for a traditional XC race tire, Ikons are dated and no bueno when compared to most of the competition.

ka-brap (Jul 4, 2018 at 0:41)
Just from looking at the picture, the side knobs are differently shaped and the height of the central treads is quite lower. Whether or not that means a lot to you is a different question.

danielsapp Plus (Jul 4, 2018 at 8:13)
The knobs are quite a bit shorter in the center and it rolls faster than the Ikon.

Maxxis (Jul 5, 2018 at 7:58)
As @danielsapp mentioned the knob heights on the Rekon Race are substantially shorter. Over half a mm on the center knobs and a full mm on the side knobs. It's much easier to see the difference in person.

nug12182 (Jul 4, 2018 at 5:05)
These tire SUCK if you ride even a liitle bit hard.My buddy destroyed 3 of them within 4 rides and used like 7 of my Dynaplugs while doing it.Can a company please make a 2.8 tire that will last?!Im sick of wasting time with blown tires.

On a serious note though, this is a different tire than the 2.8 Rekon. I too experienced some ripped sidewall and tread with back to back 2.8” rekons. If you bought them local, your shop will replace them. I swapped to the 2.6 version and got a bit better life, still not going to last 300 miles. Try a 2.35” TRS. Leave it at 50psi overnight before setting it to rider pressure and it will be bigger than any 2.8 that isn’t a Schwalbe. Rolls a little slow but the grip and the ride are among the best out there.

- standard answer to any plus size tire complaints