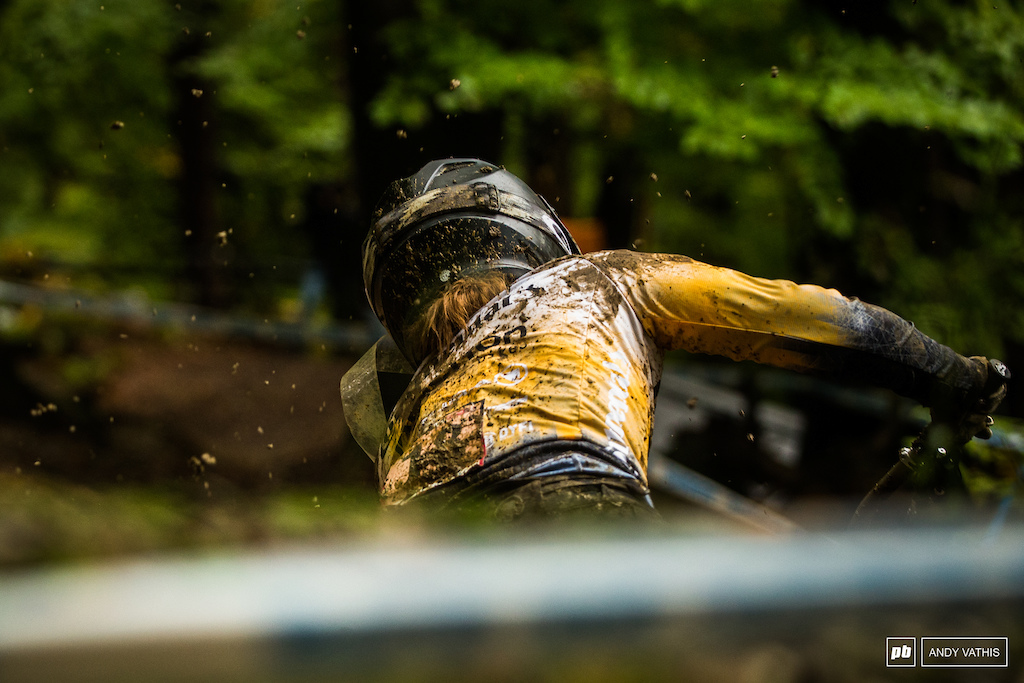 Mille Johnset has announced on social media that she will be missing the rest of the racing in Maribor after a nasty crash during yesterdays round 1 finals.

The crash happened during Mille's finals run in the treacherous rock garden, after trying to ride this morning Mille has decided that she doesn't want to risk another crash or any more injuries. While she is sitting out racing in Maribor, she hopes to be back up to speed for the final two World Cup rounds in Lousã.

We're wishing Mille a speedy recovery and hope to see her back racing in Lousã.

alexridesbikes-13 (Oct 17, 2020 at 5:20)
Seriously, getting up after that crash was impressive, and finishing the race even more so! Good decision on her part to sit this one out. Better to be safe and ready for Lousa in a few weeks. That being said, dear loard my fantasy league is going to shit hahaha. First Reece, now Mille...

nickyz (Oct 17, 2020 at 5:16)
Poor thing, the race audio sounded like she was crying while finishing her run after that huge crash. Rest up!

Puddings (Oct 17, 2020 at 5:13)
On her IG someone asked the question whether she had been knocked out due to the way she ragdolled and she answered that she was not sure. Wise decision to sit out, especially if there is a suspision of concussion - hopefully it is one her team and sponsors support

korev (Oct 17, 2020 at 12:39)
I hope so too. I was impressed how Trek reacted after Reece Wilson's crash the other day. In this scenario it would be so easy for a sponsor to force the rider back on their bike

Chief2slo (Oct 17, 2020 at 5:32)
She looked pretty disoriented and confused when she got back up, I was surprised she got back on her bike and was still faster than me! Looking forward to seeing her race in Louisa!

dudeism (Oct 17, 2020 at 7:56)
@mfoga: Yeah track marshalls shouldn't really let riders go on after going through a rock garden on your face... You can't blame the riders because they want to finish their run no matter what and are full of adrenaline.

markyp1965 (Oct 17, 2020 at 9:53)
Not surprised that she’s sitting out the second race, that was a pretty hard slam she took and it clearly shook her up for the remainder of her run.
They’re made of tough stuff, these racers.

steinbex (Oct 17, 2020 at 6:02)
Can anyone tell me what the tape is that came off the back of her helmet? I saw Tracey Hanna's crash the other day and saw the same thing?

GrandMasterOrge (Oct 17, 2020 at 6:05)
Roll offs for goggles - like a rolled tape alternative to tear offs you pull across on a ratchet mid-run. Doesn't litter the woods like tear offs do (well unless you crash and it flies out everywhere I suppose).

takeiteasyridehard (Oct 17, 2020 at 6:48)
Wow. Glad she was relatively OK after that one. Hard slam and not the smoothest terrain to slide belly first down...seems she got pretty lucky.

Medacus (Oct 17, 2020 at 12:32)
Man, you got to laugh at downvoters lol, do they even know why they are downvoting? When I watched the race I seen the crash that Mille had and thought to myself that I wouldn’t be surprised if she chose not to race on track 2 because that was a hard crash, thankfully I was right as her health is more important than any race! Is that a bit easier to understand?

lafayettebiker (Oct 18, 2020 at 1:38)
@Medacus: lol yeah, and people are downvoting regular comments saying "congrats, she's so tough." There's a weird bitterness from some people and you can see it now that the votes are all shown.

gramboh (Oct 17, 2020 at 10:36)
Absolutely brutal crash, felt for her watching the live stream. She’s tough as nails for riding the rest of the track wow.

what a tool. I hope put him right and told him it's in Greece.