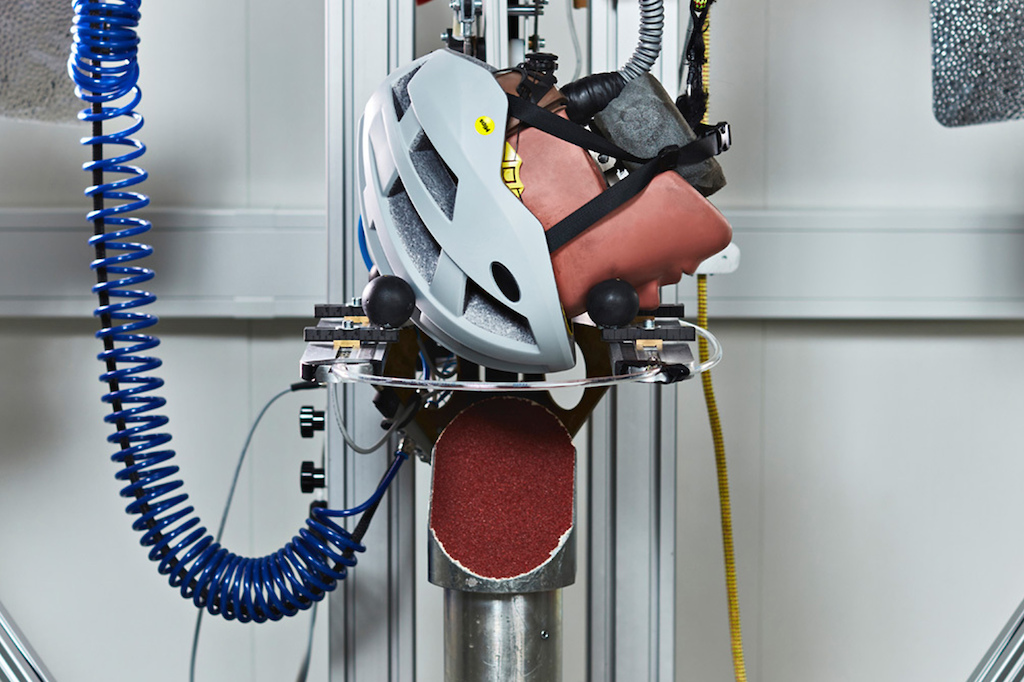 MIPS has announced a new Finite Element Analysis tool that it claims to be the future of helmet development.

Finite Element Analysis is a computer simulation that is often used to analyze the strength of complex structures in real-world conditions. Finite Element Analysis can help a designer investigate potential changes in cost, weight or manufacturing to allow brands to be more confident in a design before undertaking any expensive or destructive test methods.

For helmet testing, MIPS has created a computer model of the human head and brain that will feature upwards of 50,000 elements that can have acceleration pulses applied tocthem to document the strain in each one. MIPS will use this to predict the helmet's response to both standards testing and real-world impacts. 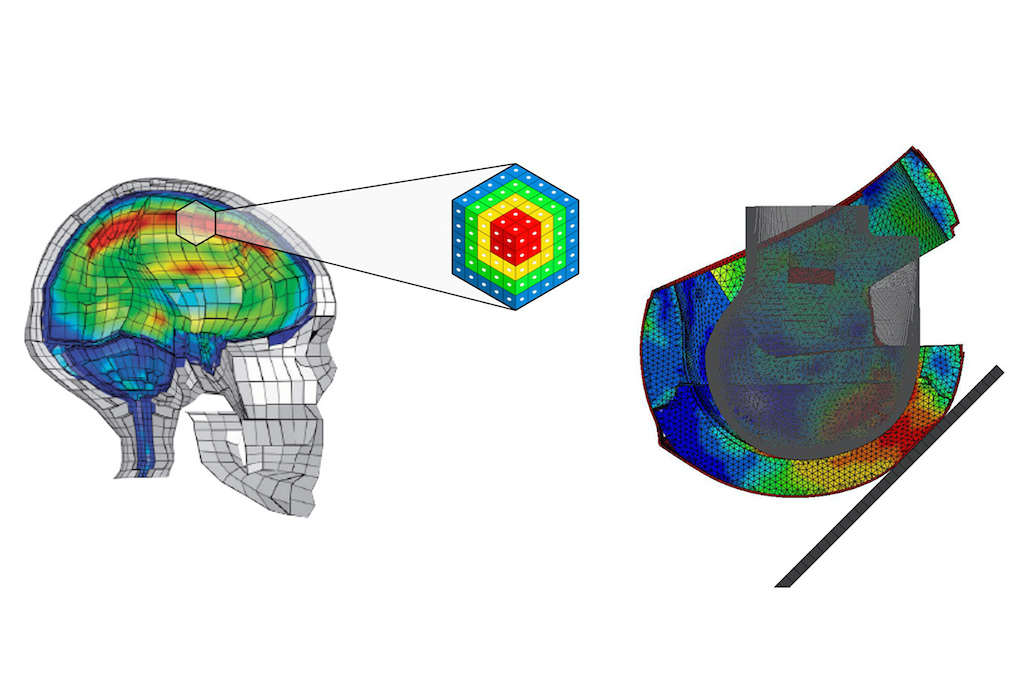 The new tool from MIPS should allow brands to cut down on the cost and duration of testing as they can virtually trial designs using CAD files rather than physically creating prototype helmets. Finite Element Analysis should also help cut back on product waste as there will be fewer design iterations, re-tooling and consumed materials.

FEA's use for helmets isn't necessarily new for MIPS, with the foundations of the brand's' slip-plane technology forming after Hans von Holst, met with Peter Halldin and Svein Kleiven at the Royal Institute of Technology in Stockholm, Sweden, who had access to one of six Finite Element Analysis models of the human brain at the time.


MIPS will be offering brands its virtual testing service where helmets can be compared and tested in accordance with a wide range of standards. The first testing standard to utilize the FEA testing method will be ECE 22.06, which includes testing for rotational motion.

You can find out more here

skeeple (Nov 13, 2020 at 12:24)
No to detract- this is potentially a good thing by a company proven to advance helmet safety, but this a product not really a safety advancement.
As a design engineer I use FEA pretty quickly/easily on anything that might have a load on it - so guarantee anybody making helmets already does some type of simulation. Only now it sounds like MIPS is creating a standard simulation set-up - analogous to standard tests for say DOT or ASTM certifications. That little yellow emblem is becoming more like the organic sticker at grocery stores - it just means it meets a standard set of requirements tested/verified in a consistent matter.
So again, probably good, but it is a marketing strategy / product.

tbev (Nov 13, 2020 at 13:24)
Yeah its a product, but also as a design engineer, you (in general, not you specifically) shouldn't underestimate FEA as a cost savings tool. Lots of smaller companies can not afford rigorous physical testing or the creation of iterations of tooling. I dont know what they will be charging to run tests, but I bet it helps smaller companies bring safer products to the market.

dirktanzarian (Nov 13, 2020 at 13:41)
I think what they have made is an FEA of the brain/skull to map the impacts of helmet design on forces within the skull, not an FEA program for helmet structure.

Svinyard (Nov 13, 2020 at 17:04)
@dirktanzarian: Yeah they have built the "model" for the simulation. Not the same as just running your helmet assembly through Creo's quick FEA. A hardcore, deep FEA analysis will often take a hell of a long time to model, let alone model it properly (lets say in ANSYS) and then it'll run for a couple of days on a server stack setup just for that. That level of FEA is likely what's happening here and not the quick/dirty FEA check that's built into CAD tools these days.

gcrider (Nov 13, 2020 at 23:50)
And there model will most likely be made from data using sensors placed in cadaver skulls for testing @dirktanzarian:

matt-15 (Nov 13, 2020 at 11:21)
As someone who has had three concussions (only one of which while biking), I think it's great to see all the effort being put into helmets these days to make them safer

dldewar (Nov 13, 2020 at 12:51)
Be careful. Just because you are using FEA does not mean that helmets will become better. “All models are wrong”. Also I love the PC saving the environment angle. It can save costs as long as you have a model that works. But I am sure that busted prototype helmets are not the tipping point for the threatened global climate change crisis / apocalypse.

k-n-i-x-o-n (Nov 13, 2020 at 13:29)
If you read the press release at the link to the MIPS site, you can see that they are just offering FEA to other brands as contract engineering, just like any other contract engineering house would offer. The only benefit to using MIPS is they have a head model and constraints already set up.

They don't even include what software they use so it's unclear if their FEA is junk (Solidworks FEA) or a powerful non-linear solver (Abaqus).

I'd be shocked if any helmet design companies weren't already doing FEA in house or sending it to a contract engineering firm already.

iiman (Nov 13, 2020 at 12:39)
they could as well use headforms with scalp and hair in their simulations, for starters

ilovedust (Nov 14, 2020 at 6:17)
Im quite comfy that my hair is as good if not better that mips as its full coverage, a bit too long and thick. As a total bonus, it does not creak like the MIPS in my spesh road helmet and my Bell motorbike helmet.

m9lee (Nov 13, 2020 at 11:36)
I wonder how many helmets could have been sent back for analysis after a crash, rather than doing irrelevant tests in the lab. Seen plenty of drop tests with scary as stats that don't translate to real life.

lewiscraik (Nov 13, 2020 at 11:53)
The thing is, post crash there are so many unknown variables. In a lab you can control everything, so you can understand what changes to your design make, or indeed how the helmet behaves with changes of environment.

In a lab. You can test a specific impact on a specific part, and I agree. Initial design, fine. But that fact that crashes vary so much means that you are only actually testing such a small range of the possible types of crashes available to a budding MTB rider. If you got all 5000 giro whatevers back that were crashed in. And then you categorised them, direction of impact etc... Plotted it against damage..... Or whatever you wanted to investigate. Its a aspect that isn't being looked at and I think should be

SolyXC (Nov 13, 2020 at 12:34)
Some good info could definitely be gained from post crash material analysis but I agree with @lewiscraik that any test comparisons need to possess a solid set of control mechanisms in place to reach supported conclusions. Re-testing of helmets post IRL crashes would be somewhat cool 'exploratory' data but have little benefit to updating design. An exact crash scenario data set would be required to understand how the damage occurred. If helmets were sold with integrated sensors that collected data at all times, revisiting crashed helmets could hold more greater merit. Could be a cool direction for improving helmets in the future but cost and having to constantly charge/upload data after rides may be too much of a hassle for people.

corporaltedbronson (Nov 13, 2020 at 20:06)
@SolyXC: sensored helmets would be pretty neat for WC racers. Expensive, but maybe with enough context from footage of the crash they could make some meaningful insights.

gbcarmona (Nov 13, 2020 at 12:23)
When you look and research about helmet protection, the Koroyd system seems to be much better than the usual helmets and hard to ignore...matched with MIPS, looks like the best way forward!

watt95 (Nov 13, 2020 at 13:04)
This is really cool to see. I doubt this was as easy as some may think it is. Figuring out how everything behaves together in a non-linear, dyanmic environment is challenging, but I can imagine throwing into the mix how brain matter behaves complicates things a whole lot. Also you are dealing with helmet materials that permanetly deform and the like. Finally, I can only imagine how many simulations were tested and failed due to non-convergence or the results were not acceptable. Simulations can take a whole 8 hour work day to process if not more so that's a lot of time waiting to find out if you created your simulation correctly or not.

trailrocket (Nov 13, 2020 at 14:24)
It is really cool to see the development of such tools. This could also potentially enable engineers to use optimization algorithms to find better shapes and materials for helmets. A big problem of these models is still the lack of appropriate material parameters of human brain tissue that is not that easy to come by for experiments.

gcrider (Nov 13, 2020 at 23:31)
They use cadavers with their hair cut short. They cut small holes through the cranium to place sensors under the bone and are then sealed off and held in place with bone screws. They also reconnect the major blood vessels s to maintain the appropriate imtracranial pressure.

SolyXC (Nov 13, 2020 at 12:24)
That's mind blowing FEA hasn't been a highly used tool for helmets until now... I really hope it has and brands just haven't used it to market product. It should be/have been a widely employed testing method by now. Seems like a no brainer

gcrider (Nov 13, 2020 at 22:17)
You probably don’t.
But thankyou to all the selfless people and their families who donate there bodies in the name of science.
Which makes our helmets safer ( and cars)