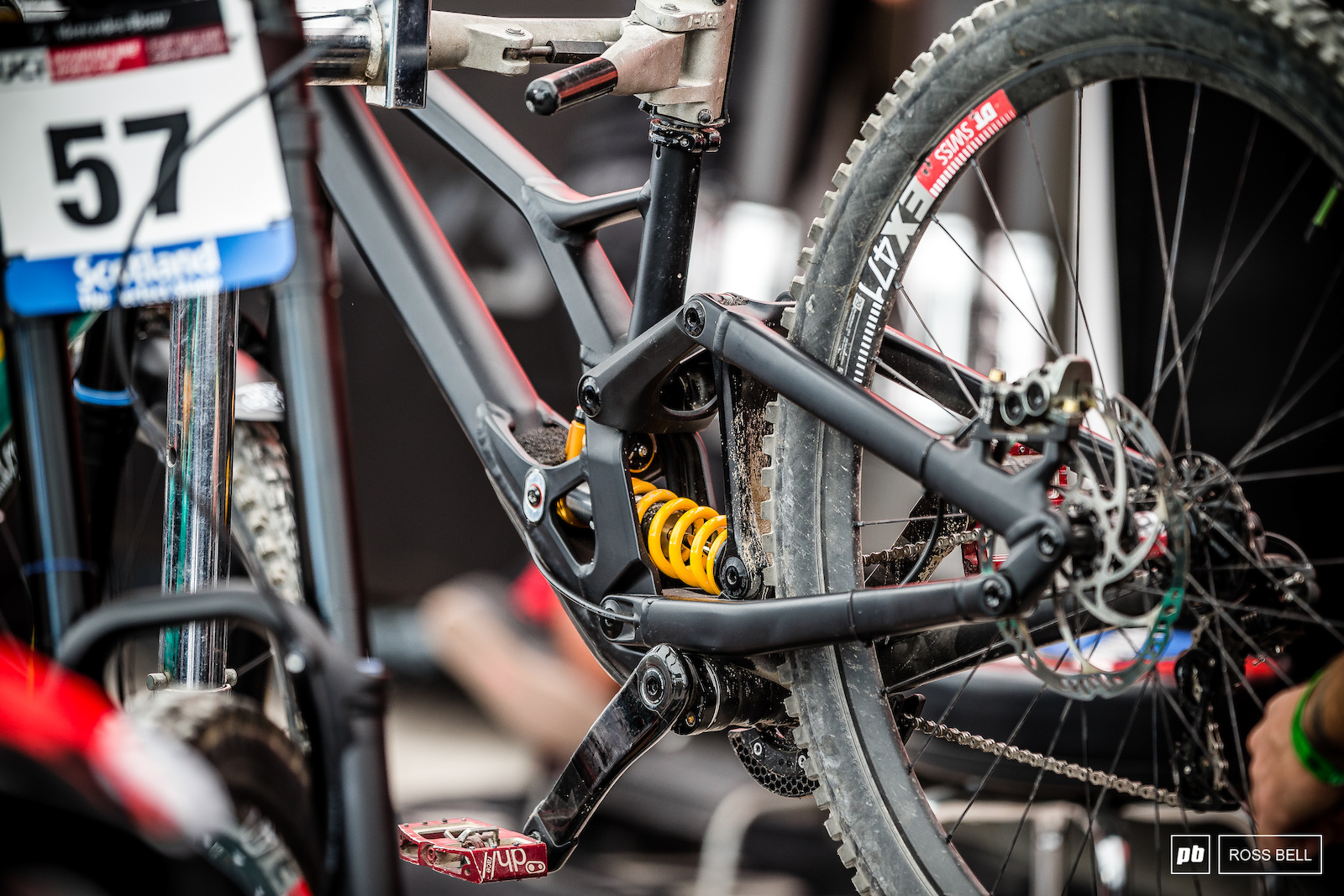 The Fort William downhill track is a brutal one, with a surface that looks like a cobblestone street after an earthquake. Specialized's Miranda Miller will be taking on the high speed, rock-riddled course aboard a 29”-wheeled prototype, the same bike that we first caught a glimpse of at the Whistler Bike Park last week. Loic Bruni and Finn Iles will be sticking to their 27.5” Demo races bikes, but I'm sure they'll be spending time on this yet-to-be-released machine in the near future.

The frame design is a distinct departure from the current Demo – it's no longer one-sided, and there's also no concentric bottom bracket pivot to be seen. Instead, the shock is driven by a vertical link that's attached to the seat stays and a horizontal link that's attached to the main pivot. The design keeps the shock positioned close to the bottom bracket, which should keep the bike's center of gravity nice and low. 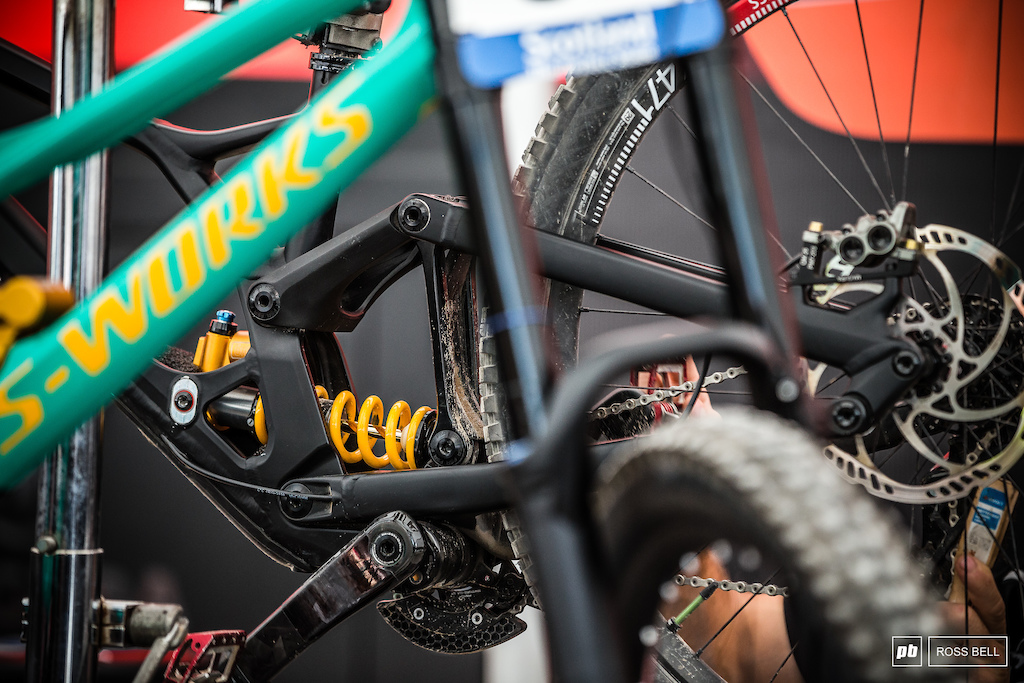 The shock position, bottom bracket height, and chainstay length can all be adjusted on this prototype aluminum frame.

The concentric BB pivot may be gone, but it does look like an eccentric bottom bracket has been installed, although I doubt that's something that would make it into a production model. Eccentric bottom brackets are more typically used to adjust the chain tension on singlespeed bikes without horizontal dropouts, but they can also be used to adjust a bike's geometry – the BB height and chainstay length can be altered by rotating the device inside the bottom bracket shell. Miranda's bike also has what looks like a flip chip at the front shock mount. It's currently in the middle setting, but I'd be willing to be that there's a high and low option as well, at least for this particular frame. 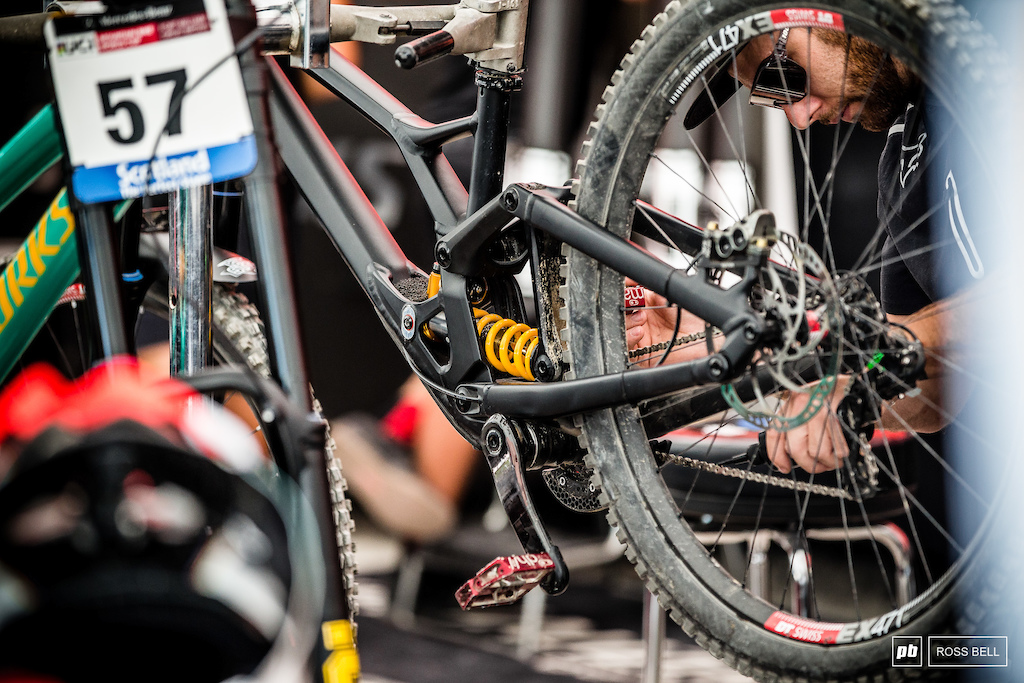 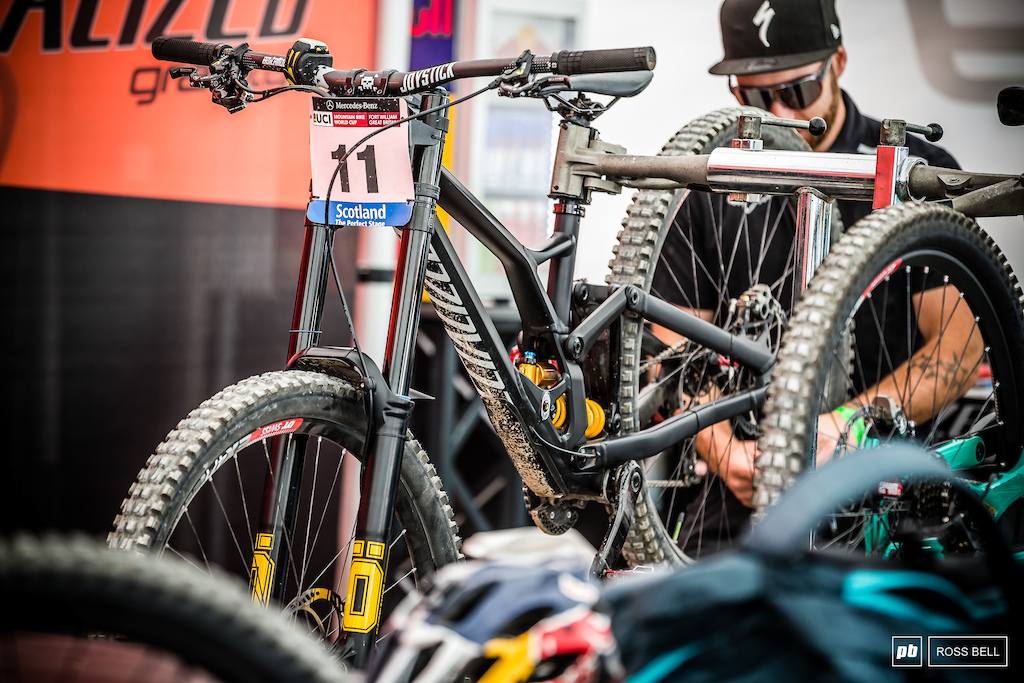 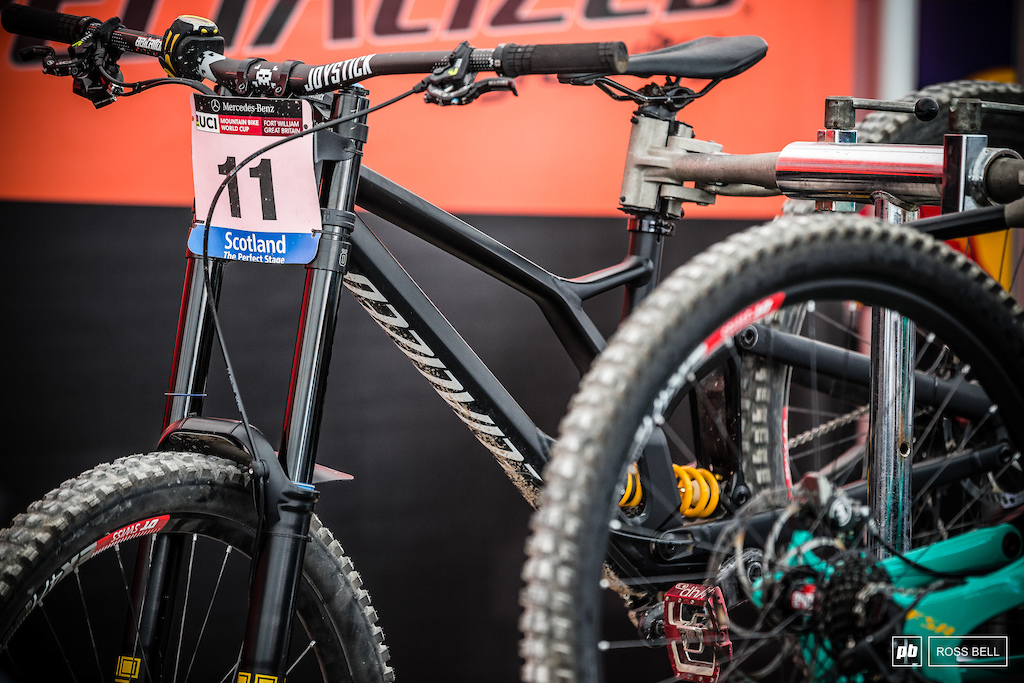 The Fort William track hasn't been very kind to Miranda - will this be the year she gets redemption?

BenPea (Jun 1, 2018 at 11:56)
Really looks like a bansheebikes.com/legend
but with a CS pivot. They're f*cking with us now. Asymmetric one is amazing. What's happening?

Fix-the-Spade (Jun 1, 2018 at 12:54)
A banshee that got beaten with an ugly stick, then thrown out of the ugly tree in the height of summer when the branches are most dense.

endurocat (Jun 1, 2018 at 13:42)
One Specialized Rep told me that the kits, colors and decals for the bikes had been ready for the last 6 months and it was a prototype more than a year ago.

Squeakybb (Jun 1, 2018 at 18:08)
Yep! First thing in thought of was my Legend. I went to angelfire bike park last weekend and rode a new carbon V10. That bike had nothing on my Legend! Best downhill bike I've ever ridden. It's amazing!

gnaralized (Jun 1, 2018 at 20:07)
No, it looks like a Knolly : it’s a FSR with a shock linkage independant from the 4-bar linkage that connect the rear axle to the frame, i.e. shock is not directly linked to the 4-bar element.
The banshee is a short-link (aka VPP) kinematic with shock operated directly by the lower linkage.
I wonder if knolly will sue them ????

jclnv (Jun 1, 2018 at 23:29)
@gnralized: The shock linkage is nothing like a Knolly. A Knolly simply uses an in-line extension to drive the shock between two similar links. This design is using the seatstay to pull a link that is attached to the shock with another link attached to the frame behind the BB. Quite ingenious if a little complex.

gnaralized (Jun 4, 2018 at 14:30)
@jclnv: No you're wrong that's exactly the same.
1. "A Knolly simply uses an in-line extension to drive the shock between two similar links"
Not true, on Knollys (obvious on podium and v-tach, a little less on warden, endo, delirium) the shock is driven by a rocker, which is pushed by a floating link between the seatstays and the rocker, which forms a secondary quadrilateral (frame-shock rocker-floating link-upper fsr link) hence the 4-by-four name from Knolly.
Since the the "floating link" has a pivot on both ends (seatstay and shock rocker), it doesn't behave like a rigid extension of the seatstays so the amount of rotation and angular velocity of the 4-bar quadrilateral is different than the one transmitted to the shock rocker by the secondary quadrilateral. In this it is close to Evil delta system, but on a 4-bar kinematic.
That's exactly the same layup as on the new spesh, except the secondary quadrilateral is inscribed inside the fsr quadrilateral for the spesh, and outside for the Ks.

jclnv (Jun 4, 2018 at 18:19)
@gnralized: Great reply. Not sure I can get my head around all that without viewing the frames side by side, but I'm with you on the independence of the shock linkage from the suspension (IC).

WAKIdesigns (Jun 1, 2018 at 14:42)
@thestraightline: erm no and no. Keene was riding Grids and this is a freaking Minion DHF. I know because I have it on my bike and shitty Butcher hangs on the wall to be sold. Both Keene and Graves deserve utmost respect to ride Spec tyres instead of Maxxis

thestraightline (Jun 1, 2018 at 15:05)
Erm yes. You are wrong. Grids is the only option we have in the store yes, but they have been running dh casing on both the butcher and the hillbilly for a while in 29 2.6 @WAKIdesigns:

thestraightline (Jun 1, 2018 at 15:08)
The butcher is based on the dhf, as many other tires these days. The butcher has slightly shorter center knobs and with a bit more space. To me it works in between the dhf and the dhr 2@ka-brap:

WAKIdesigns (Jun 1, 2018 at 22:41)
@thestraightline: there is no comparison between these two tyres no matter how similar they look. minion DHF in maxxgrip kills Butcher for breakfast. Minions in hard compounds beat most soft tyres of other brands. The only tyres that challenge Maxxis are Bontragers. Whenever I am trying a different tyre I’m like ok, maybe. Then back on Minions or Bontragers and I feel like I wasted my time. Schwalbes come very close but they lack all out dh all round tyre since Magic mary is too squirmy.

Sugarbrad (Jun 2, 2018 at 0:44)
@thestraightline: both the Minion and Butcher had the same tire engineer. He worked with Maxxis, Specialized, then Michelin. One of the nicest and fastest dude on the planet.

thestraightline (Jun 2, 2018 at 8:56)
You can argue that dhf is a better tyre, but I’m merely pointing out that the big S obviously has 29 tires with dh casing on offer for their riders @WAKIdesigns:

iamamodel (Jun 1, 2018 at 17:16)
Didn't you hear? Specialized wanted to show him the Demo's geometry wasn't lethal, so they sent him one to try. He was taken to hospital that afternoon and should be out of traction in a few months.

blakemoss (Jun 1, 2018 at 11:47)
Looks like they went backwards with desing not forwards, the current demo looks way better

scott-townes (Jun 1, 2018 at 12:08)
It doesn't seem like a great idea swapping over to a prototype between WC stops but then again its been 32 weeks since Croatia so she is probably used to it by now.

ka-brap (Jun 1, 2018 at 12:31)
I personally like the current Demo's aesthetics better too. This proto definitely has a lot of cues from the previous design. But if this just rides better than so be it.

1armbandit (Jun 1, 2018 at 11:54)
Sweet ride, love the suspension bits. That front fork is sick with those Ohlins stickers, thanks for the post. Now if any one spots a updated 2019 Specialized Enduro. Make sure you post a pic.

jaame (Jun 1, 2018 at 20:21)
Wow this prototype turns up with real photos where you can actually see something, so soon after those spy shots.
Who would have predicted that?

bigburd (Jun 1, 2018 at 12:20)
Yeah this is confusing, it looks like the shock is connected to that link that comes down from the upper seat stay pivot, and it looks like a pivot on the same link right where the shock mounts to it. We need more close up of that area.

zyoungson (Jun 1, 2018 at 19:39)
Concentric BB is interesting, would be good to see this on a production bike, maybe a big flip chip with fore / aft settings ?

the-burd (Jun 2, 2018 at 19:10)
People keep saying this bike looks like a banshee. But it has a totally different linkage disign. Pretty unique as far as I can tell.

Noname13 (Jun 2, 2018 at 22:10)
Miranda will kill it! , no problem all you Diamond head wanna be riders stay home Squamish is busy move along to your bike park in whistler.

gonecoastal (Jun 1, 2018 at 12:49)
I hope Specialized gets sued for patent infringement on this one.

dannyhuber (Jun 1, 2018 at 14:00)
Looks like a Banshee crossed with polygon!
Below threshold threads are hidden