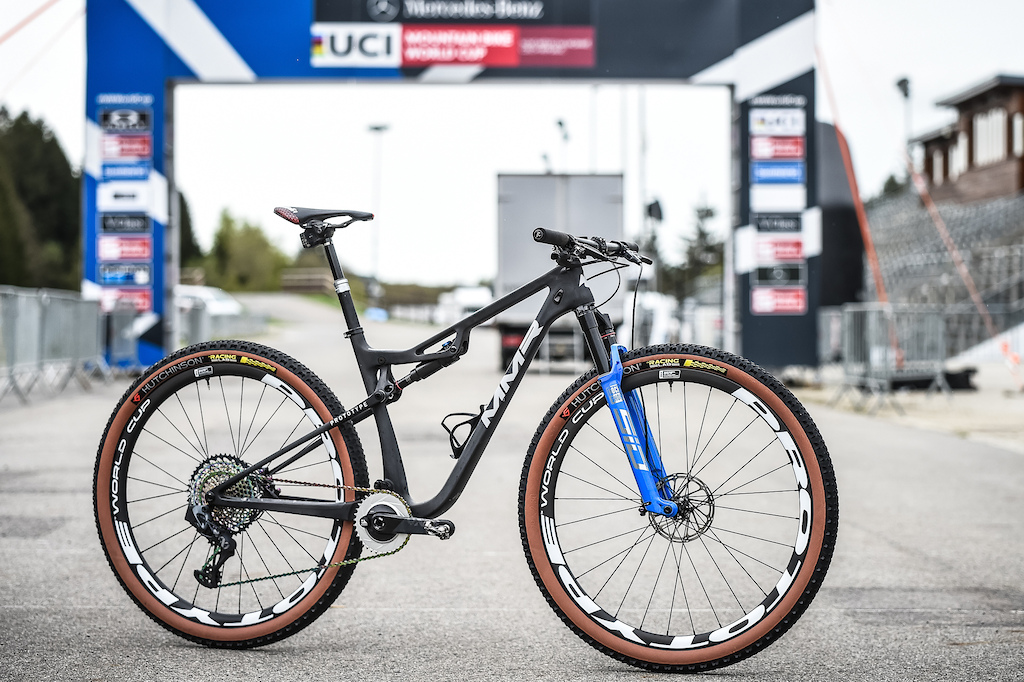 With the Olympics looming, we're expecting to see a lot of prototype kit surfacing at the XC World Cups this year. So far we've seen Tokyo-ready full suspension bikes from Santa Cruz and Ghost and now the latest bit of tech we've been sent photos of is the new full suspension Kenta bike from the Spanish brand MMR.

Much like the previous version of the Kenta that was developed in the 2017 World Cup season, this is a full-suspension XC race bike with a linkage-driven single pivot and a super low profile. We called that previous bike "one of the nicest looking steeds" of the XC field at the time and, from first impressions, this new bike will probably live up to that legacy. 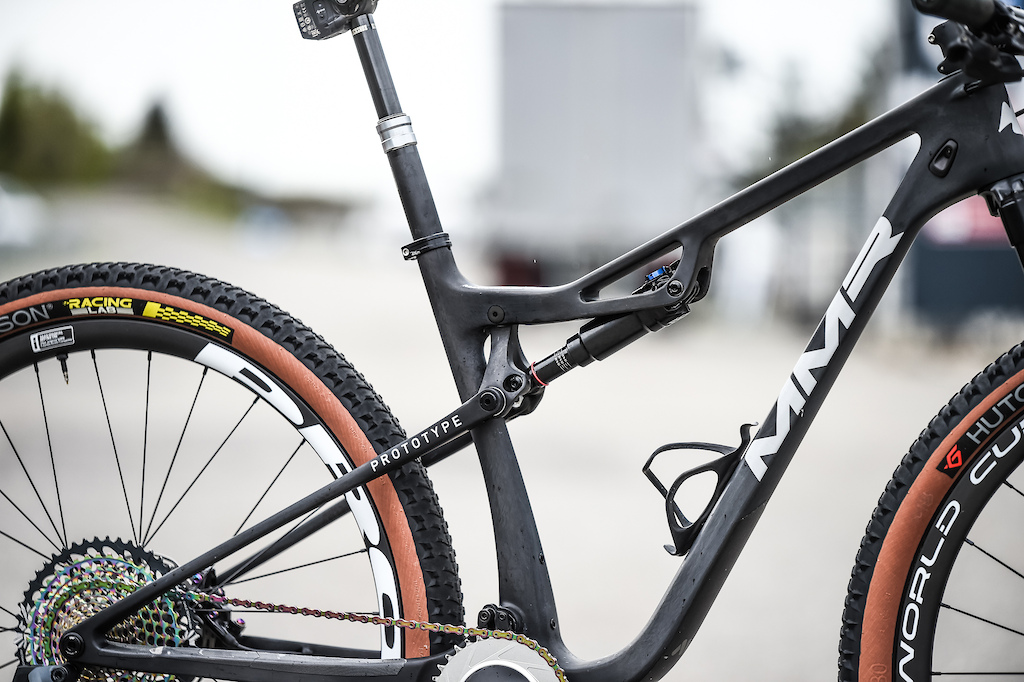 MMR has spent the most time working on the linkage area and has developed a new link and re-shaped mounting. The new link is more triangular in shape and has separate mounting points for the shock and the seat stays, which MMR says has optimised the kinematics. There's also apparently more space in the top tube mount that will allow you to run the bike with either 100 or 120mm of travel by swapping out the shock. 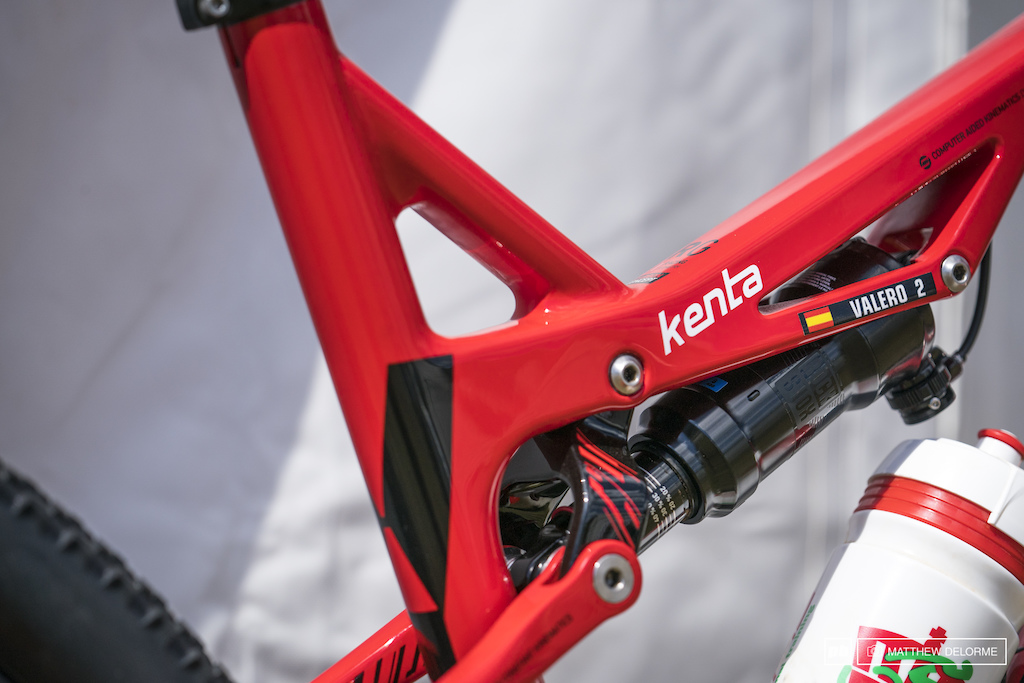 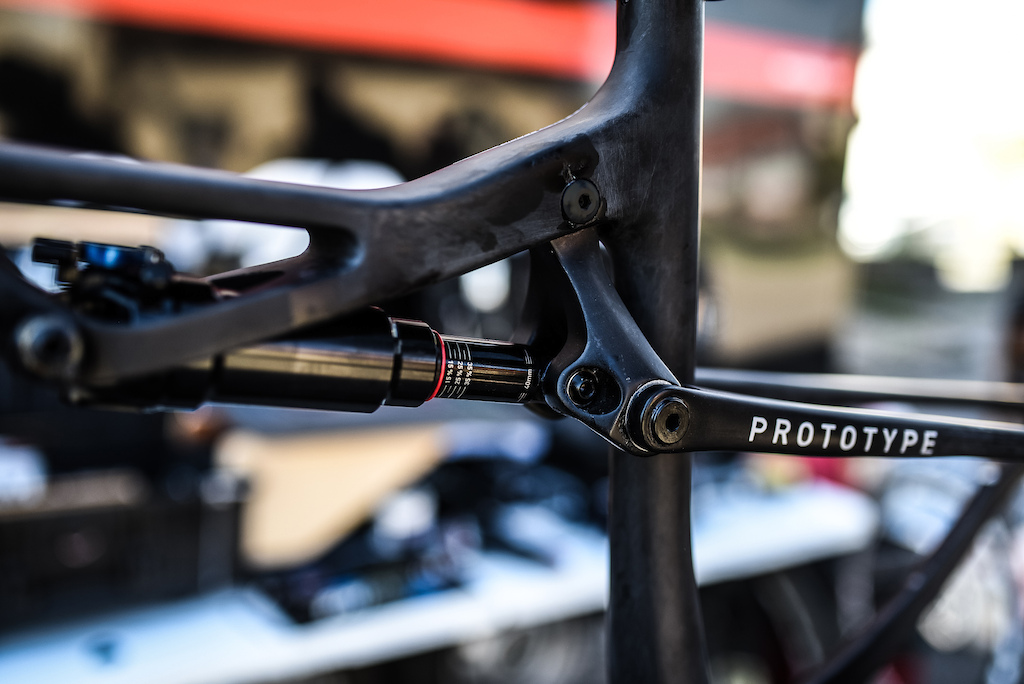 The old (left) vs the new (right) link on the MMR Kenta. 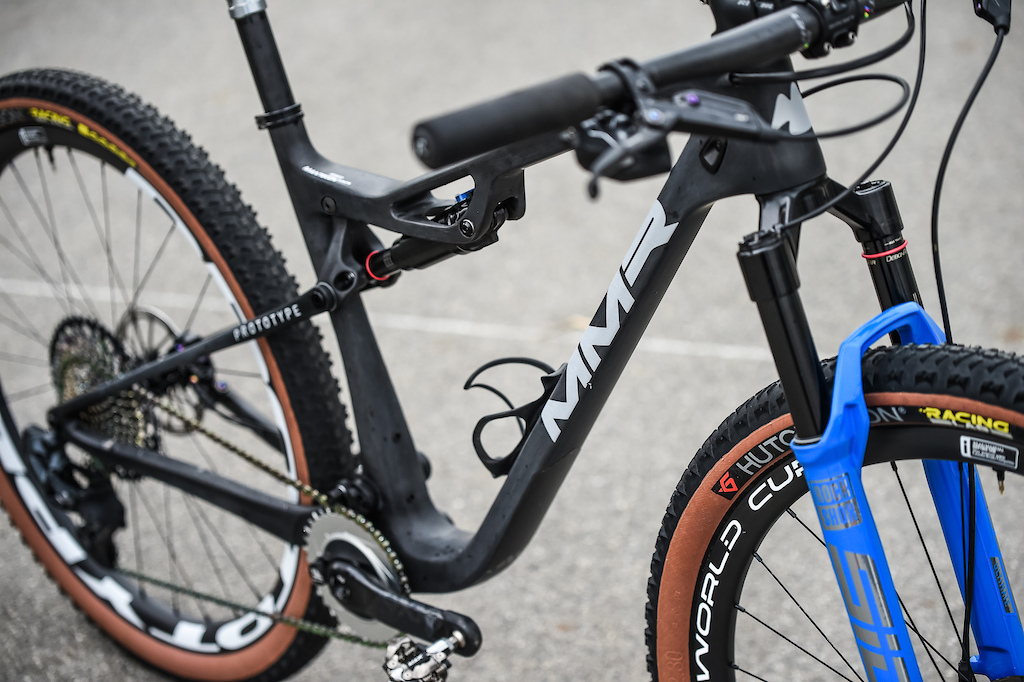 The top tube mount is more spacious and now allows riders to swap out the shock and switch the bike between 100mm and 120mm rear travel.
MMR tells us they have also reworked the geometry and, although they wouldn't give us any exact figures, the bike is now slacker and is shaking off its old-school racing geometry or, in other words, it's probably longer and lower. We also noticed the shorter seat tower, which should improve standover height and help to get the saddle out of the way on descents now that dropper seat posts are more common in cross-country racing. Finally, it looks like the cable routing has been reworked - with the shock now oriented the other way round, the remote lockout can be routed straight into the top tube through the shock cradle for a cleaner look. 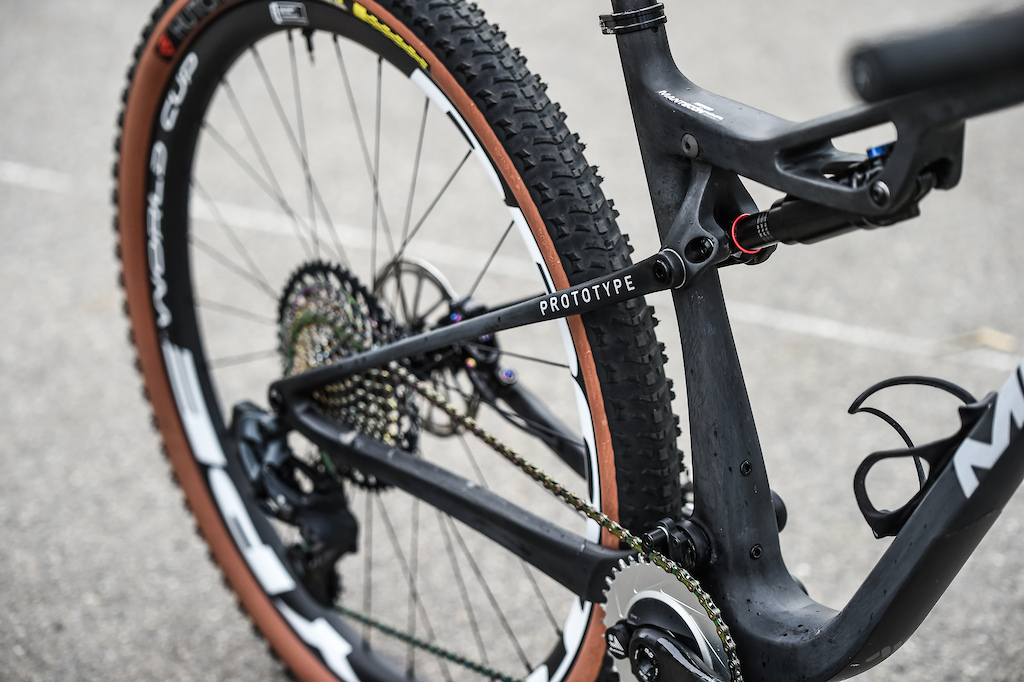 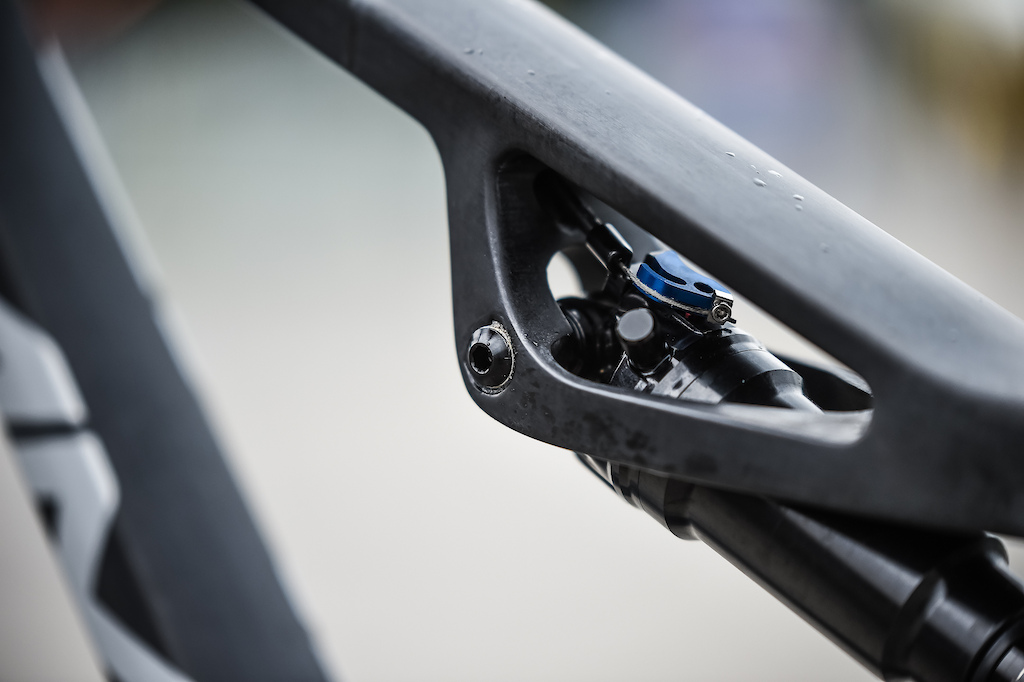 The remote lockout cable now heads straight from the shock into the top tube. 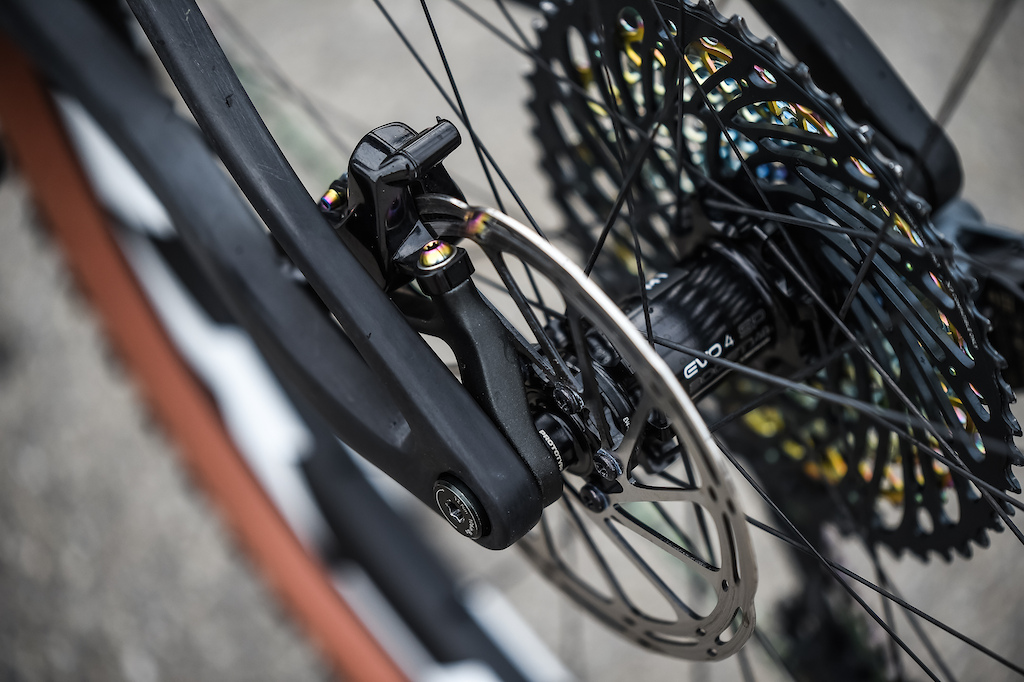 The brake mounts have been decoupled from the swingarm to isolate braking forces and reduce weight. 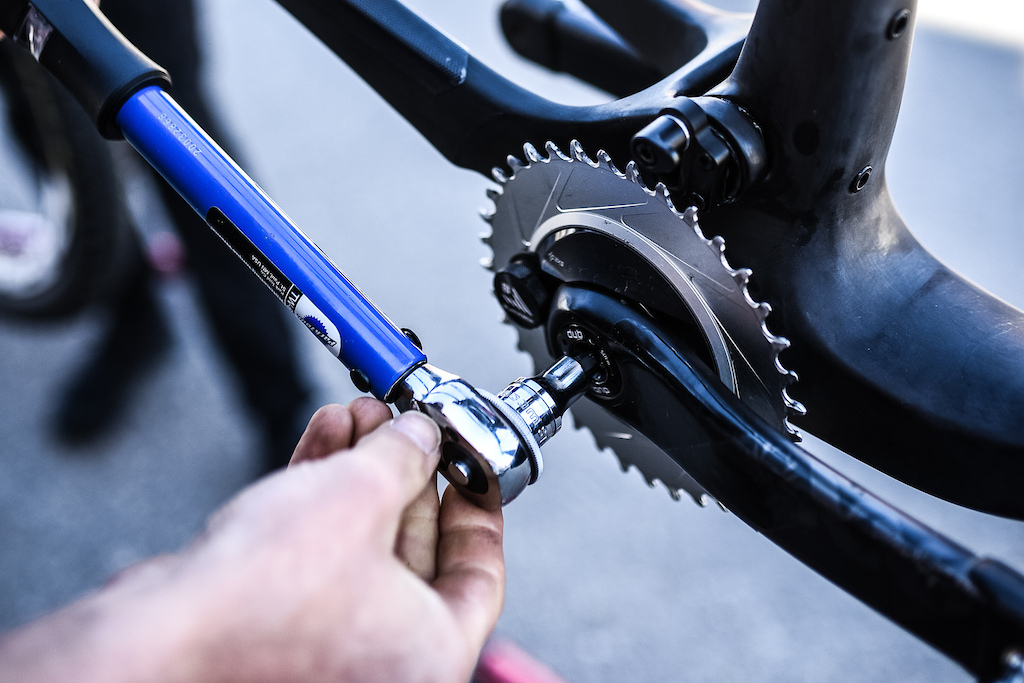 The mounting for a front derailleur has gone and a minimalist chain guide is now integrated into the frame.

ratedgg13 (May 17, 2021 at 12:06)
Because single pivot is the simplest, lightest design. When grams matter, you go with something without any additional linkage/parts.

toast2266 (May 17, 2021 at 12:12)
There's plenty that have a vertical shock - Scott, BMC, Mondraker, Kross, Pivot, etc. It's just how the company wants to package their suspension design to keep things light and leave room for bottle cages.

nattyd (May 17, 2021 at 12:24)
Most of the recent XC bikes have a flex-stay single pivot design, because it's just hard to beat for weight. However, as toast2266 points out, there's split between top tube and bottom bracket shock mounts. Top tube is better for fitting water bottles, bottom bracket has the advantage of being already a strong/stiff part of the frame, so it makes a lot of structural sense.

If I were racing world cups, I'd probably prefer the Spark/BB design for its inherent robustness, but as an amateur who doesn't have a pit crew, I love having space for two bottles. It lets me leave my hydration pack at home on 99% of rides.

AgrAde (May 17, 2021 at 12:34)
When the rear swingarm is pushing directly on a shock, and not using a big triangular rocker to redirect the forces in a different direction (like a trek rocker or a Cruz lower link), the forces on the front triangle where the link mounts to it are quite low. It also means the forces at the shock mount are easy to deal with because it pushes directly into the top tube, acting to compress the tube rather than try bend it like it would if it was at a bigger angle to the tube (like ones that mount mid-downtube like older banshees). Having pivots near tube junctions further lowers the forces on the tubes, so the bb area pivot and the link pivot are very efficiently placed and help save weight. Having them far apart helps too. Look at the big brace the Capra needs across it's front triangle to deal with the forces from it's mid-seat-tube pivot placement and lower slung linkage.

So the design is just much easier to make lightweight. And that's ignoring how it's the best layout for bottles.

BespokeTrailMix (May 17, 2021 at 12:37)
The winning bike of yesterday's elite men's world cup XCO race takes offense to this question.

nattyd (May 17, 2021 at 15:52)
@AgrAde: I don't know about this analysis. The shock mount on my Epic is basically two small tabs bonded onto the bottom of the top tube and loaded entirely in shear. Carbon is a strong material, so apparently they can get away with this, but load through the shock is not just compressing the tube: it's trying to tear the mount off the tube.

billreilly (May 17, 2021 at 16:25)
They don't... Some are horizontal below the top tube and some are vertical above the bottom bracket next to the seat tube.

AgrAde (May 17, 2021 at 17:51)
@nattyd: Yes of course, it's not perfectly putting the tube into compression. Yes it's mounted below the tube so there are shear forces in the mount, imparting a small bending moment on the tube. My point is that the bending forces are overall quite low in the tubes.

Mattin (May 18, 2021 at 7:58)
I would not be surprised if marketing/sales are influencing this too: If two options have similar performance, people could get the (false) perception that the version with the more minimalistic design is lighter/ faster.

This design looks almost like a hardtail, creating a fast perception, while a four bar design could create a more enduro/DH perception that is slower to pedal on.

This can only be confirmed/busted by doing extended market research, but it could have a small/medium/big effect on the sales of a bike.

And let's be honest, pro riders need to be fast, but the reason for them being sponsored is not a charity, but a business model to sell more bikes of the brand they ride for.

So selling bikes that look fast might actually be important for sales.

marseer (May 17, 2021 at 13:00)
So what IS the rear brake mount attached to? It can't just float around the axle or all the braking power would be held by the cable or something, right?

AgrAde (May 17, 2021 at 13:23)
It'll be pushing on the chainstay, I think the weird mount is so the carbon tubing for the seatstay is simpler and the flexible part of the seatstay can be longer, and more isolated from the force the caliper puts on the frame. I don't think it has much if anything to do with changing the kinematics of the suspension.

Ridge-Rider (May 17, 2021 at 13:26)
I think it is attached to the chain stay of the one piece swing arm, but not the seat stay which needs to flex. This way the brake forces go into the left side of the chain stay only and not into the flexing seat stay. You can just see it in one picture.

shredddr (May 17, 2021 at 14:17)
I'm curious how and where these flex stay bikes are designed to flex, but i guess you could think of it as a split-pivot/whatever-the-hell-Trek-calls-their-thing, so attaching the brake mount to the chainstays is a nifty bit of design... quite cool.

Looks like a good application for a flat-mount caliper.

onawalk (May 17, 2021 at 14:32)
This is going to sound pedantic,
But its noted under the pic of the “floating” brake that its decoupled from the swingarm.
My question is, given that this is a single pivot as the seat stay acts as a “pivot” isnt the brake still coupled to the swingarm (chainstay)? It looks to be de-coupled from the seatstay, and I’m really interested if this does in fact separate the braking from suspension action.

Am I looking at it incorrectly?

BrandynPatterson (May 17, 2021 at 15:31)
It is mounted to the chainstay and axle, the BikeRumour link below has a picture that shows it and states it. I was confused as well thinking it was a "heavy" floating DH system.
bikerumor.com/2021/05/17/reshaped-mmr-kenta-prototype-xc-mountain-bike-gets-nove-mesto-world-cup-race-debut

onawalk (May 18, 2021 at 16:32)
@BrandynPatterson: Appreciate the link, I’ll dive a little deeper into what bikerumour has to say.
By the looks of it, it is a “floating” brake of sorts, as its been de-coupled from the seatstay, that acts as the pivot, similar to a faux-bar suspension.
My question is, given that it is still attached to the chainstay, wouldn’t it still affect the suspension action of the bike?
The typical DH “floating” brake pivoted around the axle, similar to this, but was then taken back to the seat tube, isolating the brake from acting on the suspension.

How would this differ from the brake caliber being mounted directly to the chainstay, like road bikes are?

Mostly just trying to wrap my head around the big brained theories of engineers, and understand how this works, or doesn’t work?

onawalk (May 18, 2021 at 17:14)
@BrandynPatterson:
Copied from a Vital article on ‘brake jack” or “anti-rise” in an explanation on the how Eminents floating brake works.

What is anti-rise? To answer that we must first think of what happens during braking to slow or stop any bicycle. The rider’s body weight moves forward on the bike and unweights the rear end. There is a natural tendency for the rear end to expand due to the rear wheel unweighting, but this does not always happen with bicycle suspension. Mountain bike suspension designs which place the axle and brake mount directly on the chainstay (single pivot/faux bar) are heavily influenced by the force of the brake slowing the rotation of the wheel. This drives the suspension forward to compress or “brake jack”. This can be improved by moving the brake and axle mounting location to a separate portion of the linkage, not directly pivoting on the frame. Common examples of this are split pivot and Horst link designs where in both examples the brake mount is not on the chainstay, but the seatstay. By mounting the brake on the seatstay, the brake follows the seat stay motion and lowers (but does not completely eliminate) the transfer of compressive forces to the suspension.

bonkmasterflex (May 17, 2021 at 14:57)
Where are these bikes actually sold? Maybe it is because I am an uncultured American swine, but I never see half of the bike brands at XC races out on the trails...

Would you find MMRs normally out at a trail network in Europe?

chris2200 (May 17, 2021 at 17:15)
Tried to go to their website. A sonic wall warning came up, and said they were blocking computers from Canada. Anyone else have this? Im on my personal computer viewing from my personal network. weird

abbottt1 (May 17, 2021 at 13:47)
Everything about that screams Oiz, right down to the ability to swap out shocks to change the rear travel..

all-knowen (May 18, 2021 at 14:17)
Can someone please tell me what that chain ring is called
Below threshold threads are hidden