Is this Mondraker Prototype the Wildest XC Bike of the Year? - Interbike 2018 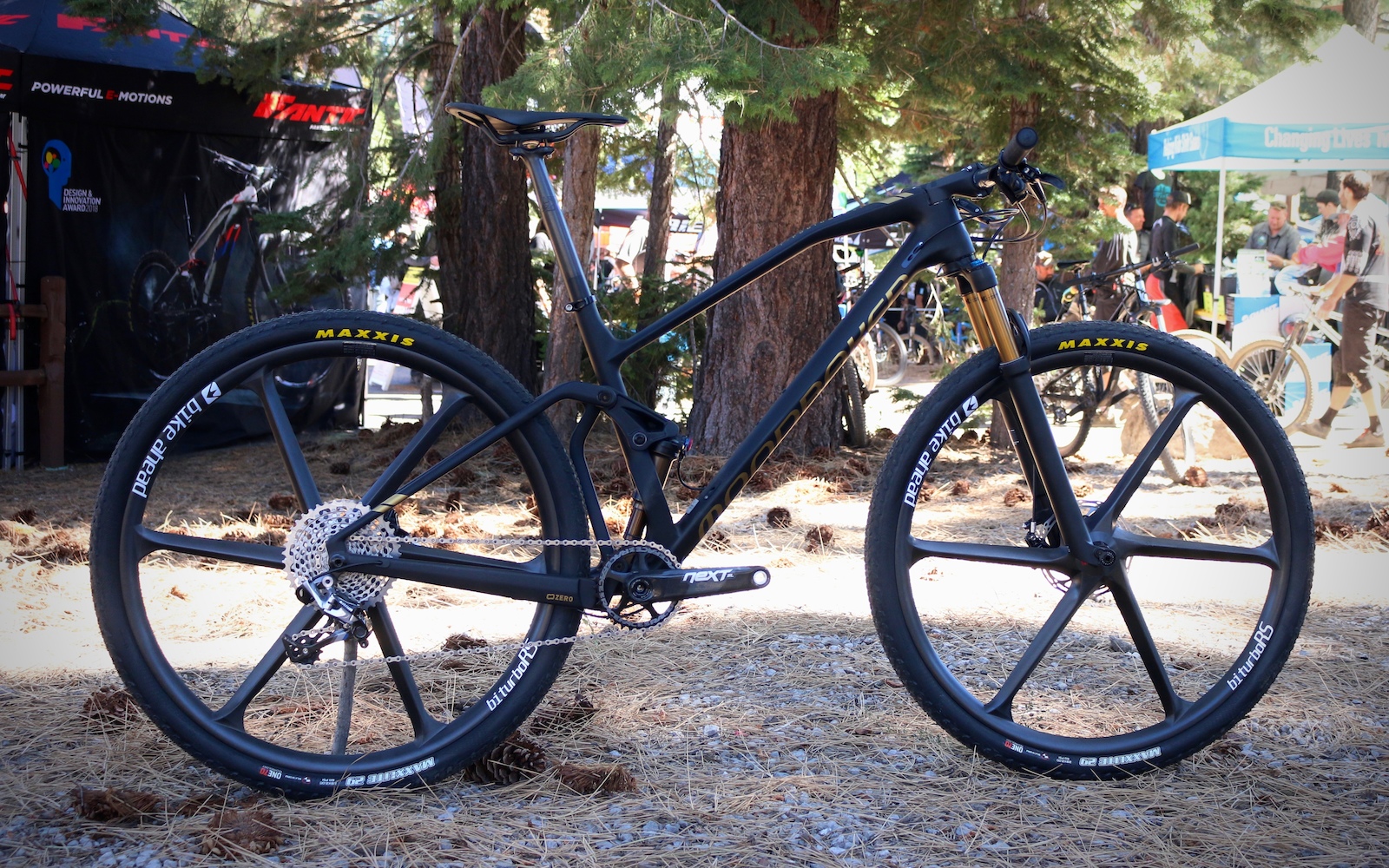 Mondraker's Podium Carbon Pro hardtail is one of the most unique looking mountain bikes that don't employ a rear shock, and there have been rumors of the Spanish brand cooking up a rather special full-suspension brother for it with help from the carbon specialists at 3C. The result is the feathery, 100mm-travel F-Podium RR SL cross-country race bike that you see here. Weight? 18.8lb.

The smart people at 3C have their hands in developing and manufacturing carbon for the high-end automotive, medical, and aerospace industries, all done in Germany and Switzerland. It's apparently the kinda outfit where security levels are higher than the average mountain biker from BC, and armed guards keep out the riff-raff who don't have security clearance.

Mondraker's goal was to take carbon to another level, and they're hoping that the technology at 3C, which Mondraker says is a decade ahead of what's being used in the bike world right now, will let them do that.
Mondraker F-Podium RR SL 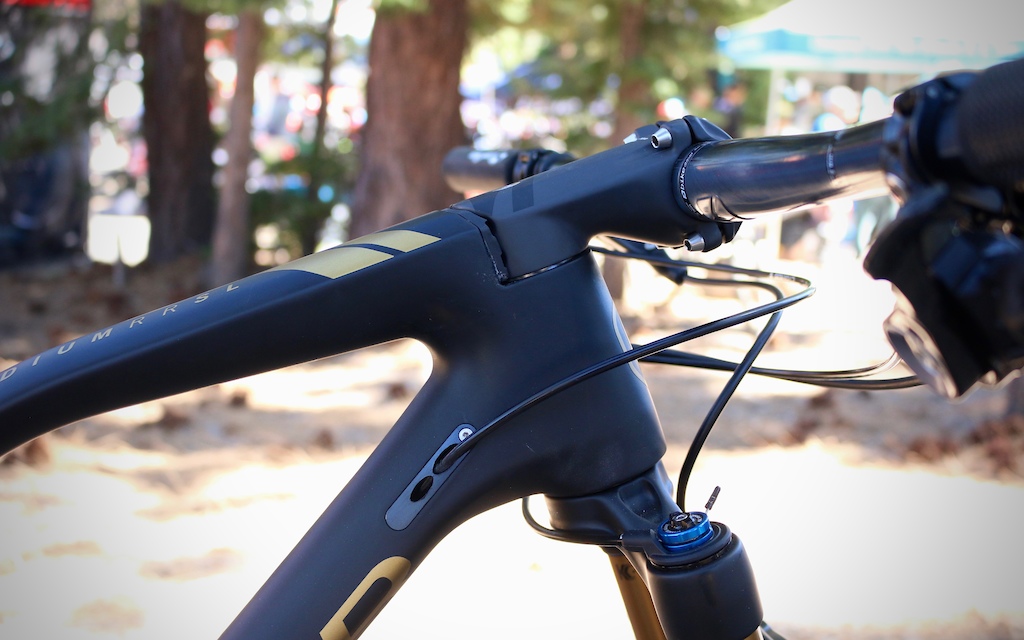 Let's not kid ourselves here: There's nothing wrong with a traditional stem setup. But Mondraker's design, which is similar to what Look does, sure is stunning.

All that sounds pretty dang cool, right? Sure, but here's the catch: This thing might happen... Or it might not. 3C has its hands in some serious stuff, and as neat looking as Mondraker's German-made F-Podium RR SL frame is, it's probably also small beans for them. And then there's the price, which Mondraker obviously hasn't locked down as it's still in the prototype phase, but I'm pretty sure that no one is going to think that it's a good deal.

It's going to be a high-end race bike, so expect a high-end price if and when it ever hits the market. 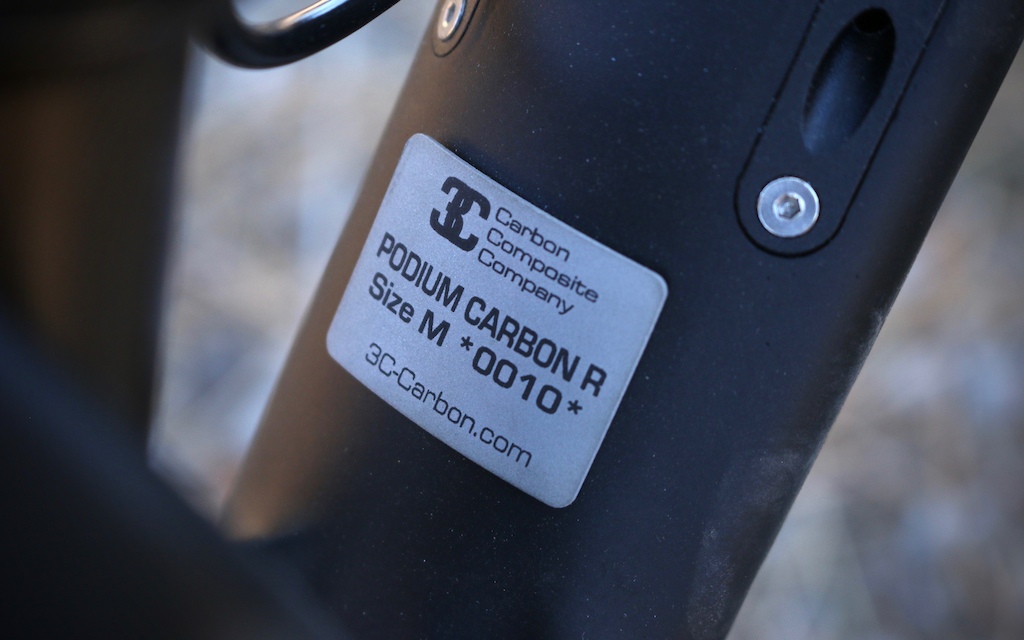 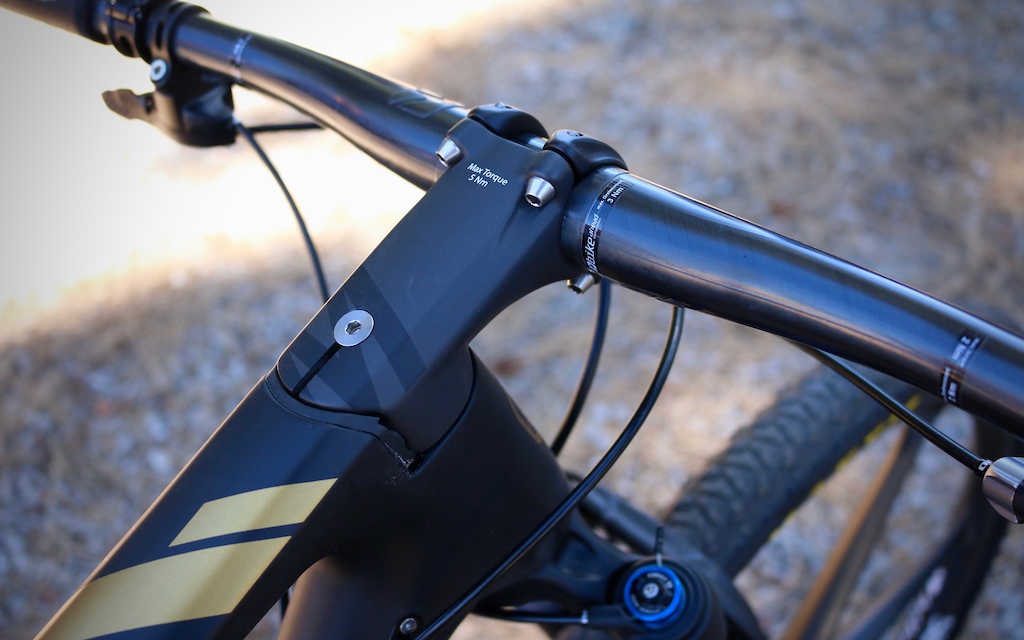 That small plaque on the downtube is the clue that there's something else going on here.

Mondraker wasn't all that ready to share many details about how the frame is manufactured - it just arrived a few days ago - or even how much a bare frame weighs, but I do know that the bike pictured here comes in at just 18.8lb. So, not much.

Granted, they didn't exactly hold back with the spec - check out those wheels, tires, and cranks - but it's not easy to get a full-suspension bike that light unless you're starting with a very light frame. 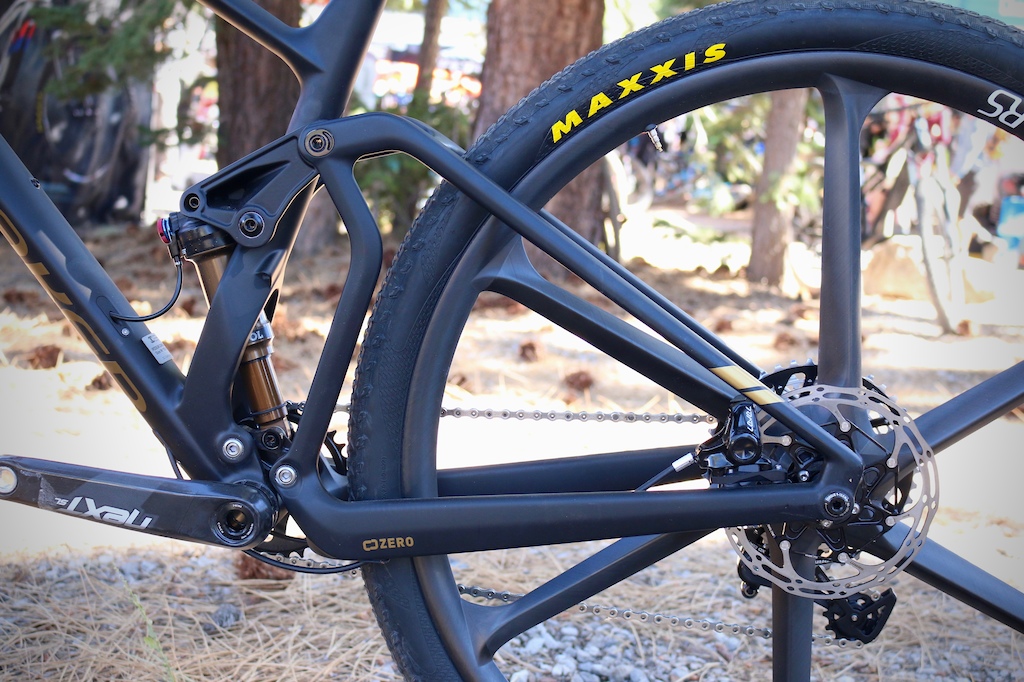 A revised version of the Zero Suspension System controls 100mm of travel.

The 100mm of cross-country-focused travel is controlled by Mondraker's Zero Suspension System, a layout that has always impressed me with its efficiency - not once did I feel the need to firm up my 150mm-travel Foxy test bike. So with just 100mm, it's probably safe to assume that the F-Podium RR SL is a rocket ship. Zero Suspension consists of two short links that rotate in the same direction, unlike a VPP system that uses counter-rotating links.

Another difference between the Spanish brand's design and VPP is how the shock is mounted to both the upper and lower links as opposed to just the upper link and to the front triangle. 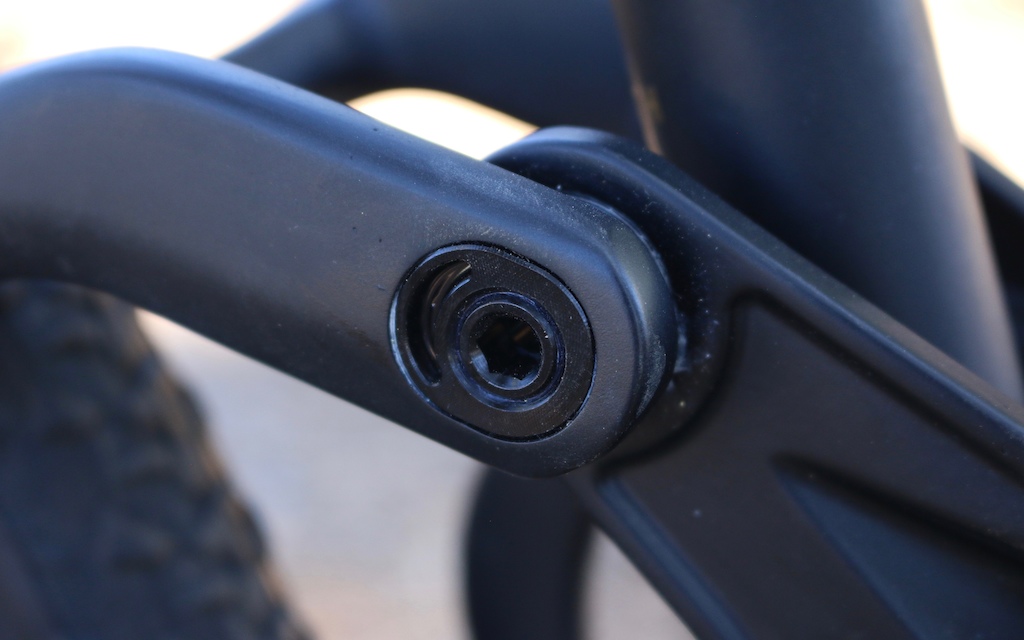 See that tiny scoop of material missing from the pivot hardware? Yeah, they're serious about making this thing light.

Cross-country might not be your thing, and you might not give a single shit about how light it is, but who cares - the German-made F-Podium RR SL looks unreal. What do you think?

Euskafreez (Sep 17, 2018 at 2:11)
@headshot: Well it's not that hard to convert though (divide the weight in pounds by 2, then remove 10% to the result and you have have done the conversion). Yet, they'd use both units

guylovesbike (Sep 19, 2018 at 6:25)
@kipvr: Pinkbike is canadian, so they use the Simplified Canadian Units System

Unfortunately, that's how we do it

slickwilly1 (Sep 16, 2018 at 18:24)
XC might not be your thing but when this tech trickles up to the trail/all mountain/enduro/down country or whatever you want to call it that will be cool.

opignonlibre (Sep 17, 2018 at 1:39)
I've been riding schwalbe thunderburts and maxxis Torch (basically semi slick bmx tires in 29" size) for years on a hardtail. Those tires usually slide very early and so makes them quite predictable despite their lack of grip so you don't wipe out as quickly as you would think. When all your local races are on dry soil, present a lot of climbing on fireroads and not too technical descents these tires still make some sense.

Mind you, a lot of marathon and regional xc races could be called gravel races really.

Serpentras (Sep 17, 2018 at 3:56)
@opignonlibre: don't care, I still use MAXXIS SS on my 29"xc for the reason of cornering and much more grip when the trails look more suited for a 140mm travel bike. Also when we talk about race's most xc amatures can't descent and will make shortly a very dusty trail. More grip will help there..

WAKIdesigns (Sep 17, 2018 at 4:02) (Below Threshold)
@Serpentras: huh, I agree with you, but there are folks who can't tell a difference in grip between Crossmark and Hans Dampf. Or Nobby Nic and Minion. Some people... they just should gravel bikes on MTB comps...

They don't see the reason to switch to a dhf , dhr or something equally well suited because it feels the same.

WAKIdesigns (Sep 17, 2018 at 4:51) (Below Threshold)
@Serpentras: I mean, these two examples were a real thing. I was asked for an advice and gave Hd to owner of crossmarks and DHF to a dude who wanted more grip in the bikeparks over his HD... both said, I can't feel any difference. Well... that's life. I personally can't tell a difference in driving between Volvo V70 and Audi A6 or BMW 5.

WAKIdesigns (Sep 16, 2018 at 23:24)
@Kiwiplague: except they aren’t. One could argue that they are the most technologically advanced MTB wheelset ever made. But I am not going to even try to convince you

fourcross (Sep 16, 2018 at 23:40)
@chillrider199: crazy thing here is, how light and strong they actually are. Looks don't always do justice to the real life performance.

WAKIdesigns (Sep 17, 2018 at 0:34)
@fourcross: This is the only carbon wheelset I could run. I couldn't give a slightest damn about Enve even if they gave them to me for free. I'd strip the rims off, keep CK hubs and mount alu rims. But these... these are sexy as hell to me, even though they must be making for a damn harsh ride. Amazing how different we humans are in the face of something much different than the rest. Love or hate, nothing in between, and the only fool is the one who can't cope with another persons opinion... wait...

opignonlibre (Sep 17, 2018 at 1:32)
@WAKIdesigns: I'd have to ride them first to have an opinion. Sometimes wheels too stiff can be as much an issue as noodly ones.

Kiwiplague (Sep 17, 2018 at 3:12)
@WAKIdesigns: I don't need convincing to know they probably ride amazingly well, they just don't do it for me in the looks department (that makes me sound really shallow, I know)

pensamtb (Sep 17, 2018 at 4:44)
"Cross-country might not be your thing, and you might not give a single shit about how light it is, but who cares - the German-made F-Podium RR SL looks unreal. What do you think? "

Why would I give a sh*t if it weighs less than a fart?

eimechanics (Sep 16, 2018 at 21:26)
I actually like it especially the weight thing. Only thing I don't like is the flush headtube and stem. I have a Look 675 road bike using the similar concept... The Con is that limited stem option can be used; and falling/crashing the stem will hit the frame (they just use a spacer to avoid contact in Look 675) especially MTB has more chances of impact.

sissypants (Sep 17, 2018 at 6:26)
It's hardly fair to claim a weight of 18.8 lbs when the first thing any owner will do is switch out the Maxxlite airbag tires for something sturdier (and heavier).

Ignatiusfromspain (Sep 19, 2018 at 2:44)
Spanish brands Mondraker and Unno clearly have decided to make maybe the most stunning bikes, and for sure the most expensive.
Funny to think we used to think “made in Spain=cheap and bad”...

socalmtbr (Sep 26, 2018 at 10:57)
That bike is SICK!!! I cannot wait to get a 21lb or under XC MTB for less than $10K. The prices and weight will continue to drop as this tech trickles down. Love the innovation!
Also, that stem is interesting because it positions the rider lower rather than having a -50 degree stem.
I don't understand why manufacturers haven't modified the head tube height/design to compensate for the much larger wheels. At least give us some options rather than forcing us so upright especially on smaller frames like mine.

darkmuncan (Sep 16, 2018 at 18:19)
Doesn't look like anything that isn't already happening with the big names in the aero road bike world.

I'm pretty sure 6 spoke wheels, full suspension, and two inch wide tires aren't commonplace on aero bikes. The only similarity between this thing and an aero bike is the weight...

codypup (Sep 17, 2018 at 7:42)
Pandering to the traditional XC crowd with that zero suspension

onemanarmy Plus (Sep 17, 2018 at 17:12)
Why remove the fork/shock graphics? Doesn't make the bike look any cooler and can only negatively effect brand relations...

hamncheez (Sep 16, 2018 at 20:43)
its ugly. From an engineering perspective, its stupid. Straight "tubes" are almost always stronger than the weird, pointless angles that Mondraker puts in their bikes, and where the top tube intersects the head tube is retarded as well.

wittereus (Sep 17, 2018 at 5:16)
@paja-tousek: make a Scratch in a cristal and it wil fail faster then me hitting the ground after an OTB

warmerdamj (Sep 17, 2018 at 9:26)
You should get in touch with Mondraker and give their engineers all your "tube" knowledge. I bet they don't know.

fattyheadshok (Sep 16, 2018 at 18:33)
That bike looks like it’ll crumble on the first drop. Stem looks extremely limiting. As in no choice for length, rise, etc. This thing looks like it’s for “ aggressive gravel riding” I’ll pass.

mikelevy Mod Plus (Sep 16, 2018 at 18:40)
The stem could certainly be limiting - I agree there - but keep in mind that this thing is made for pro-level cross-country racing, not all-mountain use. For its intentions, is suspect most riders will be okay with the dimensions, but I'd hope that Mondraker would have other length stems as well.