Monster Energy, the white-hot U.S. energy drink that recently took over 1st place from Red Bull as the largest by volume seller in the States, has expanded its reach to include the UK and will – in spectacular fashion – become very apparent on the action sports and motorsports circuits throughout the summer. 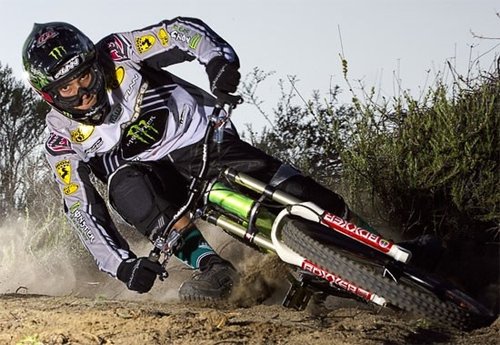 Monster Energy will be widely available across the UK at select bars and retail outlets over the coming months. You can also take Monster Energy for a test drive at most of this year’s music festivals, including Download, Gatecrasher and Loch Lomond.

Everybody in the UK’s diggin’ ‘em – so will you. On the ‘Net at www.monsterenergy.com

For more information on the NPS please checkout www.NPSDH.com
Please note, Parking and spectating is always free and all of our venues have great XC loops to have a blast around!

morewhitenoise (May 15, 2008 at 14:44)
its not the same stuff as the ones i shipped from the us unfortunately...alot less sugar and caffeine! ( i think the Food Standards Agency has something to do with it!)

kolya (May 14, 2008 at 20:33)
monster is like a mafia or really brilliant people they own the best two wheeled riders in the planet, Ryan villopoto, james stewart, sam hill, pourcel, all premium quality on theur respective category. respect

lionel17 (May 15, 2008 at 0:05)
Nice, we had 3 Monster Energy trucks come by to our local jumps at Birmingham Wheels to take some photo's and drop off some goodies for our Jam on sunday.

dhdavid2000 (May 15, 2008 at 14:47)
i hate how theres a girl in a thong and shes got a beutidull ass but a bunch fo people are talking about Sam Hills. Well sure hes awsome but that ass is amazing.