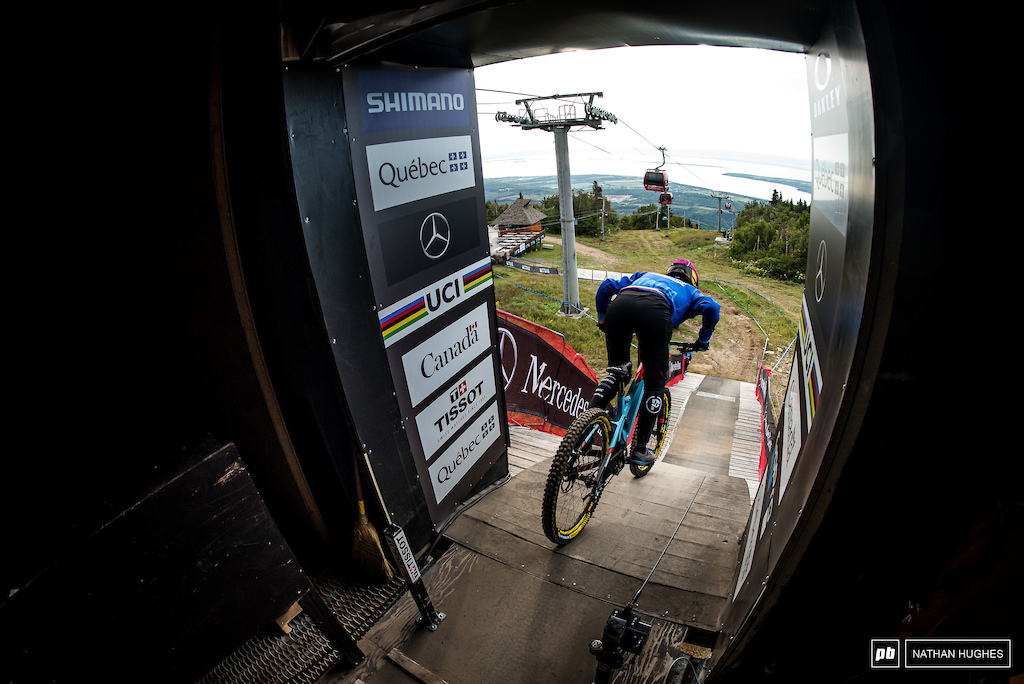 Following Quebec's announcement yesterday that all public gatherings would be banned until August 31, the organisers behind the Mont Sainte Anne World Cups have today announced its cancellation.

The Canadian venue was scheduled to kick off both the XC and downhill seasons but it has now become the latest victim in the race calendar of the pandemic. The updated seasons for both disciplines are below.

In light of the ongoing COVID-19 pandemic and Government of Quebec rules prohibiting events from being held until August 31, Cycling Canada, Quebec Summer Events Corporation and event producer Gestev have been forced to cancel the UCI Mountain Bike World Cup that was scheduled to take place at Mont-Sainte-Anne August 21–23, 2020.

“Our priority above all else is the health and safety of the athletes, volunteers, employees and thousands of spectators who travel to be a part of Vélirium every year,” said Gabriel Fontaine Leclerc, General manager at Gestev. “Too many questions remain unanswered for us to pursue the possibility of postponing the event until the fall, and considering the sheer complexity of such an undertaking and the major challenges involved for our partners it is not feasible for us to explore this option. Let’s consider this a rain check for 2021.”

For Cycling Canada, this decision is the latest in a series of postponements and cancellations of international competitions across the country in the coming months. “Here at Cycling Canada we are obviously disappointed to miss a huge annual event like the UCI Mountain Bike World Cup at Mont-Sainte-Anne, but the health and safety of our athletes and members will always be our priority. We all have a duty to support the efforts of the public health authorities to mitigate the transmission of this virus,” said Mathieu Boucher, Head of Development and Operations at Cycling Canada.

The organizers would like to thank everyone, everywhere who has been involved in preparing for this year’s Vélirium, which would have been the 30th UCI-sanctioned event to be held at Mont-Sainte-Anne since 1991.

scotttherider (May 5, 2020 at 9:53)
I’ve been saying this since they cancelled the second round. I’m just waiting for rampage to get nixed.

Floho (May 5, 2020 at 11:03)
I too find it ridiculous to keep dragging it on for so long, but I could actually see some venues moving forward with their events. In Austria, the outbreak was contained well, which of course is great, but many people have not realized how hard it could have been, even officials and politicians. Thus I think that, while incredibly stupid, we could see big sporting events being held in Austria. But of course, we'll have to see how the situation develops.

the-dadcam-diaries (May 5, 2020 at 11:40)
I think it may have something to do with insurance. If they cancel of there own accord insurance companies may not payout, but if they are forced to by circumstance then the policy is valid.

pigman65 (May 5, 2020 at 15:22) (Below Threshold)
Nothing is going to happen for a long time. I said this in March. Even next year . Public gatherings like this really are not important

chyu (May 5, 2020 at 22:00)
They would have no choice but to conclude a final showdown. All MTB racers will be doing a death race at RedBull Rampage. Two categories: Men and Women. Race format: Enduro on the Up; DH/FR on the down. Winner takes all.

DoubleCrownAddict (May 6, 2020 at 0:01)
Tough situation for UCI, just like everything else. Go out of business from lack of revenue or put lives at risk. Organizations like these aren't likely to get government bail outs so this could really kill international racing. The way the mountain bike community is facing this is similar to the same way government's are failing to prepare their citizens for the coming depression and encouraging them to become more self reliant. The delusion of this business as usual approach is minimizing the panic right now but completely failing to prepare everybody for what is to come.

scotttherider (May 6, 2020 at 4:07)
@DoubleCrownAddict: instead of bailing out all of the corporations just hit the reset button and pay all the bailouts to pay off everyone’s debts....then everyone will keep spending.

bman33 (May 5, 2020 at 19:07)
@nozes: Bullshit statement. People die everyday. Yes those who lost 'loved ones' in this and ALL diseases, accidents, etc. have rough times. That said, it does not discount anyone else's troubles or disappointments. So should the world not be happy or disappointed because others aren't? No....

Yes, this season is a large disappointment for both racers and fans. That in NO way discounts anyone's losses.

nozes (May 5, 2020 at 23:15)
@bman33: Don't tell me about disapointment,I've waited 30 years for the first DH WC in my country just to have it postponed (with chances of bring cancelled).
Don't have to look hard into it, it's sh#t for everybody.

bigdutch84 (May 5, 2020 at 9:44)
This one really stings, i didnt think it would happen but was just hoping that maybe by some miracle it could have worked out. I was there for world champs last year and would have been awesome to go again after this shit year.

JustinMD (May 6, 2020 at 9:40)
I'm absolutely sure that the world will implode from these idiots running out gov't. Mass riots, mental illness and hunger will be coming soon. Hang on to your butts folks.

brajal (May 5, 2020 at 8:21)
surprising? at this time is more expected than a Session looking bike...
Below threshold threads are hidden

hamncheez (May 5, 2020 at 8:26)
So a month ago we didn't know much about the virus, but now that we do, and that its far less deadly that previously thought, AND that the it started spreading months sooner than we thought, its time to open up things again. The latest antibody tests show that exposure is far more widespread, up to 40 times as high, as previously thought. Most likely in Europe and North America most people have already been exposed. Unless you're older than 65, have a compromised immune system, or smoke heavily, its ok to start getting out again.

km79 (May 5, 2020 at 8:36)
Who's we? Been involved much in the scientific studies yourself have you? Think I'll take my advice from the experts thanks.

"That estimate is 28 to 55 times higher than the 7,994 confirmed cases of COVID-19 reported to the county at the time of the study in early April"

"Out of the 2,450 total tests, more than 1,300 staff and inmates tested positive... analysis of the test results confirmed that 98% of those who tested positive are asymptomatic..."

kleinblake (May 5, 2020 at 8:54)
@hamncheez: sacrifice our grandparents so we can watch bike races. Either way, the virus will overwhelm our healthcare systems

chriskneeland (May 5, 2020 at 9:13)
@hamncheez: Your logic would be sound if it wasn't for the unreliability of current antibody tests. False positives are skewing the numbers.

hamncheez (May 5, 2020 at 9:28)
@kleinblake: How is a bike race connected to the viruses geriatric fatality rate?

This whole quarantine stuff was about flattening the curve, not about preventing deaths, other than deaths from overwhelmed healthcare providers. Our healthcare infrastructure is not overwhelmed. Its the opposite. Our hospitals are all empty. Nurses and techs are being furloughed. My wife had a baby a month ago, and the hospital was a ghost town.

What does kill people with 100% surety is poverty from a global economic depression. The UN is now worried that tens of millions of people in India and Africa are facing food shortages and legit starvation from the economic turndown.

hamncheez (May 5, 2020 at 9:31)
@chriskneeland: Yes, testing isn't perfect. That number could be lower. However, the mortality rate is also most likely over estimated because we've created financial incentives for hospitals to report COVID19 as the cause of death. Also, people with other terminal preexisting conditions are labeled as COVID19 deaths if they test positive. Some municipalities like NYC are reporting thousands of deaths as COVID19 from observed symptoms, not from actual tests.

Our data isn't perfect but we have to made decisions on the best data we have, not on fear or speculation.

commental (May 5, 2020 at 9:53)
@hamncheez: Obviously you have a better idea of what's happening in the US, but those financial incentives don't exist in European healthcare. If anything deaths are being under reported here. I agree that many hospitals are very quiet, however it's a fluid situation that can change quickly.

5-9-A2 (May 5, 2020 at 10:03)
@hamncheez: So Africa's food shortage is going to be due to an depression and nothing to due with the devastating locus swarms, or the massive floods they are encountering?

"The reality of the coronavirus in the U.S. is an unrelenting crush of cases and deaths.

While the worst-hit parts of the United States have seen new infections recede and hospitalizations drop after strict social-distancing measures were put in place, the country is still in the firm grip of a pandemic.

For every indication of improvement in controlling the virus, new outbreaks have emerged elsewhere, providing a steady, unrelenting march of deaths and infections.

As states continue to lift restrictions, impatient Americans are freely returning to shopping, lingering in restaurants and gathering in parks. New flare-ups and super-spreader events are expected to be close behind.

Julie Bosman, Mitch Smith and Amy Harmon report that any notion that the threat is fading away appears to be magical thinking, at odds with what the latest numbers show."

Your logic is simplistic and incorrect. Simply, the vast majority of us don't want to sacrifice our parents, grandparents, or siblings for selfish short-sighted people. And luckily, at least here in California, political and business leaders aren't bowing to the wails of the tiny minority.

Sure, it could be a "perfect storm" of multiple causes, but if 30 million people starve, and COVID19 related economic shutdowns are only responsible for 33% thats still 10 million deaths from starvation alone, and mostly children. Global deaths from COVID19, most of which are from people with preexisting conditions, will peak at maybe 2 million.

hamncheez (May 5, 2020 at 11:15)
@phclaw: The NYT has very little credibility. Look at the tweet about Biden that they deleted. Plus all these headlines you are posting are opinion pieces, not factual reporting of facts. Just look at the wordings.

Even if 100,000 people in the USA die from this virus, over 400,000 people every year die from medical malpractice. If you're under 60 and don't have severe asthma, you're more likely to die driving to Mont Sant Anne than dying from catching COVID19 at the event, even if you were guaranteed to come into contact with someone infected.

phclaw (May 5, 2020 at 11:23)
@hamncheez: You lost me at NYT has very little credibility - only the most culty of red hat maga idiots (who thankfully have no political or societal influence here in California) would believe that. Plus, the mortality of covid-19 is most likely far under-reported.

That article describes covid as being 9-44 more lethal than flu. And I know that's Scientific America, which probably is as persuasive as the NYT to you, since, y'know, it's science. I'm just glad you're not in a leadership position that has any decision-making authority during this pandemic.

fullendurbro (May 5, 2020 at 11:34)
@phclaw: I just want to point out that of the two people in this conversation, the one you're accusing of being a Trump supporter/bigot is not the who who started name calling and being a jerk first. You may not be a "red hat maga idiot" but you are being a dick.

Please just google "UN famine predictions", read whatever article source you want to, then re evaluate the true risk of COIVD19.

phclaw (May 5, 2020 at 12:21)
@fullendurbro and @hamncheez: ok point taken, I apologize for calling you a red hat maga idiot, although I’m still glad they aren’t in power, and am glad we’re still in quarantine. Hoping you guys don’t get and/or pass it on to friends, family, or strangers.

hamncheez (May 5, 2020 at 15:18)
@fullendurbro: well, except I'm slashing no berms on account of a shoulder injury and upcoming surgery. Part of the reason why I vent my frustration on the internet right now.
Post a Comment