Former freeride star Carlin Dunne has passed away. Dunne, 36, was best known to mountain bikers from his standout segments in the New World Disorder film series. He first rose to prominence as runner up in Race Face’s 2004 Ultimate Freeride Challenge contest. He used that momentum to land a spot on the legendary Kona Clump freeride team alongside luminaries like Robbie Bourdon, John Cowan, and Paul Basagoitia. Dunne's New World Disorder 6 segment was a particular standout as he crashed twice on a massive drop in Utah, before getting redemption a month later.

After his NWD days, Dunne transitioned to motorcycle racing and quickly found success. He was the first man under 10 minutes on the world renowned Pikes Peak International Hill Climb, and would win the event four times. He passed away on Sunday, June 30, 2019, after crashing near the finish line at Pikes Peak. Our thoughts are with Carlin's family and friends. We're sorry for your loss. 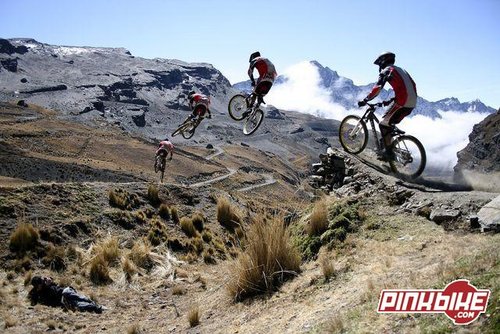 bretttippie Plus (Jul 1, 2019 at 0:28)
RIP Carlin. A great guy and incredible rider in all that he did. Will treasure our conversations about the world and bike stoke. My condolences to his family, friends and fans.

radek Mod Plus (Jul 1, 2019 at 0:14)
Last week I just saw Dust 2 Glory baja documentary where he was featured. This guy was a true searcher. RIP

FrEeZa (Jul 1, 2019 at 5:57)
Oh, the numerous times as a kid in which I screamed "holy diver" and sent it! How often we would all listen to Dio to get pumped and shred and then come back home drenched in sweat, covered in dirt and mud, carrying the most obnoxious and proud smiles as our parents saw us. Legends are never forgotten! Ride in peace, holy diver!

chris-adam-media (Jun 30, 2019 at 23:50)
I was wondering what he was doing now after rewatching NWD, this is very sad. Super talented guy, rest in peace

crash-brother (Jul 1, 2019 at 6:46)
Do yourself a favour today, find On Any Sunday: The Next Chapter and watch Carlin’s bits. Seems like a genuine awesome guy. As a fellow motorcyclist I was always amazed at his multi disciple skills. Ride on somewhere better Carlin.

yetibomb (Jul 1, 2019 at 6:09)
He was a awesome local hero in Santa Barbara BITD around the time he submitted his video part for the old Race Face challenge. He came in second I believe. I think this was the second year of the challenge. First year was Cam McCaul (first) and Matt Hunter (second). I forget who won the second year. Anyways this was like 2003-04. Carlin Dunne had gone out to Wade Simmons NWD3 Morongo Drop and stomped it. Pretty insane. That video was on loop in Santa Barbara shops. I recall seeing him around. Also stood on a few of his Goleta Beach drops. Crazy rough drops there. Anyways sad news for a great California rider.

scott-townes (Jul 1, 2019 at 13:40)
Yeah I remember there being a controversy because of Carlin hitting that drop but not winning because Klassen didn't go as big but was more well rounded of an entry. It was the best event ever in freeriding and I'm so happy it introduced us to such talented riders like Carlin. This is really sad news.

wydopen (Jul 2, 2019 at 6:18)
@scott-townes: Wayne goss won it with a street section. Everyone was hating on Carlin’s vid at the time for some reason. Little did they know he’d only been riding mtb for 6months at the time. I filmed his UFC video. We basically took a month and drove around the US and candid looking for all the big hits from nwd 2. He stomped the wade Simmons marzocchi truck drop like nothing and when we went to kelowna to do the Gerard gap he overjumped it 150’ to flat and didn’t even slip a pedal. (BMW shinburgers) that was on a bone stock 03 giant dh team with a crap rs rear shock and boxxer. After riding for about 3 months I took him to a norba national at big bear and he smoked everyone in 19-24yr expert like
Nothing. Had literally ridden dh a few times before that. Guy had
More talent than most will ever know.

scott-townes (Jul 2, 2019 at 8:49)
@wydopen: That's just insane. I remember hearing about him being a moto dude trying to get into the MTB scene but no idea about the extent of it. Unbelievable. Thank you so much for that info.

wydopen (Jul 2, 2019 at 15:10)
@scott-townes: I had been asking him to dig up the tapes because there was allot of other cool stuff that wasn’t in the ufc video. We did a zip line cam on this crazy wood feature in kelowna and did allot of helmet cam in the pre GoPro days where we were riding with a 5k$ camera in a backpack. He had this crazy plastic backpack for the camera. He had the tapes somewhere will post them if we can find them. The computer with the files died years ago unfortunately.

yetibomb (Jul 2, 2019 at 15:46)
@scott-townes: would love to see the UFC video again. I recall see other footage at the local shops in SB at the time. Blew me away seeing the Ellwood footage and then standing on those jumps in person. Rough AF landings.

bcroots (Jul 3, 2019 at 9:41)
@yetibomb: @scott-townes Just chiming in, I would LOVE to see footage of these clips if you guys find them, please put them on youtube or on pinkbike for the people to see. Anybody over the age of 25 was in awe of that guy when he hit the scene. Such an inspirational guy to elevate not one but 3 sports.

onemanarmy Plus (Jul 1, 2019 at 10:26)
Big loss. Dude was a real solid and genuine man. And he did it all and did it well. He was on pace to break the record again. About the same point he was talking about in the video of 2018 where he said... back off and lose or roll the dice. Huge loss. Sucks.

meathooker (Jul 1, 2019 at 9:28)
RIP Carlin - a true legend of multiple sports This has been weighing heavy on me since finding out yesterday. Briefly met Carlin when we both raced Pikes a few years back. I've been wanting to get back and race it again but hearing news like this always makes you take a step back and contemplate if its worth it.

mtntech (Jul 1, 2019 at 0:26)
Followed the race on the local radio station, heard them talk about him not making it to the summit and an ambulance going down from the top. It sounds like it was very close to the section he talks about in ducati clip. Very bad place to crash. That mountain is very unforgiving.

Cspringsrider (Jul 1, 2019 at 8:52)
Rip may you shred forever in the sky. The pikes peak hill climb claims a motorcycle rider almost every year since is has been paved. I live in colorado springs. He will sorely be missed. Holy diver forever

justanotherusername (Jul 1, 2019 at 1:53)
RIP, never nice to hear. Seems like a similar kind of race to the Isle of Man TT, huge respect to anyone with the mental capacity to take on such a race.

x-rider (Jul 1, 2019 at 1:00)
He will be remembered as a truely amazing and inspireing person. I'm glad to had the honor sharing a beer with you at our booth. My thoughts are with his family and friends.

droplover (Jul 1, 2019 at 5:52)
Very sad...he was one of the old school free riders that inspired my mountain bike riding. Time to watch all his New World Disorder movies again

KavuRider (Jul 1, 2019 at 6:37)
This sucks. I always really enjoyed his riding segments in NWD, he always went huge. Rest in Peace ripper. You will be missed.

giantwhip (Jul 1, 2019 at 7:27)
He pushed his Kona to new limits and inspired thousands of people. He needs to be included in the hall of fame

cougar797 (Jul 1, 2019 at 11:35)
This dude was a ripper on all things two wheeled. Lots of influence in several cool communities. He should be celebrated for being awesome and living with zero limits all the way to the end of his life.

oxide (Jul 1, 2019 at 11:54)
I only met him a couple of times, but he was a genuinely nice person. The MTB community is very small and the freeride community is even smaller, which makes things like this so tough. Condolences to his family.

sriracha (Jul 1, 2019 at 13:01)
For being such a bad ass on two wheels, he was an incredibly humble and nice person. A local Santa Barbara legend known around the globe. This is a tragic loss.

DHFX (Jul 1, 2019 at 14:18)
Man what a shock to hear this! Carlin was an awesome dude and one of my favorite riders to watch back in the day. Many positive vibes and prayers to his close family and friends at this time.
RIP (Ride In Peace) Carlin!

nightfox (Jul 2, 2019 at 11:45)
So sad. He was one of those you could easily recall from the NWD movies, an original gangster. Googled him few times through the years to see what he was up to. He was super talented and lived life to the fullest. RIP.

gotflow (Jul 1, 2019 at 9:04)
Those early freeride movies and contest where such a inspiration and made the sport what it is today. RIP and ride forever

scotttherider (Jul 1, 2019 at 10:21)
Legend of the glory days of freeride! Doing big shit on sketchy ass bikes compared to what we have now!

meepmurp (Jul 3, 2019 at 14:12)
Damn. I shoulda left that song out of my Ant Hill/Collective/Kranked throwbacks playlist. RIP rider.