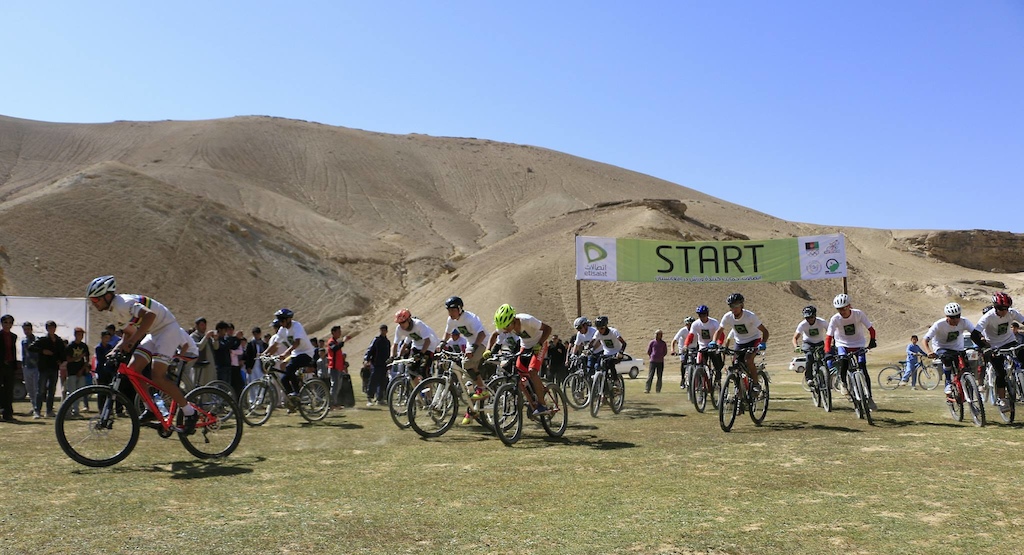 On Friday, Sep 28, Mountain Bike Afghanistan in collaboration with the Afghan National Cycling Federation (ANCF) organized the Hindukush MTB Challenge, a cross-country mountain bike race in Dragon Valley near Bamiyan City in Central Afghanistan. For many people, it was the first time they had witnessed a mountain bike race in their lives. In the past few years as cycling has become more popular, there have been a few scattered mountain bike events across the country, with most of them taking place on paved roads. But this is the first time an entirely off-road bike race in the style of an XCO (Cross Country Olympic) event happened in Afghanistan. Our goal behind promoting the sport is to make it very popular among the youth with the long-term hopes of discovering and supporting Olympic-level athletes from Afghanistan. 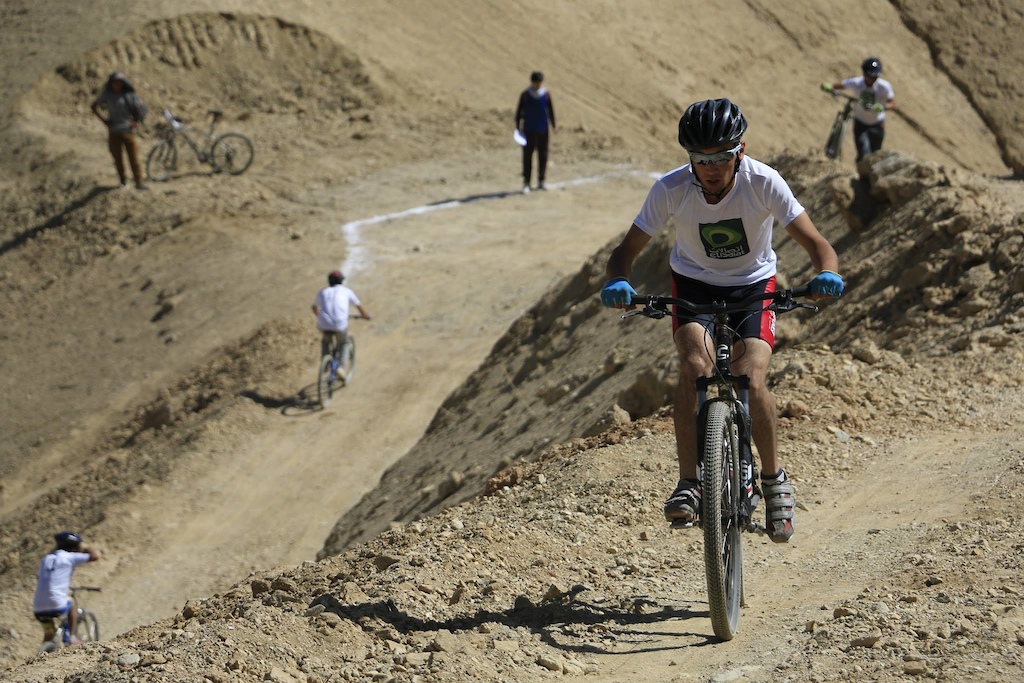 Mahdi Mohammadi, winner of the men’s race. He urged his fellow riders to work very hard, and bring strong results in national and international competitions
Unlike most inaugural events where mishaps, pushbacks and lack of interest are common, the Hindukush MTB Challenge proved to be a lively event packed with 50 racers, twenty of whom were women. It was also full of spectators thrilled to see their town transformed to a fun venue for the day. Everywhere, there were people watching; from the start line to the top of mountain ridges. The success of the event and the show of support by the locals exemplify a progressive young Afghan population with a deep desire to unburden their country from narratives of war, and for this niche crowd, to work their way into international bike racing.

The event was also among the first to host both men and women races. Until very recently, women’s cycling was frowned upon in the Afghan society. It still is in much of the rest of the country. Only in Bamiyan, women can ride more freely and without facing threats of physical harm. This has led to the formation of several female-led cycling clubs. The winner of the women’s race applauds the organizers for including a women’s race. She said, “many people think mountain biking is very hard, so women shouldn’t do it. This event proved them wrong, and it encourages more women to ride.” Her mother urges other parents to let their daughters ride. She said, "I hope more girls and their parents will draw interest from my daughter's performance." 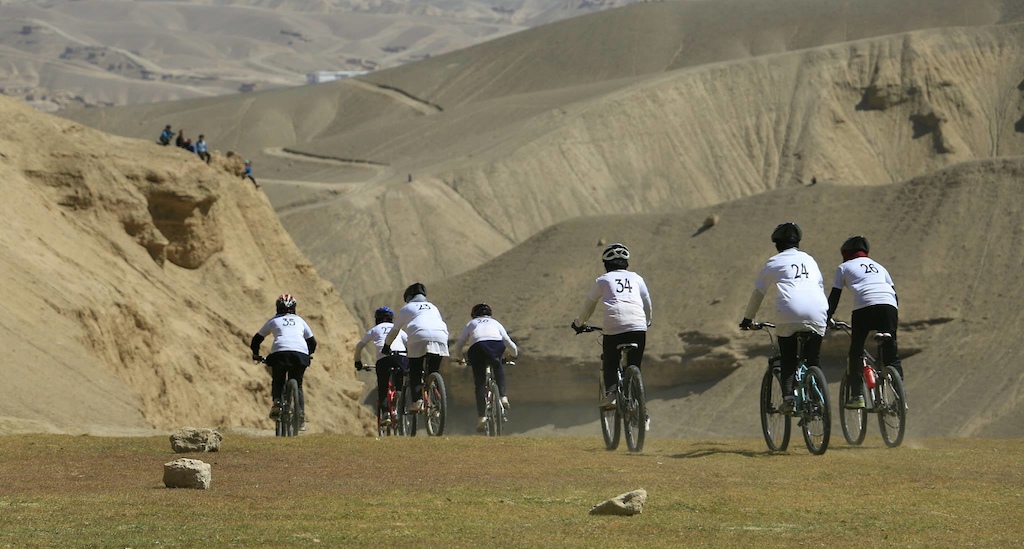 Twenty women participated in the race, which is a very high and promising number, given the obstacles they face in Afghanistan for riding bikes
Though the race is nowhere close to the level of experience and glory in European and North American events, it is a beginning for Afghanistan. And it is an exciting one too! The enormous attendance of racers and the enthusiasm of the local community proves that mountain biking has a future in Afghanistan. Who knows, before long, Afghanistan will become a prominent contestant in international mountain bike racing as well as a destination. 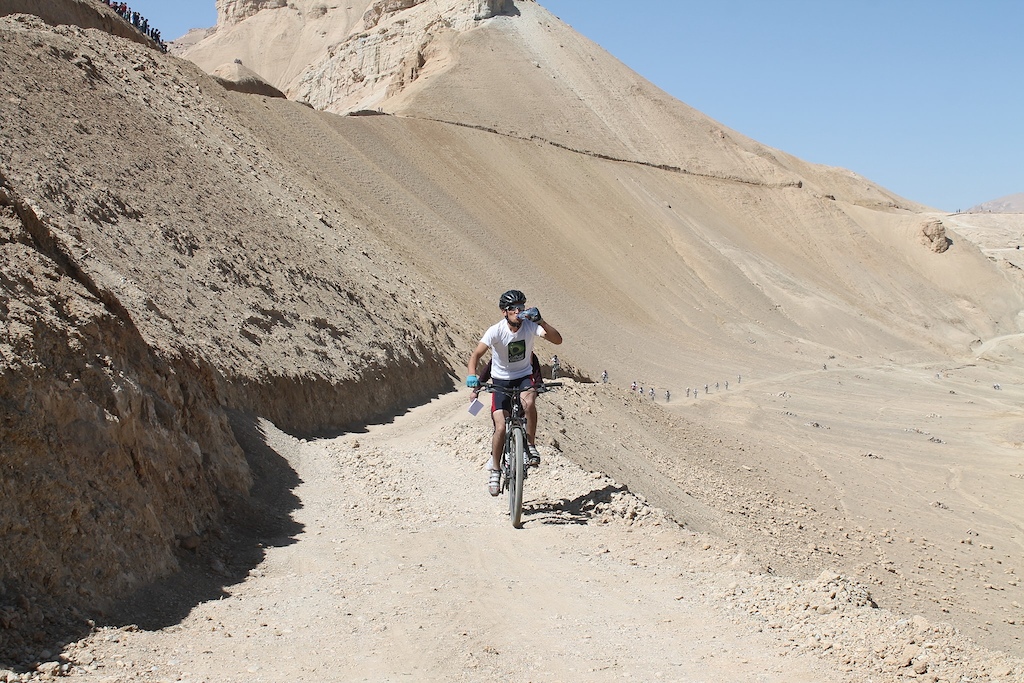 Mountain Bike Afghanistan is a non-profit aiming to promote the sport in Afghanistan and build the necessary infrastructure for its growth. Our mission is to empower Afghan youth with the joy of riding and competing on mountain bikes, as well as to connect people across borders and cultures through their shared love of the outdoors and the sport of biking.

ilovedust (Oct 3, 2018 at 1:57)
Brilliant. I love seeing positive news stories about countries like Afghan and Iran. We are just always bombarded with political negativity yet that is rarely a reflection of the people. And to embrace women as well is such a cool thing challanging what are preconceptions often are. Good luck riders!

Krzymndyd (Oct 3, 2018 at 5:18) (Below Threshold)
@Weens: maybe you should go to a race then because there is a good number of women riders

joebmx (Oct 3, 2018 at 15:12)
@Weens: I think what is impressive about that number is that proportionately it's pretty close to the make up of the demographic. A 60/40 participant spilt is pretty awesome. Hopefully they can keep it from turning into the 90/10 that we have everywhere else in the world.

T-Bot (Oct 3, 2018 at 2:03)
As an Afghan veteran I have always said the mountains there are awesome, maybe for some very remote backcountry snow adventure but so dusty and rocky for a bike.
The heat of that place was unbelievable in summer and frozen in winter. Would be amazing to see bikes changing the world for the kids over there, maybe that will stop them picking poppy’s or joining some fundermental organisation.
If you do ride there, don’t camp in the caves, it’s like from The Hobbit, you don’t know what you will find in there.
Maybe get some kind of Tyre protected for the land mines, a nice Kevlar weave would work well.

constantly-broken (Oct 3, 2018 at 5:18)
I thought I was one of the few that looked at the hills behind TK and thought "Jeez.......could make some wicked back country lines down that ridge line........flat drop off that one, hip into that re-entrant etc etc"

It is great to see it expanding over there, they even have their own little street scene up in Kabul which is sick.

ericls (Oct 3, 2018 at 6:55)
@rabbit-Tbone: every time I did convoy escort from KAF to the different FOBs I coundn't stop myself from scoping out line as I scan my surroundings while going thru hilly areas... the place would have lot's of potentiel if it wasn't for the different dangers that exist there.

LeDuke (Oct 3, 2018 at 8:30)
Afghanistan reminded me of Colorado. Spectacularly beautiful country. The areas that we drove and walked through along Highway 1 would be amazing on a bike. Probably already have plenty of pre-built trails from the sheep and goats, too.

mensch-mueller (Oct 3, 2018 at 5:13)
That is probably the best news today! Seeing Afghanistan shaken by nearly 40 years of war, this is really a good sign!
And a starter field of 20 women, is just unbelievable. Hope that many of the watching kids discover biking, because looking at the pictures, there is so much opportunity! img src="https://es.pinkbike.org/246/sprt/i/icon_wink.gif" alt="Wink" class="emoticon">

yfrnaks (Oct 3, 2018 at 10:02)
This is great to see a movement towards finding peace this way. I know there's even a freeride/trials/freestyle movement going on over there too, that club is called Drop & Ride Club and they can be found on FB.

I know a lot of the youth in these cycling clubs out there and they're getting tired of the violence, so I'm always stoked to see this kind of stuff out there!

Sshredder (Oct 3, 2018 at 9:46)
A positive story about Aganistan. I hope in the future I see edits of people shredding the mountains. Encouraging woman to participate will help liberate the minds of next generation of people from Afghanistan to enrich thiere lives . I can't comprehend how complex the culture of Afghanistan is . I prefer to observe the positive out comes from Afghanistan as the country matures .

mogs (Oct 3, 2018 at 11:40)
Puts wheelsize and standards into perspective. We should be thankfull most of us can ride freely. Give gratitude everyone!!

thegeologist (Oct 3, 2018 at 5:04)
This is cool to see, hopefully the sport will take off. I bet you could make some epic trails in those mountains!

also like to draw attention to the brilliant work by www.skateistan.org

drunknride (Oct 3, 2018 at 10:19)
I tried a hindukush mtb challenge. More cheeto eating then riding though

mishspins (Oct 3, 2018 at 4:52)
Do foreigners still need an invitation from an Afghan national to get a visa to afghaniatan?

stefanroussev (Oct 4, 2018 at 8:09)
Great news. This is what the world needs more of. Very happy to see peaceful events like this to take place in the parts of the world where violence is an everyday thing. Just keep at it. Let there be Peace.

Ducimus (Oct 6, 2018 at 8:30)
I spend six months over there. The entire time I was think what a great place to mountain bike. Think side walls only!

andrewmparker (Oct 4, 2018 at 22:31)
Kinda looks like a cool freeride zone
Below threshold threads are hidden