Mountain Biking the Roof of Ethiopia 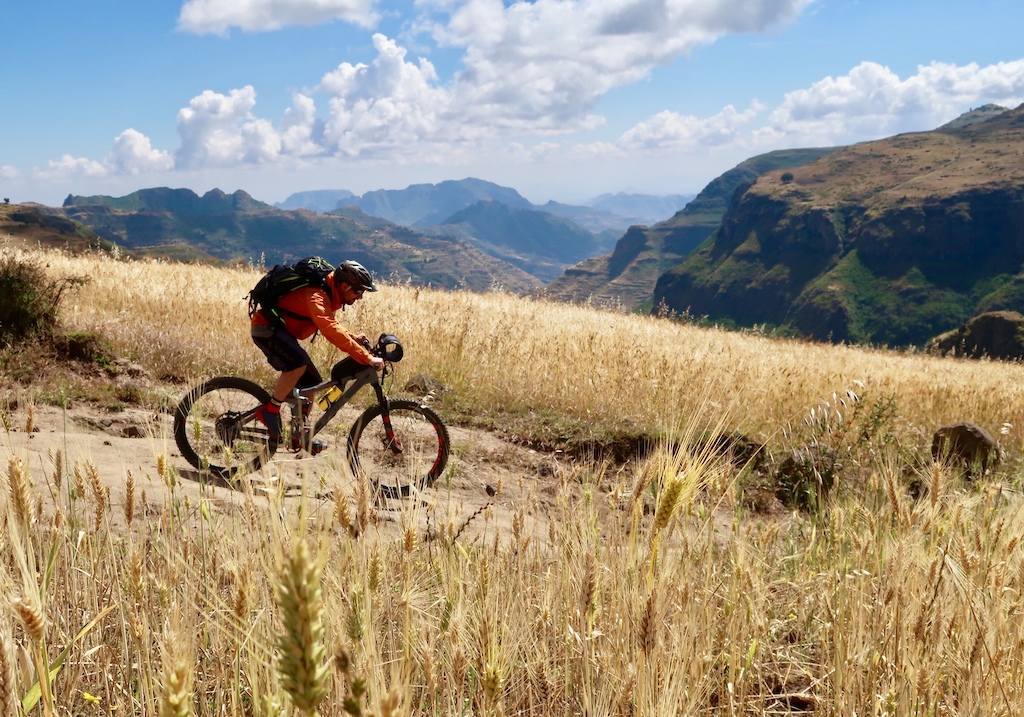 The entry of the Simien park

ETHIOPIA - The Velvet Fist in an iron glove


After many discussions in the winter with my friend Guillaume, our choice was made, we are going to head to Ethiopia. Trails full of oriental perfume, burning incense odors, and big mountains not really known for mountain biking.

It’s a simple plan on paper, start at Bahir Dar (Blue Nile Springs) and get to the roof of Ethiopia, the Ras Dashen (4543 m). Just 450 km of pedalling on the way.

After a turbulent start at the airport, here we are, pedalling along Lake Tana towards the north of the country. Unseen landscapes, nice people, everything is here for a great adventure. Even the traditional Turista, who stops us to sleep in a village after the first ride of 70 km in 35 degrees heat. 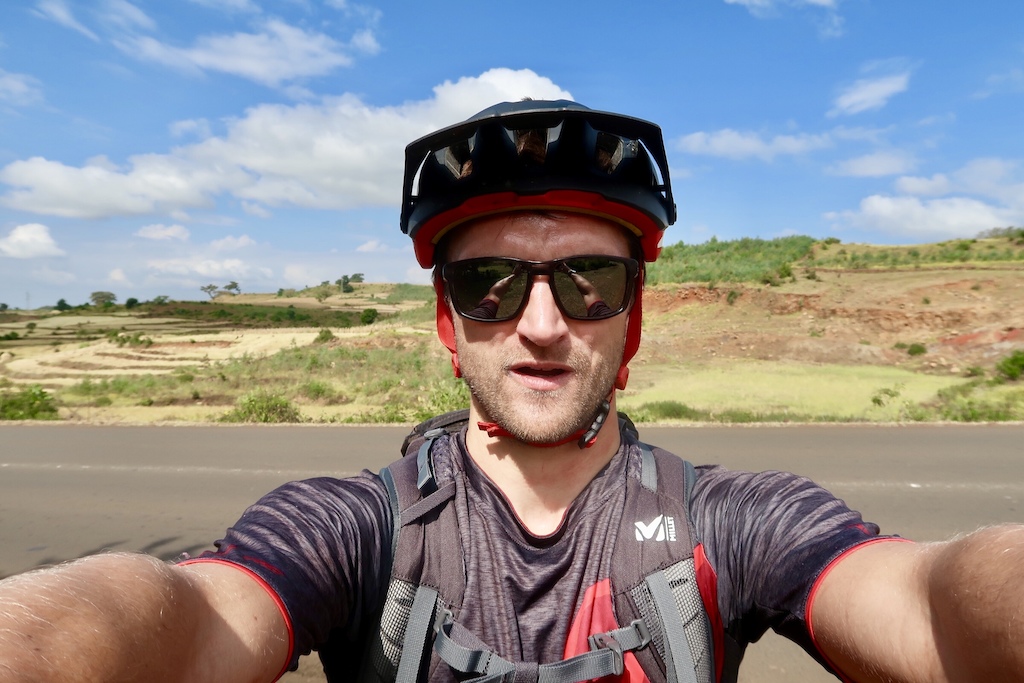 The first day, along Lake Tana, we are not already tired 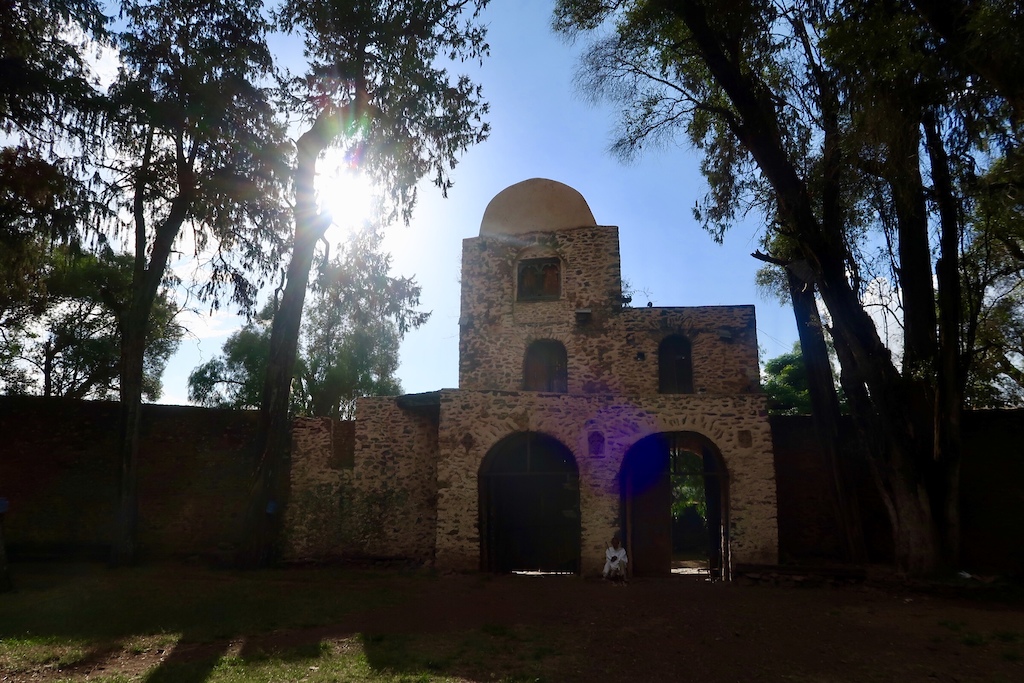 
It gives us some time to admire the beautiful colours of the rising sun on the Barley and wheat farms. 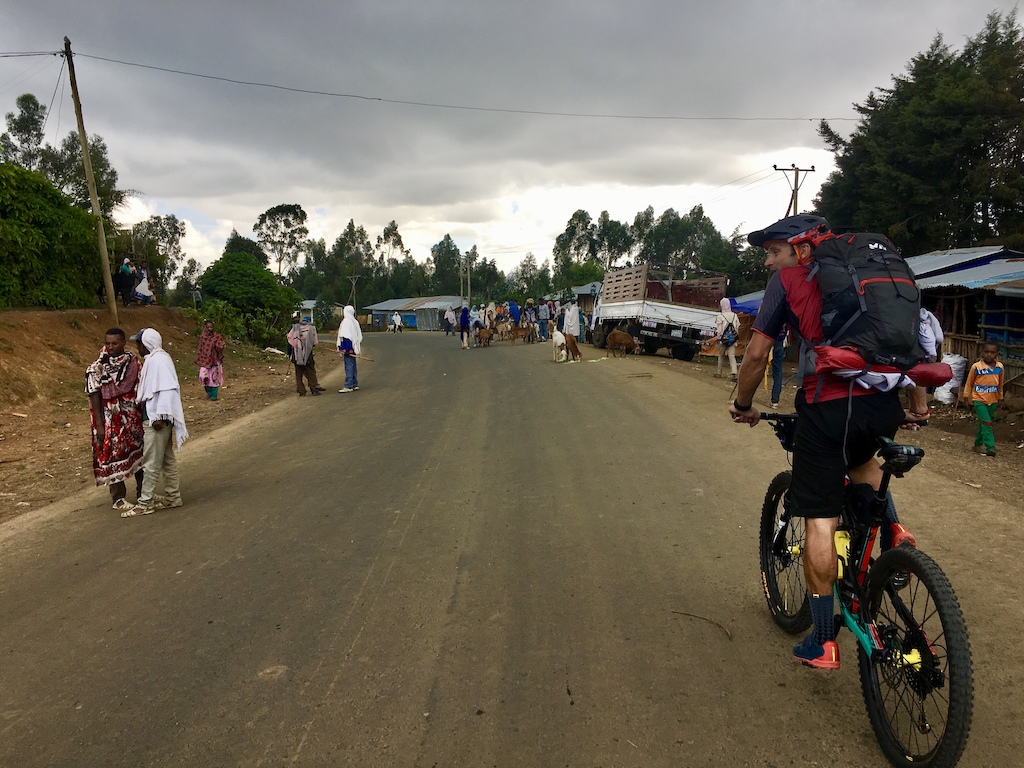 Three days later we arrive in Debark (2850 m), the entry point of the trekking mecca in Africa.

We sleep in a small lodge for several days, waiting to get all the authorizations and access to the Simien mountains, the first Unesco Park. Dawit, my local contact is getting a bit desperate. Despite the promises we received in the summer, we won't be allowed to get into the park if we don't have a 4x4 vehicle following us. Actually, the only mandatory thing to enter is to be with a "Scout", a sort of war veteran armed with an AK 47 who will protect us from wild animals or any other possible attack (this are actually really rare). He won’t walk all that way, and it's not possible to rent a horse. I don't know if I'm a purist but being followed by a car doesn't make me... very happy. I want to stop, out of principle.

But we are here because of these mountains.

The old Land Cruiser is going to follow us for the next three days. Worgo, the scout will follow us or leave us alone on certain trails depending on each spot. Firew, the driver, looks straight out of an American TV action series with his perfect English. 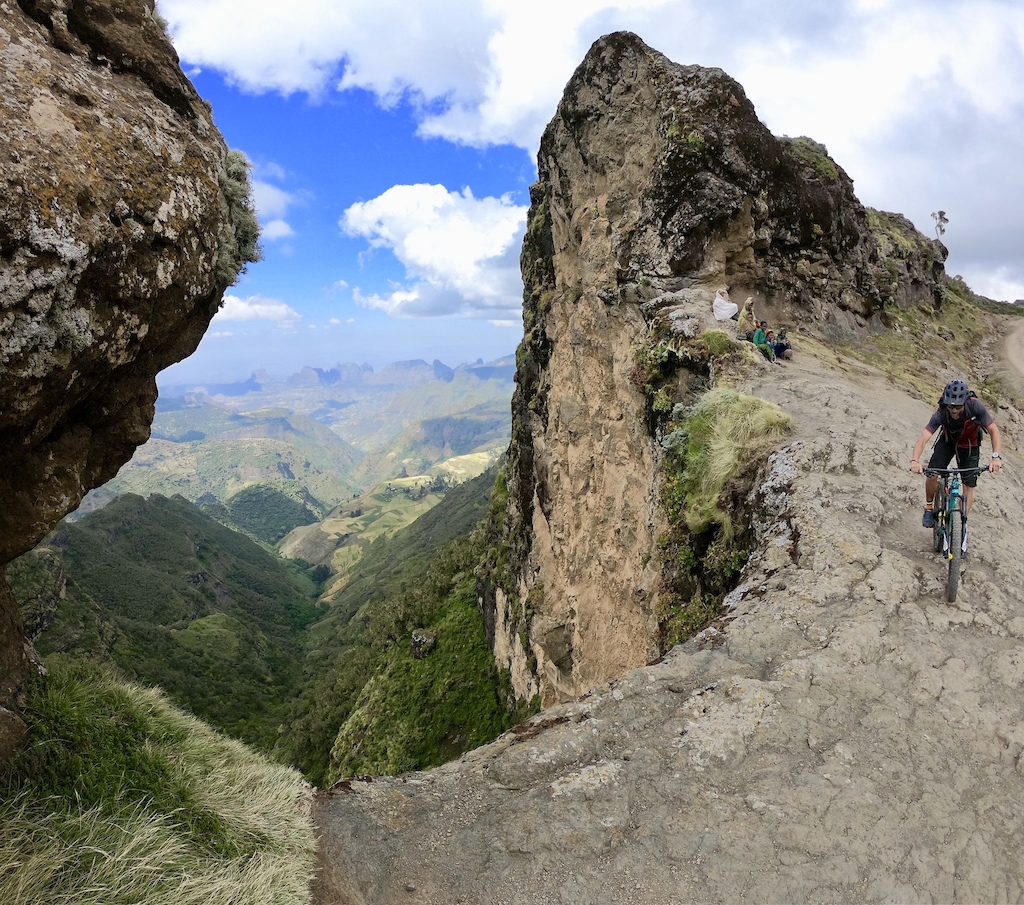 Amazing viewpoint on the first day

The first stage is 75 km with 2000m of elevation to get to the first base camp at Chennek ( 3650m ). Herds of sheep live among the wheat crop along endless cliffs in a dry atmosphere. Around a switchback, I come face to face with a group of baboons. I keep my distance and try not to disturb them, but after 2 minutes they are all over our bikes, examining all the bike's specs. A privileged instant, from the tourist buses. We arrive in Chennek. 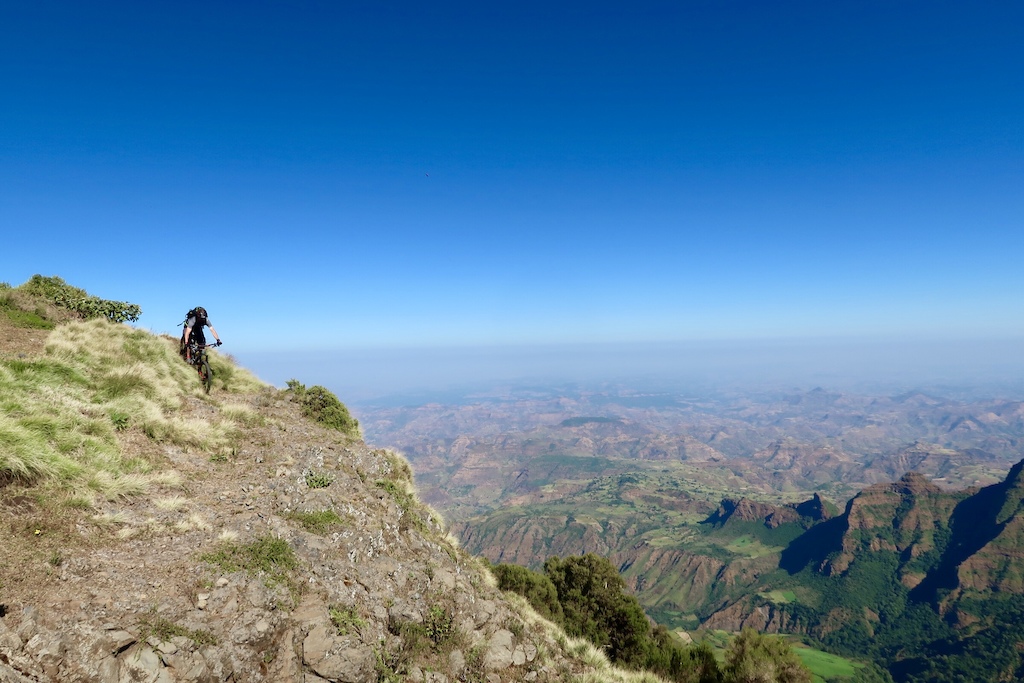 Enjoying the ridge on the way to Chennek 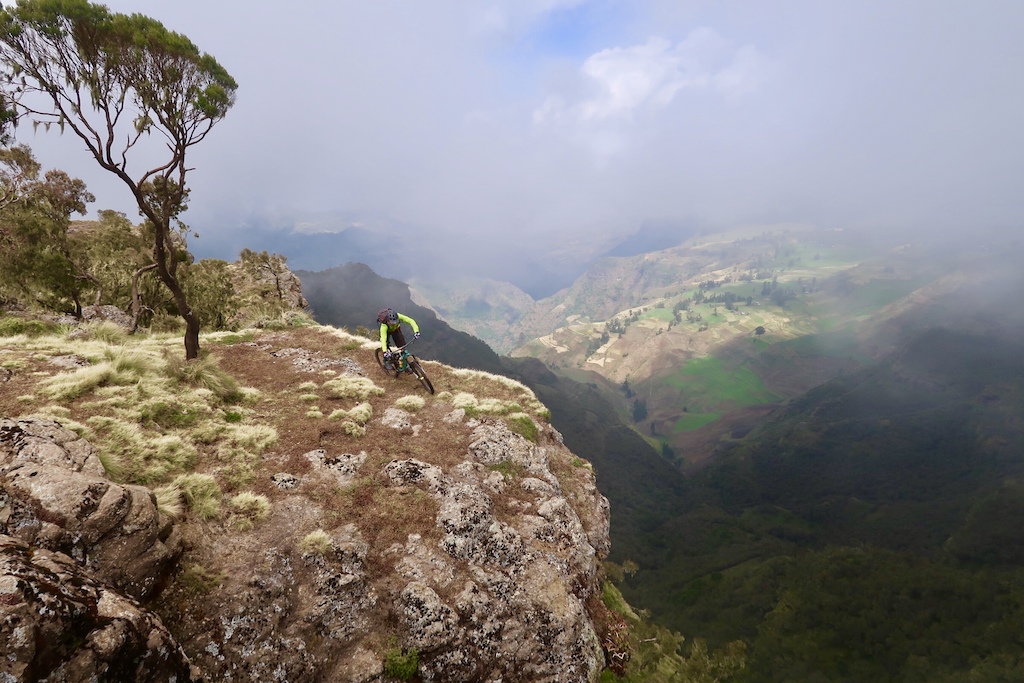 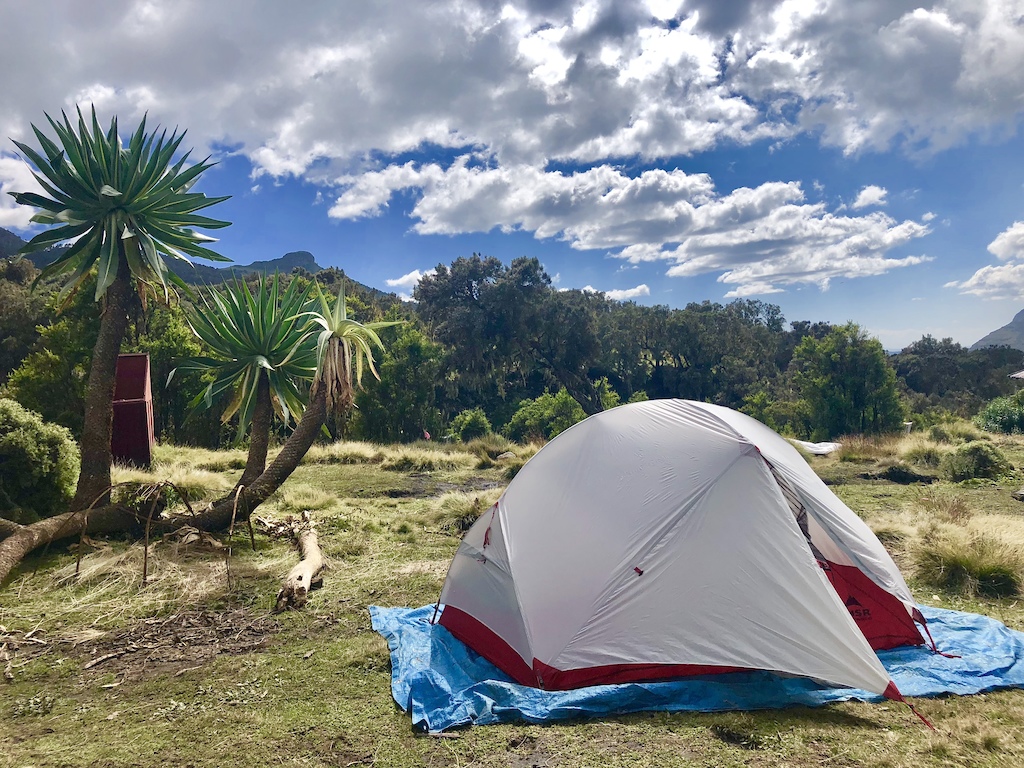 Firew has a proposal for us, instead of trying to get to Ras Dashen in 2 days early next morning as planned, why not go really early tomorrow, to do the Mt Bwawhit (4437m) and then the Ras Dashen before coming back into the valley? The broken road after the first summit will make Worgo walk with us. We do not know yet, but we are attempting the first ever pass by bike. 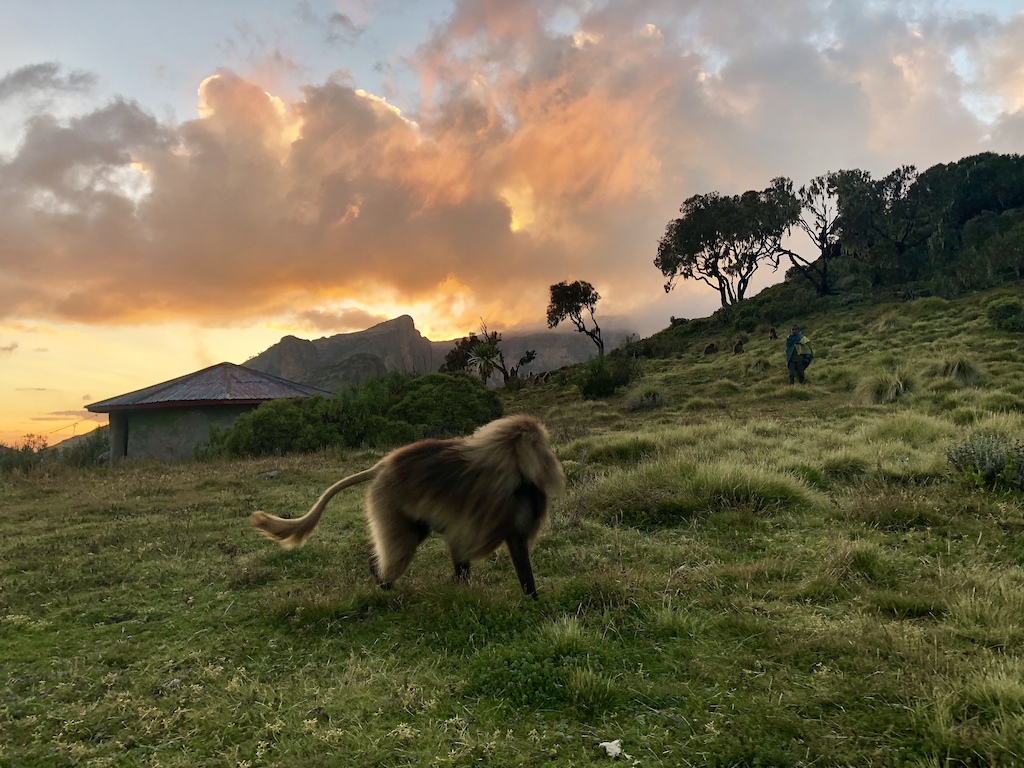 Enjoying the evening at Chennek basecamp (3600 m) with baboons 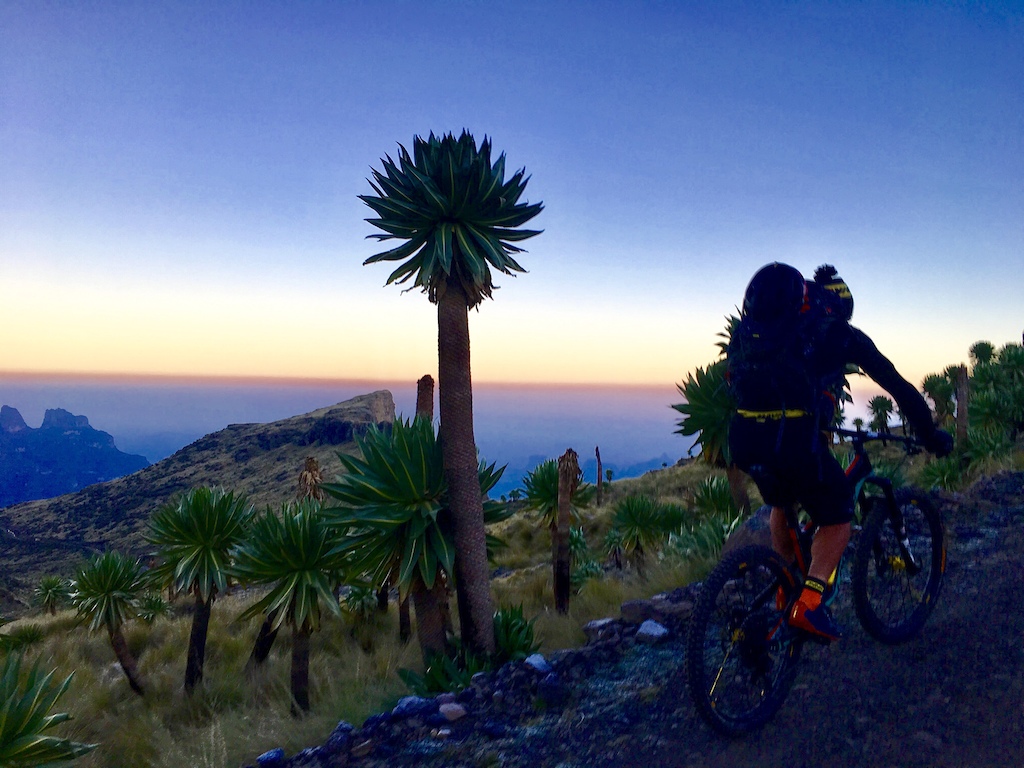 Early in the morning to the first summit!

The first climb is done at 7.30am and we transfer to the East side. Sunshine, incredibly big and magnificent mountains, with canyons as big as the American Grand Canyon. 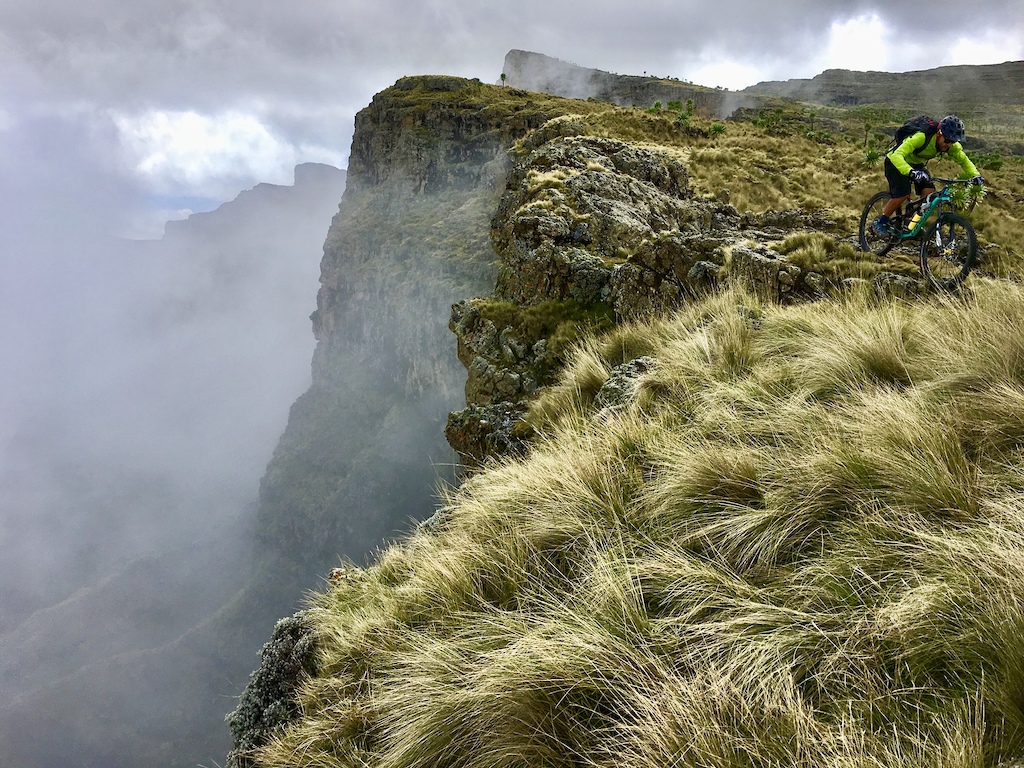 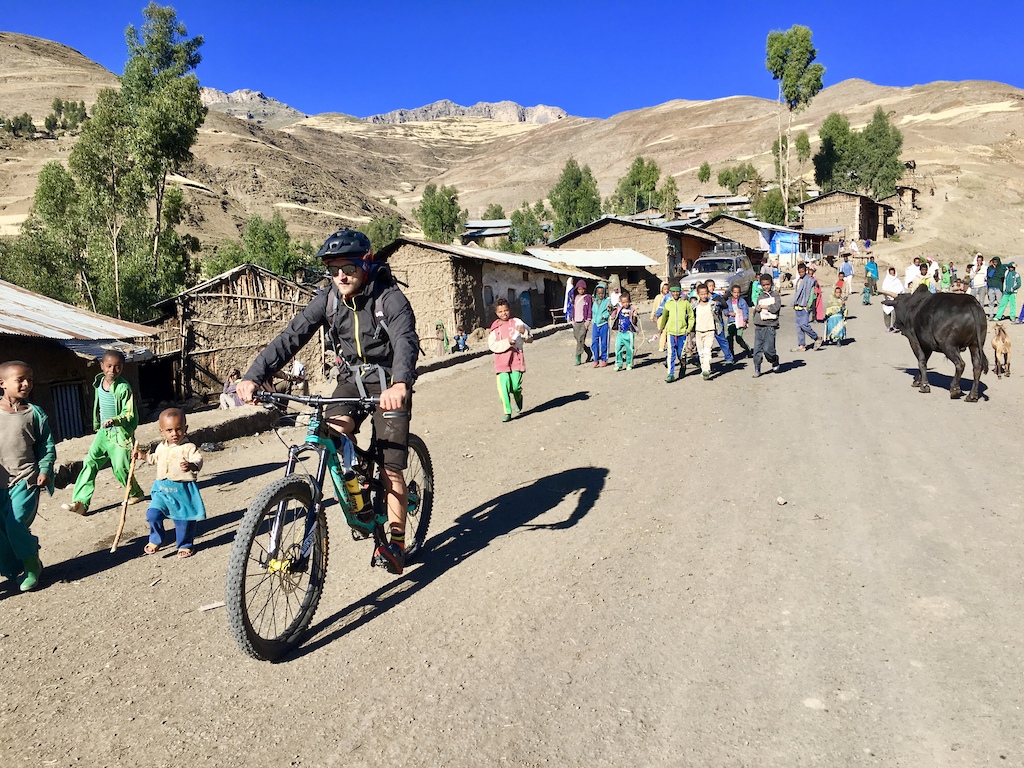 We ride through chiro leba ( 3100 m ) before the last big climb to Ras Dashen (4543 m).
Just one stop on the way at the evening’s campsite (Ambiko, 3100 m) to leave our tents and equipment there to lighten up for the final ascent. The climb is quite hard, and we arrive in the village at 11.00 AM. A teenager proposes to keep our stuff till the evening for some Ethiopian Birr. We will see if our kit is still here in the evening... 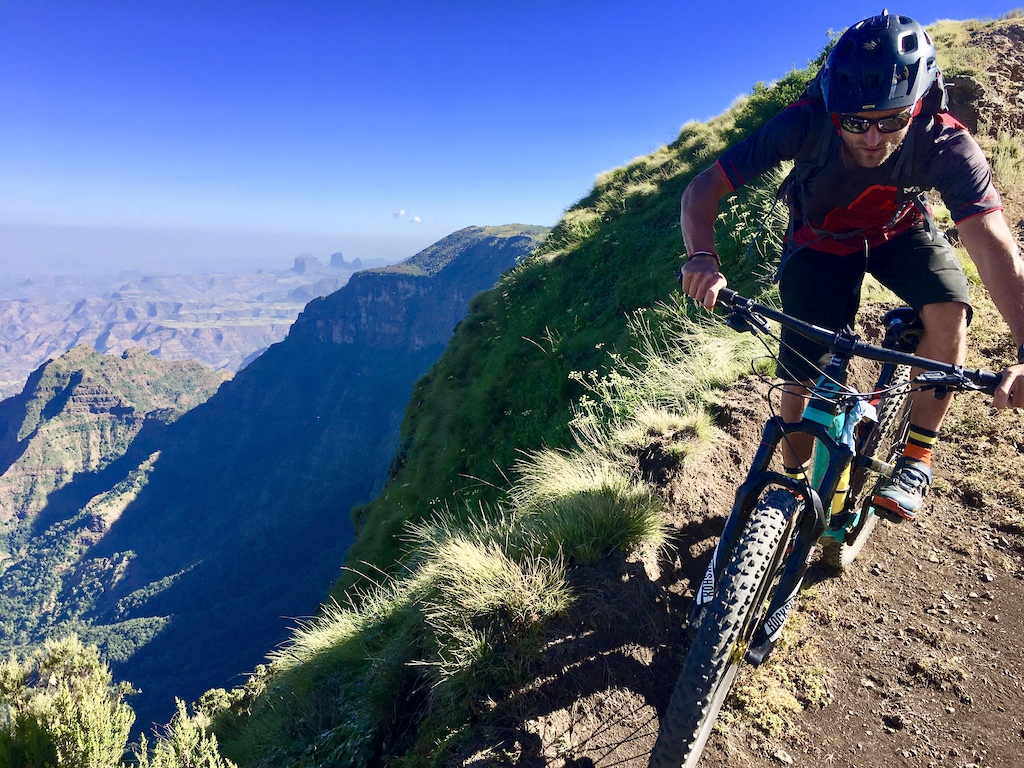 Riding the ridge of one of the world's biggest canyon

The way to the top is long but very high too. We start to feel the first climb of the morning in our legs, and the altitude doesn't help us either. We will have to manage our efforts. 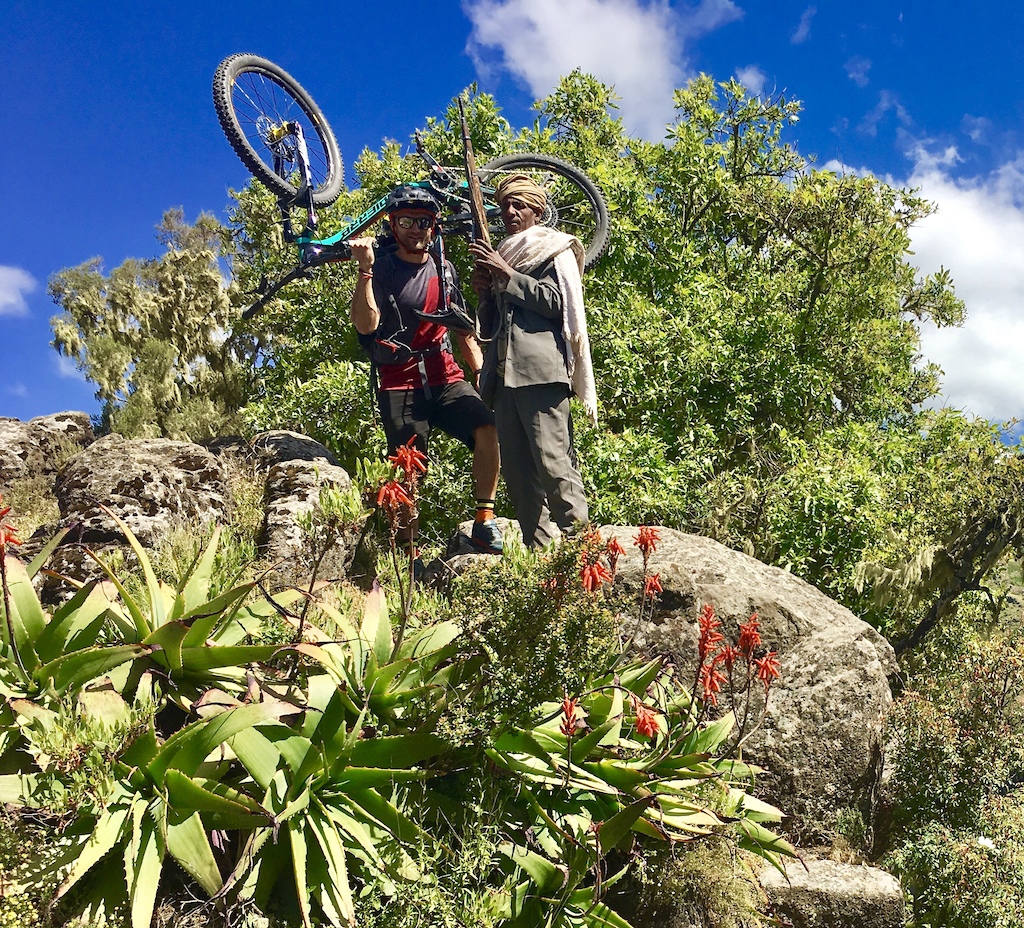 Proudly in front of the Jin Dahir Waterfall

The sun is burning into us all the way up. Worgo, with his gun over his shoulder, follows us faithfully. But he is overheating, probably due to the ancient suit that he is wearing. He also has sore feet, probably due to his plastic flip flops… We are far away from the western trail runner but believe me when I say that he is just as fast! He also takes care of overly enthusiastic children, looking to benefit from the farandijs (tourists). The day is rapidly advancing and I’m starting to doubt our chances of success. “Maybe it’s better to stop and come back tomorrow?”

But Worgo, initially apprehensive about the crazy idea to link up the summits, now makes it clear that we shouldn’t give up at this point. We don’t speak the same language, but we understand each other. The language of the mountains, a passion if you like, is universal. 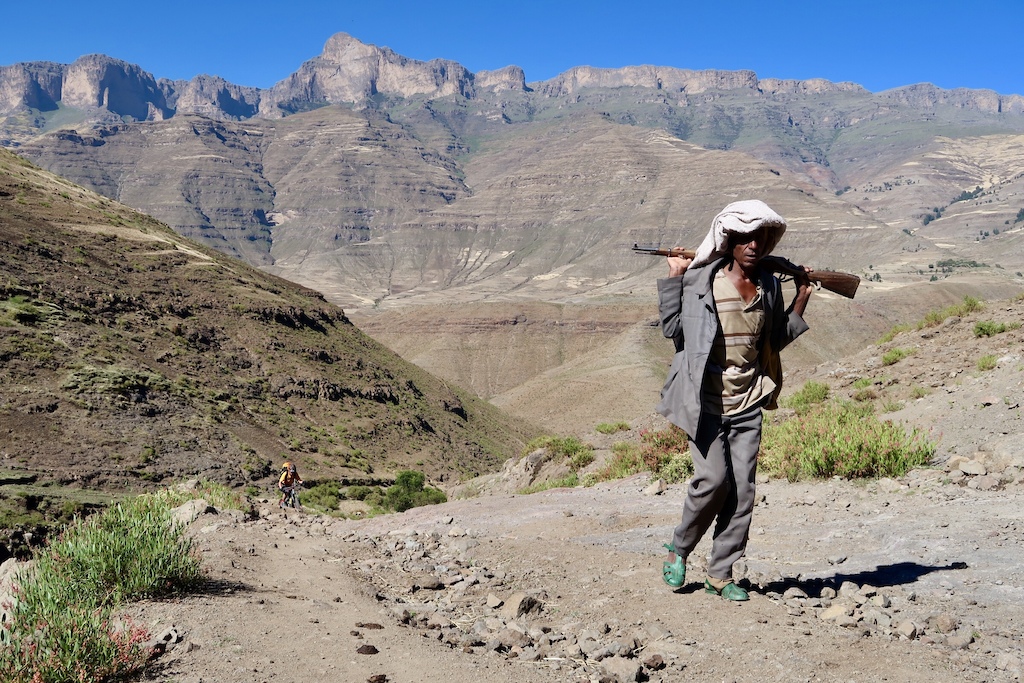 Mt Bwawhit in our back, let's go to Ras Dashen!

Guillaume is battling with himself, after 11 hours under the African sun, we find ourselves at the base of our grail. 50 metres of rock separate us from the concrete monument perched on the roof of Ethiopia. A local child guides me to the summit. Magnificent. 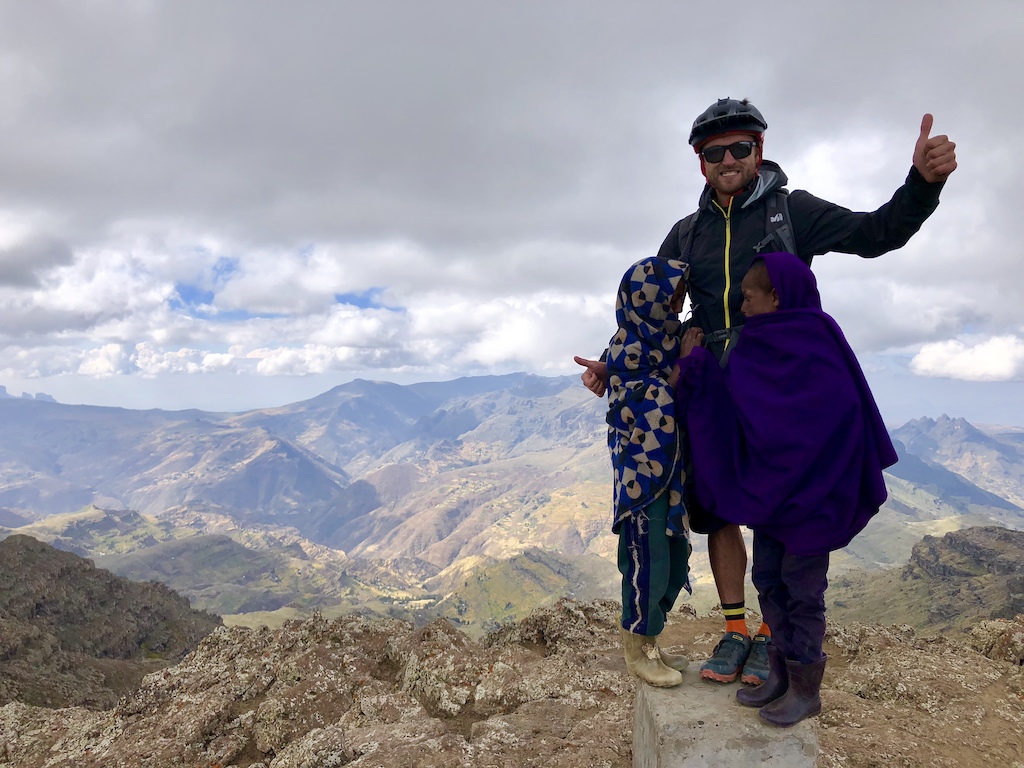 On the roof of Ethiopia with our young guides

We make the most of being up here before attacking the descent through rock gardens, followed by tropical prairies and single track freshly cut into the black soil. I’m starting to worry about getting back to camp before nightfall, especially for Worgo, who is still on foot. I shouldn’t have worried. This fifty-year-old would be esteemed to be an extra-terrestrial, even in my adopted home of Savoie! 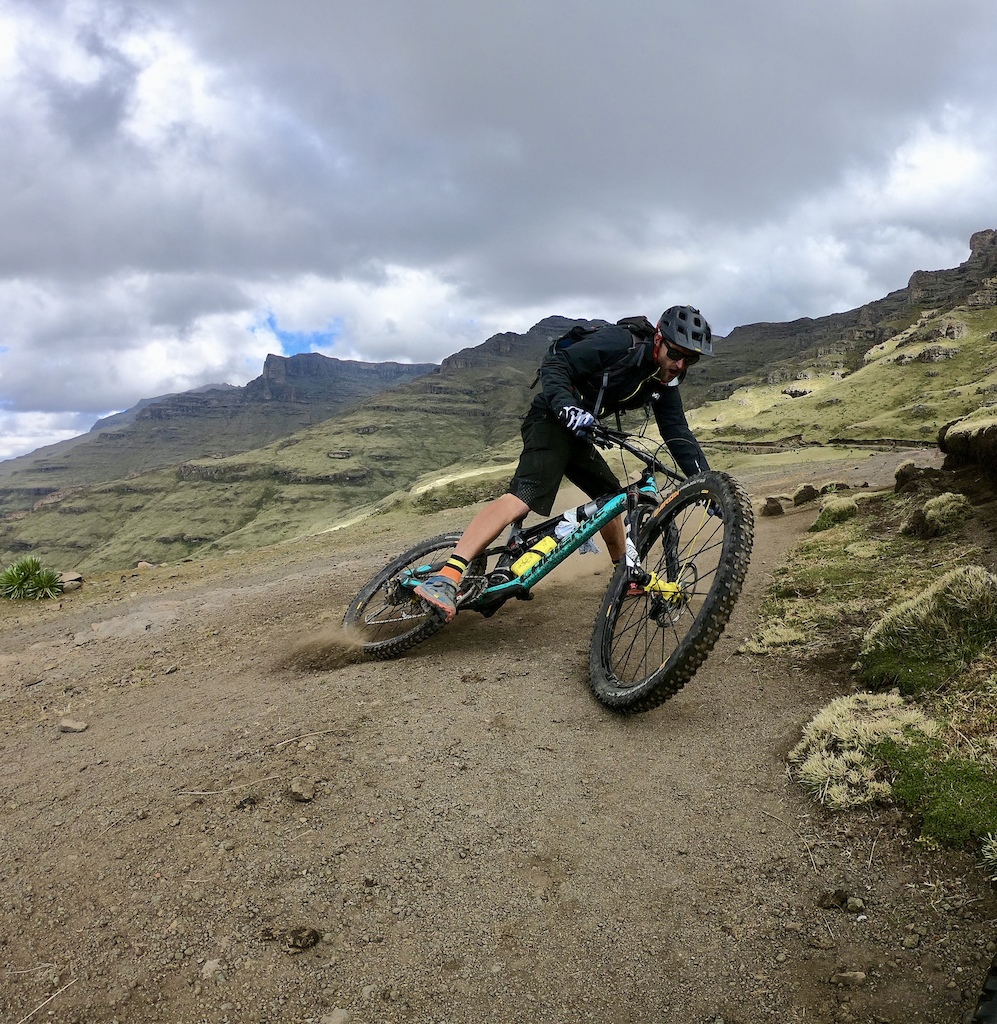 We enjoy the way down from the roof of Ethiopia 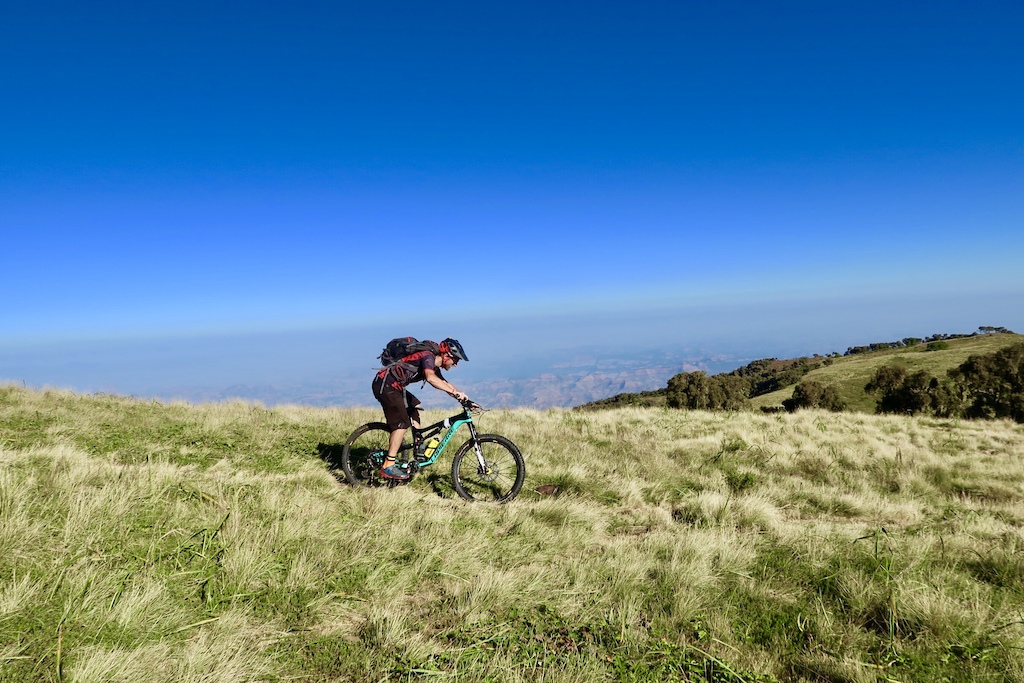 The welcome waiting for us back at camp is almost too much for us after our efforts. 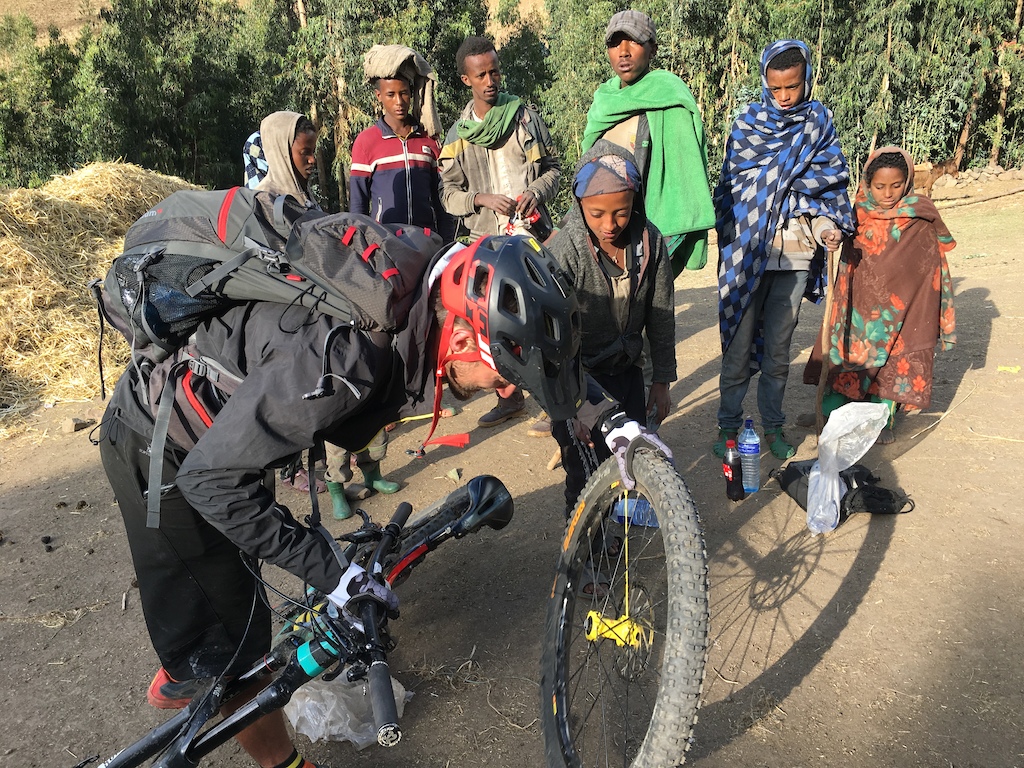 After 12 hours on the bike for the big mission, we get a warm welcome at the base camp. 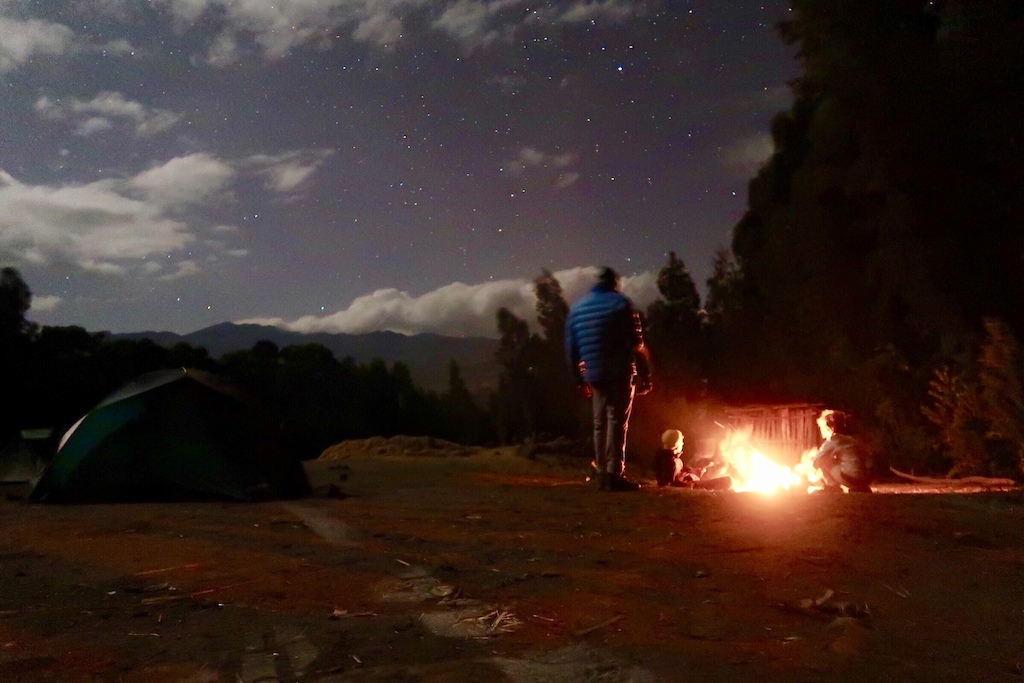 Nice campfire after the final mission
That evening we re-join a group of trekkers that we met the day before. Around the campfire, we have Ethiopian scouts, a Savoyard, a Belgian, an American, two Alsaciens-come-Savoyard. But for me, that is the beauty of the whole experience. The evening passes us by with tales in the firelight, some are funny, some are not. But this is a unique experience under the Africain night, with nothing but the stars in the sky to build our dreams.

The next day we head back to the village of Chiro Leba. Only now, Firew informs us that we have accomplished what nobody else has yet attempted to do. 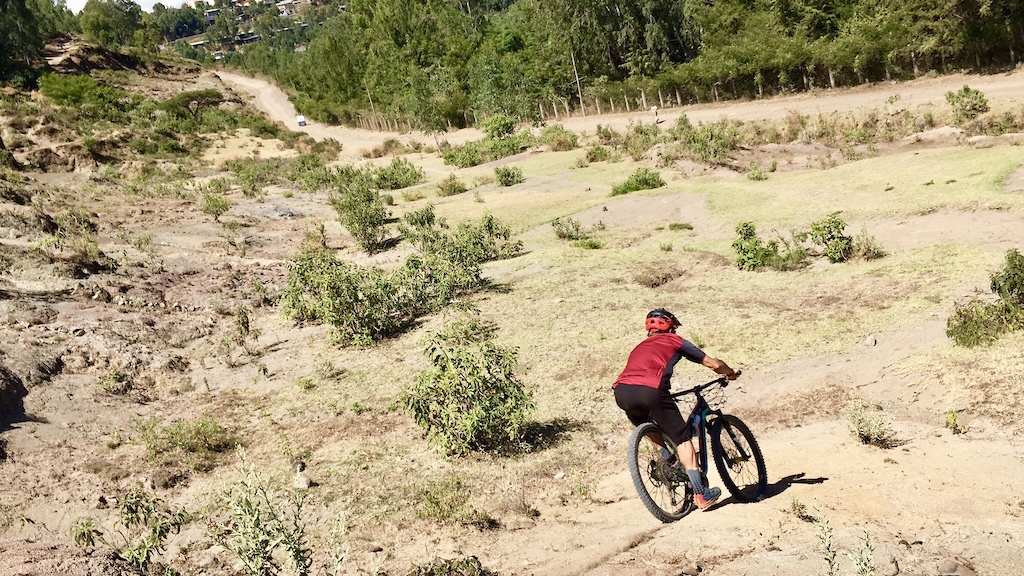 The 16th day, we have a smooth ride on the jumps and trails around Gondar

Ethiopia was sometimes hard towards us, sometimes welcoming, always authentic, true to itself and never half-arsed. It was without a doubt one of the most unique and remarkable trips that I have had the chance to do.

stifford (Feb 21, 2019 at 23:10)
I am convinced Ethiopia will at some point be a mtn bike mecca (not that far from Mecca actually). Only a 5-6 hour flight from European capitals. I lived in Addis four years and mapped about 70km of the best long natural trail bike descents I’ve ever ridden in 5 continents (see Trailforks Menagesha trails). Miss it deeply.

grugged (Feb 22, 2019 at 7:40)
Without a doubt Steve, Menagesha trails were epic. You guys did some awesome work mapping them out! Trails round Addis are great too and easily accessible!! Add in great food abd climate and super friendly people and its the perfect holiday!!

WAKIdesigns (Feb 22, 2019 at 5:19)
@neilbarkman02: how would you call someone who drinks anything and says that paying too much attention to it is snobbery? (which would basically equal someone riding a 500$ HT with Tora fork or 2005 Bighit and calling anyone spending more than a grand on a bike a bunch of snobs?)

James-R (Feb 22, 2019 at 6:07)
The birthplace of all coffee, would love to visit but wouldn't be too keen on the way they traditionally prepare it: roasted black beans, ground, hot water and pinch of salt :-o

Benen1 (Feb 22, 2019 at 10:42)
Very nice. I've hiked Ras Daschen twice and always wanted to mtb it. There is great mtbing in northern Ethiopia, I brought my bike to Gheralta once and there are great trails all over. I wasnt mad on the attitude of guides in Debark and the locals in the Simiens in general. Also the park is very badly kept. Still a stunning place, as your photos show but a pity nonetheless.

jason475 (Feb 22, 2019 at 0:48)
The most incredible scenic bike trip photos I have seen. Screw Wally World kids. Change the Trip Tic, load up the Family Truxster....Were going to Ethiopia!!!

Mattin (Feb 24, 2019 at 4:49)
Loved this article! Big respect for you guys for going on such an adventure. This type of articles are the best ones!!