Join Pinkbike  Login
3 Comments
Not Afraid to Fall: Brian Hall is many things—a published author, public speaker, loving partner, friend, community caretaker, and a devoted cyclist. He has dedicated his life to sharing his story with the intention of removing stigmas, transforming being the “other,” and bringing people close for intimate conversations and connection. Brian's symptoms of Parkinson's disease started at age 14. His high school basketball coach noticed his movement was being hampered by intermittent foot cramps, as he ran the length of the basketball court. This was the beginning of a very long and frustrating medical journey. For years, the uncertainty of Brian’s condition left him with a great deal of fear and doubt about his physical future. Then, in 2013 almost 20 years later he got a bicycle, and his entire world changed.

True Story - Miranda Miller: Miranda Miller’s journey to the upper echelon of global gravity racing has been a long and hard one, defined by years of juggling work with training and travel on her way to becoming a full-time professional racer at the age of 27. Growing up in Pemberton, British Columbia before moving to the nearby mountain-bike haven of Squamish, Miranda was blessed with world-class trails that would shape her into one of the planet’s most elite racers. But it was a decade of working side jobs to support her privateer race schedule that enabled her to truly emblazon her name onto the international racing map. All of this work has provided deeper meaning to her quest—and it also has afforded a balanced lifestyle that’s made achieving race results all the more rewarding. Miranda knows that the results themselves cannot define her as a person, and she wants to do more for the community than simply showing up to races, spraying champagne across the podium and then flying back home. She wants to tell stories about the places where she travels, the people she meets along the way, and the lessons she learns from these experiences. These days, you’ll find Miranda arriving to Enduro World Series race locations days early—not to prepare for the race, but to sponsor trail-maintenance days and to co-host youth skills clinics in places such as southern Scotland’s Tweed Valley. What’s more, she’s documenting these experiences in her new video series, “Here, There, Everywhere,” to share glimpses of life beyond the course tape. “I want to expand on what I do when I travel across the world to race,” Miranda says. “I want to have new experiences and combine my racing with story and content creation. And it’s made racing much more enjoyable as well.” Miranda’s video series has opened up entirely new endeavours, such as completing a 340-kilometer, non-stop gravel ride on remote provincial logging roads and documenting the efforts of First Nations people in Ucluelet, B.C. to preserve and maintain trails as a way of reconnecting with their ancestral land. For Miranda, creating meaningful stories might just be the most satisfying result of all.

Lyrics - Ryan Howard: Everyone has that song. That song that makes you pick up and go. Where you’re the hero and this is your anthem. When asked what would be his song, any song, R-Dog smiled and said, "Run Horse Run" by Charley Crockett.

Sam Dale Road Trips To The French Alps: Summertime in the big mountains: Load up the van, hit the highway, unload your bike, climb a mountain, hammer it back down, skid onto the patio bar, enjoy a cappuccino, camp out next to the river, get a good night's sleep under the stars, wake up, cook on the stove, throw the bike back in the van, drive to the bike park and do laps on laps. Hell, you could even rock up to the start line of the world's wildest races, the Megavalanche. That’s what Sam Dale did this July aboard his new Nomad. Sam Dale loaded up his trusty camper, crossed the English Channel and set out for the peaks of the Alps. He started with a visit to La Grave to sample the new Santa Cruz PayDirt funded trail, Les Valloins de la Meije trail. Starting at the top of the historic cable car and descending 5,000ft, it covers all manner of terrain - rocky moonscapes, rutted avalanche paths, romping singletrack and sinewy turns through pine forest nearer the bottom. As Sam says, it was a good way to get back in the groove of the fast, long and rugged trails typical of the French Alps. It was a perfect warm up for the Megavalanche race. The Megavalanche, possibly the wildest and rawest of mountain bike events. Again, starting at the top of Alp d’Huez - in the snow - and descending for 40 minutes at race pace across glacial rock slab, boulder fields, ski pistes, new school jump trails and well-worn paths. It puts any rider and their equipment to the test. Sam believes the best way to really take a big bite of the Alps is to do it while camping. This allows you to get closer to the spots, to breathe the air and get into the rhythm of the places you’re visiting. After watching this, you might agree. Sam’s approach on and off the bike is refreshingly down-to-earth and a template for anyone wanting to feel the energy of big mountains.

Remy Morton - Raw 100: Remy Morton heads to Virgin, Utah for the first time in a re-imagining of some of the most infamous hits through the mind, eyes, and style of the Aussie freerider.

On Point - Jesse Munden: For some, early mornings are difficult. It’s a struggle to start the daily routine and get about the day. At 16 years old, Jesse Munden is no different than most. Apart from his days consist of a combination of flatspins, 720s, sizeable dirt jumps, and coffee, black. By 7:00am, Jesse had already nailed the shot, and the feature was wrapped. He’ll say he’s no early bird, but he sure was on point. We can’t wait to watch Jesse progress throughout the years. Welcome to Commencal! Rider: Jesse Munden. Video: Cole Nelson.

When Wyn Masters Visits the Tour de France: Mountain bike phenom Wyn Masters takes a look on the other side by visiting the world's largest cycling race in the Tour de France. All staple WynTV shenanigans are brought over as Wyn joins a ride in the Shimano Neutral Service car, interviews riders and staff of world tour teams, and even takes on the parcours himself, wheelies included.

Underexposed EP 21 - Port Gamble, WA: Washington is not a state lacking in amazing places to ride your bike. It's full of renown, from Bellingham to Seattle and Leavenworth to Spokane, there are a number of high profile communities filled with high profile athletes throughout the Evergreen State. Port Gamble isn’t as easy to get to, and once you’re there you might be more blown away by the landscape that surrounds it than Port Gamble itself, but quite honestly, none of that matters. There’s a spirit to this place that sets it apart from its large-scale neighbours. Leave it to this quiet, unassuming hillside in the middle of the Puget Sound to serve as a reminder of just how far you can go with some imagination and teamwork.

Spin To Win - Jordan Godwin: You’ve got to spin to win! A global pandemic and a few visits to the ER weren’t enough to stop Jordan Godwin from delivering this amazing part. Despite the challenges, Jordan brought his mind-blowing peg wizardry and technical prowess to the streets of Spain, Portugal, and the United States. One thing’s for sure, no handrail or ledge setup is safe with this guy around.

Ethan Corriere - F-IT ALL: If you're cranky, watch this.

Mariah Duran's "Rapa Nui" Part: Mariah annihilates the streets and ditches of the Southwest, paying tribute to ABQ's iconic BZ shop. Take note: this is how you get invited on a Thrasher Vacation.

A Skate Tour of Helsinki with Eetu and Jaakko: Curious about skating in Finland? Eetu Toropainen and Jaakko Ojanen gave us an impromptu demo at spots all across the city that would shit on even the best Segway tour.

One / Eighty: Style is timeless.

Kelly Slater - The Perfect Wave: The next Championship Tour event is in the Lemoore, California at the Surf Ranch, a man-made wave Kelly designed. Competing at his own creation forces him to play host while also chasing a much-needed good result. Follow 11-time World Champion Kelly Slater as he navigates another transformative season of his legendary career.

How F1 Racers Turn Really Fast: Cars travel at their fastest speeds when moving in a straight line, and Formula 1 is no different. F1 racers drive at over 215 mph on the straightest parts of the track. But when it comes to turning around tight corners, these kinds of speeds just aren’t possible. In order to avoid spinning out and crashing, racers have to slow down and use physics to strategically craft the most efficient turns while retaining the greatest amount of speed, ideally giving them a leg up against the competition. The most efficient path through any corner (or set of corners) is generally referred to as the “ideal racing line.” This line changes depending on the path of the track before and after the curve, but the goal is always to spend as little time in the turn as possible. That means using the entire width of the track to minimize the angle that the car will take around the turn, ultimately allowing drivers to carry the most speed through it.

Wax & Gold: The film documents a trip to Ethiopia to learn more about its rich history, which serves as the underpinnings for a contemporary cultural tapestry that interweaves the very old and the very new. Wax & Gold is a visual poem evoking a nuanced narrative portrait of this incredible place. Putting form to tension between history and contemporary life, the film relies on strong, timeless imagery, layered sound design, and driving music to create an immersive experience.

Mr. Russell's House: A legendary player on the court and a powerful voice for justice off the court, Bill Russell was an immense figure in the history of the NBA. As a cornerstone of the Boston Celtics dynasty of the 1960s, Russell helped lead his team to an unmatched eight straight championships and finished with a record eleven rings during his 13 year career. A transcendent player, Russell was a five time league MVP who revolutionized the sport with his abilities as a defender and rebounder. Russell was a barrier breaker who also was a leading voice in the struggle for civil rights and social justice. 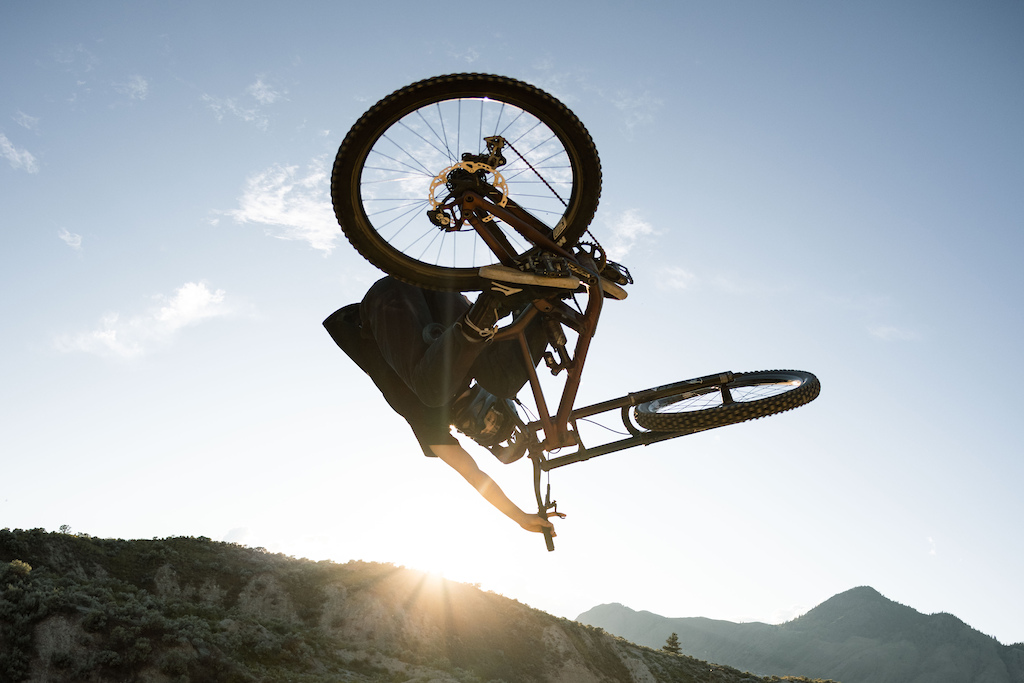 Share
Tweet
Must Read This Week
13 Bikes That Could See An Update In 2023
86144 views
Final Results from EWS Loudenvielle 2022
82542 views
First Ride: The 2023 Santa Cruz Tallboy Gets Updated, Not Overhauled
76043 views
Opinion: The Pace of Change in the MTB World is Slowing Down, and I'm All For It
57792 views
Review: 2023 Merida One-Sixty: An Easygoing Enduro Bike
41147 views
Evil Bikes Updates The Wreckoning With New Colors & a UDH
37999 views
Mathieu van der Poel Pleads Guilty to Assault After Altercation with Teenage Girls
36827 views
Review: The Digit Datum & Its Integrated 'Analog' Suspension
36320 views