Join Pinkbike  Login
15 Comments
Georgia Astle - Flip The Switch: If you don’t have role models to look up to, it’s harder to progress as a rider. Georgia Astle grew up chasing her older brother. “If he could do it, I could do it” she figured. But that could only take her so far. As Geo developed as a racer, she learned to push herself. She got comfortable “flipping the switch” and pushing against the clock. But when Geo looked beyond racing, there weren’t a lot of women pushing the limits of freeride. Until all of a sudden, there was. Watch Georgia Astle explore some of British Columbia’s most striking landscapes, on a search for terrain to push her riding, inspired by a rising tide of female freeriders around the world. Director: Scott Secco. Composer: Amine Bouzaher. Sound Design: Keith White. Colourist: Ryan Schroeder. Special Thanks: Sam Grainger, Jose Letelier, & Toby Creek Adventures.

Paul Couderc - My War III: Two parts just wasn't enough. Paul Couderc runs it back for a third time to show us epic tricks that come with failures that never seemed to stop him. Enjoy part three of Couderc's series 'My War.'

Emil Johansson - Menacing Tranquility: Director Jeremy Grant dug through the Esperanto archives to pick out the best shots from Emil Johansson's groundbreaking slopestyle segment in Teton Gravity Research's 2022 mountain bike film. Going through the archives months after a project can yield some new perspectives on a memorable shoot. When we filmed Esperanto over the last two years, we ended up with an insane amount of extra footage that deserved to see the light of day, but one segment in particular stood out: Emil Johansson putting 110 percent into the pursuit of perfection at La Fenasosa Bike Park. With so many amazing clips left on the cutting room floor, he and director Jeremy Grant teamed up to create an athlete cut with all the amazing clips stacked over the team's ten days in Spain.

Brage Vestavik & Blur Media - Behind The Sound Of Speed: Brage Vestavik and Blur Media teamed up to make the Red Bull Sound Of Speed last summer in Hafjell Bike Park! Join the boys behind the scenes of a heavy week of stacking clips. GoodTimes! This video was awarded Pinkbike's Video Of The Year and Readers' Choice award for 2022! Full video here.

The Eighth - V10 Development: Ep1: This is the eighth generation of V10, one of the winningest downhill bikes of all time. What you see here is still very much in the prototype stages. This video series goes behind the scenes and shows the work that the team at Santa Cruz and the Syndicate put into this and other bikes. Episode one takes us back to just a few weeks after Greg Minnaar won the 2021 World Championship and went to work validating numerous test mules to decide the direction of the next bike. You might be surprised to hear that other suspension designs were tested before Greg settled on VPP™. The Syndicate will be racing this bike in 2023 and they will continue to develop it throughout the year. Future episodes will dive further into the process of making a world class downhill race bike. When will it go on sale? No time soon. This is development in plain sight.

Discovering Ryan McNulty: Freeride up-and-comer Ryan McNulty lives to ride, detailing cars to earn the cash so he can head to the likes of Proving Grounds and Freeride Fiesta, all to chase his dream of one day competing in Rampage. Those around him can see that it will only be a matter of time until his name is on that start list. We caught up with Ryan to document his raw passion for the sport and followed him through his home trails in Oregon, and all the way down to his second home of the Utah desert as he etched in some lines in the dust to go big. “The moment I realized Ryan McNulty has that full package, the ‘X Factor,’ the staying power to make it somewhere in this sport was when he showed up to Proving Grounds [2021] on a borrowed bike,” says freeride icon Cam McCaul, “And no guarantee that he was going to be allowed into the competition.” Last year, McNulty was an alternate rider for Rampage—while unable to dig his own line in 2022, he eagerly joined the dig team for current competitor Ethan Nell. “[The digging and camaraderie] is just as good as riding your bike,” says McNulty, “That’s why we all gather anyways—so just being part of any of those events where it’s all about having fun [is what] I’m all about.” “I think a pro mountain biker is just someone who puts all their effort into their passion,” says Ryan McNulty, “And wants to be fully-involved in that scene.”

Niklas Tilk - Love The Earth: Radio Bikes team rider Niklas Tilk has been paving the way for MTB street riding for some time now, and with every video he drops, the bar gets raised again and again. His latest video is a testament to just how far Nikals pushes himself on a bike and gets out of his comfort zone.

Luis Gerstner - Viva La Send: What a year! Thanks everyone for all the sick runs, nice chats, and massive good times. Riding bikes is great.

Kerosene - Kink BMX: Kink Pro Casey Starling and Kink AM Harrison Arcari are an unstoppable duo hailing from the East Coast and bleeding New Jersey street riding. We are excited and proud to bring this split-part to life from trips to Atlanta, Georgia and Los Angeles, California.

Appalachian Adventures With Team Mongoose: Team Mongoose took an adventure through the Appalachian region to explore some of the DIY skateparks and beautiful scenery the area has to offer. Hit play as Kevin Peraza, Nikita Ducarroz, Pat Casey, Ben Wallace, Mykel Larrin, and Josh Hult cruise some community-driven concrete. "The Appalachian region is well known for being all things outdoors, from hiking and camping to mountain bike riding. But what you may not have expected are the incredible concrete gems hidden away in the mountains. The Mongoose team got a chance to check out what these parks had to offer and got some good riding in.

Escape - Empire 2023 Team Mix: Been together too long? Fallen into the same old dull routine? Write to the paper and take out a personal ad! Tell ‘em: “Hey, I’m looking for love, I feel like planning an escape with Aaron Ross, Brett Silva, Tom Dugan, Chase Hawk, and Jared Duncan”. Devon Hutchins just might see it, and he’ll cut through the red tape!

David Fincher - And The Other Way Is Wrong: For sheer directorial craft, there are few people working today who can match David Fincher. And yet he describes his own process as “not what I do, but what I don’t do.” Join me today in answering the question: What does David Fincher not do?

Sunbirds: The Sunbird, a unique type of person you've probably never heard of, lives in feverish anticipation of the long nights and crystal-clear days of winter. Descending the rocky capes of the Chic-Chocs and sculpting the immaculate snow of the Gaspé coast, this cinematic ode to winter is a reflection on the importance of protecting nature and re-evaluating our presence within it.

Snow Blind: Tyson Rettie was living his dream of being a ski guide but that was taken away when he lost his vision. Tyson manages to not only return to backcountry skiing, but to find a way to bring other blind and visually impaired skiers along with him. Tyson started Braille Mountain Initiative to inspire the blind and visually impaired to experience the backcountry. Thanks to Anthony Bonello, Bruno Long, and the team at Switchback Entertainment for capturing Tyson's story and the memories from this first guided trip into the backcountry.

My Duduś: During the summer of 2020, I returned home to Chicago during a break from my studies at the Lodz Film School in Poland. When I got there, my mother quietly walked me into a room where she gently pulled a strange, hairless creature out of a shoe box. It looked as if it had plummeted to earth from another planet. “He’s sleeping,” she whispered as she opened the box. A tiny head peeked out from the mountain of towels, blankets and a homemade heating pad made out of a used white sock and rice. “What is that?” I asked. I squinted my eyes as I gently moved the blanket to expose the animal’s torso. “Is that a squirrel?” I looked over at her, and even though it was dark, her beaming smile lit up the room. “Yes,” she nodded. My mother had found the baby squirrel abandoned in her yard. She contacted animal shelters nearby, but they were struggling to take in more animals during the Covid pandemic, so my mother began caring for him herself. My intuition told me to pick up a camera. I knew something special was happening. My mother, a Polish immigrant who had raised me by herself, had been dealing with her newly empty nest after I left for school, and I knew the joy that raising the squirrel would bring her. After returning to Poland, I saw my mother raise him as she raised me — with meticulous love and care. But he was a wild animal, and eventually my mother had to do what all mothers do: let her child go out into the world. In the short documentary above, I document their journey together. 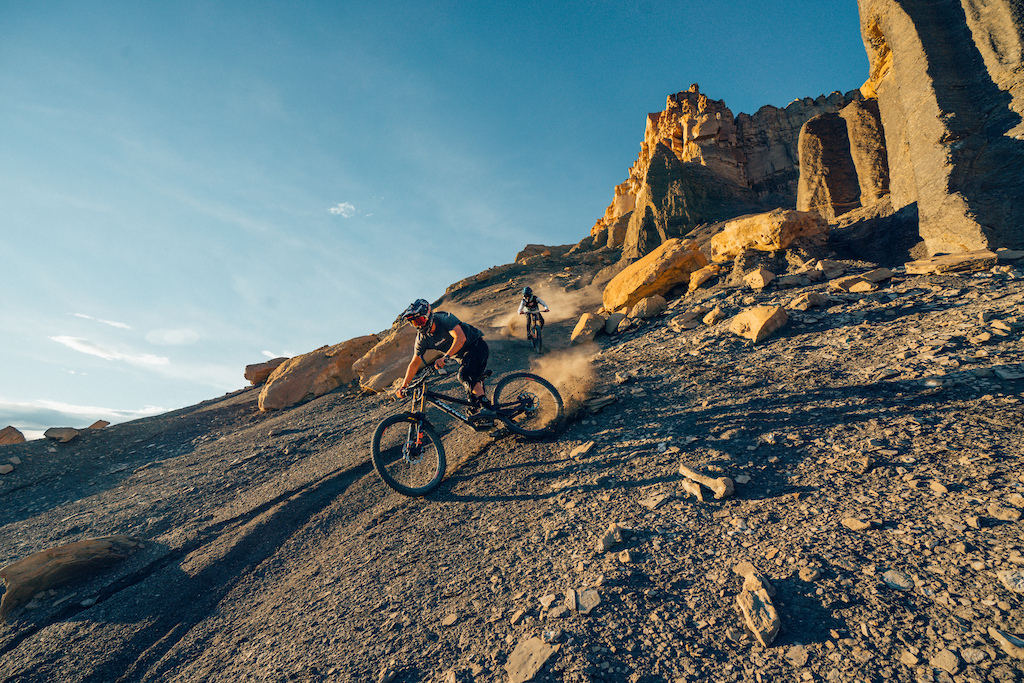 jessemeyers (Jan 23, 2023 at 17:22)
A lot of rollerbladers have tried it. This video has some of the attempts (skip to 40s in if you want to skip the rail tricks).
youtu.be/xmYiZOlz4ZU

JonDud (Jan 23, 2023 at 3:29)
A Japanese mountain biker? Cool. If you want to have your mind blown, search on YouTube "The future of Japanese flatland, today: Takato Moriya & Yuta Watanabe"

mtbutters (Jan 23, 2023 at 11:58)
I remember hearing someone died on The Leap Of Faith when I was a little wood pusher. Must have been a myth about Mr. Mutton Chops here.