The 04 - Phil Ricard: Put together a 2004 Devinci Wilson in the spring and had a lot of fun on this thing! Thanks to Will Binamé for the high quality shots!

Beyond The Reach: How Christian Bagg developed an adaptive bicycle for paraplegics and found that his life would radically change as well as theirs.

Corbin Selfe - Against The Grain: The town of Sicamous certainly isn’t known for its mountain biking. Growing up here, Corbin was faced with the simple fact that if he didn’t build trails, there’d be nothing to ride. After many years of digging, he finally has some home town trails. Overcoming various challenges, he can now enjoy the fruits of his labour.

Corbin Selfe | Against The Grain

The State Of Flow: The State Of Flow is a project by Video Band and Pierre-Luc Arseneau to showcase the riding potential on the East Coast of Canada. This project couldn't have been possible without the help of @konaworld, VELO Ski Bike Trail, VideoBand, Paul Dupuis on the animations, Jean-Luc Saulnier on the follow cam, and the countless hours of trail building put in by the local community.

The State Of Flow

To The Fall Rhythm: Filmed in Les Vosges, France,

To the Fall Rythm

13 Year Old Erice Showing Off Her Tricks & Style: Road trip to Rotorua and some new tricks were learnt!

13 year old Erice showing off her tricks and style

Glenn King - Elation: Glenn poured everything he had into his latest video project, Elation. Filmed in Prince George and Farwell Canyon over the course of two weeks, Glenn was able to finish ticking off his dream features just before the snow came.

Between The Races: We followed Connor Fearon, Danny Hart, Mark Wallace, Troy Brosnan, Luca Shaw, Theo Erlangsen, Brendan Fairclough, Loris Vergier, and Amaury Pierron to their hometowns to find out what goes on outside of the race tape. From Australia to North America and Europe, we travelled the globe to get behind-the-scenes, unfiltered access to the greatest in the game. Released as a series in 2019 and now with unseen footage and narration by World Cup legend Steve Peat, the full feature film Between The Races explores how varied each of the athlete’s lifestyle is away from the track. We step outside of the pits and into the living rooms, home tracks and private lives of the professional racers to understand what it takes to make it on the World Cup. In a sport where time is everything, we slow it down to understand what makes these racers tick. Find out what happens Between The Races…

Riding This Trail Fast Could Mean $10,000: Behind the scenes for Dangerous Dave's GoPro Best Line video.

Vans - The Circle: Battling the cold weather, the UK's Source BMX and their crew of Jordan O'Kane, Stu Chisholm, Max Hedges, Daniel Bungay, and Tom Wilson put out a blinder for Vans! Get stuck in immediately.

The Substance Video: Next level stuff from the Substance BMX family. Joe Jarvis, Ben Gordon, Dan Banks, Thomas Roulston, Si Gibb, Guy Scroggie, Ross Taylor, and Kyle Neave dropped a 22 minute stunner with this one, and all expertly put together by Jack Millington. Put your feet up, crack a Soop and enjoy - this is absolute banger.

Burnside 4 Life - 30 Years Under The Bridge Video: Three decades of destruction smashed into six minutes. Big ups to everyone who’s chipped in or got broke off under the bridge. Fuel the stoke and build your own.

The Scariest Injuries Of Sean Malto's Career: Gather 'round the campfire, kids, as Sean Malto shares the horrific stories behind five of his worst slams.

Jagger Eaton's Pro Part: 19-year-old Jagger Eaton has been everything from contest champion to Nickelodeon star and, as a Team USA athlete, an Olympic hopeful. We're stoked to premiere Eaton's pro part for The Heart Supply - this guy is the future.

Atmosphere With Jake Blauvelt: A look into world-renowned professional snowboarder Jake Blauvelt's life, career, and the past winter season. Snowboarding in British Columbia, at Mount Baker, and hosting a grassroots snowboard event at a small mom and pop resort that he learned to ride at in rural Vermont.

Yeti Presents - Ingrained: You’ve probably never heard of Ten Sleep, Wyoming - it has a booming population of 260, after all. As a world-renowned pro snowboarder, it would appear that Mark Carter has defied his small town destiny. But those who have spent any time on the Carter ranch know that his unique upbringing is at the root of his success. Hard work was ingrained in him from birth, and it’s what drives him in his relentless pursuit of becoming one of the best snowboarders in the game. 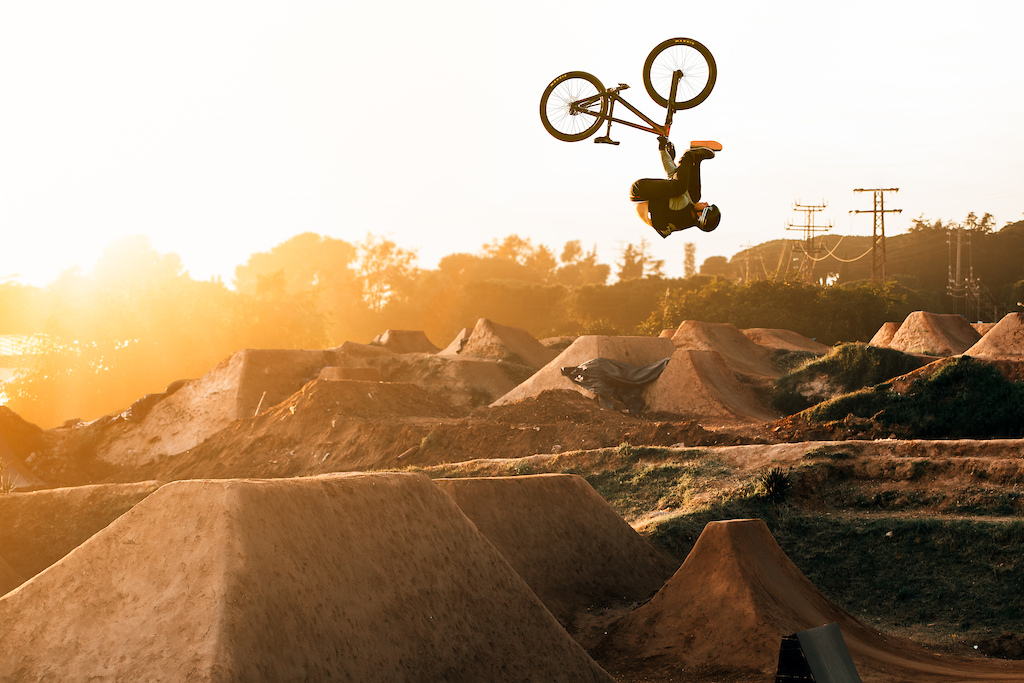 mtbracken (Nov 9, 2020 at 11:19)
Modern BMX street is so damn brutal. I'm glad it hadn't progressed this far when I was into it. I can't imagine the chronic pain some of these riders will experience when they get older. That said, the riding is draw-dropping rad.

plyawn (Nov 9, 2020 at 11:39)
Anyone else see the headline " Behind the scenes for Dangerous Dave's GoPro Best Line video." and initially read that as Dangerous Dan (Cowan)?

Great riding regardless (by both of them)!

rosemarywheel (Nov 9, 2020 at 17:26)
I gotta say... skateboarders get my respect for doing awesome things while not having anything to hold on to. It looks really fun but soooooo dangerous.

GripNRipTools (Nov 9, 2020 at 11:19)
@bbmj: @unrooted Thanks for checking it out. Yes, it's sweet. Yes, it's a little expensive. Yes, we don't want to make crap that breaks so that results in lots of custom carbon fiber and machined aluminum parts. Its bomber fits in your pack and moves dirt. Each part is also replaceable. We are a really small company that can't afford to produce hundreds of thousands of these in order to get the price down to nothing. $760 is also for 9 tool heads. Add up 9 quality standard tools and you won't be that far off in price nor will you be able to ride your bike with them.

loam33 (Nov 9, 2020 at 18:05)
@GripNRipTools: @GripNRipTools: I love this tool. this looks like a great product that you have put a lot of thought into for sure and i want it! the only thing is that i think the comical slant in your marketing video was a little too overdone and slightly off for my taste; is that just me? (not hating just constructive criticism) anyway cheers, wishing you much success and hoping you sell a bunch!

GripNRipTools (Nov 10, 2020 at 11:17)
@loam33: Thanks for the feedback we appreciate it. We definitely went left field with this commercial in hopes to provide a bit of entertainment for people. It's also our Kickstarter video and after watching how boring all the videos on Kickstarter are we spiced it up a bit. We also are videographers so it's easy for us to overdo things. Have you checked out the shorter one minute edit?