Big Coen, Little Cohen: Me and Cohen Johns taking a rip in the Whistler Bike Park! Huge thanks to Zane Simmons and Craig Johns for making this happen. The future is bright for the sport.

The Cornish Fasty - Jay Williamson: I caught up with elite racer and MTB coach Jay Williamson to see what he's been up to this summer without the normal year of racing!

Under the thunder - Charles Bousquet


Elliot Smith: A quick visit to QLD and a race against the clock to film this little edit with the man, the myth, the legend, Elliot Smith.

Matt Macduff - Augment Legend: Macduff sending it on the Shore.

Cycles - A Journey Through Life And Death: Lorena Dromundo and Micayla Gatto, pro mountain bike riders, started a deep and very personal journey down in Mexico, where life and death had become their greatest teachers. The riding became a journey of introspection; their greatest will and desire became to connect with what they love to do, life and the remaining time that each had been given. They found a time to honour their loved ones and transform this painful, but natural process of death into an inspiring lesson to make the best of our lives while we are existing in this world.

Sight Unseen - Durango With Brice Shirbach: On the heels of his stop in Boulder, Brice Shirbach makes his way to Durango, Colorado to capture the next "first run" edit of the 2020 Sight Unseen series. Sight Unseen celebrates the thrill of riding blind, reminding us all to seek the fullness of new trail experiences.

"You'll Never Ride Again" - Scotty Cranmer's Comeback Story: Today is the four year anniversary of the accident that changed my life forever. Over the years I have made unbelievable progress going from being fully paralyzed to now being back on my BMX bike riding again!

Our Planet - High Seas: Experience our planet's natural beauty and examine how climate change impacts all living creatures in this ambitious documentary of spectacular scope. In this episode, venture into the deep, dark and desolate oceans that are home to an abundance of beautiful - and downright strange - creatures.

Purple Mountains - Full Film: Our outdoor playgrounds are in peril and our votes this November will decide their future. Professional snowboarder Jeremy Jones has watched winters change drastically during his 45 years spent in the mountains. More extreme weather, fewer snow days, and economic strain on mountain towns. And yet, climate change remains a divisive issue. In the new film Purple Mountains, Jeremy seeks common ground in the heart of America's purple states, having honest discussions with individuals who don't see eye to eye with him.

Action Men: Action Men is a 12 minute skiing/claymation short, brought to you by the Legs Of Steel. Featuring former Freeride World Tour Champion Markus Eder and British backcountry ace Paddy Graham the latest creation by the legendary LOS crew delivers spot on freeride action by one of the tightest crews in skiing. Press play and get hyped for winter!

Vertical Ice - The Spirit of Guy Lacelle: Vertical Ice is a journey of discovery and exploration, both of the man himself and the raw beauty of his most inspired winter climbs. Told from the perspective of some of the best ice climbers in the world today, paired with archival footage from the infancy of the sport, this documentary honours the spirit of Guy Lacelle. 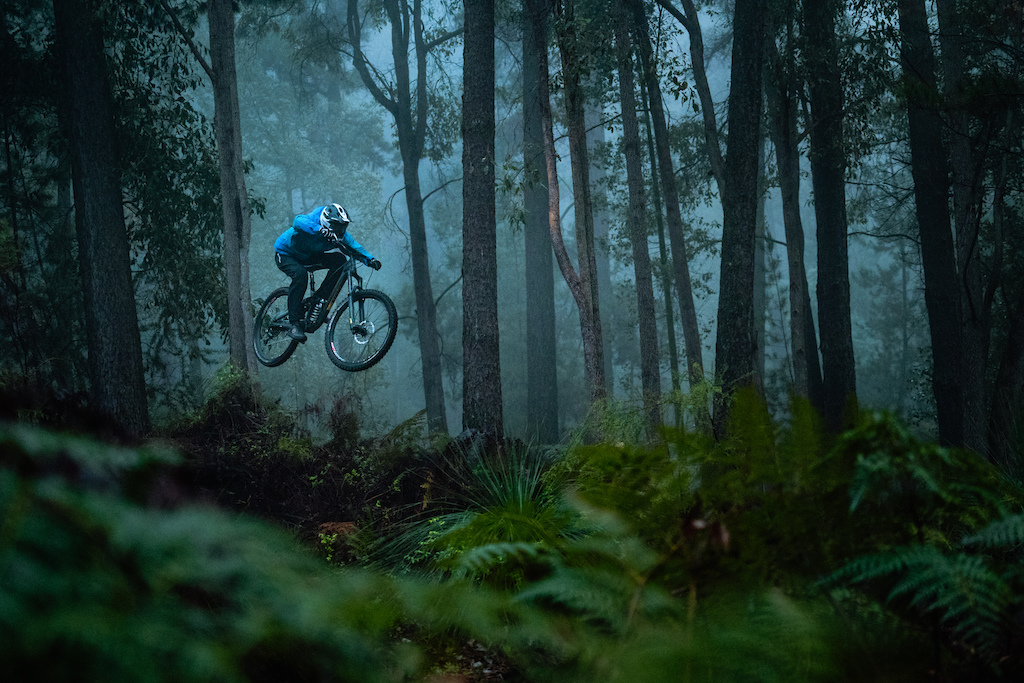 A steep angled hardtail with short front suspension? Think those used to be called XC bikes...
Also, that seat mounted rollup bag looked annoying as hell with how much it shifted side to side when he was riding.

overconfident (Oct 21, 2020 at 7:50)
@hisroyalgooseness: totally depends on the trails I think

For long fairly smooth forest roads, an XC bike won't be as fast or as fun as a gravel bike with light 40mm slicks. For the sort of riding I do, with fairly lengthy road sections linking easy XC trails, a gravel bike makes sense, although a rigid 29er would do the job too

I say gravel bike, monstercross is more appropriate for what I ride...
www.pinkbike.com/photo/19423703

KavuRider (Oct 21, 2020 at 10:13)
@overconfident: That totally makes sense and I'm not bagging on the idea of riding a road bike with fatter tires on dirt roads. I have been doing just that for years, I am just picking on the fact that it has become an entirely "new" market segment. And that they are now fitting them with suspension forks, droppers and mountain bike drivetrains. That is pushing it from gravel bike to XC rig.

Slabrung (Oct 19, 2020 at 14:00)
Wow Scott's Norco movie is just next level, it's just how I feel when riding (well maybe not _that_ trippy and minus big drops!). I could watch on repeat. Congrats @scottsecco (incidentally, next bike I'm planning to buy is a Norco)

nickmalysh (Oct 22, 2020 at 16:31)
Did Scotty Cranmer crashed without helmet?
Below threshold threads are hidden

fullendurbro (Oct 19, 2020 at 8:39)
That Pivot series is literally just an average rider going around blowing up local spots. So many locals when he sponsored that one, unnamed Front Range spot.

LeoTProductions (Oct 19, 2020 at 10:15)
Lmao you think lefthand is unknown? It's more popular than Betasso these days you kook.

fullendurbro (Oct 19, 2020 at 11:01)
@LeoTProductions: It used to be unknown. Then all the gumbies started showing up and using strava/making YouTube videos about it.

LeoTProductions (Oct 19, 2020 at 11:40)
@fullendurbro: Fair enough, that ship certainly sailed before his video.

slayerdegnar (Oct 22, 2020 at 9:29)
@fullendurbro: Ha, blame me. I put coal ck on trailforks years ago. Back then the section off the ridge had no real trail into the woods. I posted it to get more people to ride it in. But now its every enduro bros fav loop. Luckily some locals have been keeping it maintained and freeride friendly. Durango is just too popular these days.

ashlemon (Oct 19, 2020 at 8:11) (Below Threshold)
Climate change is real, black lives matter, and everyone should wear a mask bro! You are just not considering how your lifestyle impacts the planet enough bro! We'll being dealing with climate change for decades, bro! If you don't like it move along, bro! Cheers!

steelpoo (Oct 19, 2020 at 10:10)
@ashlemon: Why would u want me to move along? Wouldn't you want the oppurtunity to change my mind so I could be a proponent to the causes you care about? Or would you prefer that all people who you disagree with would forever be without the possibility of being enlightened by your apparently superior knowledge? Just stating what is the case without reason is largely ineffectual in changing the minds of reasonable people. Good day to you sir!

steelpoo (Oct 19, 2020 at 1:00)
Was hoping to watch something about climate change, mental health, or social justice. Come on pinkbike, get it together.

scottsecco Mod Plus (Oct 19, 2020 at 2:14)
Hi @steelpoo, I've noticed you've commented several times about how upset you are with the videos here in Movies For Your Monday. Unfortunately, climate change is a fact we'll be dealing with for decades to come. It's important for us all to consider the impact our lifestyles have on the planet, and I think framing climate change in relation to extreme sports makes it more visceral for readers here on Pinkbike. If you have a problem with my picks, then I'd recommend clicking elsewhere. Climate change is real, Black Lives Matter, and everyone should wear a mask. Cheers!

steelpoo (Oct 19, 2020 at 10:04) (Below Threshold)
@scottsecco: lol I'm humored, and definitely not upset. There's probably not to many people that those selections produce a more visceral reading experience in. Being bombarded, with these positions, as so many of us are, is detrimental to the cause you advocate. It's not an effective way of changing minds, it is little more than a preach to the quire.

For what it's worth, the most pressing issue we face is the moral degradation of mankind and it is that which is most in need of attention. The devaluing of differing opinions is a large part of that degradation. Be wary of suppresion, its not good for the soul.

More bike riding and less pinkbiking. That’s not really up for debate....

mi-bike (Oct 20, 2020 at 9:23)
@steelpoo: "most pressing issue we face is the moral degradation of mankind" says the person who chose excrement for their username. #fail