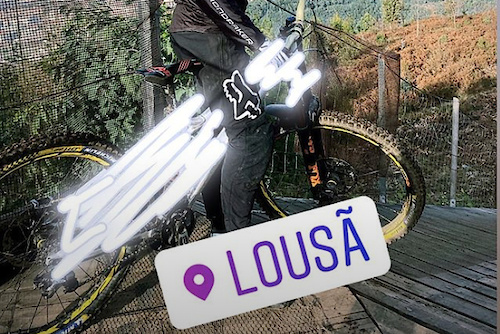 Laurie Greenland and the MS Mondraker team are out in Portugal doing some pre-season testing in Lousa and we think they have a new aluminium downhill bike with them too. Laurie posted the above picture on his Instagram stories and if you look between the concealing lines, you can see a definite weld on the top tube and plenty of raw, silver tubes, a far cry from the usual Mondraker blue and red.

We've also found this video, which we believe is a clip of the bike in action:

While the current Mondraker Summum is still a race-winning bike, thanks to Laurie Greenland at Val di Sole this year, it's one of the very last bikes on the World Cup circuit that is designed to be run with 27.5" front and rear. The team have been running a mullet set up from Crankworx Innsbruck onwards this season but they were simply putting a bigger front wheel in his regular frame rather than using a platform specifically designed for a bigger wheel.

Of course, we've already seen an aluminium prototype Summum at the Lenzerheide World Cup, where it was happily wheeled past media and spectators, but the renewed secrecy has us wondering if there are some further updates on this version. 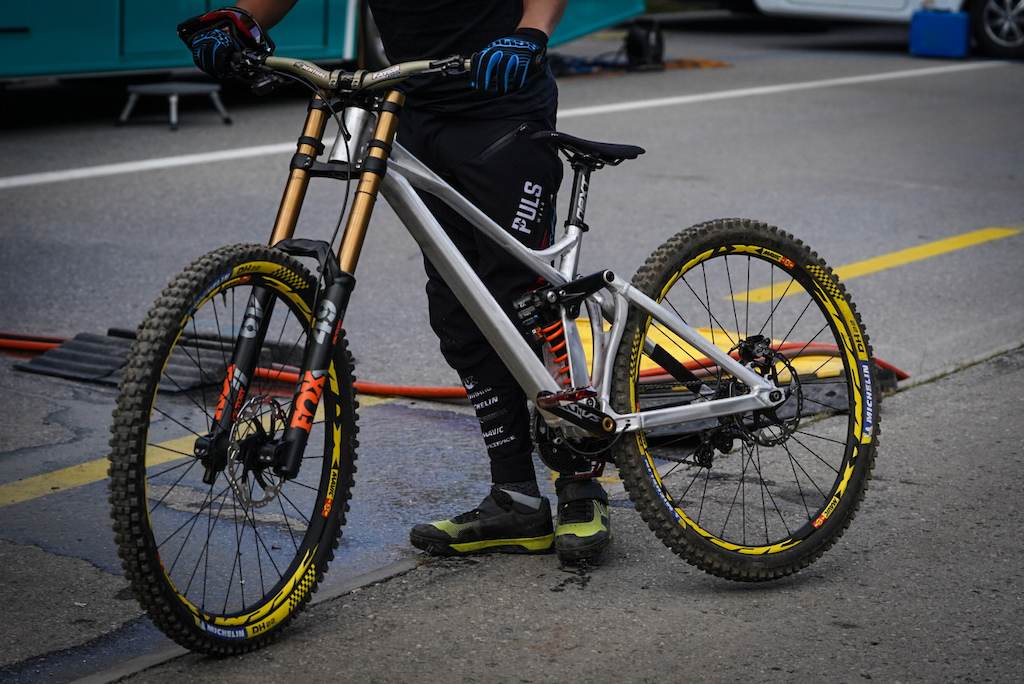 From the picture we took back then, we noticed that the wheels were both 29 inch, and there was a new upper suspension link that had no window (the current link is an open triangle). Mondraker also confirmed that there were some geometry updates but nothing too drastic as their riders were happy with the current set up.

We're now just 3 months out from the first World Cup in Lousa, will this aluminium frame be the one we see MS Mondraker riders as the season kicks off? We reached out to Mondraker and their statement is below:

WAKIdesigns (Dec 13, 2019 at 5:38)
Why would anybody ever want a carbon version of this beauty? Raw alu more real than steel

In other news, have you blown your wad over the new Carbonjack 29, @WAKIdesigns ?

WAKIdesigns (Dec 13, 2019 at 6:22)
@MTBrent: in other news Carbon Jack 29 is possibly the best Enduro 29er out there. I am unworthy and I ride so bad that I need more travel though. No actually I am an arrogant edgy bastard so to stay edgy I am going into DownDuro segment and I am getting a 190 climbable quasi DH bike in raw alu. I will make freeride great again!

formerbmxguy (Dec 13, 2019 at 7:16)
I could do without the kashima fork and orange coil, throw a performance elite and a black spring on there and you've got a RIG

ceecee (Dec 13, 2019 at 12:15)
@getsomesy: Urban Freeride Optimized! Travel: 0-240mm. Less polluting than mountain biking, especially when conjoined with cyclocommuting, and not consumed as entertainment. Eliminates Road and Mountain, but can be used beyond category in mountains. The bigger the city the better. 'I wasn't getting much of a workout on the Madone, and was tired of walking down the stairs of my 6th floor apartment, so I picked up an M16 on Craigslist....' Could also help with natality/mortality imbalance and not far from yr quiver bike.

*Frame finish-wise that is.

WAKIdesigns (Dec 15, 2019 at 23:47)
@matzx: heh carbon Mondrakers are not exactly in “the most reliable of all times hall of fame”. There was “a prototype batch” of Summums that Danny and Laurie rode at VDS World champs that were cracking left and right.

vinay (Dec 13, 2019 at 6:08)
I honestly doubt this. After all this is all very secret and not even Laurie was allowed to look at the bike while riding, cleaning and even wrenching. Being allowed to view this on this mainstream mtb website is only reserved to those who've mastered the fine art of clicking the bait.

Tomorrow: "Now that was a bike".

TheBearDen (Dec 13, 2019 at 7:37)
If you would like to see what it looks like. See below.
My guess is they may race an allow bike this year. This is no prototype, this looks like a damn near production bike.

jaame (Dec 13, 2019 at 11:29)
Wow it’s lucky they scribbled all over it to stop us seeing it, because it doesn’t look exactly like every other summum in the world. Radical design changes, definitely need to keep them hidden from the competition.

R-M-R (Dec 14, 2019 at 9:41)
@TheBearDen: I'm not sure that's what I see, but I'm hopeful for another high-instant-centre-and-idler design. Not convinced they're necessary - or even better - but it's great when the industry tries new(ish) things!

mtnrush666 (Dec 13, 2019 at 7:20)
"We are testing very expensive prototype bikes in Lousa this weekend. Our bikes will be in a bike white trailer with MS Moonraker stickers at Motel Seis overnight".

chocolate-thunder (Dec 14, 2019 at 7:03)
Can’t corner hard enough without rolling those balloons. Run high enough pressure + stiffer sidewall + bigger corner knobs (So that one could corner harder) = moto tire (too heavy). In racing, so much time is in the corners, less so in the comfort of a plus tire smoothing out some chunder.

aljoburr (Dec 15, 2019 at 5:59)
@erikkellison: Problem is more to do with tyres avalable, but I have some good Maxxis in 26"+ & work great, but pretty sure they are not made any more, But they will still have the moulds so could be avalable again
As for moto x tyres do not fit bike rims or would have tried them on my E-bike!

chocolate-thunder (Dec 15, 2019 at 10:03)
@aljoburr: with all due respect, no. It’s not tire availability. If your idea worked, racing teams who do the R&D for tire mfgs would be looking into this. But we did big 26” tires a while back. Fun, not fast. And no offense, but just because you think they work great does not mean they work for the elite, or even the majority.

aljoburr (Dec 16, 2019 at 2:50)
@erikkellison: Only would use 26" on the rear now, much prefer 27.5 up front, as bigger wheels track better up front most sponsored riders are told what tyres or other parts sponsors want them to use, have you even tried this out?
If you cant tell the difference then you would know that 26" accelerate faster, but could tell you more, but if you had tried then you would know that!
Could tell you advantages of shorter cranks too or why you dont need a dinner plate size sprocket?

chocolate-thunder (Dec 17, 2019 at 20:57)
@aljoburr: There are so many variables. With current manufacturing and materials, plus tires on the back (of any diameter) for advanced/elite riders just doesn’t work for racing/pushing corners.
You need to realize it’s not about you or me, and our opinions based on our personal experiences. I’m glad you like your setup. That’s fine - great even! Having fun is what it’s about for most. But don’t deluded yourself or others into thinking that you have the solution for cornering speed with a different rear setup, and this is all just a conspiracy against your ideas. Its not a conspiracy. Plus tires are currently a terrible idea for racing. But for gentle cornering in dry conditions with little that can hurt a tire, go for it.

chyu (Dec 13, 2019 at 7:43)
Mondraker is the first to use technology to hide their prototype frame? Not using some human legs nor random blocky stickers.

phutphutend (Dec 14, 2019 at 5:16)
Notice how Brett Wheeler on his Starling Murmur is keeping up with Laurie on his proto DH bike! Steel for the win!

Wheelersmtbholidays (Dec 15, 2019 at 12:44)
I will admit I was staying close but holy moly going that fast on an Enduro bike is frightening. After this run I went back to my downhill bike. But thank you pinkbike for sharing my video

Wheelersmtbholidays (Dec 15, 2019 at 12:49)
Laurie was bloody flying on this new bike. Thank you pinkbike for sharing the run we did together. It was fun