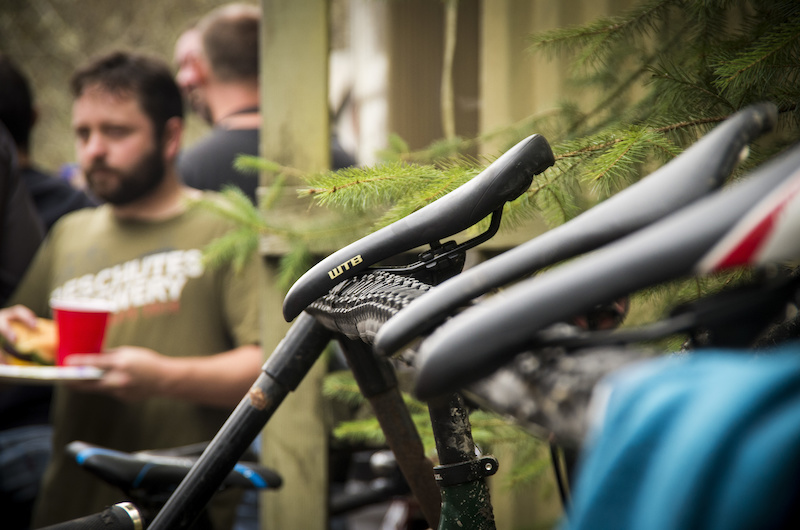 Bikes are strewn across a wide section of dirt road, laying on their sides, as they anticipate the moment their rider is cued to run from the start line and pick them up. Suddenly a loud “go” from a megaphone sends a rush of riders to scramble to their bikes, hop on, and pedal toward the woods. The race has begun. In the next 30 or 50 minutes, riders will weave through redwoods, tear down gravel roads, swoop through a muddy creek, and even drop through an old barn all as they continue through the looped course. 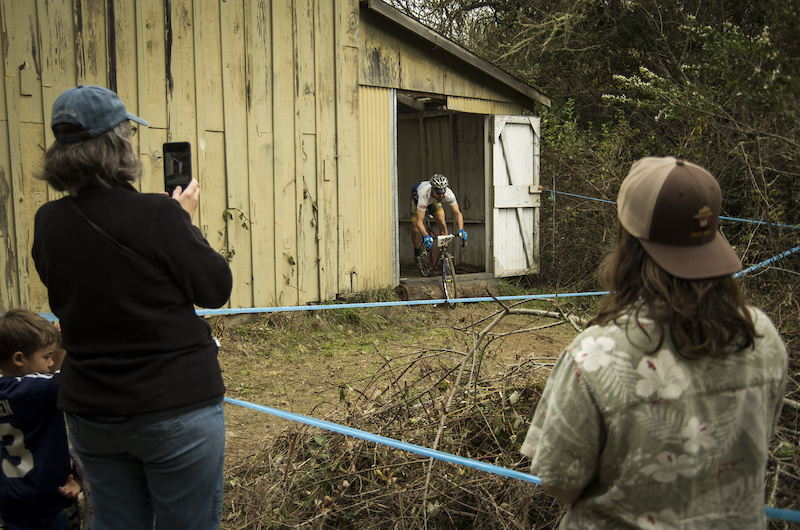 The Bogstomp is a unique Humboldt County cycling event that marks the beginning of winter up here on the North Coast. In its eighth year running it continues to grow and bring the Humboldt bike community together. Local bike shop, Revolution Bicycles, started the event originally because there was a lack of winter races in the area. It was also a unique opportunity to give back to the cycling community they cherish so much.


“We wanted to create an event that gave people a reason to come together” says Sean Tetrault, co-owner of Revolution Bicycles. He and his business partner, Justin Brown, have been organizing the race every year and look forward to progressing it more. 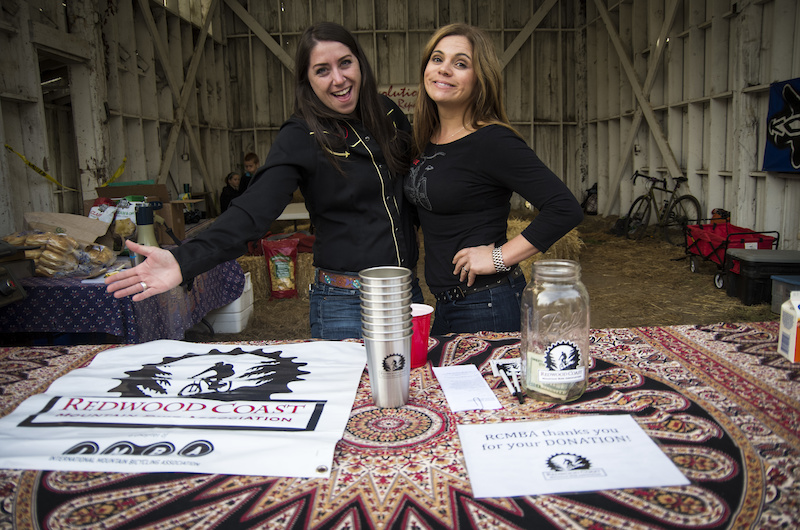 This year was special as Revolution joined forces with Humboldt’s IMBA chapter, the Redwood Coast Mountain Bike Association (RCMBA). With their help, this year's event was a “smashing success” says Brown. With improved timing, an awesome turnout, good food and plenty of beer, participants, and spectators were offered a great venue to come together and celebrate their love of two wheels in a good ol’ Humboldt rowdy sort of way. 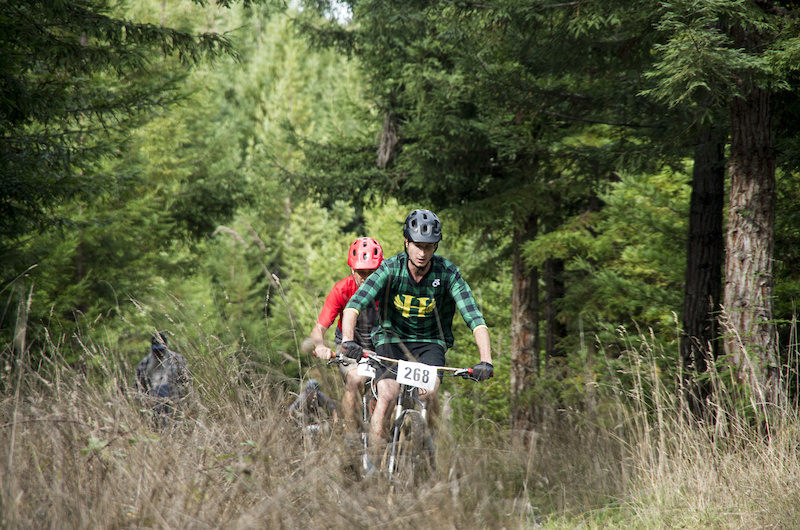 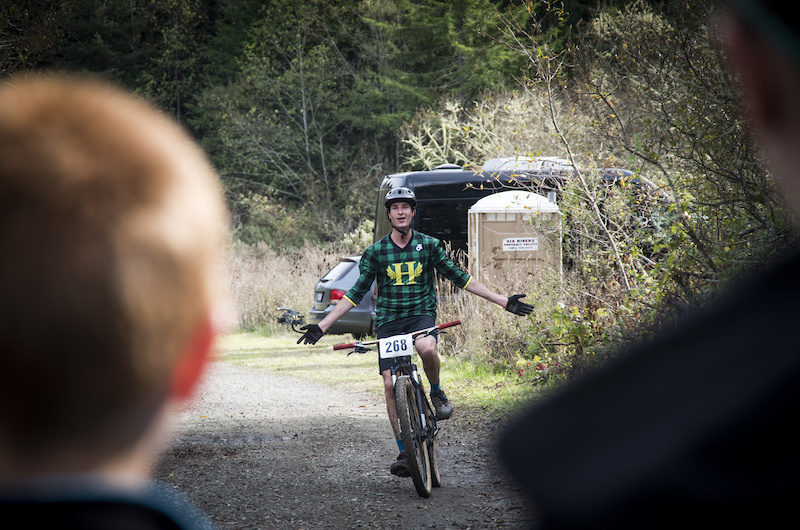 The 30-minute race starts off the day. With a shorter span of suffering it lends itself to a fiercely competitive half an hour. The men's field was stacked with local talent all hungry for the top step. Derek Roelle, president of the Humboldt State Cycling club, showed up ready to throw down for the win. With a can of beer in his bottle cage and a knack for getting wild in the tight corners of the woods section, Roelle crossed the finish line first. He was quickly surrounded by HSU teammates celebrating their victor as they held up their beers to an entertaining race. 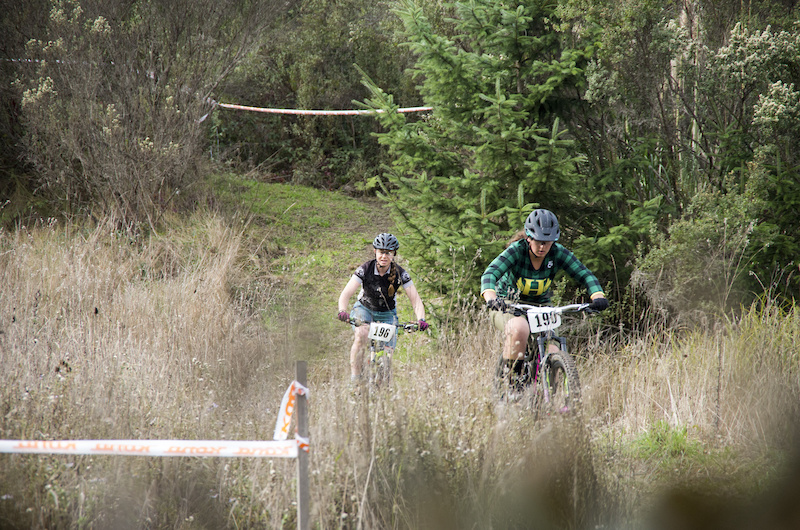 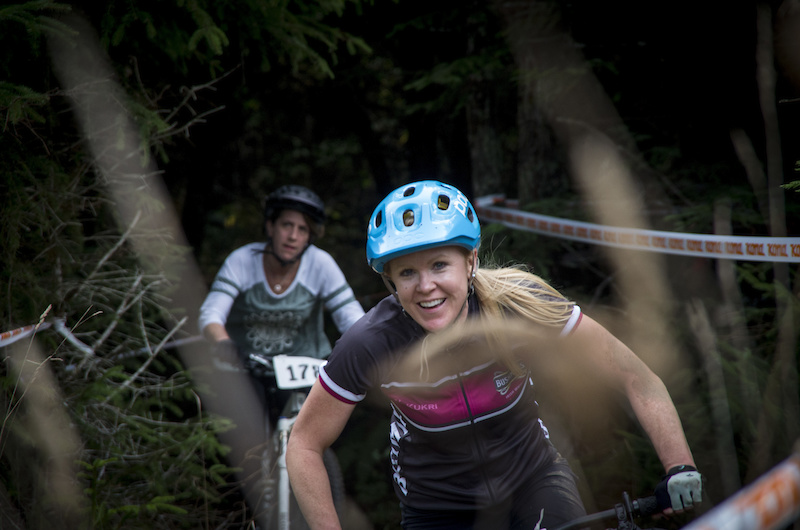 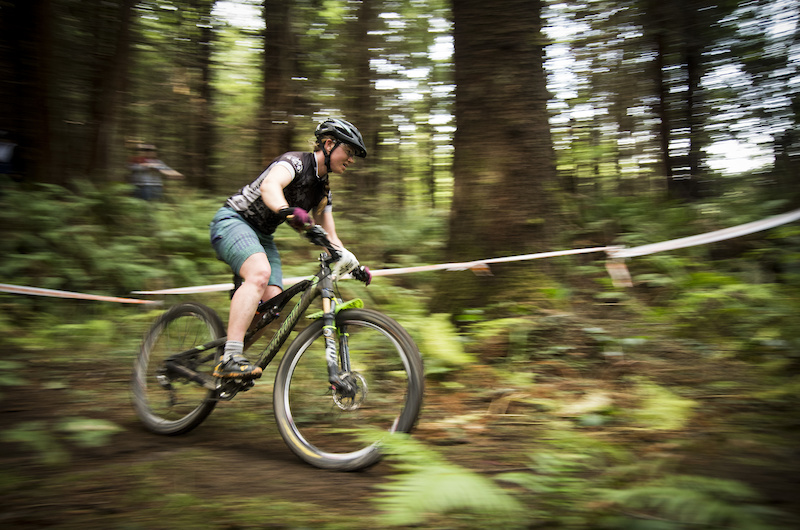 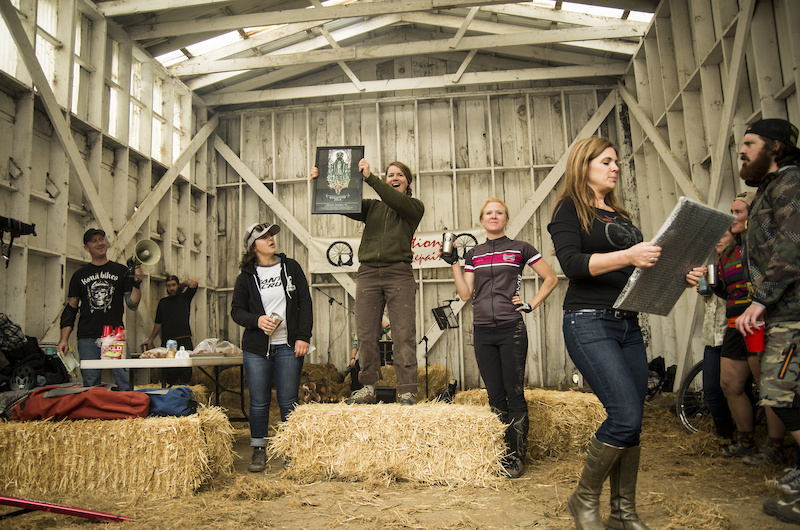 Alyssum Cohen, an HSU alumni traveling all the way from Utah to participate in the Bogstomp, was able to hold off the other women during the 30-minute race. She was followed by Lacey Comer from Eureka, CA and Sara Schneider, the Humboldt State downhiller. 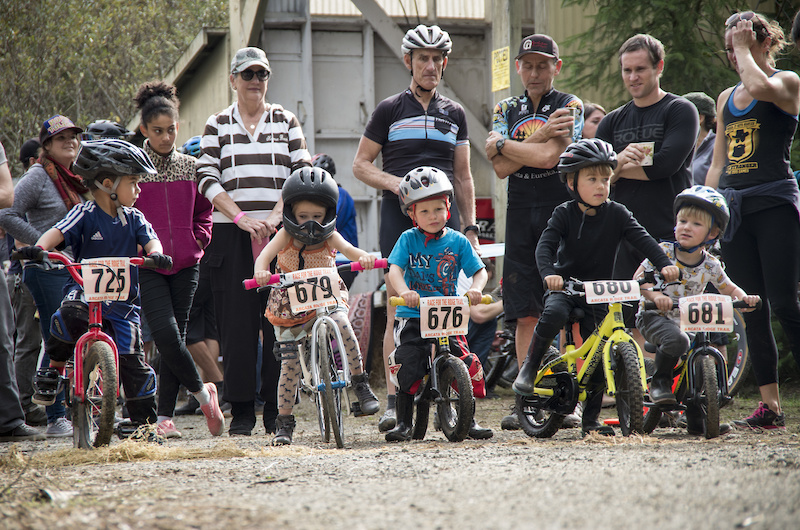 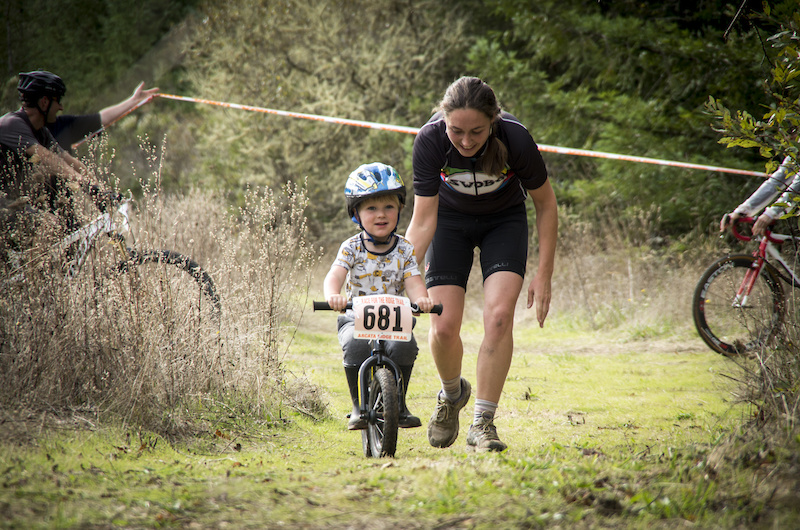 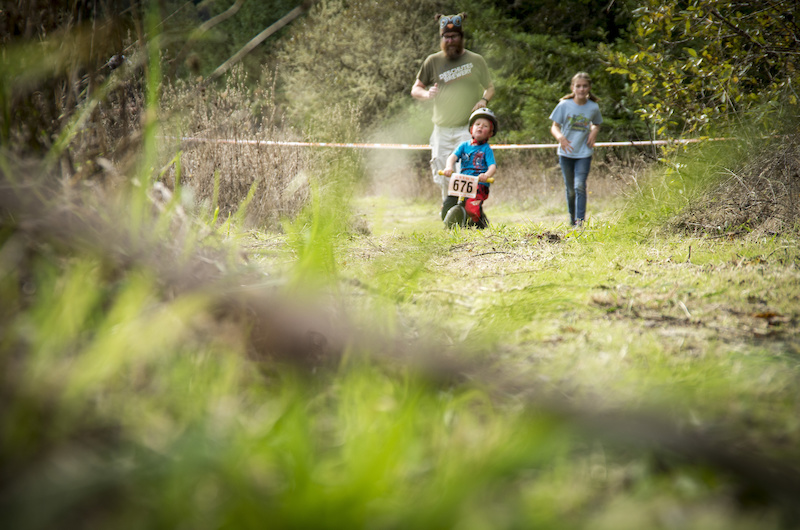 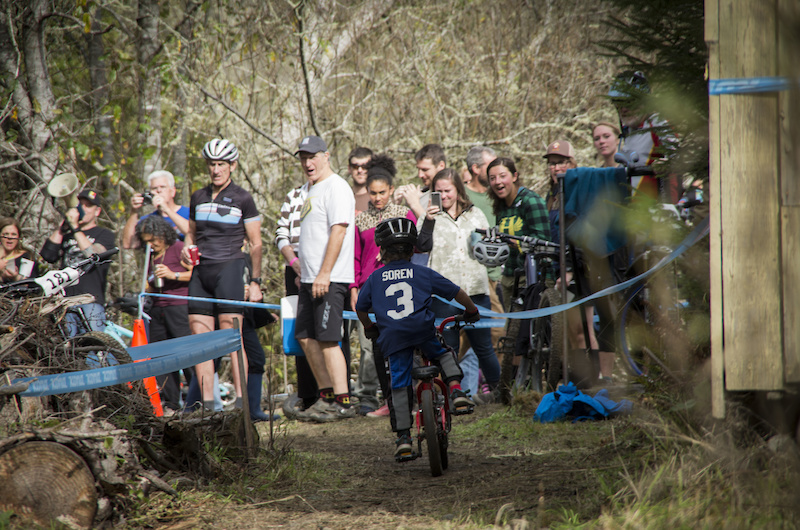 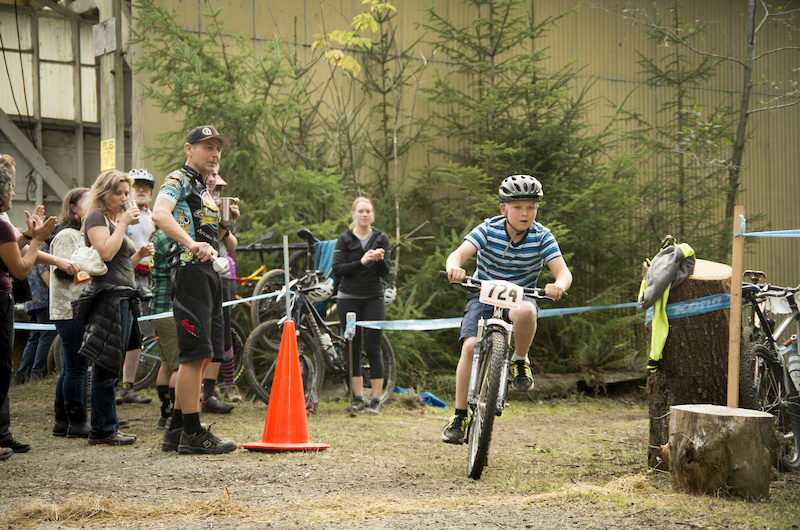 When the 30-minute race ended, the real fun began...the kid's race. A definite favorite for the race directors, the kid's race creates smiles and hard laughs as children subject themselves to a mini version of the adult course. Striders, BMX cruisers, and hand-me-down mountain bikes cover the short course as their riders try to navigate the muddy turns. Adults line the finish area and cheer on the little racers. Tetrault and Brown both laugh about the pure joy of the little participants but also take pride in offering a free race for kids.

“It’s gratifying to see families and friends come together with their kids and to feel comfortable,” Tetrault explains. He and Brown agree that it helps generate good will in the community to make such a wild event a place for families to hang at as well.

After the kids settle down and the course is remarked, the big guns start prepping their bikes and minds for the 50-minute race. The sky is now dark, threatening downpour at any moment. But as true Humboldt riders, nobody pays much mind to the possibility of rain, in fact, some might even invite it. 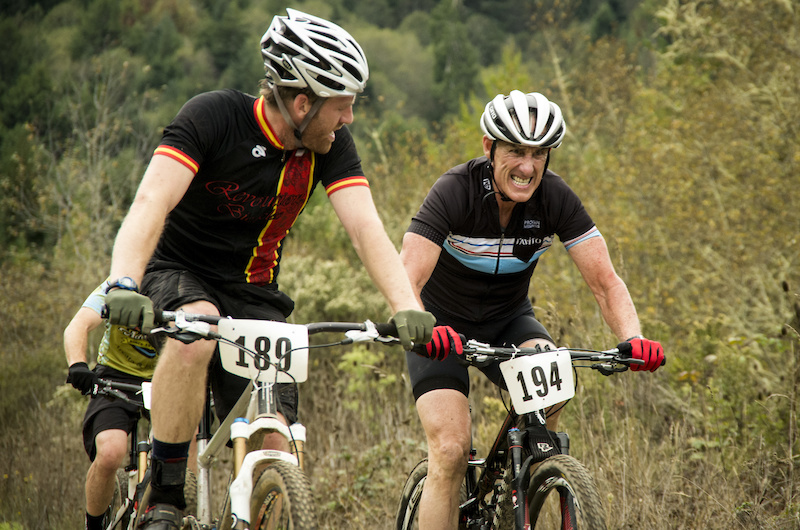 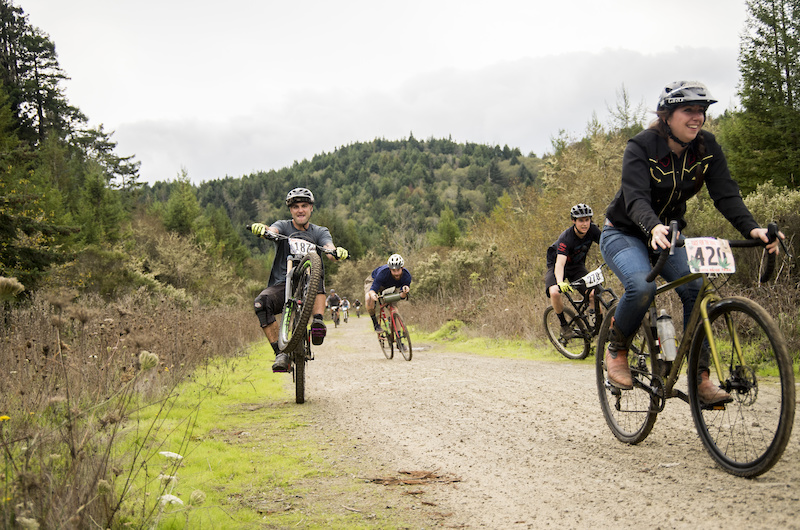 The 50-minute race is unique as it invites a wide spread of riders; from focused and prepared racers on carbon bikes to inebriated bike enthusiasts on home-made penny farthings. Some racers are tucked low and focused, others do everything they can to keep their front wheel in the air. Every year there is a group of course, sweepers who bring up the rear and encourage the top racers to pedal hard and keep having fun. They call themselves the “moths” and will always have a beer to share with a thirsty racer. 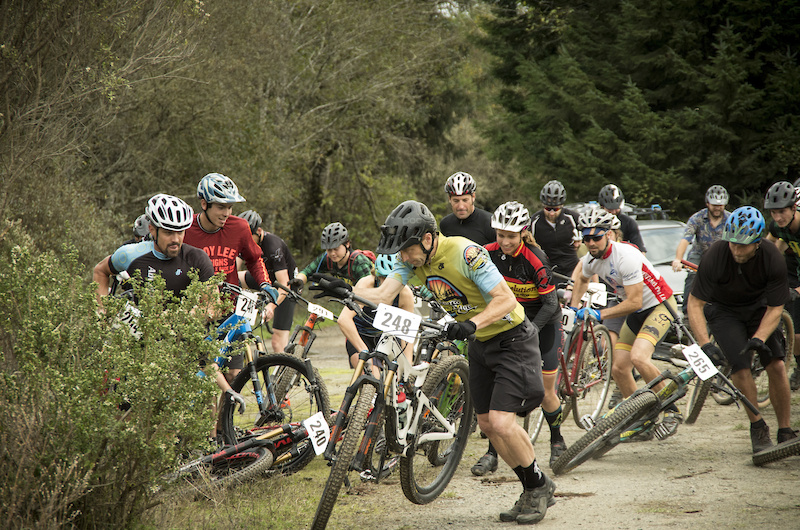 Fans line the long starting stretch of dirt road and racers get in line for the Le Mans start. As soon as the gun goes (which is actually Sean Tetrault yelling go through a megaphone) the riders sprint to their bikes and fly towards the greasy woods section where they will fall into their pace for the next hour of suffering. 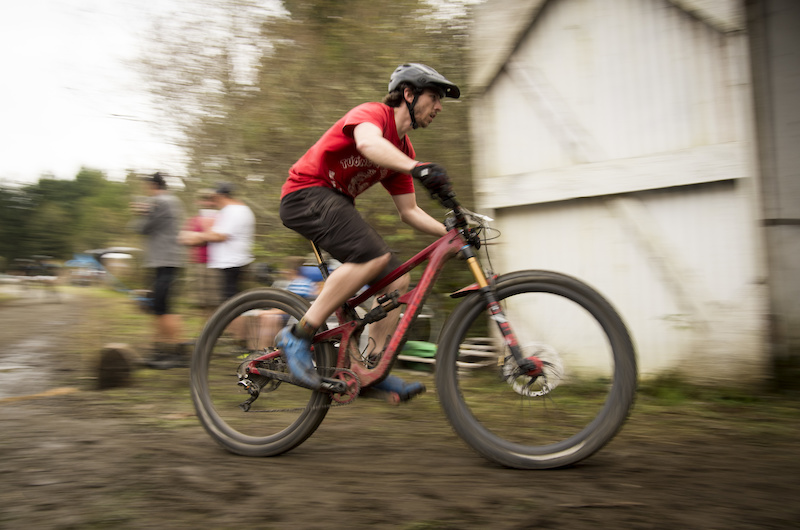 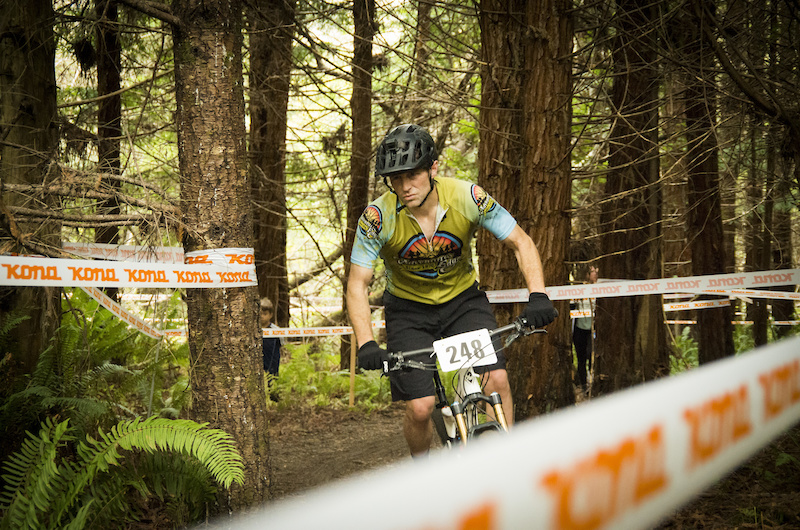 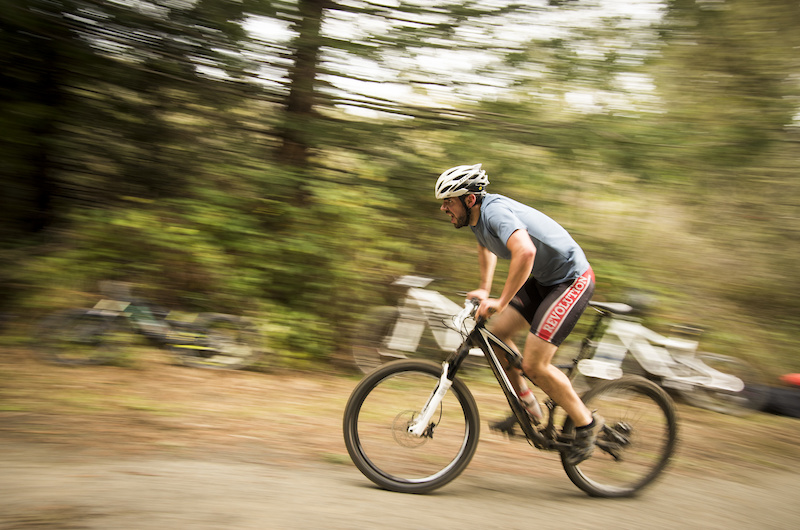 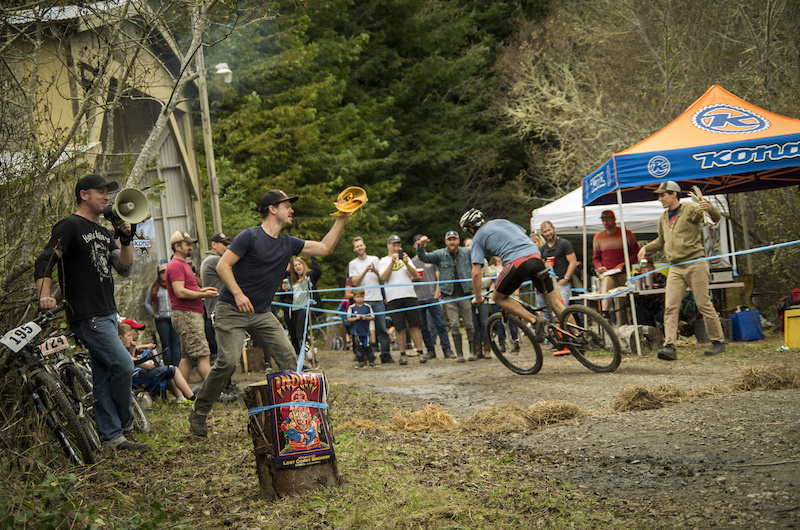 Nic Loomis, a Humboldt native now residing in Davis, CA, manages to hold on to his front position for the entire hour. After a frustrating 30 minute race where he managed two flats on two different bikes, maintaining the lead and taking the win was a sweet reward. The race for second place was a grueling duel between Dylan Wright and Sean Johnson. The two switched positions throughout the hour but in the end, Johnson claimed the number 2 spot. 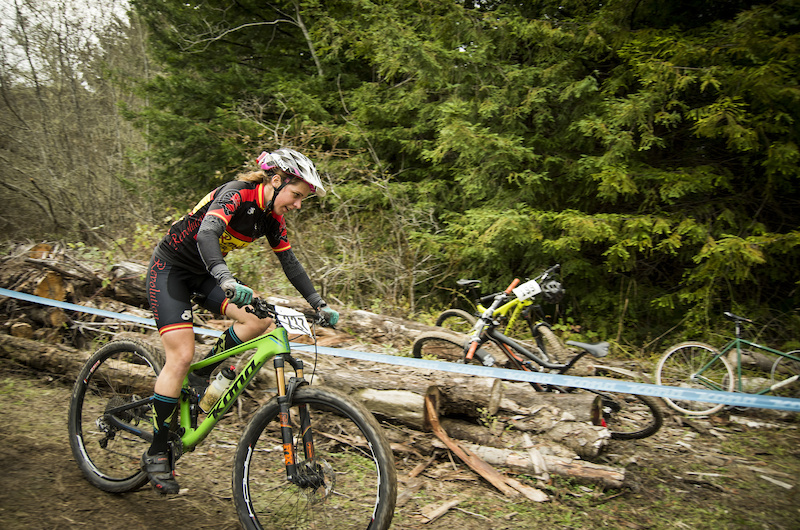 Pro cross country racer, Kaydee Raths, on board her brand spankin’ new Kona Hei Hei snagged first in the women’s field, holding her position as well as a smile the entire time. This is her third year competing at the Bogstomp and says it’s one of her favorite races of the year. “It brings everyone together, no one gives a shit whether you’re fast or slow, it’s all about having fun.” Raths explains “it makes you want to be a mountain bike superhero to the kids.” 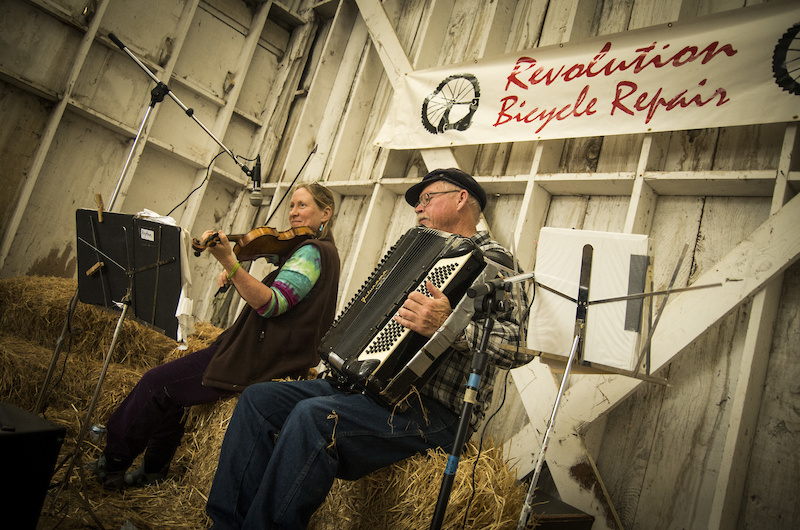 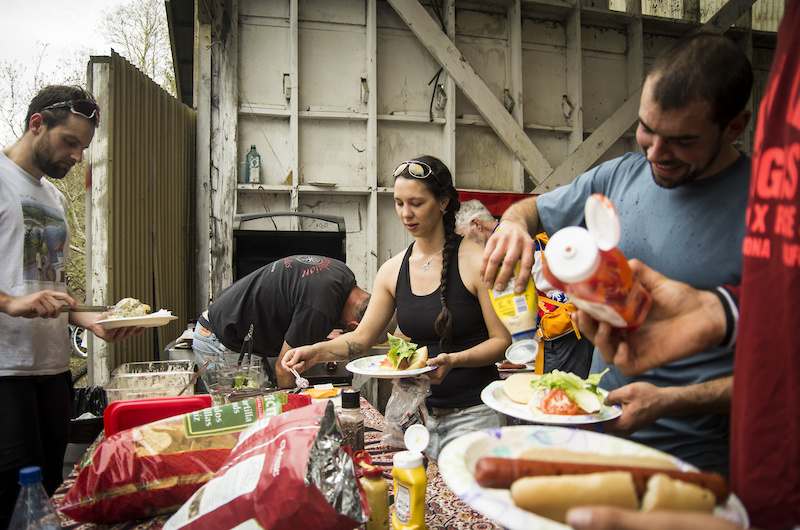 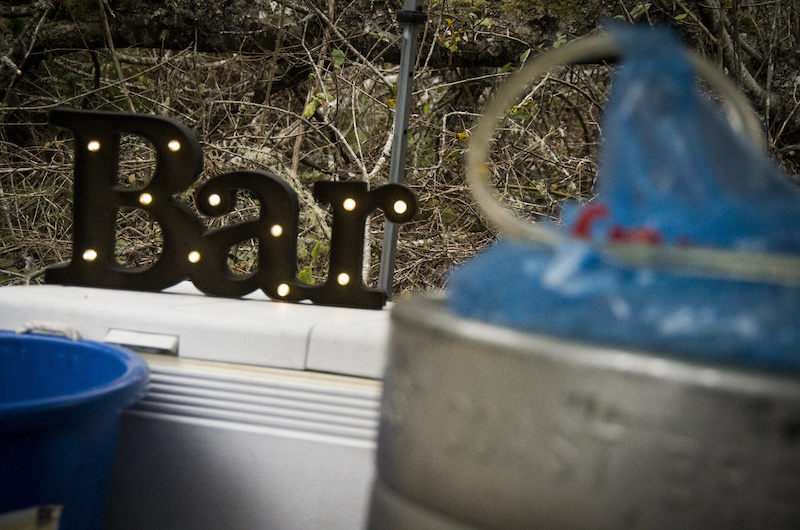 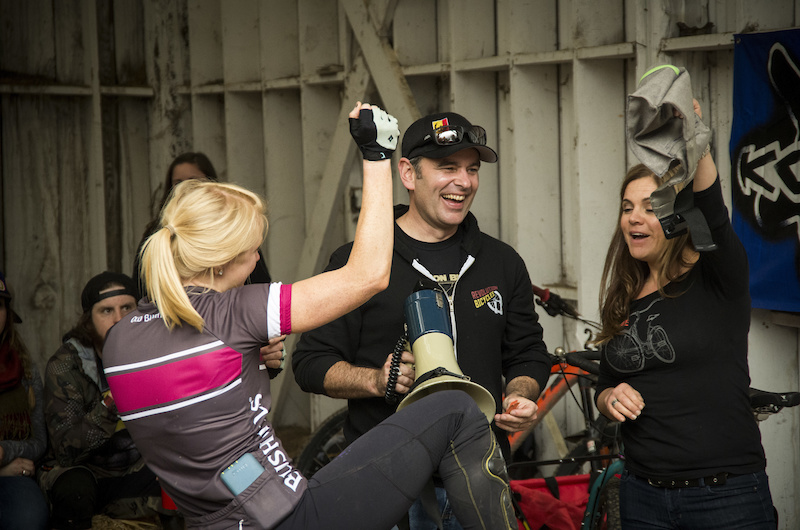 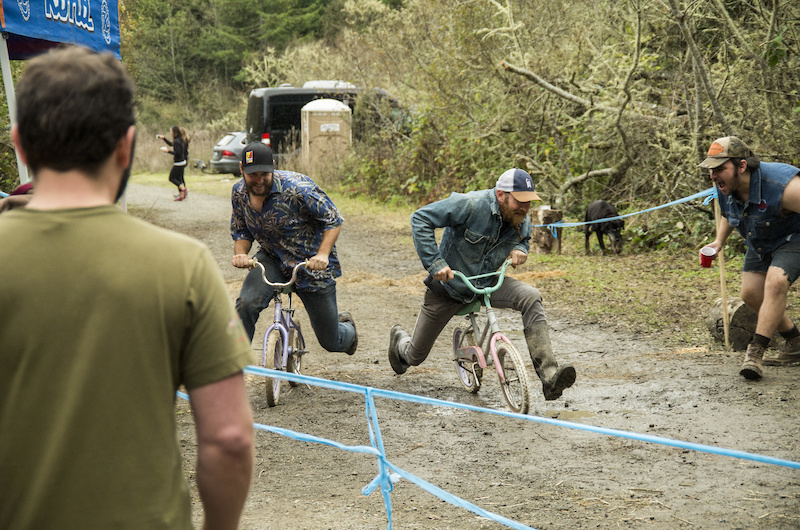 Once the mud settles and the ruts have formed, everyone lays their bikes down and starts drinking and eating. Burgers and hotdogs are grilling, the keg is flowing, and an accordion and fiddle fill the warm barn air. There is a raffle and plenty of friendly faces to make winter riding plans with. If people are tough/drunk enough to stick around, there is always a creative “secret” bike event to end the day. This year Tetrault pulled the cranks off a couple of old 20-inch kids bikes to make an adult strider drag race. 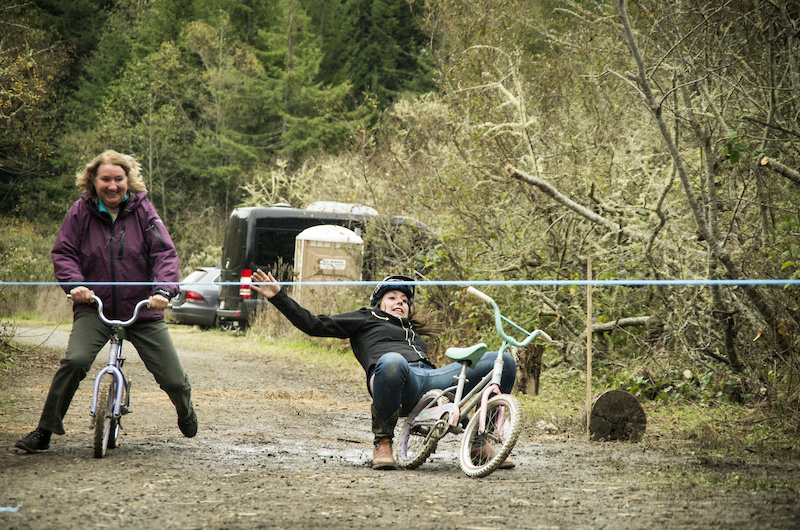 As most people head for their cars and the die hards stay behind the rain starts coming down. Perfect timing. The keg is getting lighter and so is the crowd. Eventually only a few remain behind, mostly board members of the RCMBA. Standing around a fire as the rain hammers down on the roof of the old barn, they reflect on the events of the day as they sip the remnants of their pints. Bogstomp will always offer a place for the Humboldt bike community to come together, drink some beer, and get loose in the mud. 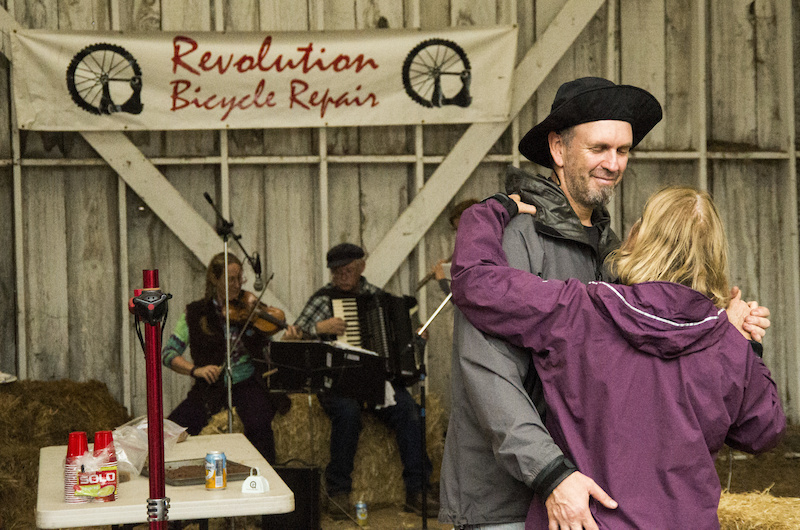 twowheelintim (Nov 15, 2016 at 22:14)
Well written Ali, and those are some really great photos Ryan. You both captured the spirit of the event very nicely. Thank you!

twowheelintim (Nov 15, 2016 at 22:17)
Then you saw most (if not all) of them. It's really more of a short track MTB course. I've done the course on my commuter bike with knobbies, but honestly, I prefer doing it on my squishy bike.
Post a Comment