In September 2020 Tom Van Steenbergen took the internet by storm with his mind melting production Wild West, directed by Calvin Huth. 1 year on from his award-winning edit, Tom returns with Wild West 2, once again pushing the limits of what is physically possible on a mountain bike. 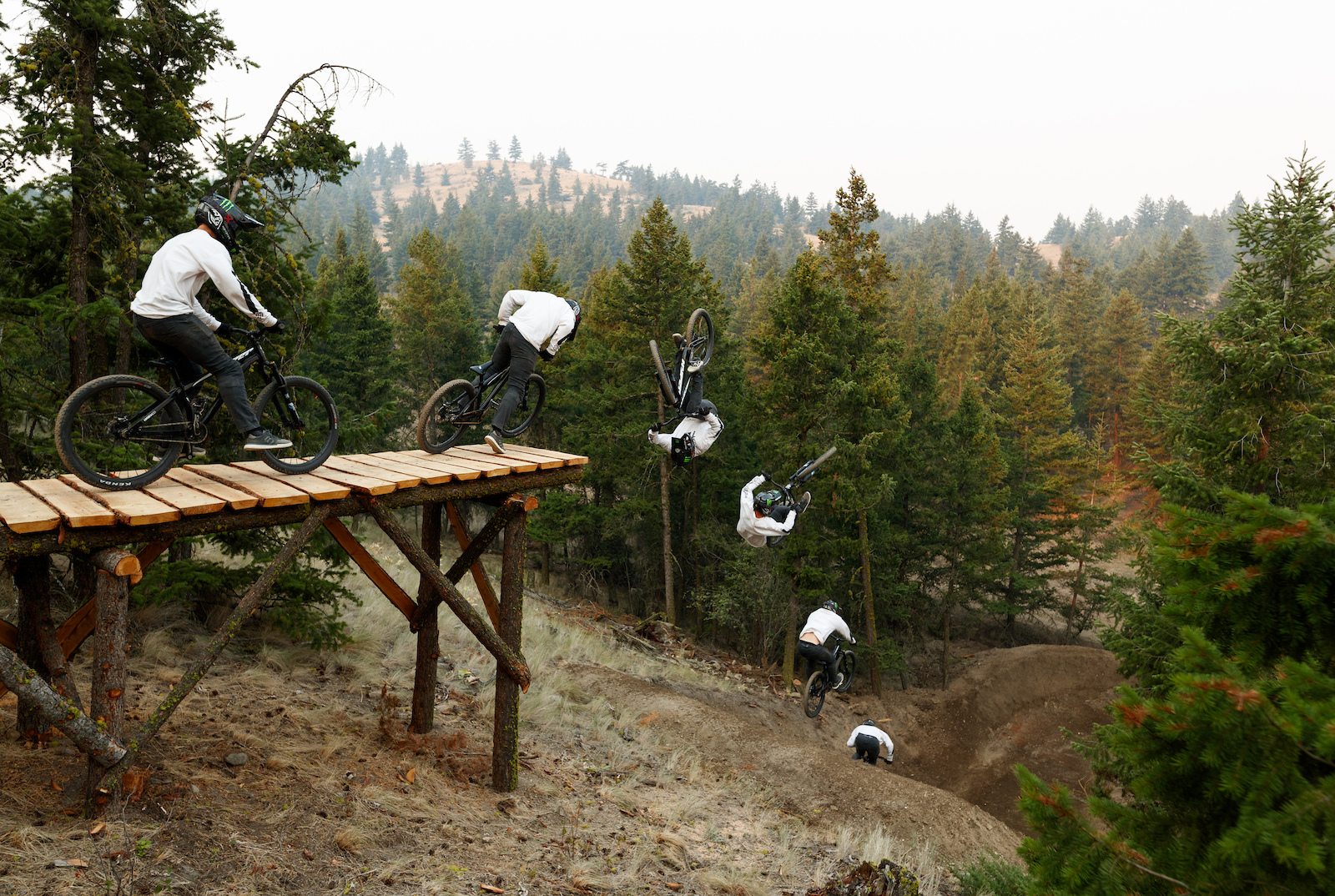 In 2020, Wild West was a statement piece from Tom, it visually represented his personality on and off the bike. Wild West 2 takes this one step further as Van Steenbergen brings a bag of never before done tricks to the center stage. Directed again by Calvin Huth, his unique editing style will you on the edge of your seat, feeling every beat of Tom’s riding as he pushes the sport to its limits once again. 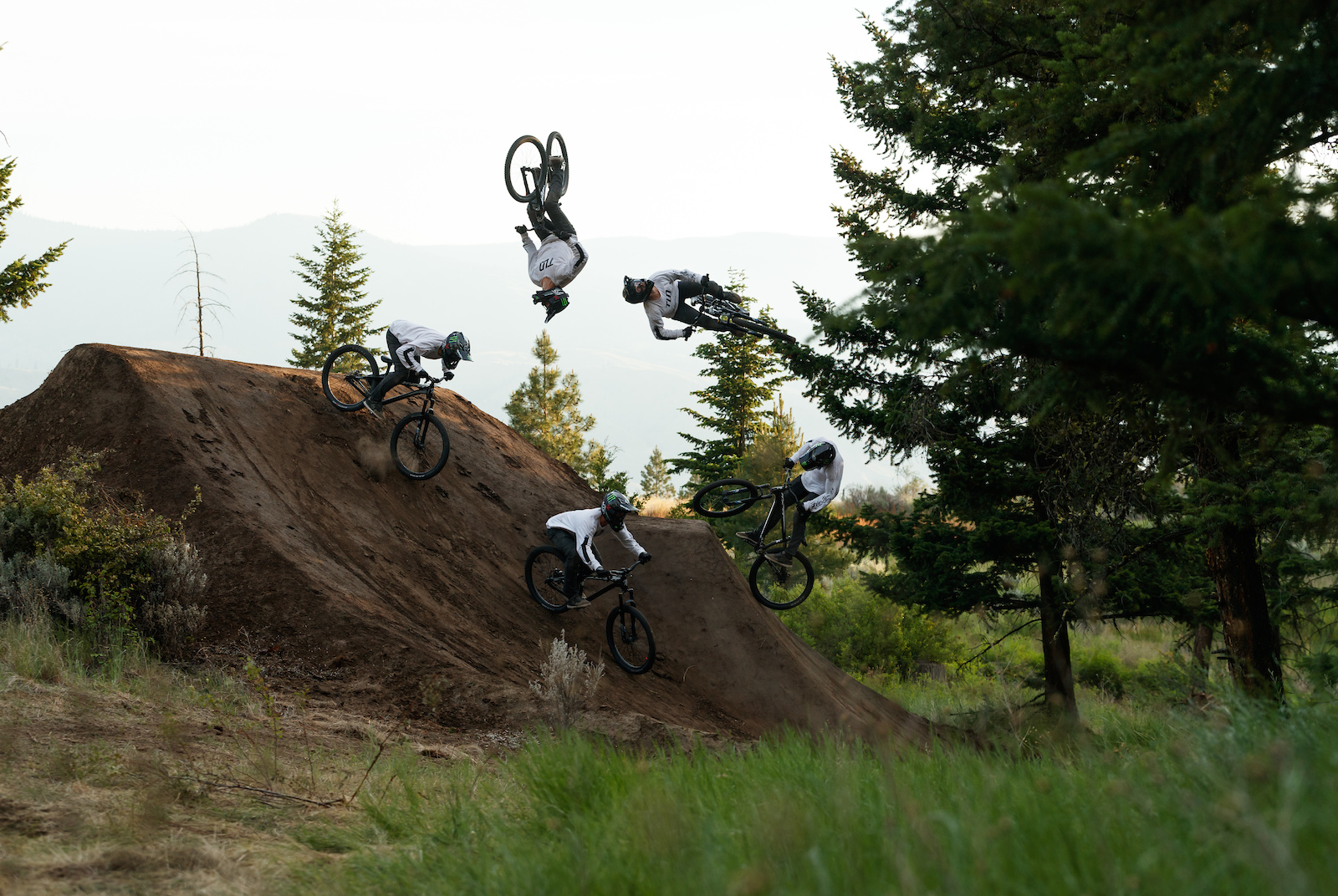 “It’s so rad to be able to do another Wild West video. Calvin and Dan absolutely killed it. Seeing how much everyone improved their skills over the last year is sick. I can proudly say that this is the most technical and best riding I’ve ever done for a video, which was a big challenge after coming back from a femur break. I’m so pumped to finally share this one.“ 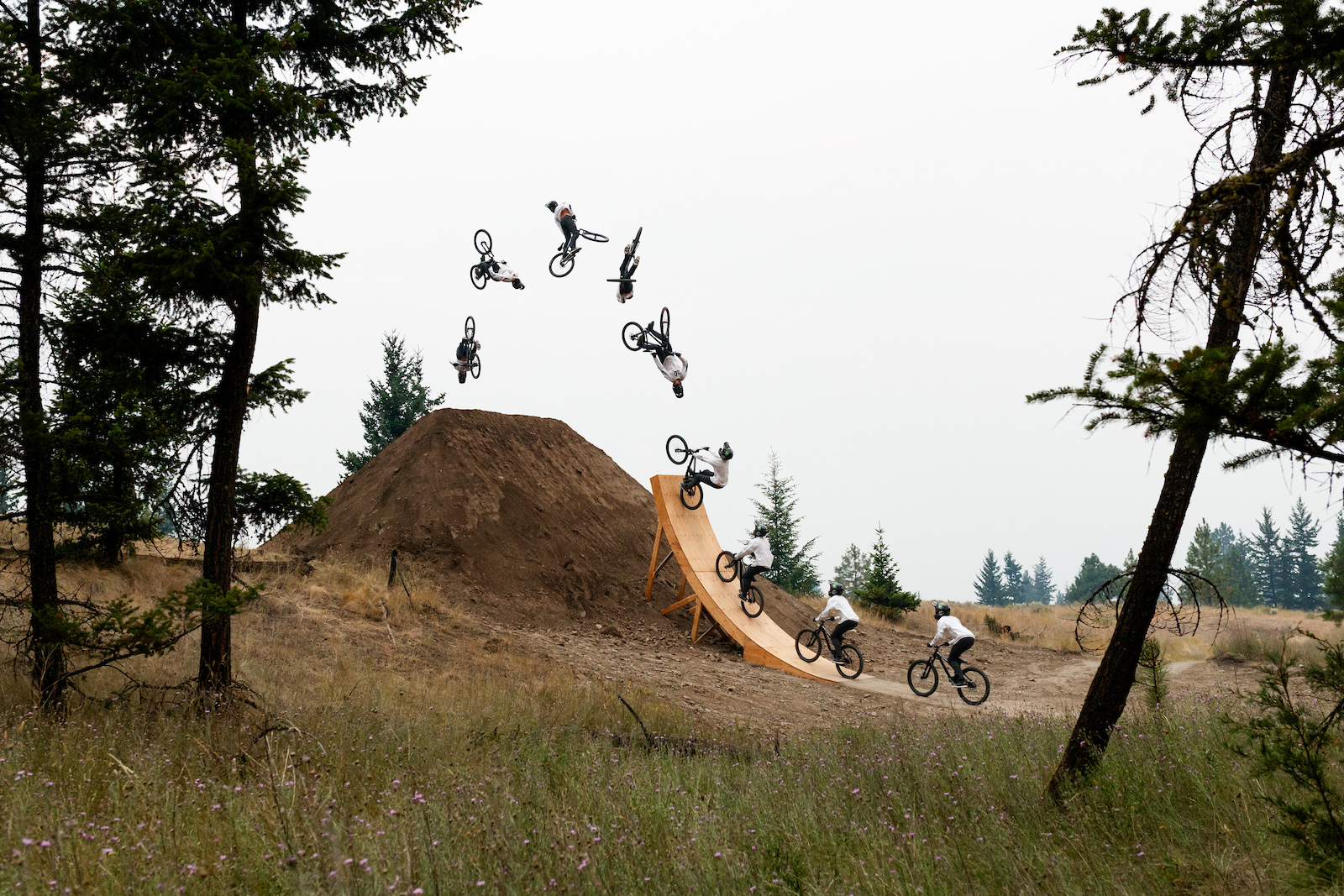 “Once again, it was an absolute blast to be on another big project with Tom. The days can get intense out there very quickly. Especially since Tom drops huge moves as if he’s ordering appetizers during happy hour! Even knowing he’s done the necessary work to prepare, it’s still so gnarly! The reward from helping build, film, and then getting to edit Tom progressing the sport and achieve his personal goals… It’s a wonderful thing to be a part of. 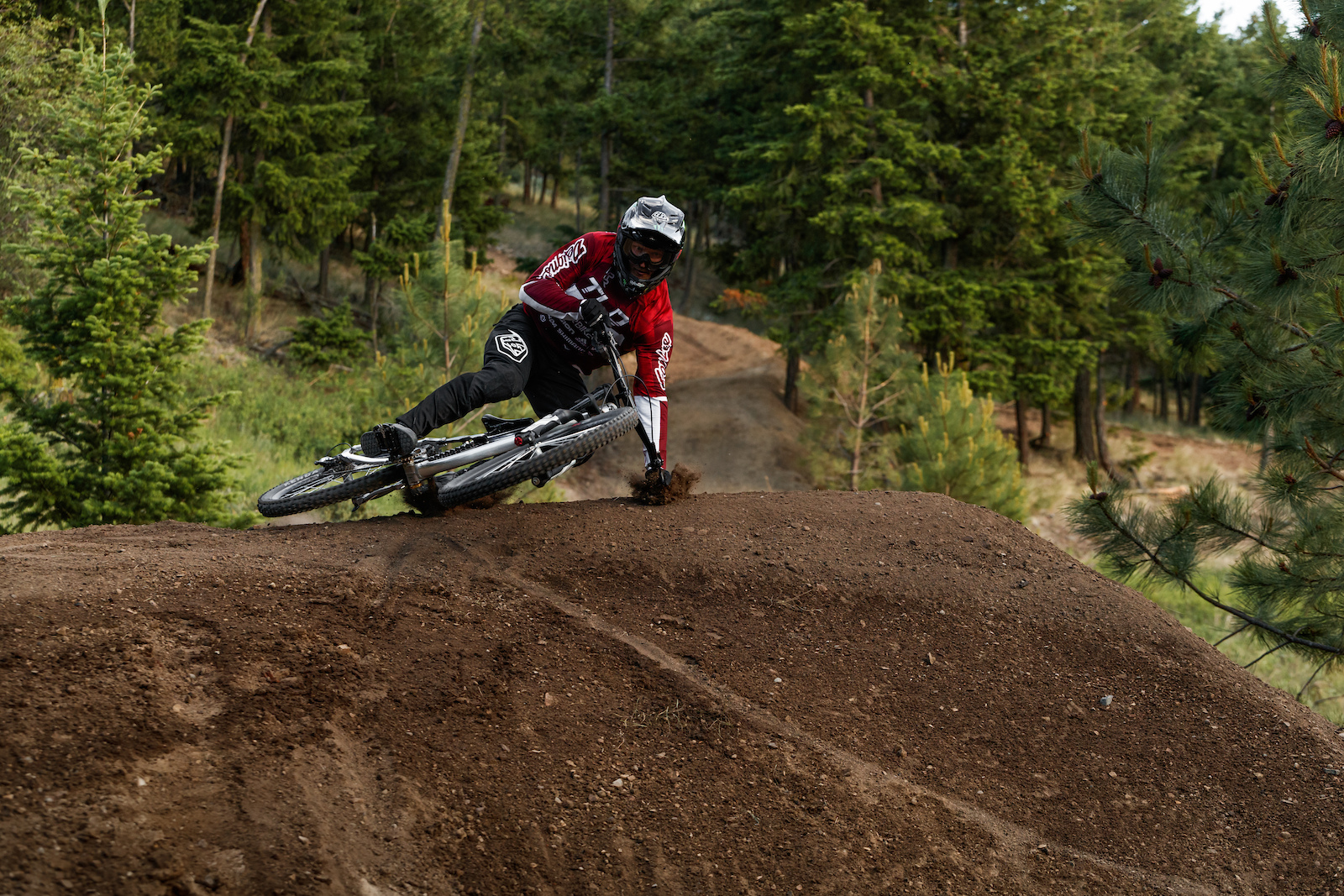 I am super grateful to work with such an amazing crew, I can’t wait for Tom to heal up and get back to doing what he loves! It’s projects like this that keep us coming back. Thank you to adidas Five Ten and Monster for supporting the sport.” Calvin Huth Director 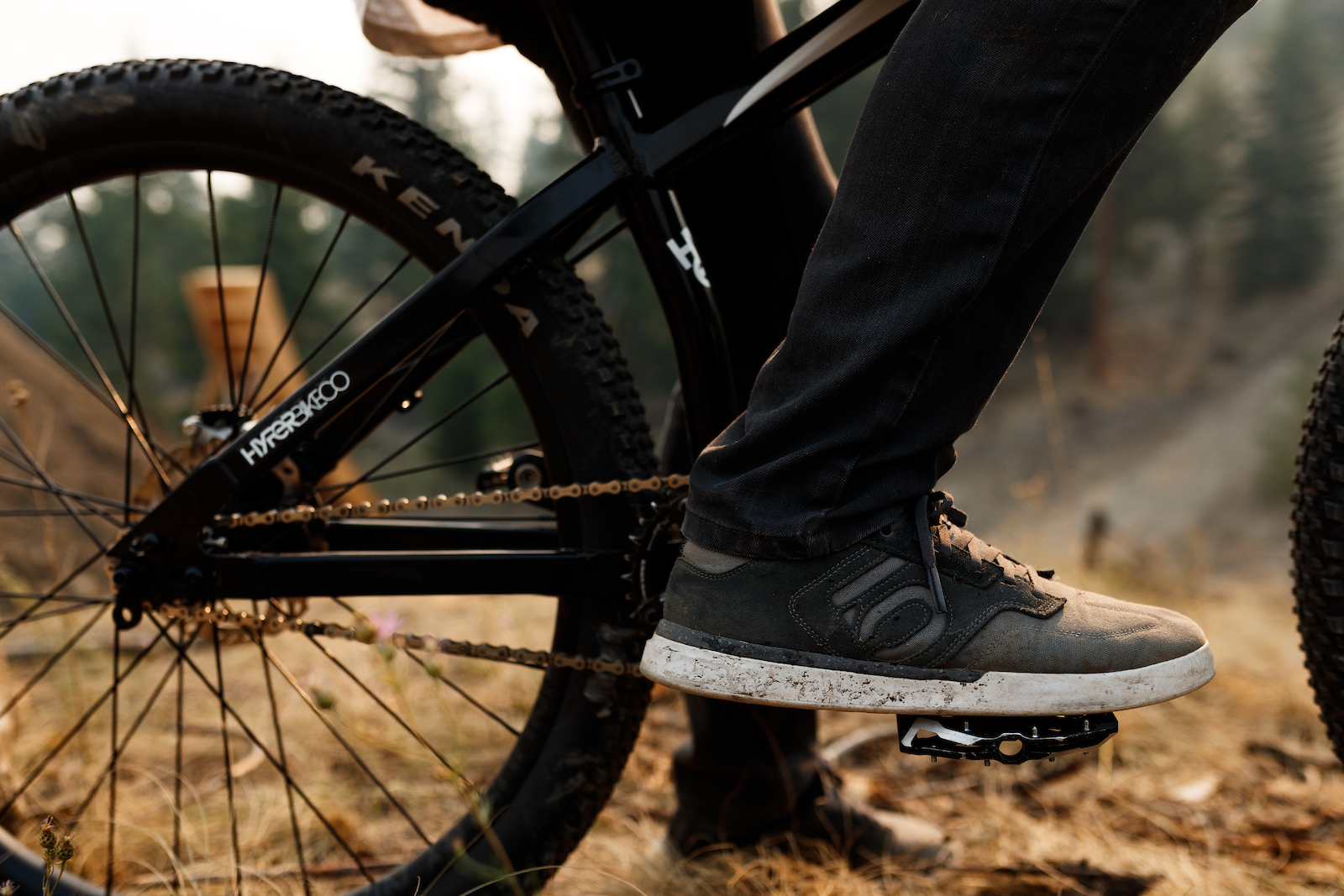 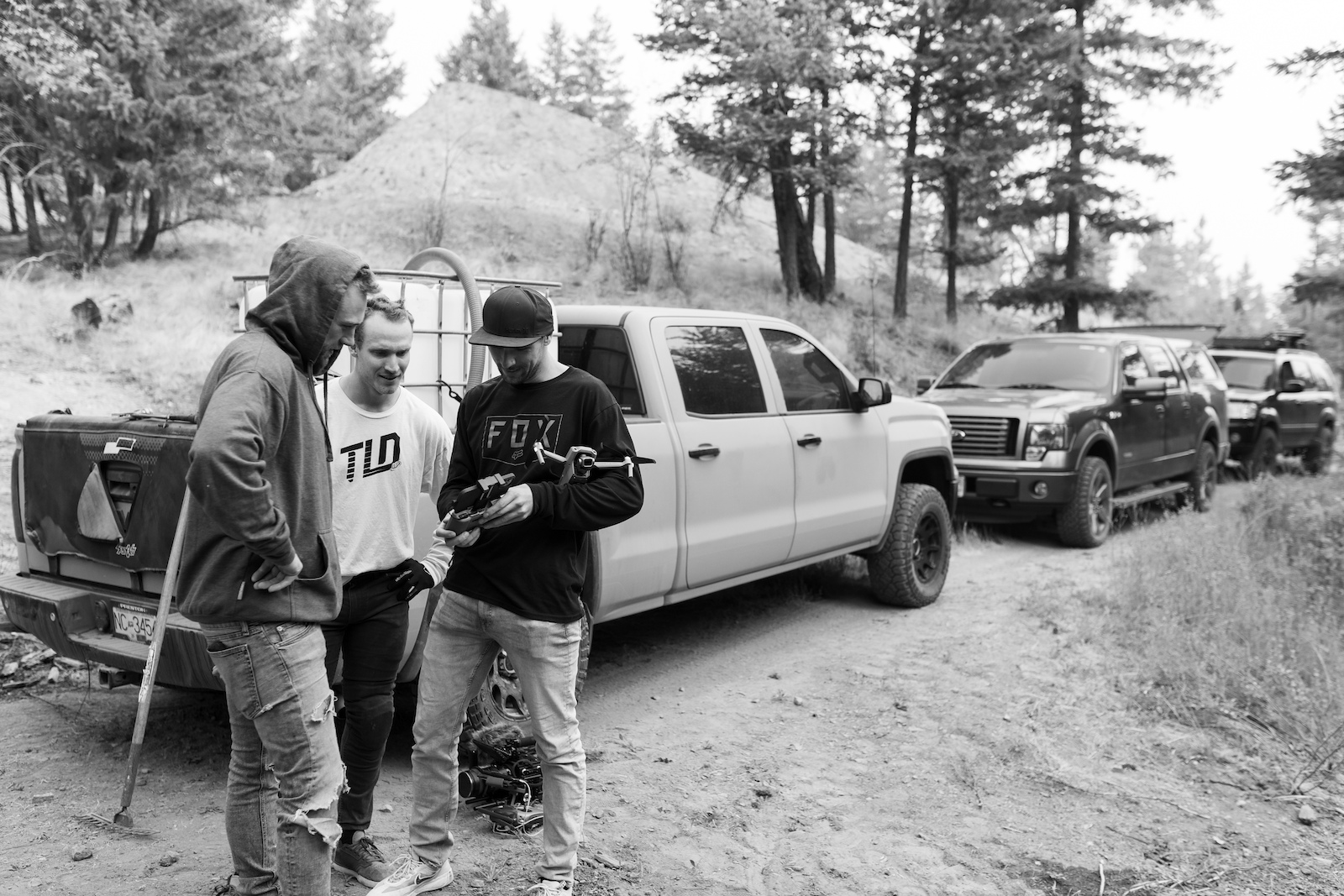 mrhollin (Nov 9, 2021 at 9:04)
WOW. Confident TVS would have won Rampage this year after watching that ... sad to see, hoping for a full recovery. What a legend.

SuperHighBeam (Nov 9, 2021 at 11:52) (Below Threshold)
Impressive tricks, yes. Based on this footage though, can't say that he's a Rampage contender. I need to see huge drops off of rugged terrain to believe he could do Rampage. He's well suited for slopestyle though.

96bikerboss3 (Nov 9, 2021 at 16:57)
@SuperHighBeam: wht the heck. Get your act ogether bro, he's one of the most badass riders around. U must not know what rampage is then. U must have not seen the biggest frontflips in history at rampage . Do u even know what rampage is, the way U talk makes it sound like u dont know what biking is, to say that he's more fit for slopestyle.

themouse77 (Nov 9, 2021 at 17:57)
@SuperHighBeam: I am jumping on the band wagon and gonna shit talk your comment because I am a far more superior human.

Maybe I'm the only one who noticed this but at 1:23, the way he rolls away at full speed (without putting a pedal stroke in) after flipping to a dead-stop onto that lip cannot be how it happened. The small cloud of dust at the fron wheel also looks quite unnatural. Some strange editing going on there!

And at 0:50 I assume that's his real speed? Looks insane.

PS Tom: don't congratulate your bro on King of Crankworx and just chirp him about going sans spins & flips on the Speed and Style event.

Cork 7 is slightly different to a backflip 360 too, yeah some people muddy the waters but there is a distinction

Joebohobo (Nov 19, 2021 at 11:14)
@juicebanger: yeah fairs I’ve seen his insta post calling it that, just doesn’t make any sense giving it that name even if he is the one who did it

Appealingweiner (Nov 9, 2021 at 9:20)
The pause after he lands that double back 360 thing was great editing/directing, cause it allowed me to say 'what the f*ck' before it switched to the next clip.

freeinpg (Nov 9, 2021 at 10:22)
@conoat: No, emergent care is actually pretty good, it's anything elective and follow-up(physio, etc) may be suspect or some long waits

it never ceases to amaze me that there are people that cannot connect the dots on this stuff...making a thing "free" to the user, drives overuse, and a shortage of care when people actually need it. You can never throw enough money at it, because the second it gets better, people start using it more. it never, ever ends.

if you set up a lemonade stand and make it free, what happens? everyone drinks it until it's all gone, immediately, regardless of whether or not they are thirsty.

gtill9000 (Nov 9, 2021 at 10:52)
@conoat: I think people understand that healthcare is a limited resource, and it has to be divvied up based on some criteria. How much money you have is one of those criteria, the question is, how important should that criterium be? Would you feel better knowing your care was delayed because someone could pay more than you, and therefore was treated first, or would you feel better just knowing they were ahead of you in line?

speed10 (Nov 9, 2021 at 11:14)
@conoat: you’re a monster. Lemonade and the ability to get emergency care without fear of lifelong debt are slightly incomparable.

rabcity (Nov 9, 2021 at 11:16)
@conoat: f*ck are you talking about? People are just gonna head down to the hospital out of boredom? Na man. I’ve never had an issue with care in Canada.

bravefart (Nov 9, 2021 at 12:14)
@conoat: what a load of crap . People don’t hospitalise themselves for pleasure or refreshment.

kcy4130 (Nov 9, 2021 at 12:30) (Below Threshold)
@bravefart: You're right in general, but a very, very small percentage of people are hypochondriacs and/or attention seeking and will do just that.

rubenmasi (Nov 9, 2021 at 15:35)
@conoat: as a fellow brit somewhat agree with you here, its a hard one to grasp without experiencing it, but when people in desperate need of help aren't being seen bcos people with a tummy bug or something are going to a&e, pr the ER for our friends across the pond, fpr some antibiotics when the don't need them, just bcos its free then it makes a mockery out of the free health system. Like everything need to find that happy medium. But nonetheless, wtf was that thing in the middle on the dirt quaterpipe thingy

snl1200 (Nov 9, 2021 at 23:47)
Love that it tends to be non-Canadians talking about how slow our health care system is. Perhaps that is true for some things and I recognize I am just an N of one... but I've smashed this meat sack up a bit over the years pretending I was better at things than I actually was and have always had the care I needed in a timely fashion without worrying about spending the price of a POC/ENVE collaboration item on a single Tylenol in the ER (shout out to our neighbours to the south!). In fact, I have a broken ankle at the moment and it was a tough one to diagnose given the location of the crack and was able to get two sets of x-rays immediately, then a surgical consult, CT scan and more x-rays all within a couple days of when needed and all for free-ninety nine... and I know the rebuttal will be "it's not free- you pay for it in your taxes... perhaps but our federal income tax rates aren't that different.

The-Swindon-Secreteer (Nov 9, 2021 at 9:02)
Much deserved after his rampage heartbreak

MuddyBrit (Nov 9, 2021 at 12:14)
So much awesome riding in this video, but I particularly enjoyed the scrub - looked great in the video and there's an excellent photo of it too. Not the kind of trick that scores high in competition but there was just something very pleasing about it!

cpigg (Nov 9, 2021 at 10:44)
You watch these videos of incredibly talented athletes doing truly death defying tricks and you can start to become numb to it all... But then someone takes it to another level! If you saw these tricks in a video game you would dismiss it as unrealistic. I've watched this video three times and can't imagine the skill, physical ability, and spatial awareness it takes to pull this off. Remarkable riding!

that was some next level sh%10-4 flips around and faces the other way ? I had two watch that 3 times bf I could even comprehend wtf he even did? What a total shreadfest and thats some creative stuff too. never seen the whole reverse dir deal and he pegs it. He was killin it the whole time
WTG Steam bergen The flyin freight train
redbull should give Tom some Rampage Redemption

LeoGamboc (Nov 9, 2021 at 9:16)
yep, super sorry he felt down on rampage. We would see an amazing run. Calvin what to say, it's bonkers. A few sec before you changed the B&W to color my brain was, ok maybe that is enough, such good timing and a unique way to remember the edit. I was sorry this lasted only 2:34.

stainerdome (Nov 9, 2021 at 19:04)
Ginormous testicles and major talent is a winning combo

BenTheSwabian (Nov 9, 2021 at 14:24)
Damn, this man is wild! Seems to be getting better every year. Wild West 1 is already one of my all time favourite MTB videos and this is definitley a worthy sequel. Well deserving of a must watch endorsement.

ripridesbikes (Nov 10, 2021 at 10:22)
Watching a TVS extra large Cave Man brings a tear of joy to my eye. His Rampage Cave Man will always be in my top 5 favorite Rampage moments.

dungeonbeast (Nov 9, 2021 at 9:32)
Follow his Instagram. He posts quite a bit. He walked down his hallway today sans crutches.

njcbps (Nov 9, 2021 at 10:30)
Impressive video, editing and riding. The shot at :49 is especially effective at showing how fast he's travelling.

I prefer my mode of "relative fast"–meaning if it feels fast, it is. lol

rileygardner (Nov 9, 2021 at 11:29)
So well-rounded and so much incredible riding. Tom, you are an MTB legend! Even the Pinkbike trolls haven't been able to rain on this parade!

foxinsocks (Nov 9, 2021 at 14:00)
Wow - Stepping things up! Some of those moves were just unbelievable. The speed and energy of those rotations- ridiculous. The scrub alone was worth it!

maxx-x (Nov 9, 2021 at 9:36)
just wow! usually i don't appreciate slopestily, trick filled videos much but this edit is just wow

Calvin Huth and Rupert Walker working on the same edit? Needs to be good..

bikestocker (Nov 9, 2021 at 16:53)
Good choice on the Martinez hammer! Watched this about 15 times already, good work everyone!