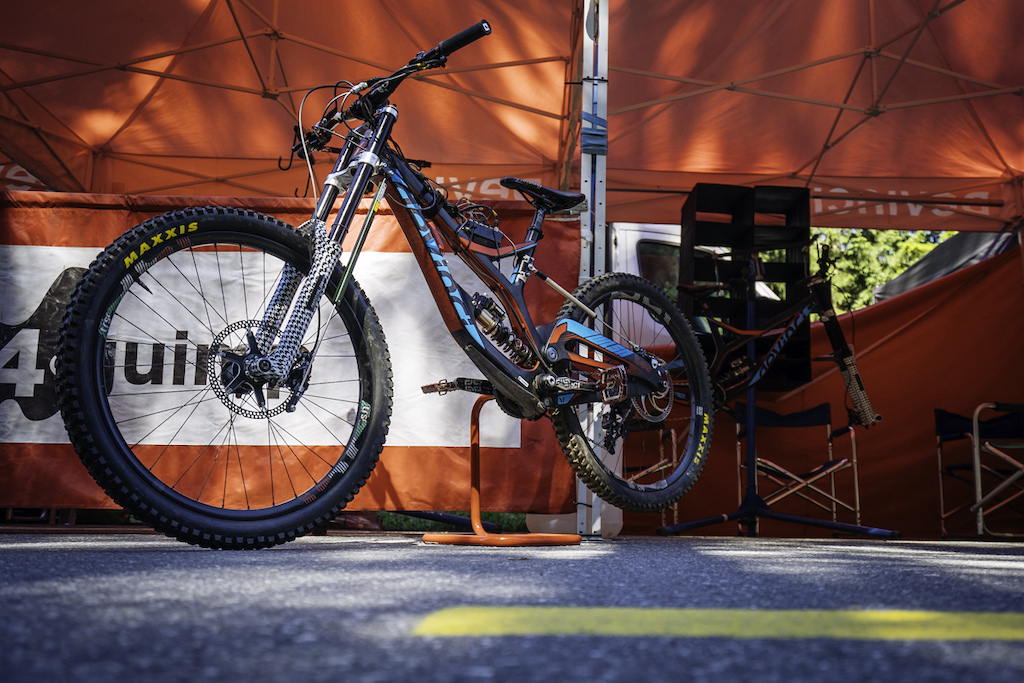 PB photographer Matthew Delorme photographed a yet-to-be-seen downhill fork being wired up for data acquisition at Lenzerheide in the Team AB Devinci pits. The manufacturer of the fork requested that we withhold their name, but offered up enough information to throw tech geeks a bone.

The official word is that the fork is a "three-position" design (I have no idea what that means, beyond speculating that its stroke can be adjusted to suit 26, 27.5 or 29-inch wheels). It's an air-sprung fork and the dual air valves on the spring side fork cap hint that there is a secondary bottom-out chamber inside, like the Manitou IRT and similar aftermarket retrofits for popular air-sprung forks. Its designer says that the fork can be tuned in less than five minutes to quickly adapt to changing track conditions. The damper side seems straightforward with high and low-speed dials. 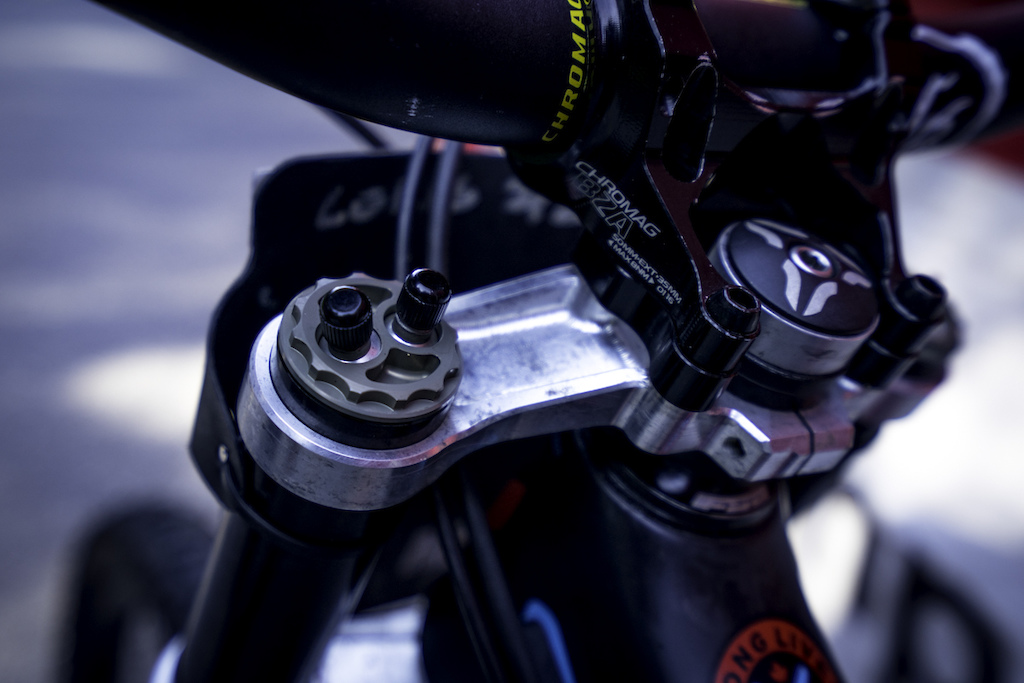 Dual air valves could control the negative and positive sides of the air spring, but more likely, it's an adjustable bottom-out chamber. 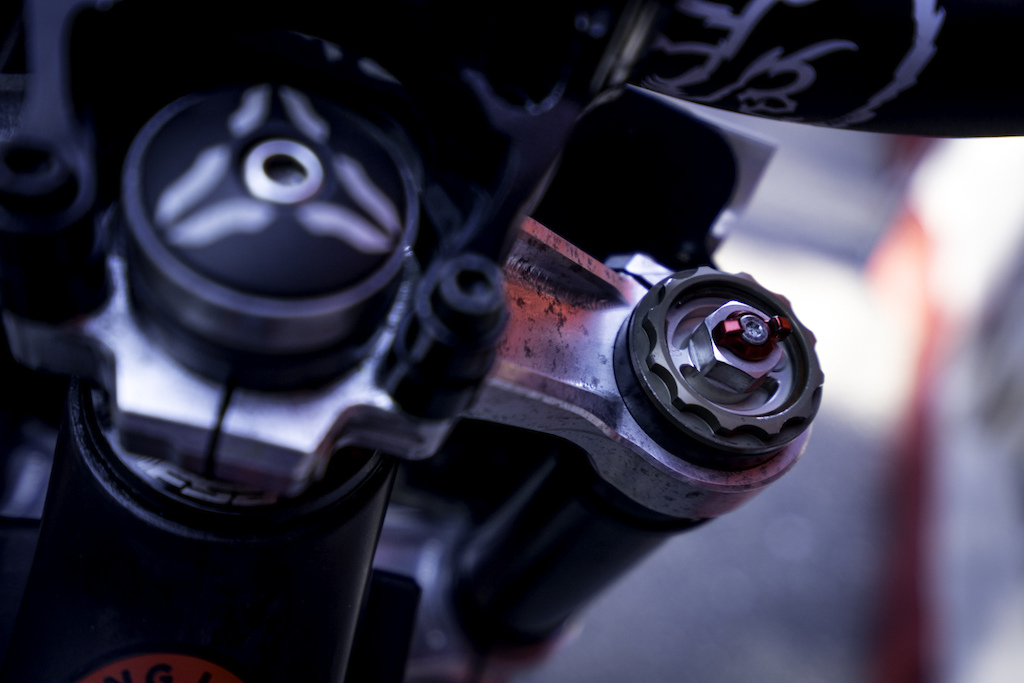 Sparse control dials, probably for high and low-speed compression. The look is very Italian, but they could be one-off machined parts.
They have been testing the fork at the World Cups, presumably with Devinci AB team riders, and using data acquisition to bring the fork up to speed. Look closely at the images and the CNC machining is evident in the crowns. The fork caps and damping adjustment dials, however, look finished, although sparsely styled. Officially, the lower design is not set in stone, but that may not be true, because those wrap graphics are used commercially to mask profiles and design elements from curious photographers and copycats when seen in public. An interesting clue may be the bike's shock, an EXT Arma HBC shock, made by Extreme Shox, but once again, that is hearsay. All will be revealed, it seems, at Val di Sole, where the manufacturer plans to make their big announcement. 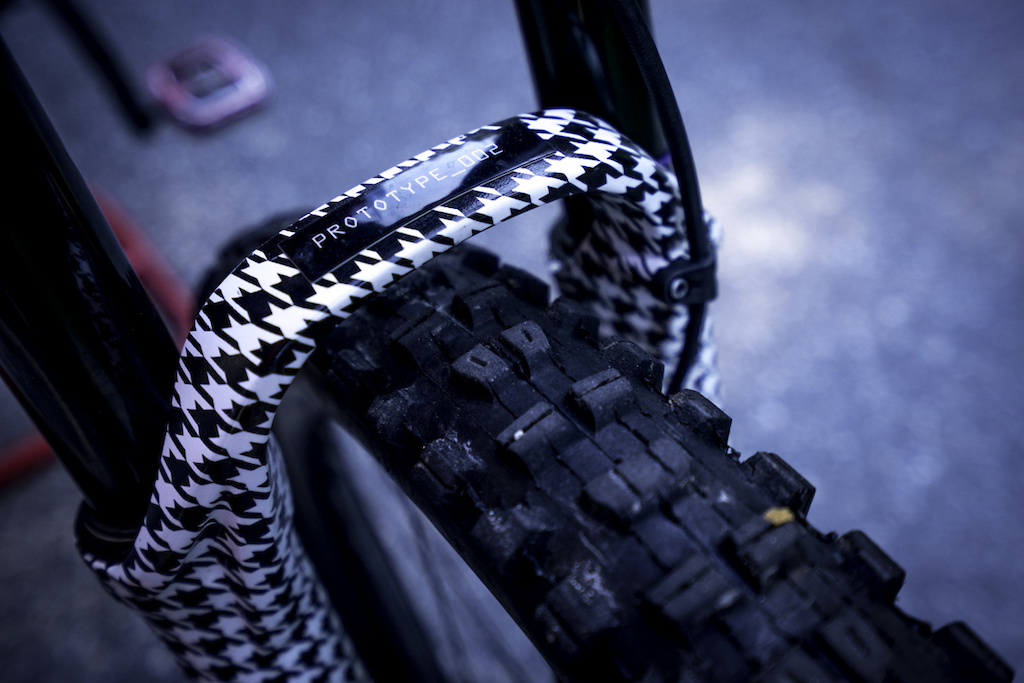 I know I have seen that wrap-around arch before... 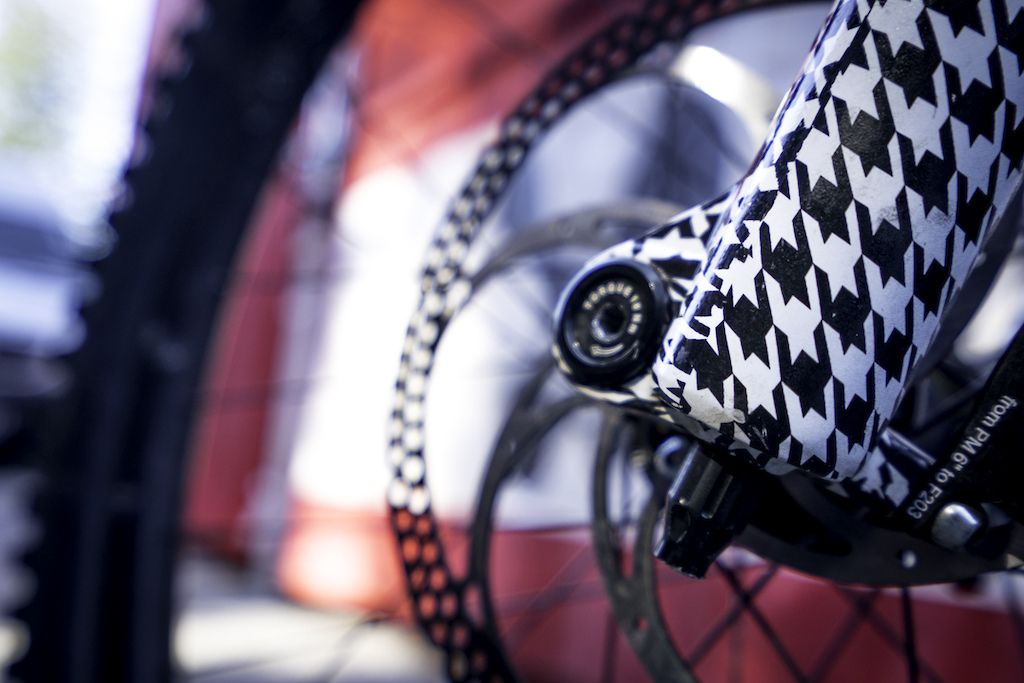 Is that an odd shaped nut or a dial below the spring-side? 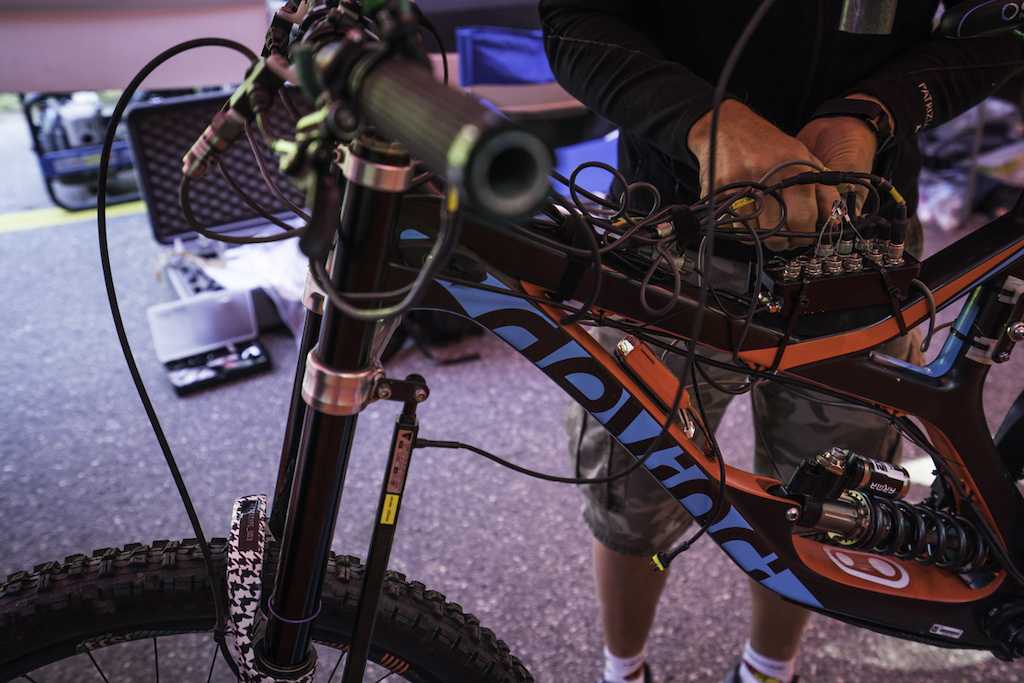 The shock is an Arma HBC from Extreme Shox. 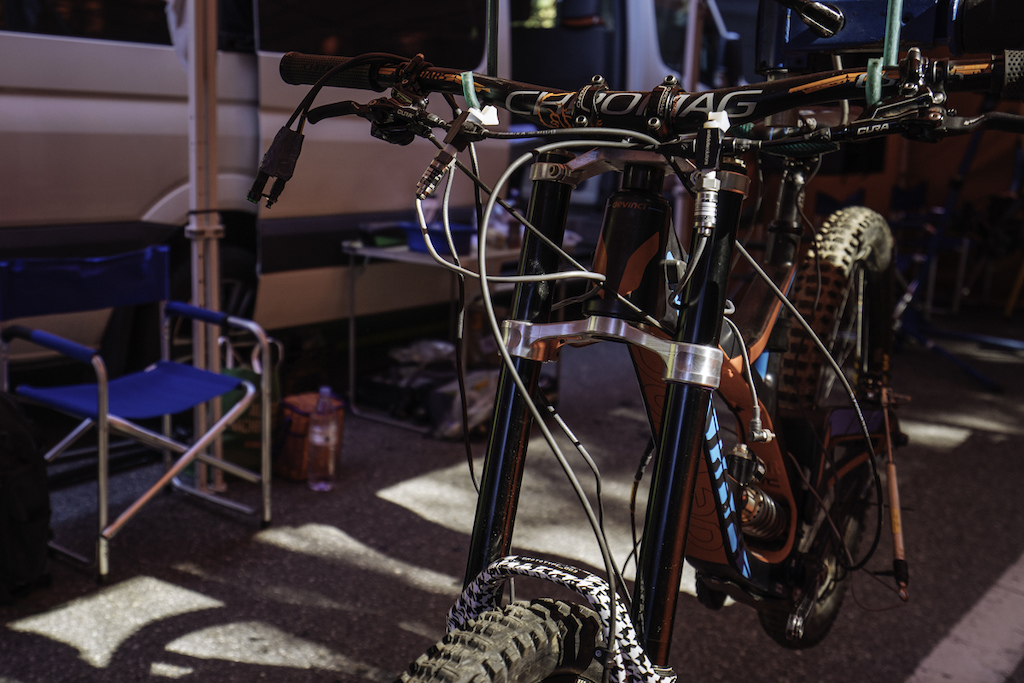 Imagine trying to silence all of those wires. 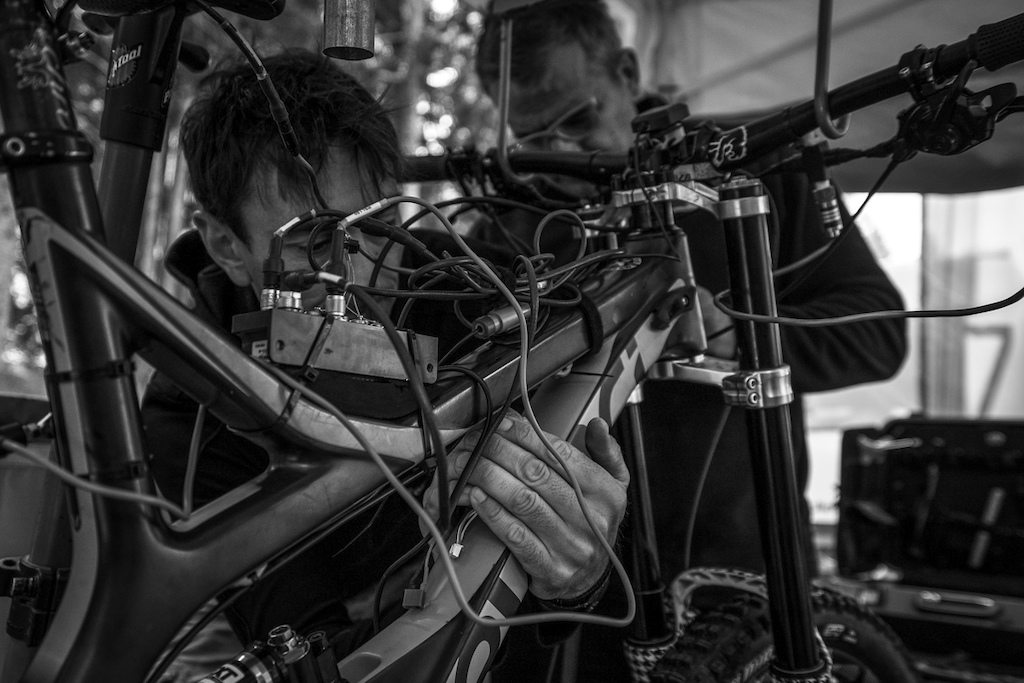 The designers say they have been testing at World Cups 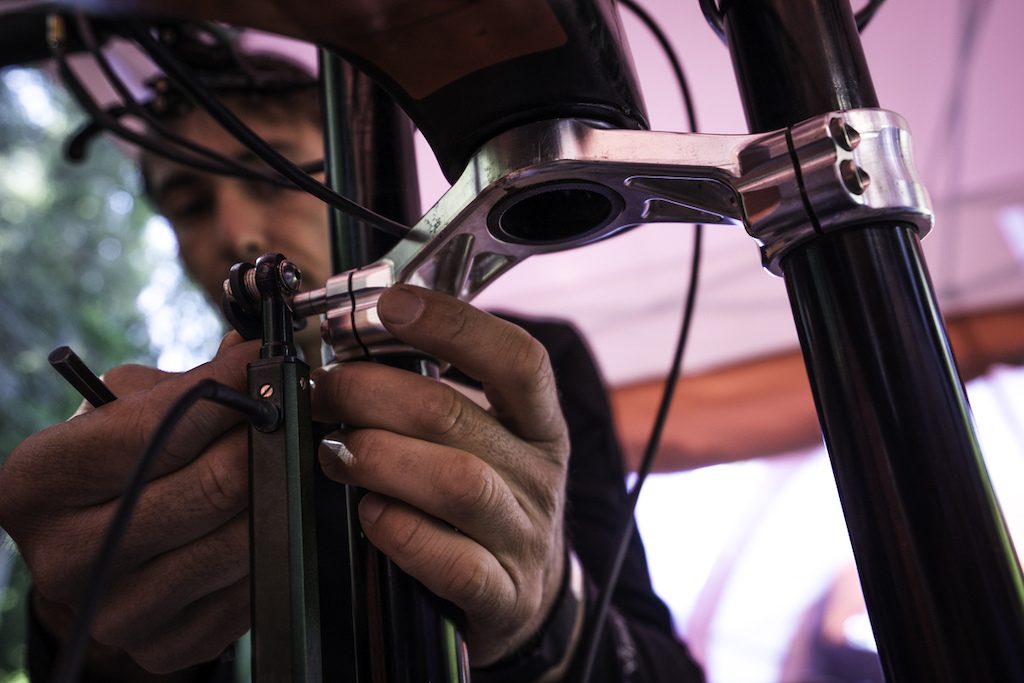 Fixing the fork position sensor. CNC-machining marks are evident on the fork crowns.

groghunter (Aug 2, 2017 at 7:29)
@riish: In your defense, the headline literally says "Devinci Pits." I came to the comments trying to figure out how that works when Devinci pulled their factory team. Anybody know what team this is(DRG maybe from what you said?) These could even be just bought on the market if the team didn't get a frame sponsor this year, it's not unheard of.

ORTOGONAL555 (Aug 2, 2017 at 8:59)
@groghunter: afaik ab devinci is actually a semi- factory team, beeing the only one directly sponsored by Devinci

pourquois-pas (Aug 2, 2017 at 9:59)
Formula for sure... the caps, the arch design, even the small negative machining around the lower clamp is the same as the Selva.

they are sponsored by EXT and Formula....almost full italian team.

wanleggedwinston (Aug 2, 2017 at 23:25)
@listeryu: exactly- a few of the riders including juniors were running this at fort William (I had the job of attaching a transponder chip to the fork of every bike) and when I asked the mechanics what brand they wouldn't say

OnTheRealMedia (Aug 3, 2017 at 0:43)
@fssphotography: BOS suspension, top caps are similar only to their new inverted fork

stefanfresh (Aug 3, 2017 at 11:05)
@Richard Cunningham This was already at vallnord world cup, I wondered why this hadn´t showed up yet.

FTOD (Aug 3, 2017 at 12:54)
@groghunter: Devinci being a Canadian brand (also based in Quebec) it would make sense that they had a presence at MSA for the only Canadian stop on the circuit this year.

optimumnotmaximum (Aug 2, 2017 at 7:59)
@redbaronmulisha: after how many hours of riding ? in which conditions ?

WAKIdesigns (Aug 2, 2017 at 14:13)
@Klainmeister: married with kids, can't even wank in the toilet, have to go to the cellar and hide behind the boiler. Wifey goes away with the kids, you want to meet buddies for a ride and then for a beer. Suddenly you realize, yes! I can wank unobstructed!!! I will be a man again!

Don't take anything for granted kids, that's all I mean...

mrcookie (Aug 4, 2017 at 0:30)
You can scrub that one in the shower if you have the right conditioning lubricant.

WAKIdesigns (Aug 2, 2017 at 9:08)
There is one detail if it really were a Stendec fork: air spring. Dave Garland used to be on the coil side of things

ka-brap (Aug 2, 2017 at 10:31)
@WAKIdesigns: I do recall a recent interview (also on Vital) where he was continually praising the coil spring during the data acquisition testing with Giant... VDS will be even more interesting now

bakemono (Aug 2, 2017 at 21:12)
Must be a collaboration between Formula and Stendec. Here's a PB picture earlier this year.

groghunter (Aug 2, 2017 at 7:32)
Houndstooth, it's originally a pattern used for causal suits, back when people still wore suits when they were doing leisure activities (think english nobility during a fox hunt or something similar.) Answer made some bars with the pattern a few years ago.

Wesley-Swipes (Aug 2, 2017 at 11:33)
I would pay out the nose for a series of hounds tooth patterns in different color prints. Or Argyle. Oh god, I never realized how much I want Argyle patterned fork lowers until today. I need this.

groghunter (Aug 2, 2017 at 12:32)
@Wesley-Swipes: A wrap should actually be pretty easy to make happen if you talk to one of those places that does cars.

"Well they machined it, and it is still unpainted metal, so..."

iamamodel (Aug 2, 2017 at 15:46)
I have a suit in a very small version of houndstooth called puppytooth. And I'm not joking on either statement.

Poulsbojohnny (Aug 2, 2017 at 8:45)
That is a serious telemetry rig they have on that bike. Very cool. It is good to see that level of engineering and testing on a bike product. Shows how far the sport has come vs the elastomer days of old. This isn't just stick it on the bike and if it doesn't work, we'll tweak something on the next model. This is real testing and evaluation.

FuzzyL (Aug 2, 2017 at 10:01)
Yeah, from everything I see, Formula seems to go further in that respect than almost everybody else.

AJ420 (Aug 2, 2017 at 13:04)
Good to see devinci testing out a different brand of suspension here's hoping they are moving away from the big s brand on their bikes

xsteno85 (Aug 3, 2017 at 1:50)
BECAUSE you just missed all the italian races where ARGENTINA BIKE (Italian DH team) is running this FORMULA fork since months!

brappjuice (Aug 2, 2017 at 7:48)
Top caps look like Formula, and the rapid adjustment sounds like it lines up with their other offerings currently.

GMAN1 (Aug 2, 2017 at 8:33)
It's a standec prototype. It's the Italian National champs bike... Another reason Vital are all over Pinkbike these days!

renno (Aug 2, 2017 at 9:35)
i agree with bennetking and spicy4me thay are the same as marzocchi folks a surprise comeback

norland-dynamics (Aug 3, 2017 at 0:04)
Well.. Clearly the new Formula DH fork. It will be presented officialy in Eurobike. Be prepared!

mhoshal (Aug 2, 2017 at 13:48)
Nothing about it looks like Marzocchi if you had of said any other brand id agree but Marzocchi has that unmistakable round crown arch like how rockshox looked in the mid to late 2000's

FarmerJohn (Aug 2, 2017 at 9:22)
The new RockShocks Houndstooth to be the big brother of the Argyle?

gonecoastal (Aug 2, 2017 at 13:35)
I'm sure it'll have some weird offset that makes it practically unrideable.

Kramz (Aug 2, 2017 at 4:30)
What exactly are the point of dropouts on forks? Wouldn't the fork work better if the axle was in line with the fork movement trajectory? (Less binding)

kusa (Aug 2, 2017 at 4:53)
No. Look back into articles, there was some really great coverage about offset, cornering, and overall why it is so important.

iiman (Aug 2, 2017 at 5:09)
@kusa: I think he talks about using the same offset, but all in the crowns
and @kramz: that wouldn't work, cause you need the bottom of lower legs free tp attach internals and knobs

groghunter (Aug 2, 2017 at 7:35)
@Kramz: I believe that's an elastomer fork with no damping. whole different world when you have to fix multiple shafts & such inside the fork legs to provide an air spring & a damper.

bkm303 (Aug 2, 2017 at 10:42)
@Kramz you're right that offset is offset, regardless of whether it happens at the crown or the dropouts. But my guess is putting the dropouts directly in-line with the stanchions obstructs bolt/dial/valve access at the bottom of the lowers and would increase axle-to-crown height. You'd have to take that height out of the crown, which would then cause interference issues with downtubes.

bat-fastard (Aug 2, 2017 at 5:04)
no tapered stanchions and would hope they still stay with a ti coil as its way plusher than air.