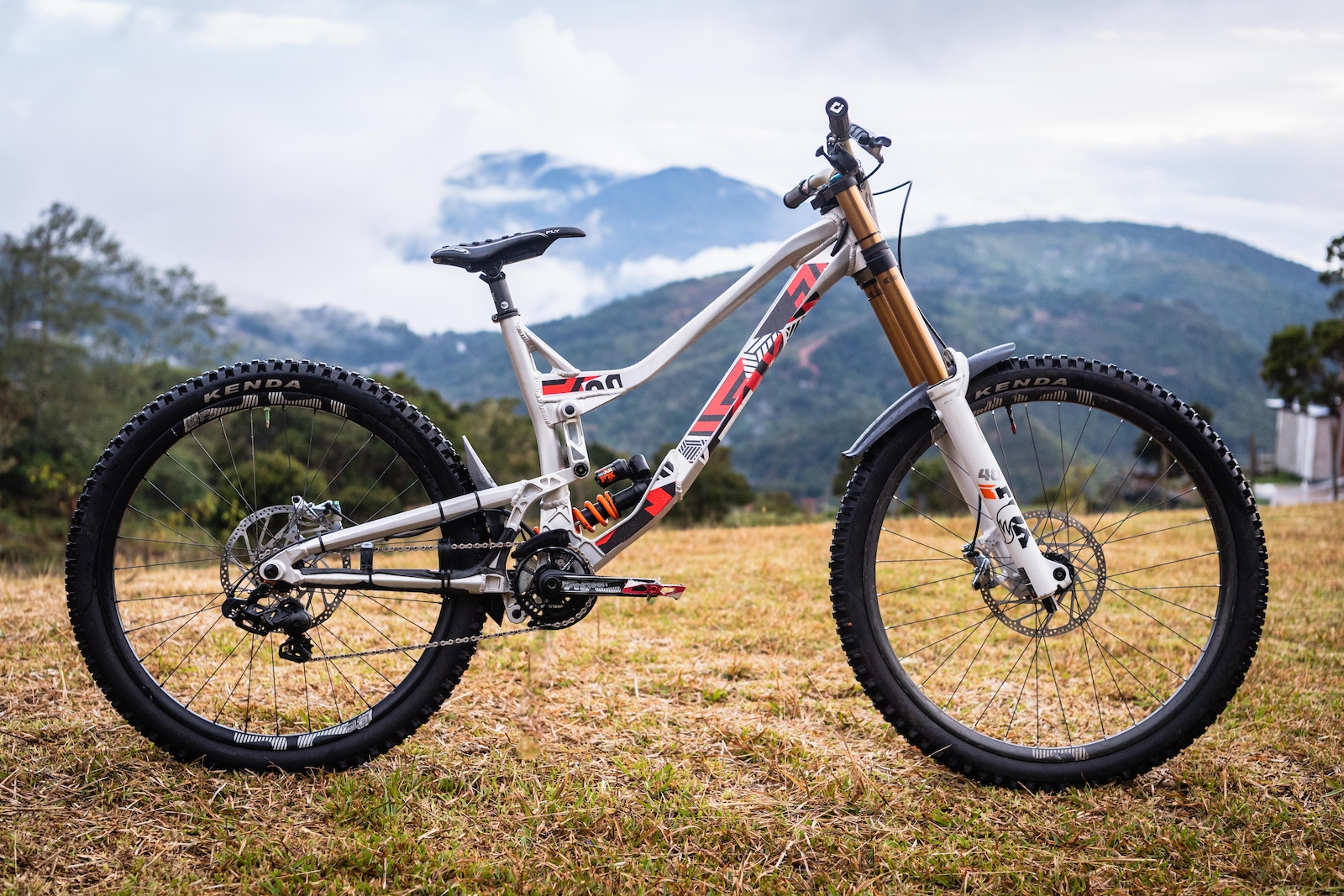 Neko Mulally has been riding a prototype Intense Factory Racing bike since the beginning of the 2020 WC season. Last year Neko and Aaron Gwin both raced the identically sized frames, but for this year Neko has his own custom size that is a little larger than Aaron's. The bike features a JS Tuned suspension system which is Intense's version of VPP, using a concentric bottom bracket pivot to keep a low center of mass. 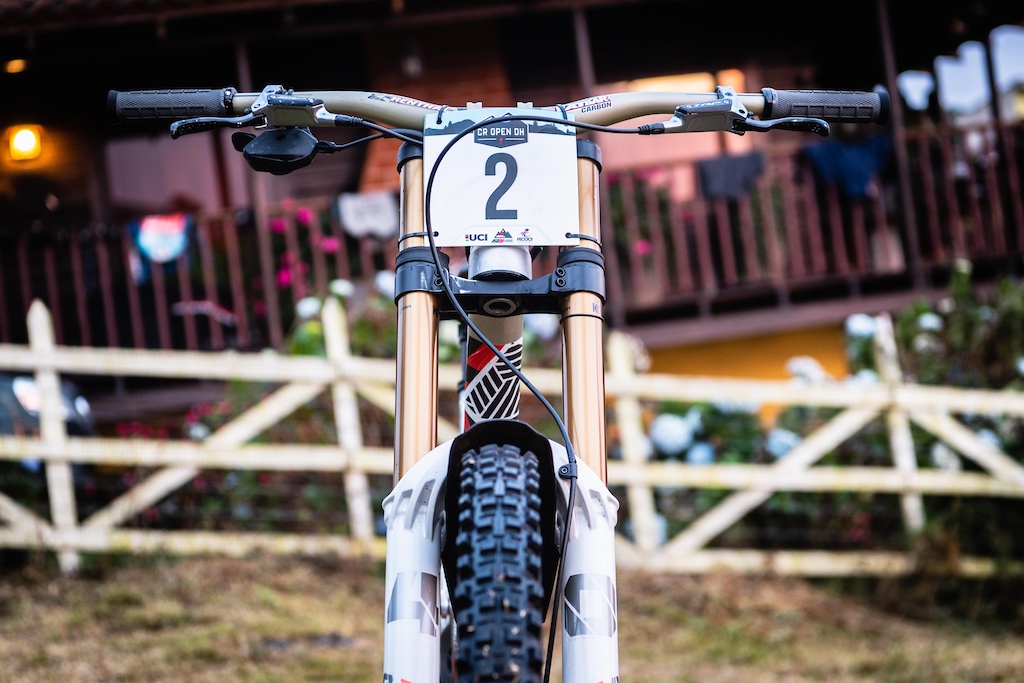 Race plates for the Costa Rican Open of DH were based on UCI World rankings. 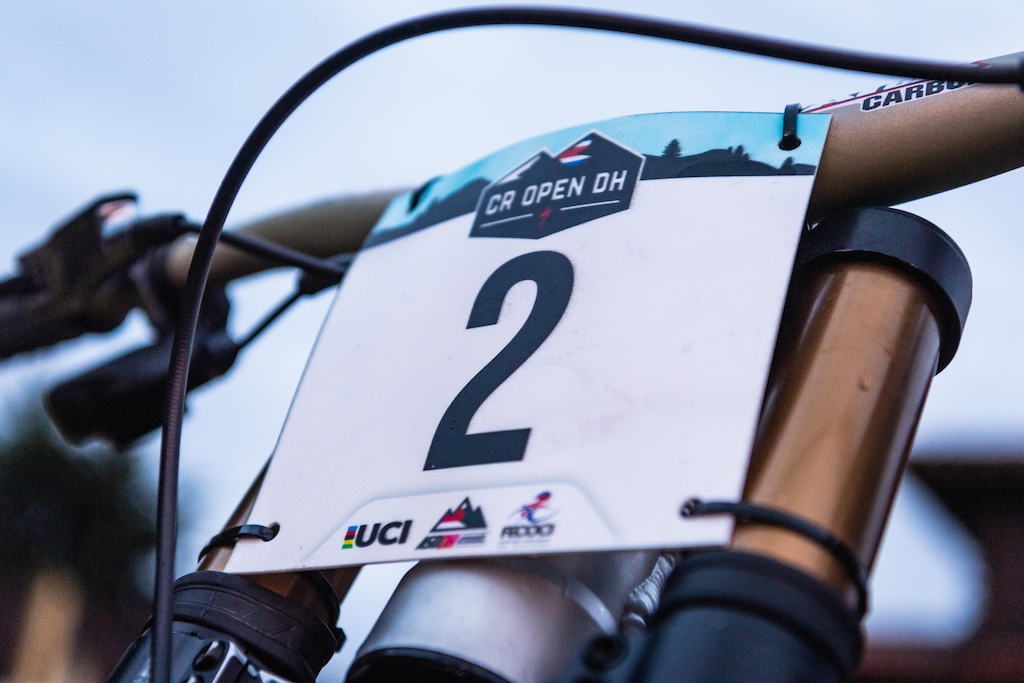 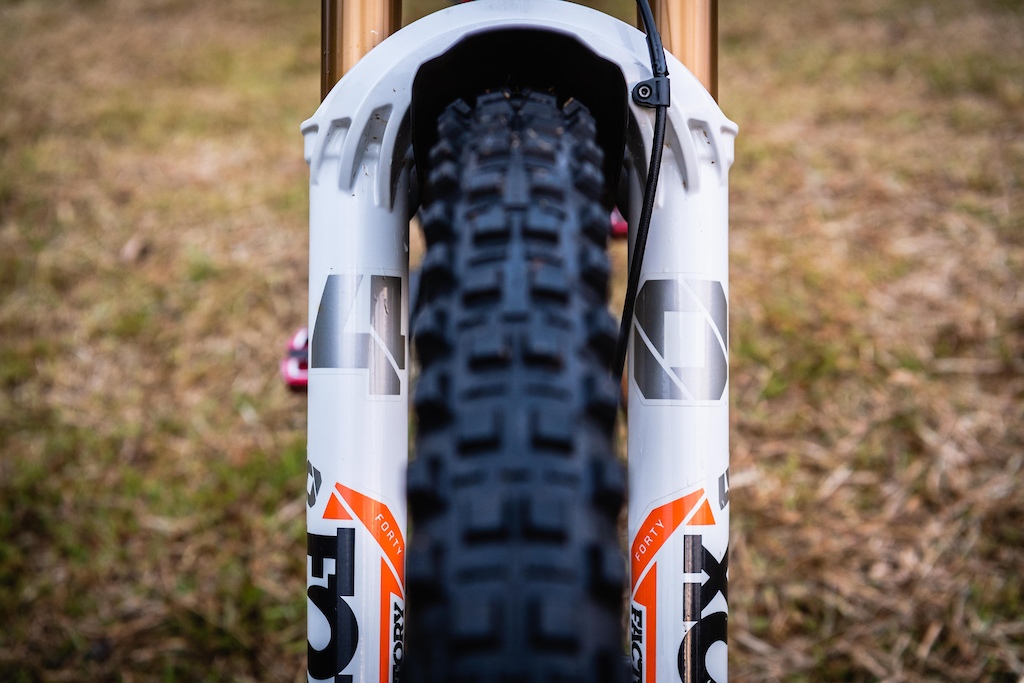 Fox handles the suspension duties with a 40 up front. 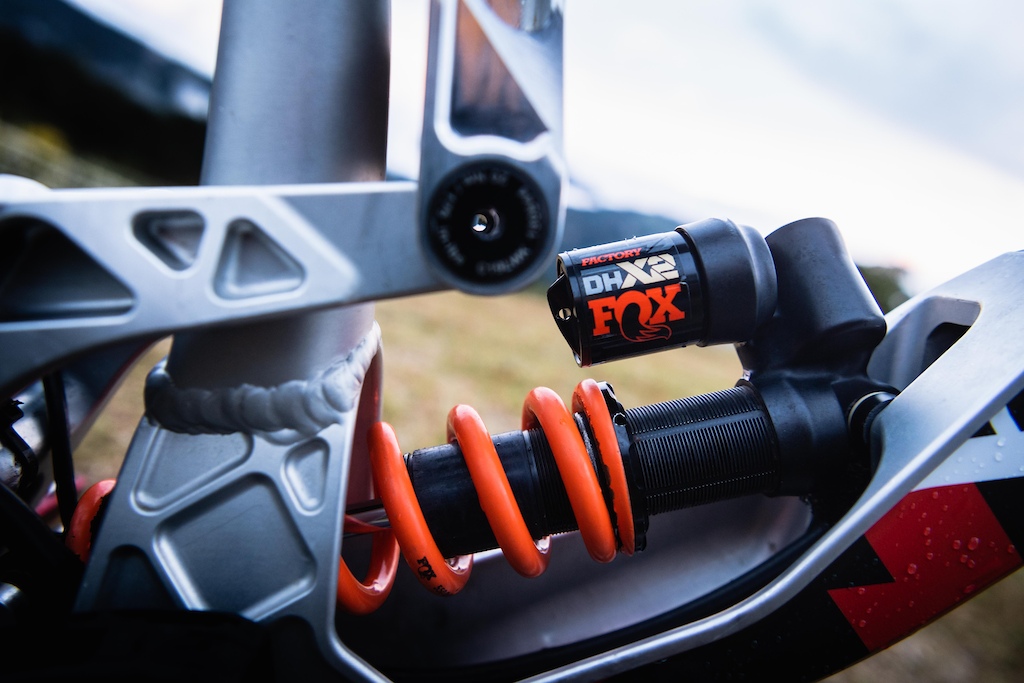 A DHX2 Coil in the rear. 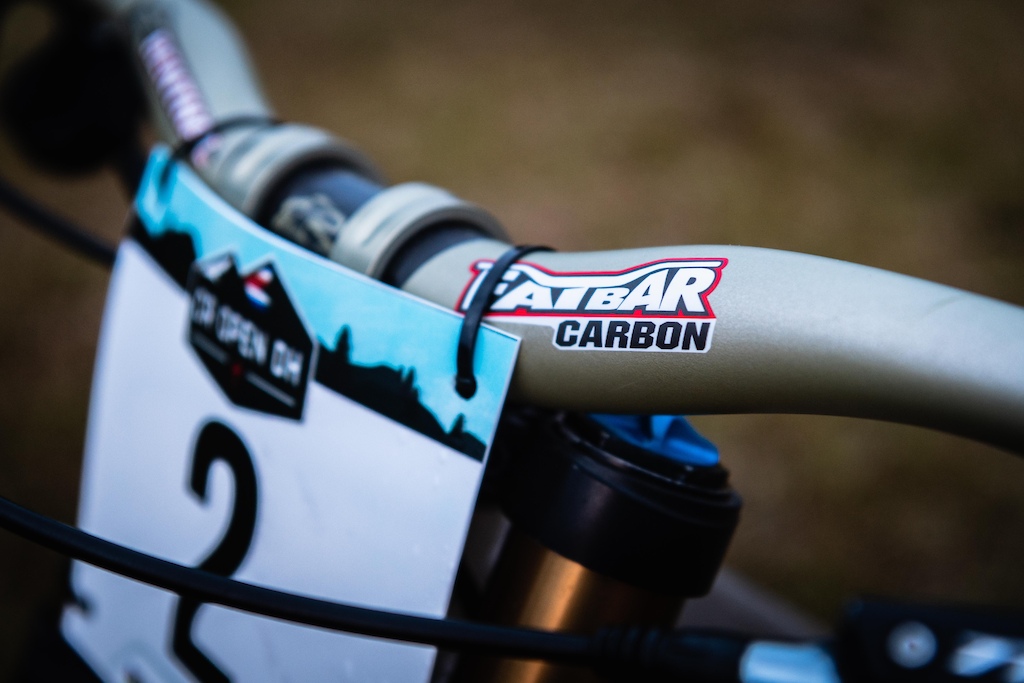 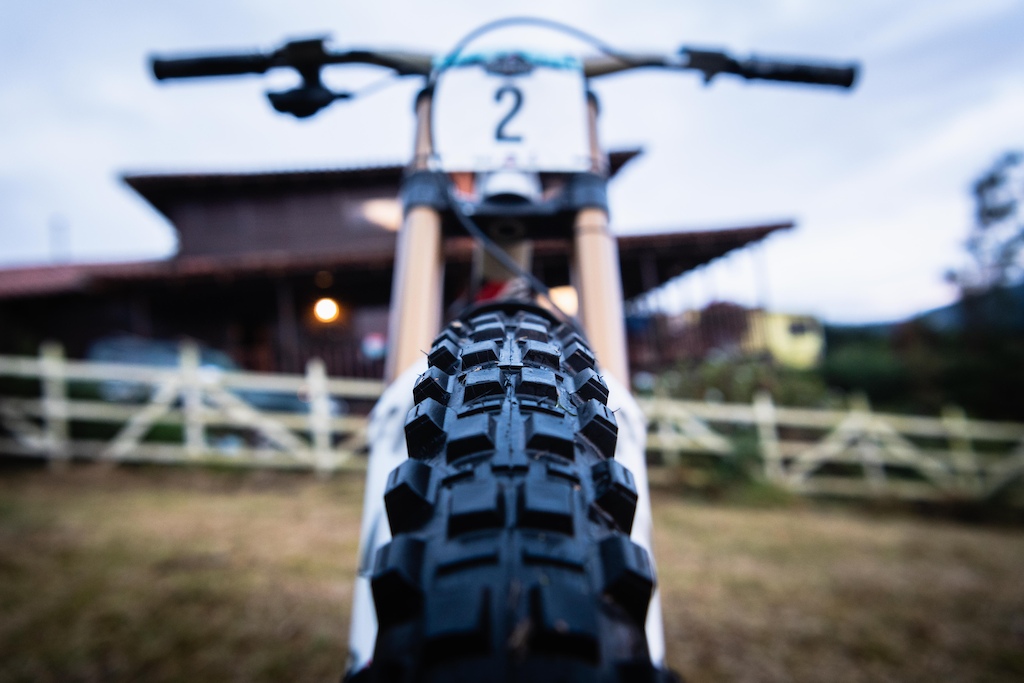 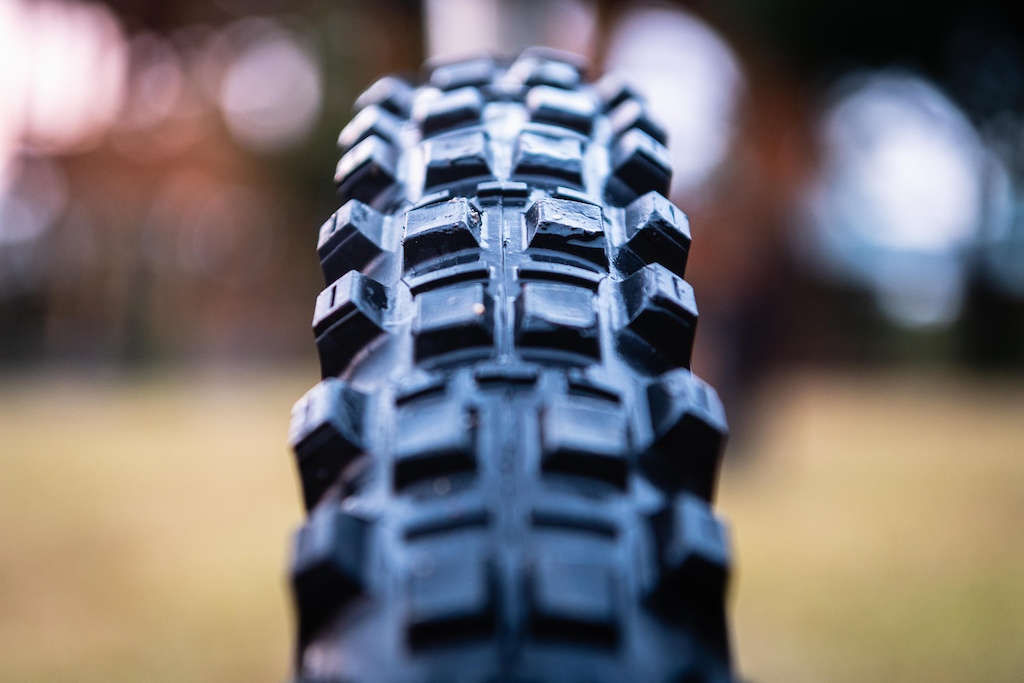 Center cut tires for the mud on Kenda Gran Mudda's. Less rolling resistance and more predictability in the wet conditions on roots and rock were among the reasons for the switch from a non-cut tire. 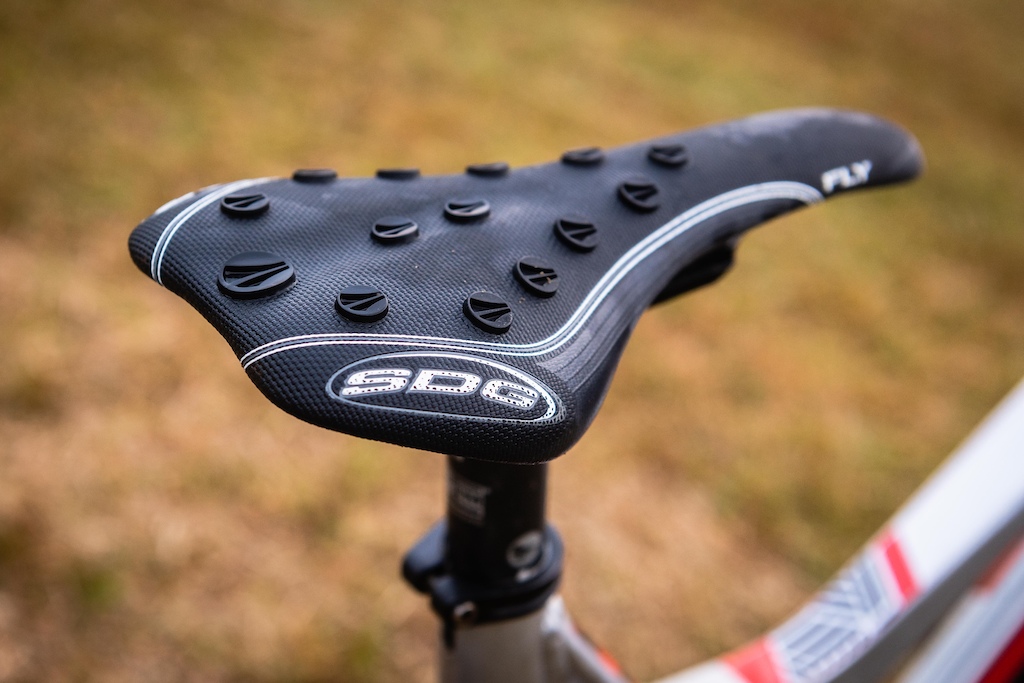 SDG covers Neko's saddle with the I-Fly Storm for muddy conditions. The knobs on the seat are to add grip when sitting and pulling a tear-off/roll-off. 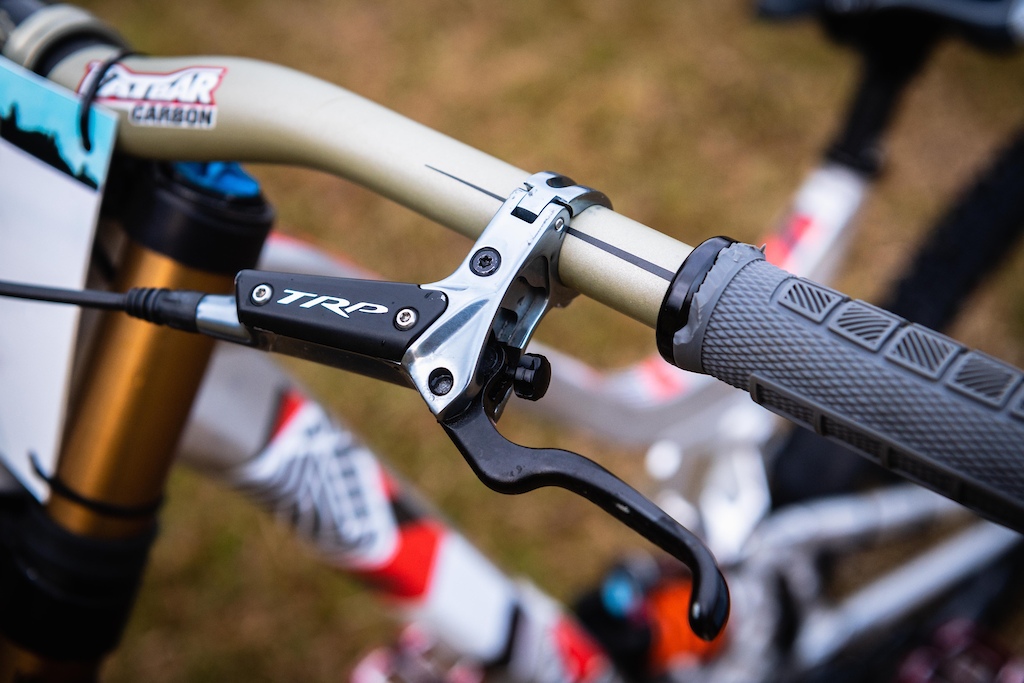 TRP supplying the braking needs with the EVO DH. 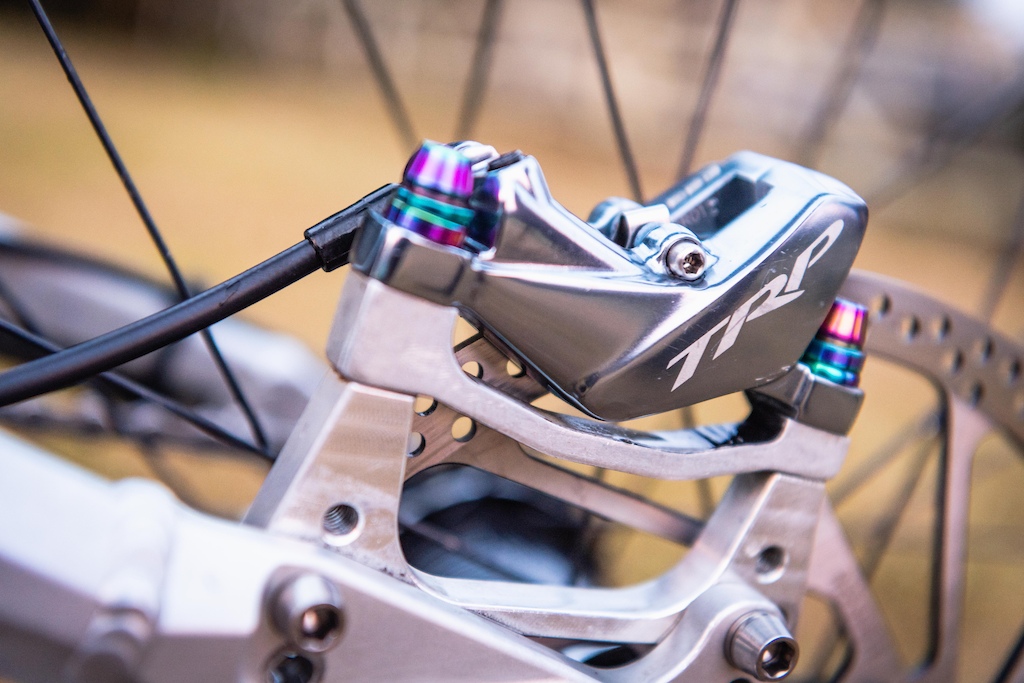 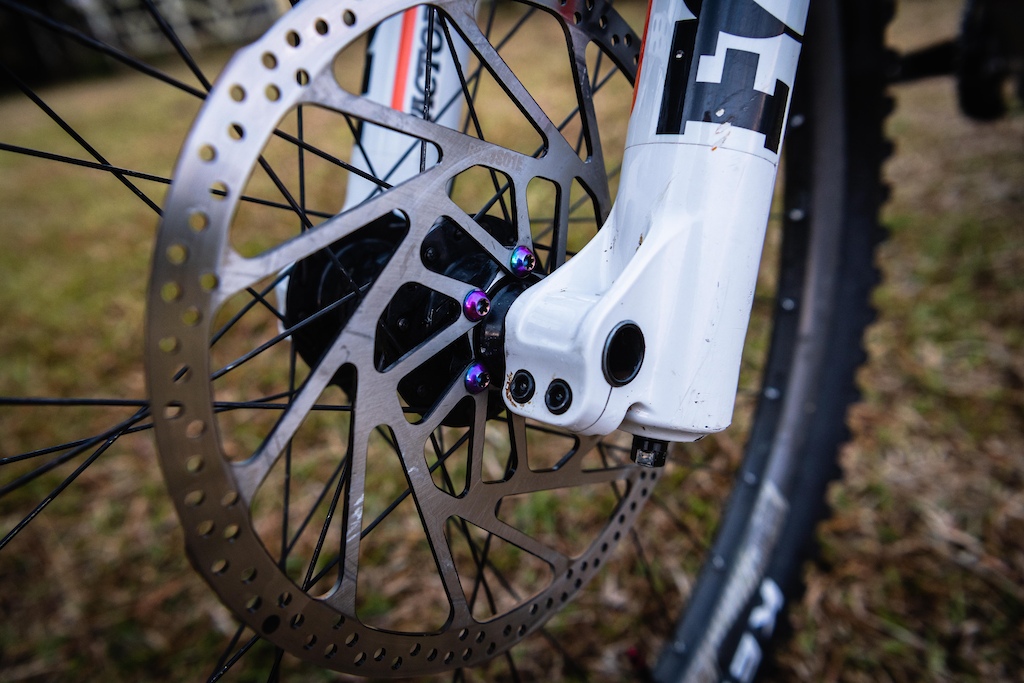 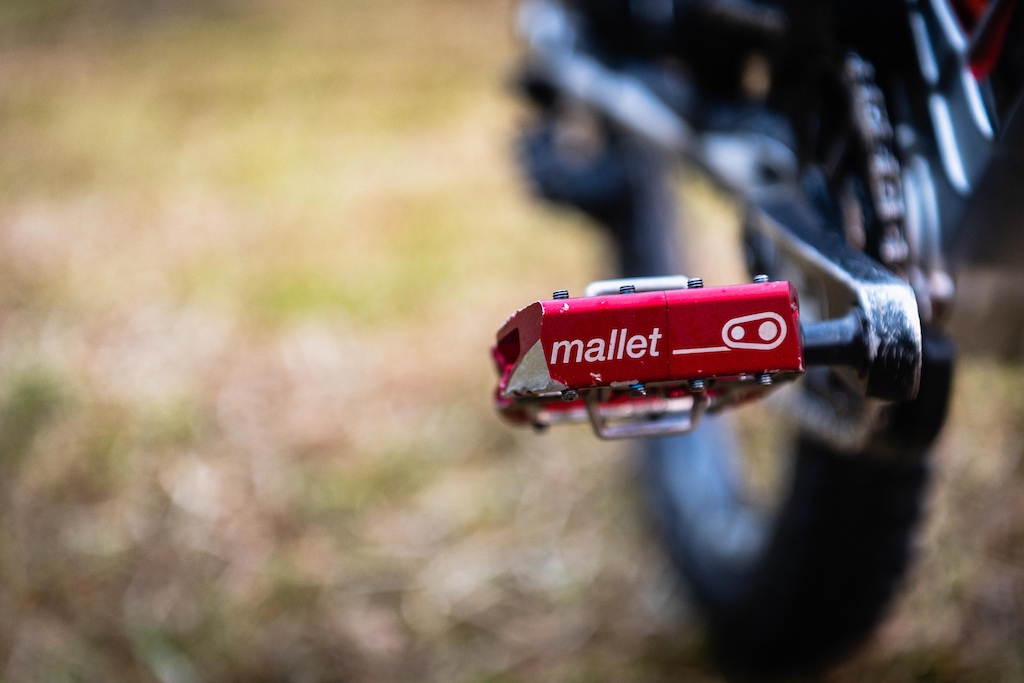 Crankbrothers' Mallet DH are a staple on Neko's rig. 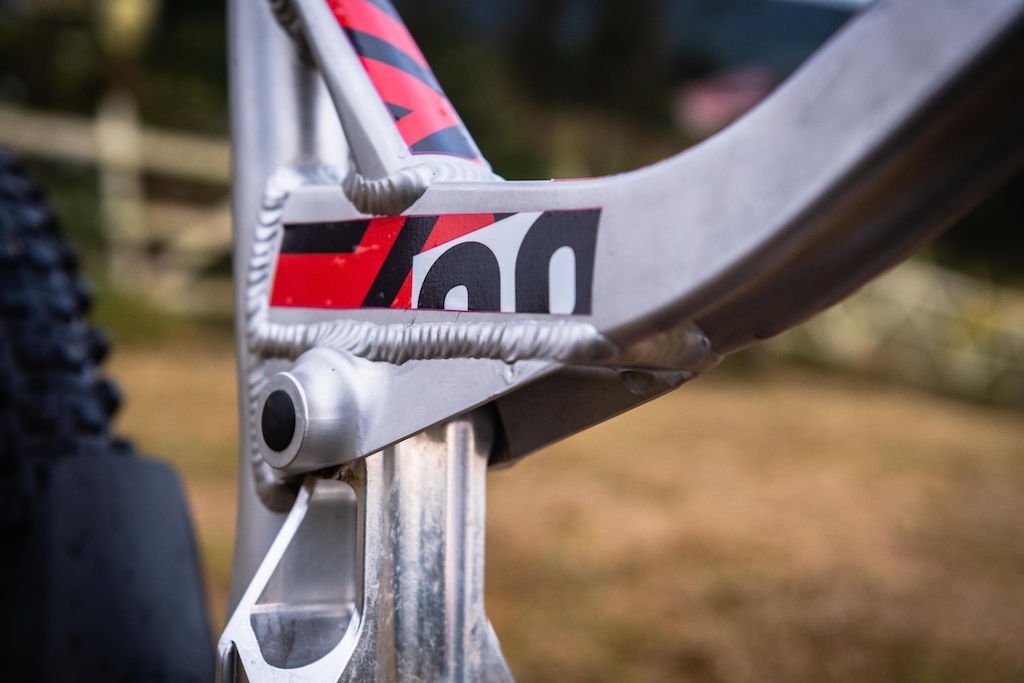 This bike is a hand-welded prototype, made by Intense founder Jeff Steeber for the Intense Factory Racing Team. This is the only bike of this size, custom for Neko, in existence. 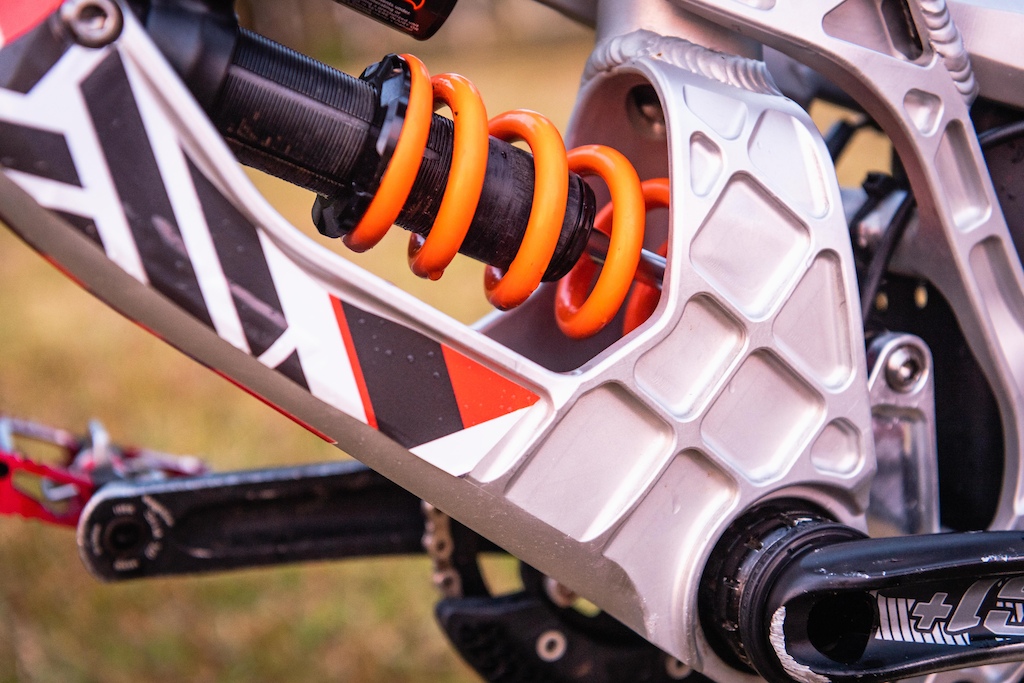 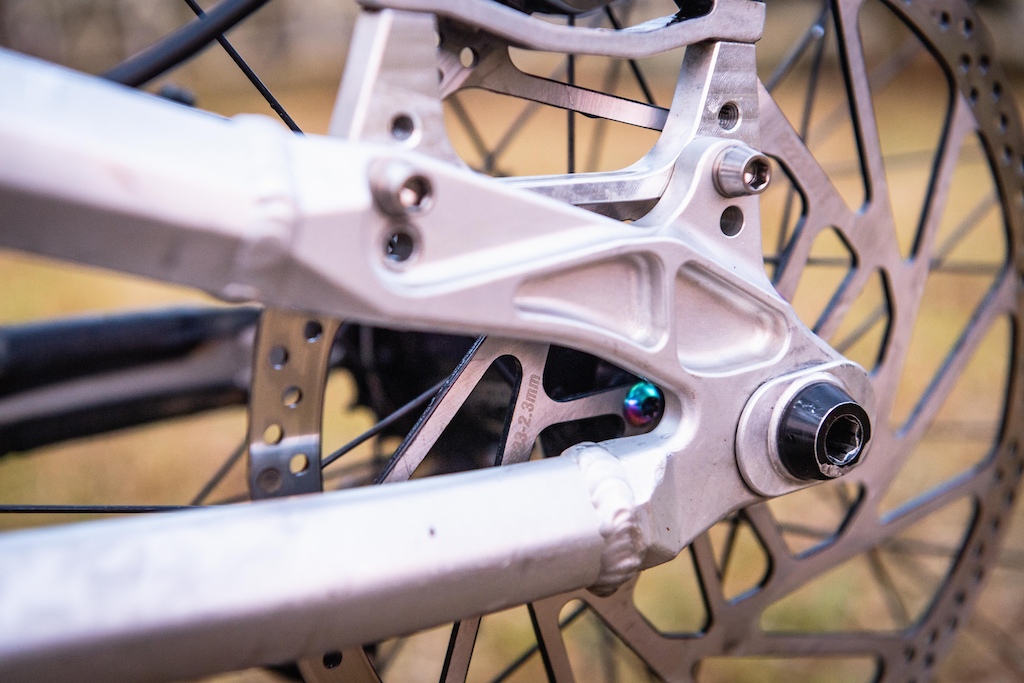 The rear axle has a flip-chip, allowing CS length to be adjusted in 5mm increments from 455 to 465mm. 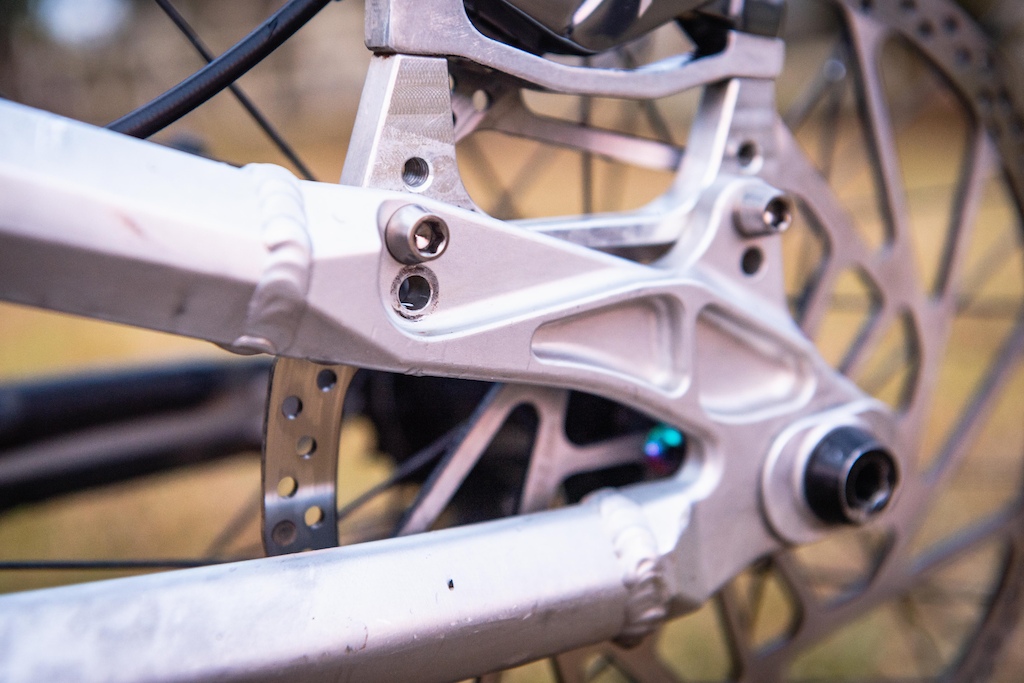 The brake mount position can be adjusted to work with any of the CS options. 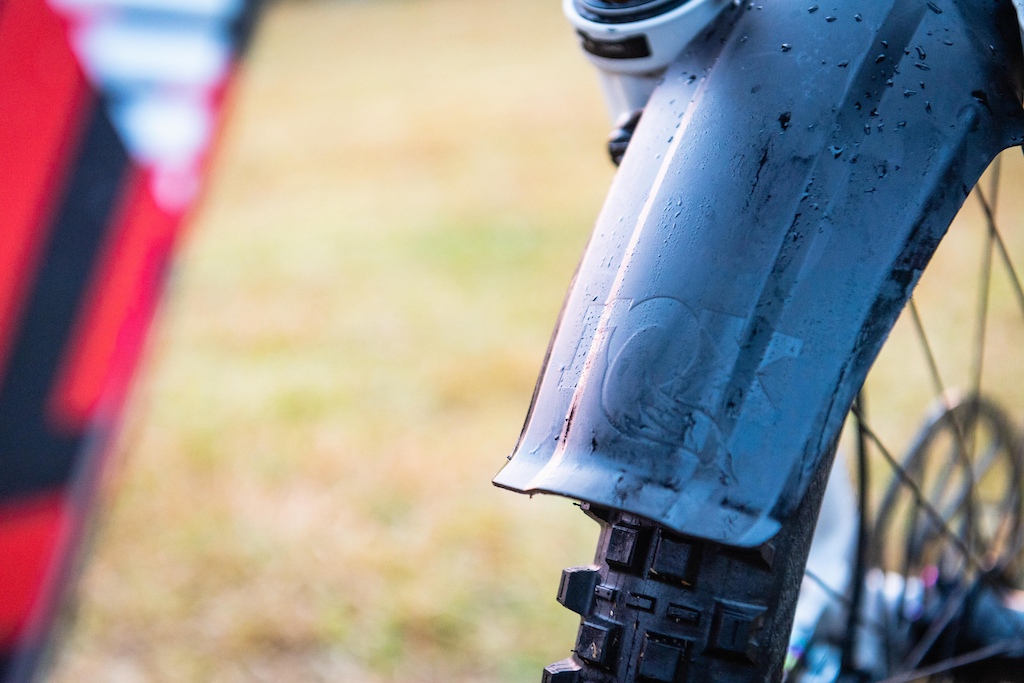 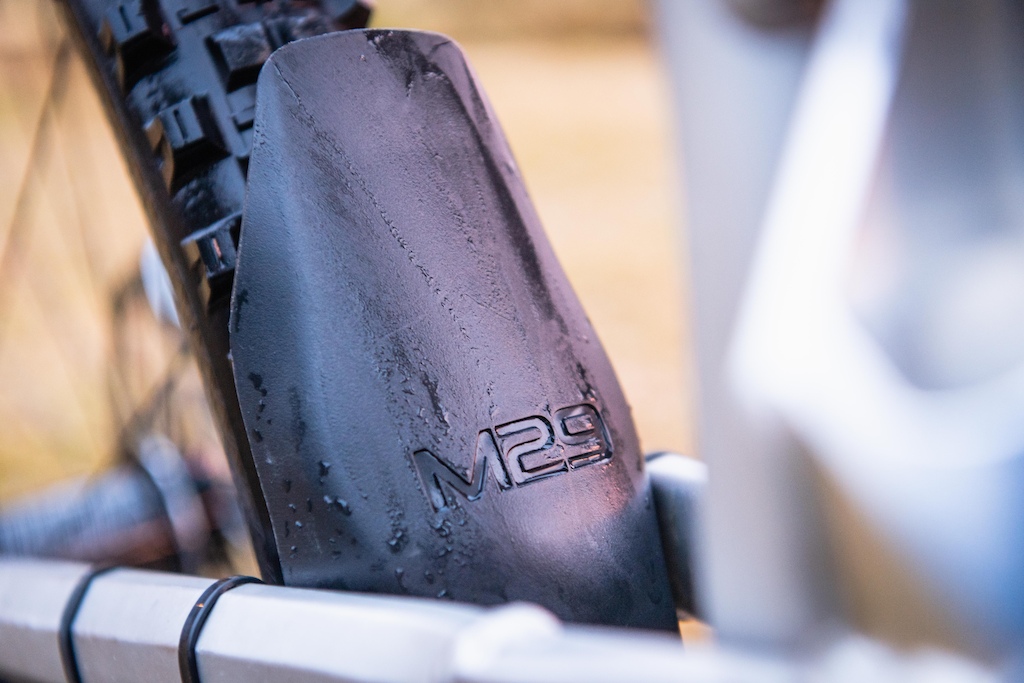 Front fender installed and ready for the rain and mud in Costa Rica.

Go Neko and good luck to everyone!!!

Upduro (Apr 25, 2021 at 11:26)
Best bet is to get them to a fence, like tonkatruck, who will estimate the value, cut up the image set into singles and then sell them to different editors.

nickmalysh (Apr 25, 2021 at 10:39)
What is the difference with previous post about same prototype from month ago?

thenotoriousmic (Apr 26, 2021 at 7:09)
Agreed Intense fell off as soon as they moved to plastic and every now and then they remind us of what they’re really capable of doing with these prototypes. Shame.

tacklingdummy (Apr 25, 2021 at 13:24)
Digging that rear axle flip chip. That coupled with a high/low flip chip for geo should be on all frames. Versatility to run a few different configurations.

Snowytrail (Apr 25, 2021 at 16:33)
Seat tube does not connect to the down tube in front of the BB so I think no. It also isn't "straight" which I believe was one of the parameters.

Bobadeebob (Apr 25, 2021 at 9:58)
Nice to see a steep seat angle for an efficient seated climbing position

lucb-jasmath (Apr 26, 2021 at 4:24)
Intense's top 2 athletes are now not riding the 10000$US full carbon M29... that bike is certainly not as good as it was pretended to be. Gwin and Mulally prefer a good old retro-look aluminum forged bike. Interesting to see how companies return to aluminum frames after claiming that carbon was so much better (Trek, Specialized, Mondraker).

conoat (Apr 26, 2021 at 8:00)
@lucb-jasmath did your mom have any kids that lived? have you not heard of prototypes? the mind boggles how you have survived long enought to be here today to make this comment.

the real pro move though, is a small bit of beeswax between the cup and cone to let them slide into proper alignment.

whistlersquid (Apr 26, 2021 at 9:56)
Dude, these are prototype custom bikes, once the alloy geo and specs are agreed upon all intense factory riders then they will put all the details into a carbon bike...Alloy is a tonne easier to work with hands on in house than carbon.

lucb-jasmath (Apr 27, 2021 at 4:01)
@conoat: Prototype or not, the fact is their top 2 racers choose not to ride the M29. They ultimately choose so because they don't believe the M29 can lead them to success (perhaps, they haven't been successful on it). When Gwin signed with Intense in 2019, he quickly turned away the M29 and forced the brand to do a prototype bike just for him (can you still even call it a prototype when it's been two seasons he's riding it). Same applies for Mulally now. It's just funny how Intense claims the M29 is the «best downhill bike ever made», but their own racing athletes rejects it (except for rookie Seth Sherlock). Fact is, the M29 is obviously not up to the task.

lucb-jasmath (Apr 26, 2021 at 4:34)
Intense's website mentions "the M29 is our flagship bike and the best downhill bike ever made"... Well, not quite if your top 2 downhill athletes choose to not riding it.

anotherbikerguy (Apr 25, 2021 at 10:26)
@jaame: Yes, it's necessary when using an adapter, because the bolt head is not parallel to the caliper's mounting tabs and therefore requires the cup & cone washers. But since the whole brake mount seems to be custom, it is somewhat odd that they're using an adapter. Seems like it would be just as easy to make a brake mount that does not require an adapter. I don't imagine Neko's ever going to run a 180mm rear rotor on his downhill bike.

Mondbiker (Apr 25, 2021 at 10:54)
@jaame: direction on them doesn´t matter and I see them under both bolts? They are there to allow the bolt heads to sit flat on the caliper when using adapter like that.

Zaeius (Apr 25, 2021 at 10:56)
@jaame: I did not realize there was a correct orientation for the cone washers. Which is the correct set up and what is the logic behind it?

R-M-R (Apr 25, 2021 at 13:15)
@anotherbikerguy: Many of the tubes and frame parts are catalog items from Asian vendors. Had Intense made custom extrusion dies, hydroforming molds, etc. for a prototype, it would cost as much as a carbon mold!

Many parts are custom, of course, and this is probably a very expensive prototyping program. Maybe a production bike will be released in aluminum and use the custom parts.

anotherbikerguy (Apr 25, 2021 at 20:51)
@hamncheez: That would make sense. You're probably right--the front rotor is 220 according to the caption, and the rear looks like it's the same size.

conoat (Apr 26, 2021 at 8:04)
@Mondbiker: @jaame there is no right or wrong. An argument can be made for aesthetics in making them the same, but they work the same in either orientation.

dthomp325 (Apr 25, 2021 at 9:07)
Shit happens when you ride rocky trails. I’ve always though it would be cool to have an iscg on both side to run a dual bash guard to better protect your frame and cranks.

nickgarrison (Apr 25, 2021 at 9:39)
Maybe he rides left foot forward so that’s actually the bottom side when he is riding.

Mondbiker (Apr 25, 2021 at 10:50)
@dthomp325: bash plates like 20inch trials bikes used seems like very obvious solution for that, they did have some drawbacks though.

stiingya (Apr 25, 2021 at 12:30)
Are we considering this an ebike/moped since normally it uses some kind of external motored device to get to the top of the mountain...?