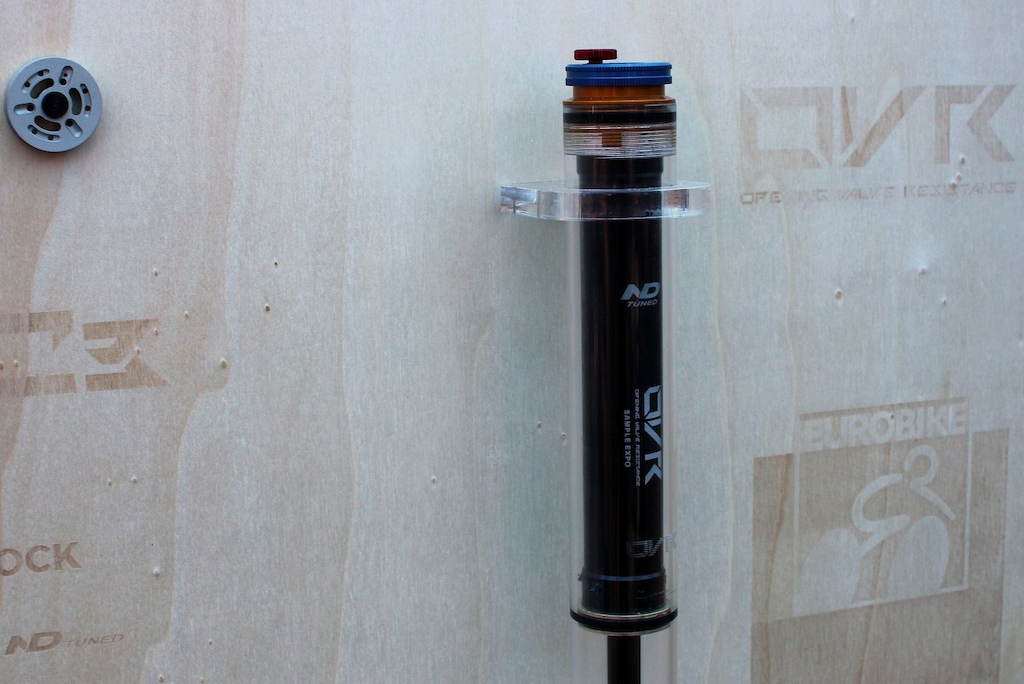 ND Tuned is a brand that takes the initials of Portuguese suspension tuner, Nuno Duarte. As well as aftermarket tuning for other brands, Nuno has started to build his own line of products.

The OVR cartridge damping system is designed as a drop in replacement for 32mm forks from Fox or RockShox. The patented, 100% pneumatic system, is said to offer similar performance as a Specialized Brain system, without the need for a lockout or remote. OVR stands for Opening Valve Resistance and prevents bobbing under load from pedaling. The 74g unit should offer around a 200g weight saving compared to a conventional oil-filled cartridge. It is also meant to be more eco-friendly as there is no oil involved and should lower maintenance intervals by nearly half. 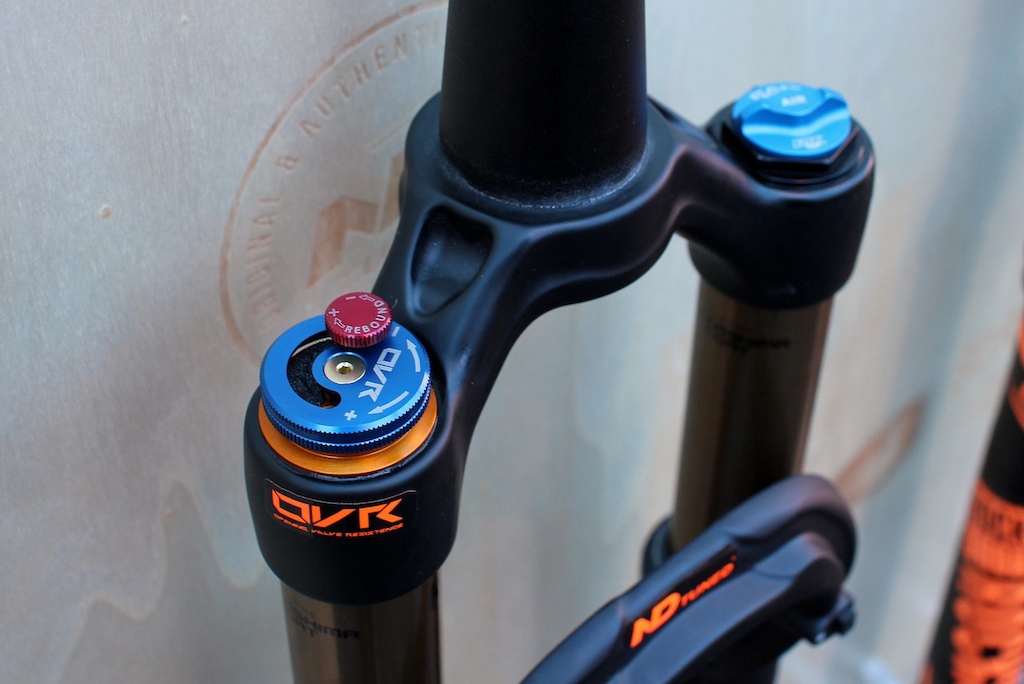 The OVR cartridge is only available for XC use but offers a big weight saving for the lightweight addicts. 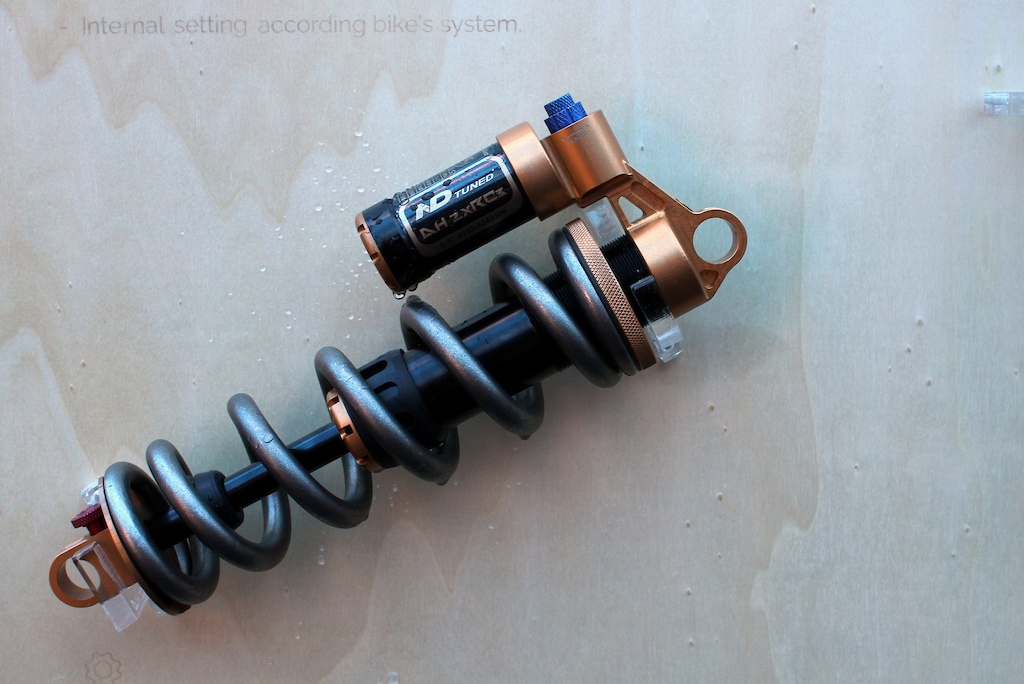 On the opposite end of the spectrum, the 2XRC3 DH shock is 100% machined and built to order to suit each rider and their bike. A coil spring is used with a plastic shim on the shock body to avoid rubbing. Low and high-speed compression can be adjusted externally as well as rebound. 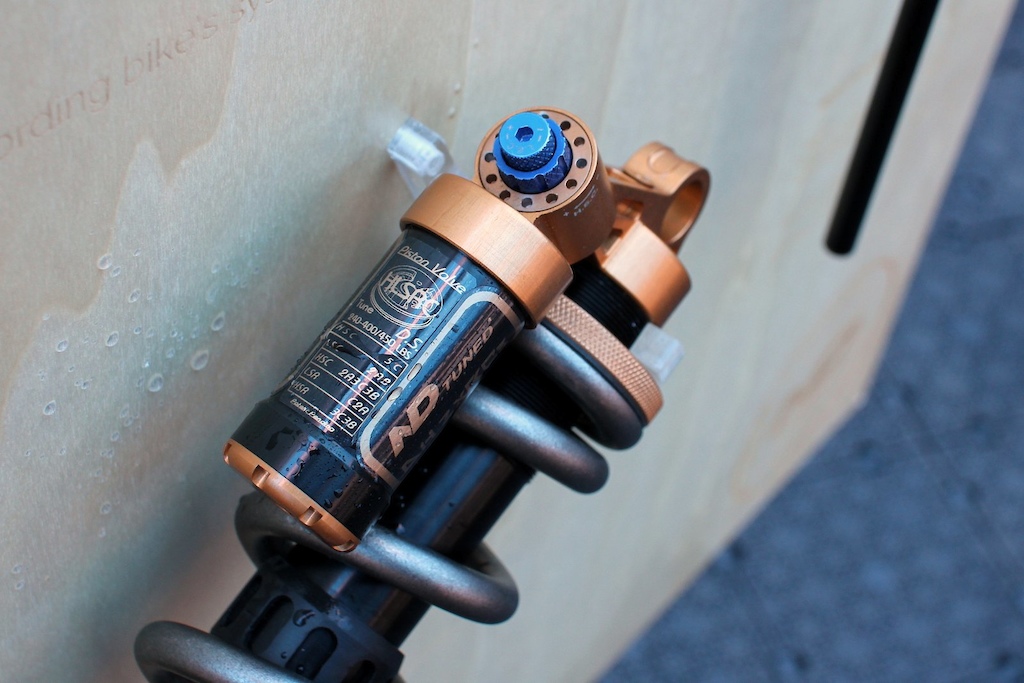 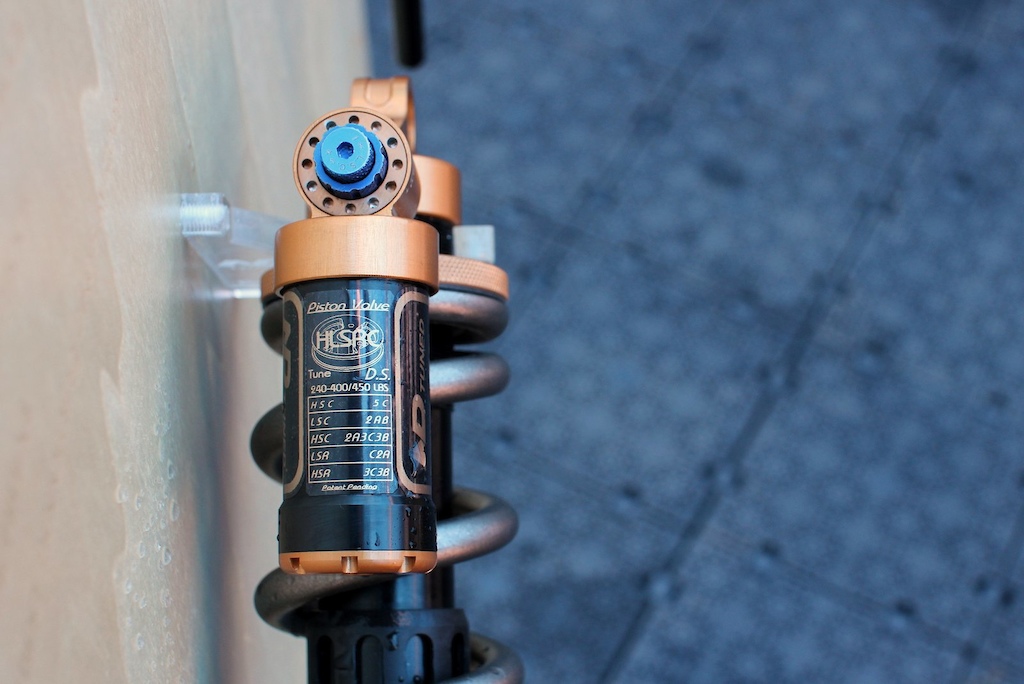 Scratch a stanchion and don't want to fork out for an entire new CSU? The ND Tuned 32mm tubes can fit either RockShox or Fox, they are hard anodized and can be pressed in at ND in Portugal or their German distributors MRC Trading. They also offer replacement steerer tubes in case you change frames and don't have enough length, or if you are a measure once, cut once kinda guy. 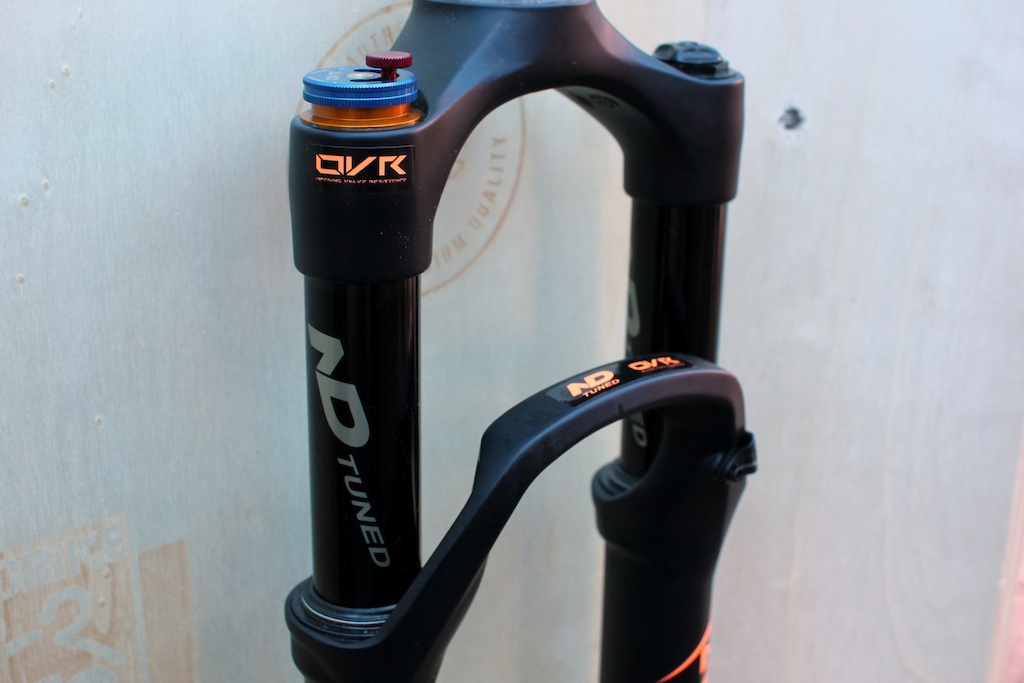 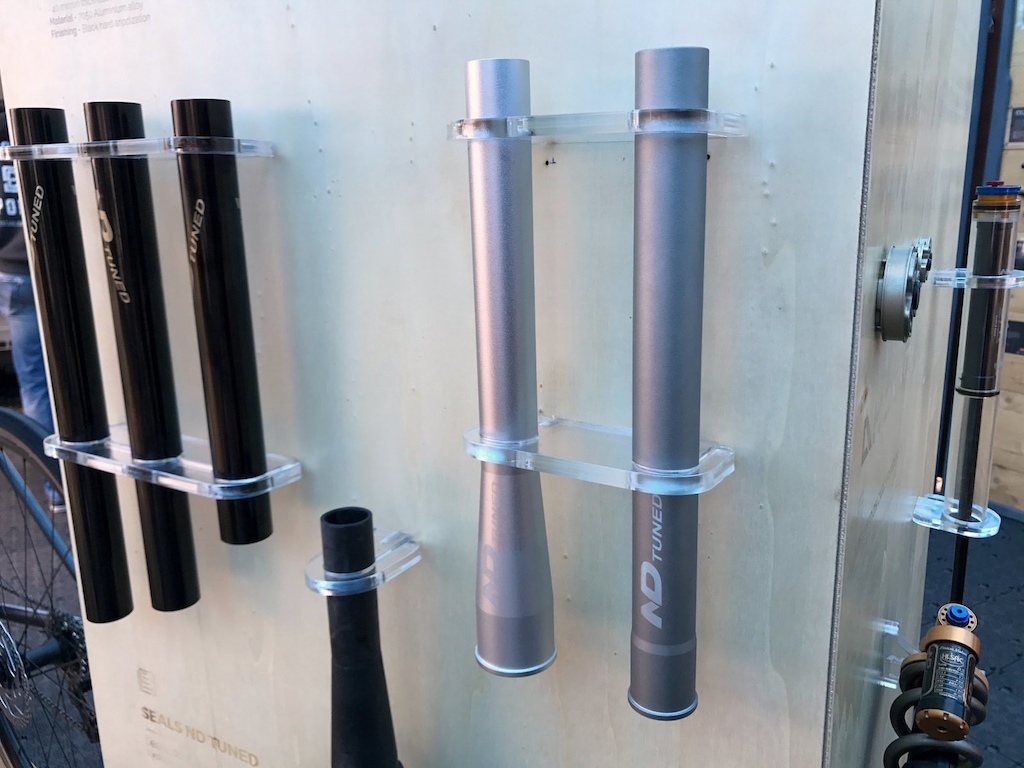 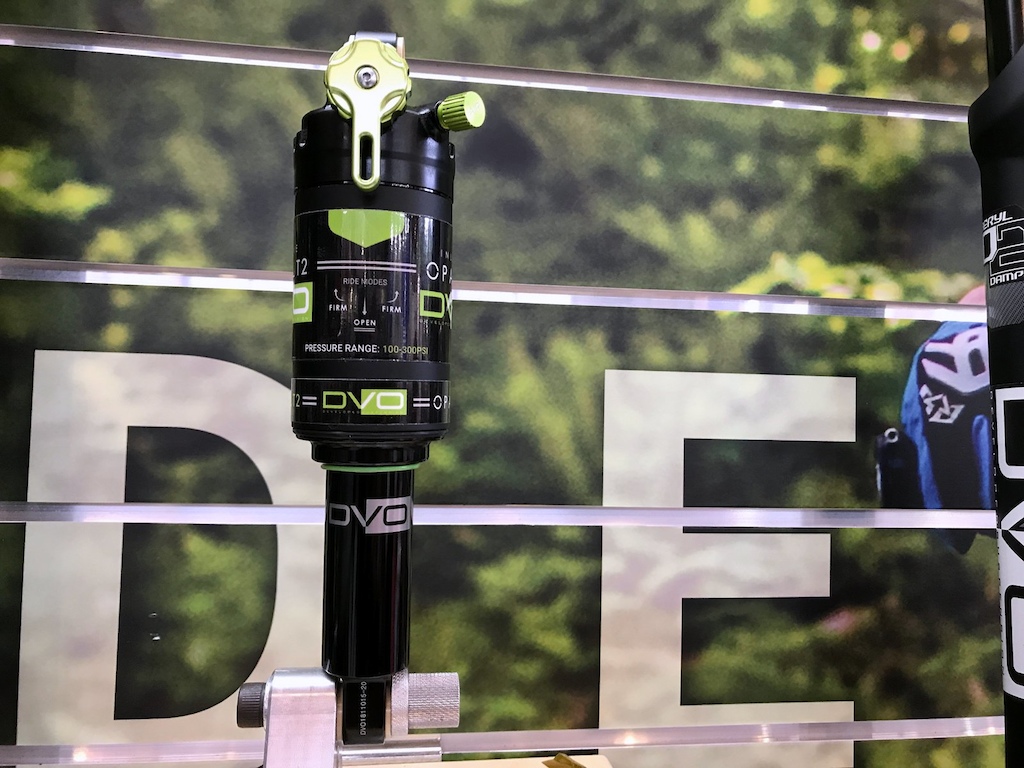 DVO has a new shock to add to their expanding suspension line. The Opal T2 takes the air can tech from its bigger brother, the piggy-backed Topaz T3, and uses the same air volume reducers to tune the ride. The compression lever flicks the shock between open and pedal mode and rebound is also externally adjustable.

The Opal is aimed at shorter travel trail and even XC bikes, coming in standard and metric sizing. Prices should be around $400 USD when it lands this fall. 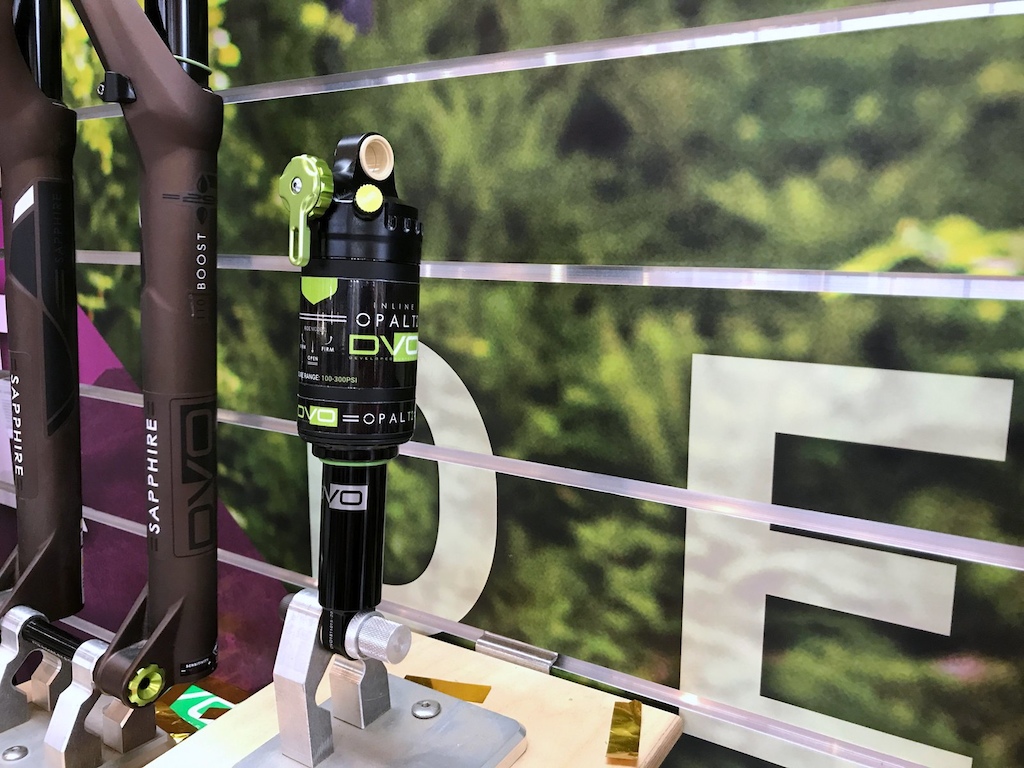 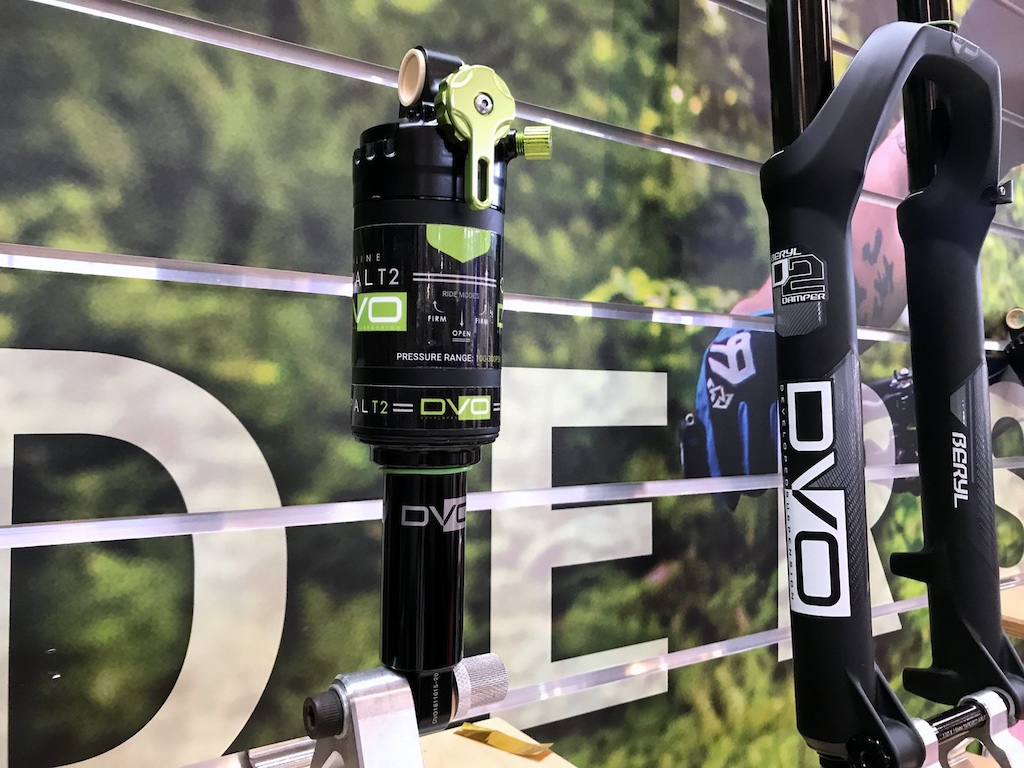 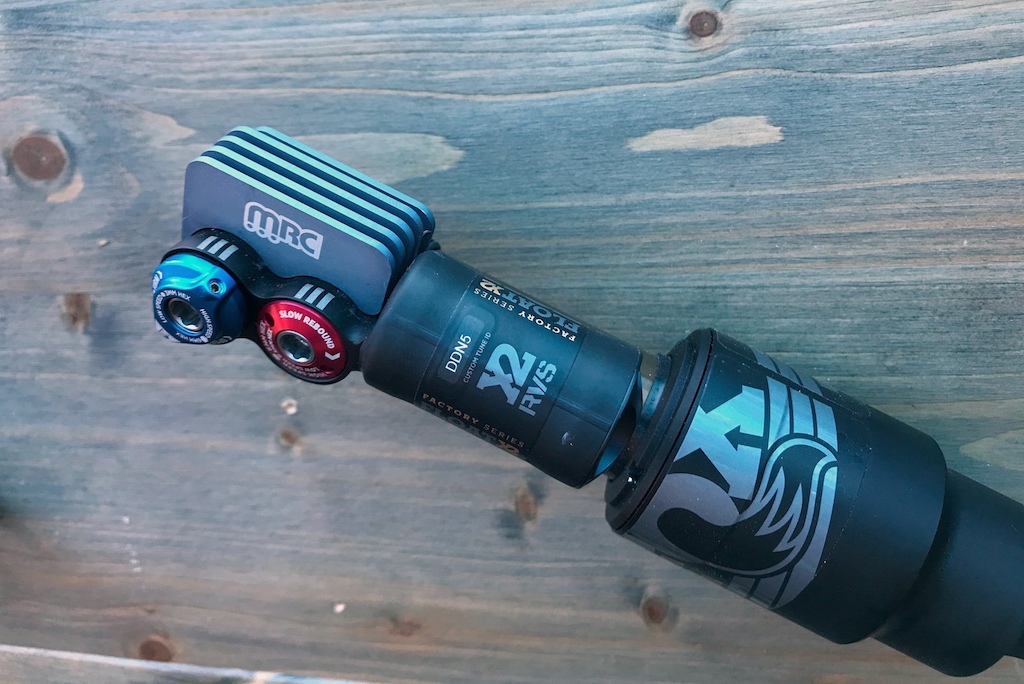 MRC Trading is a German distributor of various parts, but with a soft spot for suspension parts, tuning, and servicing. They have also started to create some of their own products. Firstly, this cooling fin, designed by Mathis Reichmann, fits Fox X2 shocks. During testing at a 27º ambient, the fins were found to reduce the shock's temperature by 13%. Whether or not this will be noticeable to the rider or not is unclear, but they look rad. They are made in Germany and are priced at €49,90. 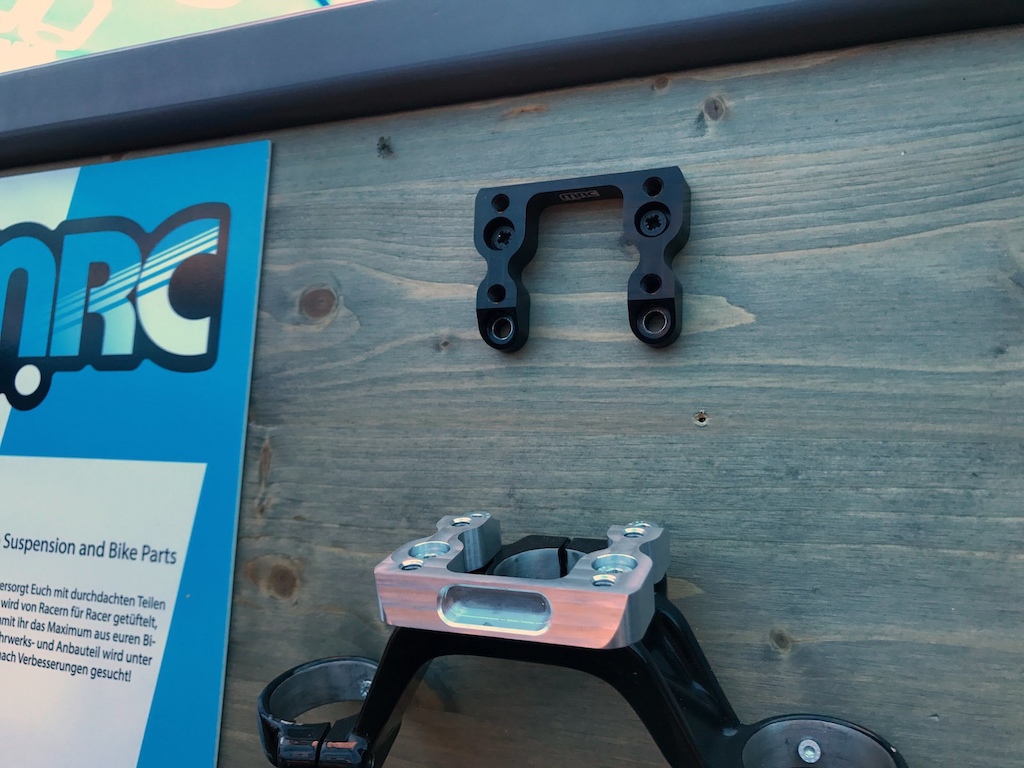 MRC's second product is this 12mm thick direct-mount stem spacer that keeps the handlebar in the same position on a horizontal plane. With an average downhill bike's head angle of 63º, raising the handlebar can have a significant impact on the bike's reach, by making it feel shorter. The 12mm spacer is used with a standard 8mm spacer to give a total 20mm rise and is bolted to the existing fork crown holes, then the stem is bolted on to the extra set of threaded holes on the spacer. The spacer weighs 43 grams and costs €52,90.

Are they available? Easy to install?

jeremiahwas (Sep 1, 2017 at 12:49)
"The fins fit on all Fox Float X2 and Fox DHX2 dampers and are simply attached by cable ties. For optimization, optionally commercially available thermal grease can be applied to the contact surfaces.
Probably the easiest way to do this is to dodge your damper!”

ChubzyWubzy (Sep 1, 2017 at 12:54)
www.mrc-trading.de/Fahrwerk/Tuning/MRC-Shock-Cooling-Fins.html
If you can operate cable ties then installation should be E Z P Z. It's interesting to see that they mention putting a thermal compound between the heatsink and shock. Of course that's just another grease to get contaminated and/or washed out, but it's pretty neat-o! Something like Arctic MX-4 should work fine.

chezotron (Sep 1, 2017 at 13:27)
Cooling fins that are supposed to dissipate heat yet held on by thin plastic? I'm thinking people will find them on the trails of Whistler or Val Di Sole...

gramboh (Sep 1, 2017 at 13:46)
@ChubzyWubzy: Use the spare MX-4 you might have lying around from aftermarket heatsinks to cool your overclocked CPU

neroleeloo (Sep 1, 2017 at 16:19)
My mud guard and hoses are all holding together with sip ties and I ride Whistler ... never had a problem, why would this be a problem? Shocks can get hot but never plastic melting hot !!? @chezotron:

It was sarcastic humor.
As was mine

gadabout-garth (Sep 2, 2017 at 0:51)
This industry is getting absurd.
It's becoming like the "audiophile" nonsense with bs snake oil products being peddled on insecure people, promising endless improvements that no one in real life can quantitively measure.

PHeller (Sep 1, 2017 at 13:36)
It's pretty rad that ND Tunes is making upgrades not just for Enduro or DH, but for the XC guys as well. I wish more tuners would do custom CSUs, as I could use black stanchion on one of my forks that never came with them. Also, I wonder how much travel the ND Tune Damper cartridge will work with. Can I run one on a 140mm 32mm Fox?

KiriS4N (Sep 2, 2017 at 6:17)
The engineer who designed the cooling fin is called Matthias Reichmann btw.

gumbytex (Sep 1, 2017 at 12:49)
Didn't know rain was in the forecast at the ND booth. Or maybe they just spritzed it to make it look more appealing, like a tomato at the grocery store.

madisob (Sep 1, 2017 at 13:01)
The Opal looks neat. I really like the Topaz so far (although it has developed a bit of squish noises earlier than I would expect it to)

WaterBear (Sep 2, 2017 at 7:49)
The ND replacement stanchions are wicked. I have an old Fox 32 with scratched stanchions sitting unused because I can't find a replacement CSU.

spunkmtb (Sep 2, 2017 at 9:53)
If you send the fork into fox they will sell you a crash replacement fork. If I remember correctly I sent in an old 32 and only pad about $500 for a new 36 fork at the crash replacement price