Having the skills is no guarantee of success, but as long as assistive technology gives you the opportunity to turn every shot into a hit, the question of whether photography is art becomes irrelevant. The appreciation of art comes when the proportion of success remains infinitely small regardless of the level of skill. 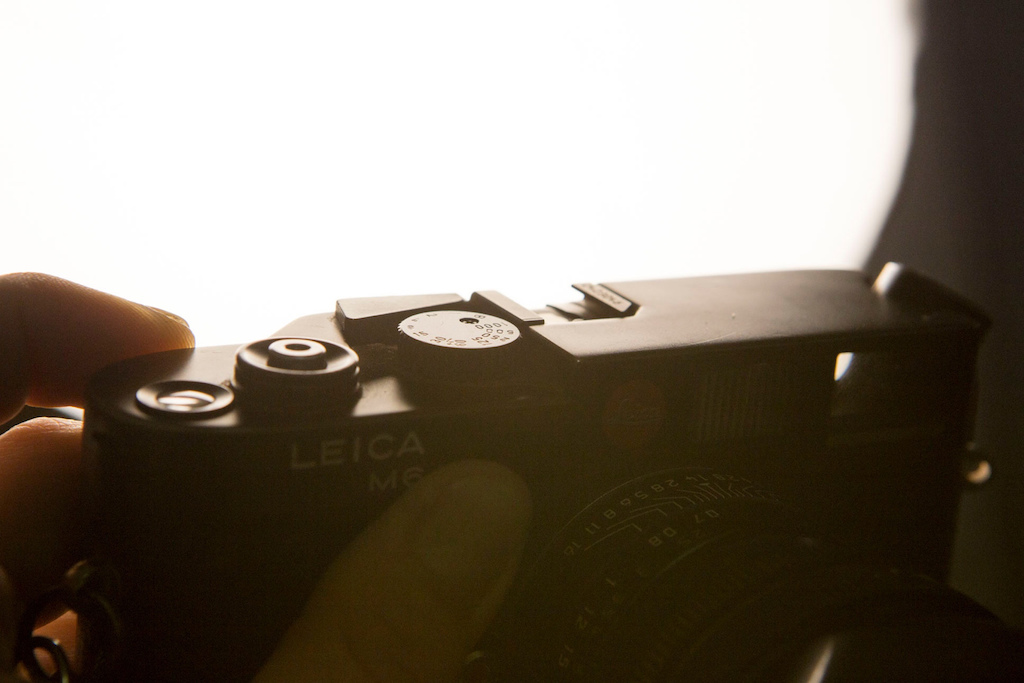 The use of the analogue Leica M6 with a 35mm fixed focal length and 36 shot film showed me, in an rather amusing way, my own personal limitations in several situations: distraction at the crucial moment, being unprepared for the shot, and over-anxiously trying to verify the shot on the display which doesn’t exist on an analogue film camera.

However, I attained true happiness when aperture and shutter speed were occasionally correct by pure chance. I learned to say without being ashamed, “That was a lucky shot.” It's not uncool to worship the God of fortune in order to avoid the film coming to the end at the decisive moment. Buttering up some shamans is worth a consideration if you want the captured image converting into a real nugget in the camera. By the way, ranting about autofocus is not cool. Messing up the focus is always your own fault. 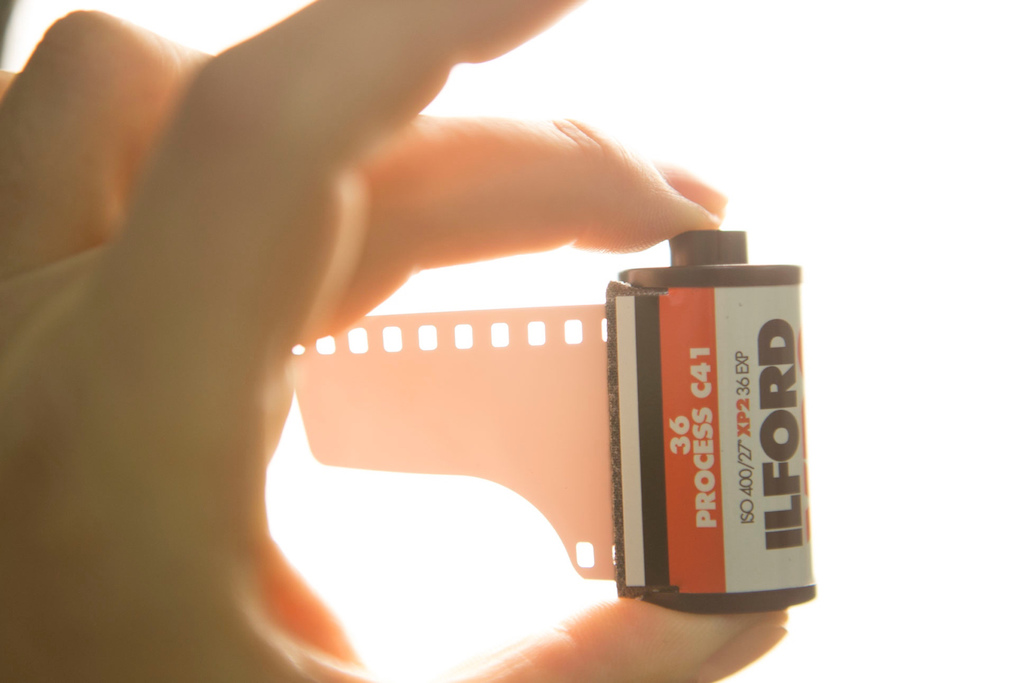 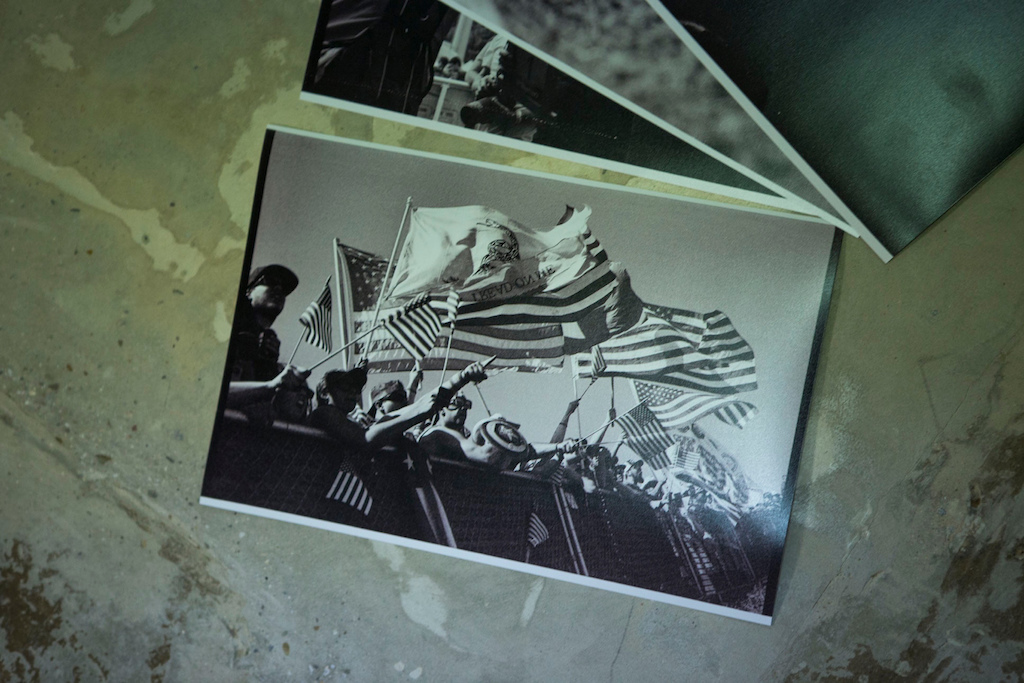 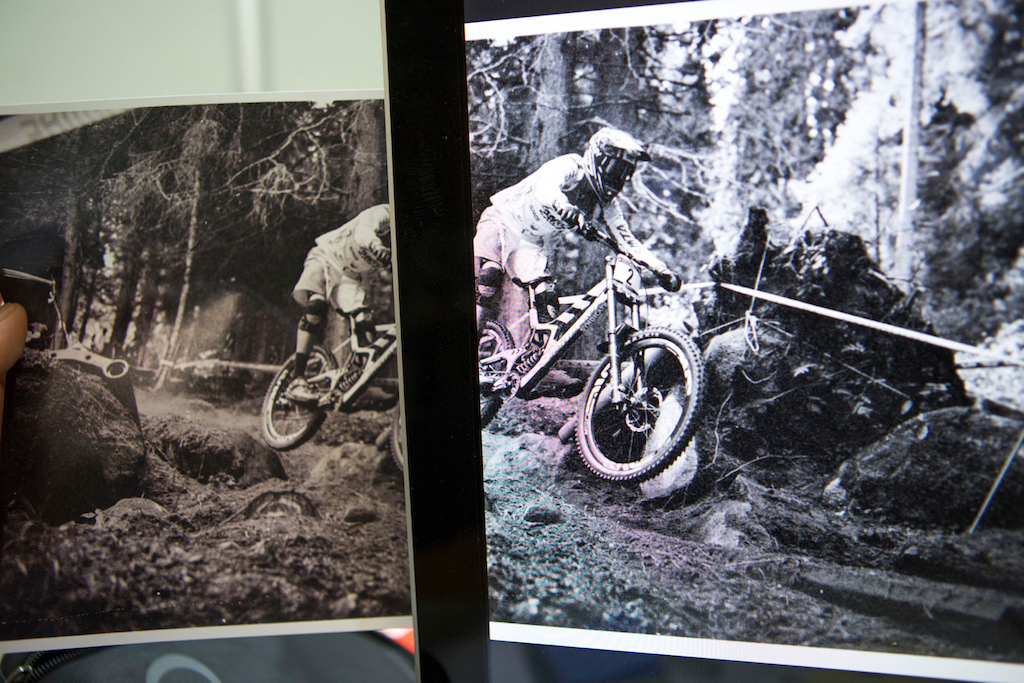 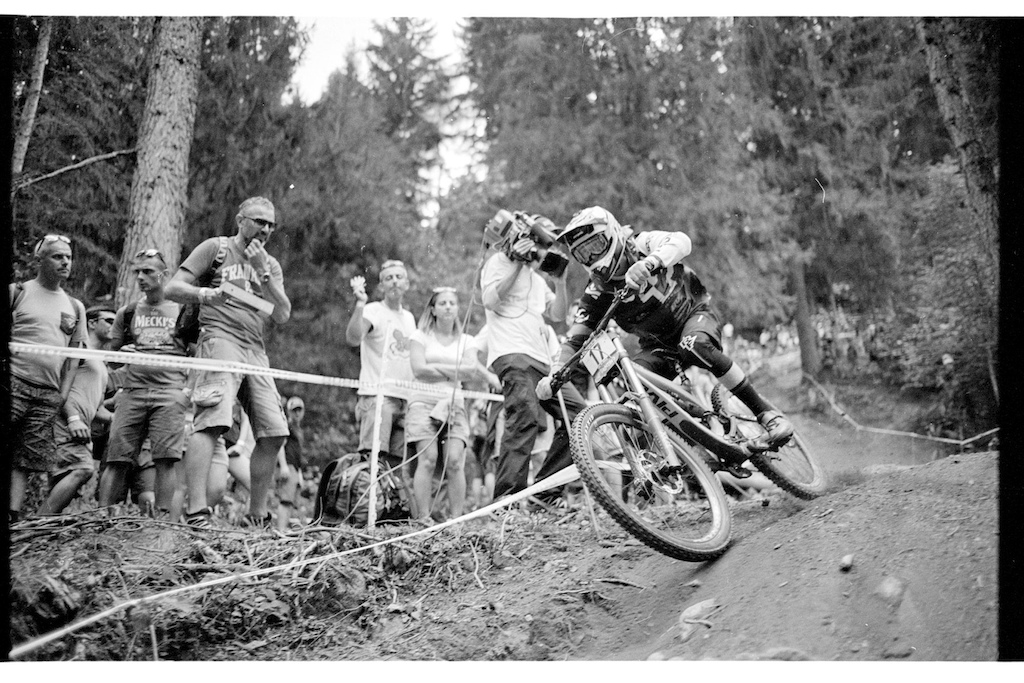 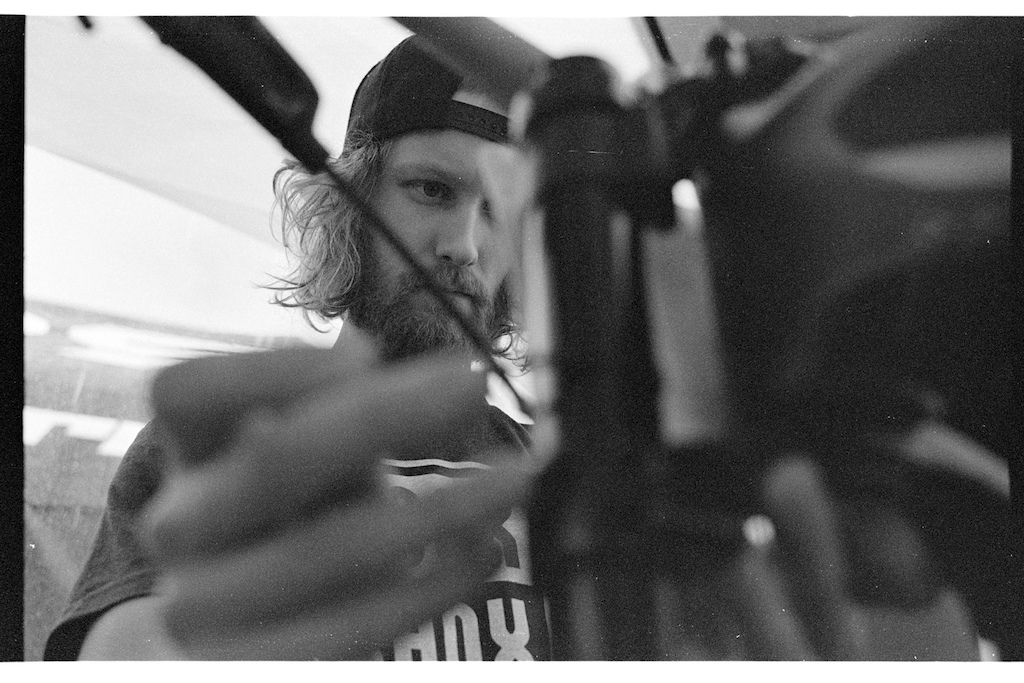 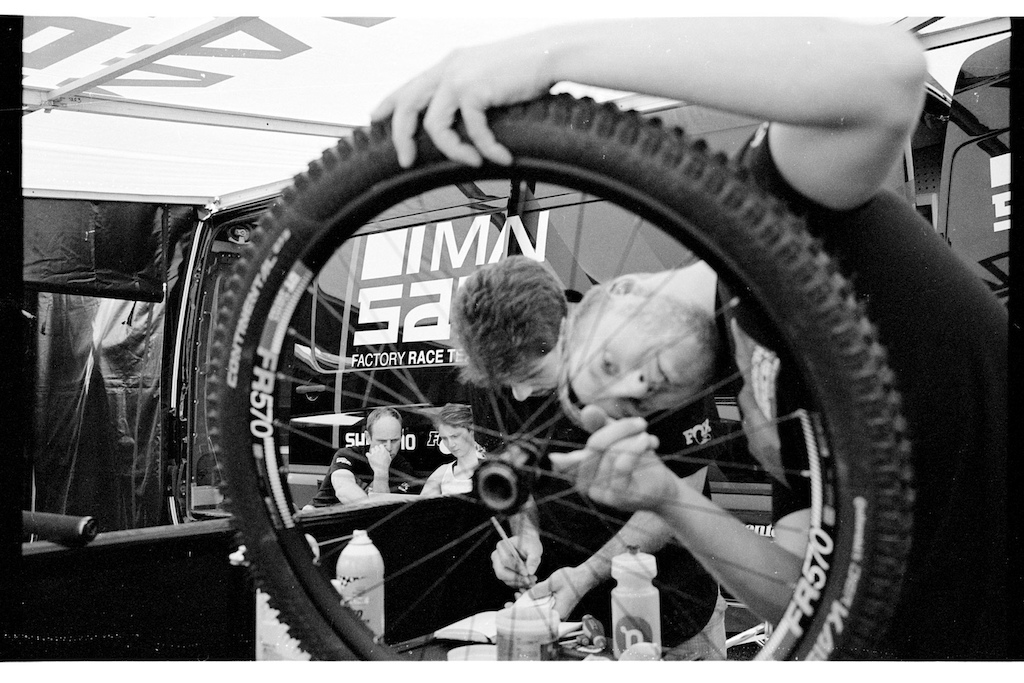 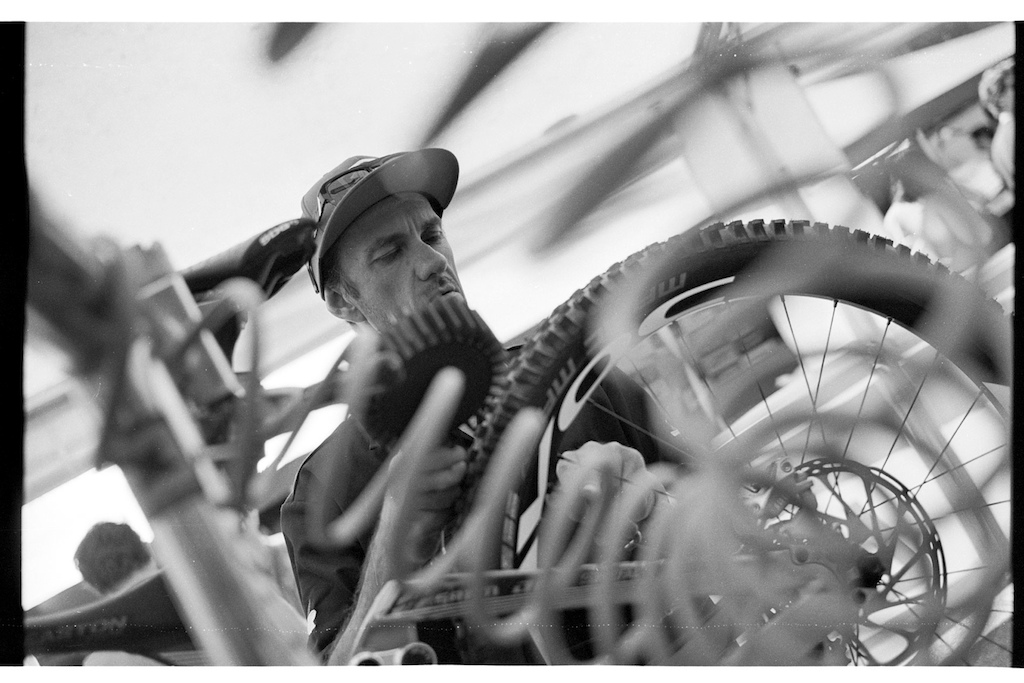 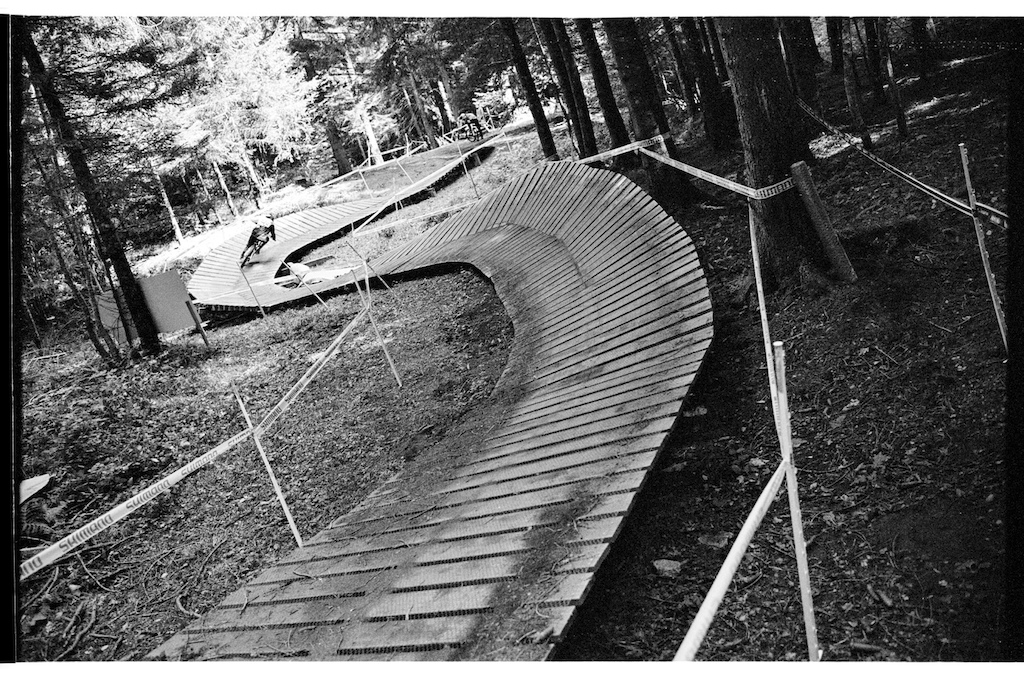 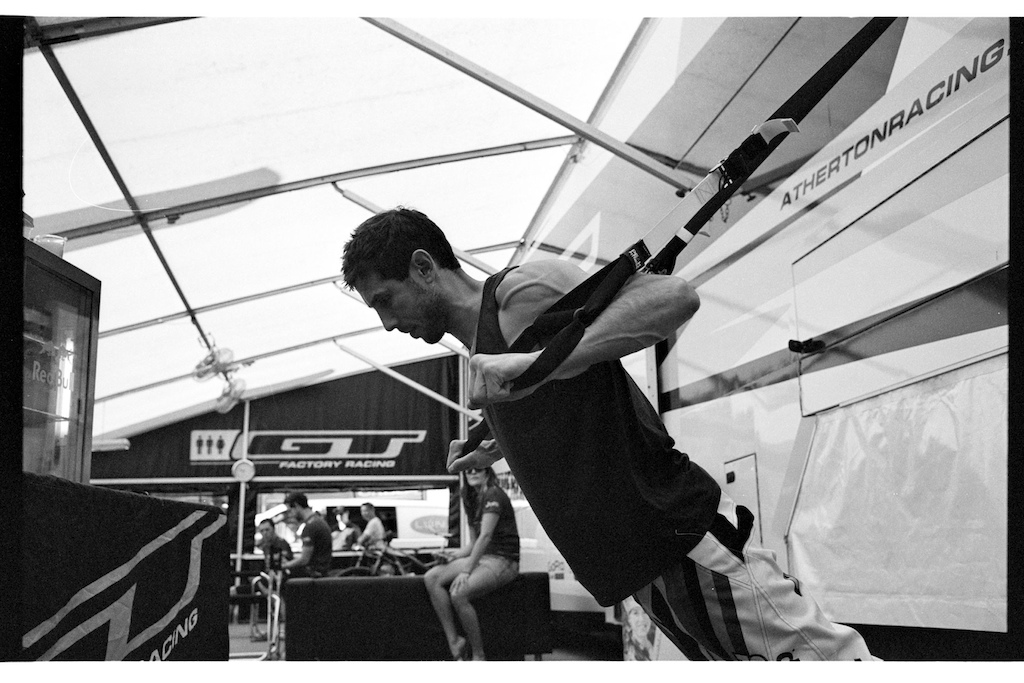 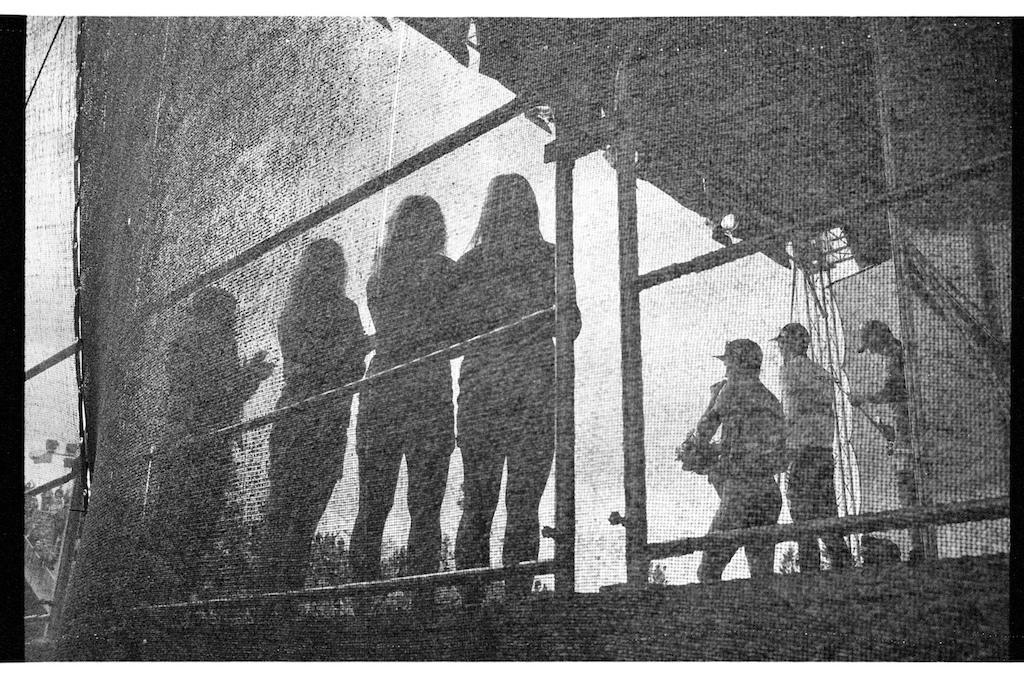 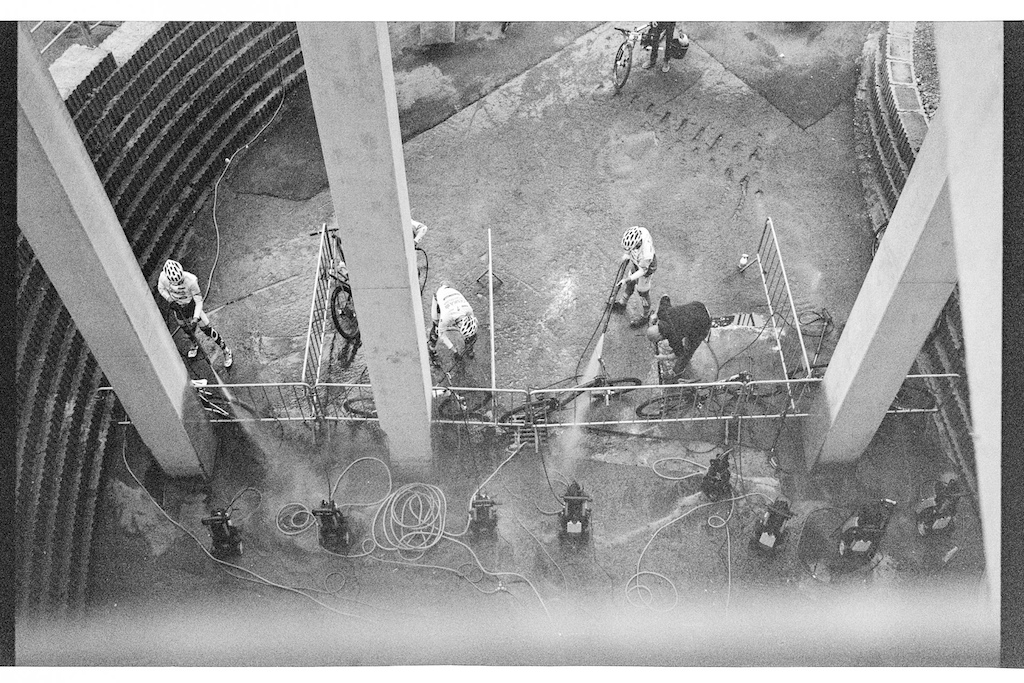 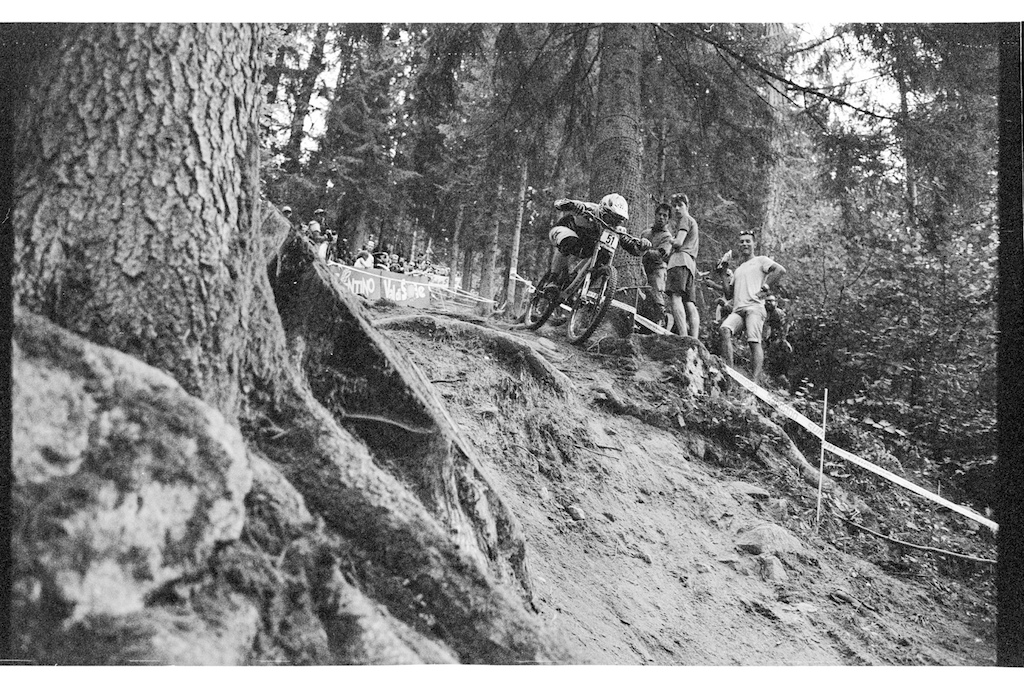 kev1n (Feb 10, 2016 at 19:28)
I've been shooting with my Nikon F3 a lot lately, both landscape and mountain biking. There is so much life in film photography. I think the simplicity and spirit of mountain biking ties in so well with this analog artform. I will always respect and use digital, but I get so much happiness out of film photography.

lkubica (Feb 10, 2016 at 23:33)
I did a lot film photography (stopped few years ago because it is really time consuming) and it has a soul, but for sports it is real pain in the ass ;-) Typically you need a lot of ISO sensitivity, on film you can get ISO3200, on digital, you get over 100,000 with comparable quality. I guess this makes those pictures even more special, because it was much harder to make them.
The only thing that makes me wonder is the usage of C41 film, which means that it is for standard (well, used to be standard) machine processing for ... colour filrms. More conventional BW requires hand processing in darkroom, which gives much more control over the process (e.g. contrast) and in general better results than C41.

bd4e1 (Feb 11, 2016 at 0:50)
@lkubica I don't think so. Actually I did some pretty good bike photos only with ISO 400. In my experience beauty of film photography is that you can shoot in the dark, with shitty camera, on exposed film, with shaky hands, drunk, stupid and upside-down and still somehow photos look amazing or at least "artistic"

Sidor666 (Feb 11, 2016 at 1:31)
@lkubica It's all up to you in film cameras, ISO is just 1 adjustment you can change, you can compensate low ISO with longer exposure time or lower (in nubmer) aprerture.
So it's a metter of experience and expectations, if you wanna take picture of a DH racer with lots of focal depth with low ISO well, this ain gonna happen

unless there is a shitload of light all over the place.

nswitalski (Feb 10, 2016 at 18:30)
Awesome edit! Rich images is all I can say. Funny though there is still the scanner EXIF data on these images! jaja! Thanks for sharing. Cheers!

orientdave (Feb 10, 2016 at 19:43)
"The appreciation of art comes when the proportion of success remains infinitely small regardless of the level of skill."
Nailed it. Unfortunately there are fewer and fewer who appreciate this in the general populous.
Great article. Excellent.

Note to self: Don't waste you breath asking the following question.

Is there any chance, ever, of a Documentary Photography POY on PB... please, PB.
The images here tell stories. Human stories.They take you in to the moment and leave you with unanswered questions.
That's why, personally, and no-one has to agree with me (nor do I care if you don't), I'll take these over most of the fantastic (and yes, they are fantastic) set ups in the POY contest.

snicholas11 (Feb 10, 2016 at 19:10)
It is really great to see someone willing to forgo new technologies in order to preserve something as cool and rewarding as this. Props to him

megatryn (Feb 11, 2016 at 0:46)
I shot a lot of Delta 400 with my Leica CL at last years Hillbilly Huckfest. It certainly gives a different challenge and feel than blasting digital files.

blackthorne (Feb 10, 2016 at 19:50)
Yes yes and yes. There's something special about film that goes beyond purely capturing every single frame of existence. It's about fate, as you said, an almost godlike acknowledgement that you were in the right place at the right time, for you to get that one perfect shot. Congratulations for not giving up on film.

bcamapgnolo (Feb 10, 2016 at 22:16)
I love grain and black and white. This is a good thing, can't wait for part two! Something about black and white and cycling and grain and emotion. So cool. I didn't realize Leica made a 50mm f.95, I thought the Canon 50mm f1 was a legend. So much to learn about so many things.

EnduroriderPL (Feb 10, 2016 at 23:02)
I adore Hoshis work! A long time ago I've tried to play with 100% analog camera without autofocus and it turned so well that I've ditched it untill I bought digital one.

To take a quality picture on full analog camera takes a lot of knowledge and even more skills. That's why I love Hoshis BW pictures - it takes a true craftsman to do such a great job.

piranah (Feb 11, 2016 at 9:27)
Leica die hards are probably crying at how dusty his camera is. Great piece. I started shooting with a Kodak Brownie. Where you have 0 control of shutter or aperture. Its challenging for sure.

otrider (Feb 11, 2016 at 14:53)
I cut my teeth shooting slide at the dawn of digital. No better experience or way to learn IMO. No room for error, limited post production. You really had to think through your shots, understand the technique, and know about film types, lighting and filter effects. Each canister was a mystery until you got those images under a loupe. So much fun and probably still some of the most memorable photos in my collection.

btw: "The Hateful Eight" was also completely shot analog and it looks phenomenal!

pascalchristen (Feb 11, 2016 at 13:58)
so was "Star Wars: The Force Awakens"
Movies used to be shot a LOT longer on film than stills... actually, most of the top movies were analogue up until 2012.
source: stephenfollows.com/film-vs-digital

rmalexan (Feb 11, 2016 at 23:40)
Am I the only one with no prior photography skill that now wants to go get a film camera and end up being frustrated for hours because they have no idea how it works? No? Ok, just me..

friedrice (Feb 10, 2016 at 19:18)
Unless you're running a camera with GPS, EXIF only has time and date, as well as camera settings and serial. If you're getting your camera confiscated by the police, you have bigger problems.

suspended-flesh (Feb 11, 2016 at 14:21)
@friedrice Sure, some people have those problems - not me. Embedded data can help prove that your camera (and you by association) may have been at a place (the subject matter of the photo) at a time (when the photo was taken) when something may have happened. This is viewable online, and if you are found to be in possession of the device, circumstantial evidence is created.

bikesoverbritches (Feb 11, 2016 at 11:29)
There will always be a place for analog even as it gets harder to buy and develop film. So much respect for the true craftsmen of the field.

Patsplit (Feb 16, 2016 at 18:58)
Great photos! I've noticed a few PB photogs have been scrubbing their EXIF data. It makes me sad because I can't learn how they took their amazing shots. Why?!?!

Seriously though. Modern *film* cameras are often capable of recording EXIF. Overpriced Swiss/German optical tech tries to sell you on all sorts of things, mostly elitism.

You might as well have gone with:
"No automatic film advancement"
or
"Parallax Sucks"
or
"Oops that lens was 2500 bucks and not designed to take a fall like that"

friedrice (Feb 10, 2016 at 19:19)
Those aren't cleanable. Low light, high speed film and a push of brightness by a few stops is going to do that to film or digital.

b-mack (Feb 12, 2016 at 20:04)
I've shot countless rolls of XP2 Super and though the quality will go down if you push the film, it shouldn't blow out like some of those scans. He probably did just get a CD at the local drug store, but all it takes to clean them up is to import them to a decent editing program and at least clean up the dust and give them a little contrast. I don't think @Alainsleig is being too harsh to say it when this guy is promoting his work on the PB front page.

b-mack (Feb 13, 2016 at 9:08)
@wuttupausten XP2 Super is a chomogenic film..it's not really possible to get the exposure wrong as it can be shot a a wide range of speeds and still developed normally. Exposure has to be corrected in post/printing. It's just clear he didn't do that.