Fall Adventure in the South Chilcotins

With the warm summer months coming to an end, we had one last chance to snag a floatplane to the South Chilcotin Mountains. Soon, the zone we planned to ride would be covered in snow so deep that only sleds and skis would be able to access it. Our friends and partners at Tyax Adventures were just about to close down summer operations but gave our crew of big mountain freeskier Mark Abma, Squamish shredder Cassandra Prochera, and Norco staffers Jonathan Duncan and Tom Richards the green light for one final flight to our favorite alpine playground.

We checked the weather forecast a few days before our departure and found we were in for a mix of rain, flurries, high winds and freezing temperatures. Armed with layers of warm, waterproof gear, our trail bikes, and high spirits, we started the drive from Vancouver despite the forecast. We were looking forward to flowy trails in picturesque, fall-colored meadows, and post-ride beers by the fire, but we also had a touch of trepidation as we anticipated high mountain passes and a low freezing level.

Sure, we felt prepared, but really, when do you have any idea what the backcountry will throw at you? 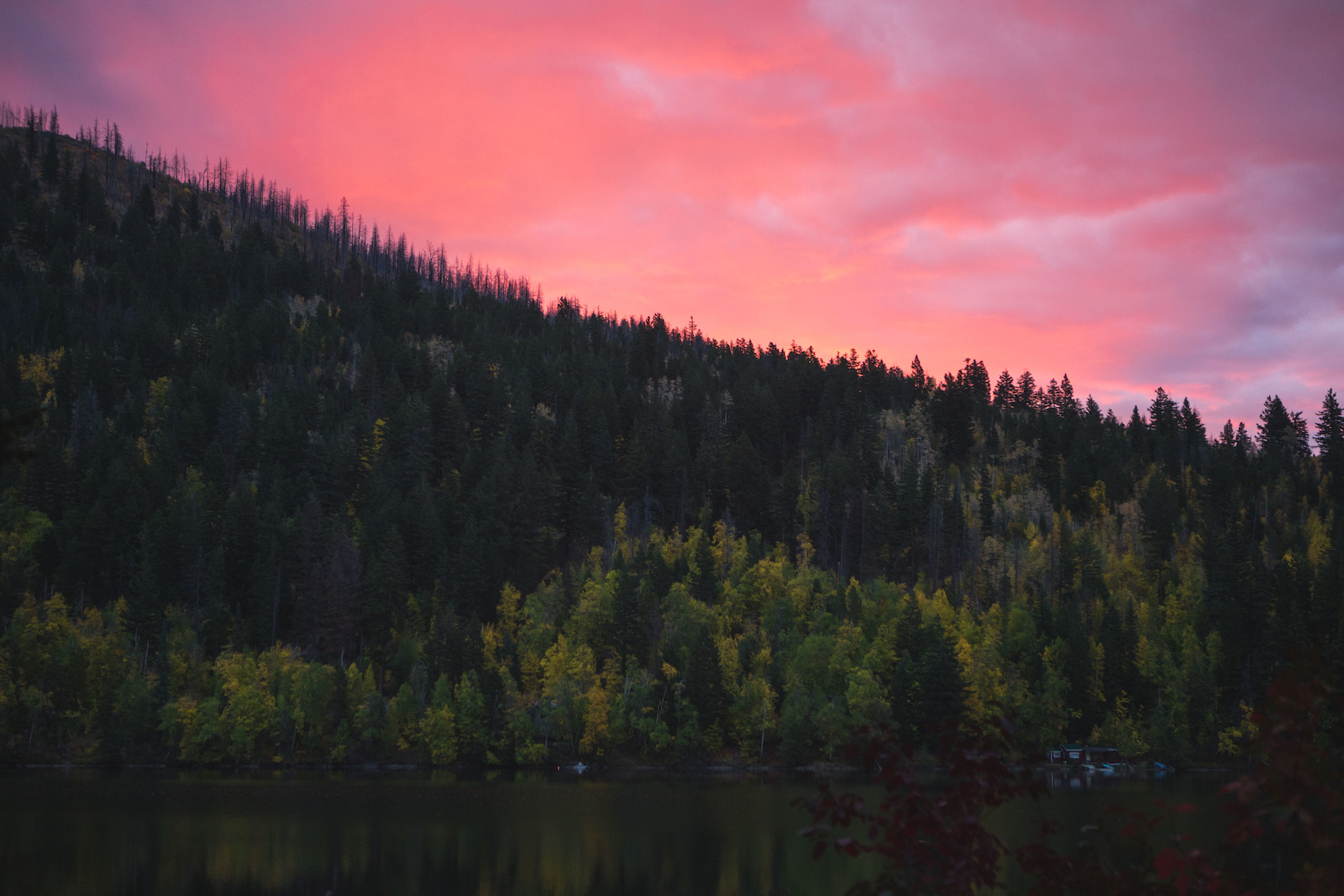 FALL ADVENTURE
IN THE
SOUTH CHILCOTINS 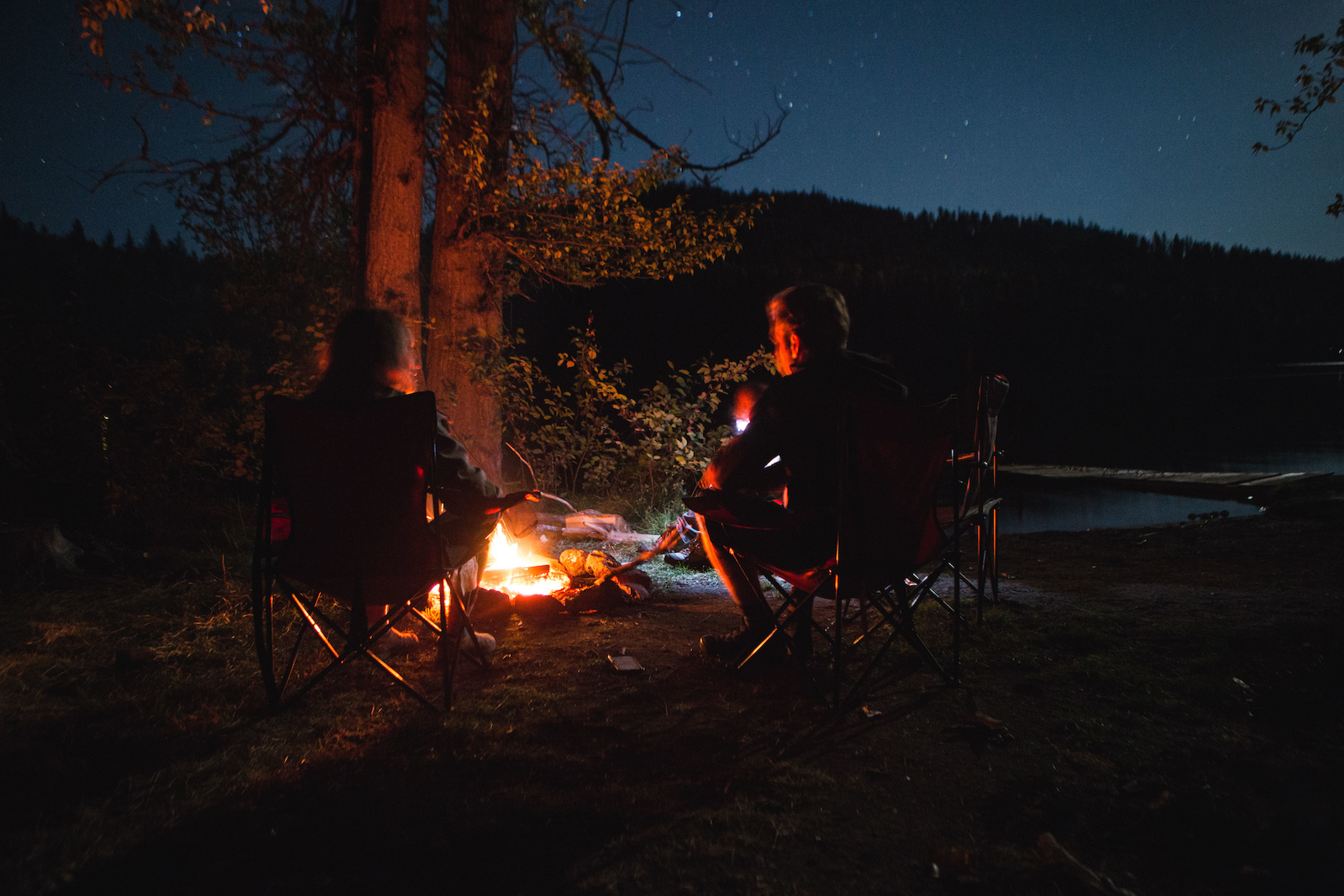 Our first night, we arrived late and set up camp on Tyaughton Lake, just down the road from Tyax Lodge. 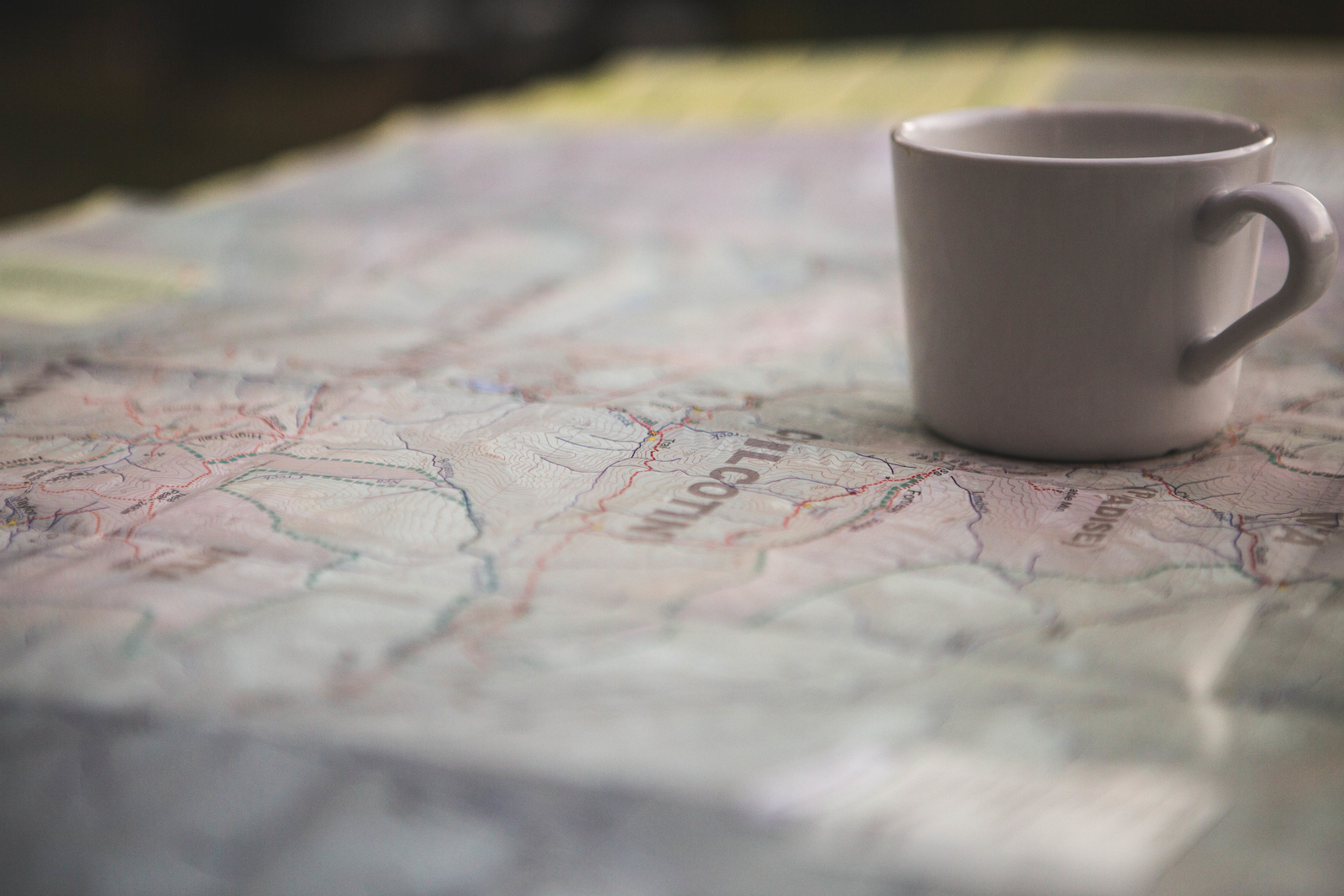 Before heading out, the group went to Tyax Lodge to thaw after a cold night and discuss the route for the weekend. If the snow cooperated, we planned to spend the day riding in the vicinity of Spruce Lake before taking the High Trail up to Windy Pass on day two, traversing to Eldorado cabin, and then descending the Lick Creek trail. 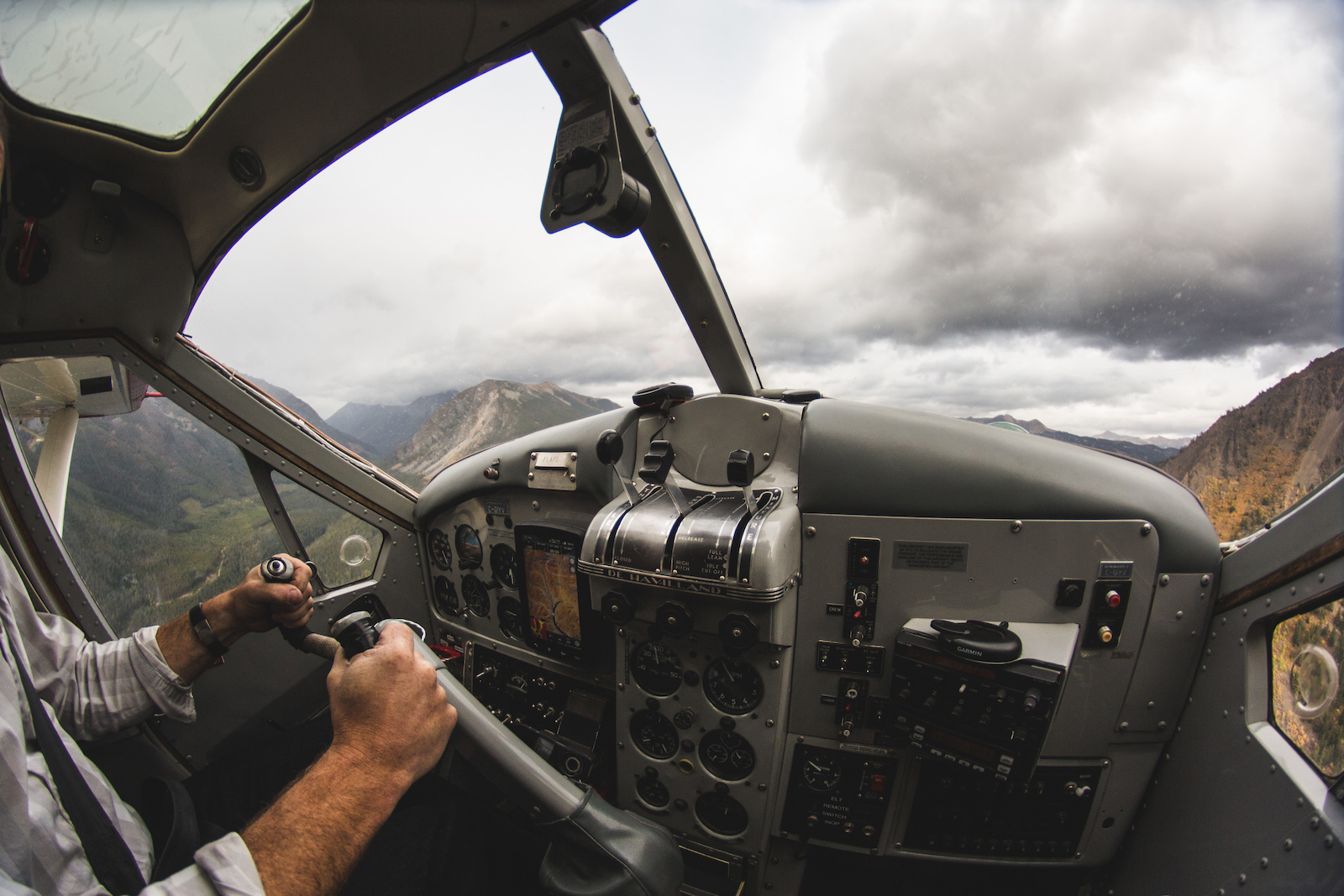 We met up with Dale from Tyax Adventures, loaded the bikes into the floatplane and took off to Spruce Lake. 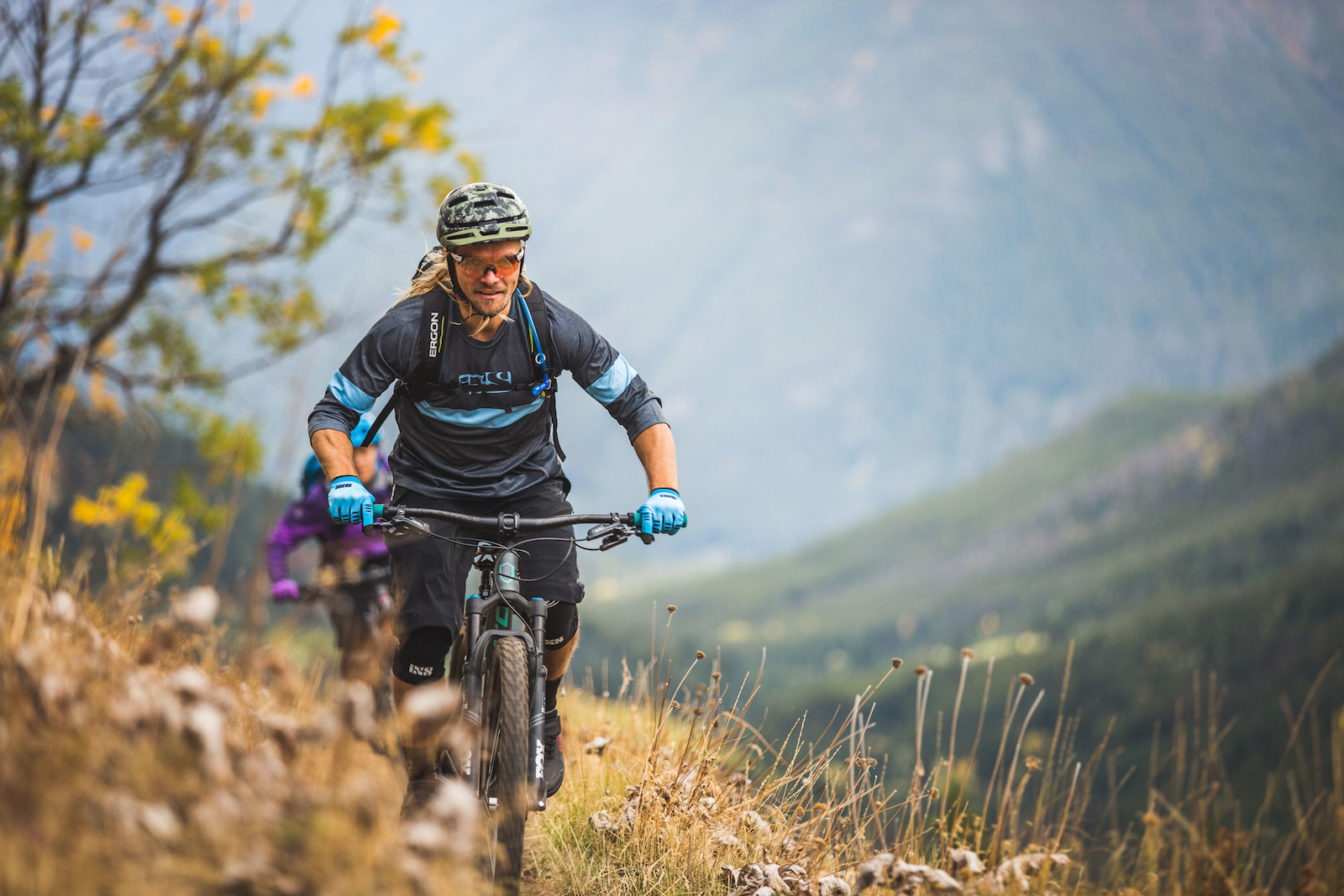 After a stunning flight, we got our first chance to explore the singletrack in the lower grasslands amidst the fall-colored Aspen trees. 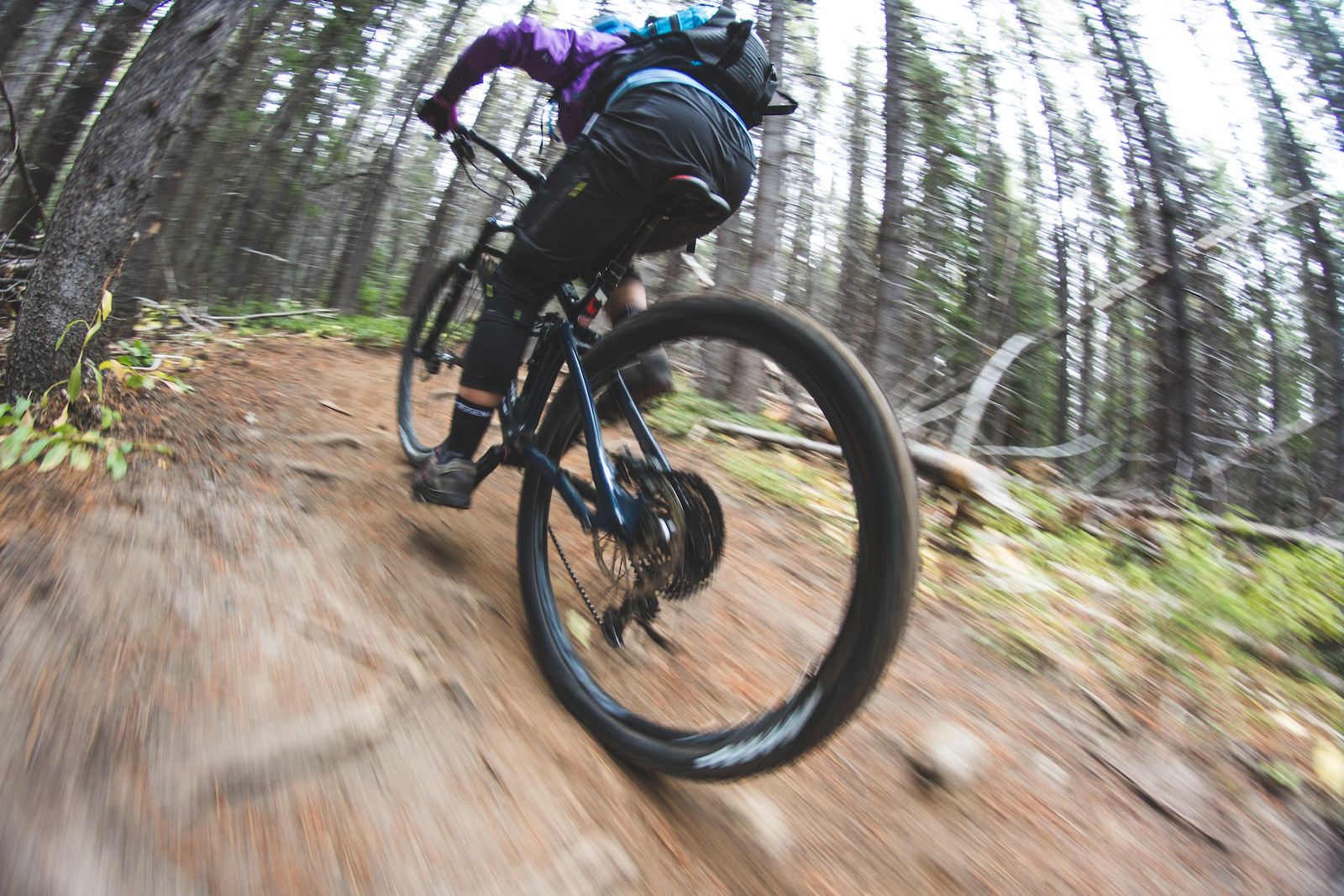 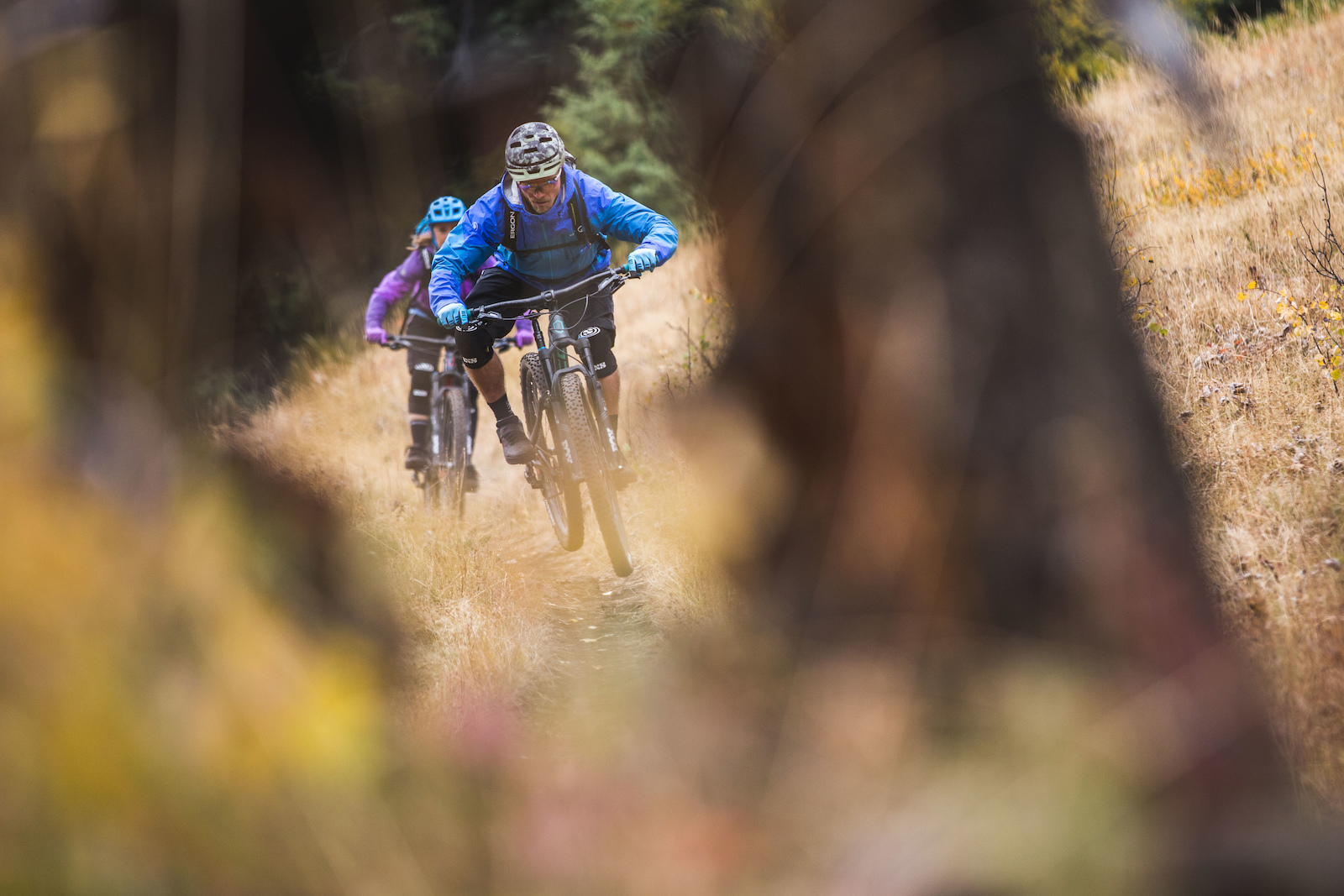 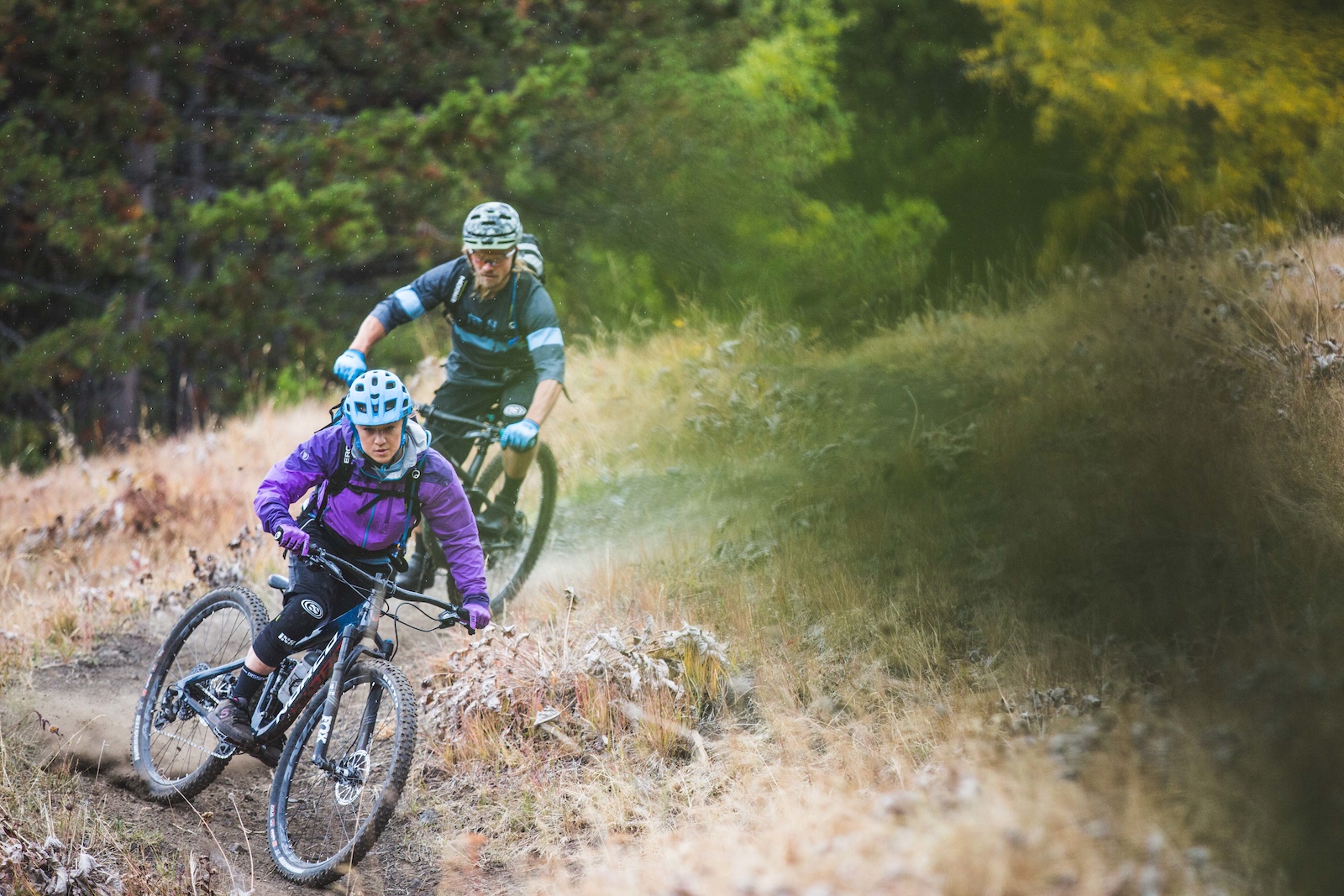 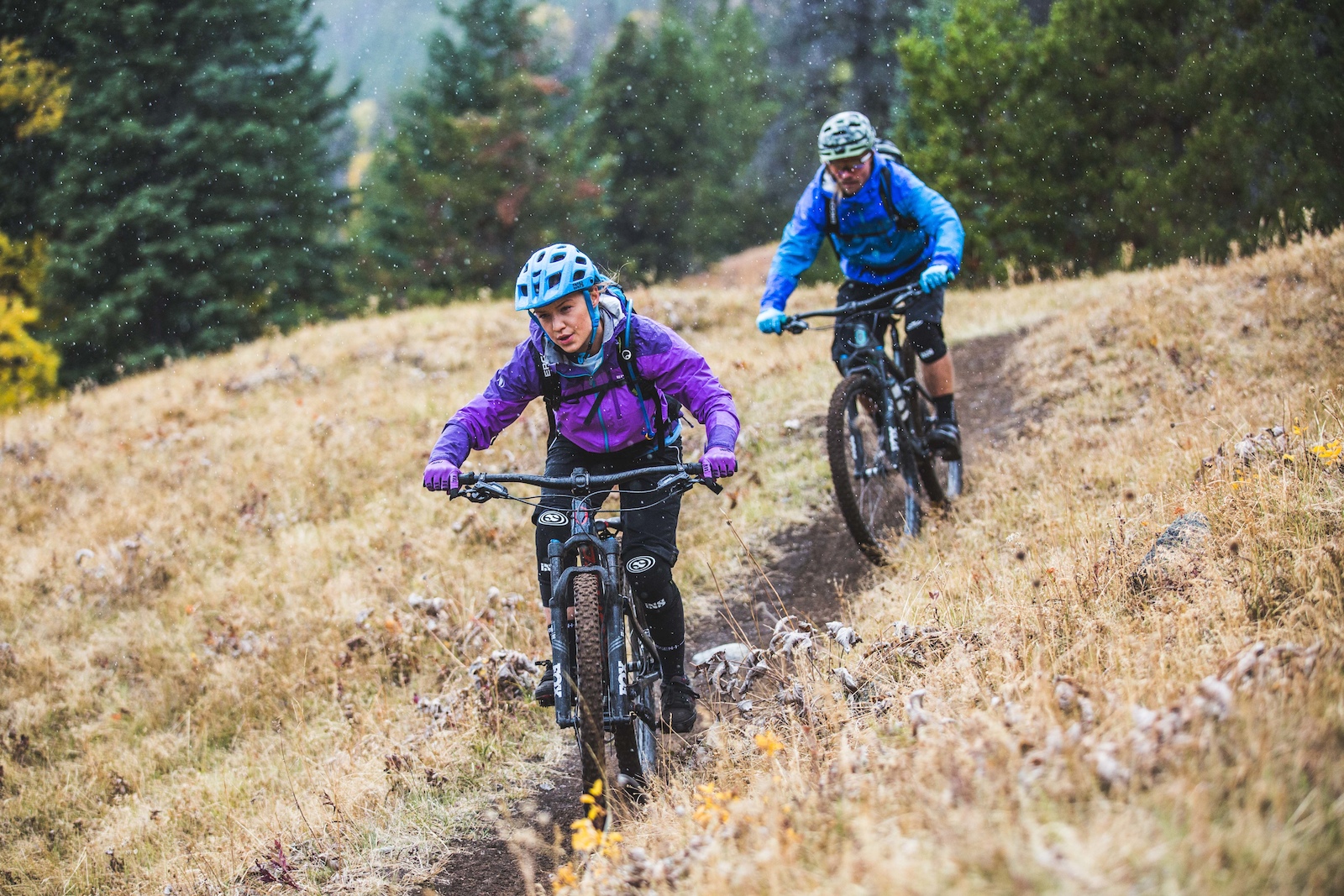 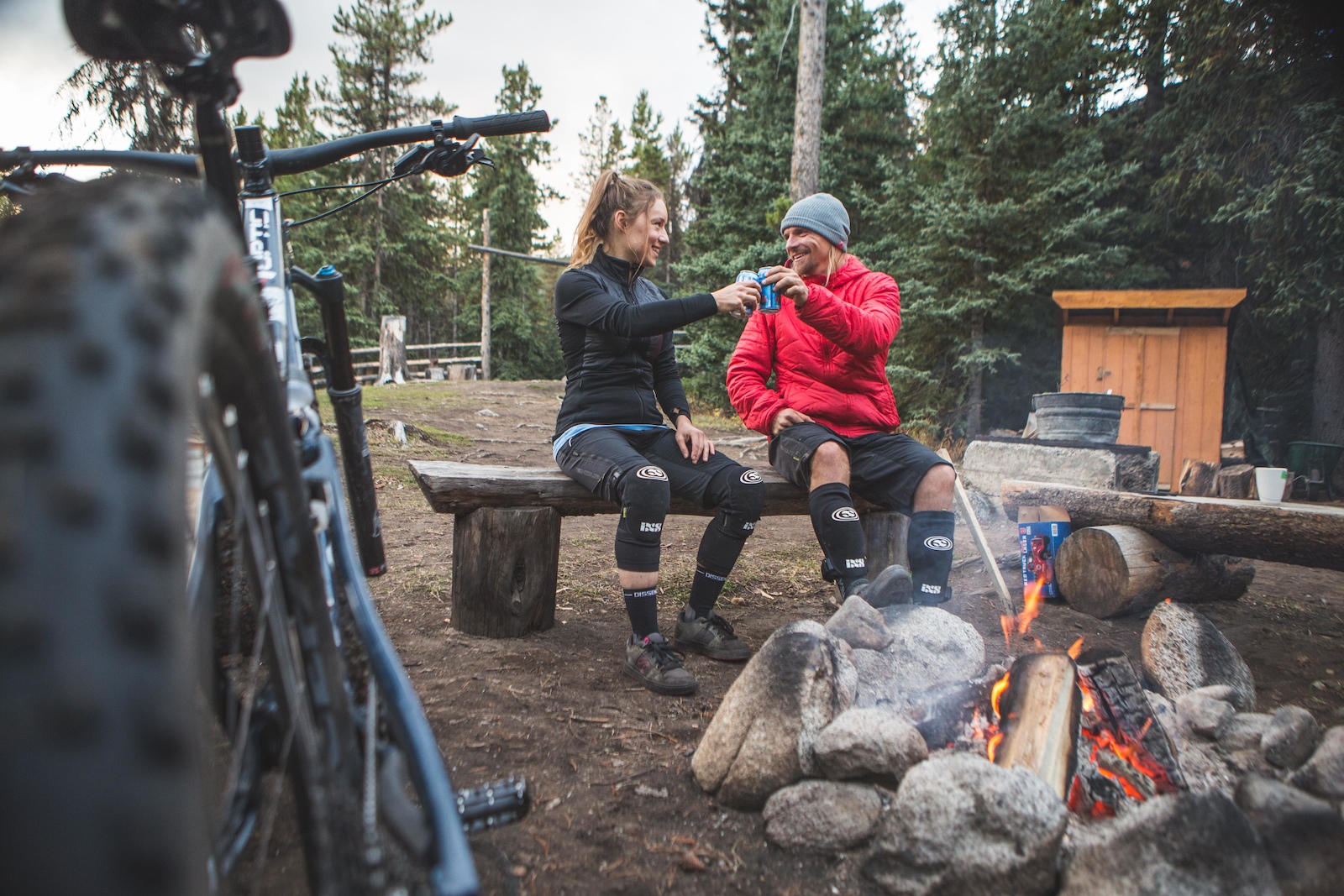 The first day ended with steaks on the grill at Spruce Lake Camp, beer, and a warm campfire. What more could you ask for? We told stories into the evening and all got to know one another better.

The sound of pelting rain hitting the canvas tents echoed throughout the night. The rains were later replaced by freezing temperatures, and at first light, we discovered that the snow line was so low that everything around us had turned white. Despite the dusting of snow and ice-covered bikes, the group decided to make the push up and over Windy Pass. 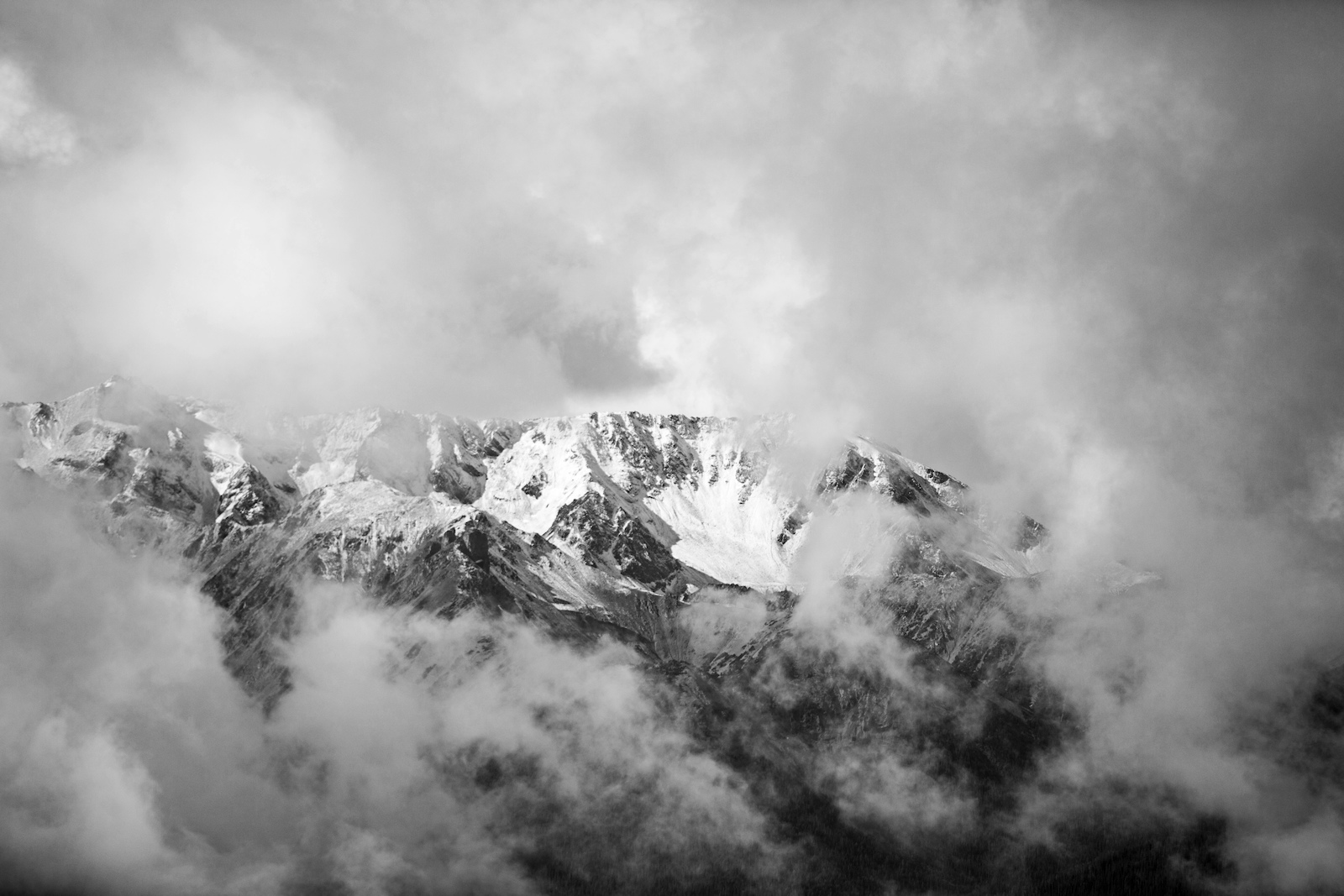 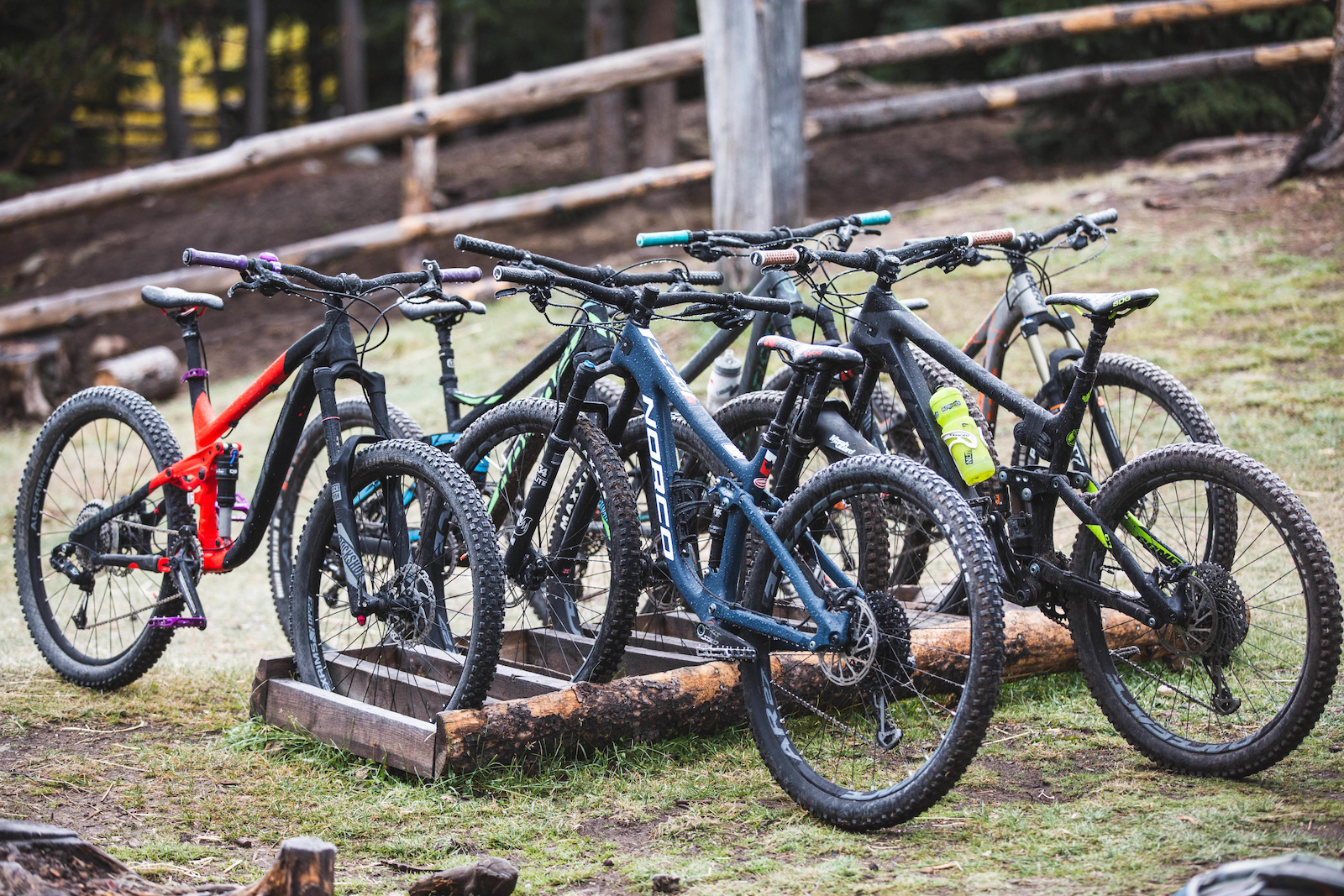 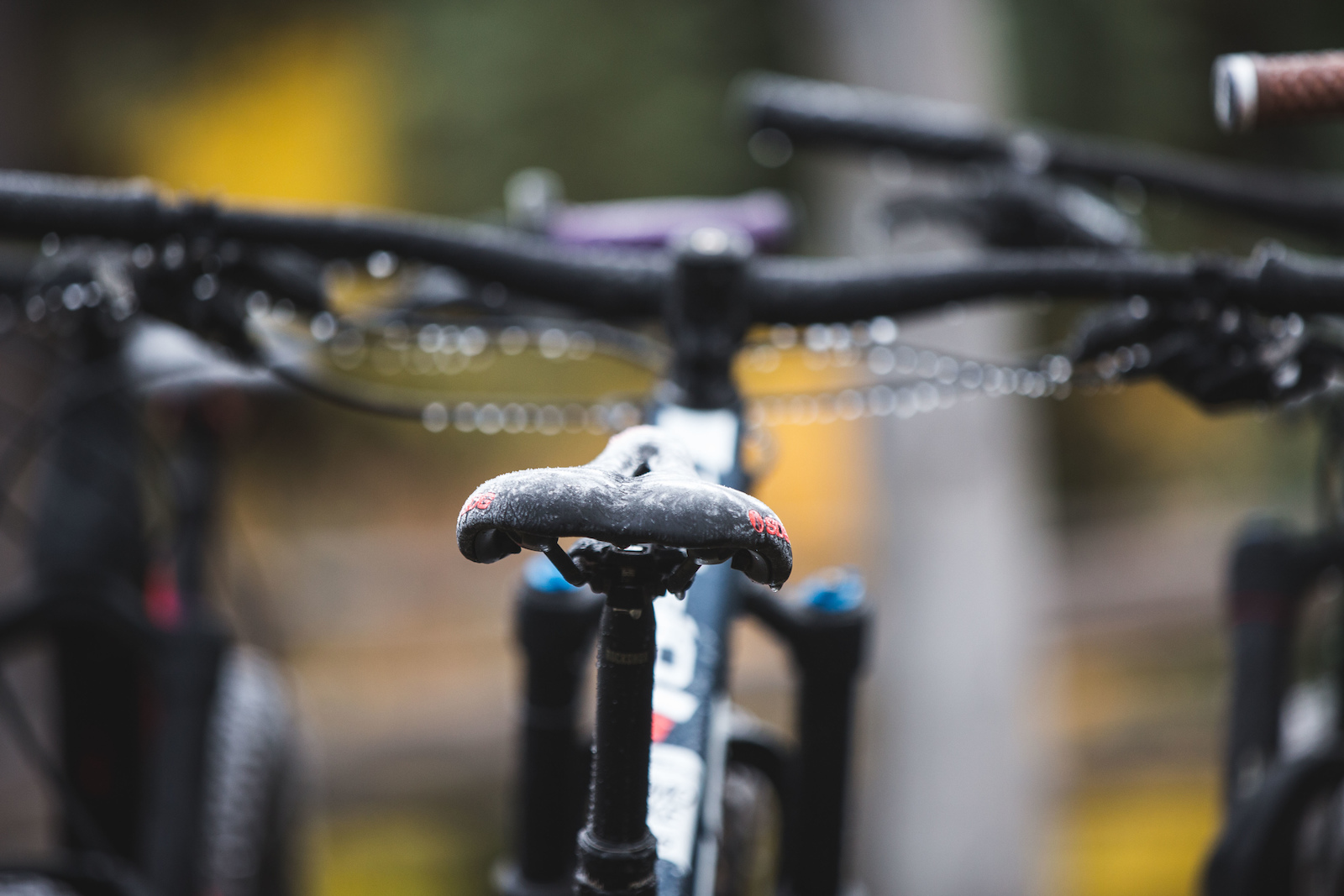 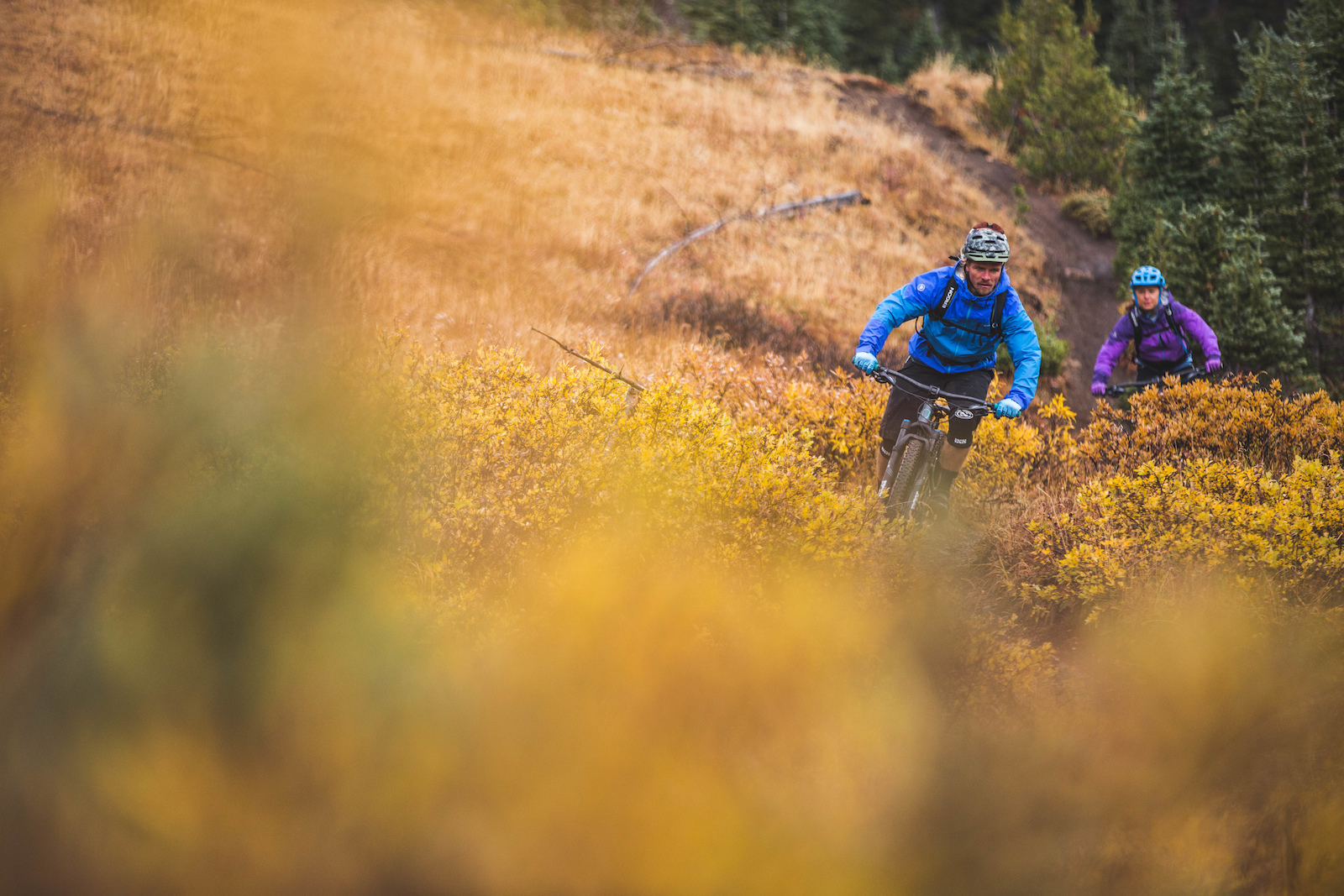 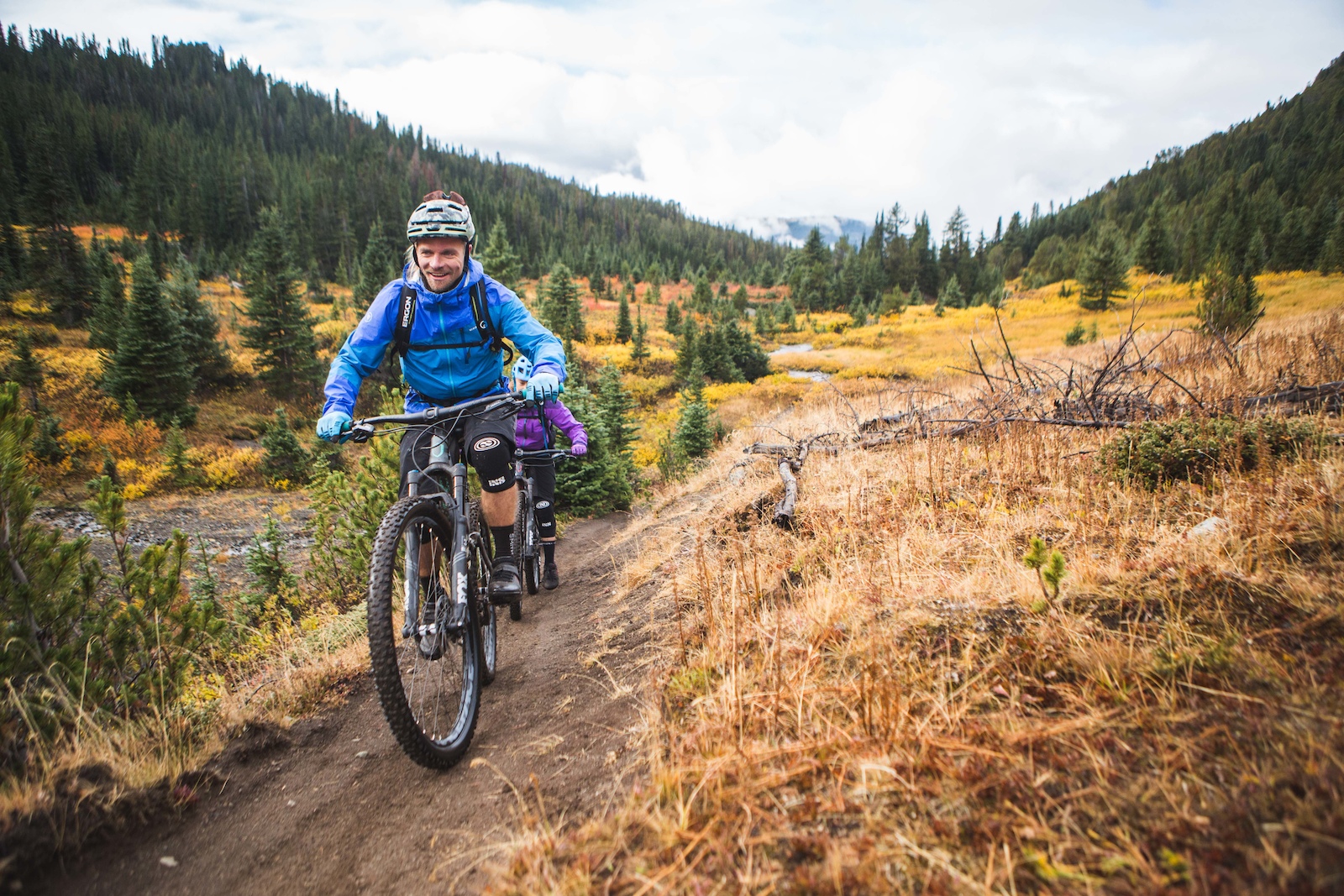 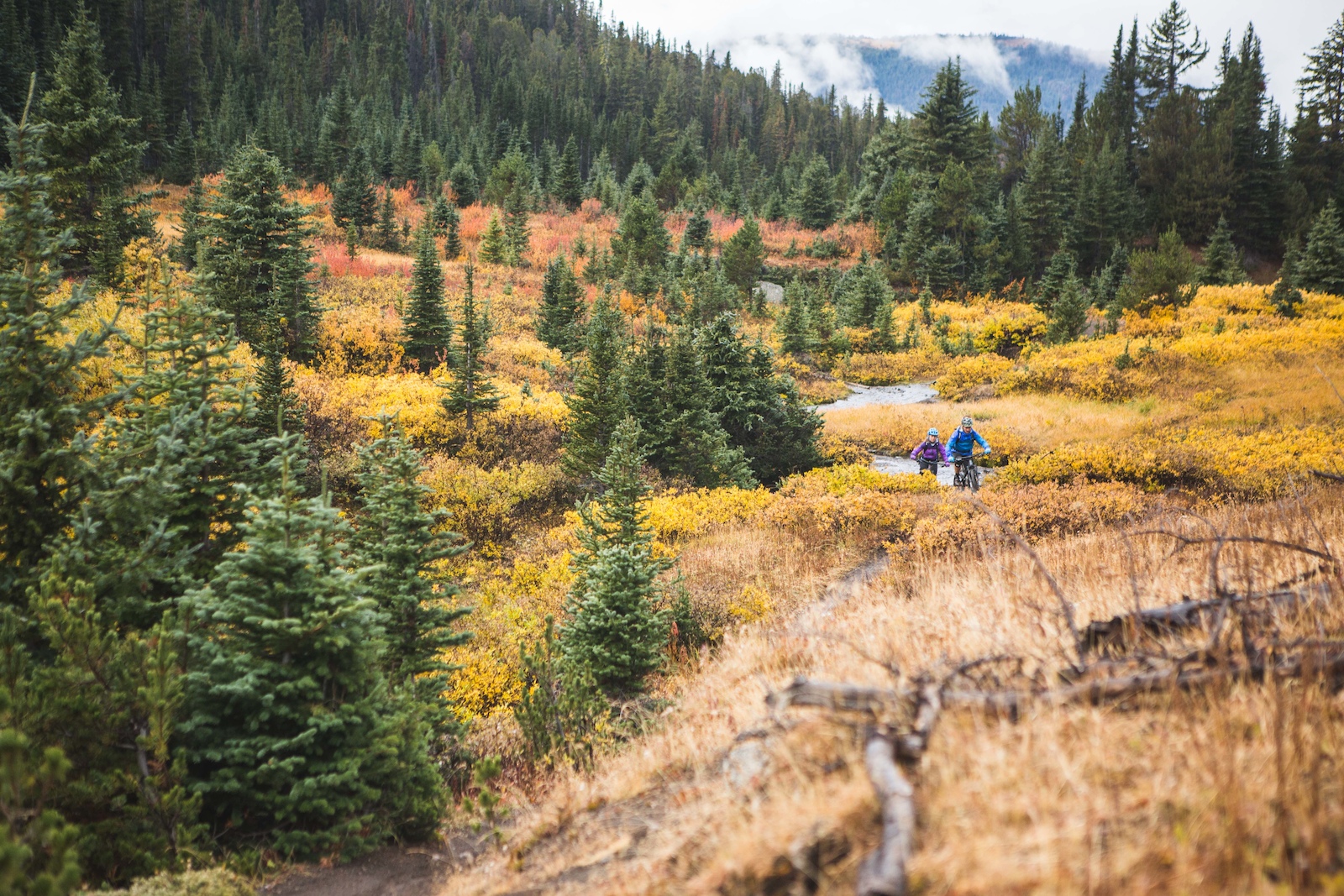 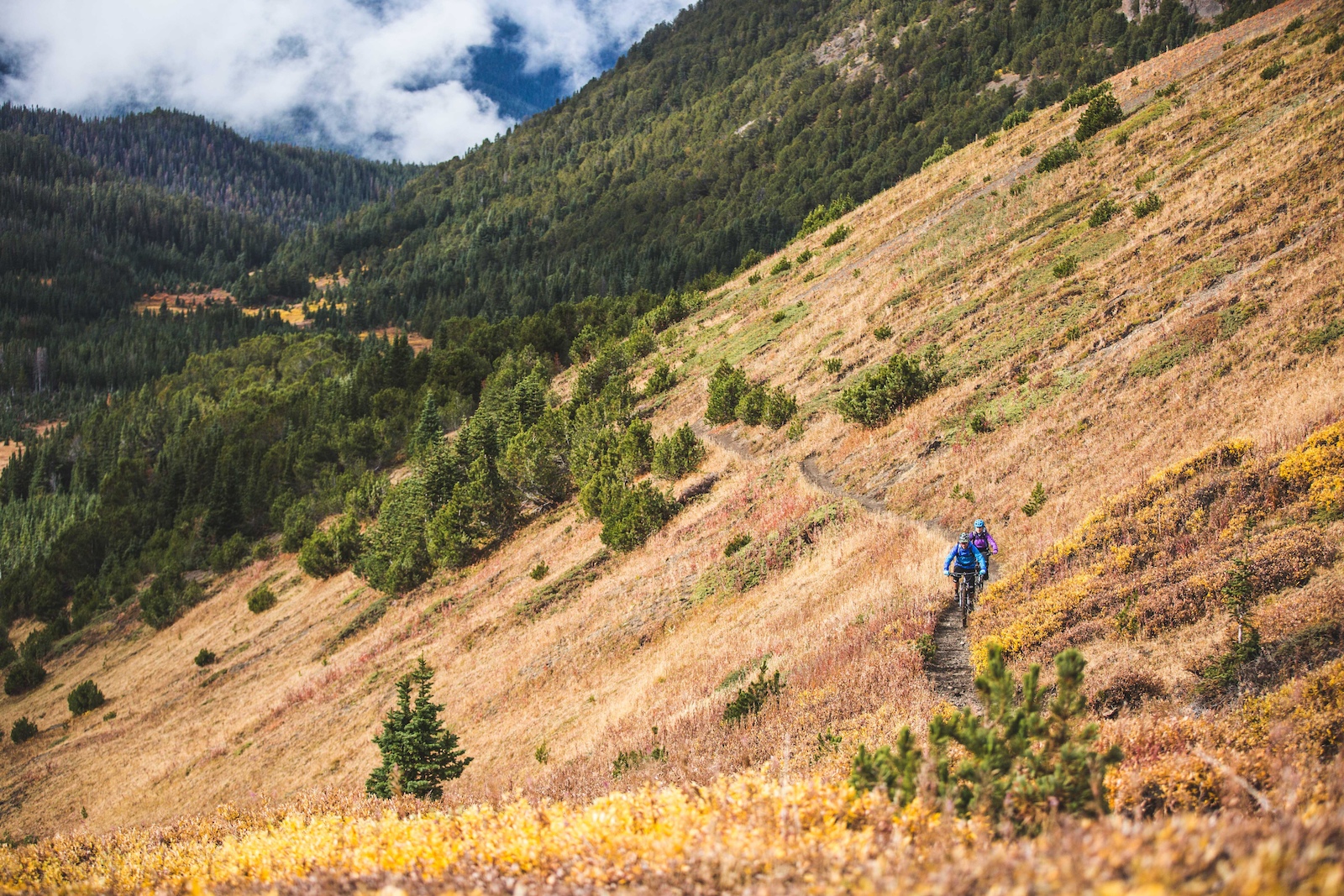 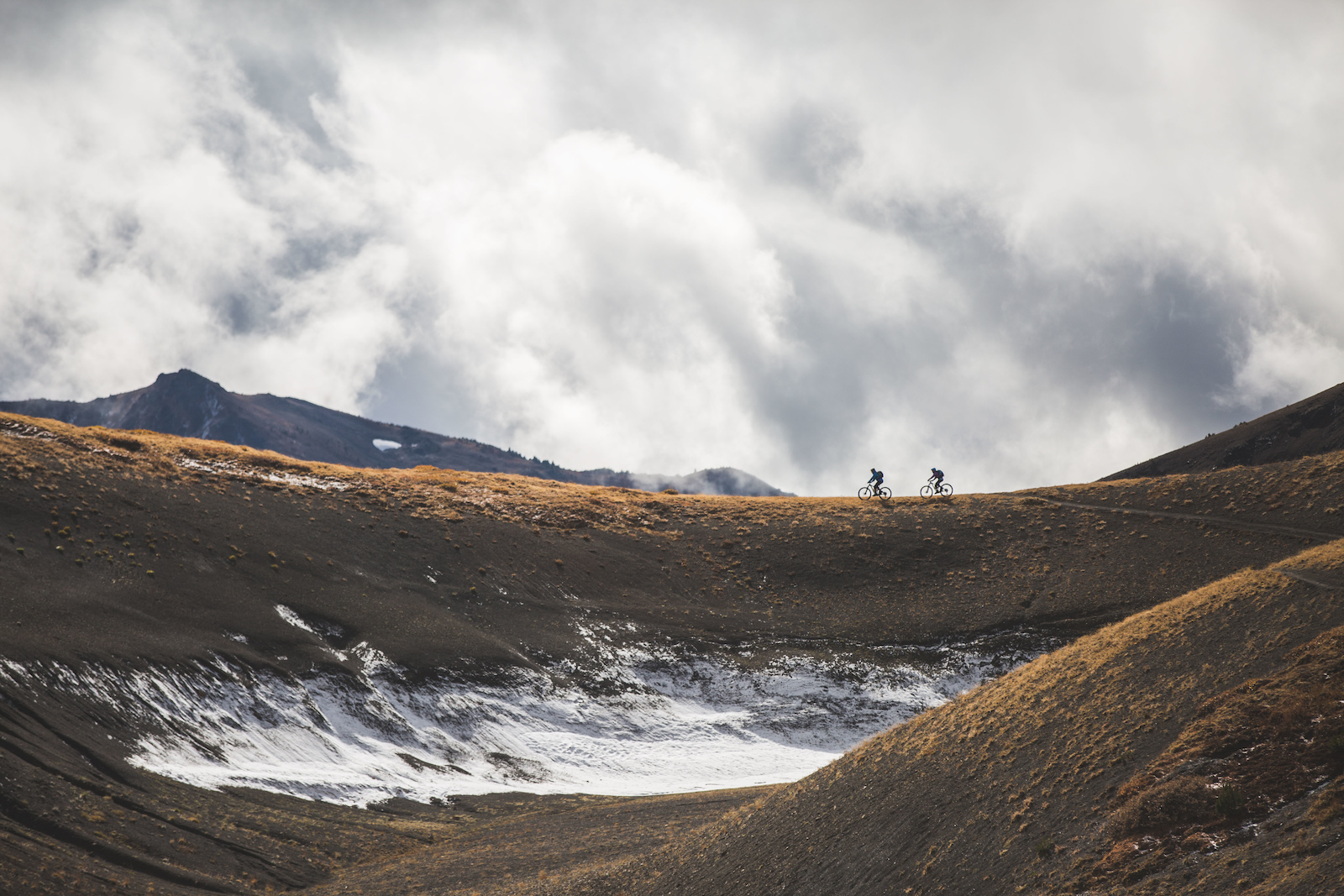 After hours of climbing, the group reached the top of Windy Pass, and we were rewarded with awesome panoramic views of the mountains. 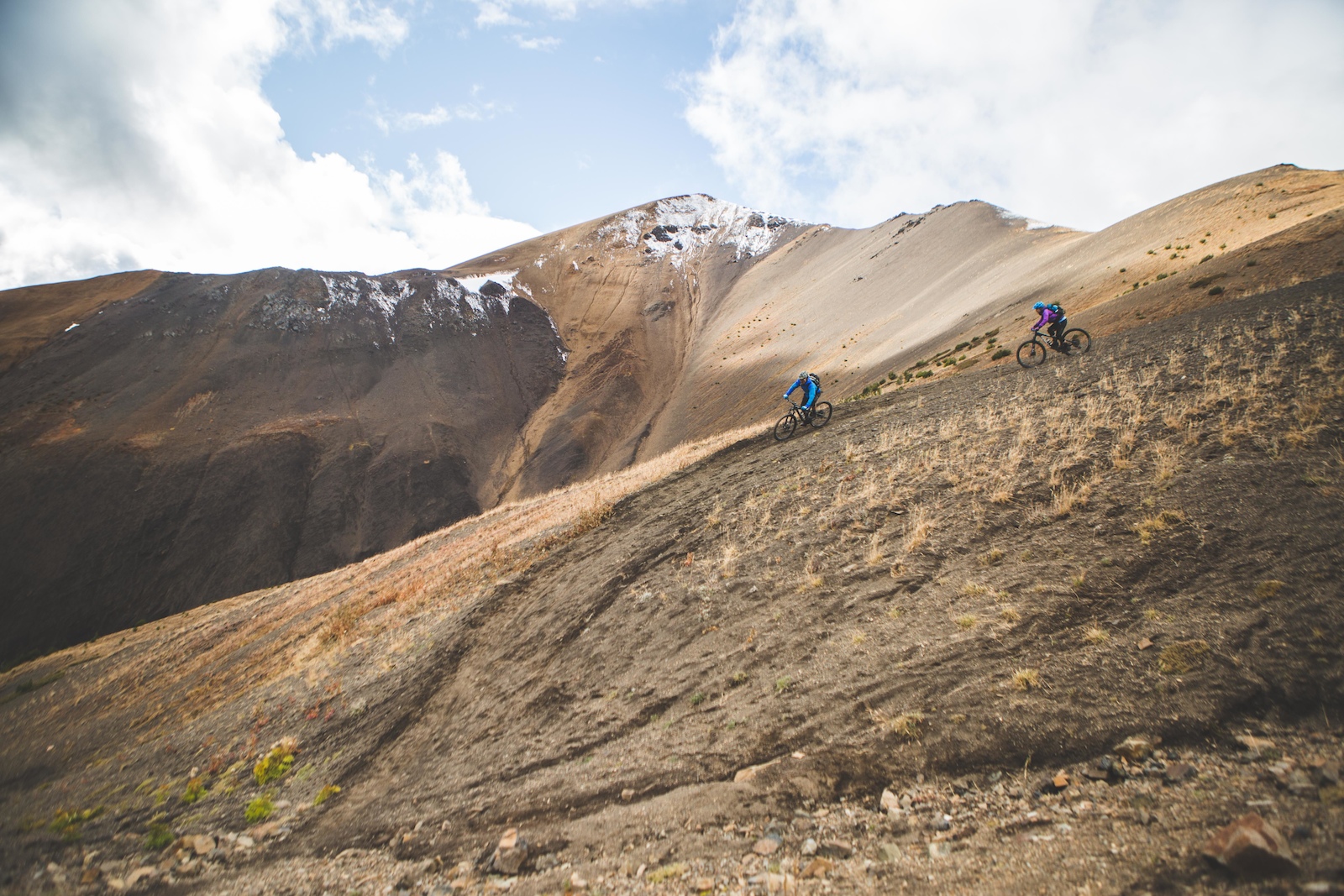 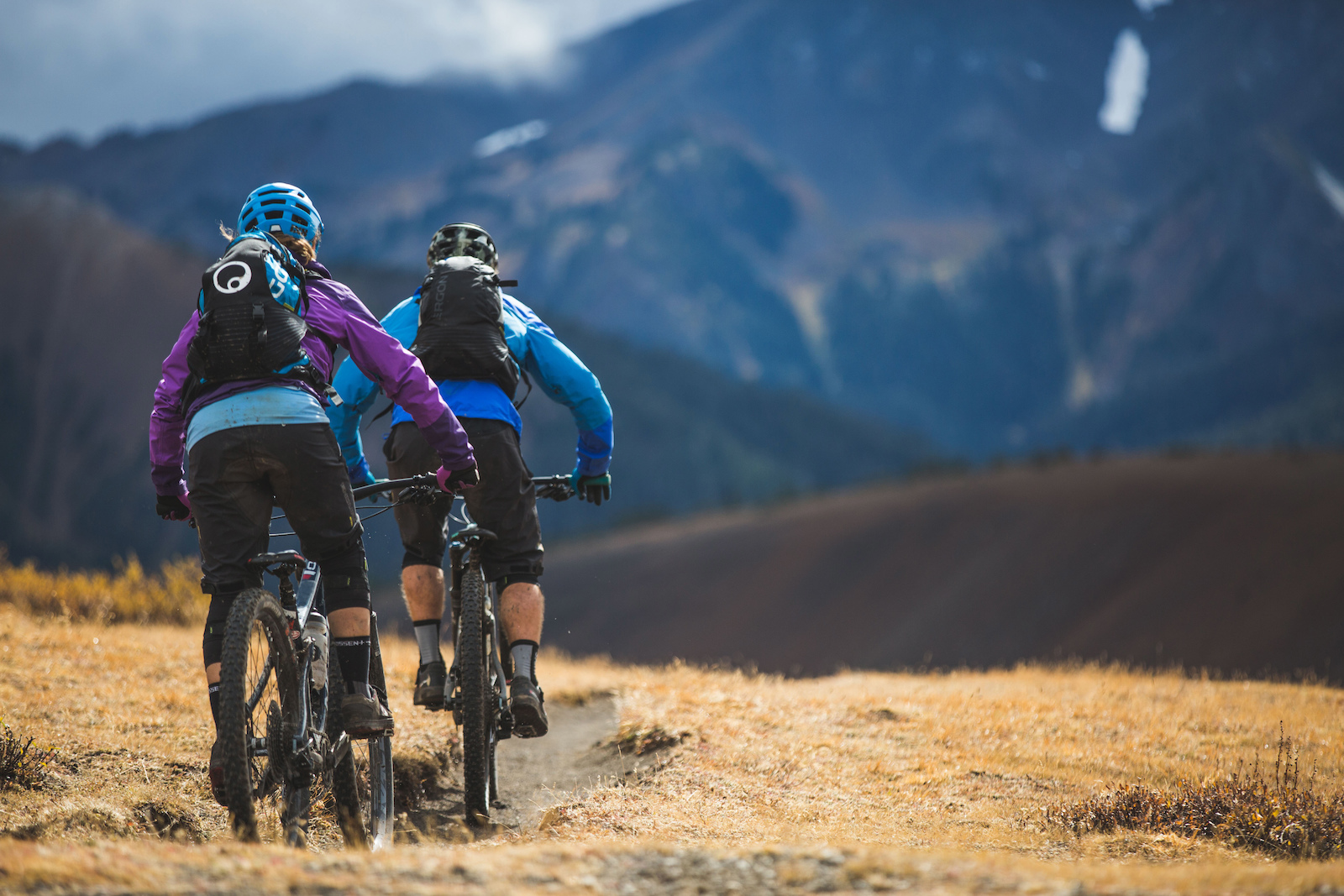 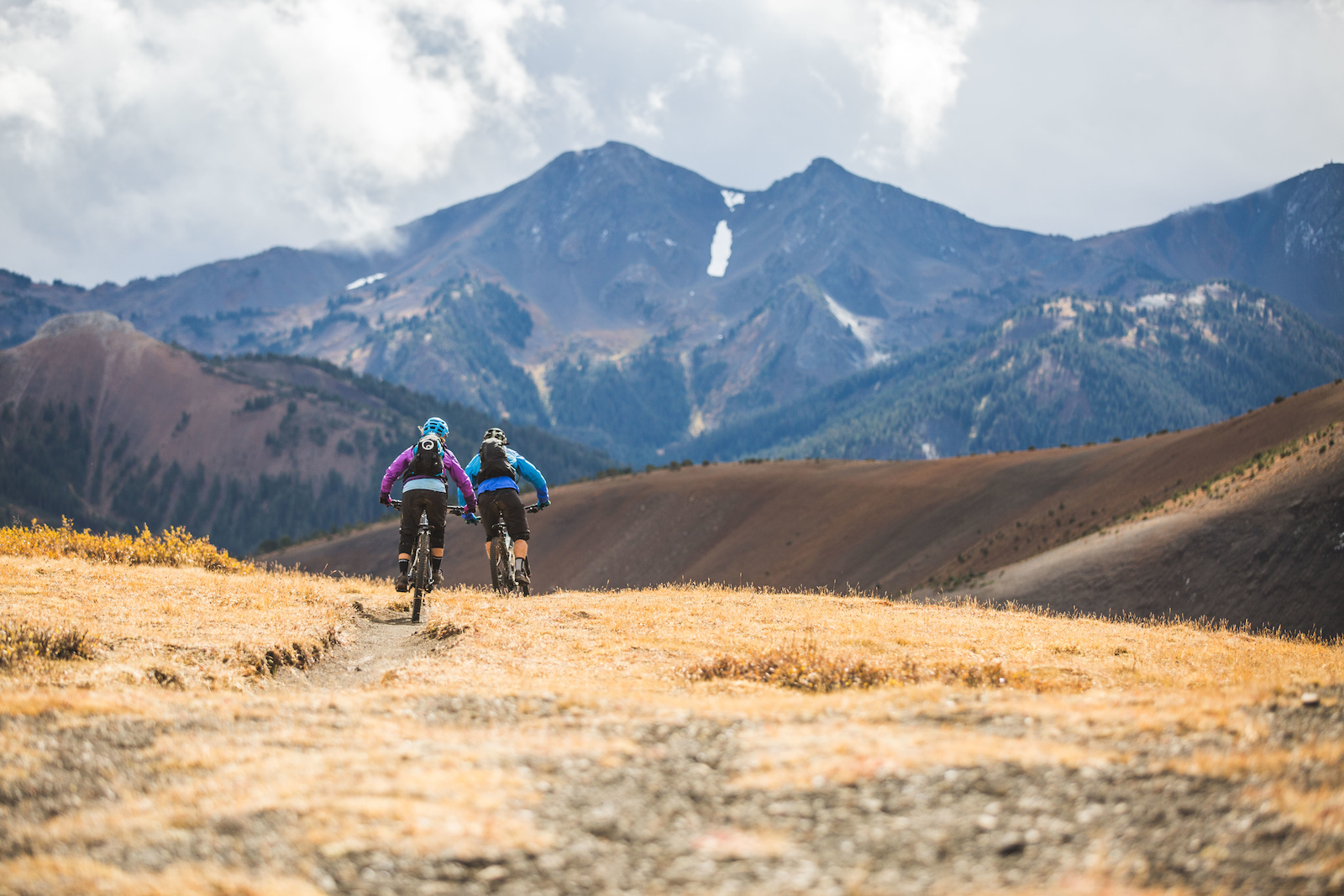 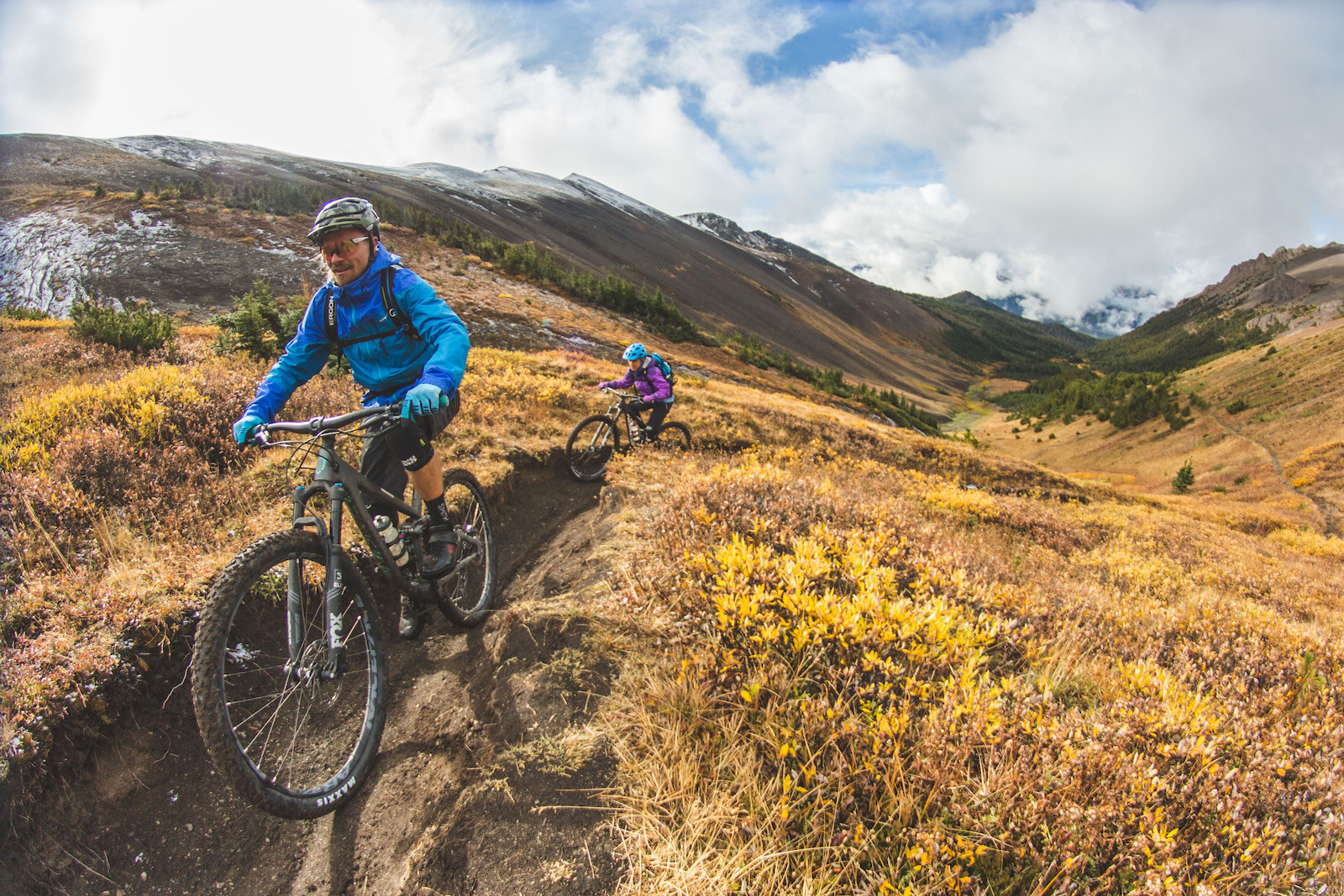 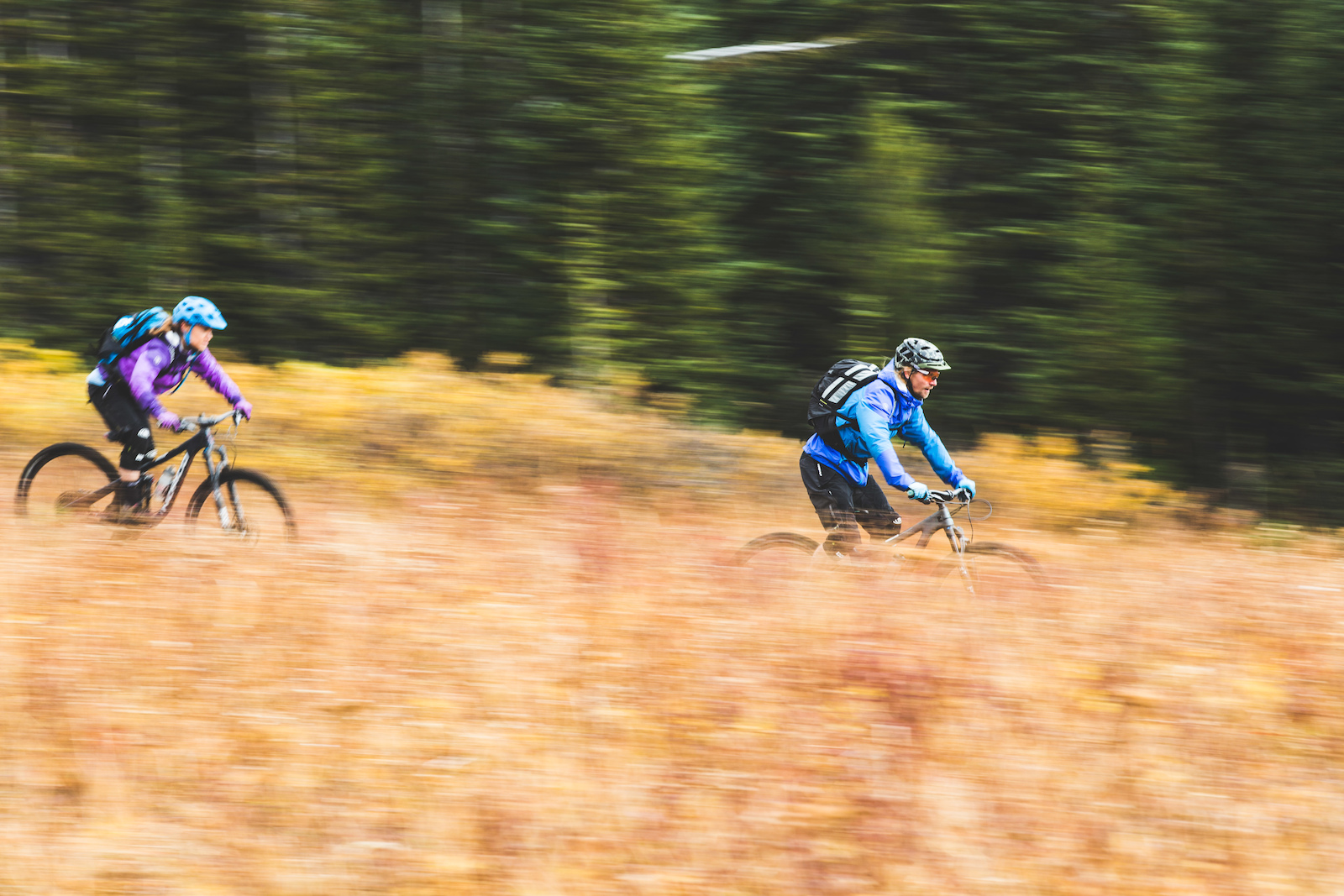 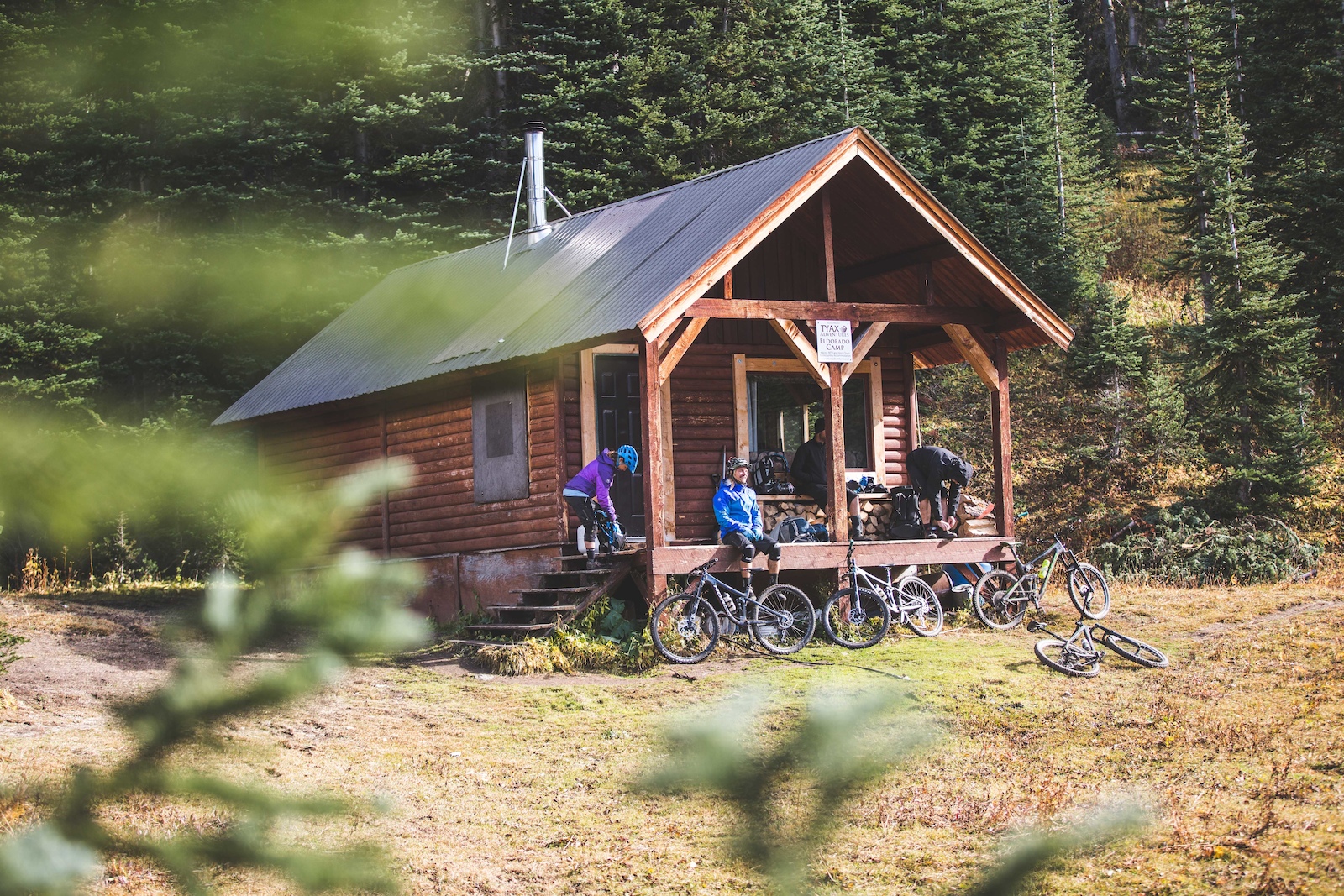 You'd never guess from this photo that five minutes earlier we were caught in a short, but heavy snowstorm.

The weather shifted quickly from snow to hail to rain as we made our way down Lick Creek. There was an intense hail storm, where we had hail bouncing and ricocheting off our helmets. And then, as we continued to descend, the hail turned into rain. It poured with rain for the remainder of the descent and into the evening. 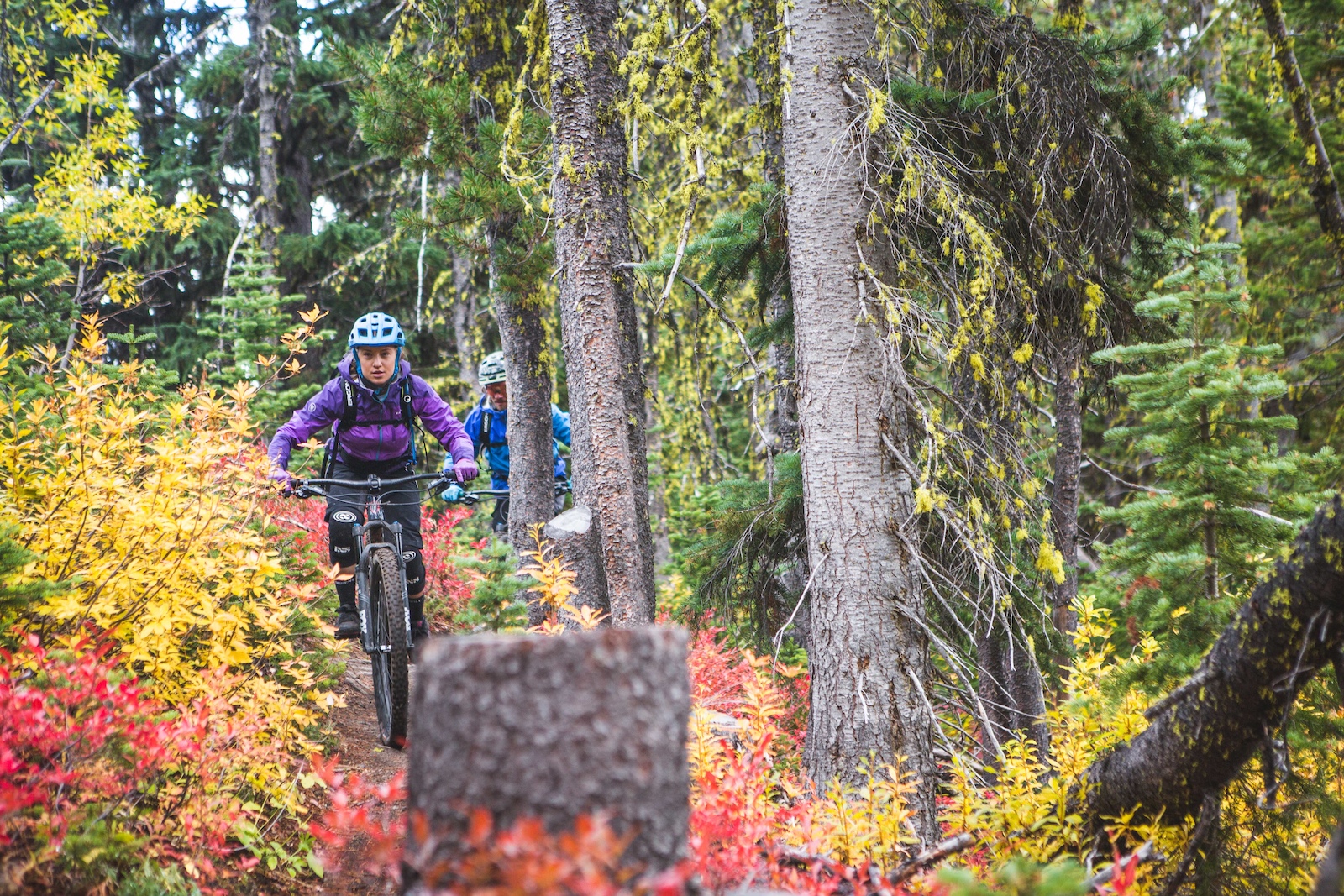 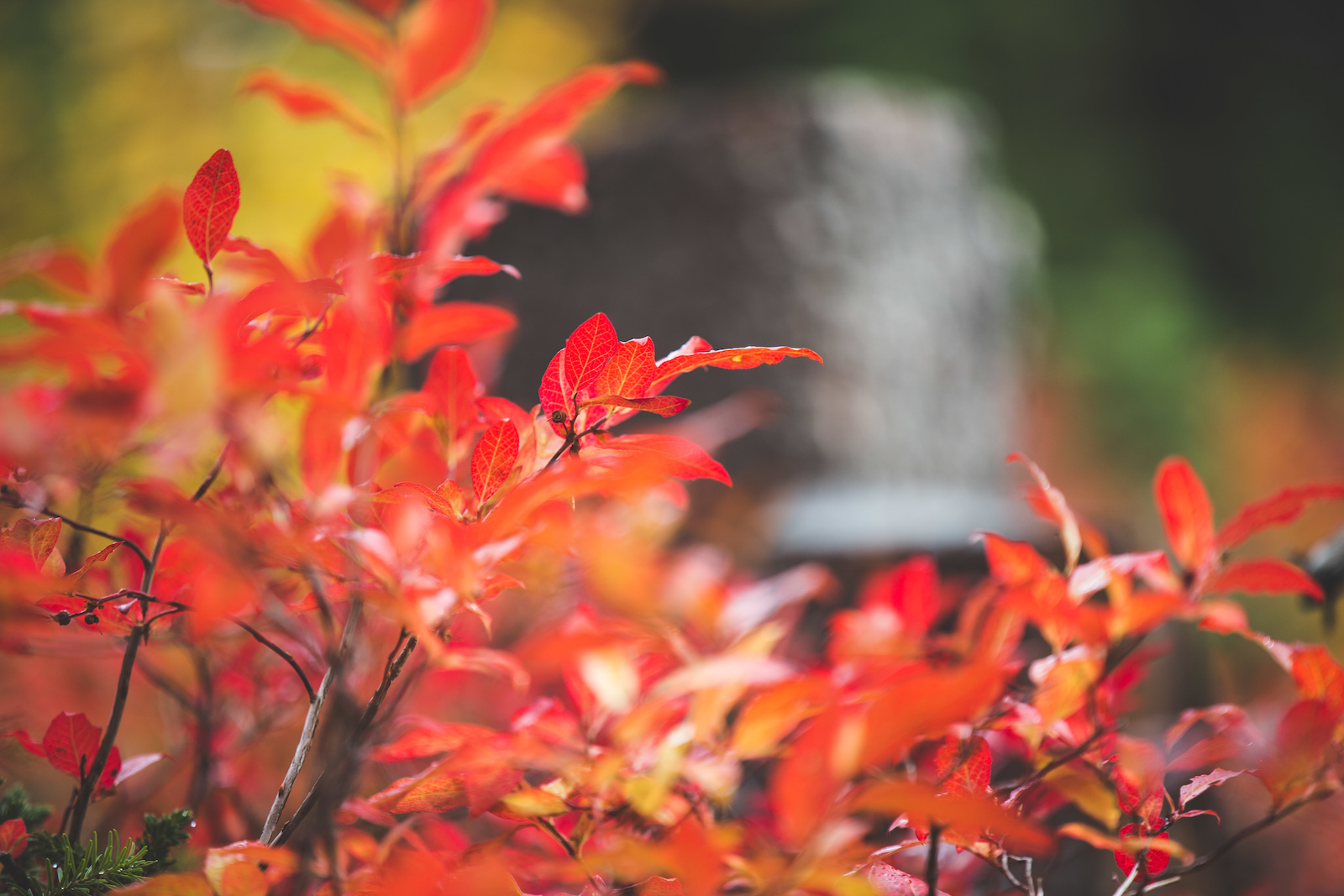 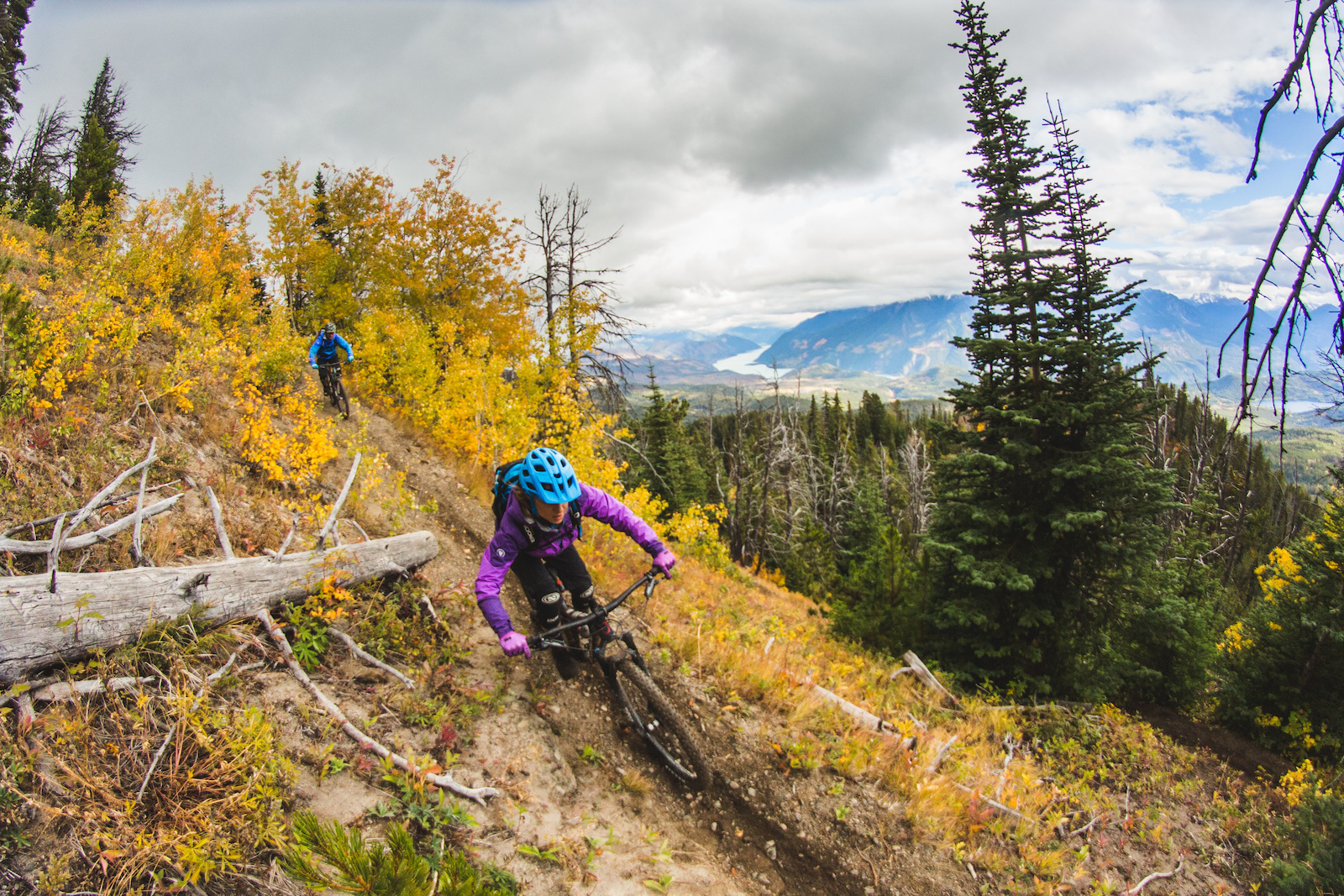 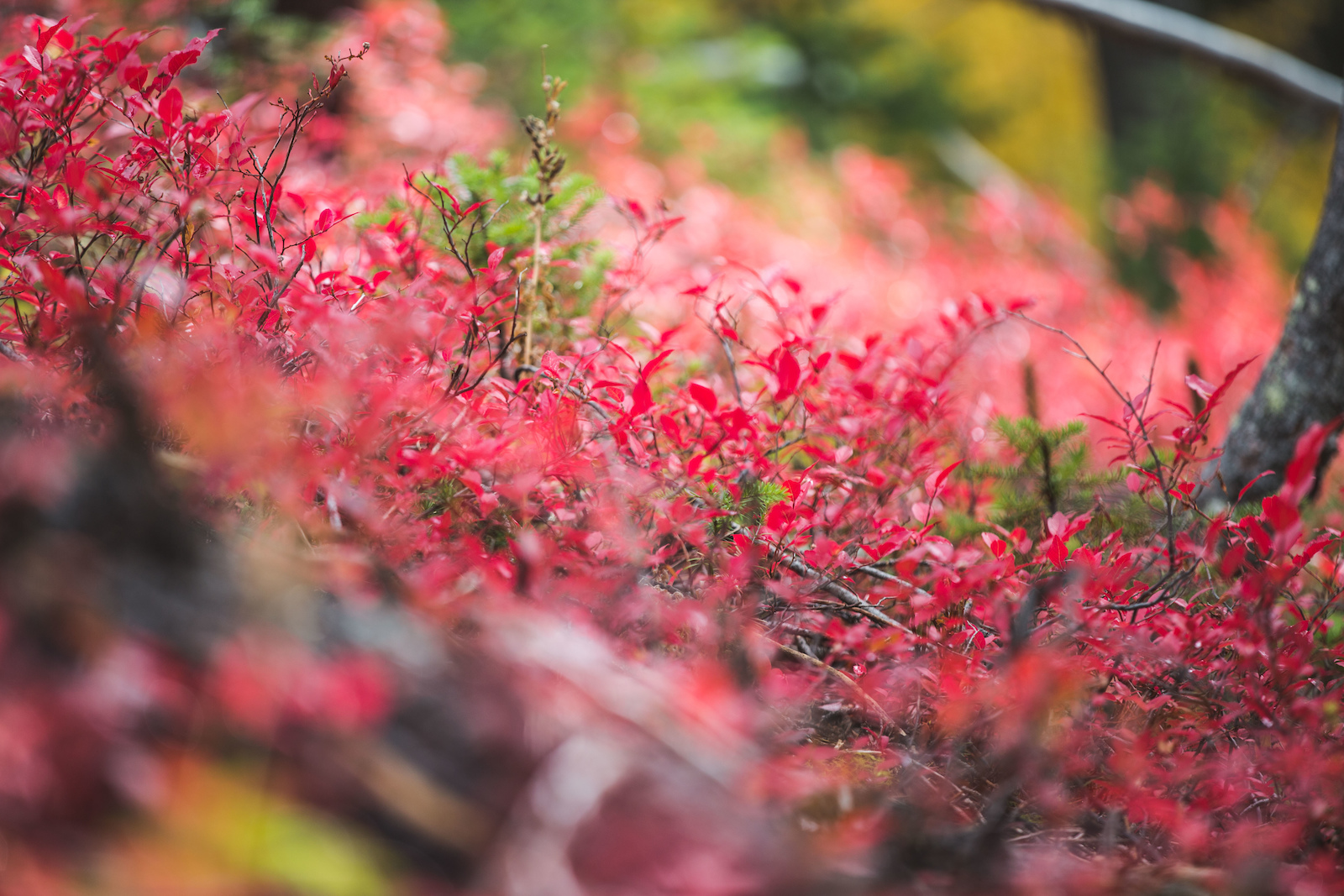 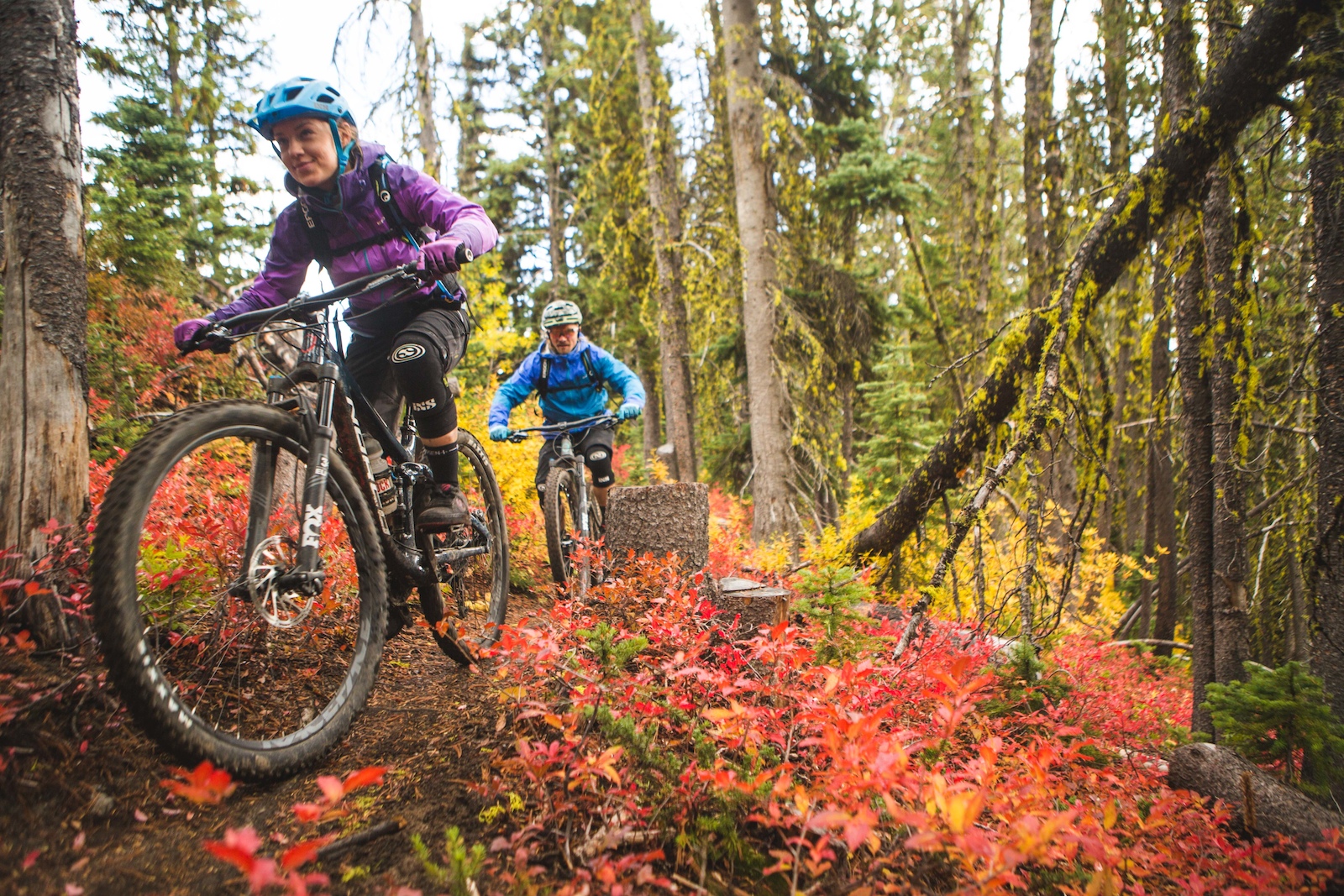 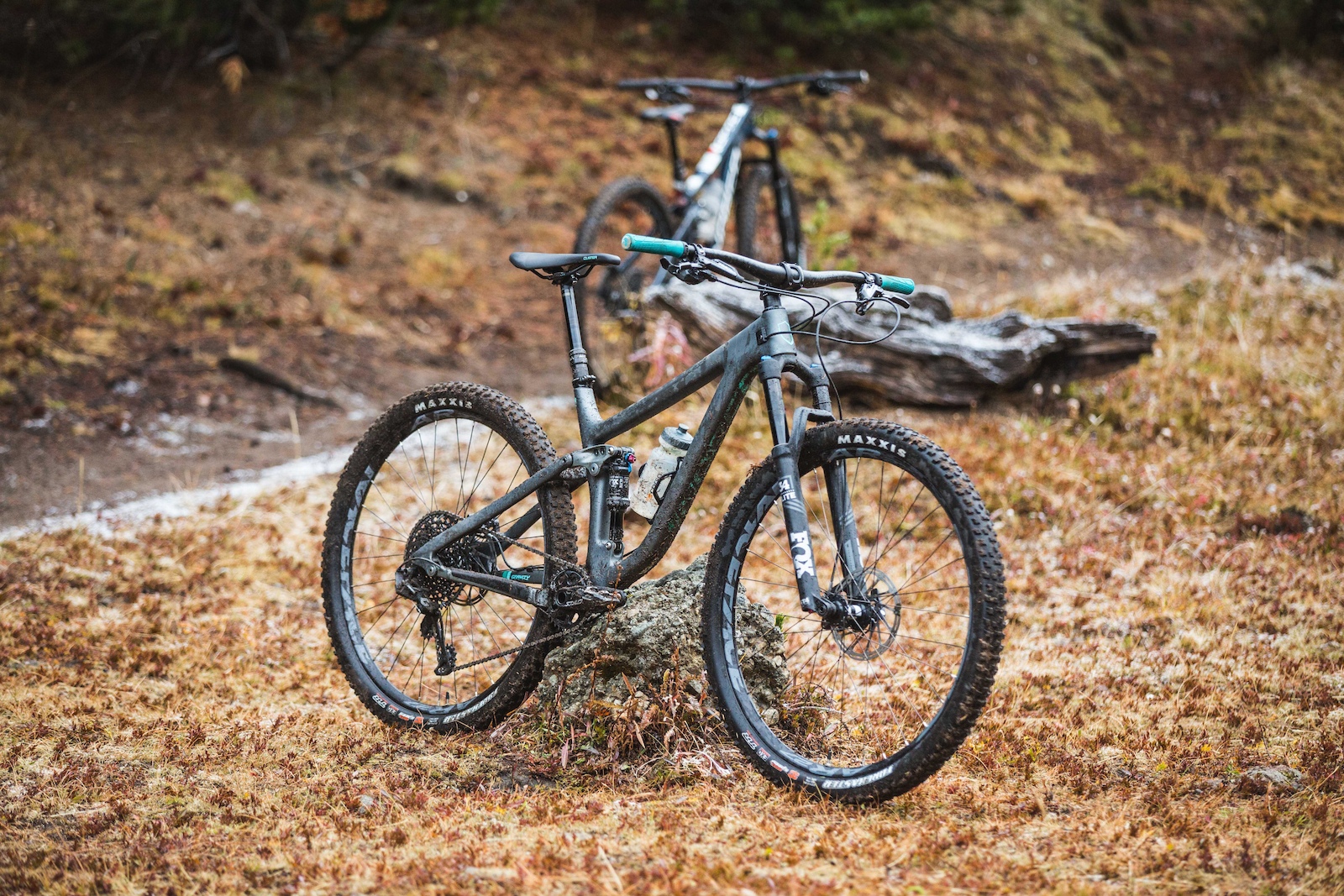 Someoldfart (Oct 17, 2017 at 19:33)
Gotta watch the weather though. I went around this time of year I think in '98. We had snow above Tyaughton where we camped but it was not rideable a little way up. Apparently rim brakes ice up when fresh snow is deeper than your rims. Pretty exciting.

nprace (Oct 18, 2017 at 2:30)
Super cool! Just wrote my wife to put this on the bucket list! Wow those trails are bmx tracks compared to the just about anything in the alps...there's a reason we all ride 170mm enduro bikes...ooops sorry...mini DH bikes...

leelau (Oct 18, 2017 at 7:34)
@nprace be aware that the circuit of trails closer to the Spruce Lake area ( the low hanging fruit if you will) is like this. But if you get a bit farther out towards Lorna Lake the trails will get rougher and more Graubuenden-like.

Also its a marketing video so of course the hours of pushing uphill are omitted. But it is fantastic and there is a remarkable lack of chue scheisse. Use Tyax's network of hut to hut and it will simplify things fyi

wilsonians (Oct 18, 2017 at 8:14)
I was up there in September and its incredible. They did completely omitted the fact that the slog up to Windy pass is mostly hike-a-bike and a couple hours long. But the riding is amazing, definitely a bucket list trip for sure.

whatyousaid (Oct 18, 2017 at 8:24)
@leelau: yeah for sure a marketing fluff video...the Chilcotins are brutal, and all these float plane videos leave out the MEGA hike-a-bike sections...trust me you will be hiking your bike A LOT.

I pedaled up to Spruce lake via Gun Creek Trail then High Pass and down Licks for a huge loop and full day of riding, no plane needed. This was an 8 hour round trip with a TON of hike a bike.

The Chilcotin range reminded me a lot of riding in Colorado, the remoteness and wilderness is pretty cool though. Stock up on Food, Snacks, and Beer before you leave from the town of Lilooet because there is NOTHING out there.

There is 1 small store in the town of Gold Bridge but they open late and close early. There is also a ton of free camping if your looking to do a self supported trip without all the expensive lodge/float plane stuff.

wilsonians (Oct 18, 2017 at 8:32)
Oh and we did ours self supported for camping and food, but did the float plane one day. If you do the float plane with 4 people its only like $125 per person which really is not bad and well worth the cool experience.

gramboh (Oct 18, 2017 at 11:23)
Tyax Adventures are good people. Had my first taste of the Chilcotins with them on a multi-day this past August. The lodge itself is super plush (heli ski lodge) with great food and facilities (hot tub, steam room, sauna, spa/massage). Guides are great people and the float plane experience is cool. Riding and scenery are amazing.

You can certainly ride self-supported or just get a float plane/truck bump, which is what we will do next time, but I wanted to give them a plug... it's amazing value compared to what you get for heli/cat skiing in the winter.

mdhorner (Oct 17, 2017 at 19:08)
Goddamn this makes me wish I wasn't injured. Best memory of this summer was chasing friends through the meadows on Lick.

jamesbrant (Oct 17, 2017 at 19:34)
i was wondering when the last quarterly installment promo for the Chilcotins would break, and here it is.

rooster69 (Oct 17, 2017 at 19:26)
First rule of ride club....don't talk about ride club. Why does everyone feel the need to advertise what they've ridden...nobody cares and matching your gloves with your jersey...seriously lol