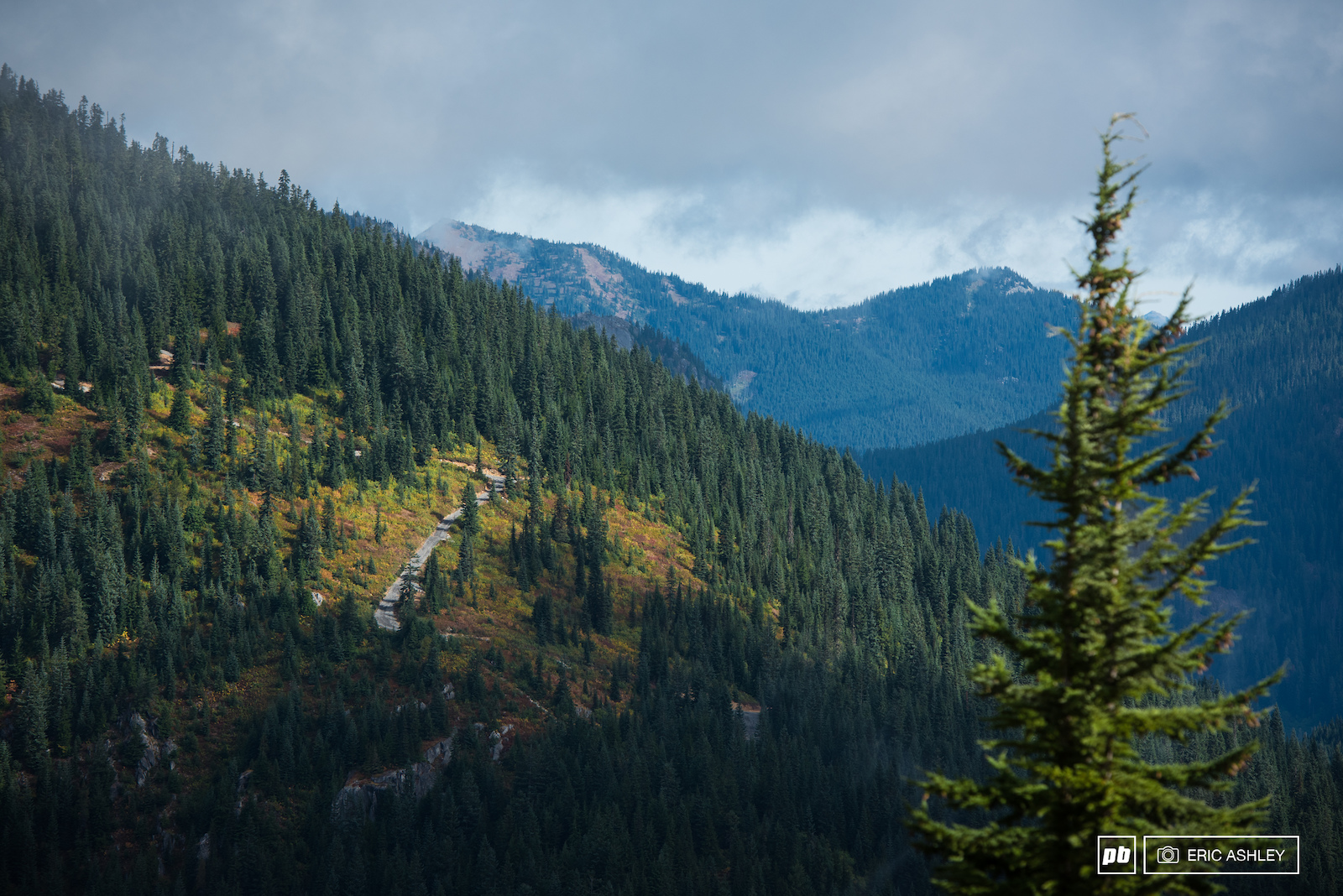 By the end of the season, it feels like every year of racing has rushed by in a blur of spinning wheels, fast laps, good company, and the occasional spill off-course. Stop seven at Stevens Pass Bike Park brings an end to a fantastic year of racing, and a close to year ten of the NW Cup. A year that featured a new venue with Tamarack Resort, a number of record turn-outs, and some mighty fine racing.


This season has been a bit rough in the northwest with what seems like a new fire blazing every week. The series has only been touched by drifting smoke fortunately, but it's a reminder of just how lucky we are to have such a vast playground to enjoy and how fragile it can be. That's why the approach of fall feels extra good, if it means some moisture to bring back tacky trails and put an end to all the fires raging around the area. The start of the weekend came with a smoky hint, but a healthy dose of mist and light rain cleared the air and finally did a little to at least cut the dust. By Sunday, the sun was back and the skies were clear, brining the typical great climate of a fall weekend at Stevens Pass Bike Park.


Courses were similar to Round Six, with Cat 1/Pro on Berserker and Cat 2 racing the traditional Slingshot Wookie. Cat 3 switched things up a little by descending Rock Crusher to Piranha Bird. All three course were dry and dusty, but Berserker in particular was rough with loose corners, deep holes, and a general character that knocked riders around. That didn't at all stop racers from turning in a fast time and good results.


A steady mist rolled up before seedings got underway on Saturday. Despite, or because of this, riders were no nonsense getting to the bottom. All Out Racing rider Dylan Brown seeded first for Juniors. Followed by Layton Meyers, Declan Ervin, Ethan Lieb, and Gideon Bender. Pro Women had an unexpectedly small field with just two competitors. Kialani Hines took the lead ahead of Kerstin Holster (defending 2016 overall winner Jaime Reese was out for the weekend to attend a wedding). Current series leader Carson Eiswald went OTB during his run and cleared the way for Weston Potter to lay down the top time of 2:28.36. Less than a second behind him was Jason Eiswald, who finished ahead of Torsenn Brown, Luke Stevens, and Kasper Dean.


The mist stuck around through the night and into the start of practice. There really wasn't enough saturation to be tacky, but conditions did get better. Although, it made for an interesting combo of dusty corners and wet bridges. Pretty soon, the sun was blazing and the temperature climbed. The NW Cup's new timing system was working smoothly and got Cat 3 racers off to a very timely start down Rock Crusher. The flow and jump trail adds some pedaling to the course, but it also handed out a number of flats and at least one crash to keep racers focused.


As the day progressed, Cat 2 racers screamed down the time honored Slingshot Wookie. The rocks really have been impressively exposed over the years for a technical course that clearly identified who was a cut ahead of the rest for speed and line choice. Berserker took Cat 1 racers through the paces and handed out its share of carnage. Rising to the top of Juniors for the second time this year was Declan Ervin. Behind him came Dylan Brown, Gideon Bender, Chris Wharton, and Ethan Lieb. Layton Meyers got thrown off the hunt after colliding with a tree at the bottom of the course. Carson Eiswald delivered his third win of the season and handily took the overalls. Steps two through five were claimed by Luke Stevens, Weston Potter, Jason Eiswald, and Nikolas Clarke.

Check out the full results.

See how the overall standings wound up.


All that was left to put a wrap on year ten was to raffle off some prizes and run through the podiums. Providing all the smiles and cheers was a group of people who have made the series so successful over the last decade, and will continue to do so in the future. “It’s kind of like a little family that travels together now. It’s so fun, we love it to death," says Scott Tucker about his favorite aspect of putting on races. Partner in crime Casey Northern echoed him with, "After ten years, you’d think you’d be over it, but with the huge growth of families and participants and everyone being so stoked, it really makes it worth while!"


If you haven't had a chance to join the NW Cup family, the season may be over, but there's still a chance to see what it's like with the upcoming Cascadia MTB Championships at the end of the month. "Held on the hollowed ground, that is Dry Hill," according to Northern. The on day Enduro followed by a day of downhill is designed to get riders their final racing fix for 2017.

Looking forwards to next year, Scott and Casey left for a week of venue scouting the day after finals to see what new stops the can add to the mix. We'll see you there, in 2018. 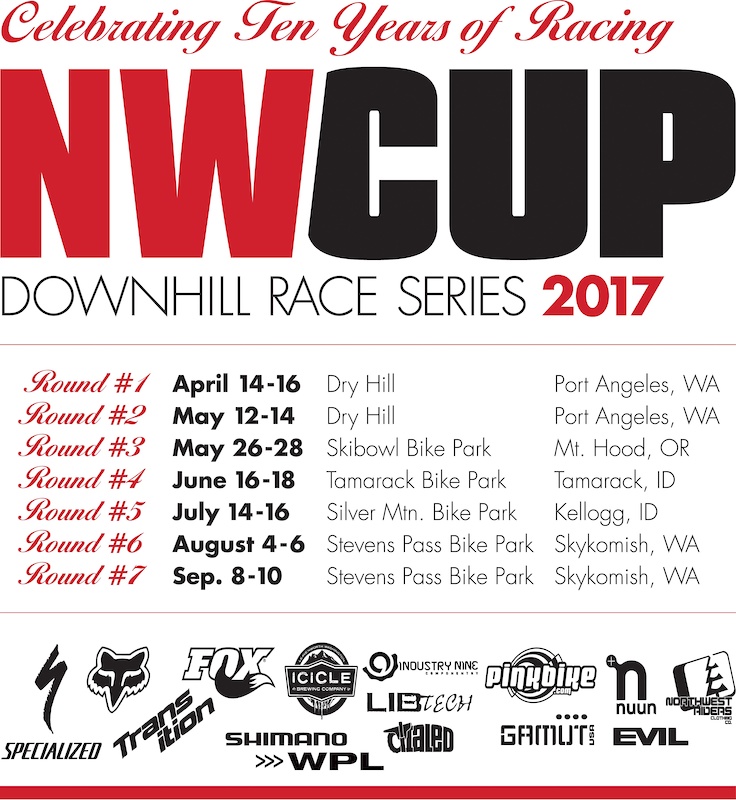 johnnygolucky (Sep 12, 2017 at 21:56)
No.
While there are a few hills for riding mountain bicycles, the town itself is a degenerate cesspool of inbred bowleggers. Crime is 148%. Unemployment? Yep. And syphilis and gingivitis are so contagious, you contract it just by standing in the mile long unemployment line. My plea to all those I hold dear on PB, is to stay in a town that offers more than the misery that only Bellingham can muster.
Pray for us.

thustlewhumber (Sep 13, 2017 at 7:14)
@johnnygolucky: Lol, basically the same thing we say to keep people out of Spokane

jdelasalle (Sep 13, 2017 at 8:28)
It's pretty sad at the fact that I spent $1000.00 + and a $75 registration fee to get to this event and the announcer can't even get the location for where I was from correct. I even ask the organizers if they could fix it and he still got it wrong. Most likely won't be going to one of these events again.

wes140 (Sep 13, 2017 at 9:43)
Yep just like when someone miss pronounces my name I immediately cut all ties and vow to never speak to them again.........these are great events and are harder to organize then any of us riders can imagine so i think some slack should be givin when it comes to something so small.

jdelasalle (Sep 13, 2017 at 10:04)
@wes140: Miss pronouncing names is one thing...I get that! And getting the location where someone is from is another thing... I get that too! However, politely asking them to just change it is definitely not asking much and they don't care... we'll that's something totally different. Oh well!

happymarmite (Sep 13, 2017 at 10:27)
@jdlsalle: dude who cares if the announcer messes up where you're from, no one is listening to the guy anyways and no one cares. NW Cup kills it on race organization and they put on world class events. Don't bash them for something so dumb

happymarmite (Sep 13, 2017 at 10:57)
@jdlsalle: didn't mean to come across as a dick. Good on you for admitting I was right and owning up to the mistake. Have a good one mate

olympicdirtsociety (Sep 14, 2017 at 23:19)
Sorry about that. Where are you from? Casey is usually pretty good at stuff like this so I'm a bit surprised. PM me if you want to chat more about it. I am curious what happened and hope you give it another try.
Scott