Off the Clock || Four Corners 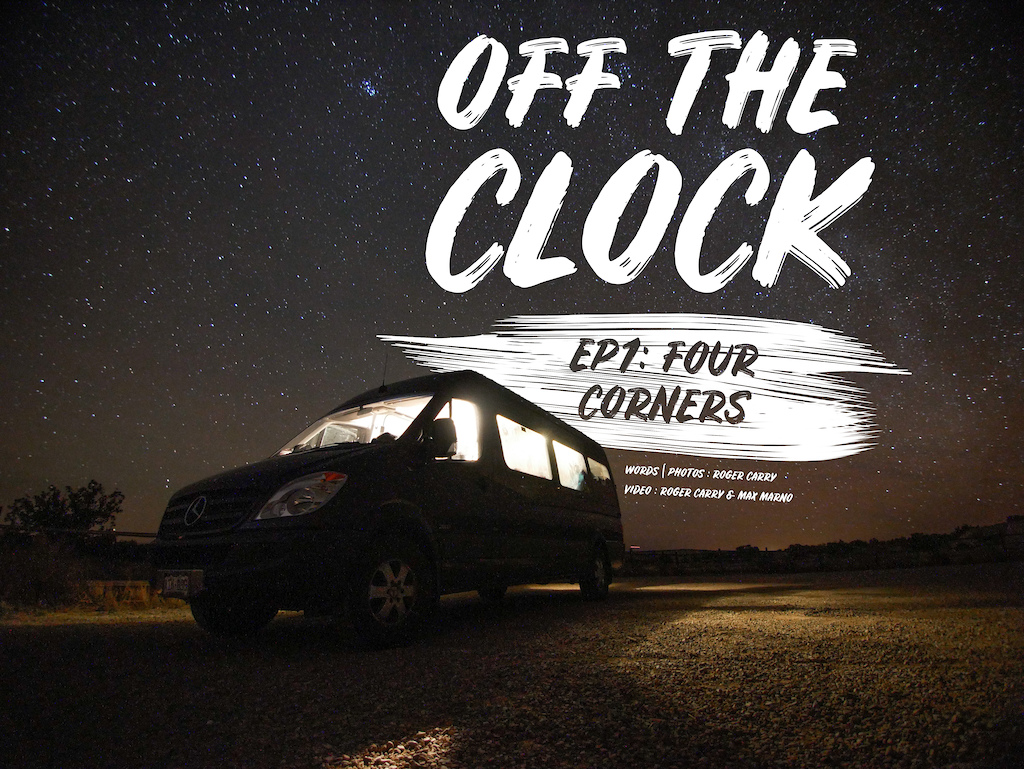 It’s had its draw since we were kids stuck in school and continues, to this day, to be the light at the end of the tunnel that is each work week. For many people, the weekend is a chance to ice down Coleman coolers, barbeque great food and watch football. For mountain bikers, it represents a golden opportunity to ride new trails, experience new places, and enjoy the outdoors before the looming call of the office returns on Monday morning. For most people, 48 hours isn’t enough to experience the dream trips that they see popping up on Pinkbike every other day and are forced to settle into familiar trails and monotone routines. We decided we had experienced enough familiarity in our weekend routine and rolled the dice on an ambitious 48-hour trip we thought might be just crazy enough to be fun. This was our adventure. 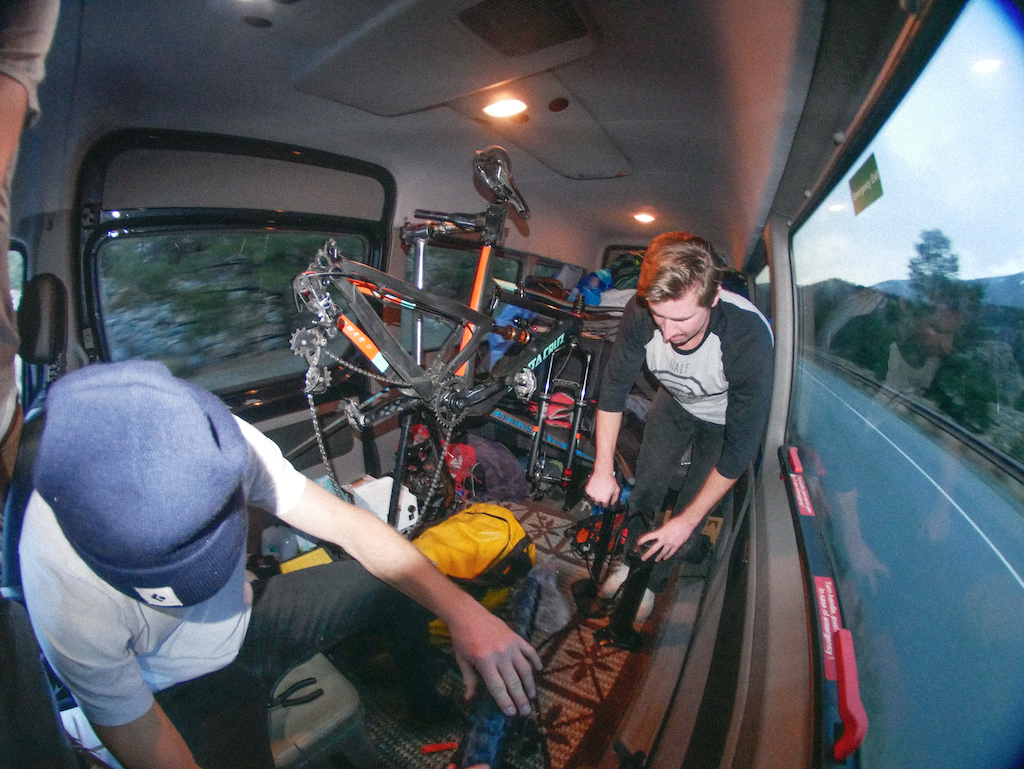 Salida, CO
With lofty goals and a very non-specific plan of riding all four corner states within 48 hours we knew it would smart to check off our home state of Colorado as quickly as possible. The forecast looked grim all week for Salida but we decided that if we wanted to spend all Sunday in Moab we might have to suffer through a snowy first ride Friday night. 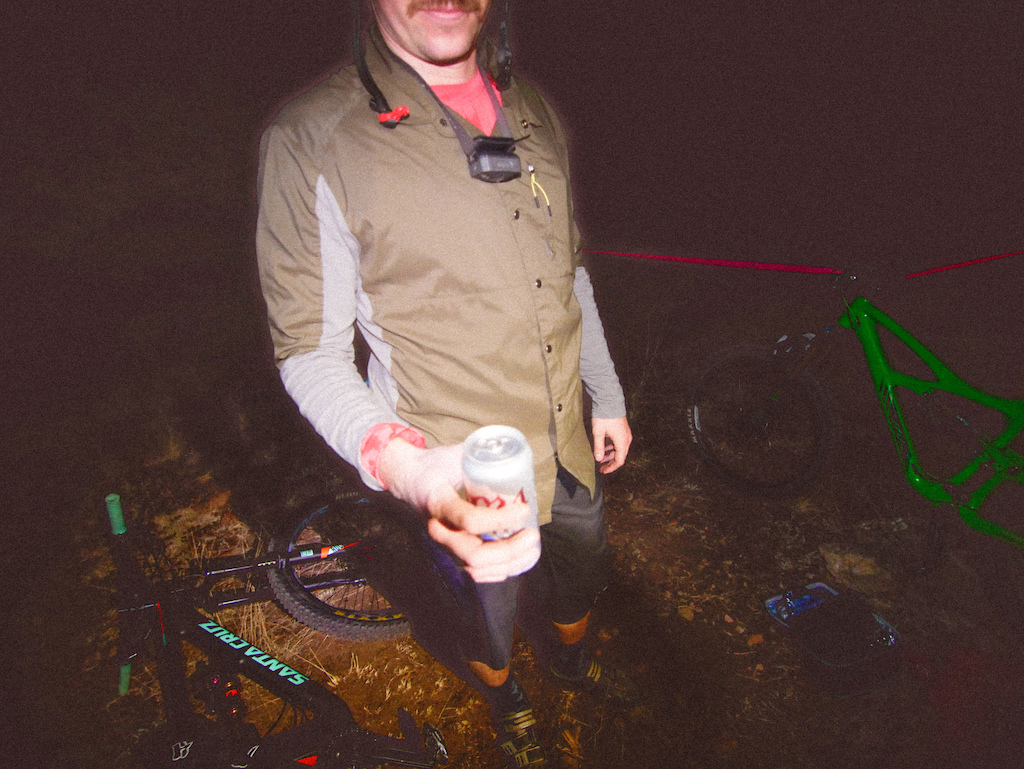 Like responsible adults, we all worked hard early in the week so we were able to leave work early Friday afternoon (and if my boss is reading that’s exactly how it happened). We hit the road and after a small snowstorm, we made it to Salida by 5:30 pm. Since our attempted in-car tubeless install failed we stopped in at a local bike shop to make use of their air compressor before firing up the headlamps and hitting the trails. 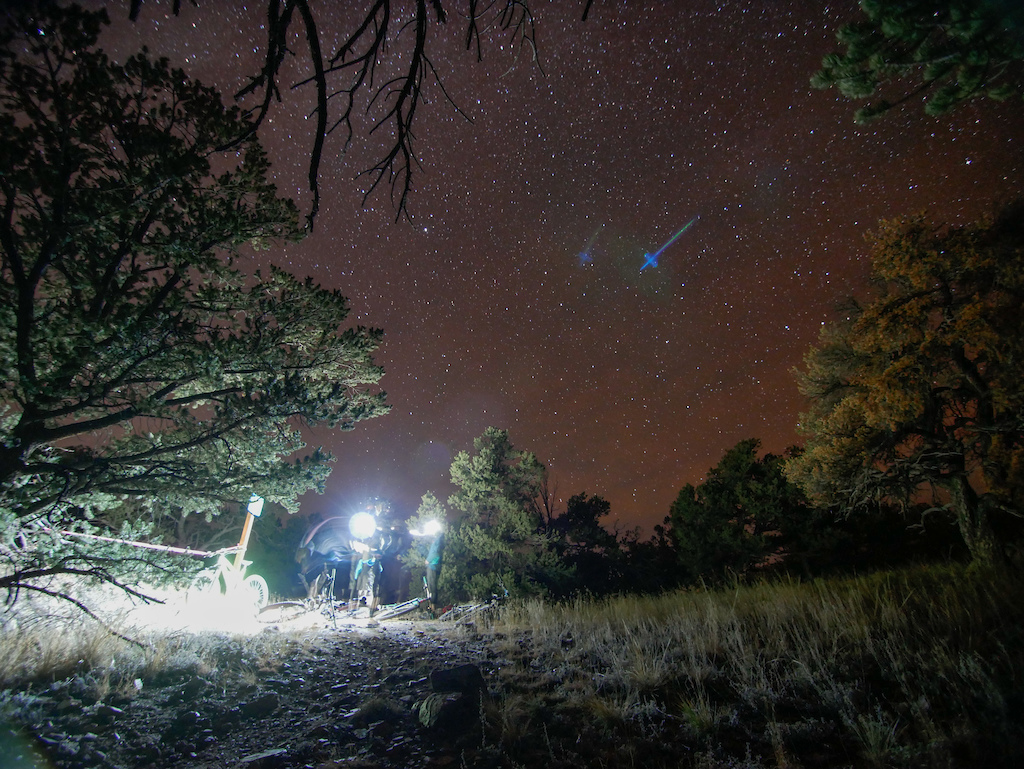 Our plan was to ride “Uncle Nasty” a supposedly technical trail that Max and Nelson had ridden one week prior. After what felt like a longer climb than it actually was we summited and gazed upon the small towns lights blanketed by a clear sky filled with shining stars. With four quick cracks, the summit beers were open and were quickly gone before starting our dark descent into the valley below. Crawling over rocky features and optimistically sending small drops we wound our way back down to the parking lot to continue our journey. 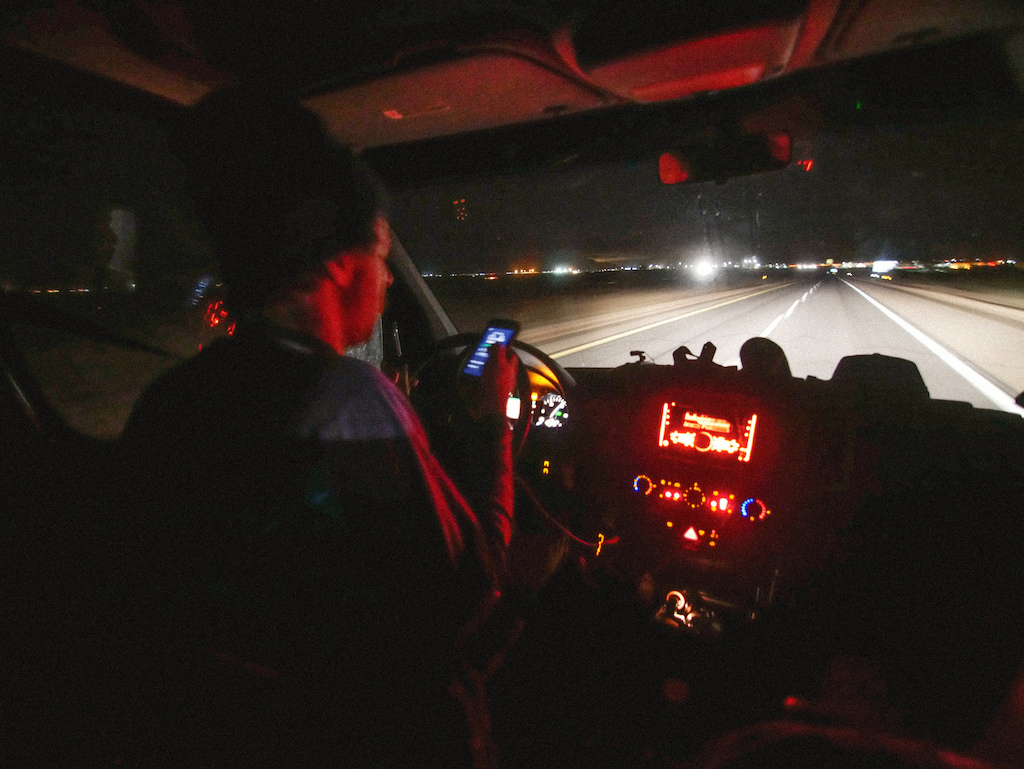 And as if Mother Nature herself had been holding out for our ill-advised plans the snow rolled in right as we were rolling back to the car. It didn’t concern us much. We were off to New Mexico. 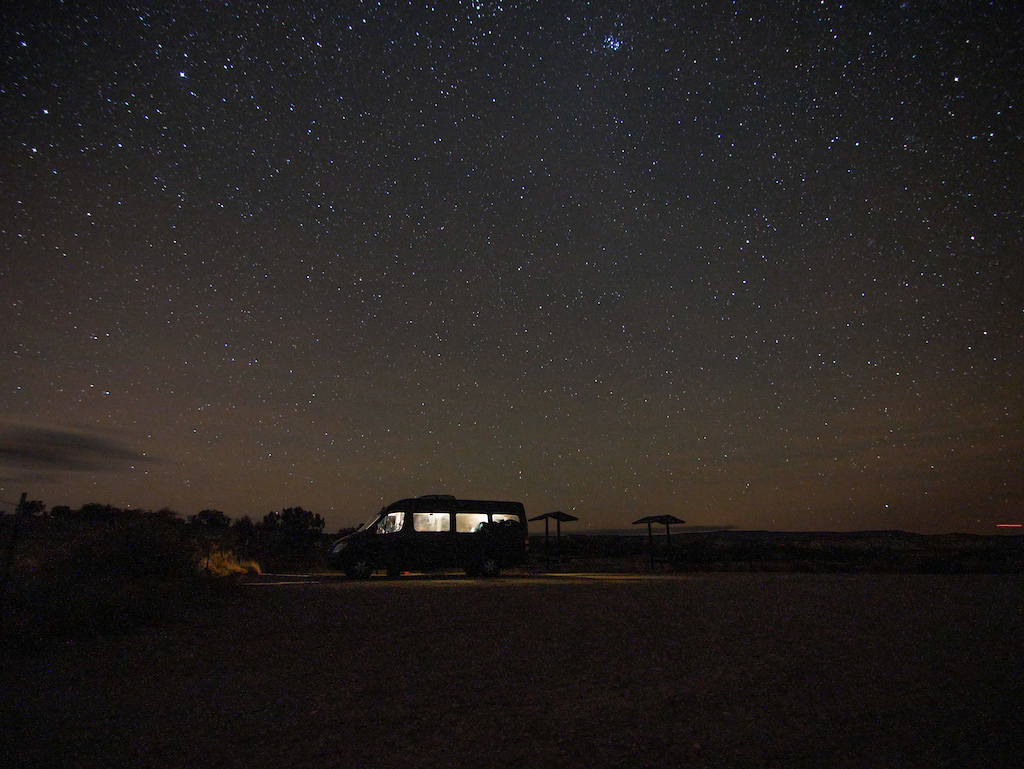 White Mesa, NM
The drive from Salida had been anything but pleasant. Five hours of snowstorms, bad drivers and gale force winds were enough to put everyone on edge but we all let out a sigh of relief when we pulled into the White Mesa parking lot at 2:30 AM Saturday morning. The relief and relaxation felt all too short lived when alarms started to buzz and ring a short three hours later. While we were probably moments away from turning the alarms off and simply going back to sleep we managed to muster enough energy to layer up and hit the trail just as the sun was creeping its way over the horizon. 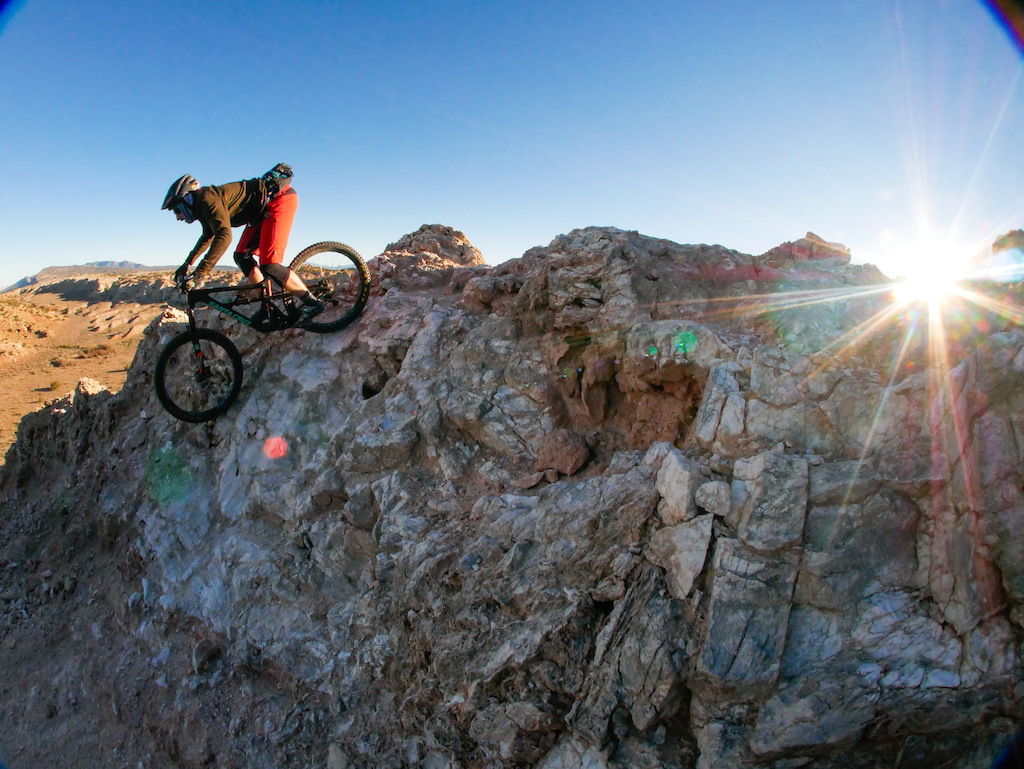 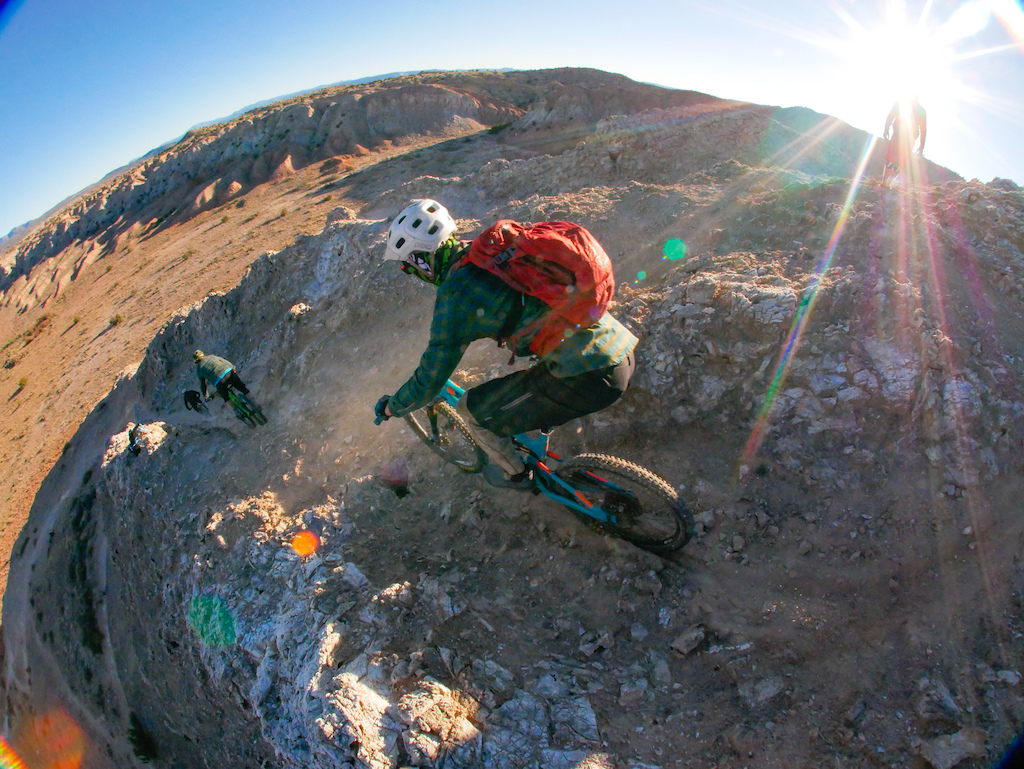 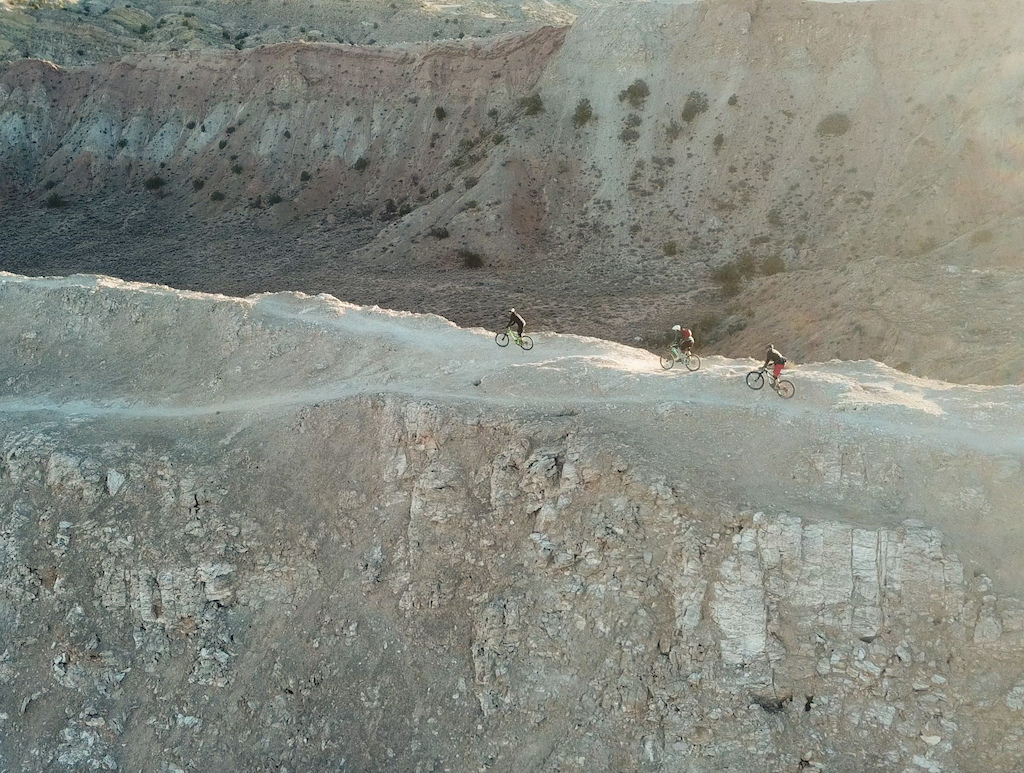 The landscape and riding could not be more of a contrast from the night prior. Trees and rocks were replaced by dry dirt and ridges and our childish imaginations conjured thoughts of Red Bull Rampage events although our lines lacked where probably just one or two degrees flatter. While we couldn’t seem to get enough of this new unique terrain it was in the back of all our minds that if we were to complete our mission we would need to hit the road at some point soon. So, with each of us taking one last look at the white paradise, we pedalled back to the van and whipped up some bacon and eggs before starting the next leg of our journey to Arizona. 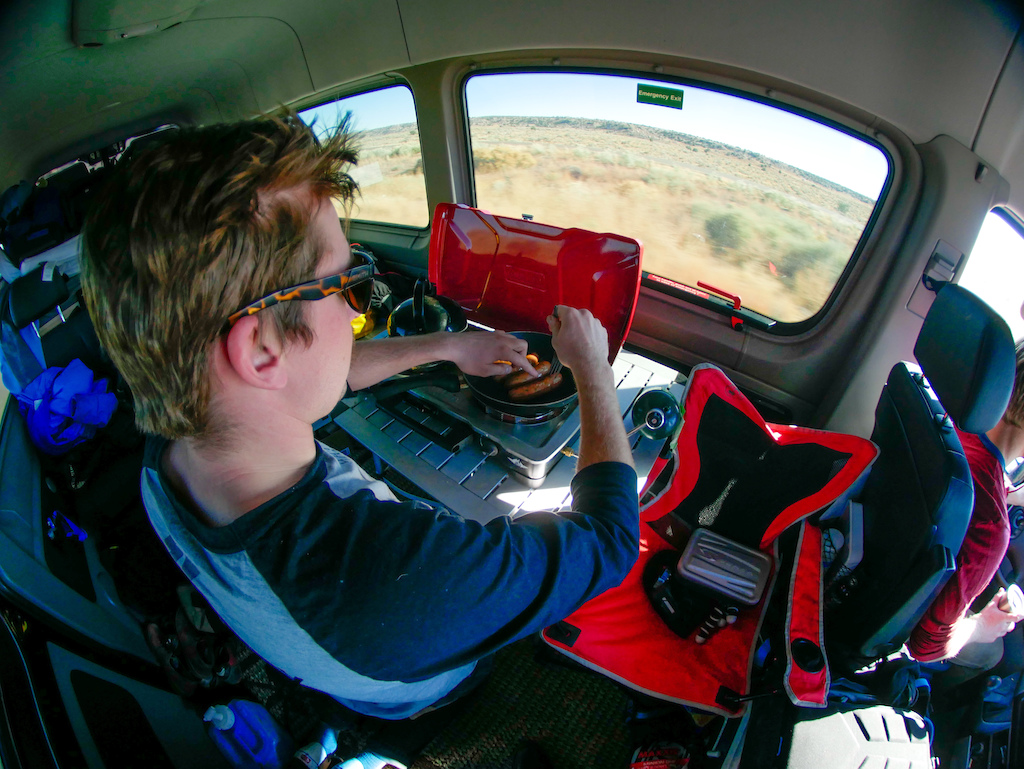 Flagstaff, AZ
The drive from New Mexico to Arizona came at a time when motivations hit their lowest point on the trip. With 10 hours of driving and seemingly endless hours left we started to wonder if we had bit off more than we could chew on this adventure. We even got to a point where we discussed scrapping the rest of the trip and driving down to ASU for a football game. 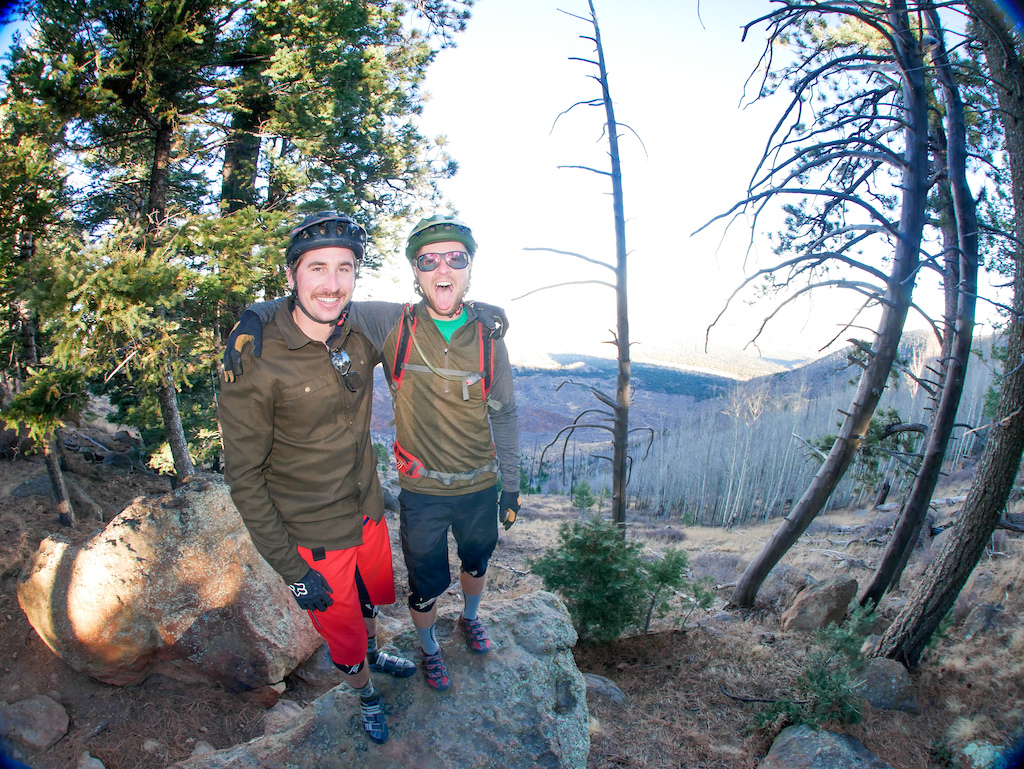 Luckily for our mission, the Sun Devils were in Oregon State that week so we pressed on to Flagstaff. With none of us ever setting foot in Arizona before we relied on the advice of Sean Horner, who had ridden with us that morning, and went to check off Wasabi and Sunset two trails that he had recommended. Once again, we found ourselves in a completely different landscape than before. The dense forest filled with Ponderosa pines and the lush dirt felt like a welcomed change after hours of barren highway. 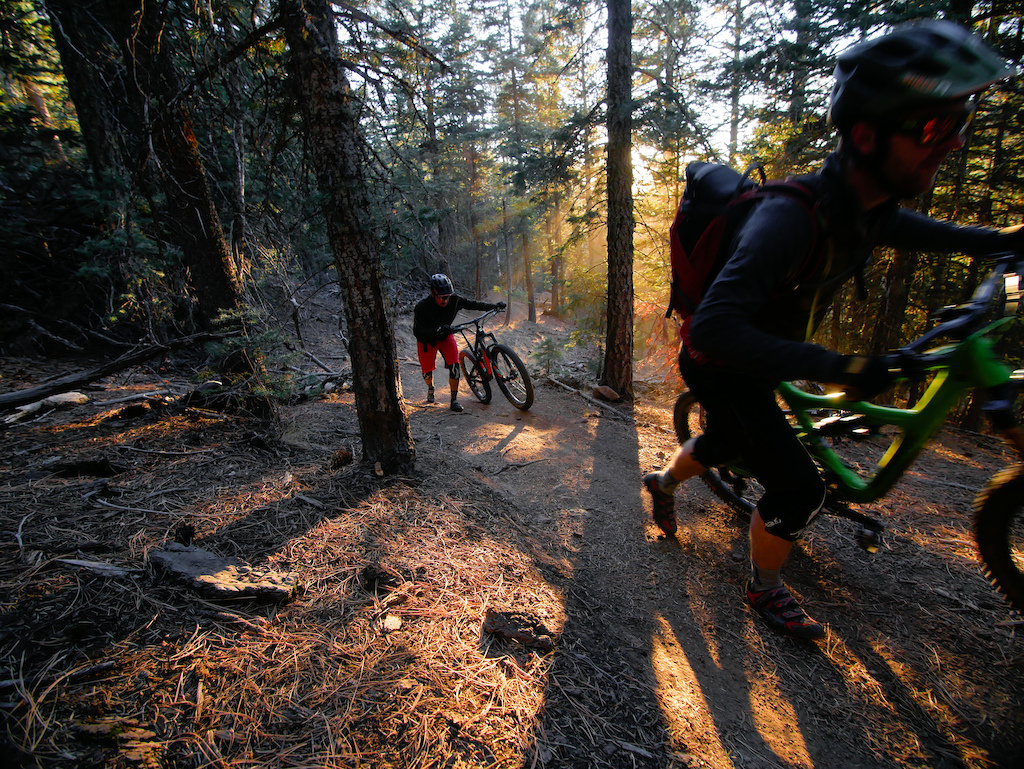 As advertised, the trail was phenomenal and filled with features and berms it would take months to build on the Front Range. Needless to say, once we started rolling we had a tough time stopping to film or take photos. After winding our way down countless banked switchbacks we pedalled back up to the top under the setting sun to where we parked our car. With a beautiful sunset under our belts and three states checked off our optimism about this trip had returned. For now. 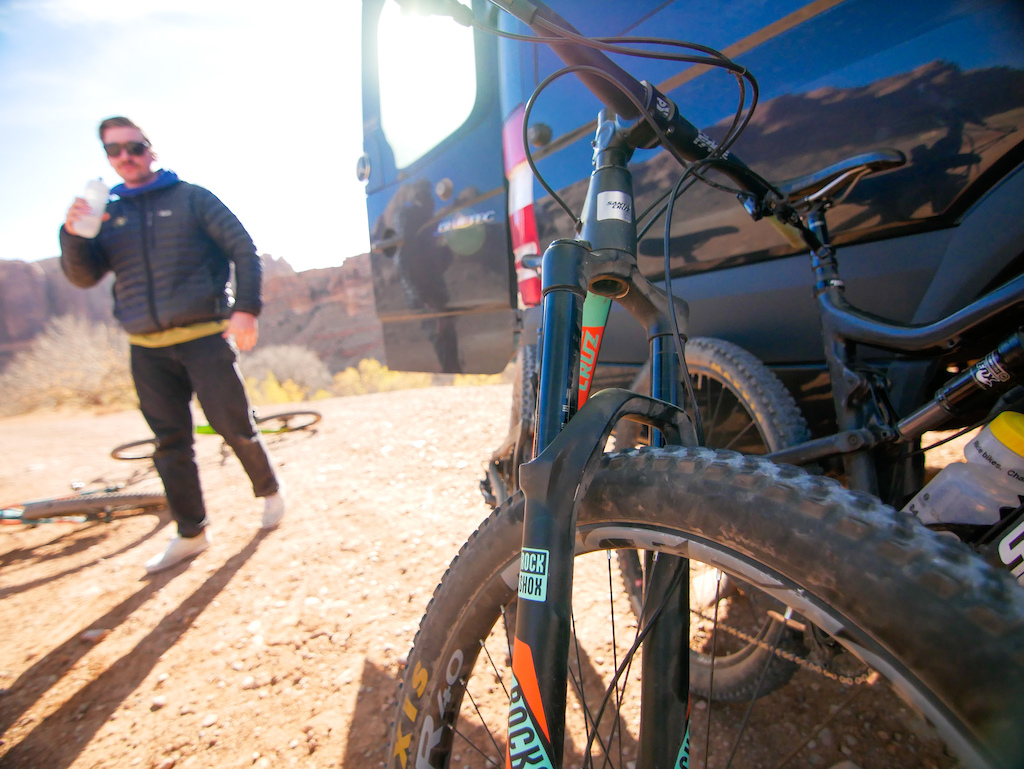 Moab, UT
We all felt good about heading towards Moab. It was familiar territory for all of us and we felt that with a full day to ride we could finally take a moment to relax. We finished our time in Arizona with a big meal and hit the road with no real plan but the idea that we would sleep on the way finish the drive early the next morning so we could have a full day in Moab. We made good time and rolled into Bluff, UT around 1:30 AM where we parked along the banks of the San Juan river and enjoyed a whole 5 hours of sleep before hitting the road again to roll into Moab at 9 AM. It was right about then when we realized our day might not go as smoothly as we had hoped. Both Cam and I needed our droppers repaired and Max had been feeling sick ever since he woke up that morning. I’ll spare the details but it was a pretty horrible day for him. Once we got out on the trail our plan was to hit Rockstacker down to Jacksons but we hit a snag when Nelson went over the bars. 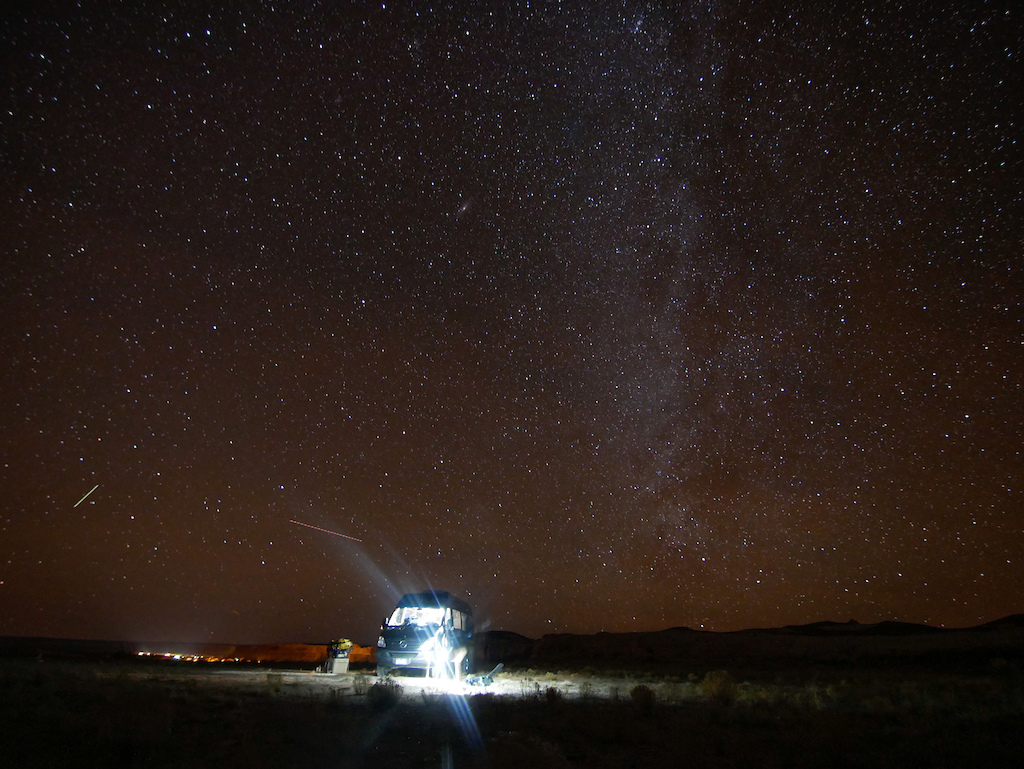 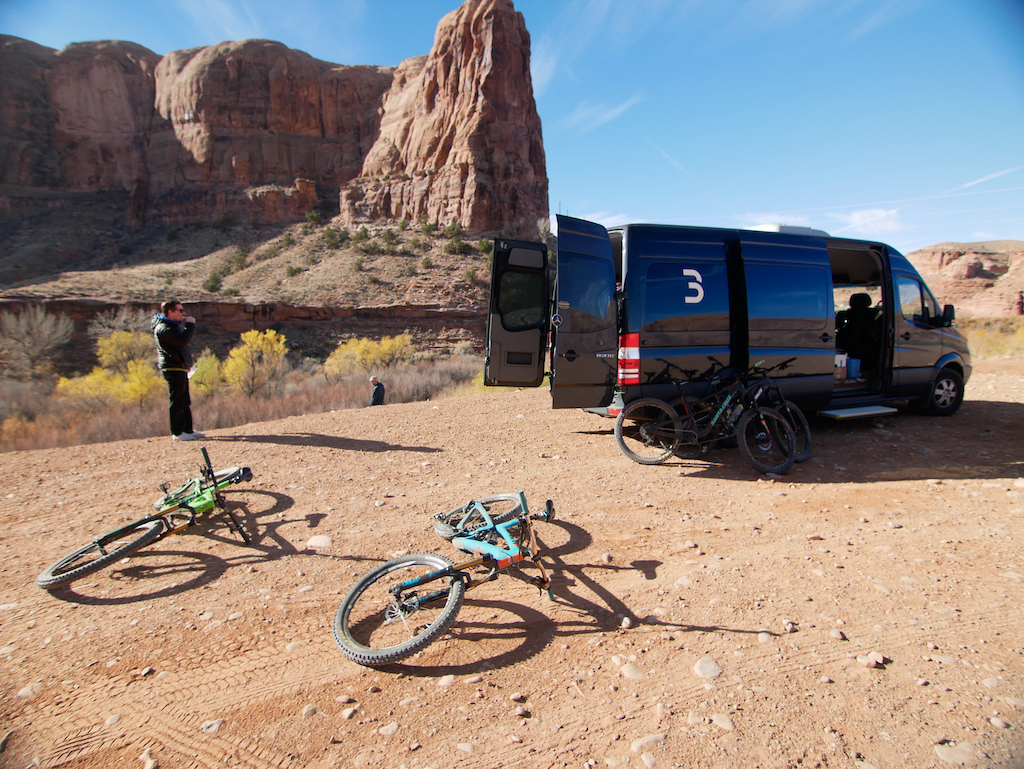 Unknown to any of us at the time he broke his wrist and elbow while simultaneously tearing his quad. Being the tough guy that he is he simply rode out the way we came with almost no hesitation. With two healthy riders and one whose stomach was about to try and jump out of his body we cut our ride short and only hit Jacksons, gathering the few clips we could. It felt like an anti-climactic end to an amazing weekend but what could we do, we were out of time. 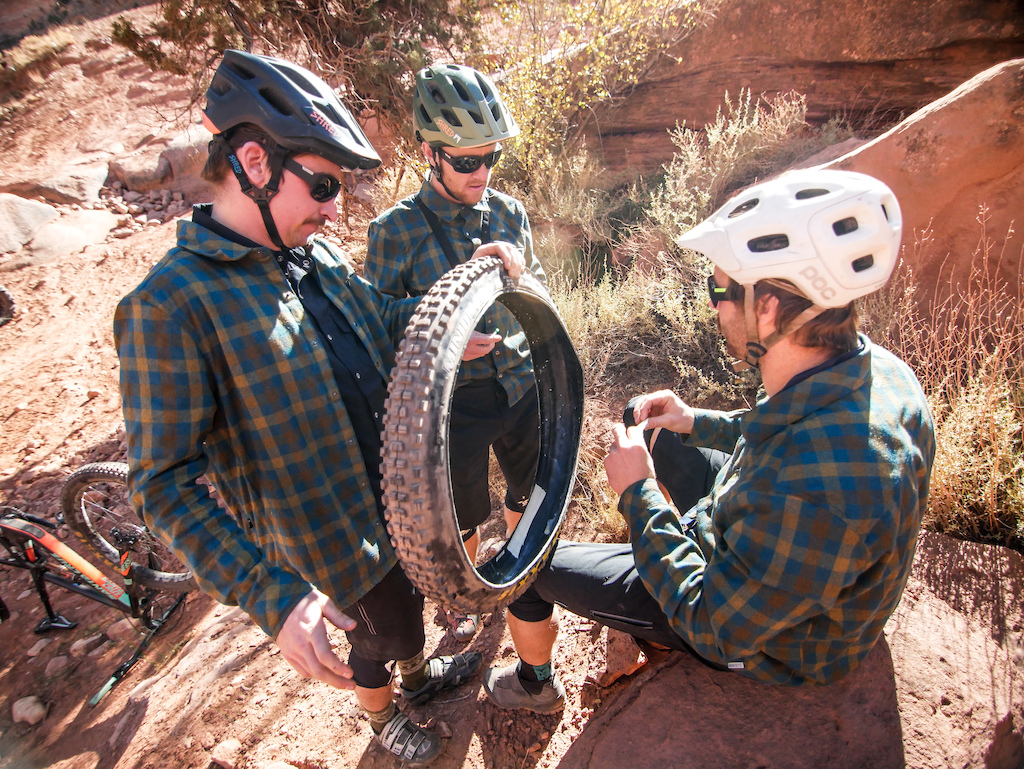 The final drive was quiet and minus a few stops on the side of the highway for Max it was uneventful. After over 1000 miles and 20 hrs of driving 6 more seemed relatively easy. When we finally all parted ways in Frisco the sombre faces turned to smiles and we all agreed it was worth it. Even as Nelson and I pulled up to the emergency room in Boulder we both knew this was only the beginning of our overly ambitious weekend adventures.

It was only a matter of time before illnesses fade and bones heal and we will be ready for the next weekend adventure.

MrReddington (Feb 25, 2018 at 23:32)
You're forgetting about the part where your mates are down a couple beers in the vehicle. To later having to fill a liter bottle with their urine.

woofer2609 (Feb 26, 2018 at 9:25)
Not to come off as a dick, but seeing as distracted driving is causing more deaths that DUI's, seeing someone going 130km/h down a highway while looking down at their cell phone kinda makes me lose a little faith in humanity, especially if there's a complaint about bad drivers in the next paragraph...just sayin'

dr-fishy-noooo (Feb 24, 2018 at 2:09)
I added this to my favourites and 'liked' it halfway through the video - brilliant stuff. Inspiring. Keen to see more like this.

fortunately I few decent places to ride within that boundary! Really enjoyed it hope the broken wrist has healed!

Jibbaman28 (Feb 24, 2018 at 12:19)
So much for the perfect crime... in and out like nothin happened. Heal up and hope you guys get back out there soon. Great concept for a weekend packed with fun. Lookin forward to EP2.

kkse (Feb 24, 2018 at 12:37)
Really great story for all us average joes that just love getting out and riding. Great music choices too by the way.

TheLongMan (Feb 25, 2018 at 21:55)
Good luck with rolling back into work like nothing happened after those last 20 seconds ahaha! Epic stuff though!