My name is Travis Kroschinsky. I am your average 33 year old ripper. There are men and women like me all over BC. I know because I see them wherever I go. I have been mountain biking and trail building seriously for about ten years. I don't go as big or as hard as I might have in my early twenties, but the crew that I ride with and I still get it done. I have also learned in recent years that "up" can be fun as well and fairly crucial to maintaining a 30-year-old semi-lumpy body. I am unsure which I like better, riding or trail building. Anyone else have heroes that include Tom Pro, Digger, Big Red Ted and local trail builders like Vance Fugeta along with Watson, Peat and the Berrecloth's? That's a bit of a lie...riding is the best. Especially when you have grooved that new corner or are comfortable enough to throw your bike around on that new hit. C'mon, most of us build to ride! 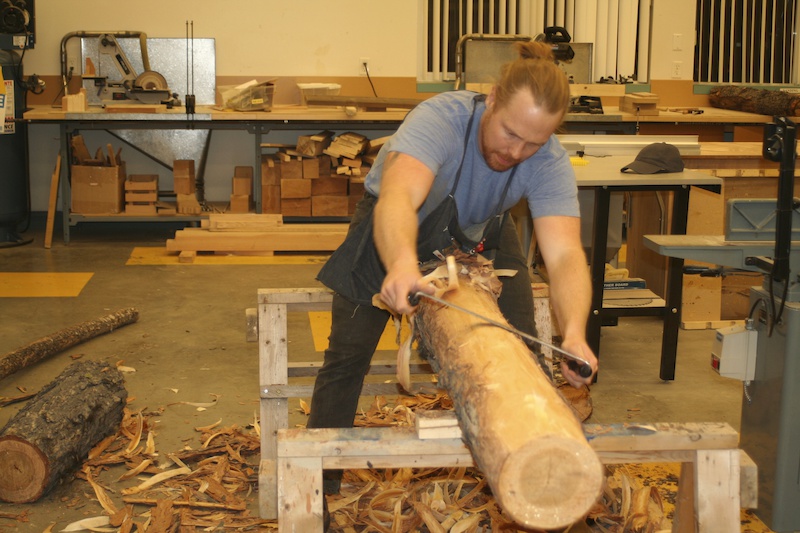 I am a shop teacher and I have started to get some of my students involved in some of my projects.

The thing about getting older is your free time gets downsized a great deal. When I didn't have anyone to answer to, there was always time. Any free moment I had, and many that weren't, were spent building and riding. Now a little boy and a little girl who need to be taught about this world take major priority over my life. That's OK. I would not trade it for the world. I love my kids, cherish this time in our lives and know that it is short.

That said, I am frustrated. Not with life but with myself. My biking has been cut but not to a point where I can't get out (things have gotten significantly better since I discovered night riding). Guess what has happened to my build time? I have selfishly neglected the trail that I have been working for close to four years now and when I have had any free time have chosen to ride rather than build. What happened to the self-realized guy that always put his time in because that is what you do to give back to the thing that you love? And it's sad because I know that between building and riding I know my talent shines more in the build department. 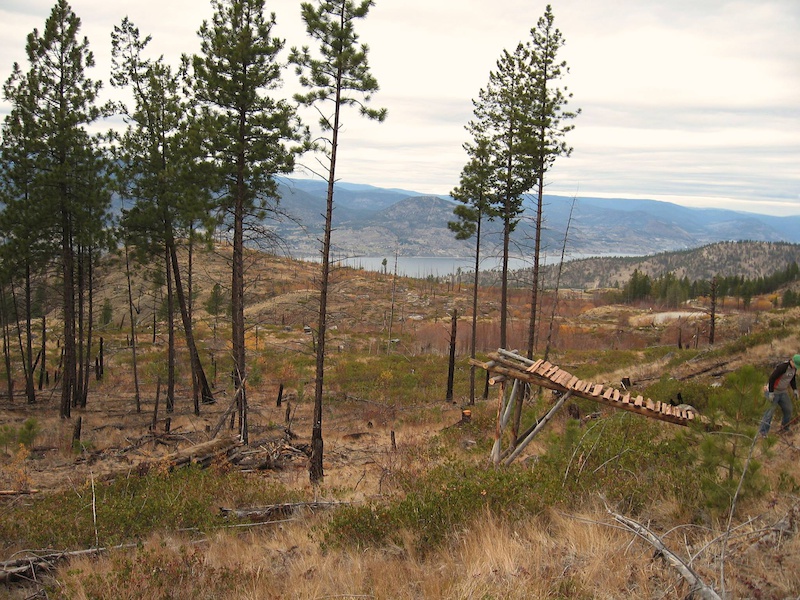 "Send it Home." A line I built a while back. Photo by Baxter Redfern

I lived in Vancouver for ten years and cut my teeth building and working on "secret" trails my buddies and I built on the North Shore. Later I improved those skills and learned more about building and maintaining trails for everyone working in the Whistler Bike Park. I have continued to build since moving back to Penticton, my hometown, about seven years ago. 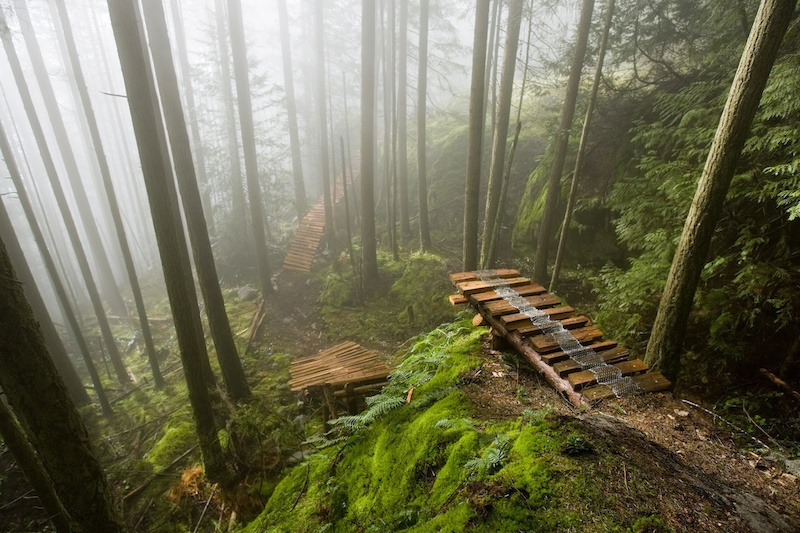 A spot I helped my good buddy Ryan to create! Photo by Harookz

Whistler trail work....taking a break. Photo on the right is from a recent project in Penticton. 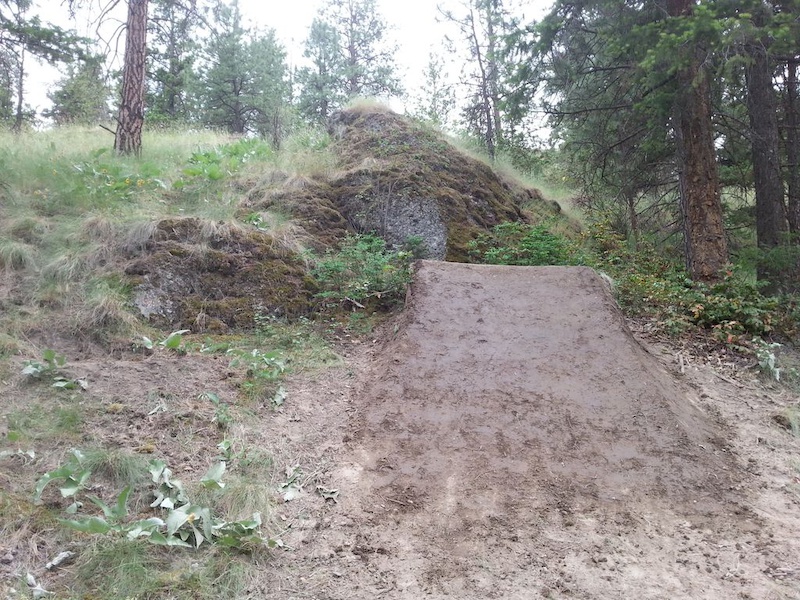 My favourite, most recent build on a trail called "Riverrun."

There are those who will scold me for telling you this, but Penticton is a hidden gem. Think of all of your favourite interior places to ride. We've got it all. And where we don't have it we have great potential for it. Things have made a turn recently but still remain mostly unregulated. Currently there are great trail networks, maintained mostly by awesome people working on their own or in small groups. We do the best we can but there is room for improvement maintaining old trails and building new ones. It shouldn't be this hard! I have decided I am taking a stand towards finishing what I started and helping the local trail network meet its full potential for all riders! 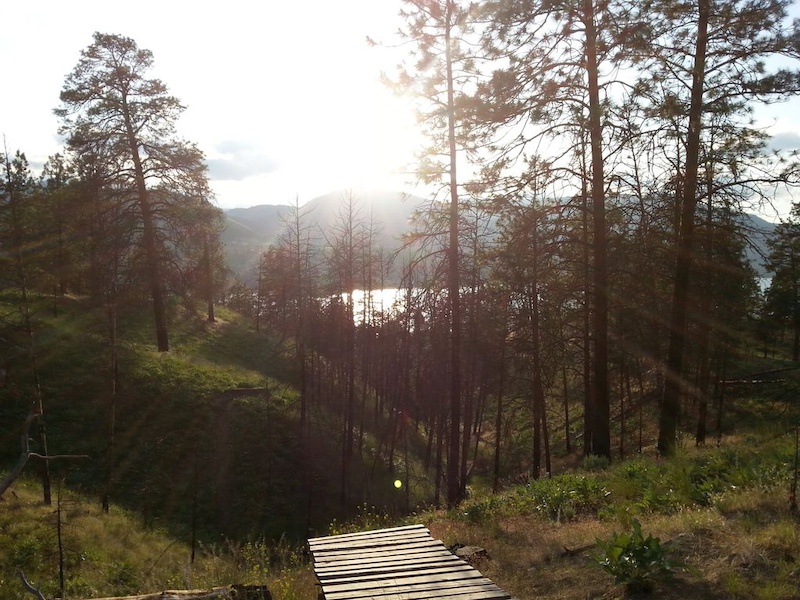 Penticton is a rad mountain bike destination. You should ride here. 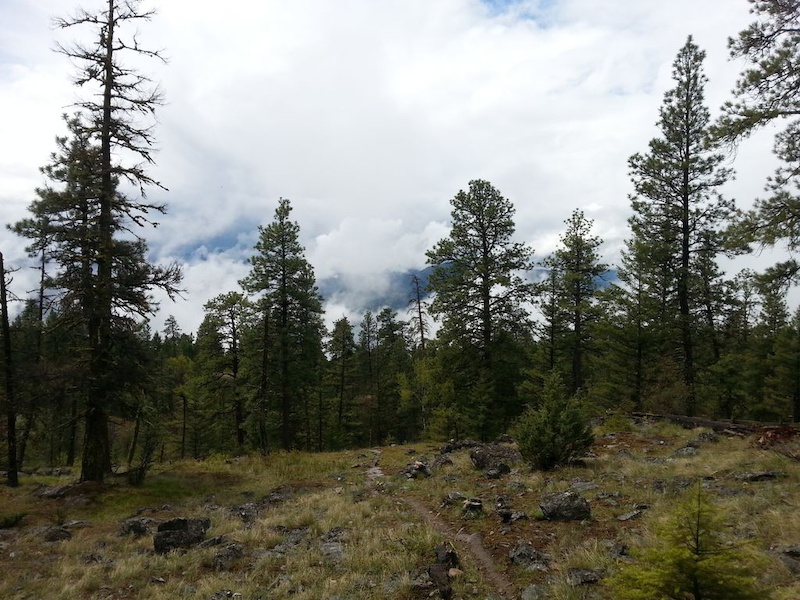 Starting October 1st 2013, for one year, I will donate all of the time I normally spend trail riding to building and maintaining trails in Penticton (if you see me on a trail bike I am getting to a build spot not accessible any other way!). Let's do the math. 52 weeks a year, 4-6 hours mountain biking per week would equate to around 300 hours. For a guy in his early 20's that might not seem like much, but for a guy with a young family, trust me, that is a significant amount of time. All of the times I would normally go out to ride I will pack my vehicle full of the essentials: chainsaw, shovel, maddock, hammer, nails and go and do the right thing for myself and for mountain biking in Penticton. I will donate equal parts to my own projects, maintaining existing local trails with help from PACA (Penticton and Area Cycling Association), and cutting in a new "secret" trail that will be decided upon amongst local members of the mountain bike community. 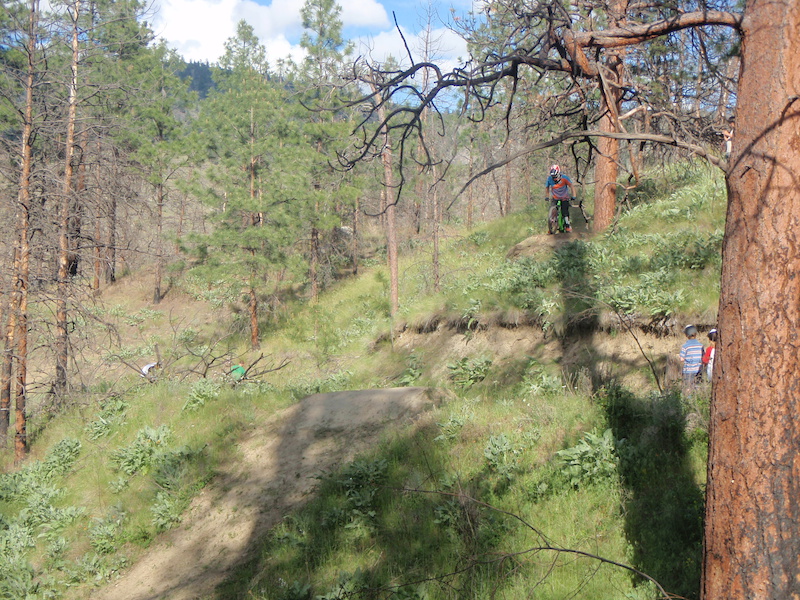 The Knolly team was here recently doing some shooting. That was a thrill for those guys to come and send it! 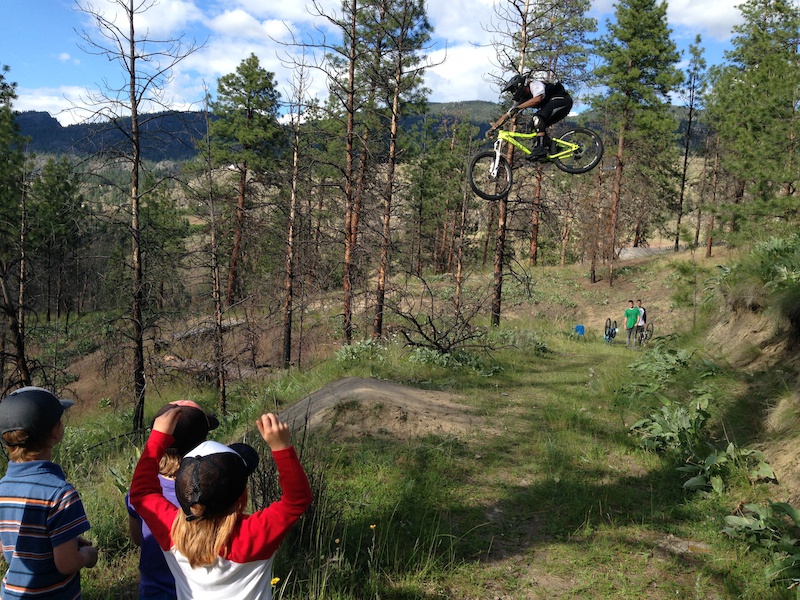 My son's hero used to be Spiderman. Now it's Garrett Buehler. 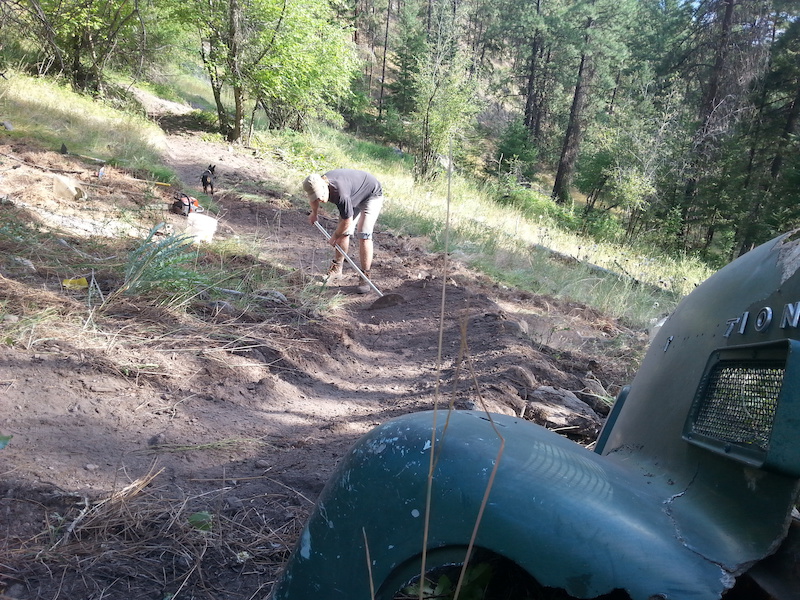 I have a Facebook Page that will keep track of my progress and I will post where I am going to be and on what days to give a heads up to anyone that would like to join me. This is not a one man operation! Anyone who wants to pitch in or is already out there getting it done in is welcome regardless of riding/building background. 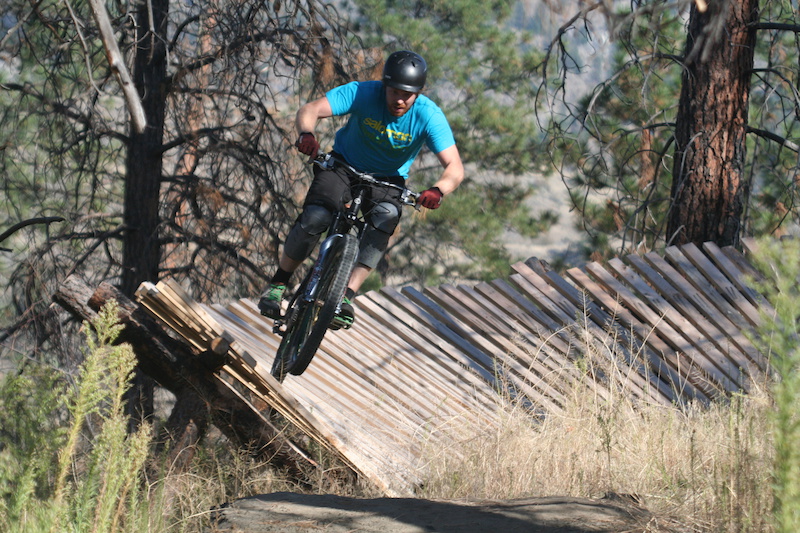 Can't wait to get back on the trails in October!


We'll soon have an update on all of Travis' work as his year comes up in a few month's time.

differentbikeswv (Aug 22, 2014 at 10:28)
New Knolly video is on the way soon. Travis was nice enough to let us film here and it was an unreal time!

greendarthtater (Aug 23, 2014 at 16:18)
Looks like they're trying to destroy the trails taking berms like that. It looks cool, but if everyone rode like that there'd be no berms left.

Owaind (Aug 22, 2014 at 1:54)
Good work! Well done to you. It is difficult to dedicate time to the trails, and most people just can't be bothered. Massive Kudos. I scrapped off 3 months worth of riding time to build as I had repeat problems with my bike frame. I'm doing the same this winter for a few months even though the bike is fine and I'm really looking forward to it.

I spent over 10 years building trails.

1. It improves your riding. You get an intimate understanding of how stunts work and how flow works. You guinea pig lots of stunts, rebuild them and so forth...

2. It improves your body. Try digging for 8 hours a day. You get 'built'. This really helps with bike control and minimising injury in crashes.

mtber321 (Aug 22, 2014 at 8:14)
I dent ever comment on storys but this one really touched me, even though i dont live in or have never been to penticton i just want to thank you for your hard work and determination. Thank you for being you and doing the thing you truly love in life, so many people will benifit and its guys like you that dont get enough credit and we all take for grannit, for that new and improved rad new trail we discover and rip. I want to give you a massive (high five).

choppertank3e (Aug 22, 2014 at 5:38)
Similar dilemma but with less skills. I am now alternating between riding and building each weekend. Sometimes I go to ride but all the building I see that needs doing before the rains stop or other builders messing with my hard earned lines makes me leave the helmet and pussy pads unused for more time spent with the shovel. Then I'll get sick of riding and maintaining my ghetto trails and head to some sanctioned trails. Then I get the bug again to make my shit more like theirs or have something that fits my style better. Then quality Family time dictates there is more work to do when I get back. Love digging, riding and love my family just hate that there isn't more time on this earth to live this good life.

Footster (Aug 22, 2014 at 10:33)
I have had the pleasure of doing a few hours with Trav and his family! The whole Kro family is awesome from his most supportive wife, cause without her support this wouldn't even get off the ground. To his kids that absolutely love shovels and chainsaws as much as Trav. As we say in the OK the fruit doesn't fall far from the tree! I look forward to October Kro and kicking your ass on the trails like you did when I had a bucket in my hand! Braaaap!

humangps (Aug 22, 2014 at 8:40)
Right on Trav! And, you are absolutely right,we have trails,and builders, that are as good as,and in some cases better than,anyone and anywhere. From a fellow builder/maintainer

yyc650b (Aug 22, 2014 at 8:58)
Cool story. I have two kids as well. I am guilty when it comes to trail building. That means I have put 0 hrs in. But this doesn't mean I don't appreciate all the hard work that goes into these trails. Life gets crazy busy with little ones. But I am showing them my passion for bikes and maybe one day they will build a trail.

Cronarkom (Aug 22, 2014 at 21:00)
I've been taking both my boys, now 5 trail building for the last year when they can do it. They like it and learn some independence and self-sufficiency in the process. Besides, in a few years they'll be riding the trails, and for them to know they had a small hand in it and memory of hanging with their dad is what it's about. Otherwise my time has been split probably 60/40 building. It's therapeutic for me in a lot of ways and once I get a project going just can't seem to drop it; personality defect. Long live the builder and for those of you that give us props, many thanks.

baylenc1 (Aug 23, 2014 at 20:30)
Being only 14 and working my butt off digging trails for my community is a lot of work. I'm starting to dig 6 times a week, 5 hours a day, get home from school, dig from 4-9 eat dinner on the trails (clif bars) return and do my homework. Lights out. Builders dont get enough recognition. We go through horrible weather, blistering hands, torn down illegal trails and people ruining our trails, i also go through fines from the town for tresspassing to search for a site. I have no time for riding but i love seeing others ride. When you see people riding your trail, and excelling and having a smile on there face, you know your job payed off.

unwindingcarrot (Aug 22, 2014 at 4:15)
I feel him on the kids part wouldn't trade them for the world but till they can come out with me they take alot of riding time away kudos buddy

woodchucker (Aug 22, 2014 at 21:52)
I used to ride in Penticton a bunch up at the bog and naramata, where is the new stuff? Would love to ride there more but need some directions to all your hard work

bighitfsr04 (Aug 22, 2014 at 12:41)
Great read! I have been on the injured reserved list since last September, I wish my down time was this productive!

timsim07 (Aug 22, 2014 at 12:04)
I know whats stopping me. There's nowhere to build them where they won't get knocked down or risk making other secret trails more obvious and thereby get them destroyed too