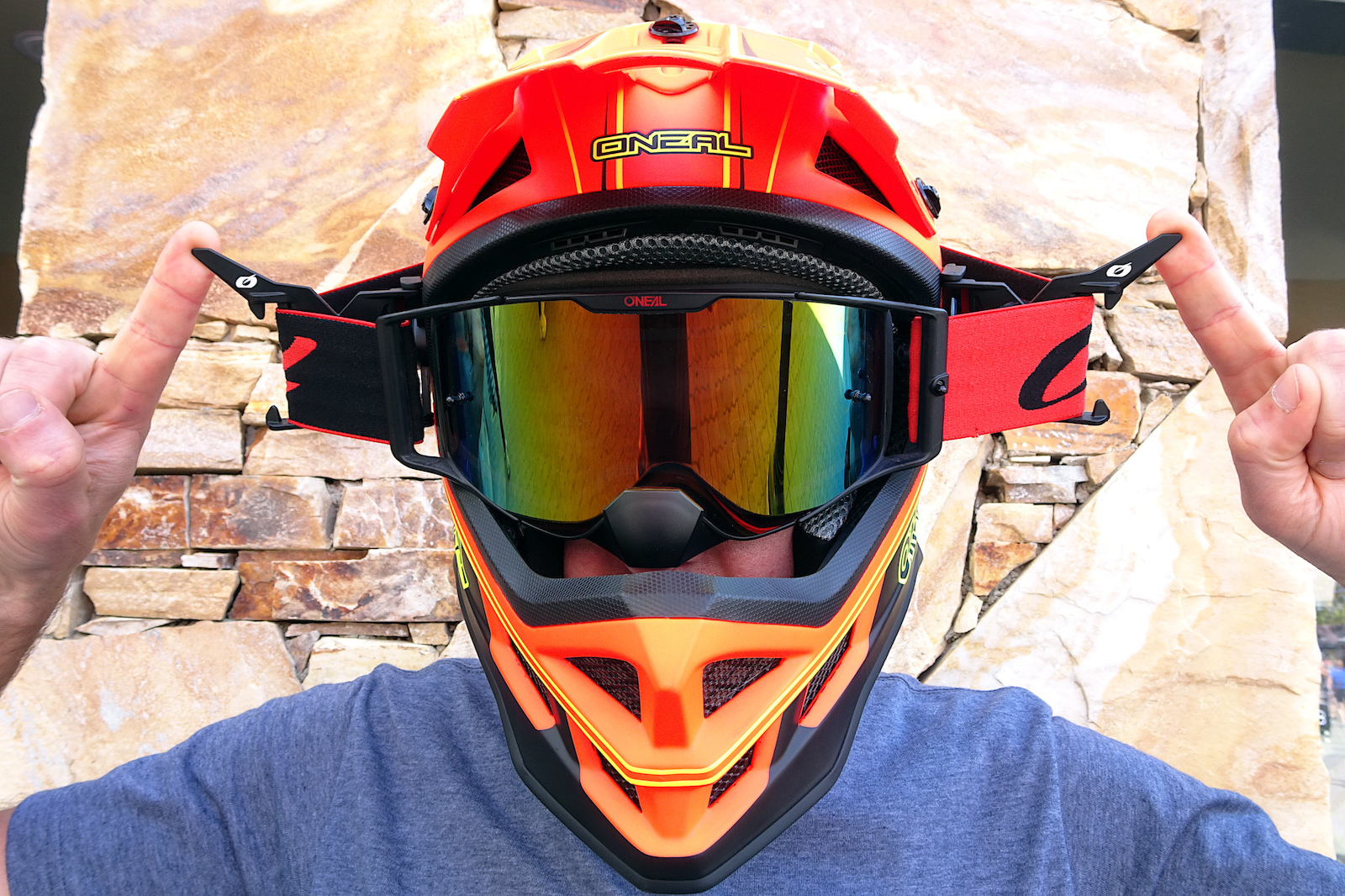 Jim O'Neal began his off road racing career on a borrowed motorcycle sometime in the late '60s, and was on the ground floor of the American motocross revolution when the first European racers brought the sport, along with their exotic two-stroke machines to the West Coast. O'Neal founded his namesake company out of a Ford Econoline van in 1970 to make better gear for motocross racers, and never looked back. Fifty years later, Jim is still riding and O'Neal's range of helmets, protective gear and accessories is also flourishing.

Perhaps the most conspicuous O'Neal rider in mountain biking is the GOAT. Greg Minnaar has been on O'Neal since we can remember. You may imagine he's been tempted by more than one high-dollar offer to jump ship. The fact that he hasn't, speaks a lot for the brand. 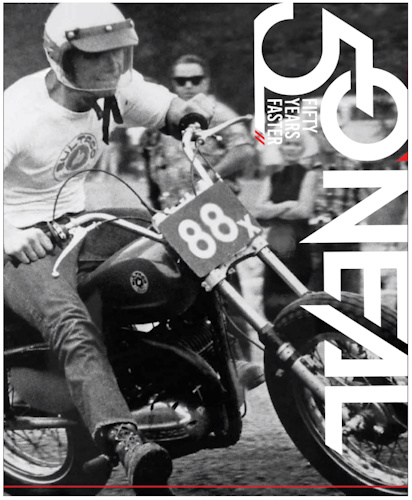 Jim O'Neal racing a 250cc Spanish Bultaco - early 1970's.
out their cycling range which includes top to bottom kits, footwear, spine and neck protection, eyewear and of course, full face and half shell helmets. For 2020, O'Neal's Range will carry their 50-year anniversary logo to commemorate what has arguably been the longest running marquis in two-wheeled off-road action sports.


by oneal
Views: 593    Faves: 2    Comments: 0
O'Neal celebrates fifty years of motocross racing. It's not about mountain bikes, but it's still a good watch.

Here's a few items that caught our interest at their celebration in Whistler, including the new Greg Minnaar signature Carbon Blade full face. Before we get to that, though, we should probably explain what's going on in that lead photo. 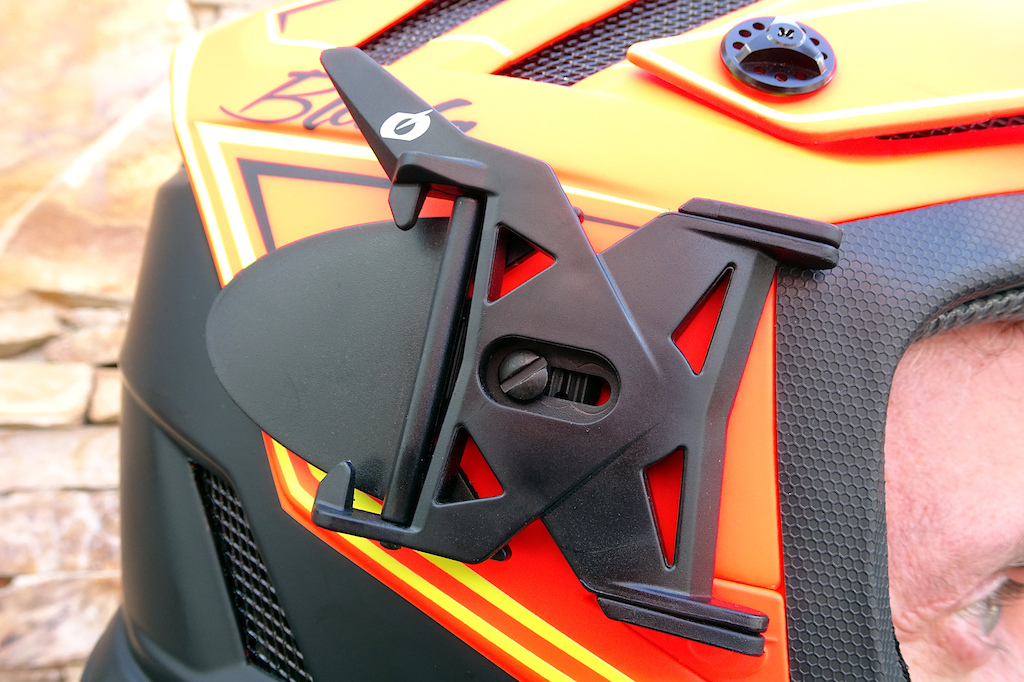 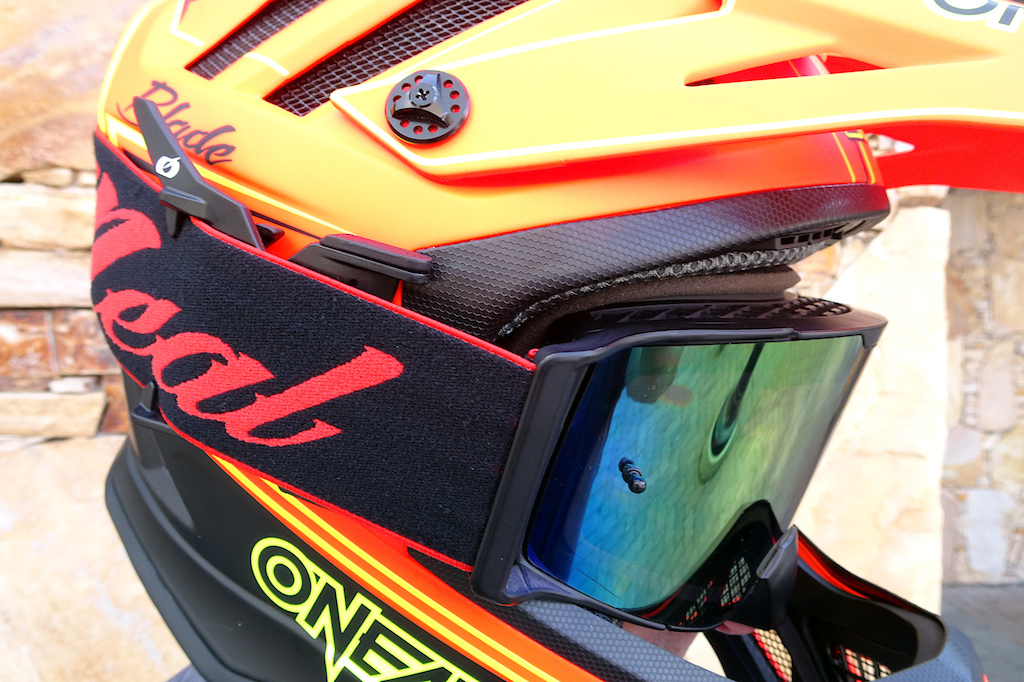 The retracted position - flush with the strap. 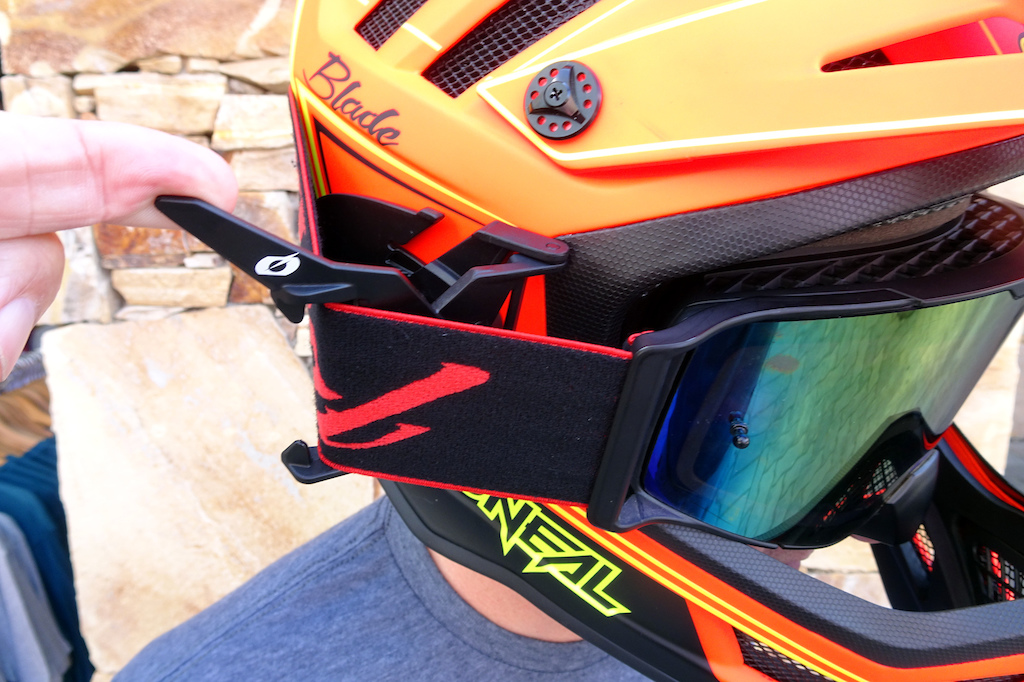 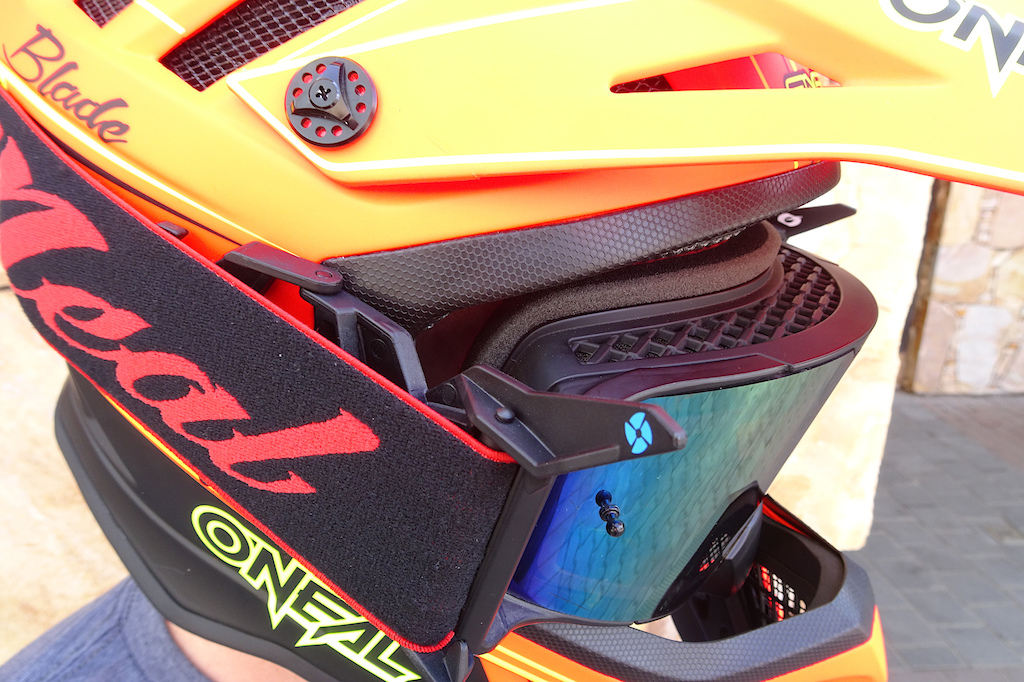 ...And lock in place, lifting the goggle clear of your face.
Air Flaps are a pair of ingenious devices that are inserted into the sides of your goggle straps. When not in use, they lie flush with the helmet. Flip the Air Flaps forward when you are not engaged in combat and they lift your goggles about ten millimeters away from your face for maximum cooling and ventilation (far right). One flick of your fingers snaps your goggles back in place. Reportedly, Air Flaps are popular among enduro motorcycle racers. $49.95 USD 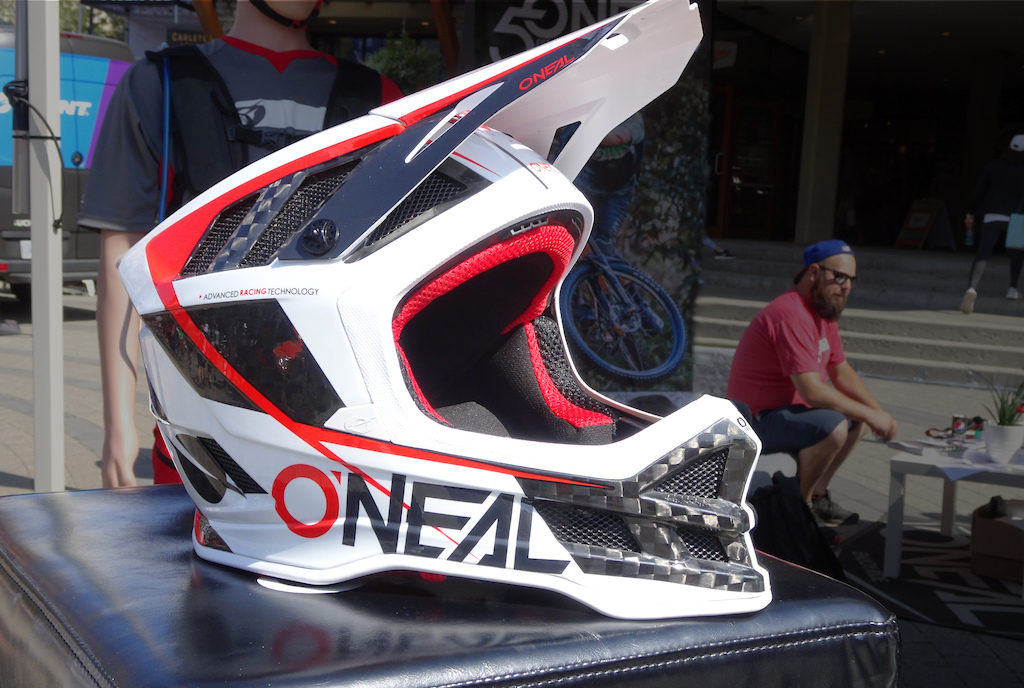 O'Neal worked with Greg Minnaar to develop a premier DH racing full face and the Blade Carbon GM was born. Key features are enhanced ventilation, two shells to ensure a good fit, and a lightweight carbon shell which uses unidirectional material that has been interwoven to improve impact resistance. Inside, you'll find a removable/washable padded liner with emergency release pulls - and below that, O'Neal's green, IPX ACells are fixed to key locations to provide low-speed impact and rotational impact protection. The rear of the helmet is profiled to work with O'Neal's neck protection collars. 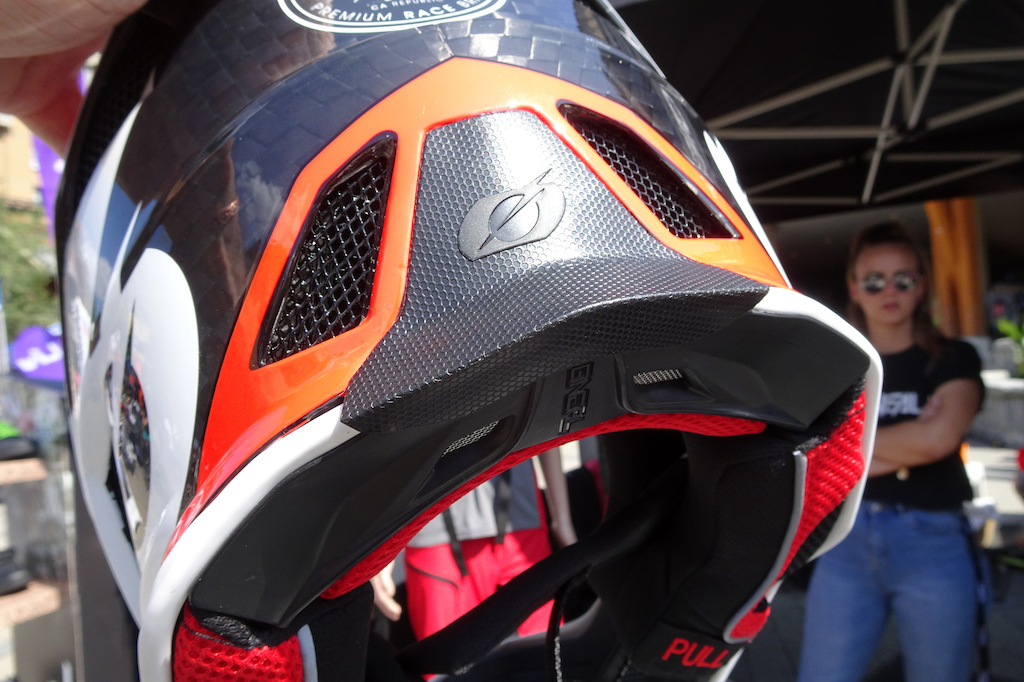 Rear of the helmet is profiled to work with protection collars. 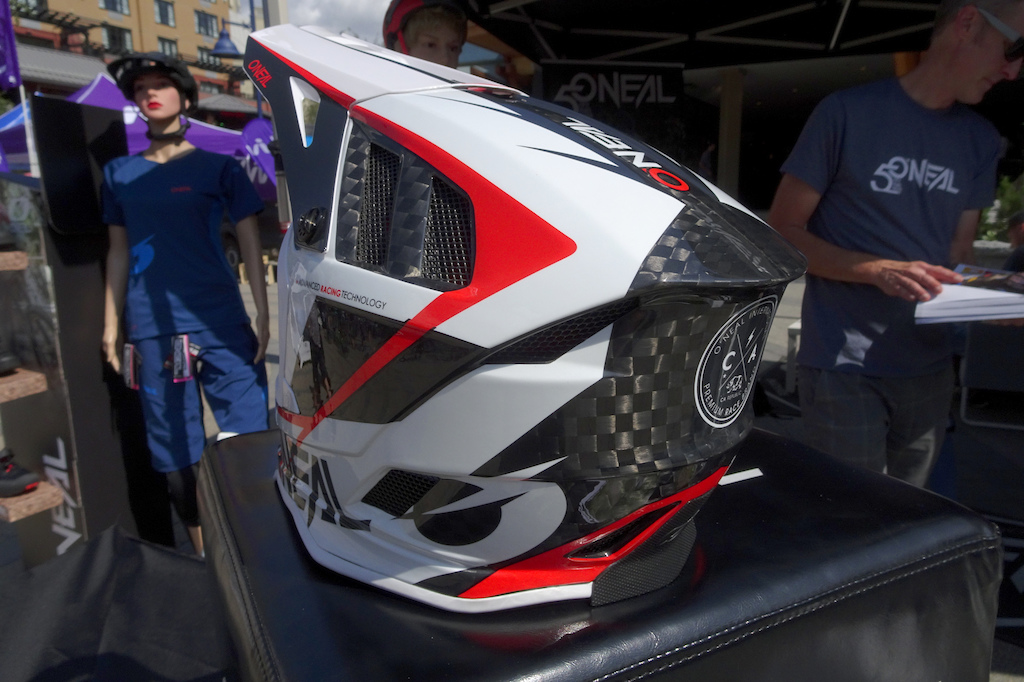 Lots of ventilation. Woven strips of unidirectional carbon are visible under the clear-coat.
Details include a magnetic Fidlock chin-strap buckle and the helmet comes with a GoPro mount that fits into the adjustable visor port. O'Neal also supports the Blade with spare parts from its on-line store. The helmet passes EN1078 safety standard for bicycle helmets and the ASTM Downhill standard. O'Neal says the Blade Carbon GM weighs 980 grams, and its MSRP is $449 USD. Blade helmets are also offered with a more affordable fiberglass shell and in a variety of colorways. Check them out here. 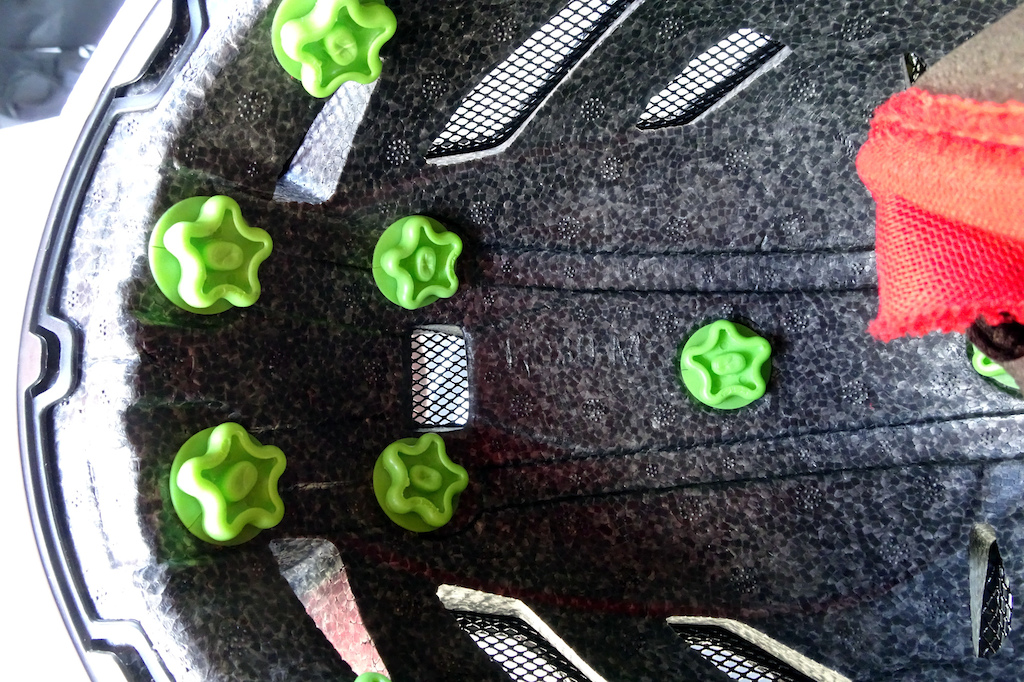 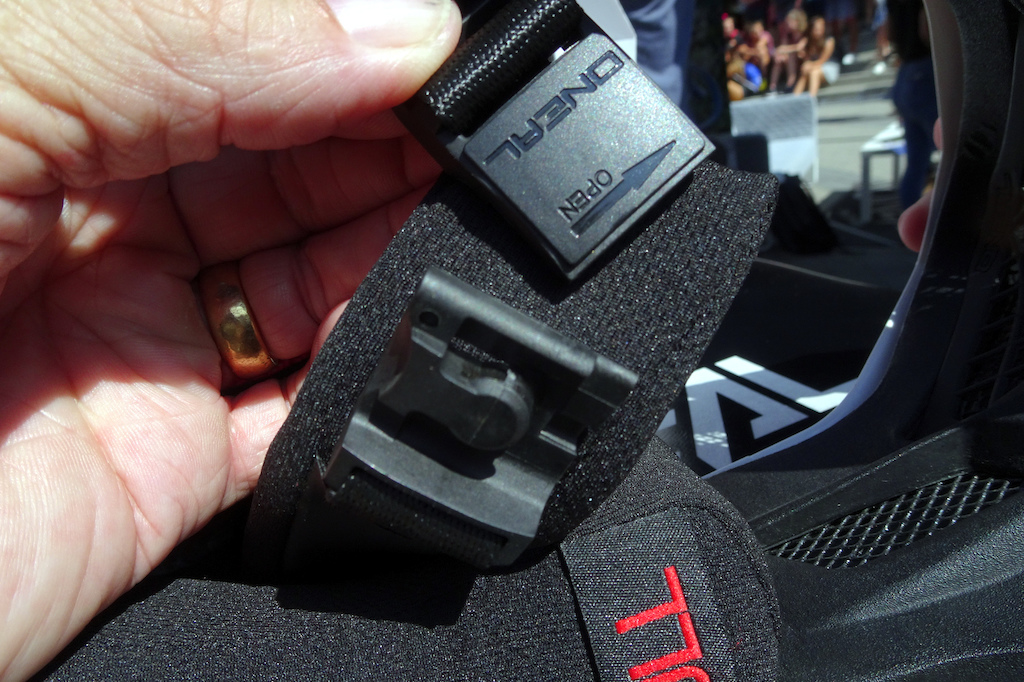 Fidlock magnetic chin-strap buckle is a better, easier to use option than D-rings. 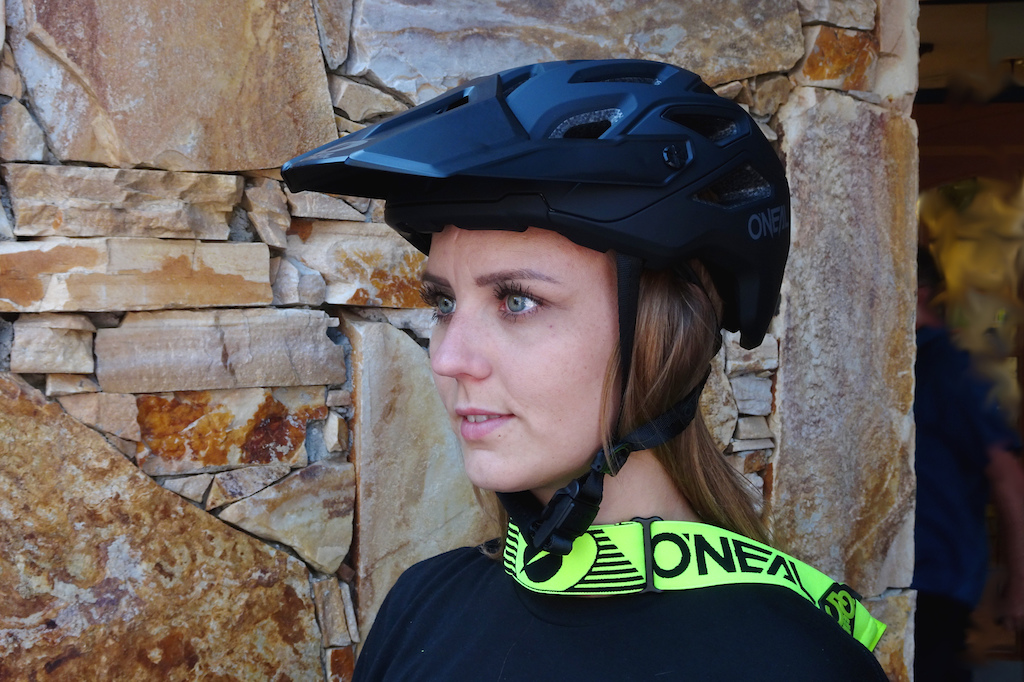 New for 2019, O'Neal's premier half shell helmet has a moto-style extended visor that flips up to stash goggles for climbing stages. The rear profile is also goggle friendly, without adopting the angular "Tron" inspired lines that have been predominant this season. Inside the helmet, an array of green slow-memory ACells provide protection from rotational and low-speed impacts, and like the Blade GM, the chin-strap has a magnetic Fidlock buckle. The Pike IPX Solid is claimed to weigh 390 grams and carries an MSRP of $179 USD. Black only. 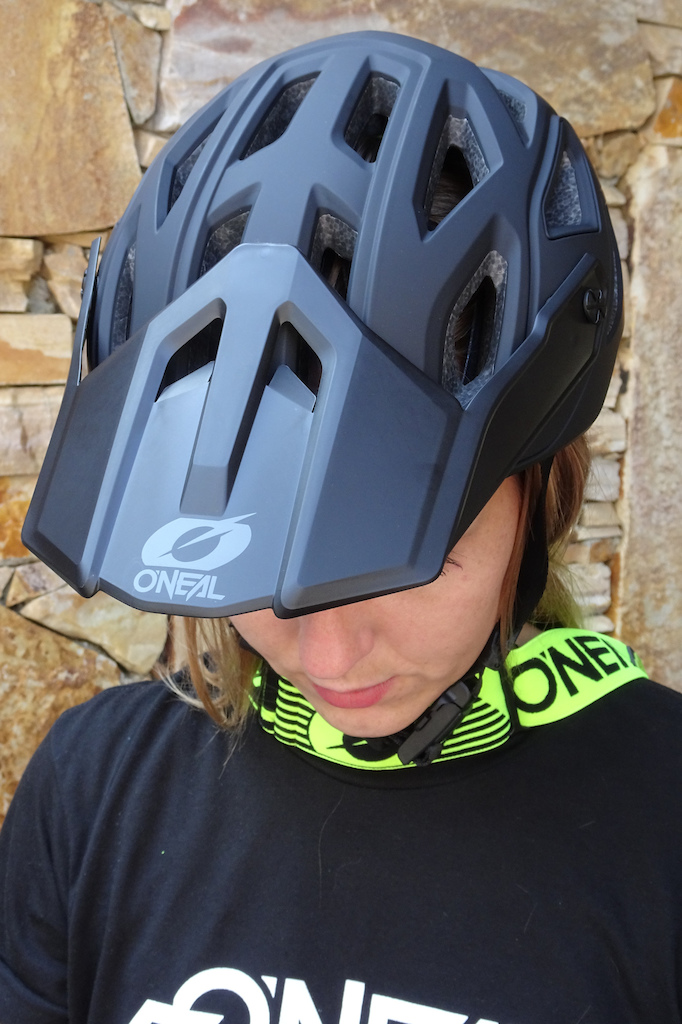 Moto-style visor is longer than most. 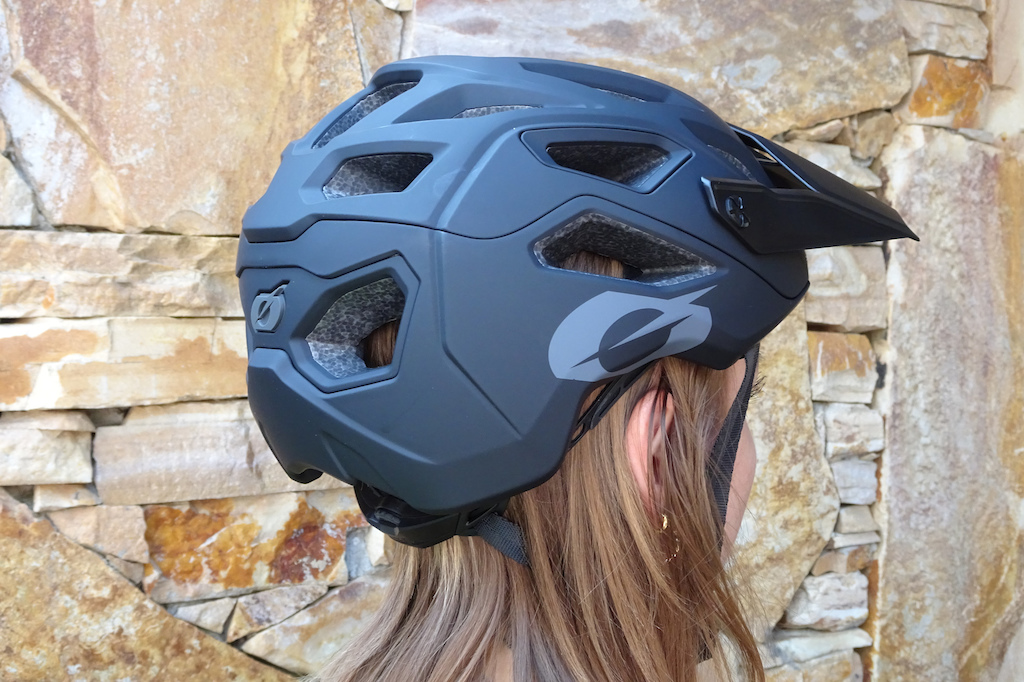 Goggle friendly in the back. 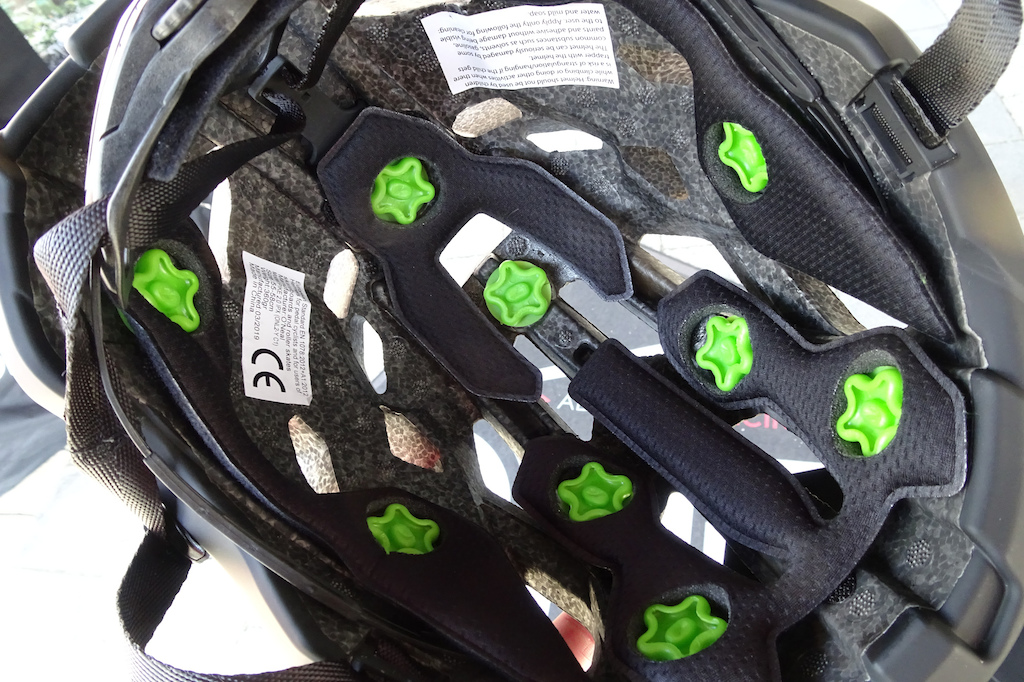 sirbikealot (Aug 27, 2019 at 17:42)
Unidirectional can be placed underneath and the crosshatch is likely an aesthetic top sheet

Ronkol (Aug 28, 2019 at 2:09)
Not an expert, but Unidirectional carbon does not make sense in a helmet where the forces can come from all directions.

RichardCunningham Mod Plus (Aug 28, 2019 at 9:47)
The weave you see begins as pre-impregnated UD carbon, which is then cut into strips and woven. The technique is beneficial for high-strength, lightweight applications on curved surfaces where omni-directional strength is desirable (helmets, for instance). Google Textreme for the science. Average woven carbon is simply bundled carbon fibers which are impregnated with resin in a second operation.

Unidirectional fibers are by definition only orientated in one direction. The fibers on the outside layer of the helmet are a woven cloth with fibers at 0 and 90 deg.

Textreme (made by Oxeon) is a nice solution for a surface finish (and structurally as well) it is a spread tow application where the fibers are laid out very flat and thin allowing a strong, lightweight layer as your final surface. you can see the different option from Oxeon here: www.textreme.com/what-we-do/spread-tow-products

jdeuce (Aug 27, 2019 at 17:09)
The flap is cool but I want a fox proframe-like helmet with hovering visor attached to it. Goggle foam is nasty in so-cal summer.