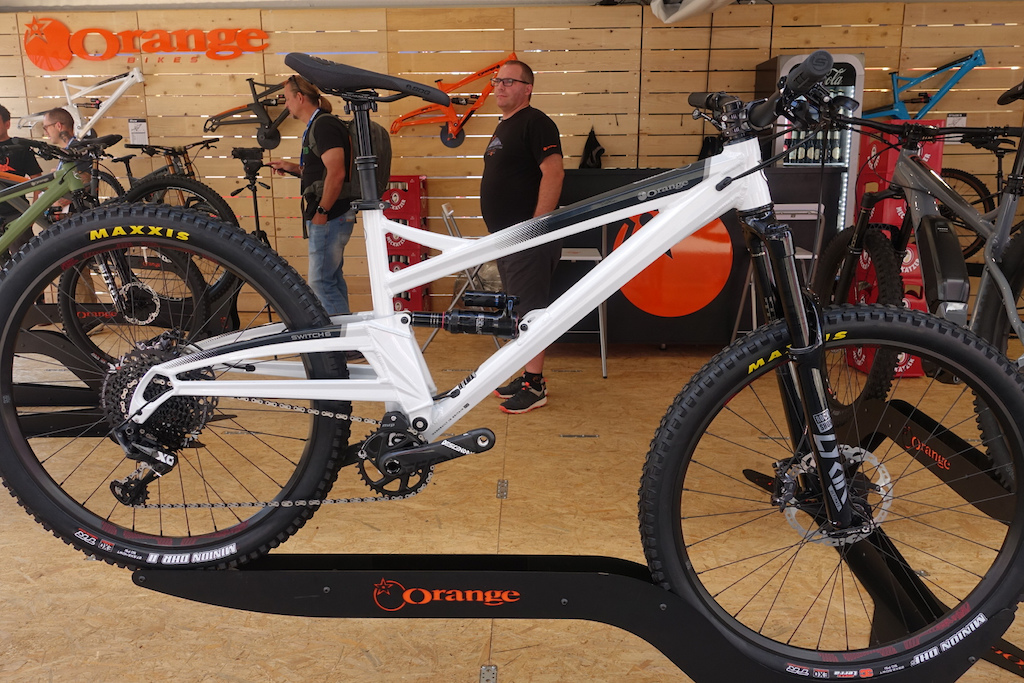 With all their production in house and the ability to churn out prototypes at a frightening pace, Orange will generally turn up to trade shows with something shiny and new to display. Last year at Eurobike they were able to devise a 29-inch downhill prototype that rapidly became reality as the 329 and this year they've taken on the mullet craze with the Switch 6. 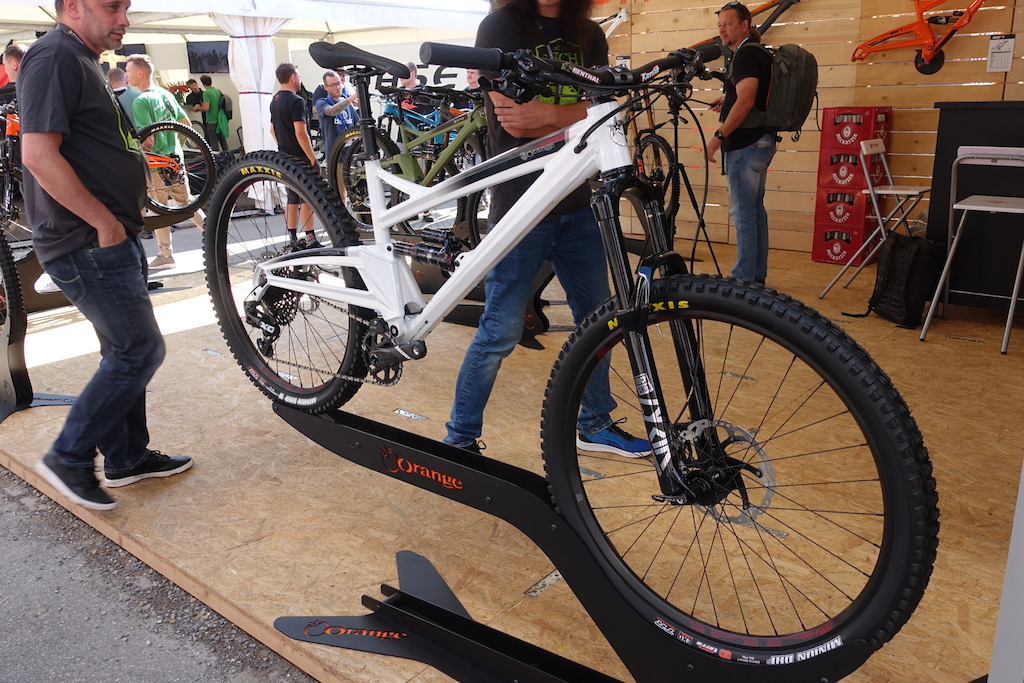 White is returning to the Orange colour pallette. They're also introducing a range of matte colours and a new sterling silver.
The mullet concept is tried and tested ground now with Enduro World Series and World Cup victories already claimed by the mixed wheel size bikes. The 29-inch business-in-the-front means the bike rolls over the ground well while the 27.5-inch party-in-the-back keeps the bike maneuverable and the chainstays short. Orange were more than happy enough to jump on board and unveiled this new bike at Eurobike. 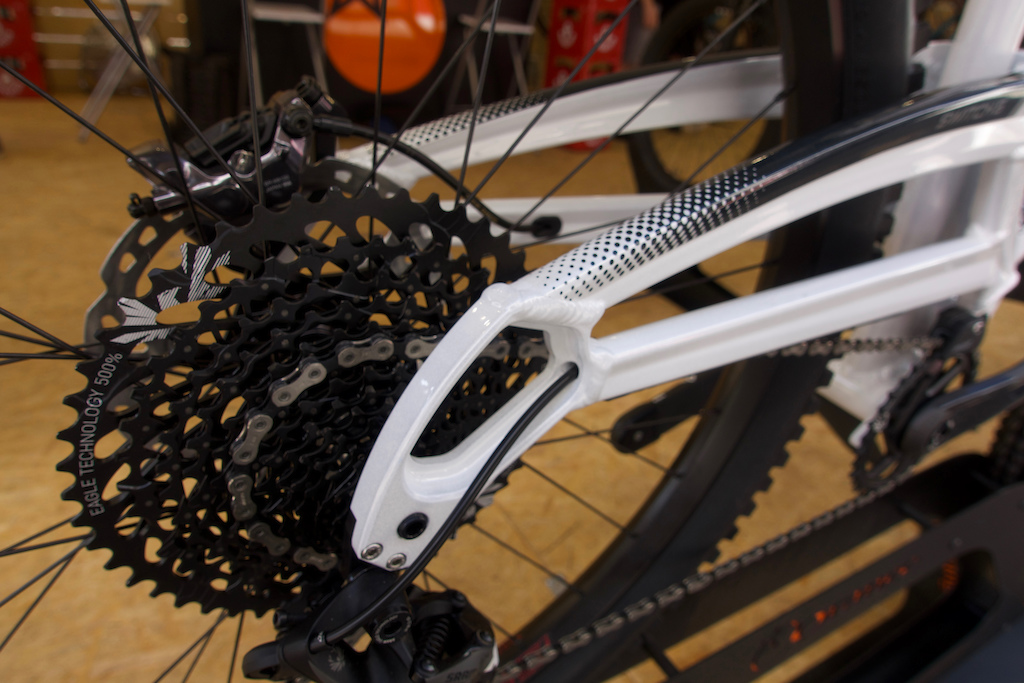 The Alpine based rear end means the chainstays are 3mm shorter than on the Stage 29er.
The 145mm travel Switch 6 is apparently based on two of Orange's most popular frames - the Alpine 6 for the rear triangle and the Stage 6 for the front triangle. The result is a bike that looks to be cast in their traditional mold but with a bang-on-trend outlook.

Combining a smaller rear wheel with the Stage 6's front triangle has made for some pretty interesting numbers too. Firstly, the bike has been slackened off and now has a claimed head angle of 64°, a full 1.5° slacker than the Stage. It's also claimed to be 5mm lower in the bottom bracket, 1.5° steeper in the seat tube angle and the reach has grown by about 20mm in all sizes, making for a pretty radical bike. 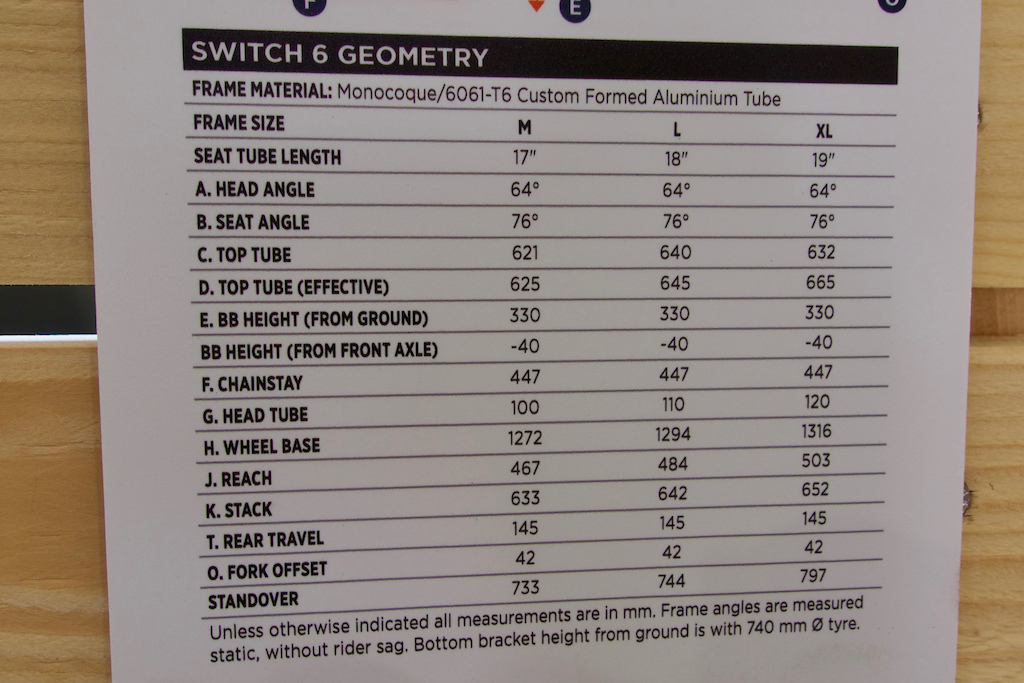 The geo cheat-sheet for the new bike. 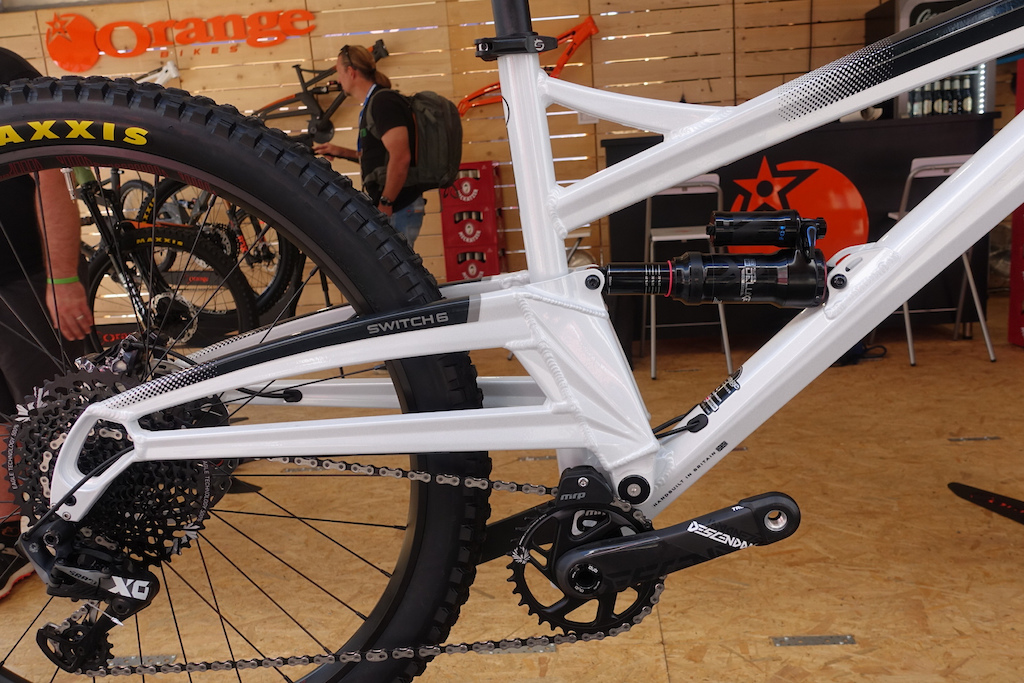 It will come as no surprise to anyone that Orange have stuck with the single pivot for the new bike. 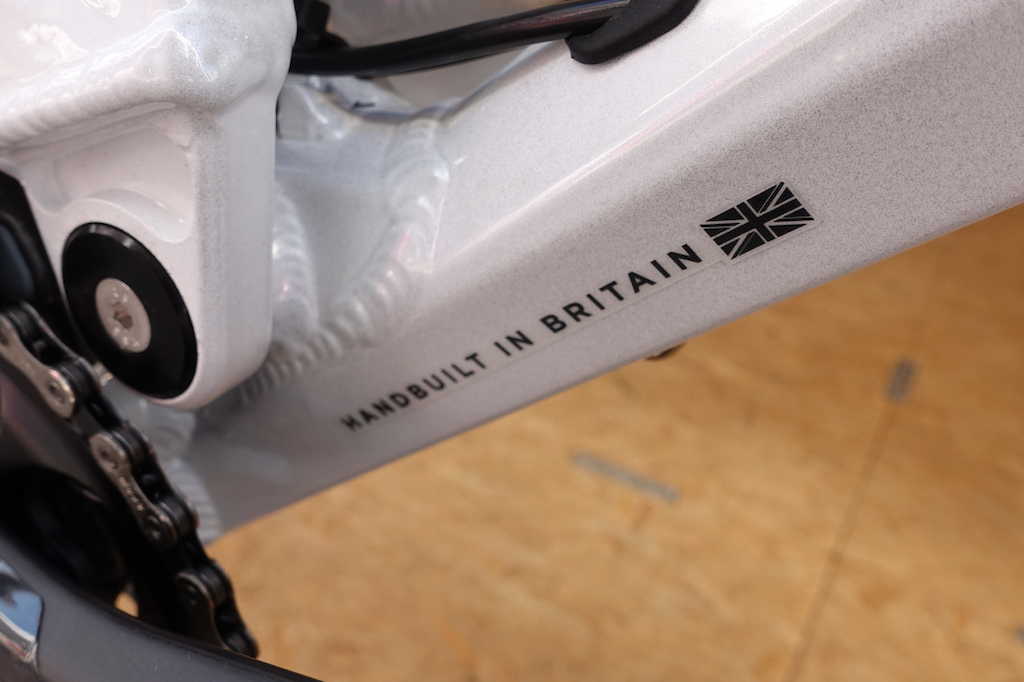 Further details of this bike are due to be revealed later this month.
Like most Orange bikes, the Switch 6 will be handmade in their Halifax factory and aluminum only. It looks to be close to production-ready and we were told there's already a demo fleet ready to go too. Full details including pricing and availability are expected to be revealed at the Cycle Show at the NEC in Birmingham, UK, on September 13.

tobiusmaximum (Sep 4, 2019 at 4:52)
People are gonna lose their minds if Orange ever actually design a completely new bike..

Garpur44 (Sep 4, 2019 at 5:45)
Love the way they've devoted a whole article to it, literally could have popped up a pick of any other Orange ever and no one would know the difference

I've had a Five and currently running the first version of the alpine 6. Unfortunately there's not much about the oranges I can get excited over.

vinay (Sep 4, 2019 at 6:36)
I forgot what it was called, but they had a 100mm travel bike with some kind of linkage and a vertical shock. It was called ST4 if I recall correctly. Very different from the typical Orange model. I love the looks of these modern Orange bikes and I trust it should be good fun.

vinay (Sep 4, 2019 at 8:45)
@SnowshoeRider4Life: By modern I mean the newer Orange frames like what I think started with the Orange Four. Open rear triangle, slight curve in the tubes. I really like them like that.

b45her (Sep 4, 2019 at 13:10)
@SnowshoeRider4Life: you can scoff at them all you want but they work, i had a 2010 orange 5 that i sold to purchase a santa cruz blur LTc because of all the reviewers gushing over them.
biggest mistake i ever made the blur rode like total dogshit compared to the orange. ive never bothered with multilink bikes since.

OllyR (Sep 4, 2019 at 5:36)
I used to look down on the can crusher single pivots, over the much more refined riding multipivots ive had in the past. I bought an orange because i wanted to lower my maintenance costs, time and effort.
Thing is, orange have been making these a long time and the geometry is so spot on the money, that it more than makes up for the more agricultural suspension feel.
A Maestro bike feels more planted, more grip, more plush, but it only applies if you're riding your bike while thinking about critiquing it. If you're just pushing your bike down the trail as fast as it'll go, its a fantastic riding bike and thats all that matters. (Also, a lot of the clever stuff like anti bob climbing can be done shock-side these days)

They are the Porsche of bikes. It works as a daily driver, but can still play with the super-cars.

Love my five29. Will most likely get a stage frame if i ever break it. The only think i would change would be increasing the size of the two pivot bearings, They're fine, but for the cost a couple of grams, you could have them last forever and never need changing. I would also put a (nice chunky) ball bearing in the swing arm shock mount (rather than a bush), for longevity and plushness.

At best they are a land rover defender: Old, inefficient, slow and clunky, but with a simple design, a loyal fan base and a certain rustic charm.

DavidGuerra (Sep 4, 2019 at 6:32)
@OllyR: A single pivot bike will pedal as good or as bad as a multi-pivot one. You aren't more dependent on shock anti-bob than with a different design (you can be of course, but it's not about being single or multi-pivot).

I've always fancied an Orange but not for any good reason. Just want one.
I've only ever had single pivot bikes too; never ridden any linkage bikes.

Burp19 (Sep 4, 2019 at 9:25)
@You apparently have never owned a Porsche or a top end bike. Orange bikes are OK, that’s about it. They are maybe the Datsun or Chevy of bikes, but the Porsche???? LOL, not even close. I’ve seen HS vocational students that can weld better than Orange welders, and there is nothing amazing performance wise regarding their designs or builds. That’s reality. ????

DavidGuerra (Sep 4, 2019 at 11:02)
@Burp19: They seem to be pretty light. Their DH bike is the lightest around, including carbon bikes. They also seem pretty stiff, from only having one pivot and a sturdy rear triangle. I like their pivot location, which makes them pedal great. From all that put together, if the geometry is good that's it, a perfect bike for any level of riding that will stand the test of time and need no upgrading. Their only shortcomings are a lack of progressivity and a bit of chain growth, but they are inherent to the design and not that significative.

More importantly: have you driven a land rover defender?!

DavidGuerra (Sep 4, 2019 at 16:11)
@Altron5000: Ok whatever, if that's your perception that's what it is. I have actually ridden neither, but I miss my Prophet. There was nothing wrong with it, I'd be happy with a current (geometry/wheel size) version of it.

DavidGuerra (Sep 4, 2019 at 11:10)
Yes, the bike industry has to constantly present something new, which also means that all they do is flawed. Flawed products must necessarily be presented, to constantly fuel a need to upgrade. This is not unique to the bike industry. It's the essence of consumerism. I applaud the brands that simply get it right and stick with what works.

DavidGuerra (Sep 4, 2019 at 11:20)
It must also be said that many new designs are worse than the previous ones but that seems to be the way the market works. One has to create the illusion of improvement.

DavidGuerra (Sep 4, 2019 at 11:25)
That said, Orange has indeed been refining and changing their product, even if they always stuck with the same basic design, which is also their trademark.

markyp1965 (Sep 4, 2019 at 11:20)
You either like Orange’s bikes or you don’t, it’s about personal preference and just because you don’t like them, that doesn’t automatically make them c##p either.
I’ve owned two Fives and currently own an Alpine 6 and a 324. It goes without saying that I love ‘em even though I’m nowhere near good enough to get the very, very best of out them. But, I have a lot of fun trying and at the end of the day, biking is all about having fun ????

DavidGuerra (Sep 4, 2019 at 6:40)
"27.5-inch party-in-the-back keeps the bike maneuverable and the chainstays short" These chainstays are on the long side even for a 29" long travel bike. This bike could have both more travel and shorter chainstays, and I think it should.

Burp19 (Sep 4, 2019 at 9:35)
@bkm303: Most likely. It does display how far the show marketing types and BS artists will go to hype something that literally does not deserve to be hyped or covered as something “special” in any way.

steel4real (Sep 4, 2019 at 5:11)
A curious Orange ! It would appear to have identical geometry to the newly released Stage 6 ? Every figure is the same except the chain stay length ?? Orange may need to check those figures. singletrackworld.com/2019/09/2020-orange-stage-6-exclusive-first-ride-review

jbeanbuyer (Sep 4, 2019 at 5:44)
I was thinking that. I'm guessing they use the same front end and different rear which would have to change some figures other than just CS, especially as its re-using the Alpine rear.

tempmeister (Sep 5, 2019 at 0:40)
QUESTION to Pinkbike SINGLE PIVOT haters - where are you when Evil release a new bike? They are just single pivots with a bit of linkage to add a bit of compliance before the shock and tweak the motion ratio...

Aksel31 (Sep 4, 2019 at 5:29)
I just realized that this bike would be a perfect match with Ceramicspeed telescopic shaft drivetrain (In terms of rear end geometry)

That would make a neo/retro frankenbike for sure!

Strange as they’ve been producing the same bike for decades

sriracha (Sep 4, 2019 at 10:20)
I realize that Canadians and Minnesotans are proud of their hockey-hair, but can we come up with a better name for mixed wheel size bikes, instead of "mullet bikes"?

chakaping (Sep 4, 2019 at 13:27)
I've tackled the "brake jack" and related characteristics in this recent review of the outgoing Stage 6, might be useful reading for some of those who haven't ridden one...
unduro.co.uk/mtb/review-orange-stage-6

Wamprat (Sep 4, 2019 at 13:47)
Finally Orange is on the proper seat angle program! Orange hold a special place in my heart so I could be looking at my next bike.

Burp19 (Sep 4, 2019 at 9:39)
I’ve seen HS vocational students practicing welding in an intro class that weld better than this. And I’m not joking!

taouin (Sep 4, 2019 at 9:19)
Not sure about single pivot bike to climb, but I do miss my single pivot DH machine. There something about how it absorb hit that I love.

Is rear triangle even the right phrase for that? LOL.

mtb-scotland (Sep 6, 2019 at 19:34)
@Murfdog: because they are being ridden. people that are winning would still win on normal bikes.
Below threshold threads are hidden

Ttimer (Sep 4, 2019 at 6:42)
Makes sense on long travel bikes in smaller frame sizes. Allows for lots of rear wheel travel without getting kicked by the rear tyre on steep bits.