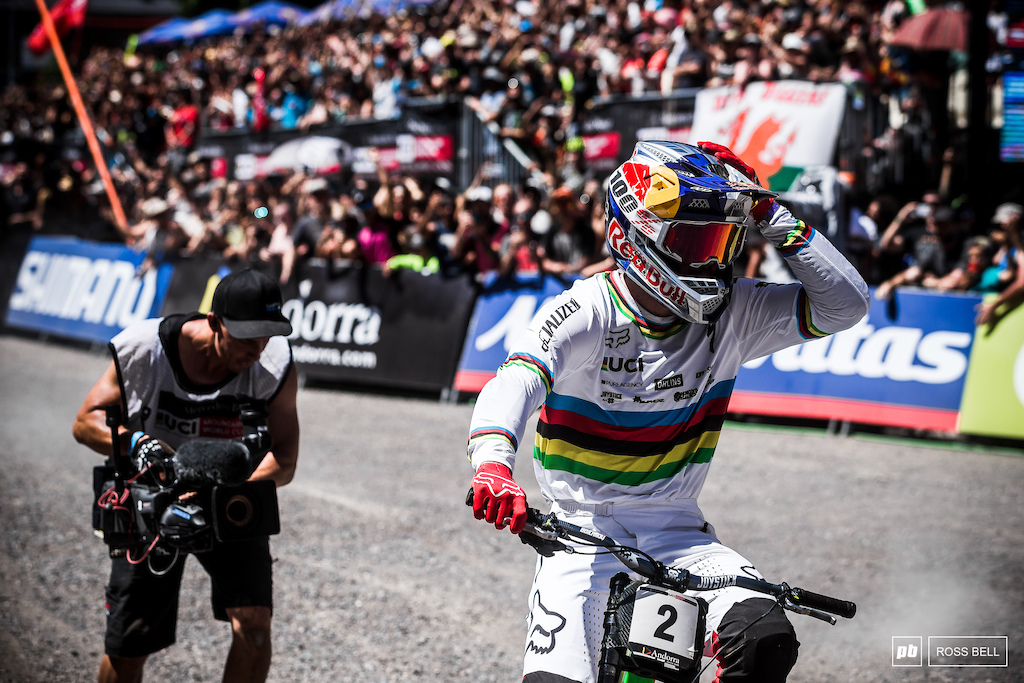 After facing some tough conditions in Vallnord let's see how the results stack up in the overall standings.

BamaBiscuits (Jul 8, 2019 at 6:22)
Eddie Masters goes and wins an enduro instead of racing and stays in the top 20. That man’s having a helluva season.

vinay (Jul 8, 2019 at 6:29)
Yeah, even though he isn't at the top anymore, I'm still rooting for him. That said, Loic may have had one "bad" race (and maybe relatively poor qualifiers at Maribor) but other than that he's been consistently at the top too.

mtbikemccoy (Jul 8, 2019 at 12:52)
Ridiculously impressive. I feel like there are a few riders who could win at any race, but they're doing it by riding out of control and/or being on their home track. Troy and Loic are actually just that fast. How else can you explain the consistency?

MarcoPereira (Jul 8, 2019 at 15:00)
@vinay: "isn´t at the top anymore"? Are you watching the same season as the rest of us? Brosnan is having the season of his career and is well in contention for winning the wc dh overall...

JARTassie (Jul 8, 2019 at 17:11)
If you haven’t seen the crash Troy had in practice the morning of the race; it’s on his instagram - to still pull a third after hitting a tree that morning, he’s hungry for the win.

vinay (Jul 8, 2019 at 21:25)
@MarcoPereira: I meant to say he was ranked first in the overall for a few races and I still really want to see him take the overall title this season. So by "top" I meant to say the first position, sorry for the confusion.

teamdoa (Jul 8, 2019 at 7:55)
Gwin is having a nightmare this season injury/results wise. Danny seems like our only hope in the UK to be able to actually win a male world cup overall these days. The French are taking their sport back now it seems with some amazing talent.

jwdenver (Jul 8, 2019 at 8:43)
Gwin definitely does not look comfortable on that huge Intense bike. It's too bad he's not battling with the top guys anymore.

joedave (Jul 8, 2019 at 8:47)
@jwrendenver: Agreed, an intense change from last season.
Funny, I thought he stated that the Intense suspension works SO well it made him question wether any of his other previous bikes worked properly. Or something like that... Now- eating his words.

SintraFreeride (Jul 8, 2019 at 9:33)
@ytjodave: Eating his words? WTF are you on about. He got injured, it happens. Blaming the bike is retarded.

joedave (Jul 8, 2019 at 9:45) (Below Threshold)
@SintraFreeride: I ‘on about’ he hasn’t been riding like his normal self since being on his intense bike. ‘Eating his words’ was used in this instance as a figure of speech in which a word or phrase is applied to an object or action to which it is not literally applicable.
I love AG and am sad he’s having a shabby season. Don’t even trip dawg.

SintraFreeride (Jul 8, 2019 at 9:52)
@ytjodave: I agree he hasn't been his usual self this year. I just don't think it is the bike but rather just bad luck. When you said "eating his words" it sounded like the usual pinkbike comment trashing a rider. I am also a big Gwin fan even if I tend to roll my eyes when he harps on about religion. I hope he gets better soon and wins a world cup before the end of the season!

Drew-O (Jul 8, 2019 at 10:01)
@jwrendenver: I'd guess maybe it's more about his mental space on the new team than the bike. Didn't he contribute to founding/funding the enterprise? Must be a ton of pressure, and every race where he performs below expectations just makes that worse. Hope he can heal up and have a great end of the season.

onemanarmy Plus (Jul 8, 2019 at 12:28)
@jwrendenver: He was on pace before he started getting banged up. People think he can't hang but the dude is still in 10th overall. With the crashes and what not, that's pretty impressive.

I honestly wouldn't be surprised if he sits out the rest of the season to get healthy for world champs.

But yeah... definitely not looking good on that bike. I think he as far as his abilities is still plenty fast. Sucks that he's essentially all the USA has right now. Charlie's hurt and he's still aways behind the French. Dakota is quick but I don't really see him beating any of the French riders or Troy.

jaame (Jul 9, 2019 at 0:57)
I feel what Danny has gained in consistency, he has lost in raw speed. He hasn’t looked close to winning a race this year. The pace just isn’t quite there.
I think having Greenland in the same team was a huge help to him. Fast and loose. Right now Walker looks to be a consistency over raw pace kind of guy too.
Bruno has the pace this year and be unlucky to not win the overall.

onemanarmy Plus (Jul 9, 2019 at 1:47)
@jaame: Then you weren't watching the same race I was watching this weekend. He was much much faster than most of the field. He's ranked number 4. Considering how the top few guys have been riding this year, that's very very good. Think you're forgetting that the first race of the year he was second. He lost to Bruni by .4 seconds... this is a very special year to be watching Bruni finally click. He is doing amazing things. He knocked off an insanely fast Loris by about the same margin this weekend. Do you think that Loris has lost his raw speed?

Greenland is looking WAY better now that he's teamed up with Hart.

Hart's got plenty of raw speed to get some wins.

jaame (Jul 9, 2019 at 3:04)
@onemanarmy: I want him to win, but I don't think he has the speed at the moment. He doesn't look like winning. He looks like finishing on the podium at every round. Kind of like Troy Brosnan in years gone by. He looks like a consistent podium contender who won't extend his win tally this year. I hope he proves me wrong. We know it all goes on confidence and at this point in time, Bruni is on a winning streak. When will it end?
I'm trying to be objective, not negative.

I was mainly talking about the overall title. America does not have a whole hell of a lot of bullets in the chamber. Fortunately we do have some big ones. Luca included. I wouldn't be surprised if he wins this weekend.

You're right though about the overall, but we've only ever really had Gwin. Fingers crossed for Luca, he was so on pace last year and you could tell how close he was to snagging it. Cheers!

NorCalNomad (Jul 8, 2019 at 15:42)
It's pretty mind blowing how Minnaar is still holding his own for this many years! Dude has been racing and WINNING for over 2 decades. Hill, Peat, Kovarik, Gracia, Athertons, Palmer, and Vouilloz, just to name a few legends that have raced against him and mostly retired from DH. Yet he's still putting down top 10 results.

Fresh1 (Jul 8, 2019 at 8:08)
@zyoungson: The race season started at the end of April and there was a race in May. Mammoth Mountain here in CA got 29 inches of snow in May. It's not inconceivable that one of the race venues could have gotten snow after the start of the race season.

bluntaaronr (Jul 8, 2019 at 8:47)
@zyoungson: It snowed in Park City Utah on June 22nd and the ski resort on one side of the mountain was taking skiers to the top where on the other side they were taking mountain bikers a little more than half way to the peak.

paulskibum (Jul 8, 2019 at 9:43)
It snowed during practice at Lourdes a couple of years back didn't it - not actually on race day though.

pimpin-gimp (Jul 8, 2019 at 5:44)
Just thought I’d pop up to say those scribd links work fine, and that I could clearly read everything I wanted to. I don’t get the hate.

Steventux (Jul 8, 2019 at 6:22)
No problems with school toilet paper either? Don't tell me... Linux desktops are awesome? Never get thirsty on a Capra?

pumpjumpnflow (Jul 8, 2019 at 9:20)
@T-Bot: Can you elaborate further? Not trying to troll or anything but I've never had an issue using scribd on mobile yet so many other people seem to.

T-Bot (Jul 8, 2019 at 15:06)
@pumpjumpnflow: not a problem. it’s a window in a window that’s an issue. With the touch screen on my iPhone (all models, and I have a new one) the page scroll is an issue. Having to scroll down in scribe usually results in the pink bike page scrolling down. The same goes for zooming in, I zoom and scroll on scribe and the pink bike window moves. With the huge amount of data on the race results it makes it very frustrating to read easy and quickly.

Rucker10 (Jul 8, 2019 at 7:45)
Didn’t get the response you wanted before so you thought you’d try again huh? Gee steal your boyfriend or something?