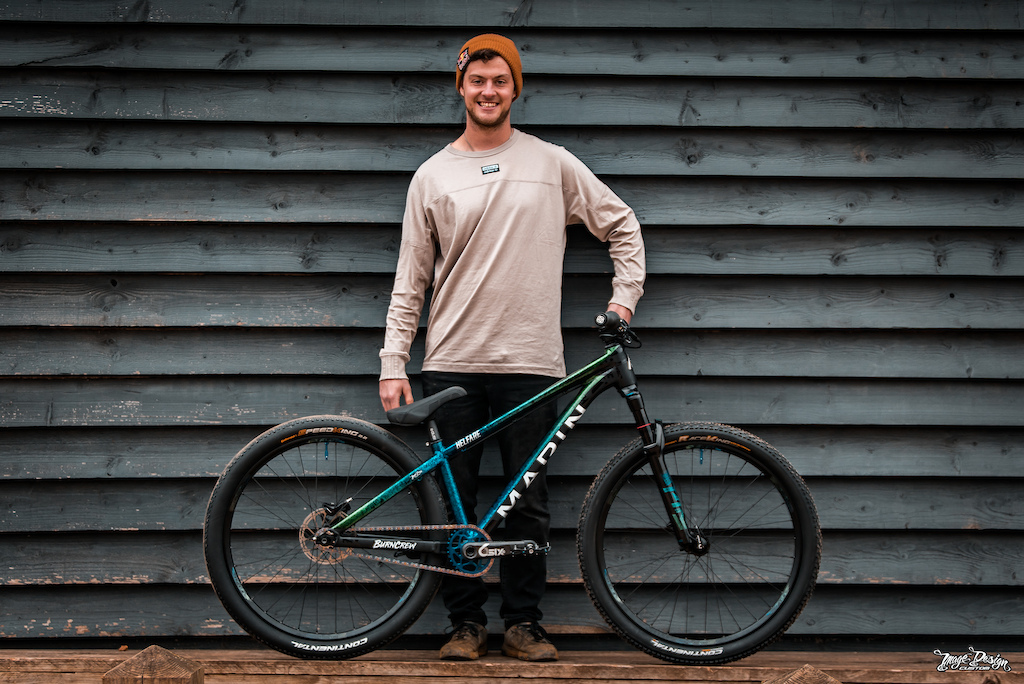 Photos: Image Design Custom
Matt Jones is no stranger to a good looking bike. From diamond-encrusted hardtails, to the one of a kind mini bike death trap, Matt has a well recognised fleet of toys to ride.

It was on one early spring afternoon, that we’d got word of a new project Matt was working on in partnership with Ford. We were on a need-to-know basis from Red Bull and all they told us was ‘this one is going to huge’ and there were plenty of mentions of ‘world firsts’. Knowing the calibre of projects Matt comes up with, especially one that was in partnership with Ford, an idea was struck to create the ultimate bike for this unknown project, all without him having a clue about it. There were suggestions thrown into the pot, but we inevitably ended up on the one bike that Matt himself helped to design. The Marin Alcatraz was designed from the ground up to be the best dirt jump bike ever created. Using this same philosophy, we worked with Marin to come up with the perfect paint job.


We took all of the things that are the most important to Matt and turned them into a design. It only takes a quick scan of Matt’s YouTube channel to know what’s special to him and after a heavy brainstorming session, with far too many coffees, we had our shortlist. It was easy enough to figure out what to include, but then came the predicament of how to include them in a paint scheme. The Marin Alcatraz doesn’t exactly have acres of space to paint on and whilst the initial shortlist seemed simple enough, we then had to figure out how to include a car, Burn Crew and everyone’s favourite dog Moose.

With some cunning strategies and a few secret industry techniques, the bike was ready for paint. Before we took out any spray guns, the bike needed to be stripped back. It would’ve been easy enough to take some paint back, but when you’re Matt Jones, those few extra grams can make all the difference when you’re throwing yourself off monster booters. We also had the words ‘world firsts’ ringing in our ears and knowing how critical those marginal gains could be, the paint was stripped all the way back to the bare metal, all with the careful consideration to the frame itself. 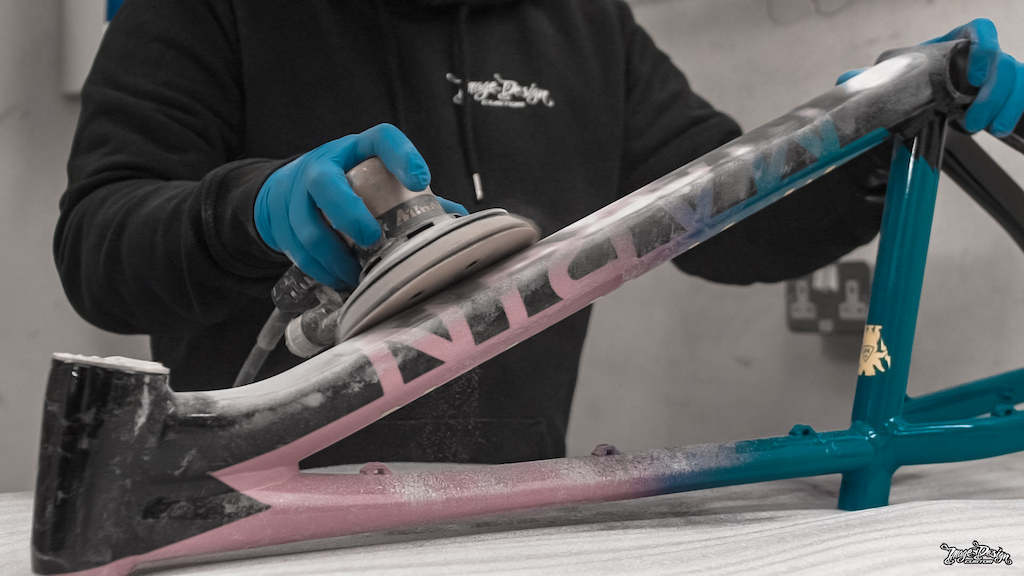 Once the bike was stripped, we went in with the primer and base coat as the first step to turning the idea into a reality. The next step was to mask out the first part of the design, all with meticulous precision. We use a combination of masking tape and a flexible tape mask, that can be precision-cut to ensure we can create the cleanest lines possible on the design. 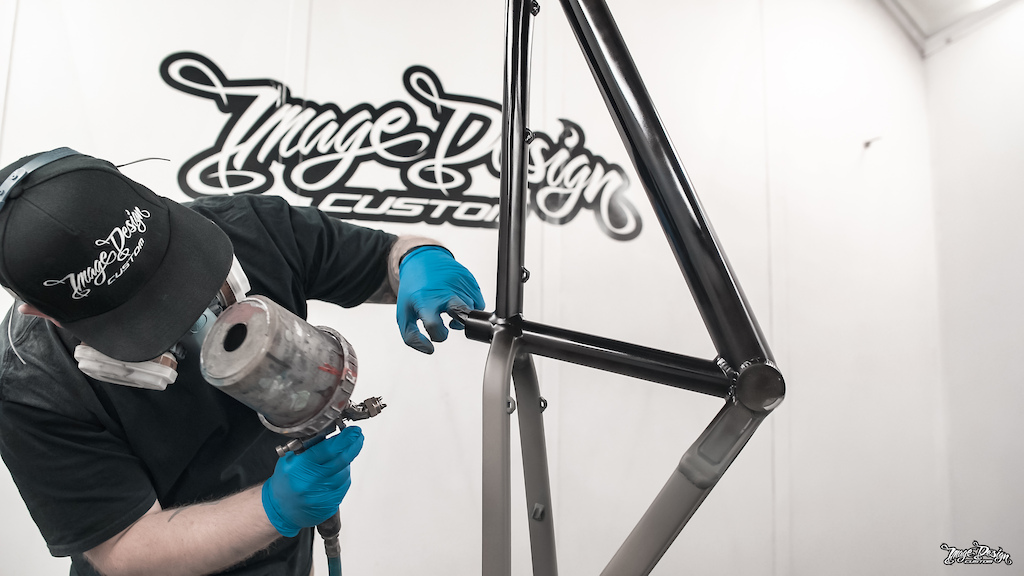 With the masks in place, it was time for the first lick of colour. Whilst you’d think we’d reach straight for a spray gun, this isn’t any old bike. The first layer was a metallic silver but applied with a plastic bag. This may seem a weird technique but through careful application, a few silver splodges eventually turn into a faux marble effect across the whole frame. The next step involved applying coloured inks to the frame over the metallic silver that created a 2 tone finish down the length of the frame. 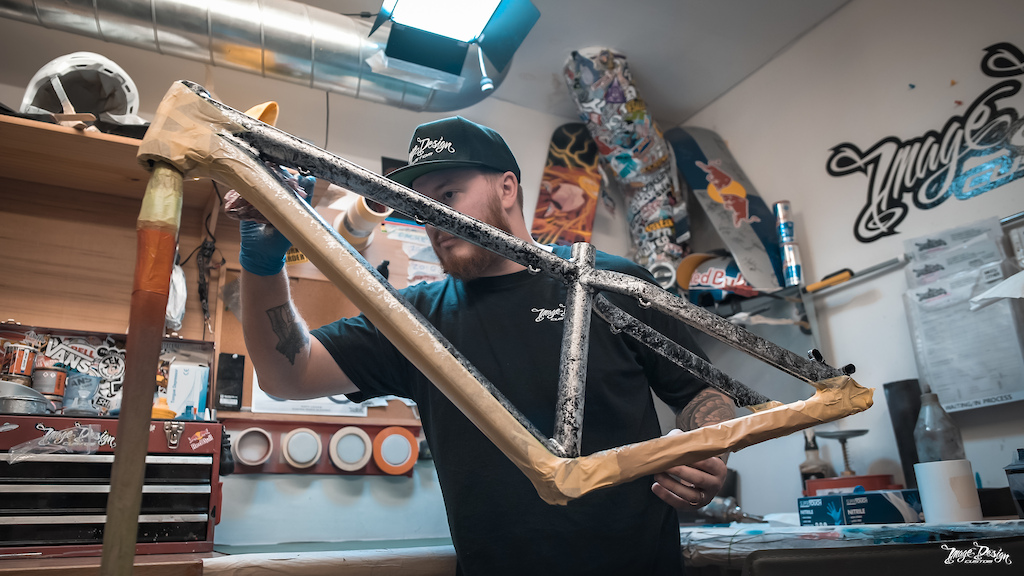 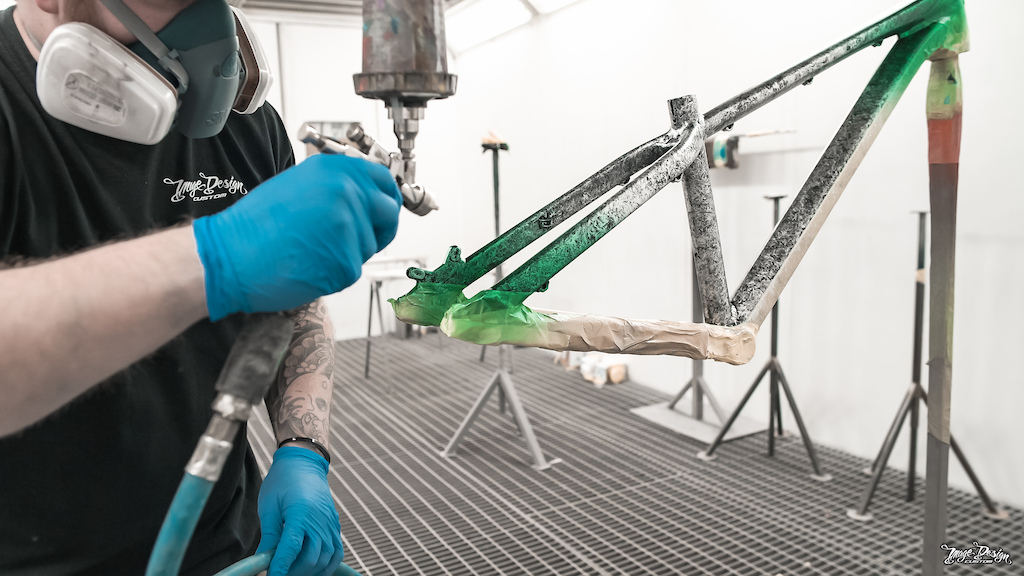 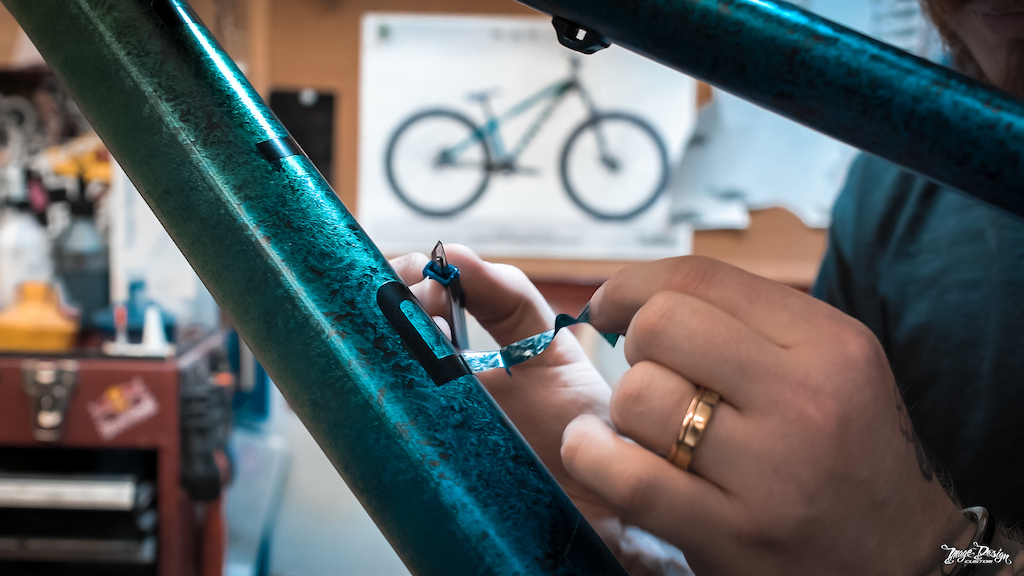 After the paint had dried, the masking all got stripped off ready for the next layer and even more masking! There are no corners cut here and we’ll always give this much attention to anything we do, even if you’re not Matt Jones. As this one was for Matt, we added a bold Marin logo, along with a nod to his brand Helfare and the Burn Crew. 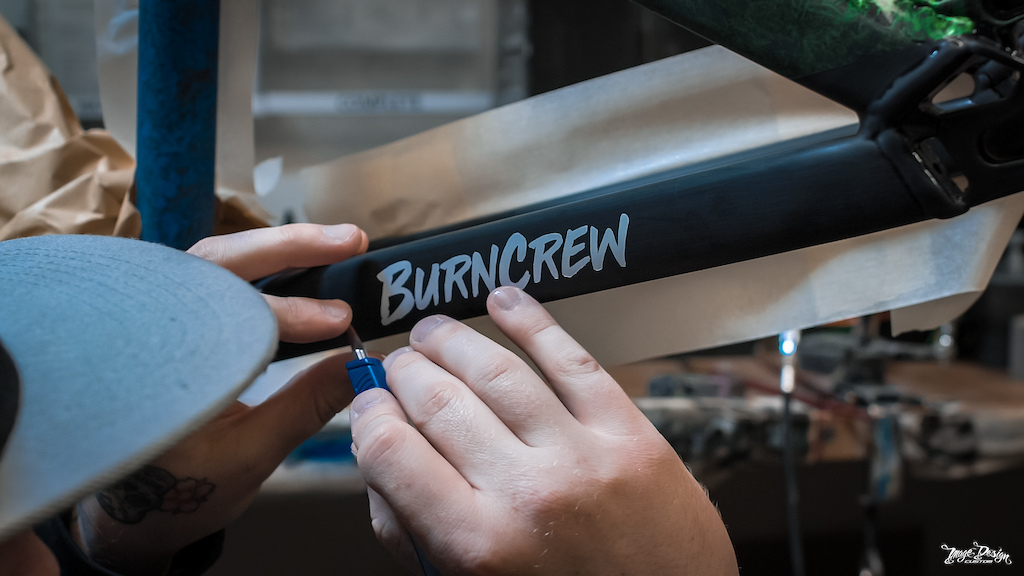 The bike was starting to look more and more like the concept we’d envisioned and the last part was the all-important details we’d spent many hours discussing. We didn’t want the details to be bold by any means, but visible enough that they’d give Matt some good vibes when he finally got to ride this bike. Nothing better than having the things that are important to you when you’re throwing down tricks that have never been done before. The final detail was achieved by adding even more masking and brought to life with a contrasting matt and gloss finish. 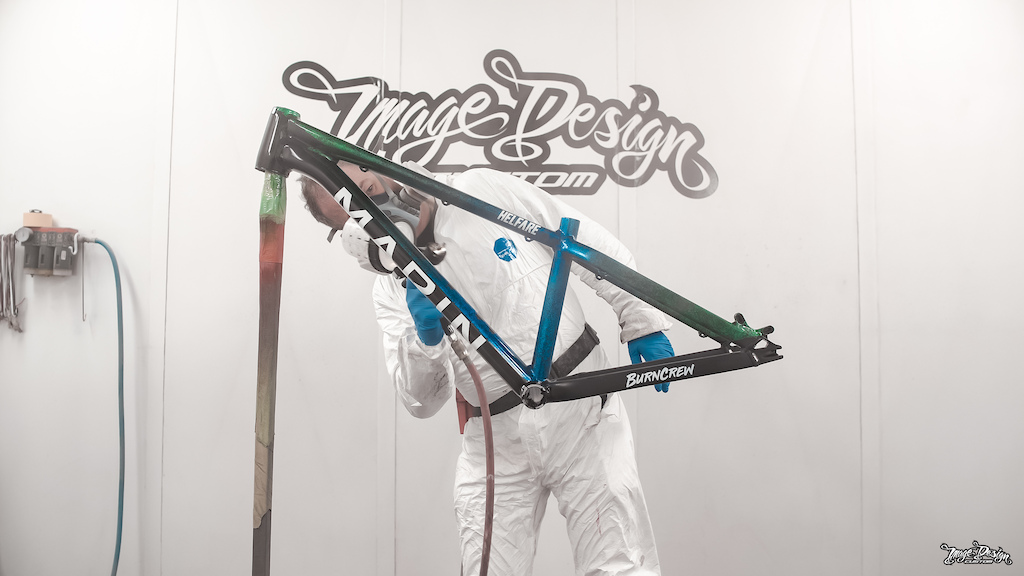 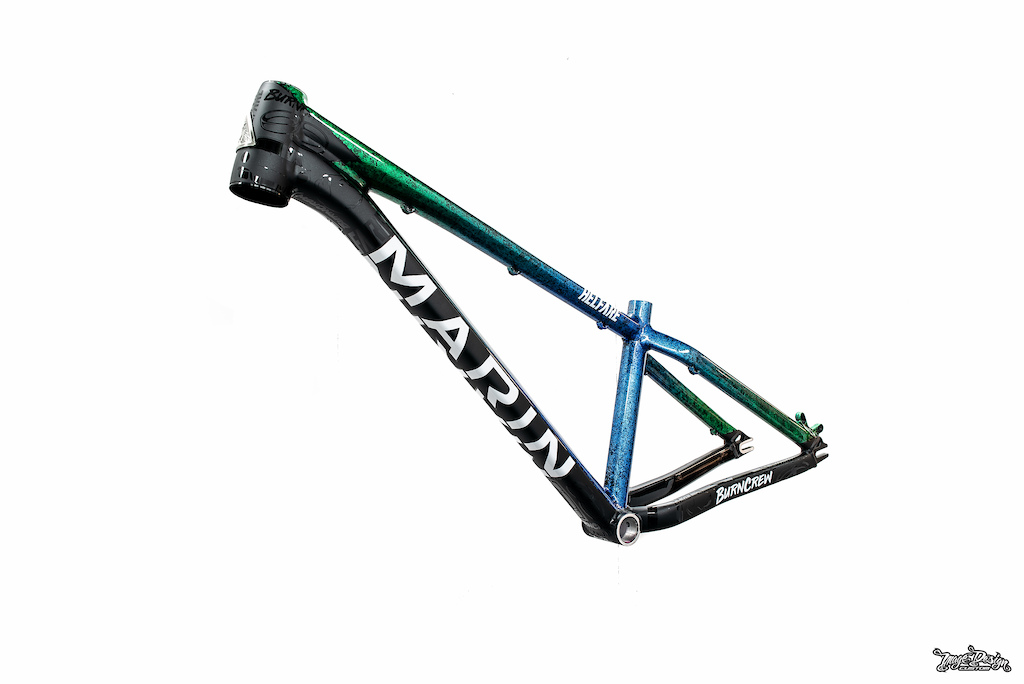 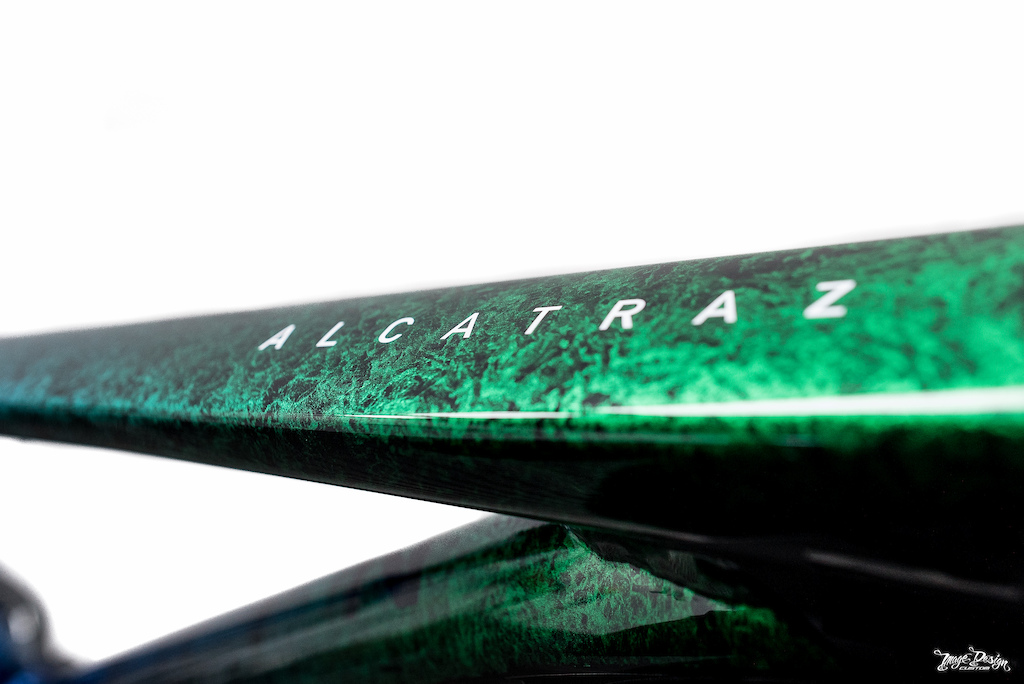 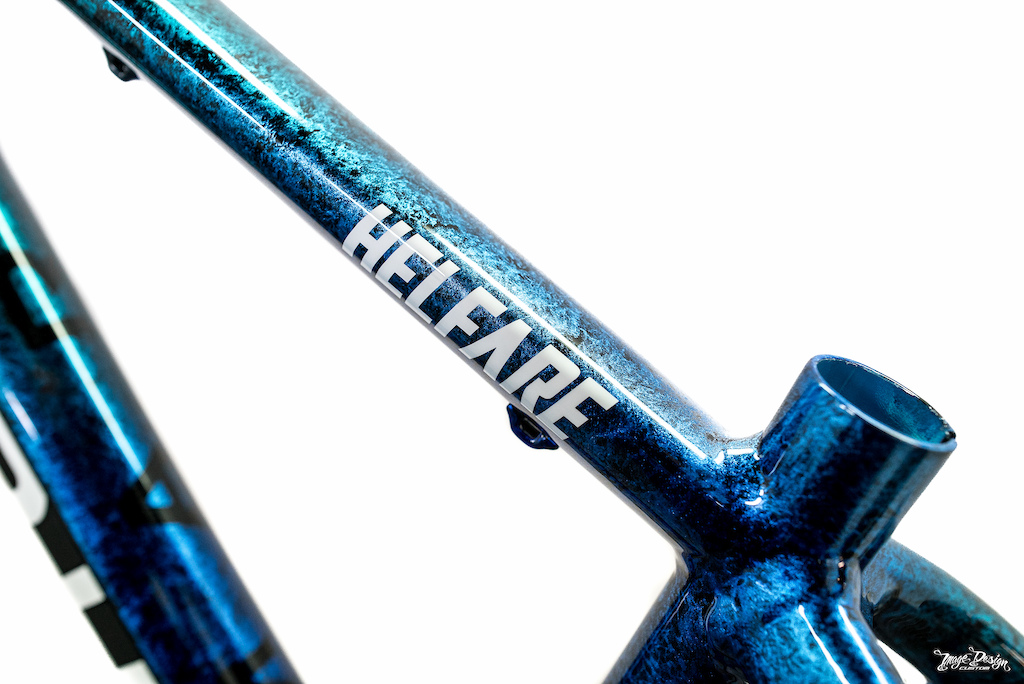 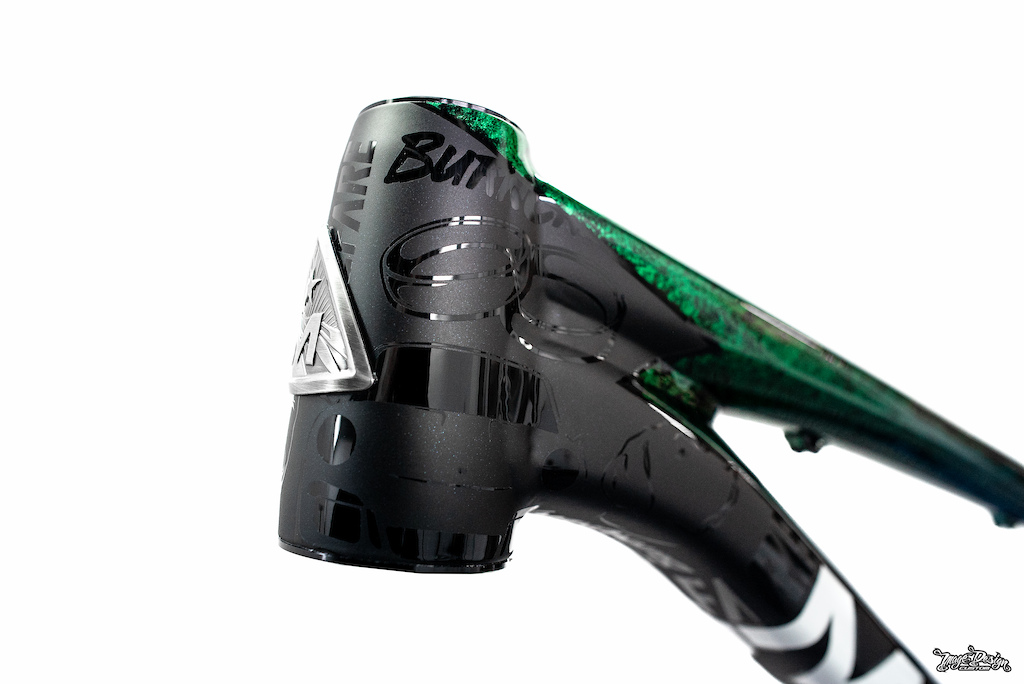 With the paint finished, it was off to Brink Cycles where we handed the frame to the capable hands of Fin, to bring the bike to life. There were still a few custom additions on the bike to be added, including colour matched forks, wheels and valves. The bike was finished with Matt’s preferred choice of parts from his sponsors. 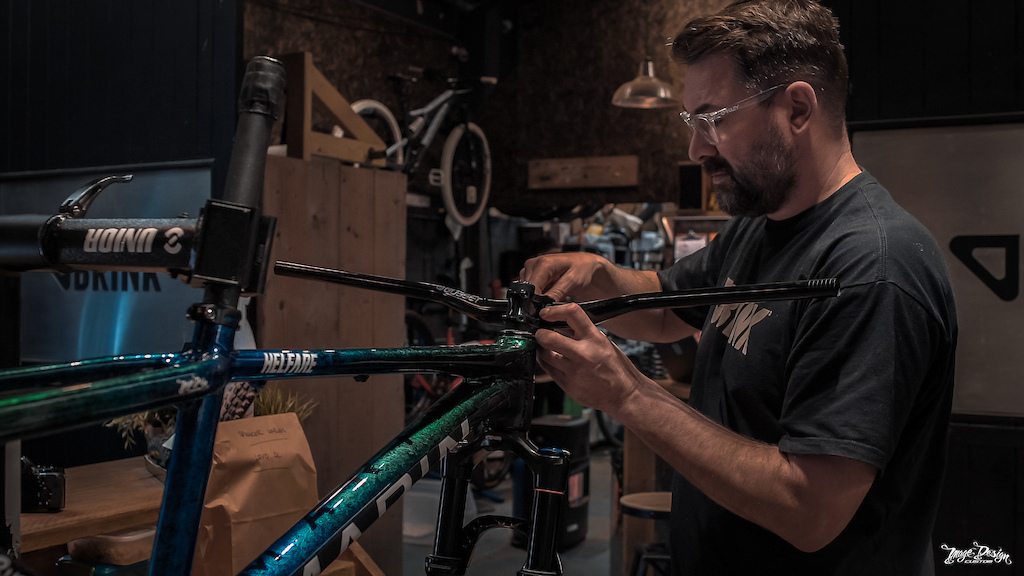 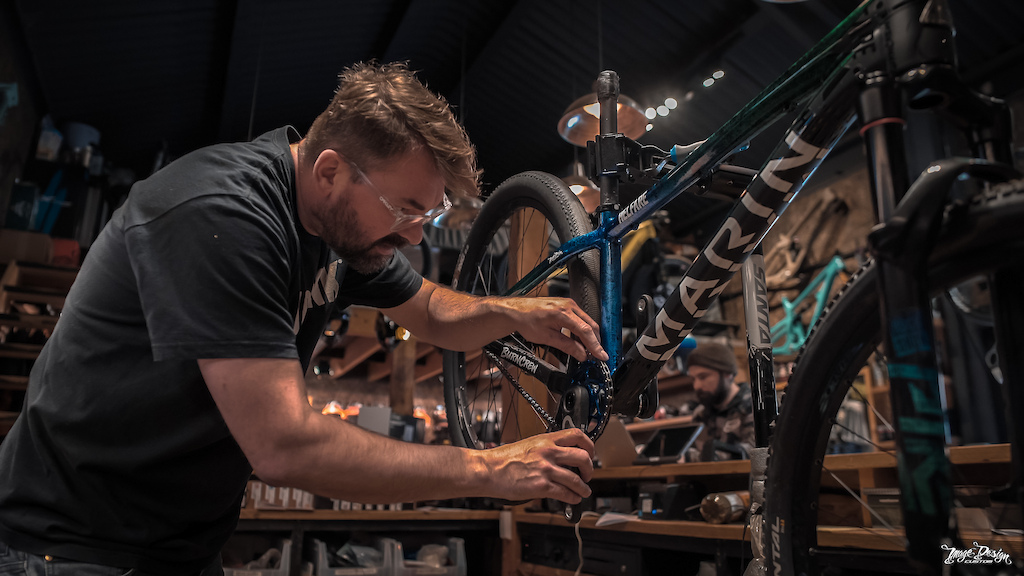 The final reveal with Matt came a mere 30 minutes after the bike was finished and it was Matt’s reaction to the bike that made the whole project worthwhile.

Due to the various restrictions around the world during these trying times, this bike has sat in Matt’s living room for the past few months waiting for the green light. There’s nothing worse than planning a super-secret project, only for it to be put on hold by a global pandemic. But here we finally are. 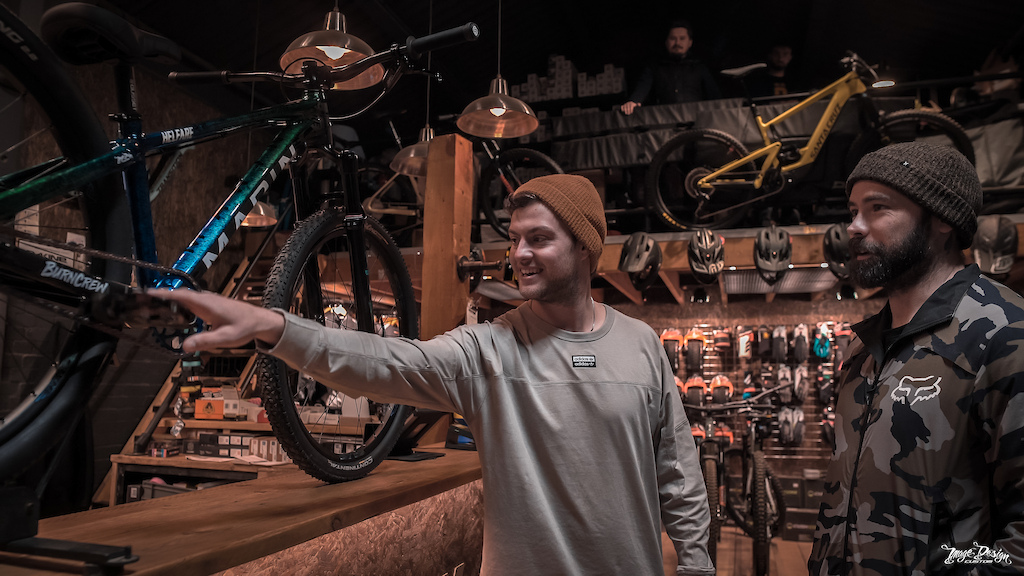 We were insanely stoked to be a part of this project and you’d be surprised how hard it is to keep a secret from Matt Jones. We’d like to give thanks to John at Marin for being the ring leader in this and he had a few words about the project: 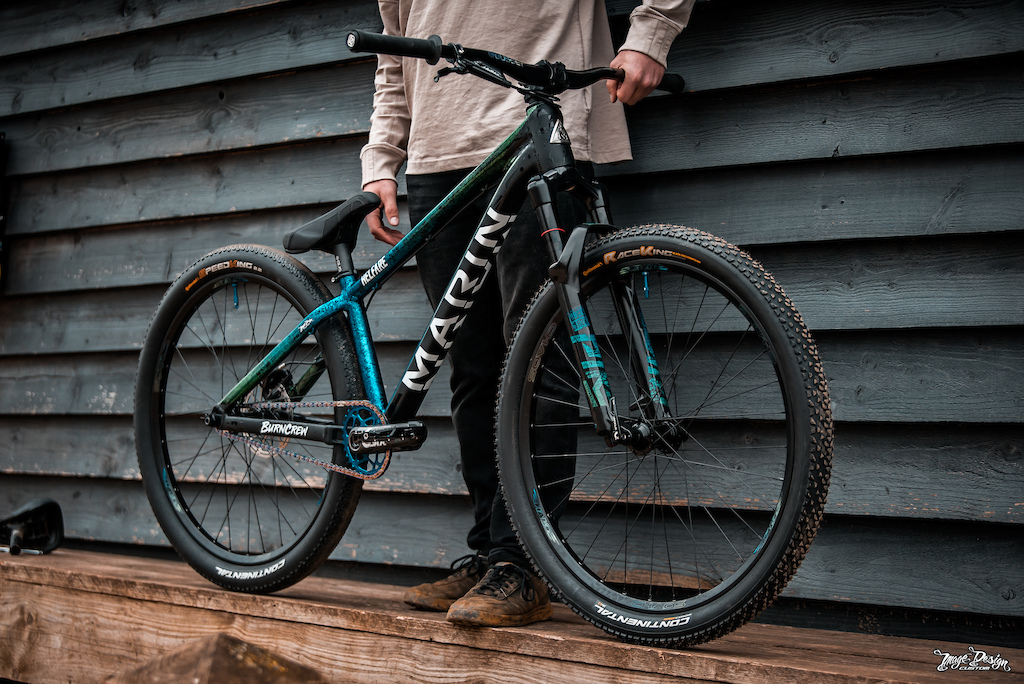 We should also give thanks to Kenny at Ison distribution for the quick turnaround on parts, Jack our painter who is an absolute wizard with paints and of course Moose the dog, just because he’s a good boy.

For any custom paint work enquires, contact us at: info@imagedesigncustom.co.uk

Willyb911 (Jan 21, 2021 at 4:56)
I wonder why sponsored riders don’t ever ask there frame supplier for an unpainted frame for these projects, save all the prep time of having to sand the old paint off? Or is that to much sensible thinking?!

maglor (Jan 21, 2021 at 6:37)
Most brands probably don't even see an unfinished frame, the east churns them out all finished, would probably be more hassle to specially request one to be removed from the production line before being finished.

willdavidson9595 (Jan 21, 2021 at 6:49)
Because you aren't asking your frame sponsor, your asking some factory in China and they don't give a crap. Orbea does paint their own frames however and you can see why.

MarinBikes (Jan 21, 2021 at 9:27)
Great question! We manufacture the vast majority of our frames in our own factory, including the Alcatraz frames. However, due to supply chain lead times, it's often faster and easier for us to pull a painted frame for a sponsored rider from our sales or warranty stock than it is to request a raw frame.

maglor (Jan 21, 2021 at 10:32)
@jaame: maybe wouldn’t be too difficult but the other factor is timescale, most frames will be sent from the factory on the sea in a batch as it’s the most economical way so even if you stuck a raw one in it would still be 4-6 weeks.

korev (Jan 22, 2021 at 0:01)
@MarinBikes: It's good to hear your sponsored riders use the same frames as the ones us crappy riders can buy instead of some sneakily rebadged frames

MarinBikes (Jan 22, 2021 at 5:42)
@korev: Ha, indeed. Other than a few instances where we have our sponsored riders out on developmental prototypes, they are out on production frames. One recent exception was Vero Sandler, who needed a DH frame for a few events. We just purchased a frame from another brand, painted it black, and she rode it without any branding.

chriskneeland (Jan 21, 2021 at 4:40)
The only part I cared about was how you got all the paint off the corner welds and you didn't even show it.

ImageDesignCustom (Jan 21, 2021 at 5:08)
Good old fashioned sandpaper! Takes a while to get those last little parts, but every gram counts when you're stomping world firsts.

maybenotaprofile (Jan 21, 2021 at 7:50)
There are oval chainrings which do not alternate the chainlengt - the rear derailieur-cage (if existing) is not moving through the crank cycle. Shimano's Biopace worked like that but I didn't find anything about the AB ones. But it has to work somehow I guess.... If chain lenght problems is what you're referring to

swenzowski (Jan 21, 2021 at 7:55)
Matt has addressed this in a previous bike check. I don't know how it works but he says he prefers oval chainrings and unexpectedly they "work."

Don't ask me how lol

seraph (Jan 21, 2021 at 9:48)
@maybenotaprofile: You might notice that this bike doesn't have a derailleur though. Where is your god now?

maybenotaprofile (Jan 21, 2021 at 14:54)
@seraph: exactly thats my point with those brackets (if existing). When a derailleur ist not moving, you have an indication for a constant chainlenght at the rear end, so for a single speed no-suspension rear end you can get rid of any derailleurs and other chain tensioning devices. No matter at which point the cranks are, the chain is contacting the same amount of cahinring teeth. Sorry, I can't find sources right now it was just a simple thought anyways.

JockoJones (Jan 21, 2021 at 15:47)
@maybenotaprofile: You are correct, the distance a chain travels on a oval or round chainring with the same amount of teeth is the same. Its the leverage that changes as the ring rotates.

Monster-G (Jan 22, 2021 at 22:46)
@JockoJones: Finally someone who actually knows what the function of the oval chain ring is and why and not ignorant enough to believe the oval would result in a varied chain length...some of these comments are just dumb as hell.