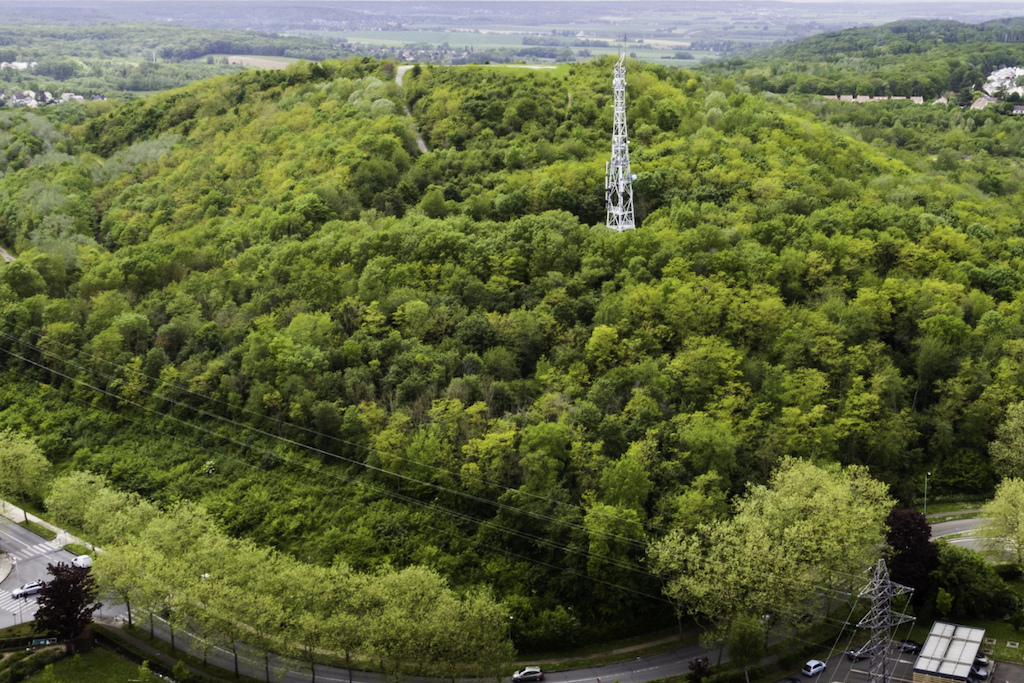 The 2024 Olympic mountain bike cross country event is to be held on an artificial hill 35 km southwest of Paris.

The Colline d'Elancourt is the highest point in the Ile-de-France region, rising to 231 metres above sea level at its peak with around 80 metres of elevation. The hill stands on the site of a former quarry that became a dumping ground after the Second World War. It was filled with excavation material, earth, car scrap and rubble from the development of the nearby town of Saint-Quentin-en-Yvelines until it reached its current height in 1992 when it was designated as a landmark and hub for outdoor activities. The hill overlooks the city of Paris and apparently the Eiffel Tower can be seen from the summit

The site was first earmarked as a potential venue for mountain biking during Paris' failed 2012 Olympic bid and a network of trails have since developed there culminating in the National Championships of the Fédération Sportive et Gymnique du Travail in 2016.

The last race held on the hill was the National Championships of the Federation Sportive et Gymnique du Travail in 2016, hopefully the 10 million Euro of allocated funding can be used to vastly improve the trails and create a course to rival the Izu Peninsula track from Tokyo.
Environmentalists have apparently been protesting against the use of the hill, and Chamonix was floated as a possible alternate venue, but the proposal was set in stone after minimal deforestation and construction were promised. Local media is reporting that a further €10 million of work will be carried out on the trails before the 2024 Games to bring the course to life. Nick Floros, who worked on both the Rio and Tokyo courses, will design the new course that will apparently be 95% based on the current trails. After the Games, an 18km green trail and skills area will be open and available for use by the public.

DoubleCrownAddict (Aug 20, 2021 at 11:45) (Below Threshold)
Will be especially uncomfortable if they win on a YT.. With their use of the Nazi rune symbols.
www.pinkbike.com/u/DoubleCrownAddict/blog/yt-marketing-the-most-offensive-mysogynist-violent-pro-trump-company-in-bicycle-history.html

powturn (Aug 21, 2021 at 1:42)
Environmentalists protesting alterations to artificial hill made of garbage? You just can't write this stuff.

whambat (Aug 20, 2021 at 14:36)
@pdxjeremy: a serious missed opportunity if they don’t make it a dystopian pos-apocalyptic theme.

whambat (Aug 21, 2021 at 3:33)
@pdxjeremy: yup. Fire from methane vents from the dump and madmax costumed fans along the course would really pull it all together.

wilsonians (Aug 20, 2021 at 10:43)
Hopefully the French take pointers from Tokyo and not London or Rio for their course construction. Tokyo built an outstanding XC course that really reflected the times of increased technicality and it made for some awesome racing. That video doesn't give a ton of footage but my guess is they will have plenty of terrain to make a world class course.

wilsonians (Aug 20, 2021 at 10:52)
Aaaannnddd I just read further where it says the guy that worked on Rio and London will be designing it....hopefully he has learned a bit since then. 95% based on current trails. If the video is anything to go off of, those trails leave A LOT to be desired for an Olympic caliber event. I hope I am wrong.

wilsonians (Aug 20, 2021 at 11:19)
@Chilternburt: Oh yup, misread that. Thats a good sign. Hopefully he can build some good stuff even with having to use the existing trails which look less than inspiring in that video.

jeroenk (Aug 22, 2021 at 12:20)
The French have a nationwide history of building the most awsome tracks in all of MTB disciplines. It's the Olympics though: You never know what nitwit official decides to be the boss and make things dull.

drunknride (Aug 20, 2021 at 10:57)
Environmentalists are concerned about deforestation of a former quarry and city dump? What the hell?

jayacheess (Aug 20, 2021 at 14:51)
My first thought as well. I'm pretty big on environmental protection, but this is literally a pile of garbage with trees on it.

I didnt decide on Tahiti

iammarkstewart (Aug 20, 2021 at 23:55)
Based on how well previous sites have used...or torn down...their facilities in the recent past, this sounds like it has a faint glimmer of actually being kept around and actually being used. As for cost, it's the Olympics and IOC, so if you have to ask...

scott-townes (Aug 20, 2021 at 10:33)
"The hill stands on the site of a former quarry that became a dumping ground after the Second World War." I hope a German doesn't win because it'll be awkward... you know, history repeating itself and all.

conoat (Aug 20, 2021 at 11:13)
@scott-townes: when the German team rides into the venue, all the French riders will instinctually run in the opposite direction.

catweasel (Aug 20, 2021 at 11:41)
If we were to continue this ridiculous analogy then the American team would have one rider stay at home because he didn't see value in taking part in something so far away, another procrastinating at the start line, one hiding in the bushes and another actively cheering for the Germans from the start of the race. That is unless the Japanese team slashed their tires a couple of days before....

steprinceoman (Aug 20, 2021 at 23:02)
If the Vancouver Winter Olympics can have the snowboard events in Whistler (2 hours away) , why cant the mountain bike events be further afield. The Izu Mtb Course for the Tokyo olympics was 128km away from Tokyo (over 2 hours away).
Get out of Paris and there is loads of great natural mountain-biking in France. That location looks like a pile of .....

JiminOz (Aug 20, 2021 at 17:02)
Hmmmm...the Alps, or a man made hillock made out of crap. If it's supposed to be the ultimate contest, run it on the ultimate trails. This is why the Olympics are a joke. No longer a credible sporting event, just a massive cash machine.

jeroenk (Aug 22, 2021 at 12:25)
Your memory is quite short. The Tokyo track was pretty badass and man made too... What does it matter if the hill is artificial or real if the trails are built anyway? The altitude differences do not seem to be all that different to Tokyo.

jeroenk (Aug 23, 2021 at 1:41)
@JiminOz: Sure, but you'll find that lots of race venues (including world cups) are in hilly terrain that you cannot really call mountaineous. It doesn't really matter anyway, as they are never going to incorporate a climb longer than like 5 minutes.

A mountaineous location like Chamonix also does not necessarily mean a 'true to MTB' course. Look at Val di Sole: The DH track is one of the most badass ones, but the XC track is in the valley and up unitil recent years was relatively tame compared to other tracks.

I do hope there's some rocks, roots and other difficulty to be found over there. I like to see MvdP win it, but it shouldn't be a glorified cyclocross race.

JiminOz (Aug 23, 2021 at 4:25)
@jeroenk: Take a look at the video from 2016 in this article. Barely any elevation and short grass with a groove worn in it. How is that going to challenge the worlds best?
My point was there is plenty of terrain and tracks already in France to prove worthy of the best XC riders in the world, without the need for building inadequate locations for the event.
I've actually ridden a couple of world cup level XC tracks. They were hard, big climbs and very technical in places. As they should be.

jeroenk (Aug 23, 2021 at 7:54)
@JiminOz: Yes, they should be, but don't judge too soon. This kind of video footage is often shot at very accessible points, as far as I could see near the start finish and at some spot the riders exit a descent.

absentminded (Aug 20, 2021 at 10:52)
What are the chances the course will be tailor made for a crazy-good French climber like Lecompte?

quentos (Aug 21, 2021 at 7:16)
As a local, I'm quite saddened by this decision, Chamonix first would be the obvious choice temple and would showcase more of France's diversity of landscapes, the games are said to be Paris centric (But surf competition will be held in french Island of Tahiti roughly 15000 kms from paris or 10000 miles, but of course there is no possible surfing in paris this kind of makes sense though way closer Lacanau would be a better choice as weel) There are many very nice and way better already existing trails arround Paris, for exemple the forest that arrives to Versailles or the hill of Meudon would be in my opinion better options with stunning views on Paris while staying in the forest. Those upcoming games are mostly going to be held in some poor locations I cannot figure why.

ski-bike-repeat (Aug 22, 2021 at 8:36)
I'm a Chamonix local. There is no appetite in Chamonix for the Jeux Olympique. The organisers demand exorbitant financial commitment that can not be justified. I say this a huge fan of the Olympics, but they have grown to self important as demonstrated by the fact that the Olympic Committee demand to treated like Heads of State

DylanH93 (Aug 20, 2021 at 11:28)
Take that climate change! Oceans may raise but we'll just live in giant cities on top of our trash hills! We've got something like that near us. Giant dump, the view is actually pretty nice from the top lol. Plans are to cap it off then start residential building.

chacou (Aug 20, 2021 at 11:57)
Interesting, I've been lobbying City and County of Denver for trails in an open space that was on an old waste transfer station. They balk because the methane emissions are apparently too high at the site to be encouraging people to recreate back there, however there's some fun social trails back there, so maybe better that way anyhow.

forestworker (Aug 20, 2021 at 11:33)
At what point do we start to consider dropping the “mountain” from mountain biking? I mean based on a lot of courses and riding areas out there, I don’t even think we can call it trail biking. When the “technical” parts of the course are more man made than natural, aren’t they just riding off road tracks between pseudo trials features?

OllieB278 (Aug 20, 2021 at 22:38)
In Stockholm we have three uplifts on 'artificial hills' and trails at another three or four. Some of the best tracks around. Short that uplifts where you can smash 1000m descending per hour! The place is garbage but the tracks are mint

Afterschoolsports (Aug 20, 2021 at 13:32)
This is a smart move as France appears to be completely devoid of any hills of substantial height.

SebIsen (Aug 20, 2021 at 13:55)
What a stupid idea to organize this on a hill of trash. Around Paris there are better places and otherwise at 1 hour Reims, 2 hours the Ardennes and 3 hours the Vosges.

VictorGouy (Aug 23, 2021 at 2:49)
Yep, agree with that. Or at least the Fontainebleau forest would be very fine for a xc race, it's just about 1 and half hour from Paris center.

FMHUM (Aug 20, 2021 at 11:41)
What the hell is an 'artificial' hill? From the description about a part of the ground being at a higher elevation than the surrounding areas of ground connected by a continuous and sloping elevation change, that place kind of just sounds like...a hill.

Venturebikes (Aug 20, 2021 at 13:03)
I made a comment a few weeks back, stating that I believed that Enduro/DH could never make it as an Olympic event due to the potential lack of elevation in host countries... Guess I was wrong lol

suppsy754 (Aug 20, 2021 at 10:34)
Hopefully they compensate by adding some more wood features, since that went so well at the last Olympics

Make it interesting, don't tell the racers if and when they'll be removed.

retrobobi (Aug 21, 2021 at 1:33)
Completely stupid idea while there is so many mountain with existing track in France!

headshot (Aug 21, 2021 at 4:11)
Are the environmental activists concerned about some trash being unearthed during the build?