Bike shops that service a lot of fat bikes, or fat bike riders who prefer to get the job done on their own, take note: Park Tool's new TS-4 truing stand has been designed specifically for the job. Park's Eric Hawkins explained that while their normal truing stands can be used for fat bike wheels, depending on hub and tire width, the TS-4 has no such clearance concerns.

The stand's uprights can be adjusted to fit hub widths ranging from 90mm to over 200mm by rotating the adjustment dial on its right side, which is wider than other truing stands and spacious enough to fit any width fat bike hub. The wider spacing of the uprights also means that they easily clear disk rotors, not something that Park Tool's other truing stands can say when talking about mega-wide hubs. A set of thru-axle adapters is even built-in, located just below the thru-axle slots. 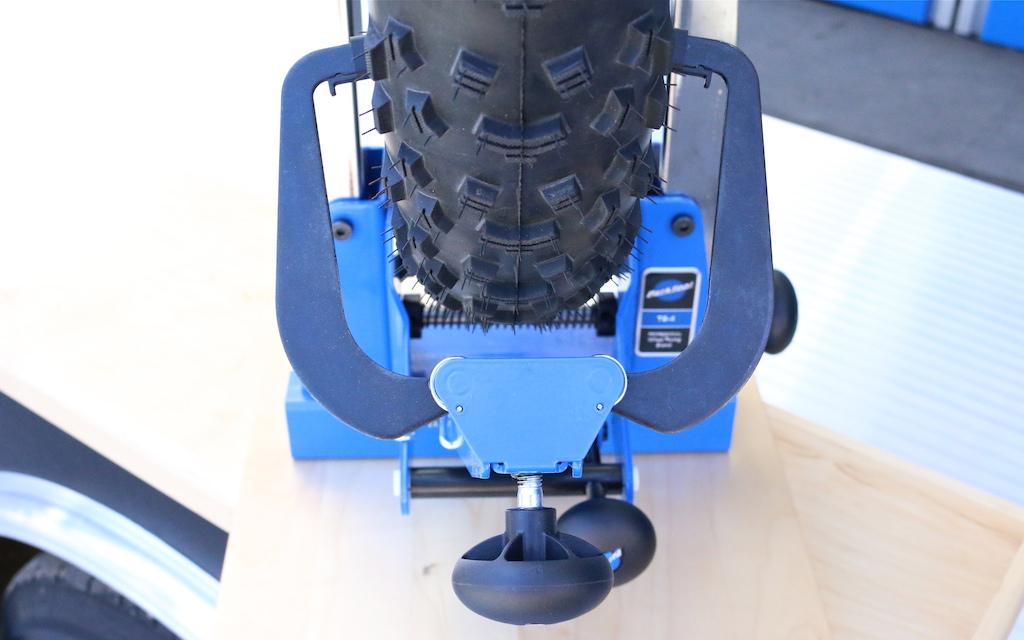 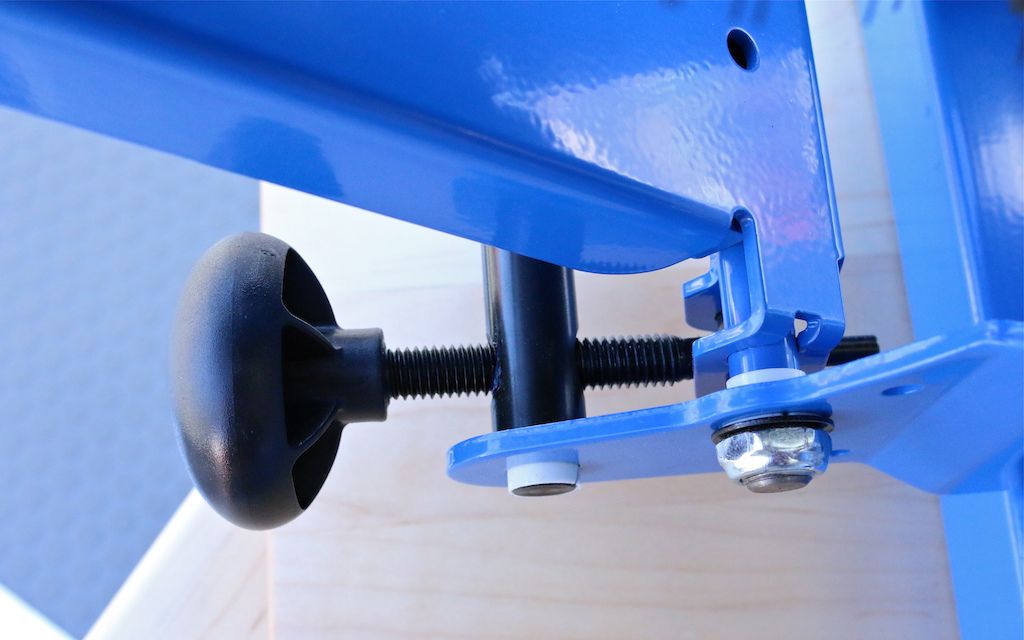 It's not just wide hubs that get along with the TS-4, though, as the feeler gauge's fingers are shaped to clear a massive 5'' wide tire. Park Tool has re-designed the arm's height adjustment system as well, with a true push/pull system whereas the setup employed on their legacy truing stands really just acts as an adjustable stop for the spring-loaded arm.

The $350 USD TS-4, which works fine with normal hubs and wheels, by the way, will be available this coming July.

Anyone who's used a freewheel tool and big ol' crescent wrench to loosen a cassette lockring knows that while the combo works just fine, a one-piece tool would be much nicer to deal with. So that's what Park Tool made. The FR-5H is pretty simple: a long, leverage-providing steel handle is attached to a spline tool that's made to fit Shimano and SRAM lockrings, as well as disc rotor lockrings.

The head can fit over a quick-release nut (not that common on mountain bikes anymore but ideal when working on road bikes), and it's replaceable (part #2301) should you require a freshie after a few years of use.

There are other, more expensive one-piece freehub tools out here, but the $40 USD FR-5H is priced low enough for a home mechanic to consider, not just a bike shop. 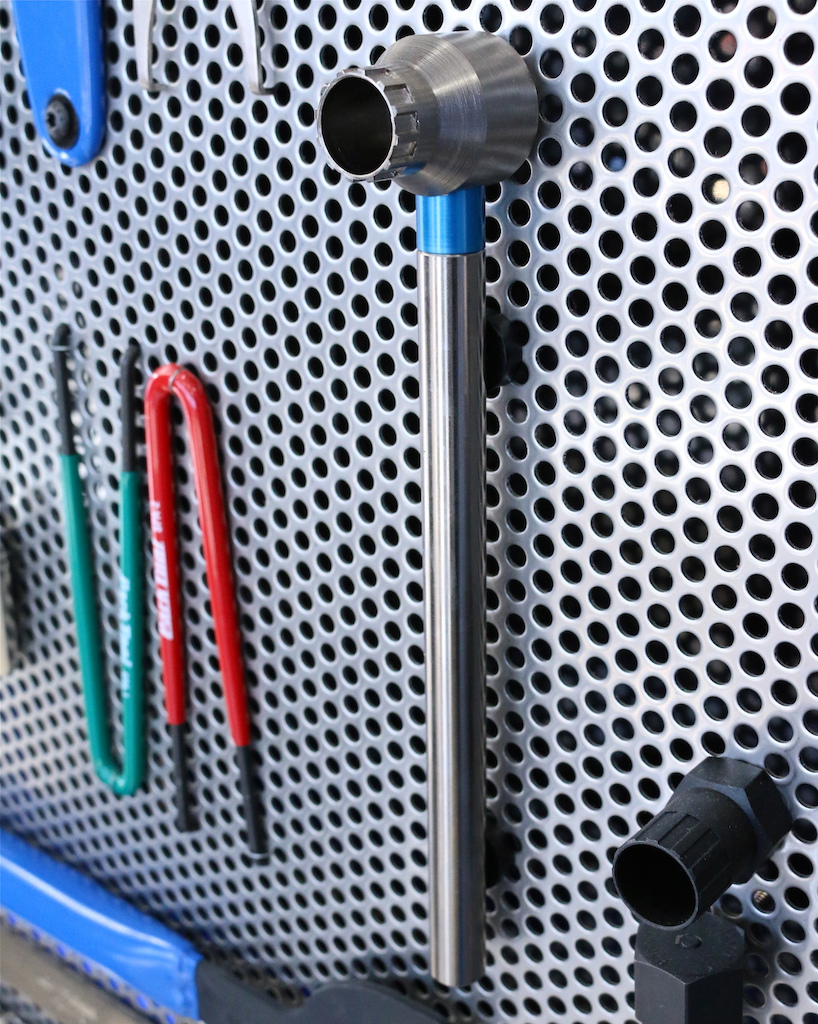 Another freewheel tool, this time one made specifically for bikes with 12mm thru-axles. The FR-5GT's blue post slides right down into the hub's center, helping to stabilize the tool from coming unstuck while you're pushing on the big wrench that you've attached to it. The twelve-spline tool fits all Shimano, SRAM, SunTour, and SunRace lockrings, as well as some similar disc rotor lockrings.

The FR-5GT, which is just one of a handful of Park's freehub tools, retails for a pretty reasonable $10 USD. 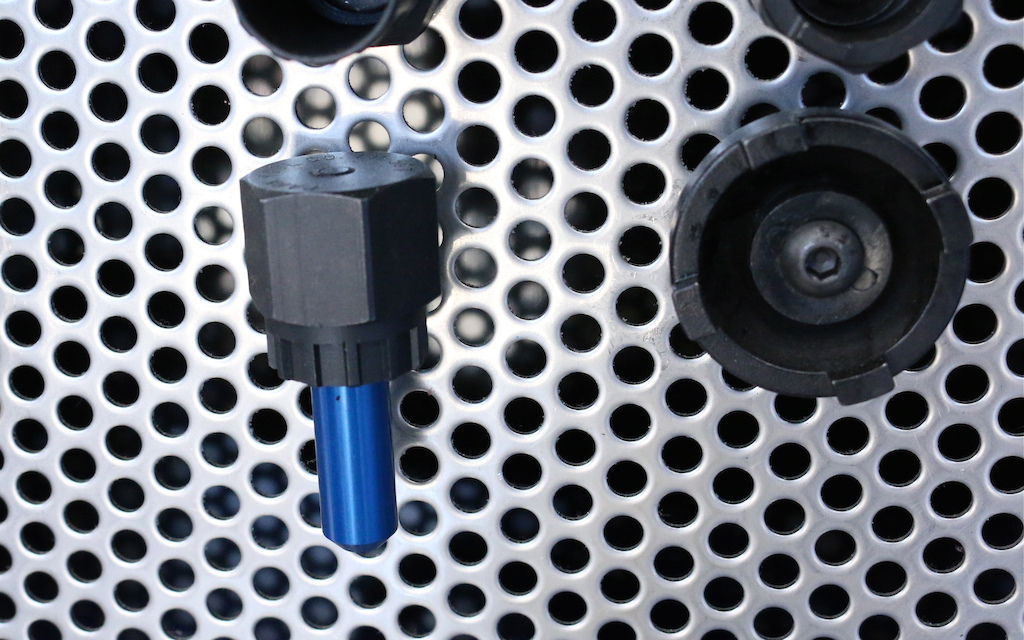 thook (Apr 16, 2016 at 13:01)
@Chrisingrassia youd end up walking into your wall all the time. It would be like you were stuck in the 2nday dimensions

reverend (Apr 17, 2016 at 20:29)
Could just be an Aussie driver's tan. (I would say British, but we know that you get as much sunshine in the winter and spring as we do here between Seattle and Vancouver. Though today was quite pleasant.)

katmai (Apr 16, 2016 at 11:23)
Support those that innovate, not those that imitate! Plenty of Park Tools that I love and am happy to buy and they've done a ton of tool innovation over the years. But I just wouldn't feel right buying the Park lockring tool when the Abbey Crombie that Park copied is just $10 more.

stymiecat (Apr 16, 2016 at 15:52)
If Park Tool was actually smart about their truing stands they would bring back the cast beauty that was the TS3 with some modern upgrades to accommodate fat bikes, through axels and 29er wheels instead of producing the stamped garbage they currently have. I got a ts 2.2 after my garage got broken into and my ts3 was ripped off. And if you want to do anything with their modern stands it seems your bolting on accessories just to make it work. When asked why they stopped making the TS3 a rep from Park said no one wanted to pay the price for the stand.... that is BS! Park ... you make some good tools... but remeber why people bought your stuff in the first place... you used to make Great tools.

slaughterage144 (Apr 17, 2016 at 6:39)
id take a tool set up like that. then again all I have is a borrowed socket set and a small Allen key set. still, the color scheme makes the picture an addicting. like someone walks in there with their morning coffee and works in there all day for a living

akdmx (Apr 17, 2016 at 19:55)
Regarding the lock ring tool -- many lock ring sockets already accept a 1/2" driver like a breaker bar or large socket wrench so put away your crescent wrenches and do it the right way (and without having to buy more tools).

skidrumr (Apr 18, 2016 at 8:36)
Of course the trailer display is spooge-tastic, it is set up to make all us monkeys drool for their stuff, not for real use. Like a staged house that's for sale, what looks amazing isn't necessarily livable. My wife is another example. (I'm joking, kids!)

Motivated (Apr 16, 2016 at 12:01)
I just damaged the integrated lockring on my XX1 cassette installing it on a new Hope Pro 4 boost hub. It didn't engage deep enough and cammed out. I'm buying that FR-5H and hope it works.

groghunter (Apr 16, 2016 at 15:32)
@gvaughan: if you look close, you can see the mounting studs, especially behind the presses & reamers. the tools aren't removable from the wall(less exciting for us, but I'm sure the park guys are happy to not have to put them up before every show.)

We store all our cutting tools in roller drawers, resting on foam inlays

DrPete (Apr 16, 2016 at 13:08)
I'm assuming the FR-5H works with XD cassettes, but can someone confirm? There was an older generation of the FR-5 that wouldn't reach far enough.

rivercitycycles (Apr 16, 2016 at 11:06)
It's always the small tooling design companies that innovate long before the big tool companies. It took Park years to come out with a solution to tru thru axle hubs.

rivercitycycles (Apr 16, 2016 at 11:16)
@SteveDekker: I didn't say anywhere in my post Park tools were substandard. I merely said small tool companies are more innovative and I stated one fact.......thru axle hub adapters to allow wheel builds and truing for thru axle hubs. I own a lot of Park tools along with my own.

SteveDekker (Apr 16, 2016 at 11:20)
@rivercitycycles: Sorry I was actually responding to @macross87, alluding to the fact that Abby only makes 5-6 types of tools. I do really want one on their $150 titanium hammers though.

macross87 (Apr 16, 2016 at 11:36)
@SteveDekker: I, too, was expressing my desire for Abbey's tool. I didn't say that Park tools are not required. Just that their version of the cassette tool appeals to me more. Parks price is tempting too.