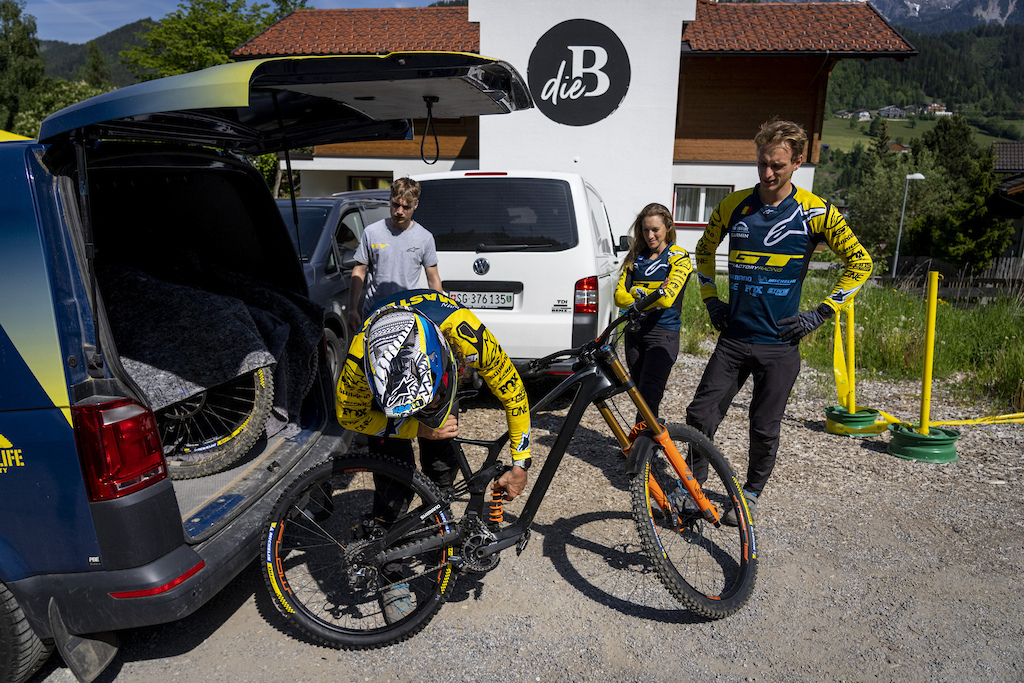 Back in April of this year, a new bike from GT broke cover under some of their riders. The bike, seemingly capable of running anything from Fox 36 to a 40, was an interesting proposition. It was definitely a new frame, but working out where it would sit in GT's range is something else entirely. The bike seems to sit somewhere between the Force and the Fury, and could even be a relaunch of the Sanction platform. This week it looks as if that same bike, which has a carbon front triangle and aluminum swingarm, is being ridden under Noga Korem and Wyn Masters at the NotARace IXS Test Cup Sessions.

GT are not the first to go down this boundary blending route. It's an ever more common trend to not only see enduro bikes being rated for downhill forks but also team riders taking advantage of that with bike park or downhill setups. There are notable examples such as the Rocky Mountain Slayer. In a world of crossover athletes, short seat tubes and long dropper posts it makes a degree of sense for bike companies to be moving in this direction, and that's not to even mention potential cost savings. However, the purists may well be concerned about the lessening numbers of brands making full downhill bikes. 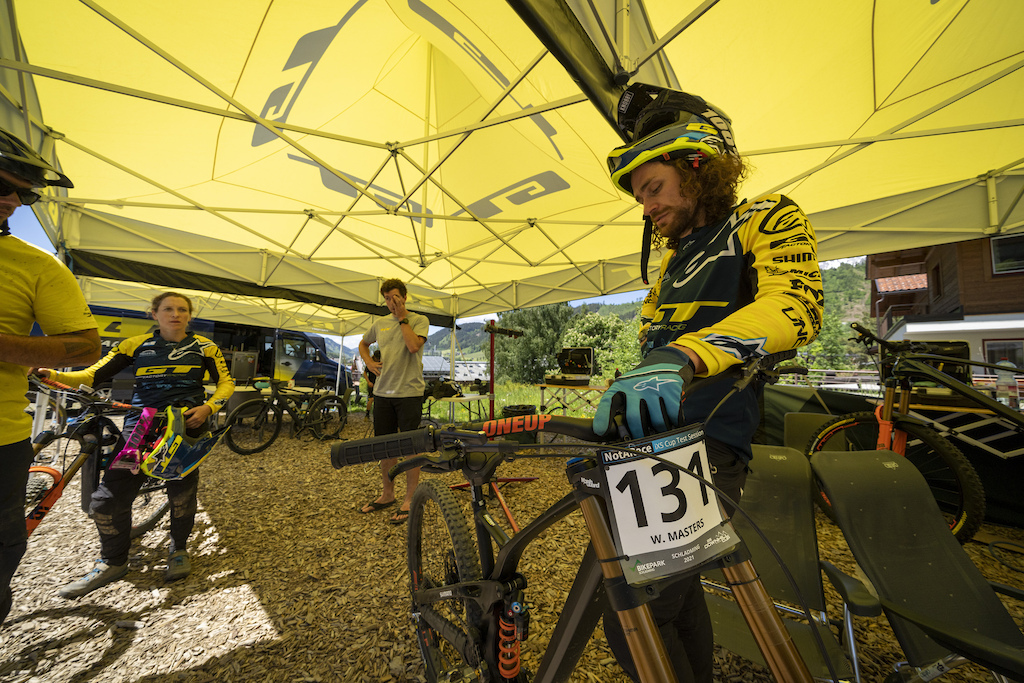 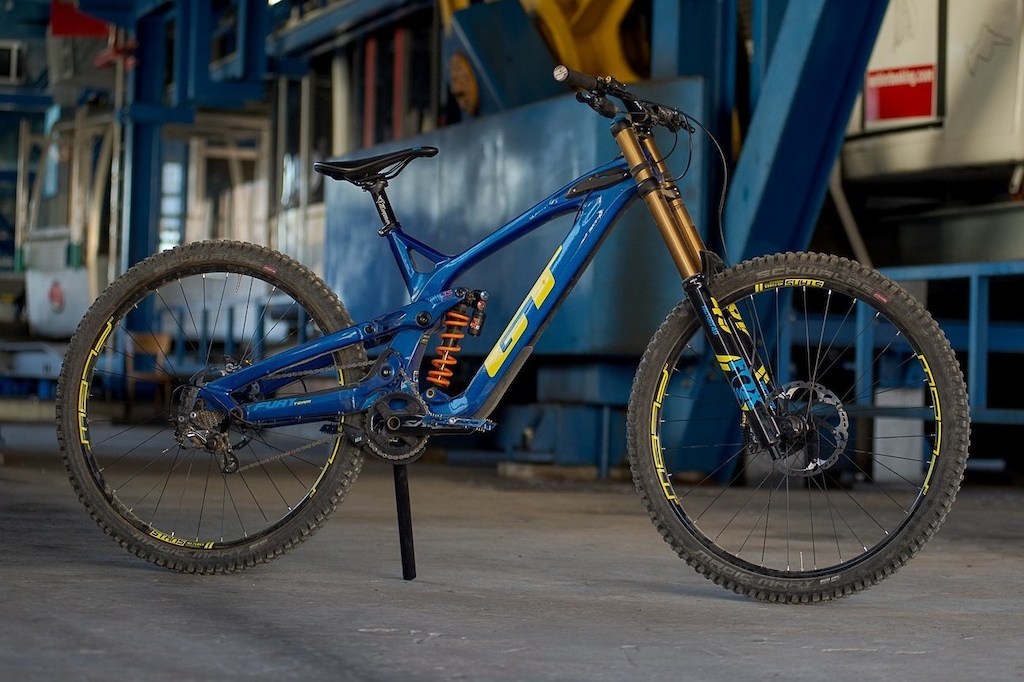 The current GT Fury.
Due to the addition of an idler, it's easy to distinguish it from any of GT's current enduro or trail offerings. When set up with a downhill fork at a passing glance is shares many similarities with the Fury. However, if you look at the profile and tubing of the frame it's easy to see that it's a different bike. You can see the most obvious differences around the top tube, as well as the seat tube junction and rocker. It also has a notably different rear end that also looks to include some form of length adjustment. 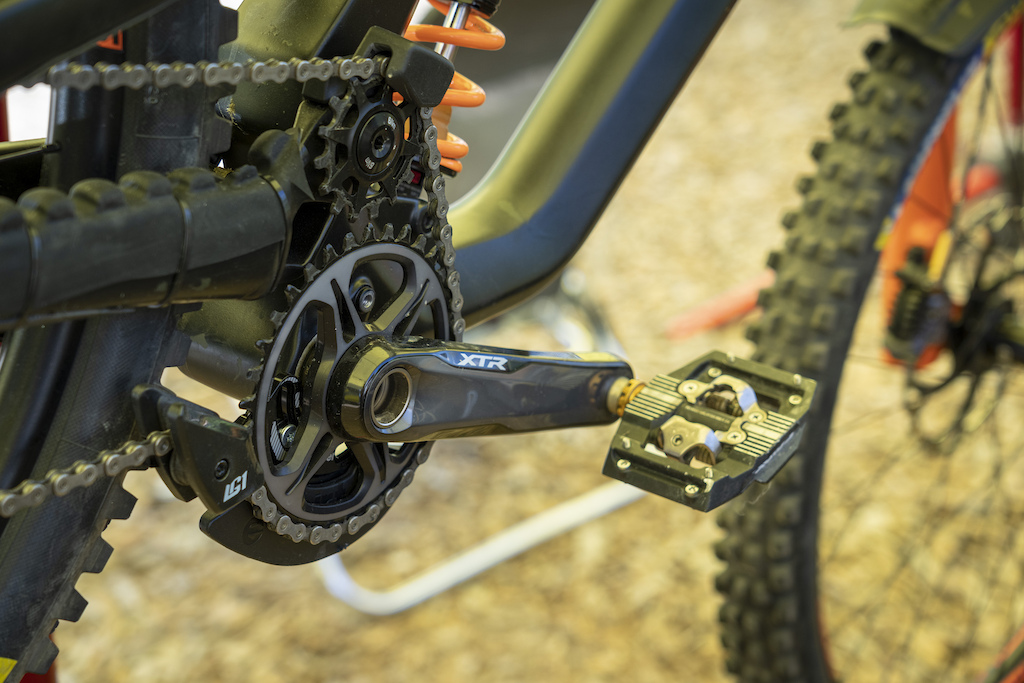 The idler is now completely external of the frame, as opposed to the Fury where it is housed within the swingarm. 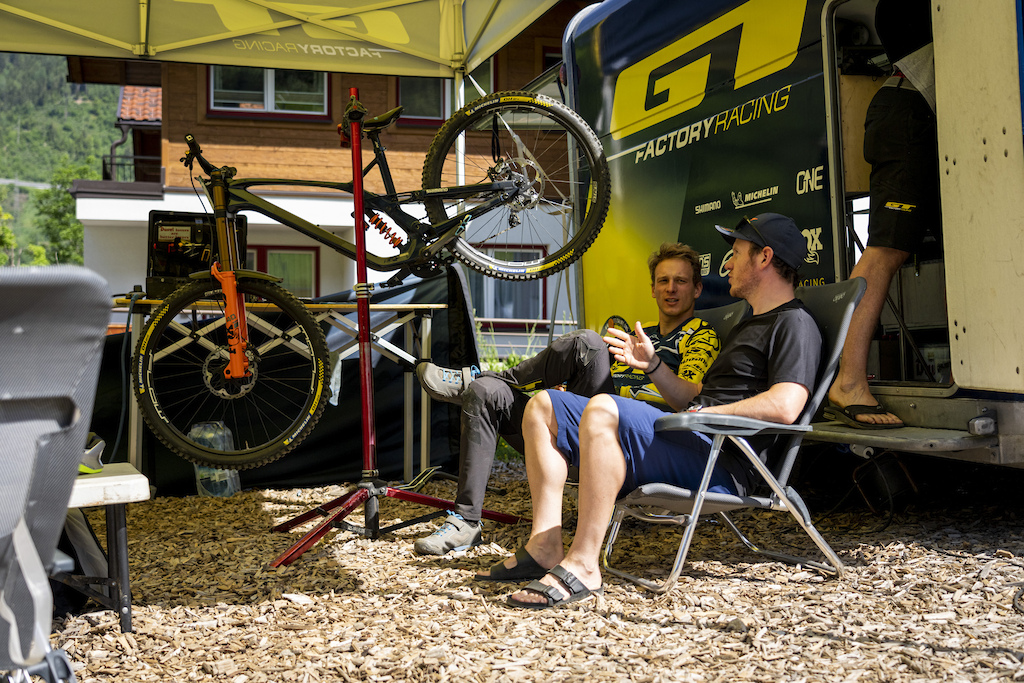 Wyn Masters looked to be running a full 29" setup. Noga Korem, who was seen lapping her Fox 36 equipped prototype before swapping on the current Fury partway through the day, could quite possibly be running a mixed wheel setup, a setup exploited by GT riders in the past. 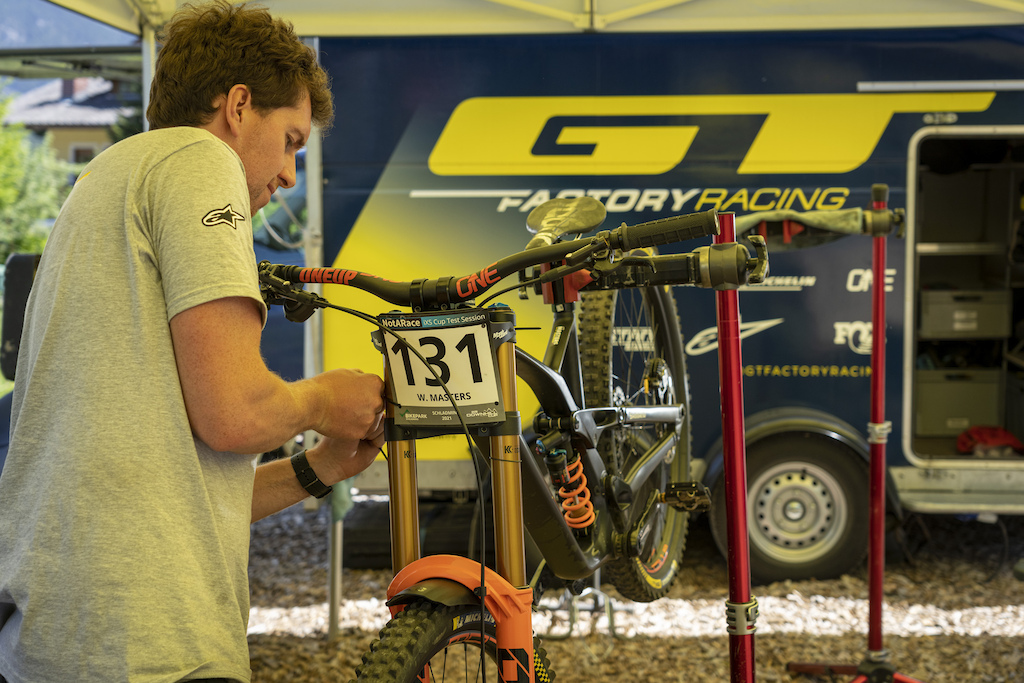 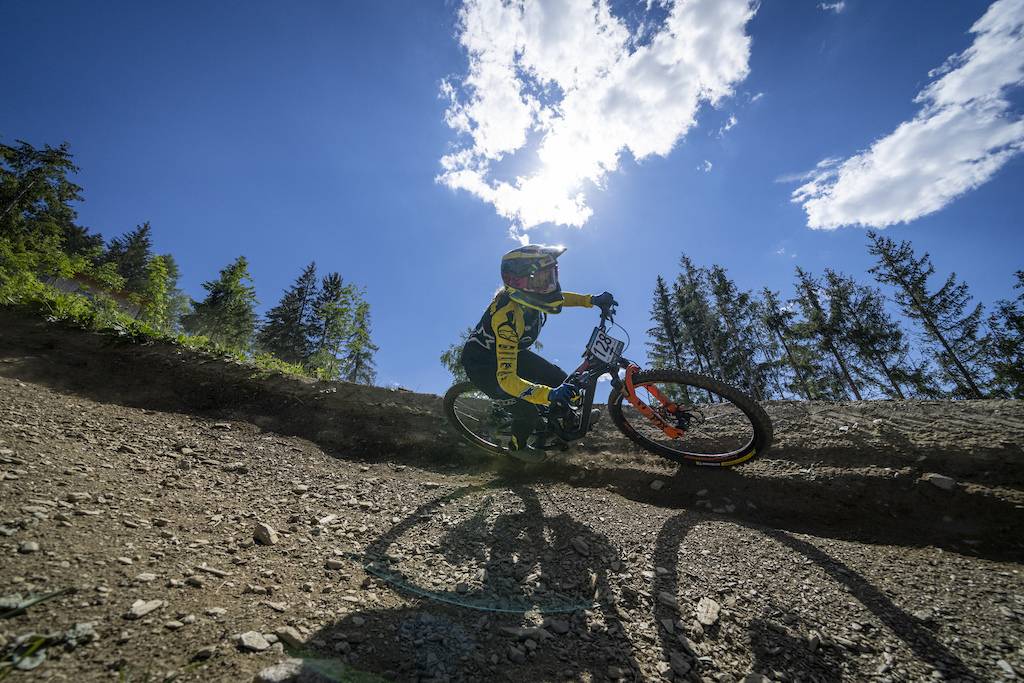 All Photos by Ben Hoffmann and Seb Gruber

Afterschoolsports (Jun 4, 2021 at 10:38)
This is awesome. I hope more manufacturers go down this path. I would own a DH bike if it could run an internal dropper, with an ok seat angle, and a bottle.

I hate your asshattery right now more than anything in the annals of mountain biking.
To a DH bike? You don't deserve the awesomeness that is a pure DH bike.

"Why can't my Supercross bike come with handles to portage it and a spare pair of racing slicks for Supermoto days?"

nickmalysh (Jun 4, 2021 at 11:53)
@blowmyfuse: just because WB require just two holes spaced few inch apart that are threaded and that's it, any frame can accommodate 2 holes either inside or outside of the front triangle

tgent (Jun 4, 2021 at 12:04)
Same! I'll never own a DH bike, but I'd strongly consider something with ~180mm of travel that could run dual crown and then swap enduro/dh setupds depending on what I'm riding.

Balgaroth (Jun 4, 2021 at 12:42)
@blowmyfuse: you realize that most enduro bikes are MX bikes modified to be woods appropriate and road legal ? Having the option to turn your DH bike into a pedalable version doesn't take away the performance when setup in full racing mode but allows those who need something more versatile to still have something rad.

topherdagopher (Jun 4, 2021 at 13:19)
It took me forever to figure out that WB is water bottle. Or in acronym speak itmftfotwbiswb

There’s water at the bottom of the hill dork.

Making space for water bottle in frame severely limits possible frame and linkage shapes. It is in some cases a huge thing to work around.

ReformedRoadie (Jun 4, 2021 at 13:36)
@nickmalysh: in a case of beautiful irony, blownmyfuse also has two holes

jlf1200 (Jun 4, 2021 at 13:37)
@getsomesy, yeah I agree. People asking for WB on their DH bike just don't want a DH bike. They want a bruiser bike they can ride park with. It sounds like splitting hairs but it's a totally different mindset and different sport. DH is 3-5 mins of maximum output and focus, the last thing I want is a bottle in the frame forcing a linkage compromise.

Then again almost nobody lives close enough to a lift for a DH bike to make sense. And that's the real reason we're talking about water bottles and dropper posts here.

Water bottle... Kinda? I have a small Fidlock bottle with the uni base strapped to the seat tube mast

gticket (Jun 4, 2021 at 22:45)
@jeffreylj: Me too, only bike i can think of offering the full 200mm of travel with a pedal platform. I demo’d a slayer and sure it could run a dual crown, but ultimately it’s not a DH bike and it’s way too heavy to double as an all day adventure bike. These 180mm travelish bikes come with too many compromises.

fartymarty (Jun 5, 2021 at 0:11)
I see a future where DH and enduro bikes have the same frames with different components hung off them.

artistformlyknowasdan (Jun 5, 2021 at 5:55)
@Poachninja: I finally got my built up a couple weeks ago. It is legit what I thought it’d be, a DH rig that doesn’t completely kill u on climbs, but has u wondering why you didn’t shuttle. That said great for grinding away on fire roads but not so pleasant grinding up steep tech singletrack. Not the bike to own if u can have only one BUT as second (third or fourth) bike if u have fire rds access to legit DH runs it’s fantastic. I have had several rides with 3k’ + of climbing on it now and you do get use to it

Afterschoolsports (Jun 5, 2021 at 7:10)
My trails don’t have water at top or bottom. I also have no shuttle service. My current long travel bike (canyon torque with dorado) doesn’t have bottle mount and it sucks having to ride with a pack. It’s way too hot in summer to be comfortable, so I don’t ride it as much when the weather is good. I would be happy to even have it under the DT. I’m not suggesting all DH frames go this way, but there are lots that could accomodate it with next to no penalty. Broadening the appeal of a niche bike would make it more likely to appear in a brands offering. How many companies no longer make a DH bike either theoretically or effectively? Loads! They’re the ones that are likely to bring something like this to market. It’s an emerging market trend. There just needs to be more of them and more that are designed for dual crowns as bikes like the super foxy, torque, Capra, giga, nomad are already most of the way there.

You could always just put a strap on water bottle cage on your bike; under downtube, over top tube, maybe even in frame.

I get hot quite easily, but don’t mind a sleek hydration pack riding downhill. If it’s hot enough to require water having 2-3 liters is better than a half liter. I also have pump, multi tool, maybe a tube, something to strap my full face knee pads and gloves to and most importantly a sort of back protector for tuck and rolls if Necessary.

A Single regular water bottle is a pretty minuscule amount of water, and according to some top level athletes you can do 1.5 Maybe 2 hr of exertion without a performance decrease without water, so why bother Uneccisarily strapping 2 lbs of water to a bike you paid $3k to have be 2lbs lighter.

I find water bottles ejected from bikes all the time trail side.

SterlingArcher (Jun 6, 2021 at 16:37)
@blowmyfuse: your annal love is a private matter. Not that there’s anything wrong with that

blowmyfuse (Jun 7, 2021 at 10:49)
@SterlingArcher: Ah yes, my personal stalker is back. Glad you have me as a hobby. Gonna comment on everything I post like my last stalker guy?

AZRyder (Jun 4, 2021 at 19:16)
I used to run a 2012 specialized status with a 180mm single crown 1.5” straight fork, rear air shock, with a 2x9 drivetrain and a dropper. That bike did everything and even got me to a couple super D podiums before enduro was even a thing. I’d trade that bike for any one of my current bikes. The guy I sold it to even messaged me months later saying how much he loved it. Salt in the wound.

Theysayivebeentheone (Jun 4, 2021 at 12:33)
Wow not only does it look great (it’s shocking to me because it’s a GT) this is actually a freaking game changer!!

kcy4130 (Jun 4, 2021 at 10:39)
I wonder if this is another bike that would have been released several months ago if it were't for component shortages?

vp27 (Jun 4, 2021 at 11:24)
Knolly does a similar thing. Their Warden and Chilcotin frames can be ran with different shock strokes and fork lengths. I am all for this. Buy a travel adjustable fork or a new air spring for your Rockshox/Fox and an extra rear shock. Presto, you have yourself and enduro and a DH/Freeride bike. Given how capable Enduro bikes are these days, I just find it very hard to justify a DH bike. I feel they’ll become the reserve for those living next to a bike park.

ReformedRoadie (Jun 5, 2021 at 7:16)
Pic of the current Fury - seat stays look they are angled wrong and would rotate rocker the wrong way and extend the shock.

robito (Jun 4, 2021 at 10:37)
Oh man did I want a GT performer when I was youngster. They're probably really good but their DH/enduro bikes would probably be one of the last bikes I would buy these days.

Thegnarberries (Jun 4, 2021 at 11:18)
looks like a session
Below threshold threads are hidden