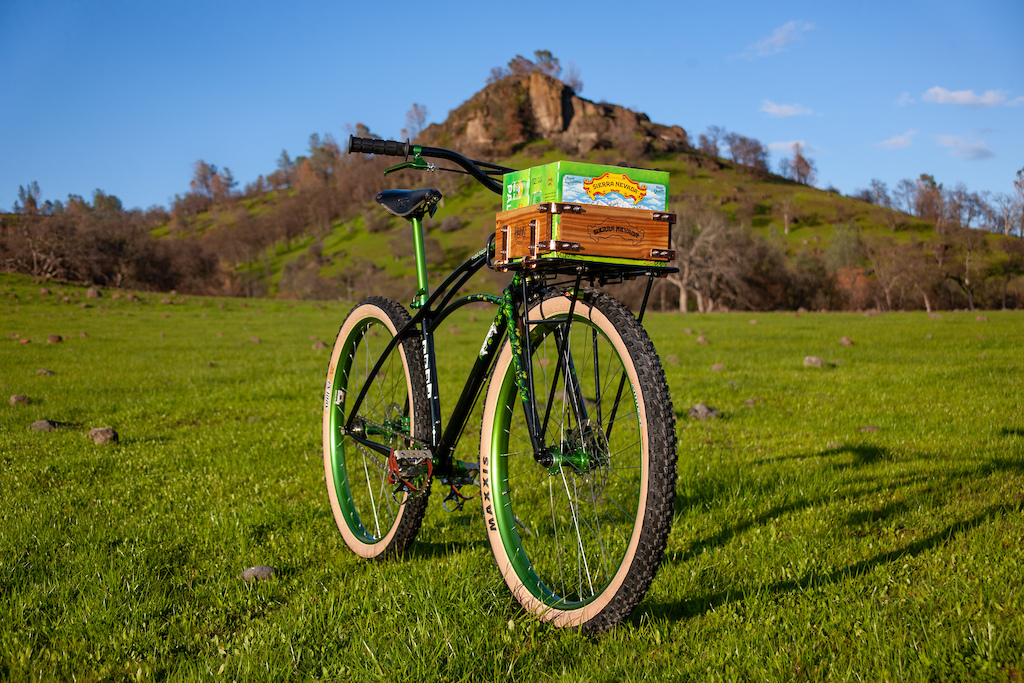 Last year Sierra Nevada Brewery asked us to build them a sweet custom bike to show off at their beer garden at the Sea Otter Classic. Them being our favorite brewery of all time (and where Paul himself gets lunch EVERY day), we jumped at the chance and created the “Sierra Shredder”. It was a hit! 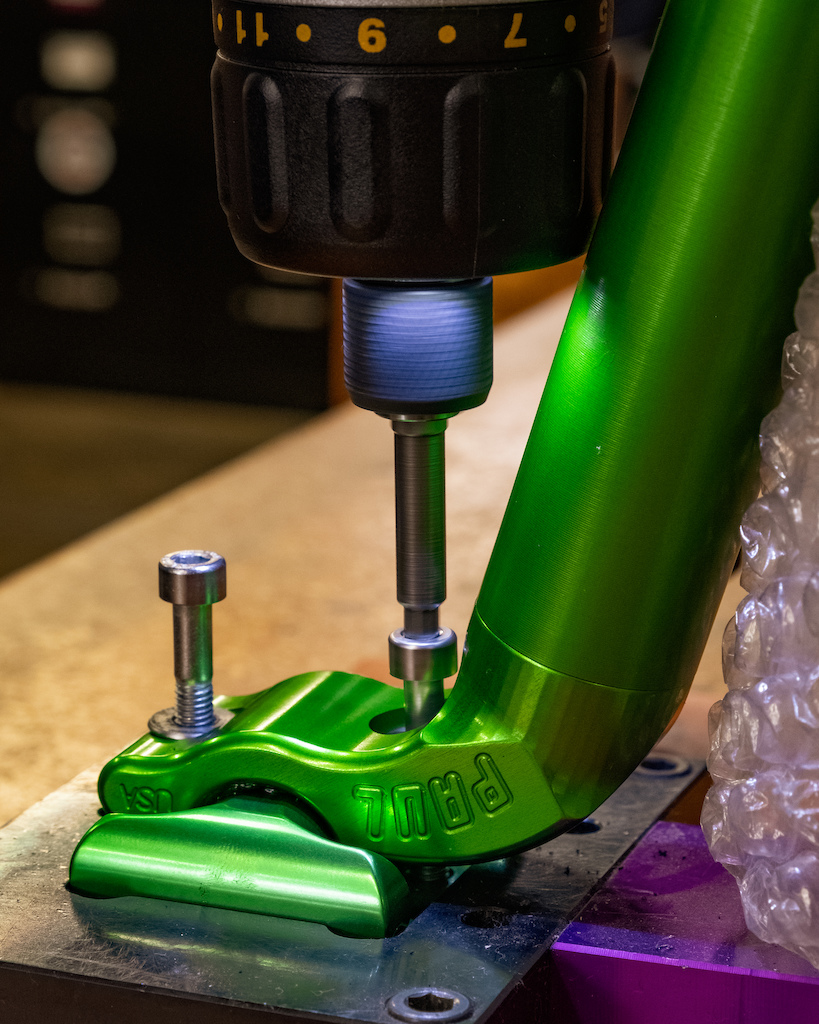 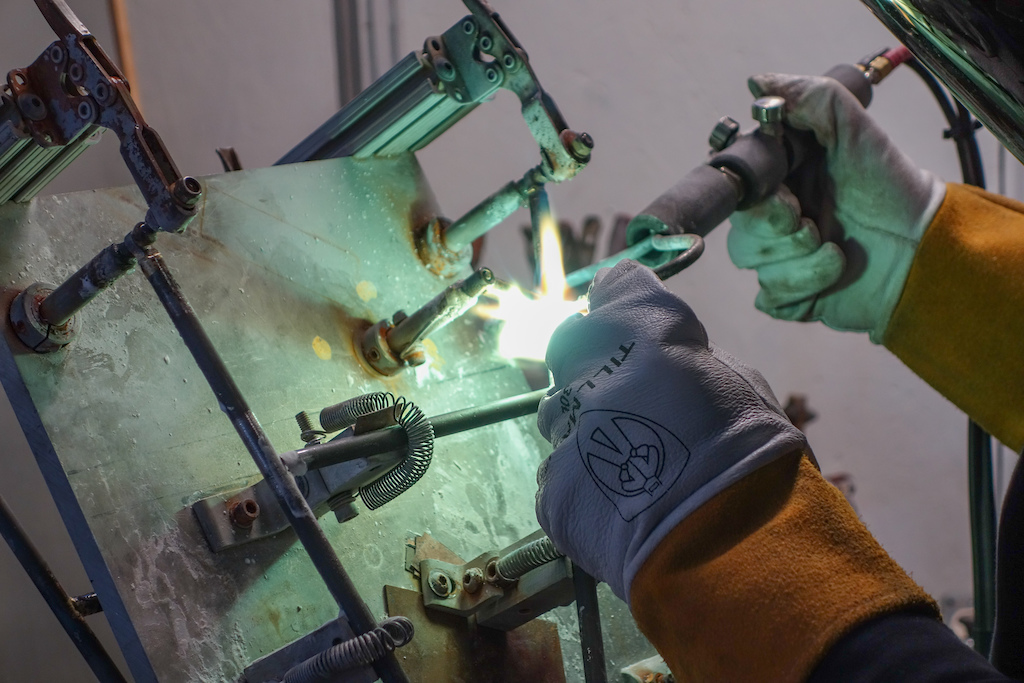 “The Sierra Klunker is a bike that pays homage to the simple, fun, and rowdy birth of Mountain Biking while honoring its roots in Northern California” 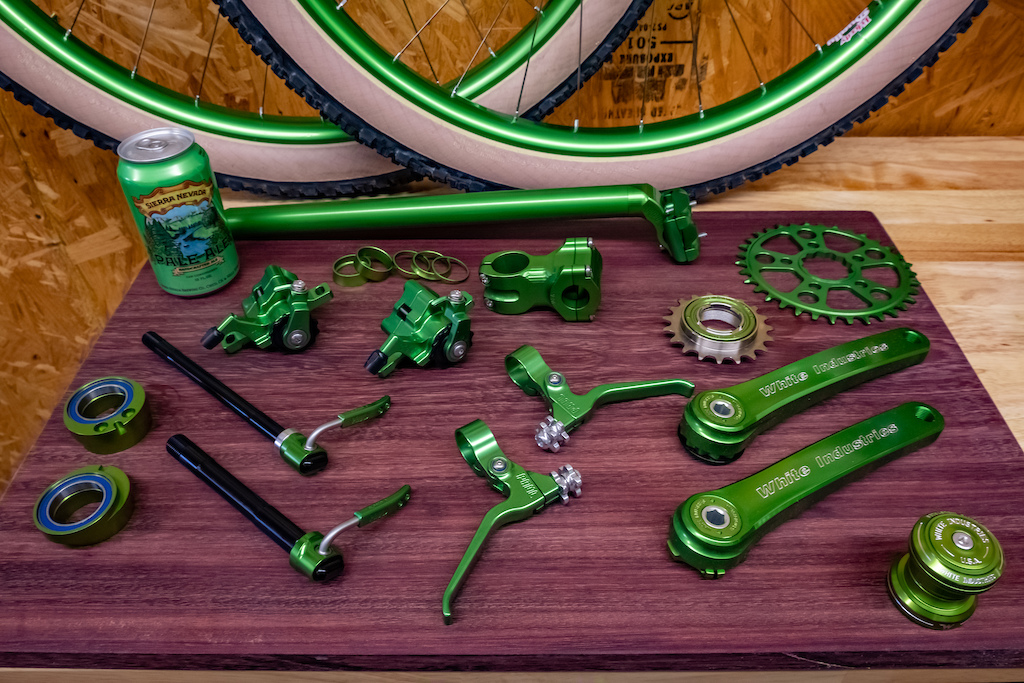 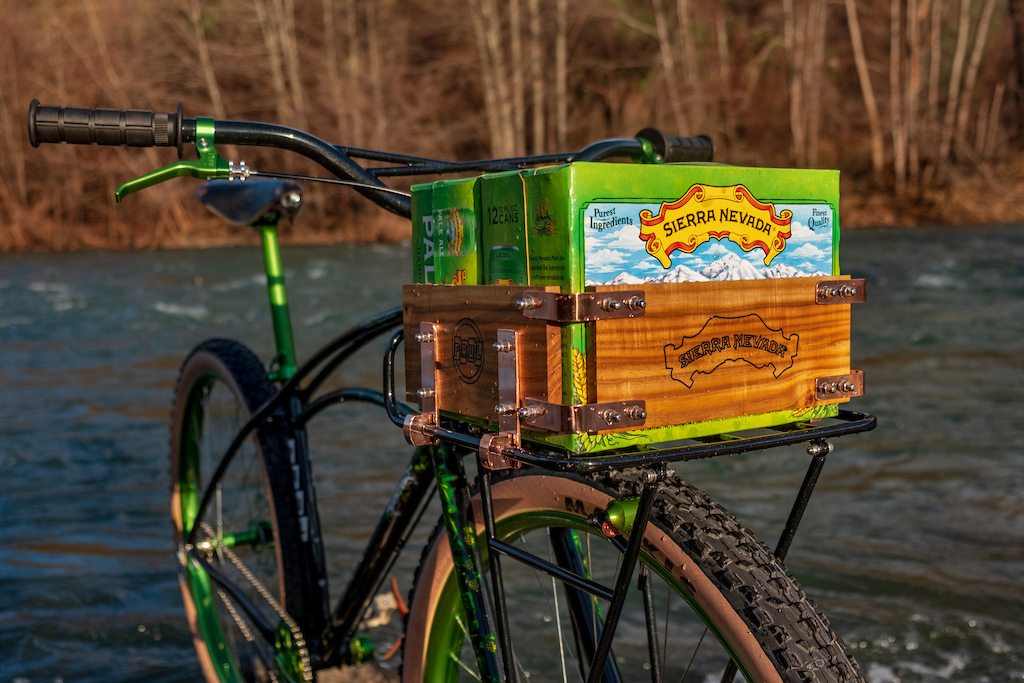 When they asked us to build them a bike again this year, we thought long and hard about it for a while, then went deep. It’s a little known fact that Chico’s own Bidwell Park (our backyard and product testing grounds) was host to the first mountain bike race in America, predating the first Repack race in Marin by two months. Chico was also host to early mountain bike frame building pioneers Mountain Goat and Retrotec. 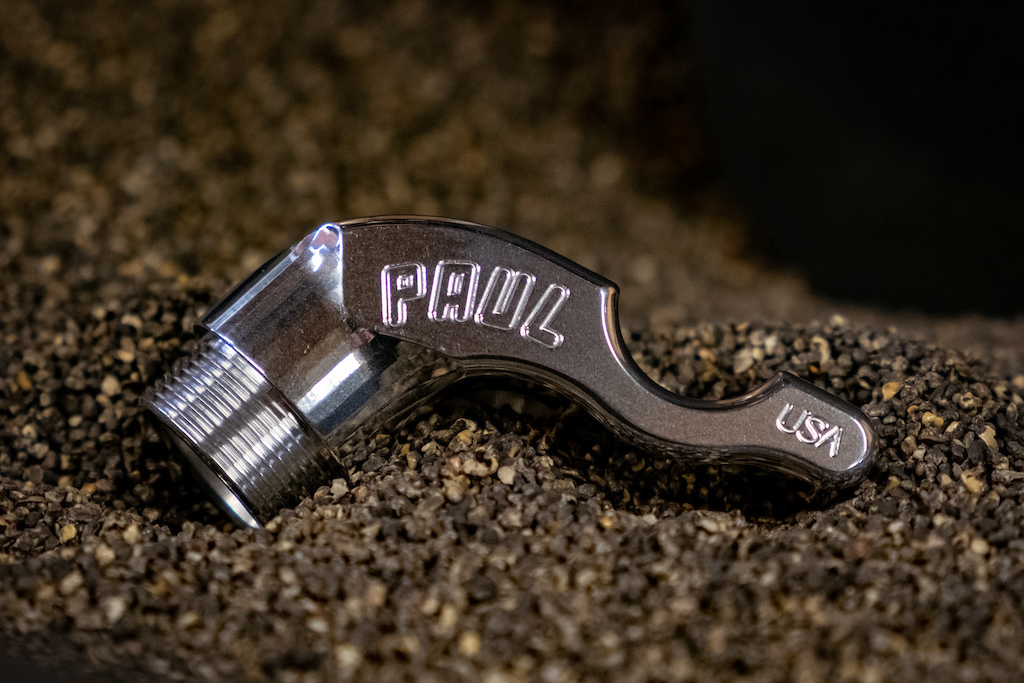 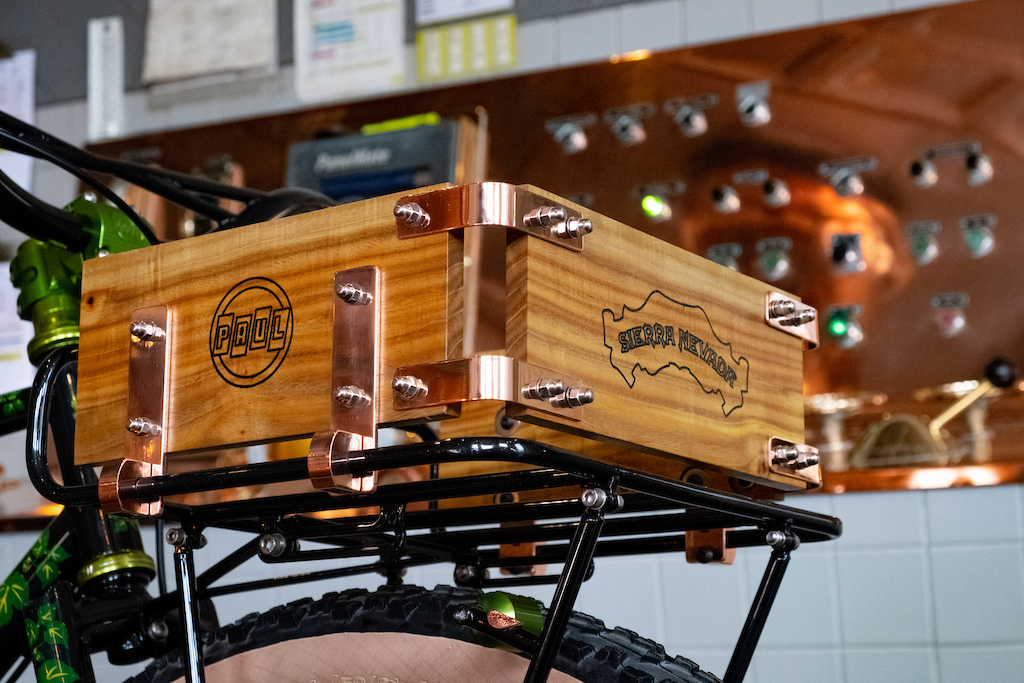 So, we drew inspiration from everything we loved about old school Klunker mountain bikes and created a tribute to the bikes that started it all, using as many of our own modern parts and other American manufacturers as possible. Curtis Inglis cut his teeth here in Chico at Retrotec Cycles, and his swoopy elegant frames are a perfect fit for the classic Klunker aesthetic we were looking for, so he built us a beautiful and shred-worthy frame and fork. Oddity made us an extra-wide-very-moto custom handlebar from scratch. Pass and Stow in Oakland sent us the latest version of their front rack to use as a base for Paul’s one-off beer rack, which he made from copper (to match the prominent copper kettles at the Sierra Nevada Brewery) and Chinese Pistachio wood (a tree found all over Chico neighborhoods). White Industries in Petaluma supplied the single speed freewheel, cranks, and headset. Oner supplied an eccentric bottom bracket, and Velocity USA in Michigan made the rims. 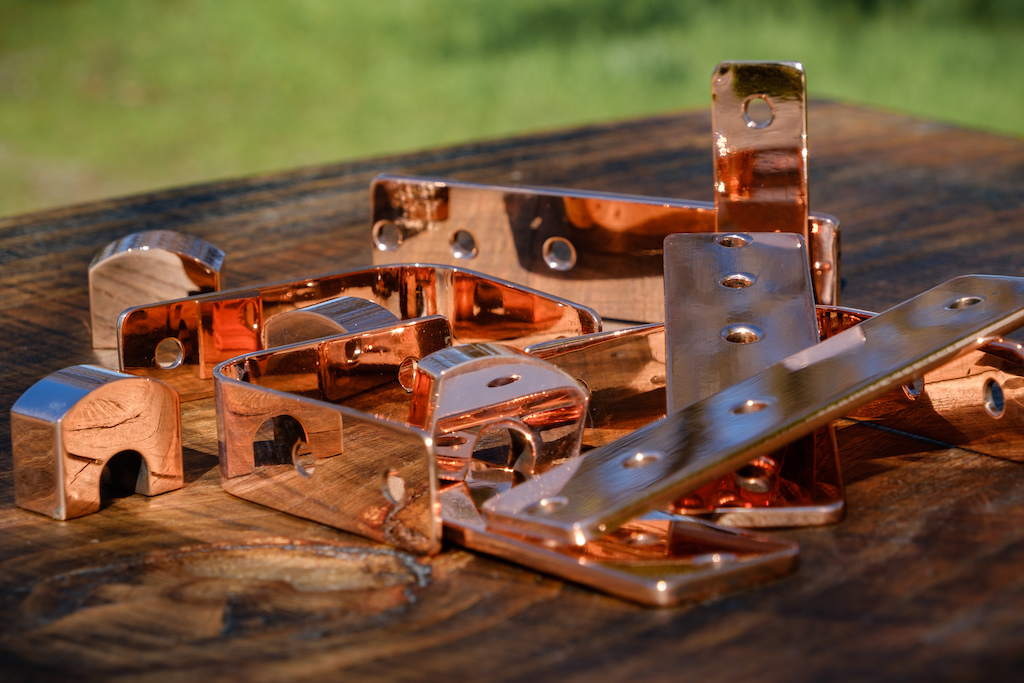 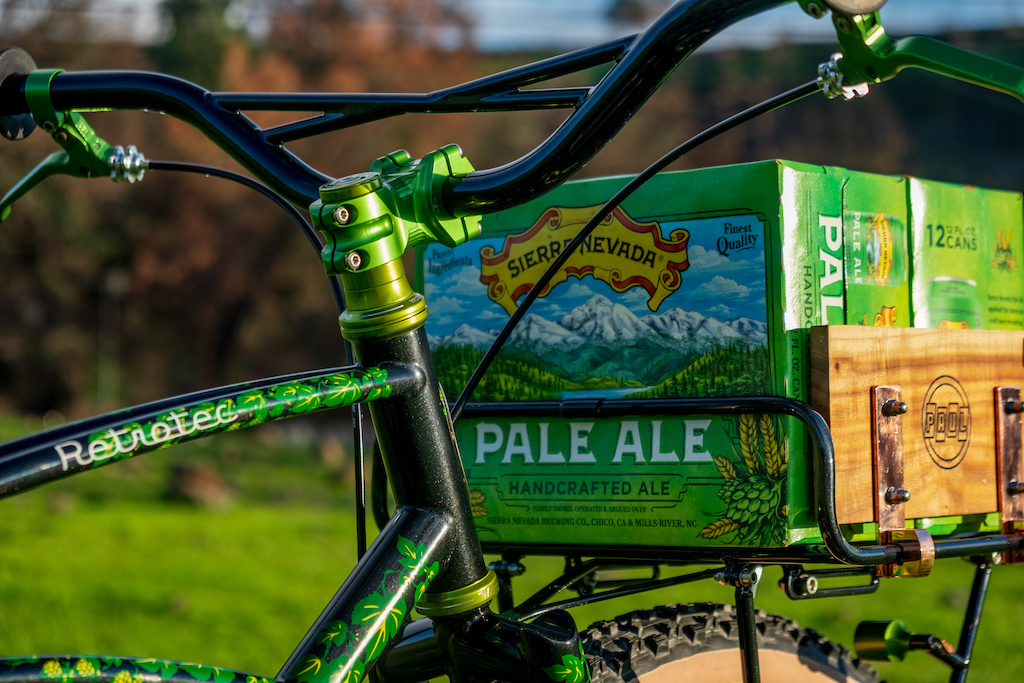 We sent all the aluminum parts to the anodizer together and had them color-match everything to a six-pack of Pale Ale beer. Rounding out the American made parts are Oury Grips and Wheelsmith spokes. The rigid frame and fork coupled with one-speed gearing means it’s a rough ride like the good old days, but at least the modern disc brakes stop better than the old coaster brakes did. 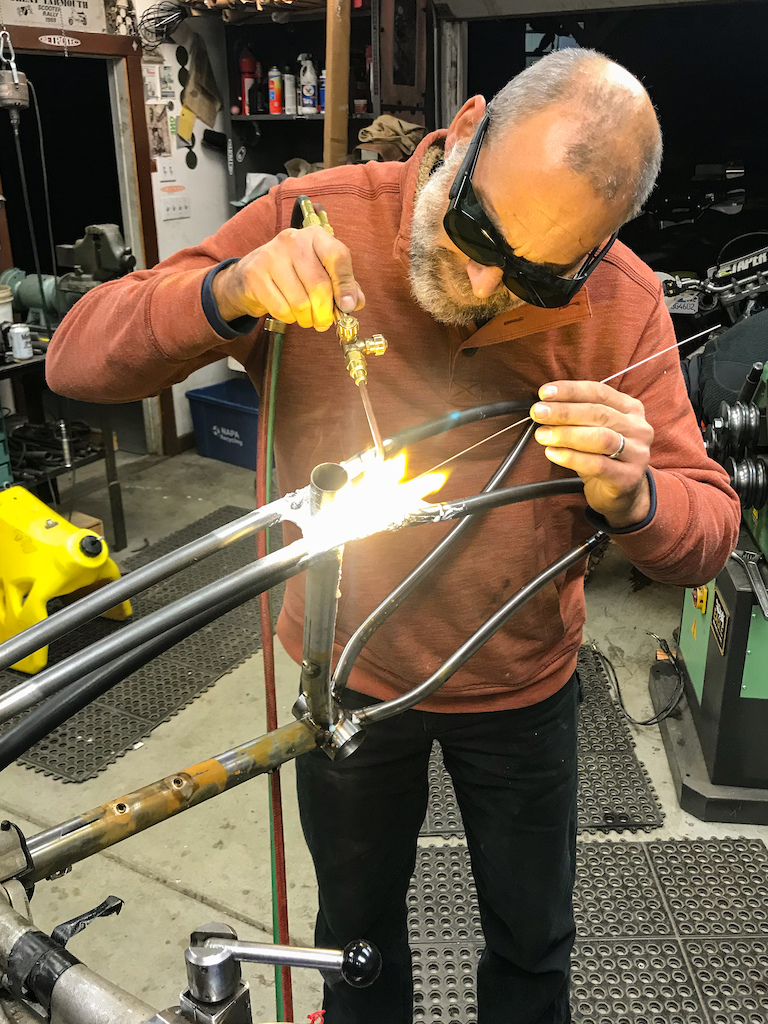 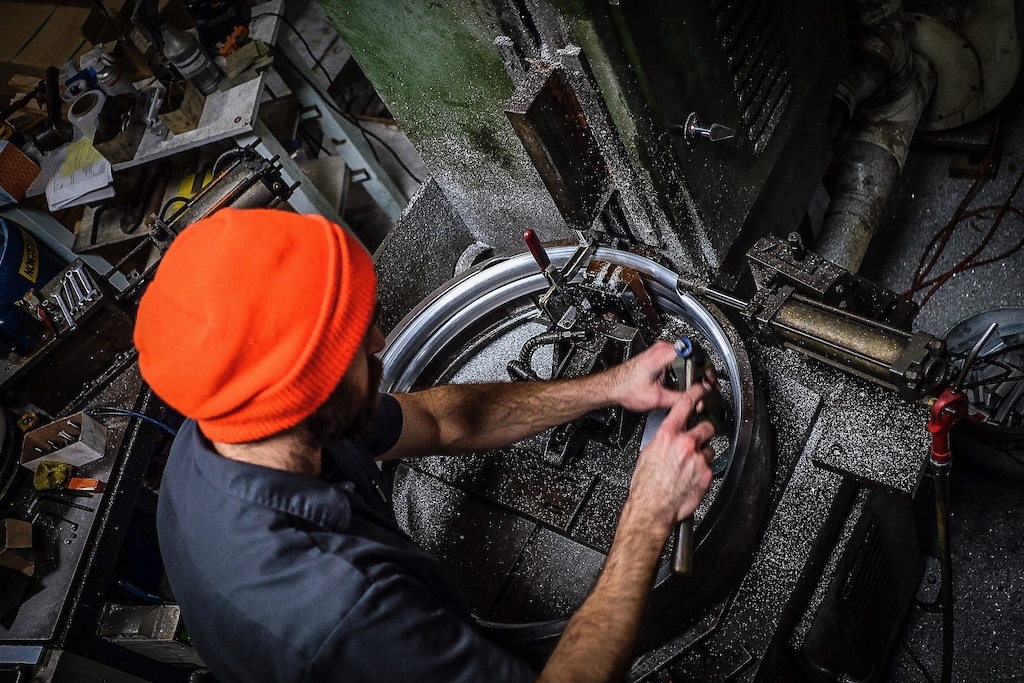 We'll be showing it off at the North American Handmade Bicycle Show, taking it to the party at the Sierra Nevada Beer Garden at the Sea Otter Classic, and letting Ken Grossman himself take it for a ride in Bidwell Park. 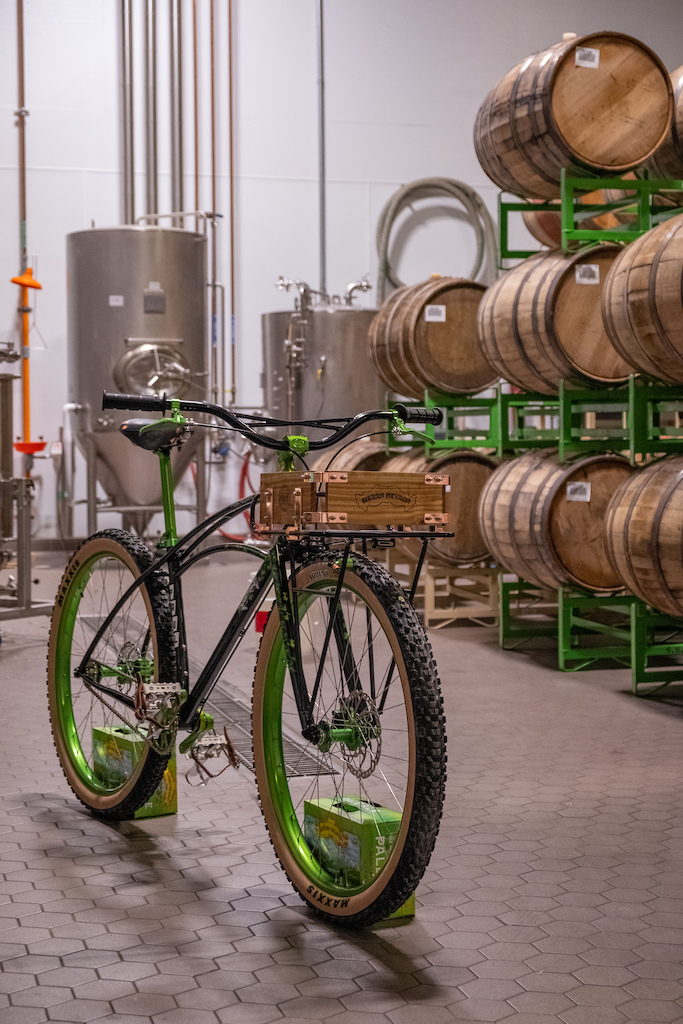 Check out the full gallery here.

GlassGuy (Mar 13, 2019 at 6:17)
I scrolled down excited to see more angles....none. Disappointed at no side angle My exact thought. I love color matching my bikes, I've built and painted a bunch too..... and the green in this is fantastic...I may have to swap the red on my new Scout to green!

I'm holding out for the Torpedo variant.

PaulComponentEngineering (Mar 13, 2019 at 9:10)
Check the gallery link at the bottom of the article. Adding a ton of photos right now. It'll be like you're HERE. Ok, maybe TOO many photos now haha......

PaulComponentEngineering (Mar 13, 2019 at 9:22)
@GlassGuy: Just added maybe way too many more photos to the gallery link at the bottom of the article, cheers

Almazing (Mar 13, 2019 at 4:20)
I feel like I'd need to grow a handlebar moustache, wear a beanie, skinny jeans, Wayfarers, and flanel all the time as a prerequisite to ride this thing.

reverend27 (Mar 13, 2019 at 9:16) (Below Threshold)
Beanies and wayfarers are hipster now?
Are my favorite pair of broken in luckies hipster too?

I feel like any fashion aware guy who doesn't look like he crawled out of the dumpster behind Bass pro shop falls under this term now.

I say bust your ass get in shape wear clothes that accentuate your body and then you'll know how amazing it feels to have beautiful women stare at you like a piece of meat.

WAKIdesigns (Mar 13, 2019 at 9:23)
@reverend27: I must say your last sentence... yes... but at the same time, if you take a DJ instead, make sure she notices that you checking her out in return, and pull a few simple tricks. Then do a handstand or flag on a light post, front lever from a railing. The only good motivation to get into caliesthenics: becoming meat. yes. Oh yes. And the men around will be so quiet...

reverend27 (Mar 13, 2019 at 9:36)
@WAKIdesigns: quiet with hateful looks on their faces..
And I don't have to do monkey tricks they are already so taken I feel sorry for them..shooting down 19 year old cheerleaders who say they pay for everything is terribly painful for me.

reverend27 (Mar 13, 2019 at 9:46)
@WAKIdesigns: but I must warn when I take my shirt off at the pool to get some sun and look up to see more then 10 women all staring and flipping their hair at me it kind of spooky.

Like a bunch of lioness waiting to see which one of them the lion wants to ****.

WAKIdesigns (Mar 13, 2019 at 10:04)
@reverend27: I am not as consistent with my results... but I like acrobatic tricks. It kind of gives credibility to the muscles and the bike itself, that they are not just for looks

There's enough beatifully sculpted boys out there who can't do sht, and males can identify a breeder rather quickly.

nmhaigarack (Mar 13, 2019 at 5:18)
It’s so good to see all these USA-made brands featured on PB! The handbuilt scene is strong in Northern California. I can’t wait to check this thing out in person at NAHBS!

pinnityafairy (Mar 13, 2019 at 6:07)
I have always known that when I have more money than I know what to do with I will buy Paul components

Endurahbrah (Mar 13, 2019 at 6:42)
Serious question. Has anyone ever used Paul brakes for a trail bike? I'm so sick of dealing with hydro brakes I would love to try them but they're pricey.

have fun with your bb7's.

Endurahbrah (Mar 13, 2019 at 8:51)
@connorjuliusjohnson: That's why I'm asking about Paul brakes. Is there a huge difference between them and BB7's?.

connorjuliusjohnson (Mar 13, 2019 at 8:54)
@Endurahbrah: I was just being a dick, yeah. Sorry. Don't have an answer on Paul brakes. SLX brakes are cheap and use mineral oil.

VTTyeahyouknowme (Mar 13, 2019 at 10:19)
Direct experience- they're significantly worse than hydraulic brakes. Power, modulation, consistency- all decidedly worse than almost any hydraulic brake. Get some cheap mineral oil brakes (SLX is great,) bleed it really well once and be done with it.

zeberoni (Mar 13, 2019 at 11:24)
Theyre not as good as hydro brakes, but they are MUCH better than every other cable disc brake on the market IMO.

Now where is my Shimano funnel? Lol

krashDH85 (Mar 13, 2019 at 7:37)
Love the bike, the fabrication, the machined bits, and the colors. Although that pale ale is complete shitte IMO. Tried to like it, never could.

chrisclifford (Mar 13, 2019 at 13:55)
If you think SNPA is bad then you just don't like Pale Ales. It's one of the best examples of the style. Also a huge reason for the craft beer boom of the past 20 years

Insane-Saint (Mar 13, 2019 at 9:01)
Nice one but why there is no Suspension for the beer, so you can open it immediately after riding? it shakes to mutch like that :O

Franzzz (Mar 13, 2019 at 12:15)
Not bad, but as a french piece of man, I`d rather ride a good Bourgogne bike and occasionnaly a Champagne bike because beer makes me fart and burp. That would be nicer for my fellow riders

tevans473 (Mar 14, 2019 at 10:22)
Awesome paint/powder work by Darkmatter Finishing. I share a shop with him and got to see it in progress. Super cool to see it all buttoned up.

hubertje-ryu (Mar 13, 2019 at 5:08)
Forgot the headset when they sent everything for anodising, I guess. Lovely bike though.

aljoburr Plus (Mar 13, 2019 at 6:36)
I am sure is a bottle opener somewhere on that bike, but dont drink and ride?
Nice bike as long as no hills far less mountains?

Poulsbojohnny (Mar 13, 2019 at 9:10)
@rmalexan: That thing is a bike festival king. Load it up, ride around and pass out beers. Bottle opener should be under the seat. haha!

Love the green, Hope does it as well, so #bikeporn

patrickbatemanworldtour89 (Mar 13, 2019 at 8:11)
@celticdavey: Let's give him the benefit of the doubt and assume he thought of that, and that he bought at least a full case.