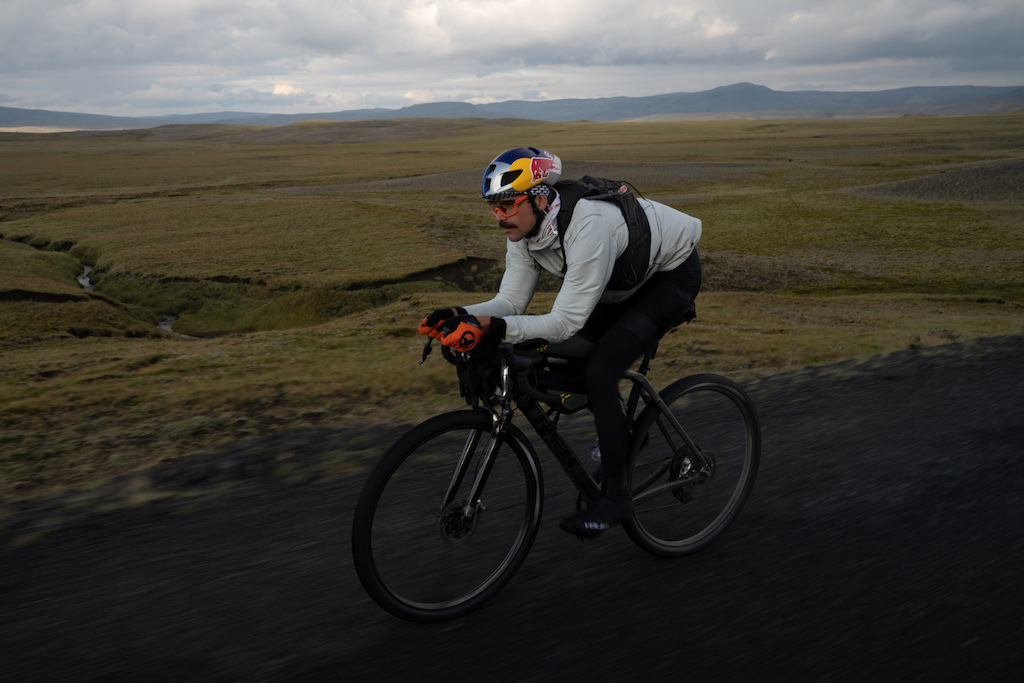 On Saturday, September 11th, at 11:59 PM, endurance cyclist and Red Bull athlete Payson McElveen completed the first human-powered bike excursion across Iceland in under 24 hours. Beginning at 4:15 AM from the Akureyrarkirkja church in Akureyri, a city on Iceland’s northern coast, and ending at the turbulent ocean wash of Iceland’s southernmost coastal town, Vík, the 19 hours and 45 minutes ride traversed 257 miles of Iceland’s remote backcountry doubletrack roads in what McElveen described as the “ride of a lifetime.”

“As an endurance athlete and adventure-seeker, I am constantly chasing experiences that challenge my ability,” said McElveen. “But to push myself through such challenging weather conditions and over 12,000 feet in elevation gains against such a beautiful, glacial countryside, I have a renewed sense of awe for the country of Iceland.

The challenge, which McElveen dreamed up with the help of adventure athlete and photographer companion Chris Burkard, was less about the record attempt than it was focused on the personal challenge and opportunity to become intimate with the country: “The competitor in me will always enjoy racing to throw down a fast time, but this project was less about an FKT effort and more about just seeing if it was possible to ride across the whole country in less than a day. Ever since the success of the White Rim FKT in 2019, I’ve been thinking about other geographically focused routes to do a big effort on. To me, those are the challenges that inspire me most these days. Start at one landmark and ride as fast as you can until you literally run out of road or trail… in this case that was hitting the ocean on the southside of the country.”

McElveen’s route utilized the “F” roads of the The Highlands, which are rugged, minimally maintained doubletrack suitable only for high clearance overland vehicles. After descending from the plateau, McElveen’s route utilized Route 1 or the “Ring Road” for the final 57 miles to Vík. About 139 miles of the route was unpaved. With no refuel points along the route, McElveen started with over 7,000 calories of food to fuel the journey.

To Chris Burkard, the feat inspired him for historical reasons: “More than just an athletic achievement, Payson’s ride pays homage to thousands of years of overland travel through this wild country and in many ways is impossible to truly describe to anyone who hasn’t sank their tires deep into it’s remote and endless gravel roads. Having personally ridden through it, around and across it, slogging thousands of miles of Icelandic gravel – I know a thing or two about Iceland’s terrain by bike, and this achievement can only be compared to a near mythical achievement. Fitting for Iceland to say the least.”

Originally scheduled for the week of September 13th, McElveen moved the departure date up to beat storms forecasted to impact much of The Highlands. This meant only two days of rest following an eight day, 680 tour of the Westfjords he’d just completed earlier in the week. Even so, he faced a light headwind much of the day, over seven hours of rain, and temperatures as low as 31ºF. Along with the rough terrain, he said the weather was the biggest challenge.

“It’s funny how our ‘weather window’ would qualify as the worst riding weather you’d probably have all year elsewhere,” McElveen remarked. “Iceland’s weather is some of the most dynamic in the world, especially in September. I knew we were pushing it a bit in terms of the time of year, but I really wanted to try to complete this ride before we left. I chose my gear carefully, which was crucial in completing the ride.”

Payson said he’d love to see others attempt the coast-to-coast route at record attempt speed, but wants to make sure other participants understand the potential dangers of the route: “The interior of Iceland is an extremely harsh place. When I got up there and saw it for the first time, it felt completely otherworldly – like I was visiting an alien planet. It doesn’t really feel like you’re supposed to be up there. I had the distinct sense that I wanted to get through it and back down to safety as fast as I could. For others interested, I would strongly recommend riding in the warmer, dryer months of the summer, and take more clothing and food than you think you need. Iceland is the most beautiful country I have ever been, but with volcanoes, glaciers, desert, and weather that will make you feel extremely small and vulnerable. After this ride, I have a full appreciation for giving this wild country the respect and admiration it deserves.”

A forthcoming film will tell the story of McElveen’s ride. Stay tuned for release details. 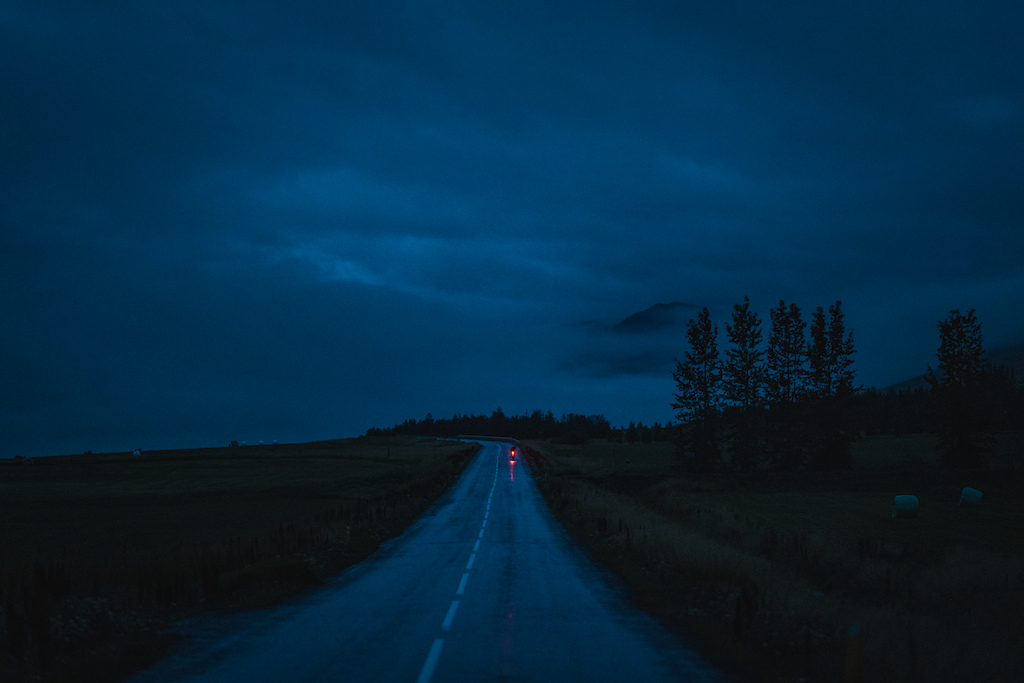 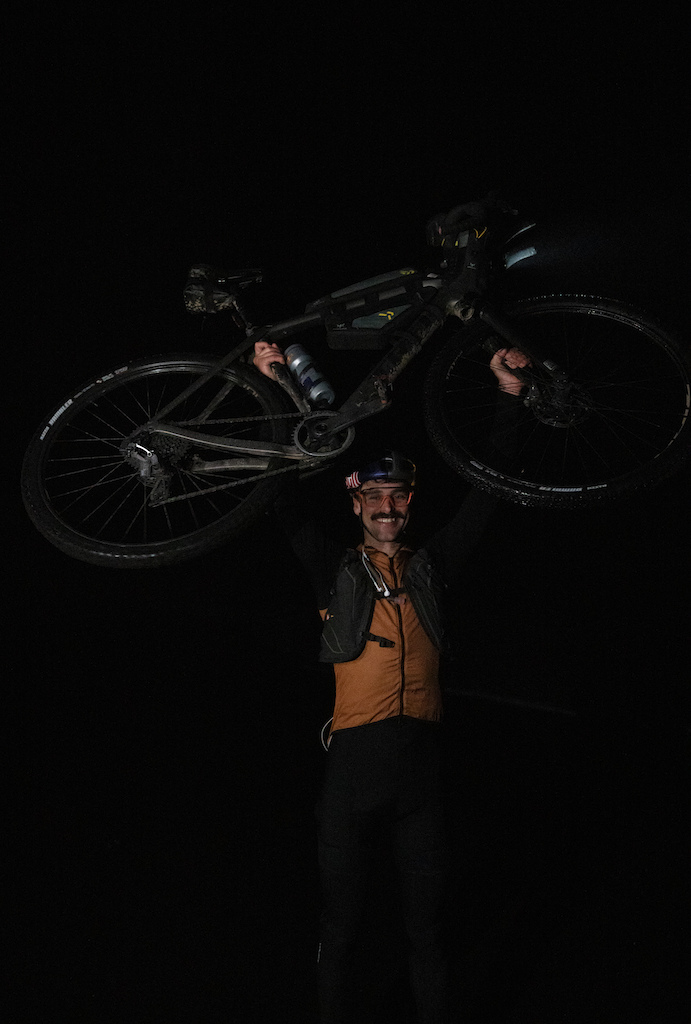 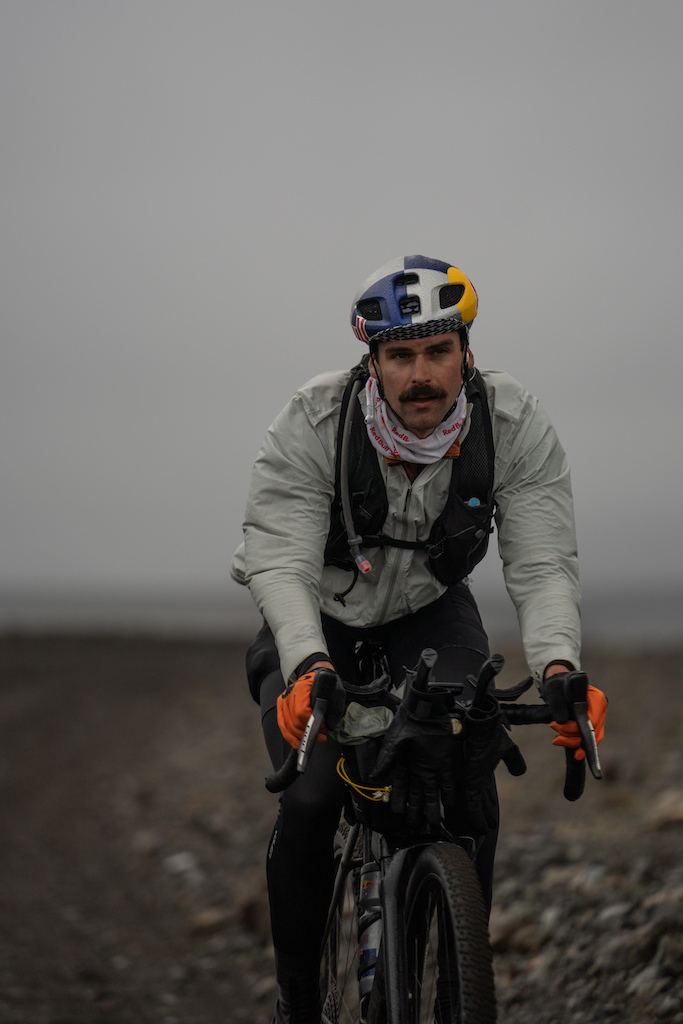 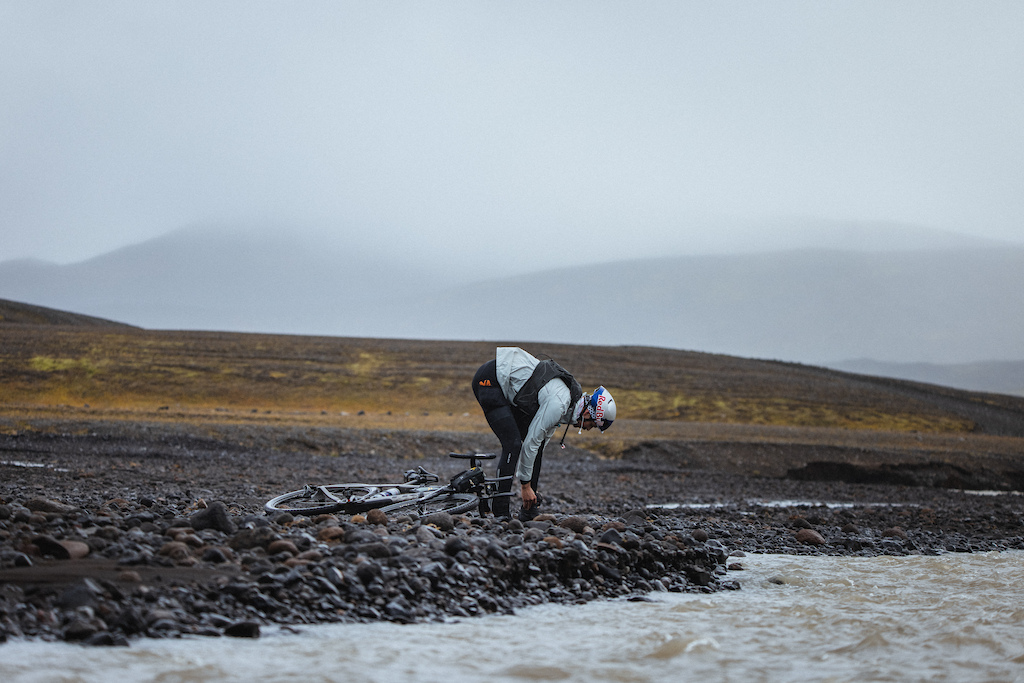 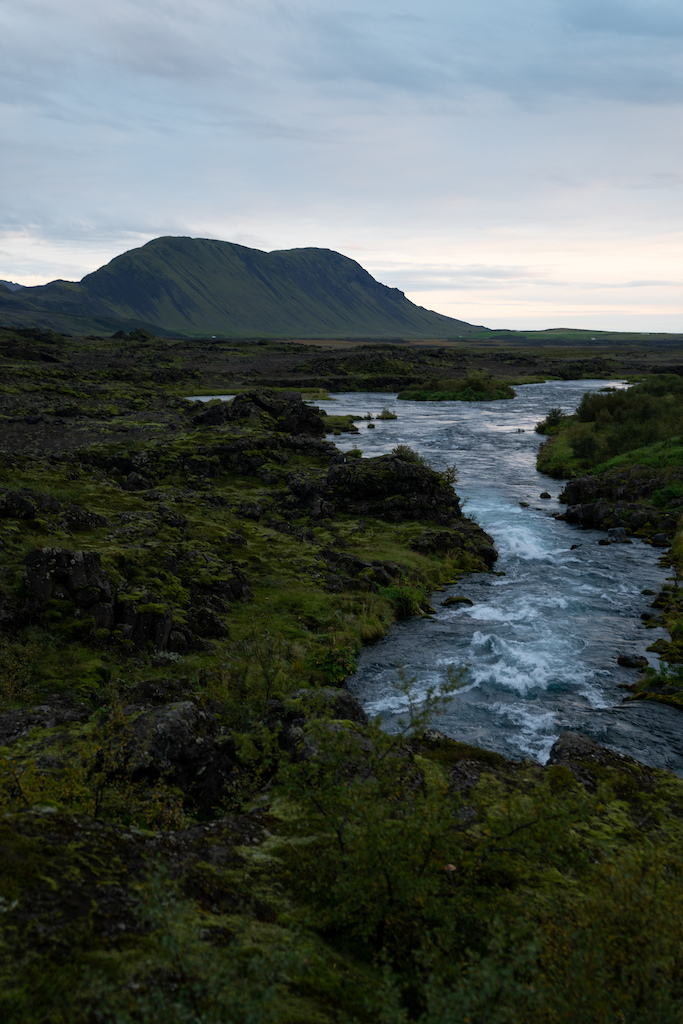 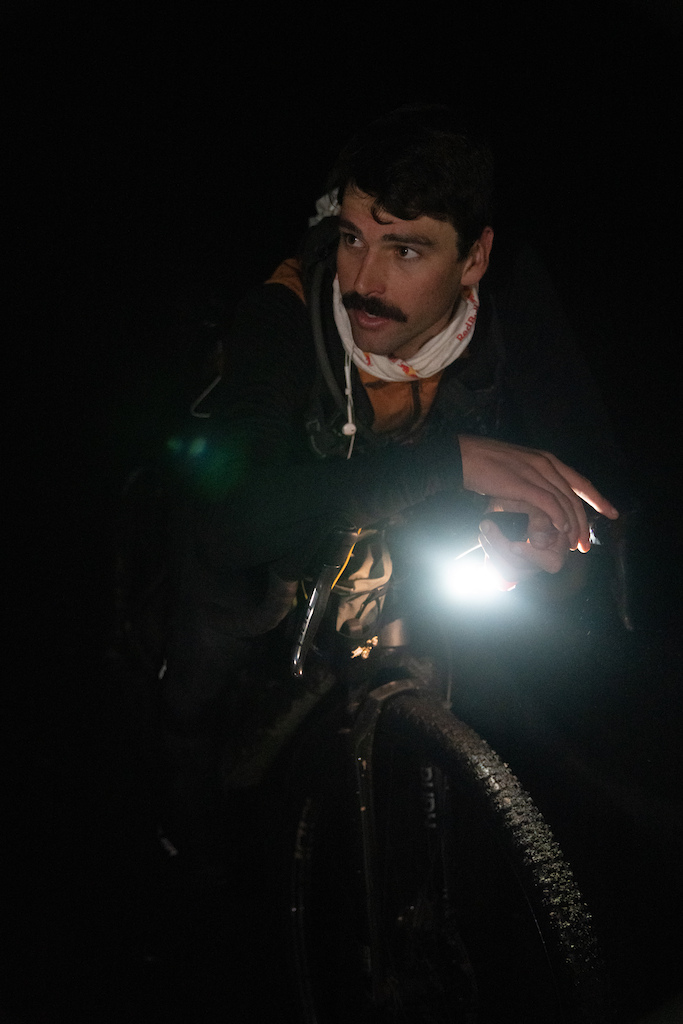 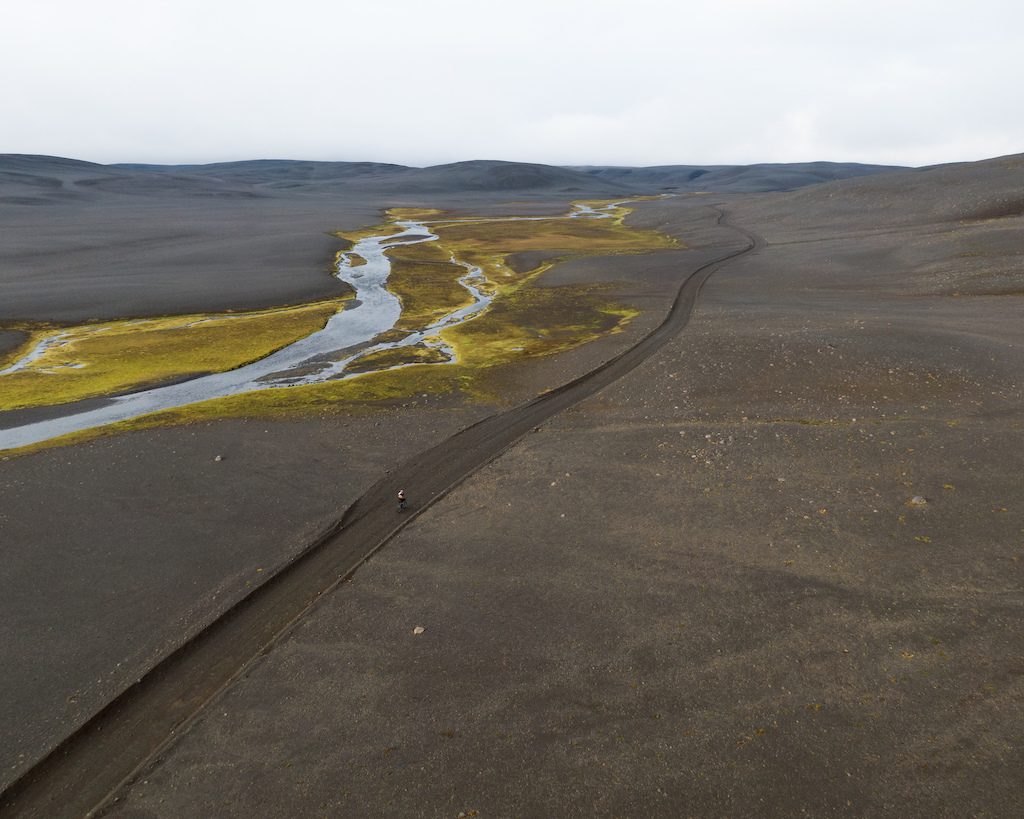 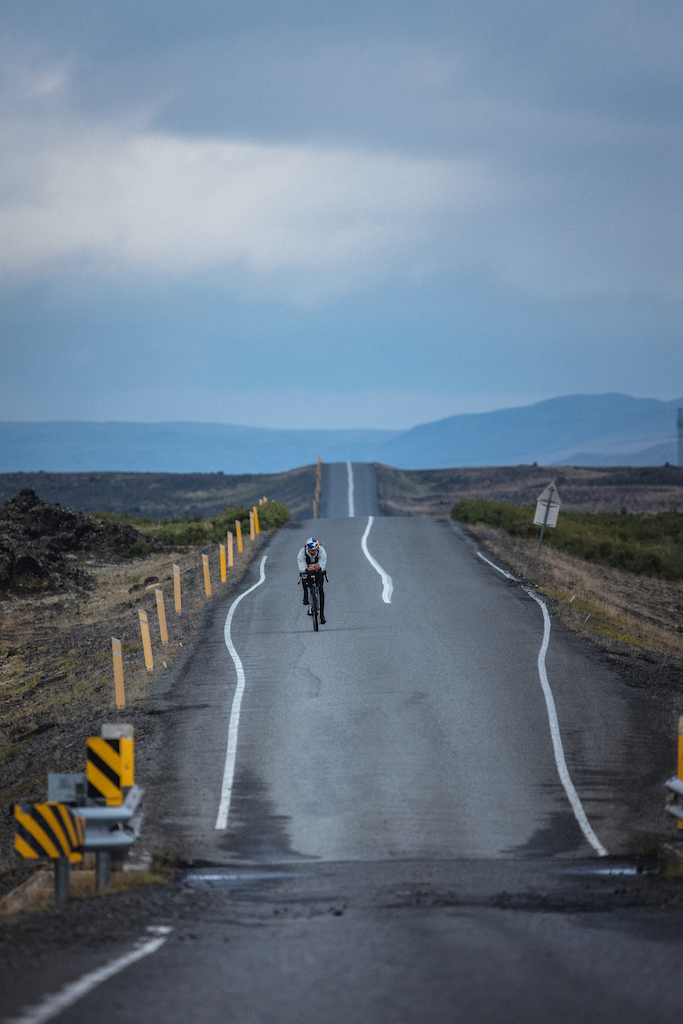 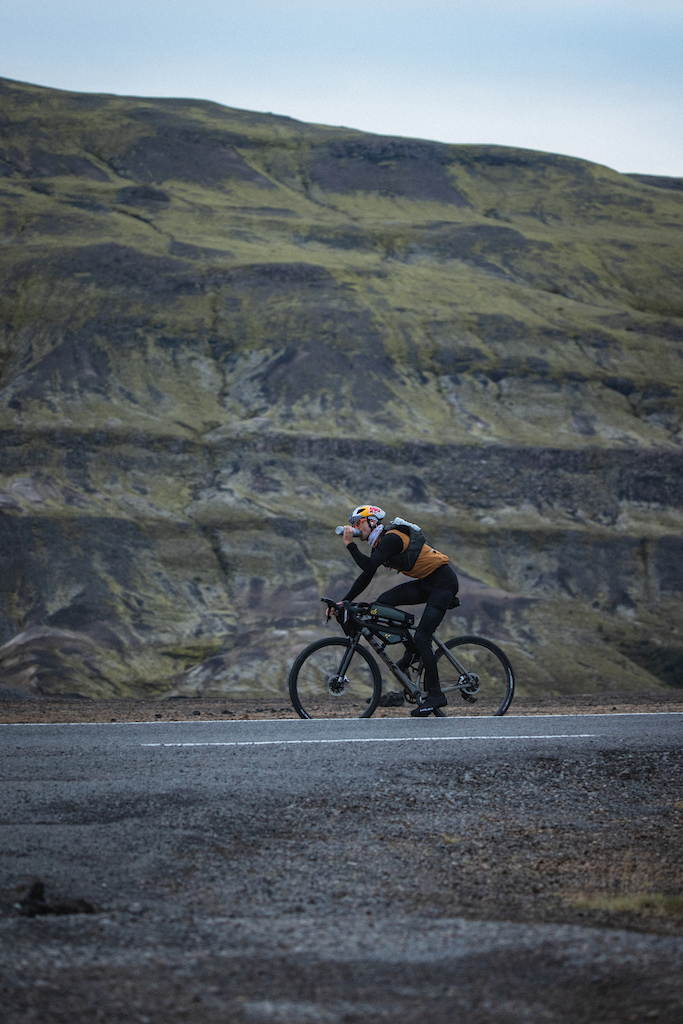 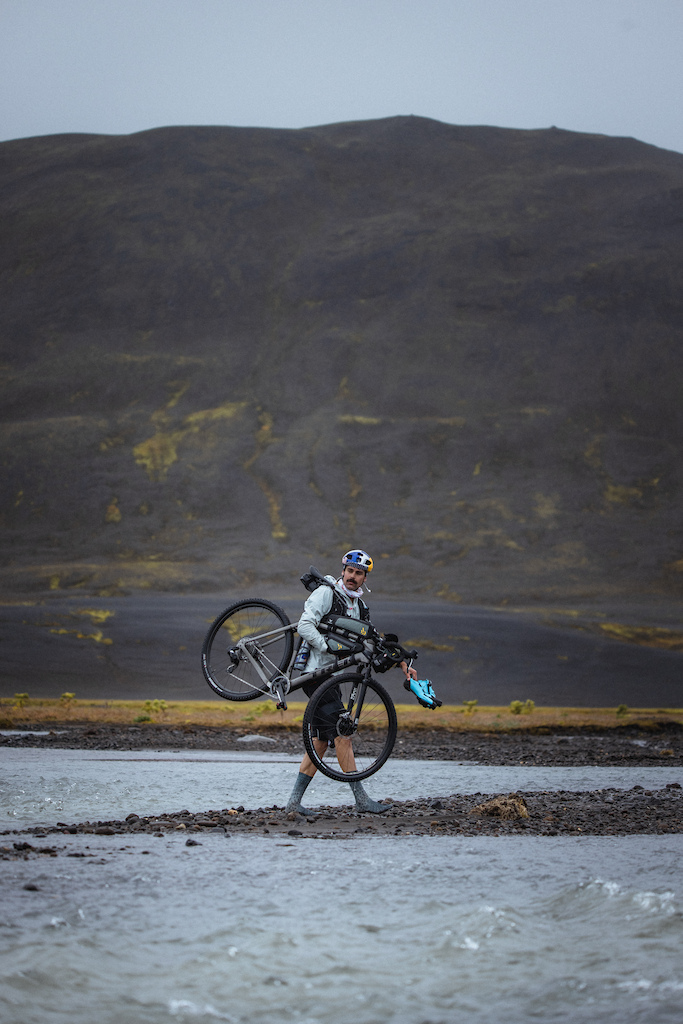 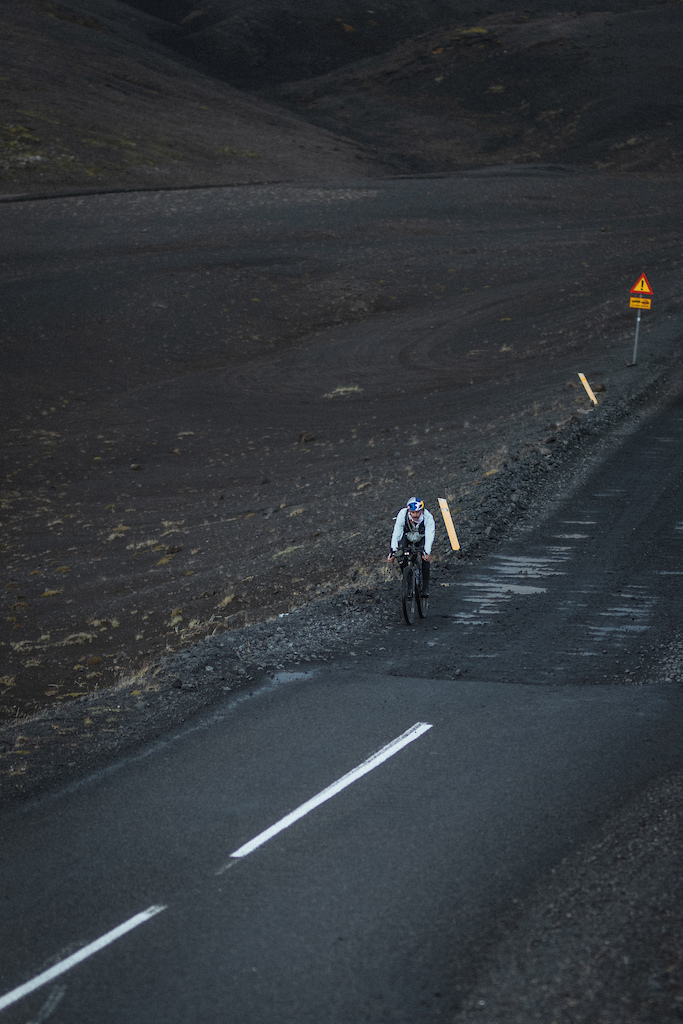 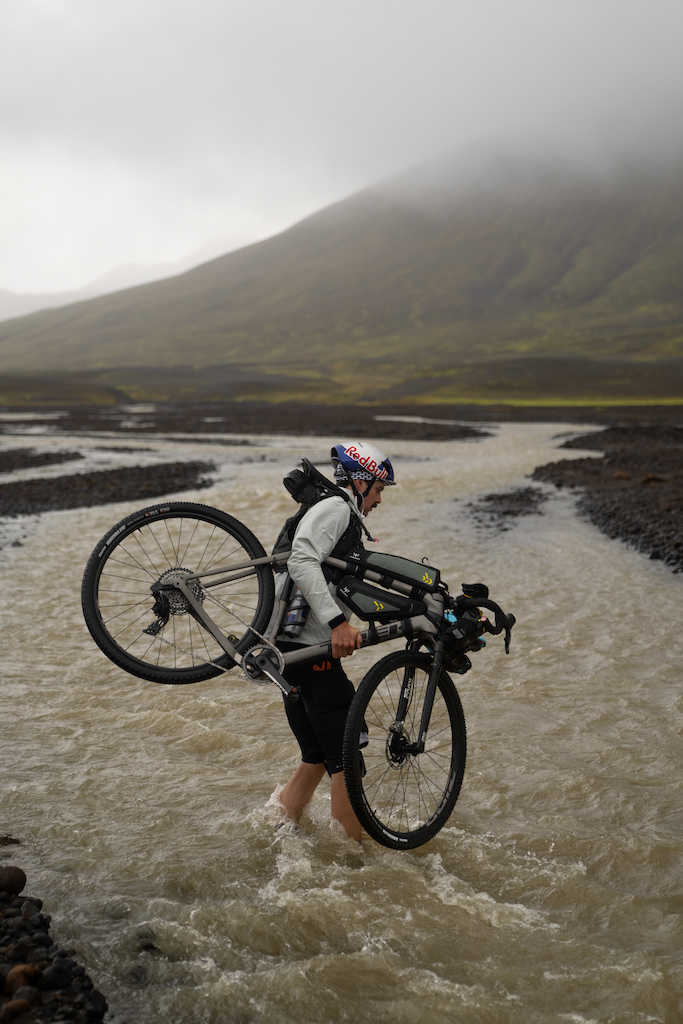 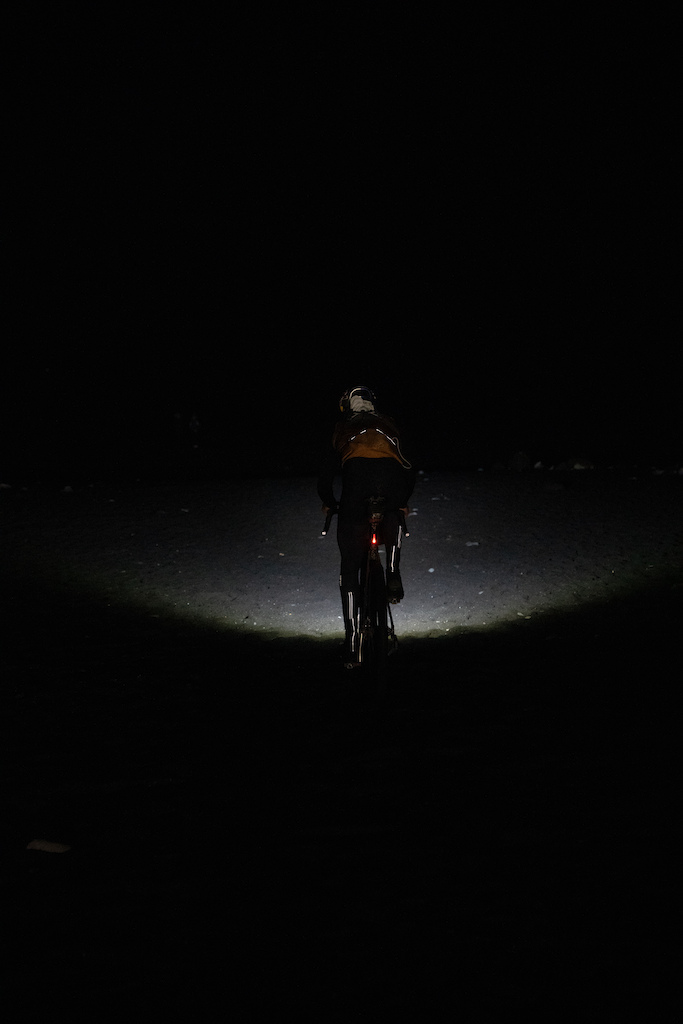 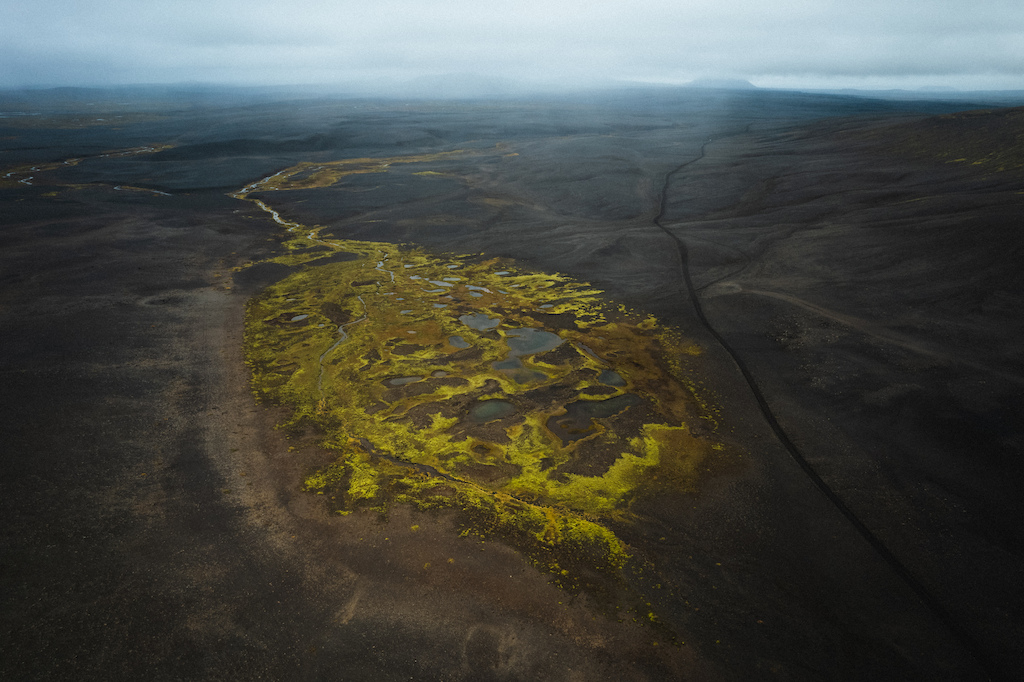 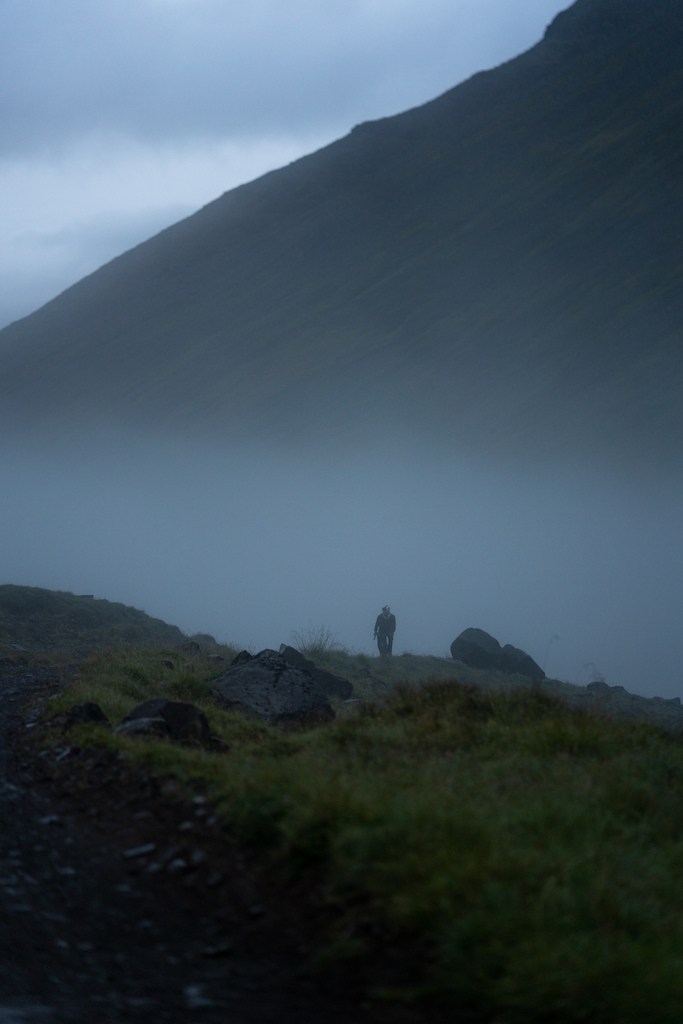 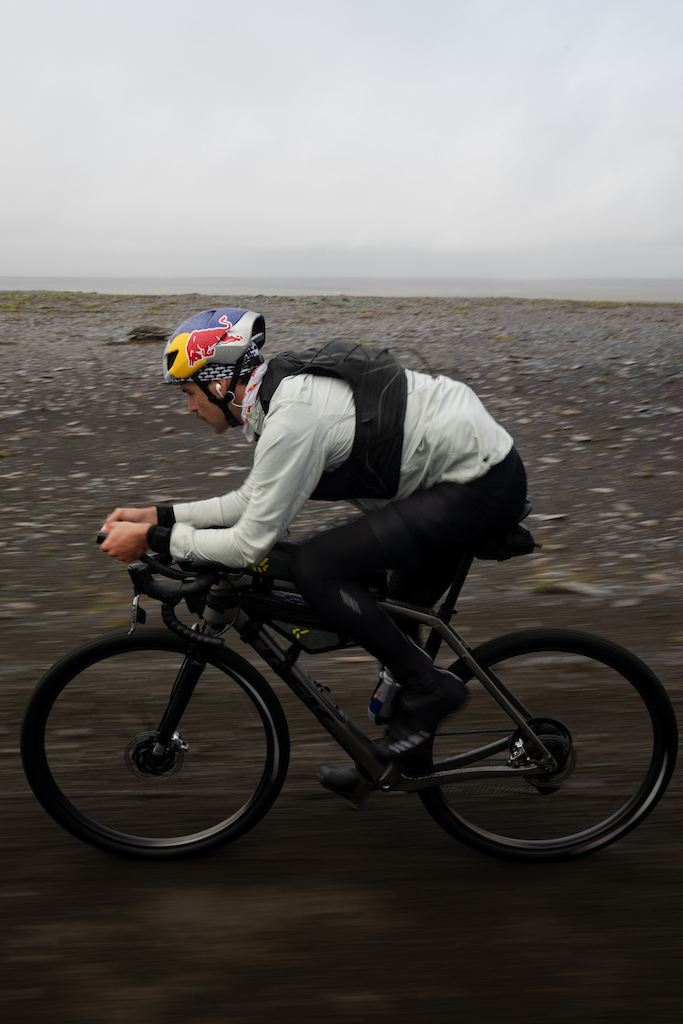 unambitiouscyclist (Sep 15, 2021 at 7:10)
"Shameless Plug" You should check out his Podcast The Adventure Stache. He goes through his whole trip with Chris Burkard, Leal Wilcox, and crew in Iceland. He has also interviewed Jolanda Neff, Kate Courtney, and a bunch of other mountain bike racers in the past (for all the haters saying he isn't about mountain biking). All great stuff!

itsrainingdans (Sep 15, 2021 at 5:55)
"It's not mountain biking," blah blah blah cry me a river this man took more ball punishment in 19 hours than most mountain bikers take in a year. Also I like all the bikes so maybe I am biased.

lefthandohvhater (Sep 15, 2021 at 8:29)
No. People only care if their fragile masculinity is threatened by a woman who is sicker than they are.

lefthandohvhater (Sep 15, 2021 at 13:06)
@Serpentras: Hehehe found the guy from the tour divide facebook group who cries when women go faster than him

laceloop (Sep 15, 2021 at 5:50)
i like this sort of content. mountain bikers are part of cycling and that is an impressive feat that happened on a bike. hell that thing even has a fork on it so its sort of a mountain bike.

blackercanyons (Sep 15, 2021 at 9:25)
I've spent about 3 months in Iceland, and have seen the entire country except the very middle, and all I have to say is...this is insane. anyone bitching about how this isn't mountain biking needs to shut the f*ck up. probably 16 hours of his 19 hour ride was through 100% uninhabited wilderness, of the kind that doesn't exist in the US or mainland Europe anymore. not to mention, endless lava fields.

iammarkstewart (Sep 15, 2021 at 7:03)
There's a lot of cool stuff and many takeaways packed in here, but the main thing is that I got ripped off by the facial hair gods. That is epic. Name is a massive cherry on top of that 'stache sundae.

Wow, the first 40 miles of that ride look like a slog.

dlstucki (Sep 15, 2021 at 6:41)
Hell yea dude. After riding in Iceland for 10 days and then racing the Rift (only 200K), I can only imagine how gnarly this ride was. It's a constant beat down in Iceland with the weather. Beast.

rabidmonkfish (Sep 15, 2021 at 5:08)
Wow amazing achievement.....can't even begin to imagine how tiring that must have been. To say "well done" doesn't do it justice

eekamouse (Sep 15, 2021 at 1:39)
I can still feel the pain of the freezing water in my legs and feet when I see him crossing the river barefoot

zoobab2 (Sep 15, 2021 at 9:04)
Lauf is from Iceland, they made this weird fork with carbon blades www.laufcycling.com/our-story

LouWeed (Sep 15, 2021 at 14:52)
I was thinking Daniel Day Lewis as Daniel Plainview or Bill the Butcher. He drinks your recovery drink. He drinks it up!

Jmac888 (Sep 15, 2021 at 2:50)
Not mountain biking, but happy to see this sort of content here (in moderation). I love Iceland and this is an amazing achievement for sure- well done Payson!!

VTwintips (Sep 15, 2021 at 2:34)
Is this a sign that pinkbike.com is changing? When a high profile bmx segment made it into movies for your Monday, you were stoked on it, but it was also only 10% of movies for your Monday. As a person who rides gravel sometimes, I appreciate this. I don't know how I feel about this as a mountain biker. Unpopular thought: this shouldn't be on the homepage. There's zero photos of mountain biking in this article.

Grantma (Sep 15, 2021 at 4:34)
But there has always been stuff beyond just mountain biking here. If you only look at MTB, there is so much you are going to miss

Gaurav-Nandyala (Sep 15, 2021 at 5:29)
Peyton is also an avid MTB. His youtube videos show him riding multiple trail systems breaking records like this. In my opinion this article is Just like the one a couple of months back about the death route attempt by those canyon riders.

neologisticzand (Sep 15, 2021 at 5:37)
@Gaurav-Nandyala: Plus, I believe he's also been US National Champion for XCM before

drmantistobogganmd (Sep 15, 2021 at 0:46)
First e-bikes and now road bikes? What is going on Pinkbike. Oh yeah, you whored yourselves.