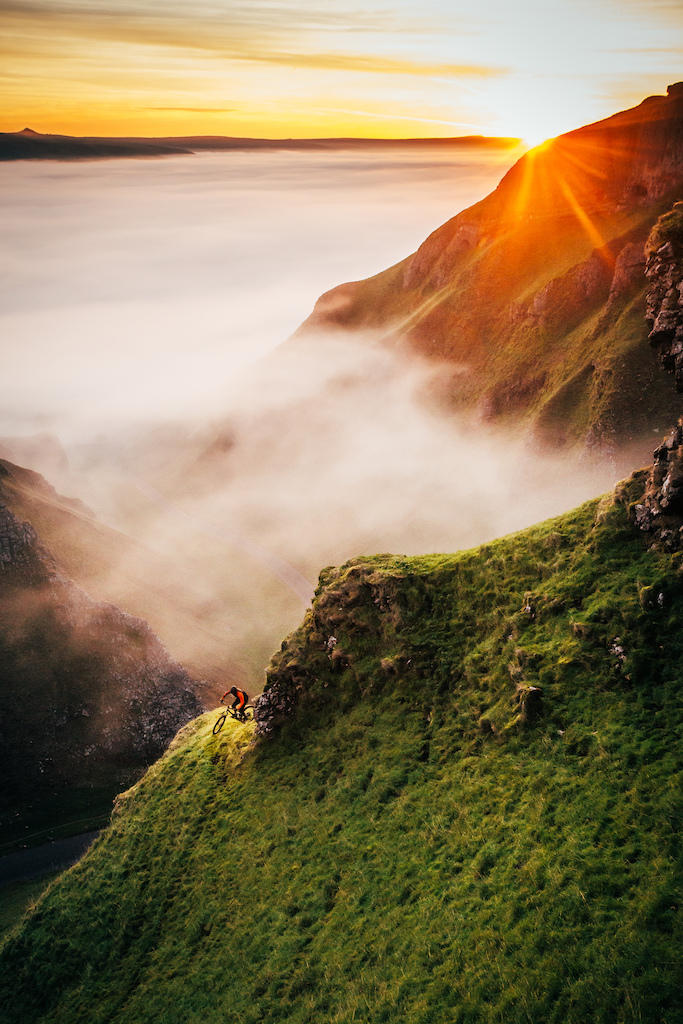 Richard Baybutt's winning photo was pitted against some fierce competition throughout the 2018 Pinkbike Photo of the Year contest, including Sterling Lorence's carefully planned “Drone Strobe” shot with Brett Rheeder and Thomas Gaffney's perfectly composed tree shot among others. After a frantic three days of voting during the final round, Richard's shot of Winnats Pass with an inversion and stunning morning light was the one to take the competition.

We caught up with Richard Baybutt to learn more about his winning photo.

Not confident at all! There were some unreal shots in the line-up and I was just happy to be on the list.

I am the photographer / marketing manager / mechanic at Cotic, a bike company based in the beautiful Peak District and we were launching the new UK built RocketMAX. We’d gone out the evening before to a different spot to get a load of sunset photos. Whilst we had the bikes and the weather was behaving, we thought it’d be a great opportunity to try something at Winnats Pass. Even if it had been raining sideways, it’s an awe inspiring location so we knew we could get something, but no one (especially me) thought we’d get that lucky with the cloud inversion - it’s pretty rare.

The time and location were planned but we kind of just made it up as we went along. It was only me, Will & my dog Otto out there. It didn’t take too long and we were back in work before 9am to get the shots online and launch the bike. There wasn’t much chance to dwell on what we’d done as it was pretty hectic in the office. We did say to each other at the time that it was a real treat to get up early and just be out there.

Winnats Pass is such a great spot in the Peak District. I’ve watched road races climb up it, I’ve snowboarded down it and it’s the valley over from where they filmed bits of “The Princess Bride” back in the day. I drove the whole way from my house in clouds, thinking the shoot was going to be a bust but seeing the stars pop out as I reached the top of the pass was the best feeling.

It’s such a steep hill, the grass was dewey and the sheep shit was extra slippery, so we only had a couple of runs as climbing back up wasn’t an easy task.

How does it feel during each voting round?

It was such a treat. I genuinely couldn’t believe that I’d made it through each round. The best moment was last week when the whole Cotic team & staff were up in Scotland for our training camp / team launch. Stoke was high for the weekend ahead anyway, but then we found out the photo had got to the semi’s on the Friday night and it all kicked off. Big party.

Steve Shannons is the one I’d hang on my wall for sure. Sterling’s was phenomenal - I love off-camera flash work and combining it with a drone, in such an amazing place, with Rheeder doing his thing, is a magic recipe. I’m also a sucker for a dog photo so it was brilliant to see Lumi in there. Any one of the 32 could have won so I’m extra especially chuffed it’s me. Thank you to everyone who took the time to vote.

Any plans for the winnings yet?

Some new camera equipment or an adventure to somewhere new and exciting? I’m splitting it with my buddy Will (the rider in the photo) and I promised the dig crew at Bolehills BMX track a round of sandwiches.

You should check out Cotic (@coticbikes) as they’re the most fun bikes, visit Bolehills BMX track (@bolehills) as it’s the raddest place, and try to be excellent to each other, in real life and on the bottom half of the internet. Thank you Pinkbike & Jenson. Peace.

cotic-bikes (Mar 19, 2019 at 5:03)
We are so proud of you Rich! I hope Pinkbike don't mind us posting up here, but this shot is just one of a host of shots Rich bagged during that hectic 18 hours with Will and Cy riding. If you like this one, there are a fair few more to enjoy too

djbutcher13 (Mar 19, 2019 at 5:32) (Below Threshold)
Oh man! The one with him and Otto looking out over the abyss is awesome. Too bad there's chem trails in the sky! #saveMTBfromCHEMTRAILS

djbutcher13 (Mar 19, 2019 at 5:03)
This line will be irrelevant in a few years when Pinkbike finally decides to do the right thing and put the comment section first, before the article. I mean that's what we all want right?

Brent-F (Mar 19, 2019 at 5:30)
Congrats on winning the most preferred photo from a group of winning submissions. To have a photo even considered in an accomplishment, winning is just the cherry.

anyexcusetoride (Mar 20, 2019 at 3:32)
I love that this photo won, brilliant shot and well done Mr. Richard. You come across as a super nice fella in your interview, enjoy the win!

LetsLaunchOverIt (Mar 21, 2019 at 12:05)
Dang I just wanna ride that natural cobble chute in that Flickr album. Dig that bike too, welds are so tidy and slim looking.. Killer shot and humble attitude, nice work

railin (Mar 19, 2019 at 9:19)
Of all the inherent hazards I've encountered mountain biking, slipping off a cliff on sheep shit isn't one of them

TheStabbyCyclist (Mar 19, 2019 at 4:06)
Never voted for the photo but congrats to Richard. Hopefully he'll use his winnings, time, and resources to capture a photo that I'll vote for next year.

panchocampbell (Mar 19, 2019 at 6:16) (Below Threshold)
I never voted this photo either, to me it looks like the rider has nowhere to go from there !!