Photo Story: A Solo Adventure in the Italian Alps

The alps are the most populous mountains in the world. It's difficult to find a place where no lifts, huts or even streets are. Escaping from the civilisation for a few days is a challenging mission but I packed my bike and backpack and went for an adventure. 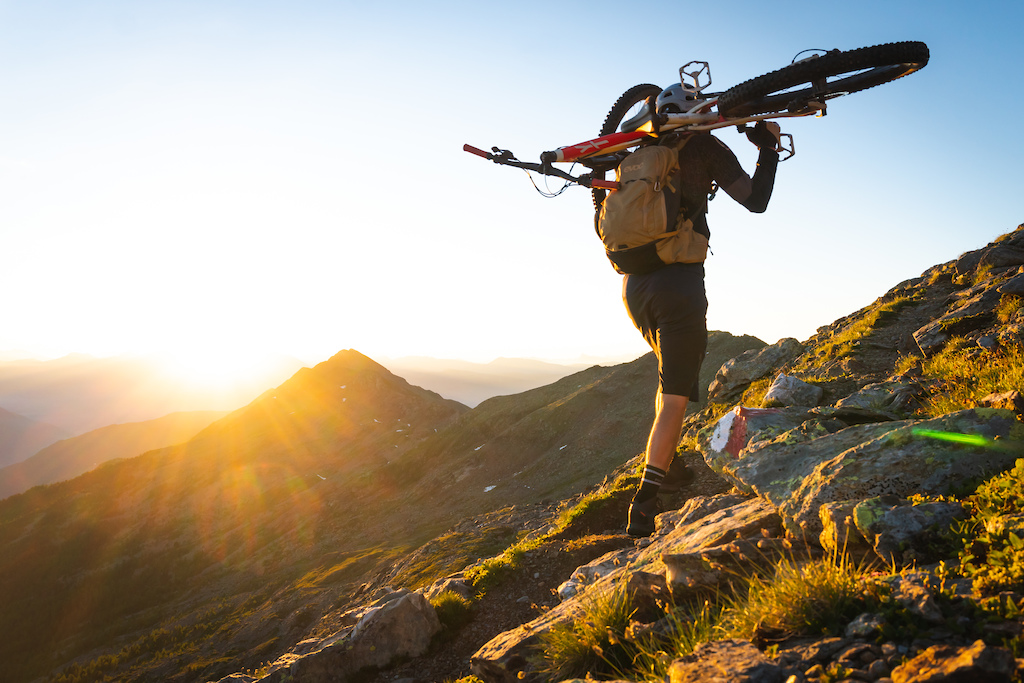 My tour started at the lift station at the Tarscher Alm but I decided to pedal up to the lodge because it's a good climb to get the tired legs used to the uphill. After an hour I reached the Tarscher Alm and the terrain changes, I had to push my bike until it was impossible so the carrying began. At this moment I had no idea how long I have to carry it because I reached the first place where I could possibly stay for the night at midday. I took a short break, enjoyed the outstanding view over the Vinschgau valley and made the decision to hike on the ridge of the mountain until the day ends. I had no idea how many kilometers or vertical meters I had to go but I printed a map of this area in advance to get a feeling for the distance.

The terrain changed again when I crossed the tree line. At the top of the Hohe Dieb Scharte, the first downhill segment of the tour was directly ahead, I took my bike off my shoulders, jumped on the bike and rode my bike across a big snowfield. At this moment I could see the trail for the first time. I was a bit disappointed because it was absolutely not possible to ride a bike on this trail, even walking down with the bike was really scary and challenging.

At the end of this descent, I reached the Kofelrasterlakes where a lot of other people enjoyed the beautiful day at the bank. I took no break at the lakes because with passing the lakes my last possibility to get down the mountains was gone and I had to walk for another three hours until I reached the next spot for a descent. The lakes were followed by a short downhill segment which I enjoyed to the fullest but as a result of riding down, I had to hike up the mountains again. In the next hours, the sun burned relentlessly and the climbs got tougher and tougher. In the end, I reached the three Plomboden lakes with a lot of pain in the legs and refilling the water bottle multiple times. I was thinking for a moment to build up my place for the night but the view was not as good as I thought it would be on top of the mountain. I picked up my bike again and hiked until I arrived at the top of a mountain with an outstanding view over the Vinschgau, the Similaun and the Dolomites. Lucky the mountaintop was covered by grass which will make the night a bit more comfortable 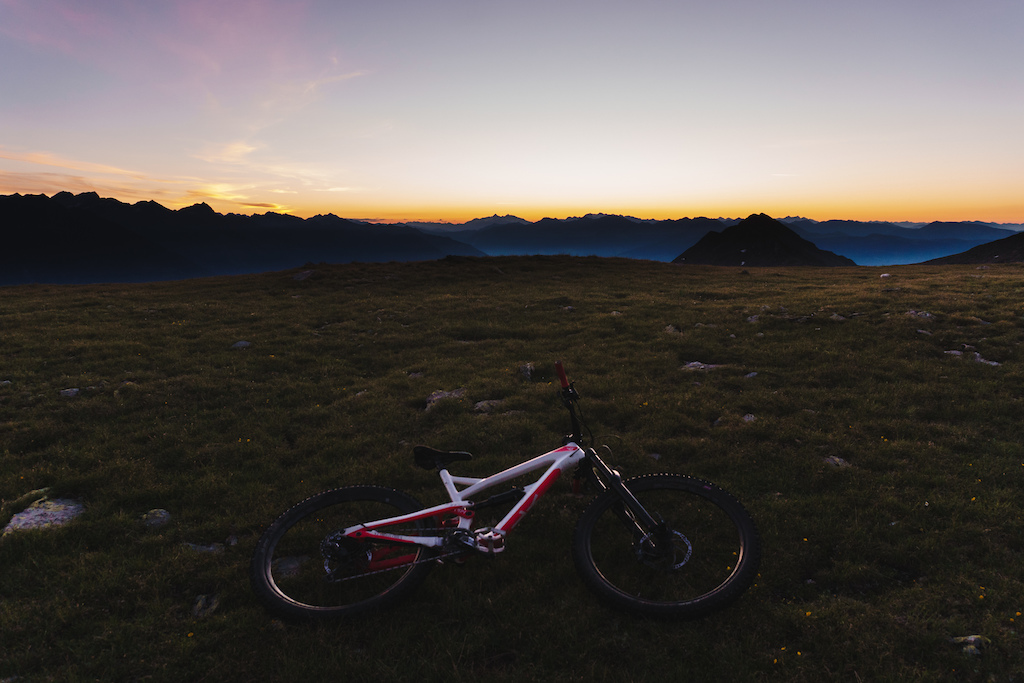 After I changed my clothes and enjoyed the view to the fullest, it was time to build up the camp for the night. I decided to sleep next to a big stone which was heated up by the sun over the day and will be like an oven in the night. 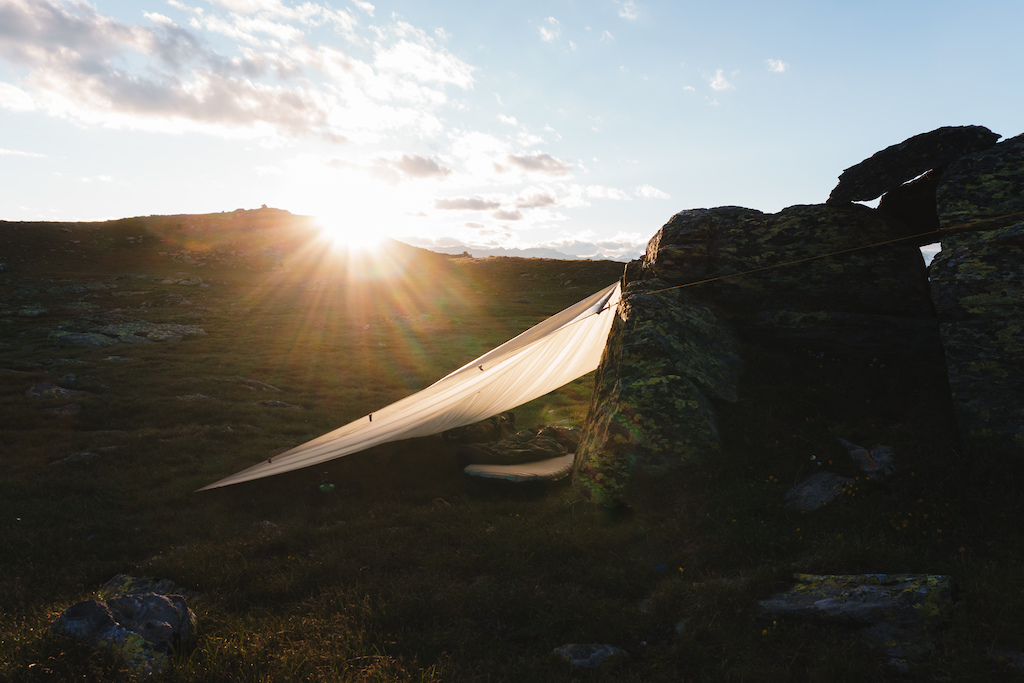 In the last two hours with daylight, I cooked dinner. It's always great to bring some pasta to the mountains for the Italian flair. This was followed by taking some riding pictures in the sunset and in the end, I was only sitting on a stone catching up the last sun rays and watching the sun setting behind the mountains. 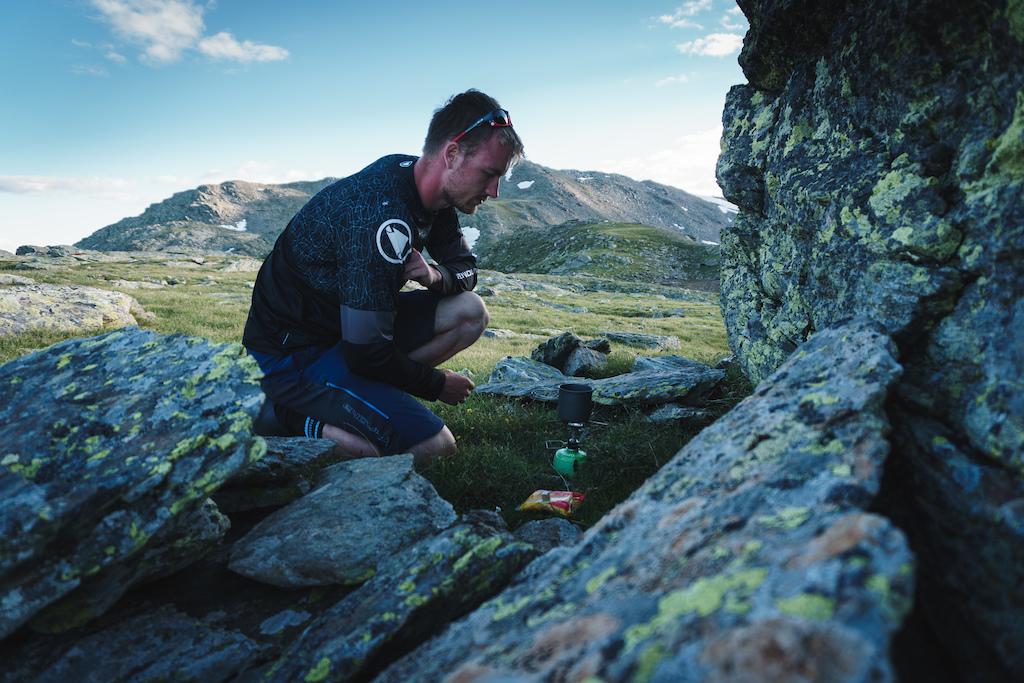 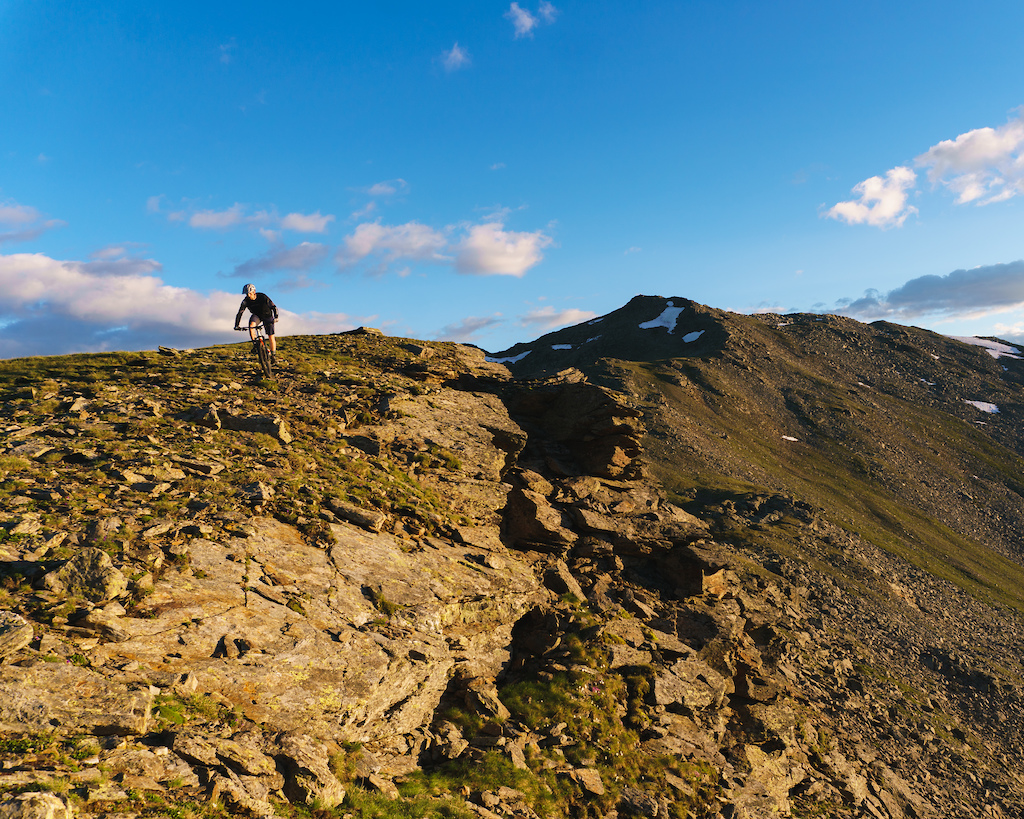 It was time to go to bed now after the exhausting day. I crawled into my sleeping bag and tried to sleep. Due to the warm wind in the night, it was hard to get a few hours of sleep because the tarp made a lot of noise and in the end, I only slept on my sleeping mat without the sleeping bag.

In the morning when I saw the dawn I wanted to look at the watch of my mobile phone and I realized that I took an empty power bank with me, so I had no idea what time it is and when the sun will start rising. First, it was a strange feeling to know that I'm totally alone now, I can't make a call when something will happen but after a few minutes I was absolutely fine with the circumstances and it was even better without the phone.

In the next step, I put my clothes on and get up from my campground. I could see the morning glow over the dolomites. It seemed that I had some time left until the sunrise which I used to pedal a bit to get the tired legs fresh again. 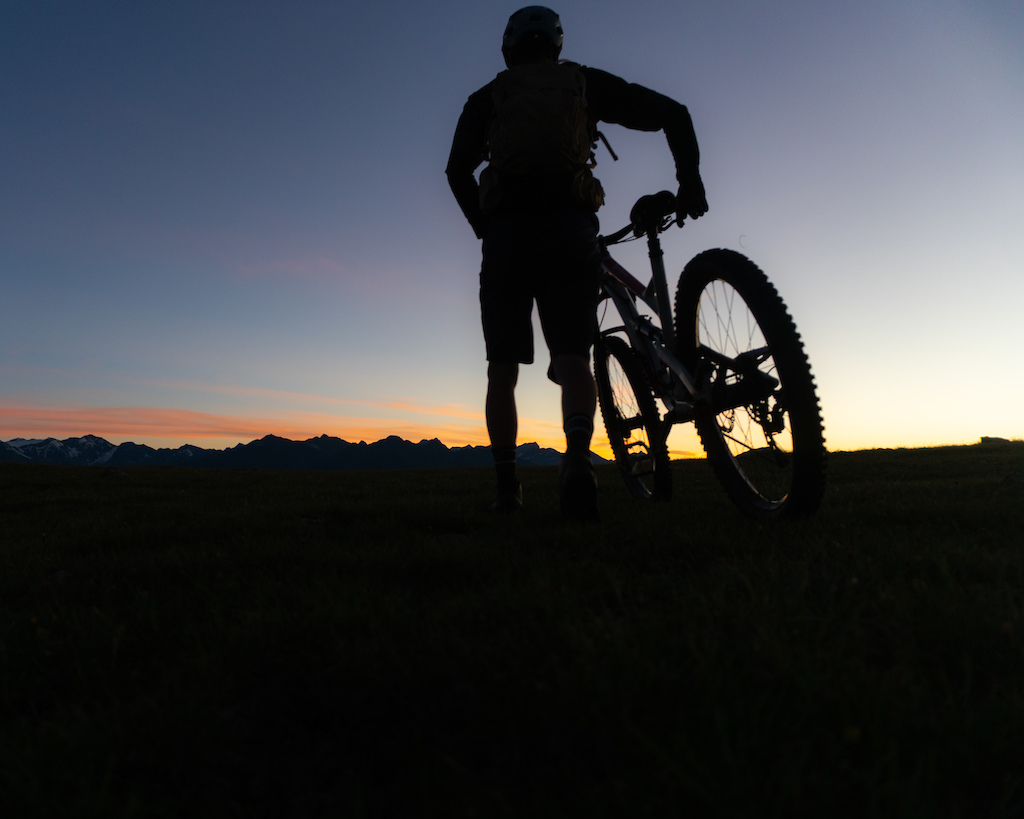 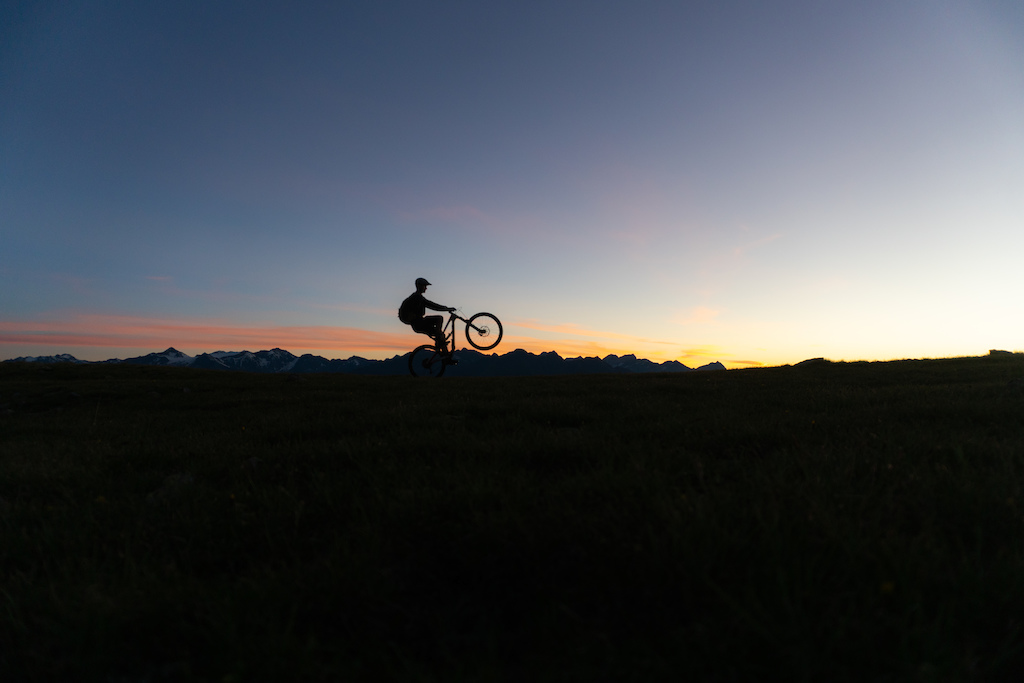 In the next few minutes, I had to hurry up because the sun was rising behind the dolomites, I jumped on the bike and rode a harsh trail. 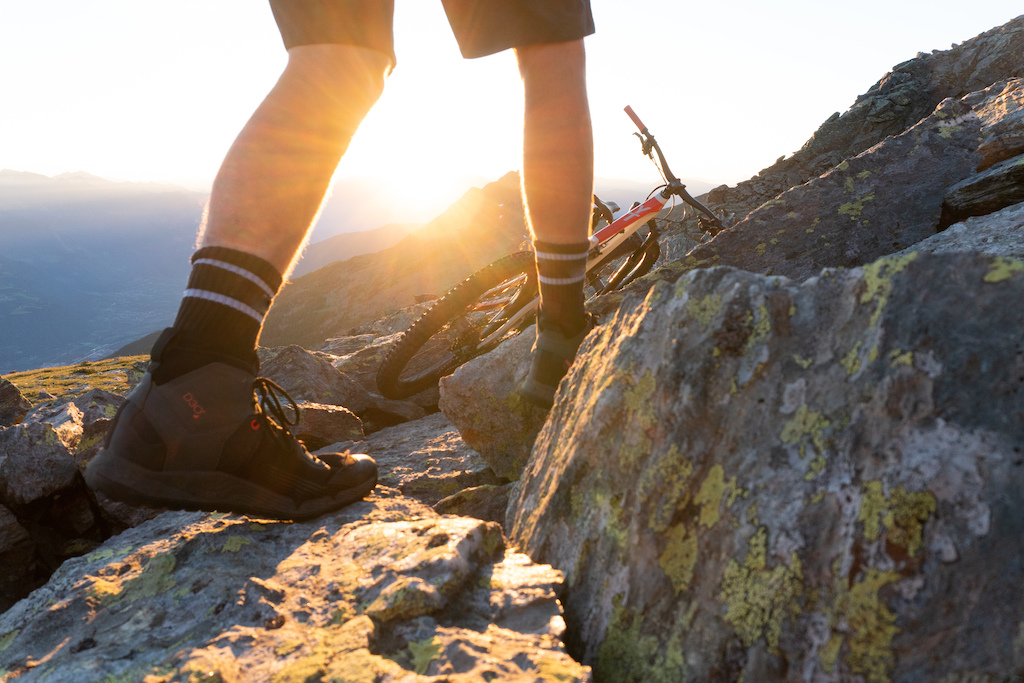 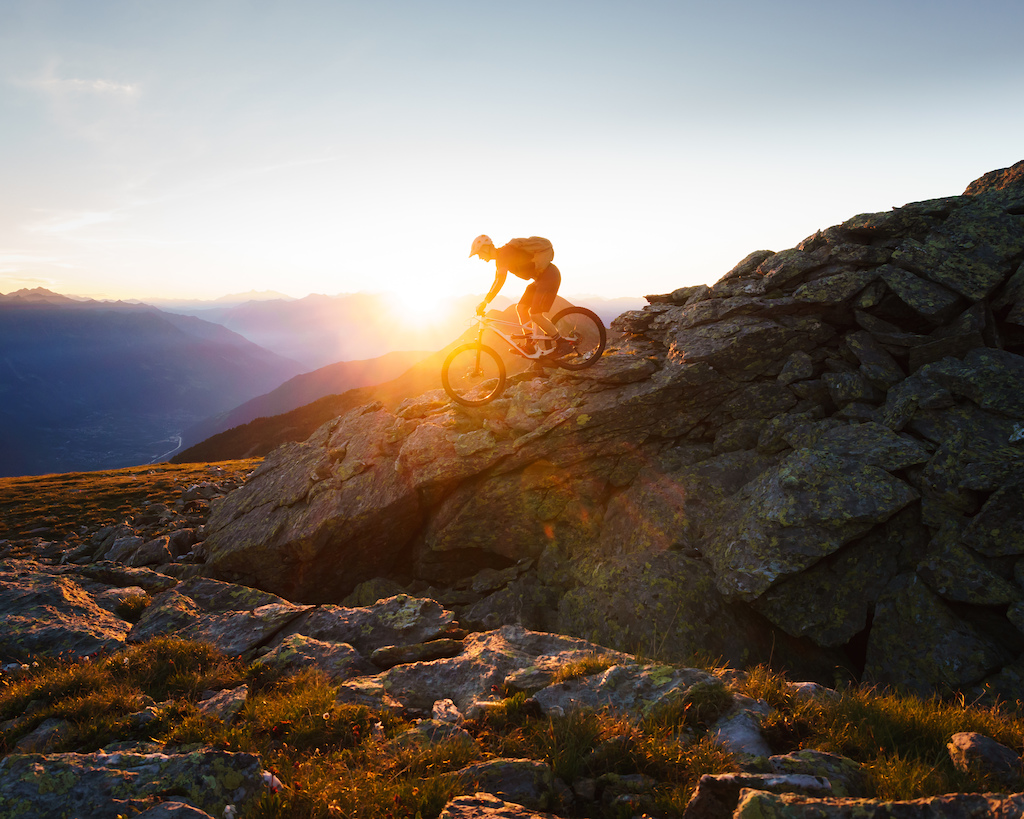 When I finished the short ride I decided to go down the mountain as early as possible because I was extremely sunburned from the first day. I packed my things up took a quick look back, realized one more time the beautiful location I had spent the night and started descending the mountain back to the Vinschgau valley. 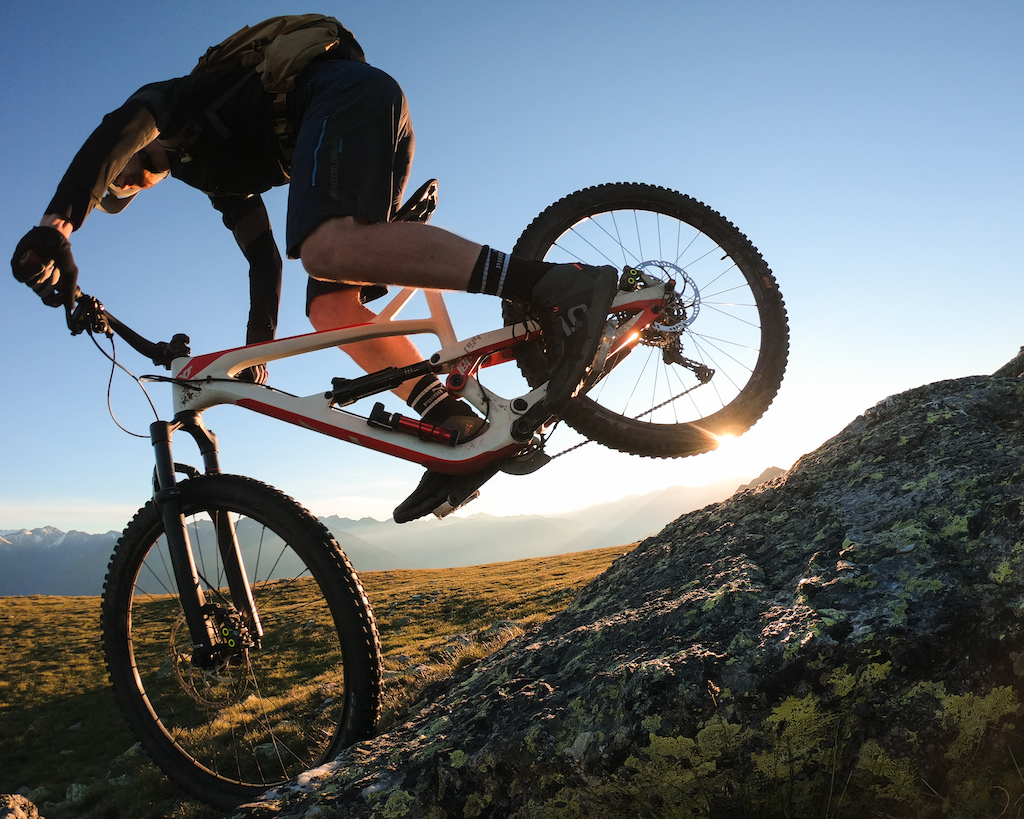 The first part of the downhill was extremely technical with a lot of switchbacks, big stones and ridges which you do not want to fall down. With descending the terrain changed a lot. The trail changed from rocks to grass and later the first trees showed up until I reached the lake at Zirmtal. This was only a short part of the 2000 vertical meter downhill and the fingers are already hurting a lot from the breaking. The trail is going through the forest which is great because the sun is already burning a lot.
If you want to see more of the downhill, watch this video, it's with german commentary only but you can watch the descend.

Back in the valley, I was totally exhausted but I was lucky to have a short break at a friends house. After the break, I thought that I had to pedal only a few minutes back to my car but I was totally wrong. On the one side, it was a longer way than I thought and on the other side, there were way more vertical meters. Two hours later without any water left and in the midday sun, I was back at the car.

The tour was really spontaneous and a lot of "going to the unknown" but I would definitely do it again. If you have any questions feel free to hit me up.

Riggbeck (Aug 10, 2020 at 4:50)
That valley is a trail teaser, from the comfort of the valley cafes everything above you looks like a flow line. In reality I've found everything from a mostly ridable 80km loop with a single drop 2400m smiling decent to 20 km loops where i think i walked a fair bit up and down! I'm so white I can never forget the factor 50 suncream either.

rider001 (Aug 9, 2020 at 6:59)
Thanks for the share; great job on the ride/hike and film. Also great job challenging the notion that bikepacking need be done on a specifically kitted-out bike. Ride on.

manuelurban (Aug 9, 2020 at 13:40)
I really try to travel as lightweight as possible because the downhill must be the best part of the tour ;-)

Inertiaman (Aug 8, 2020 at 8:28)
So if I followed the story correctly, this was literally a full day hike-a-bike in direct sun, without sunscreen, followed by a near-sleepless night, to access a single 6000' descent?
I recongnize that good rides are found across a wide range of the suffering-to-joy ratio, but it seems you'd be hard pressed to contrive more suffering and less joy.
To each his own.

nurseben (Aug 8, 2020 at 10:37)
It certainly beats sitting at home and posting on Pinkbike ... in fact I think I’ll do me a stooidvepic tomorrow just cuz I can.

Monday arrives far too fast to spend your time on milk toast.

manuelurban (Aug 9, 2020 at 13:38)
Hi dude thanks for your comment, it was half a day of hiking the bike with nearly 800vm downhill in between but if you try to explore new areas with the bike you do not know if you can ride uphill or have to carry the bike. For me it's the same to ride an enduro bike up a mountain or to carry it. I can promise you that I do things which I really like to do and if I would not enjoy stuff like this to the fullest, I would not do it.
Post a Comment