Photo Story: Exploring The Most Gorgeous Landscape In Turkey 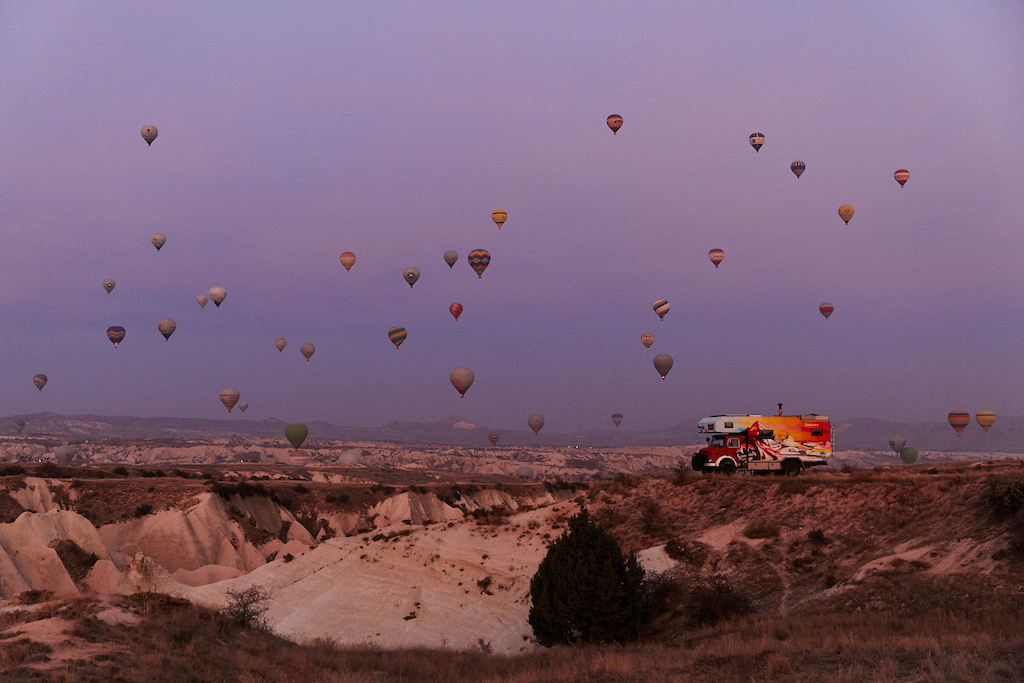 A JOURNEY BY SNOWMADS

If you ever find yourself thinking about which destination you would like to visit whenever the leaves turn brown and the days get colder and shorter, it’s usually Italy, Spain, Portugal or New Zealand. Those countries always come to mind in the first place, maybe because they are well known for mountain biking or maybe because you’ve already visited them two, three or ten times. You might even find yourself booking the same hotel, eating the same food, seeing the same views, and riding the same trails you’ve already ridden for years in a row. But why wouldn’t you once in a while step out of your comfort zone and take a risk, travel to a country that has never been explored with bikes before. Wouldn’t you enjoy traveling to a destination where the trails aren’t crowded, neither shaped nor you can find them easy on Strava, simply exploring and being adventurous once in a while. Learning more about new cultures is always something truly special and to have a look into other views of life, expectations, and habits those people have. 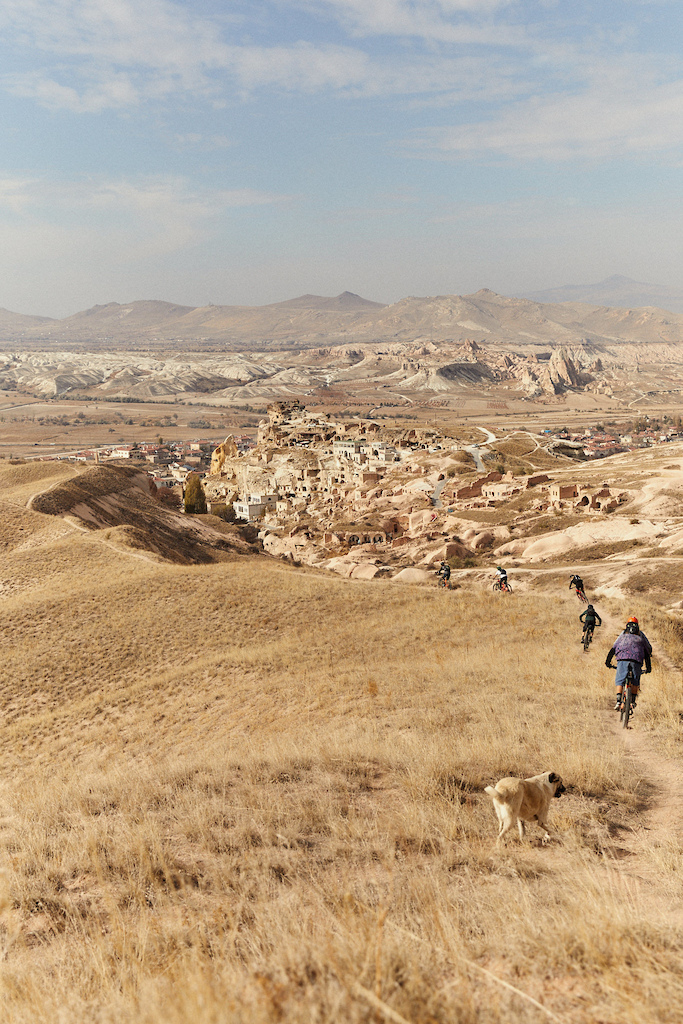 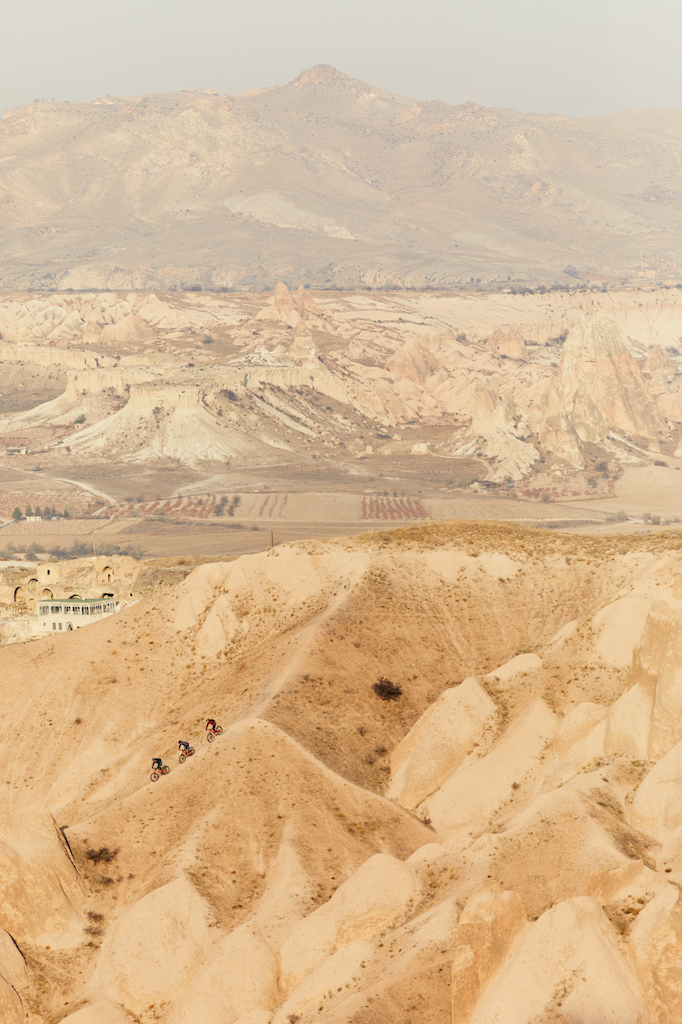 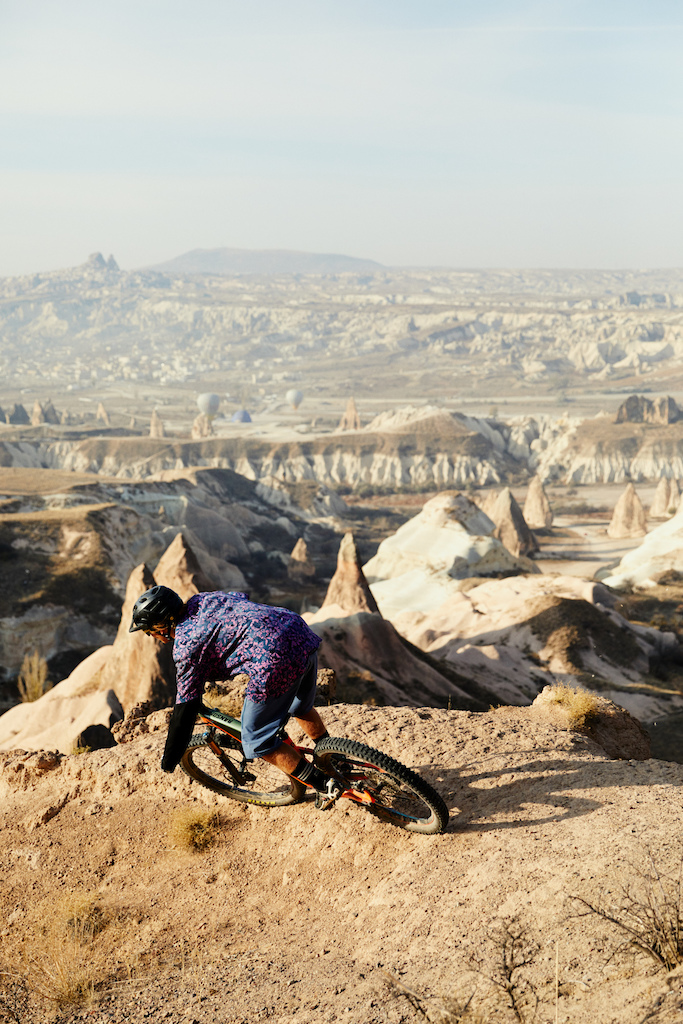 A few years ago a bunch of professional big mountain skiers fell in love with the adventure, quit the contests, built their own home on four wheels and never ever looked back. Since that day they’ve been approaching the most outstanding countries all over the globe, skied some mountains that never been skied before and produced some storytelling movies.The Snowmads are always up for new challenges and decided to add some bikes to their four wheeled home, named simply „The Truck“.

Last autumn the Snowmads started their journey from Austria to Iran. On their way, once in a while they took out the bikes for a ride in several countries. I made a last minute decision, hoped on a plane and joined the boys in Turkey. Our meeting point was in Antalya, with eight people, seven bikes and tons of gear we were ready to hit the road through Turkey. In the following weeks we had it all, from laying on the beach, tanning to hiking in the mountains and sleeping in tents at -15 degrees. All four seasons combined in two weeks and 600 kilometers later we arrived at our biking destination.

Some impressions of the Truck's inside in the link below.
https://www.redbull.com/at-de/videos/welcome-to-my-truck-fabian-lentsch 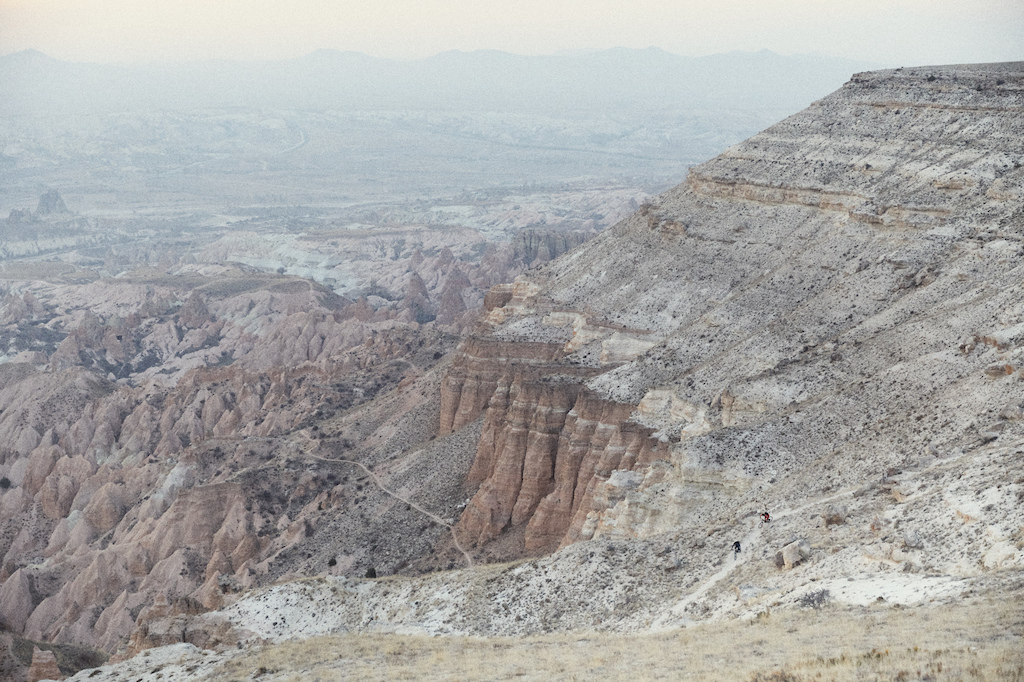 Arrived in Cappadocia, the first thing we did was booking a traditional turkish bath massage called "Hammam" after weeks without showers in the mountains, all sweaty and dirty, some spa time was really needed. We took our time to check out some restaurants, coffee places and spent a lot of time searching for trails all over the internet. We went a lot to restaurants, because it's really cheap in Göreme city compared to bigger cities in Turkey. Our three favorites were the 'Keyif Restaurant', 'Sultan Place' and the 'Pide Place', vegetarian, vegan or meat lover, there's something to order for everyone and everything's unbelievably delicious. I fell in love with the 'Sütlac', it's an Turkish rice pudding and I always ordered it for dessert.

We got lucky by finding some trails and some locals who helped us further. Red Valley is the place to be, about an 15 minute car drive from Göreme town. Once arrived we started to get ready for a bike ride, we usually needed at least an hour to finally leave the truck. Half an hour we spent only looking for our stuff, what a madness it always was, but definitely worth it ! In the Red Valley, there aren't marked trails as we know them, it's a lot of exploring and we usually started off from the 'Sunset View Point' of the Red Valley and rode all the trails that lead down to the Rose Valley, and pedaled back up on the main road. Never before we've ridden such a ground like the one in Cappadocia, at first we needed some days to get used to it and of course we didn't leave the place without a souvenir scar. If you ever plan a trip to Cappadocia, make sure you love Enduro rides, the trails come with a lot of pedaling or as skiers say 'earn your turns'. 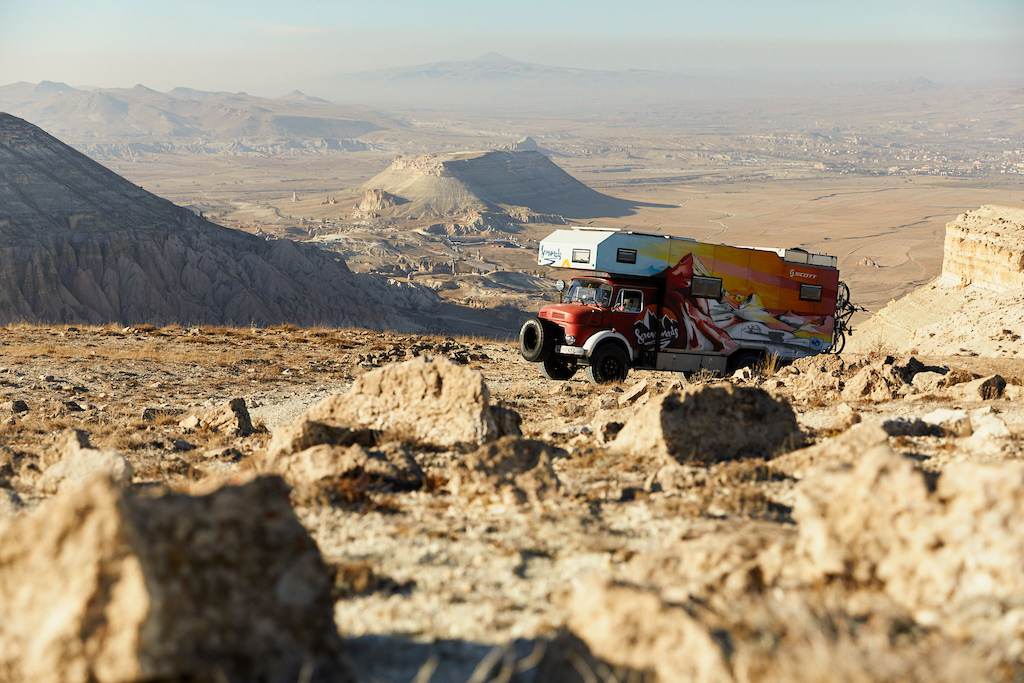 We got on some bumpy roads on our way to the Red Valley and got stuck with the big boy. 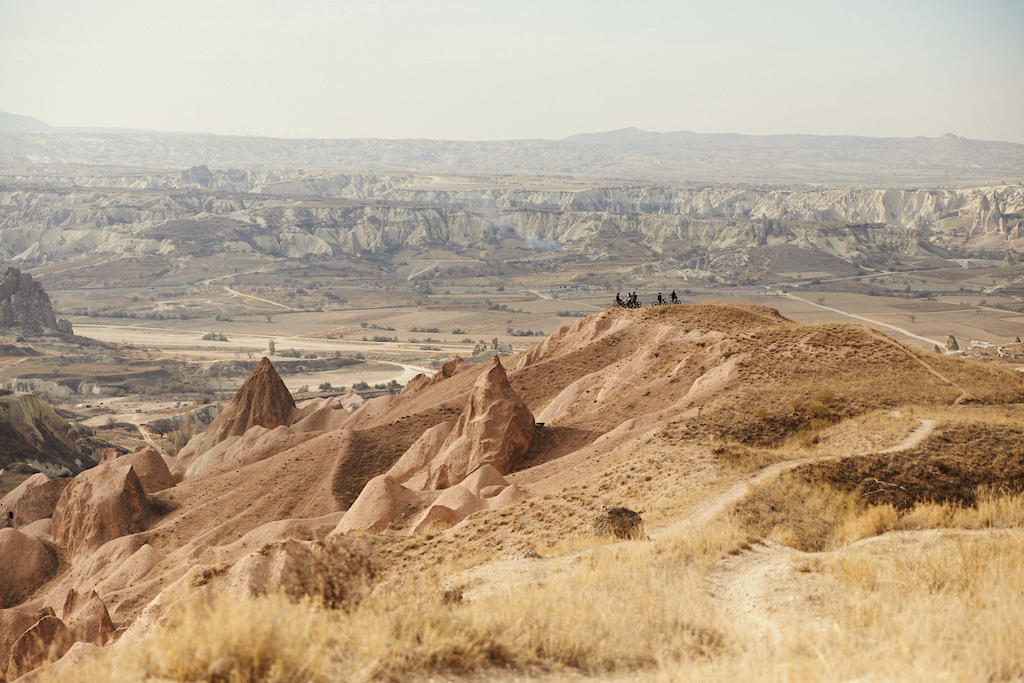 Here and there we had to stop and take a minute to enjoy the unbelievable view. 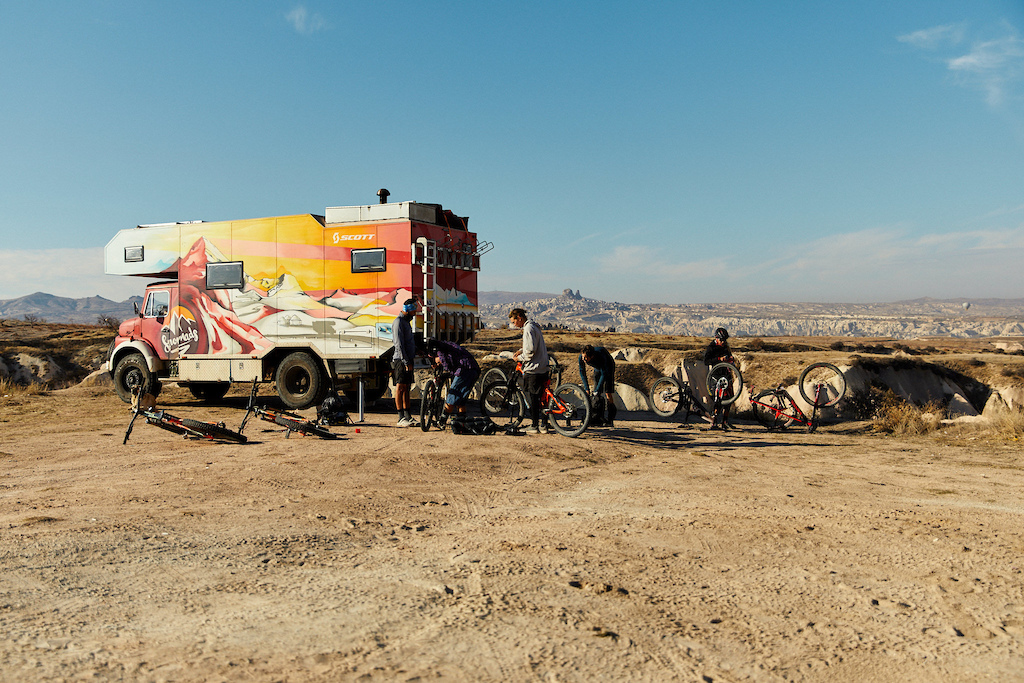 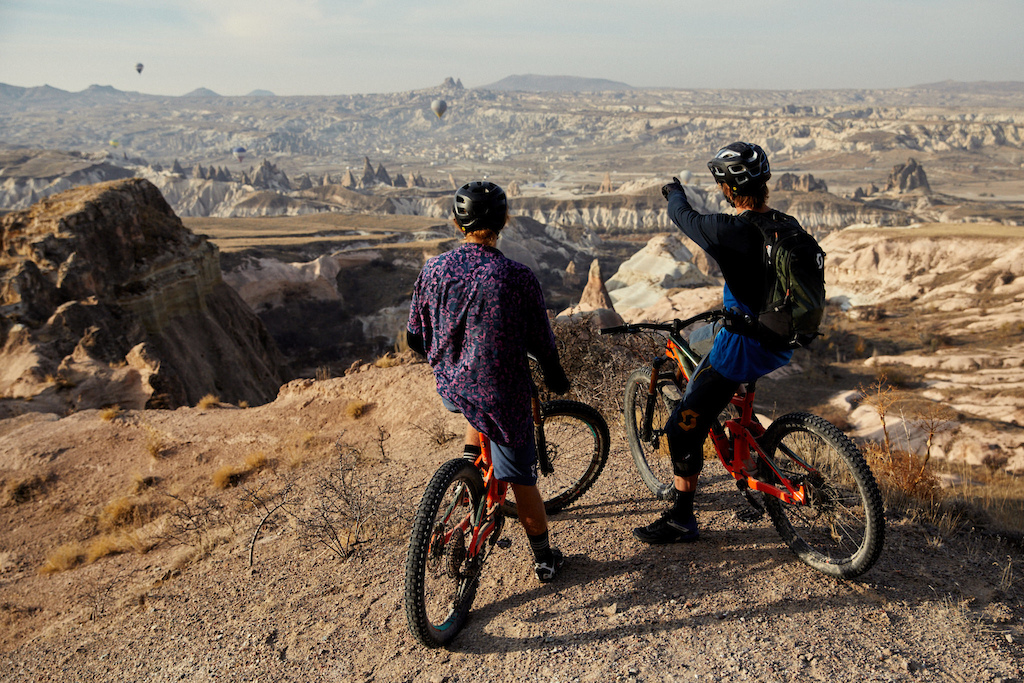 Fabian Lentsch and Konstantin Ottner scouting some trails or balloons? 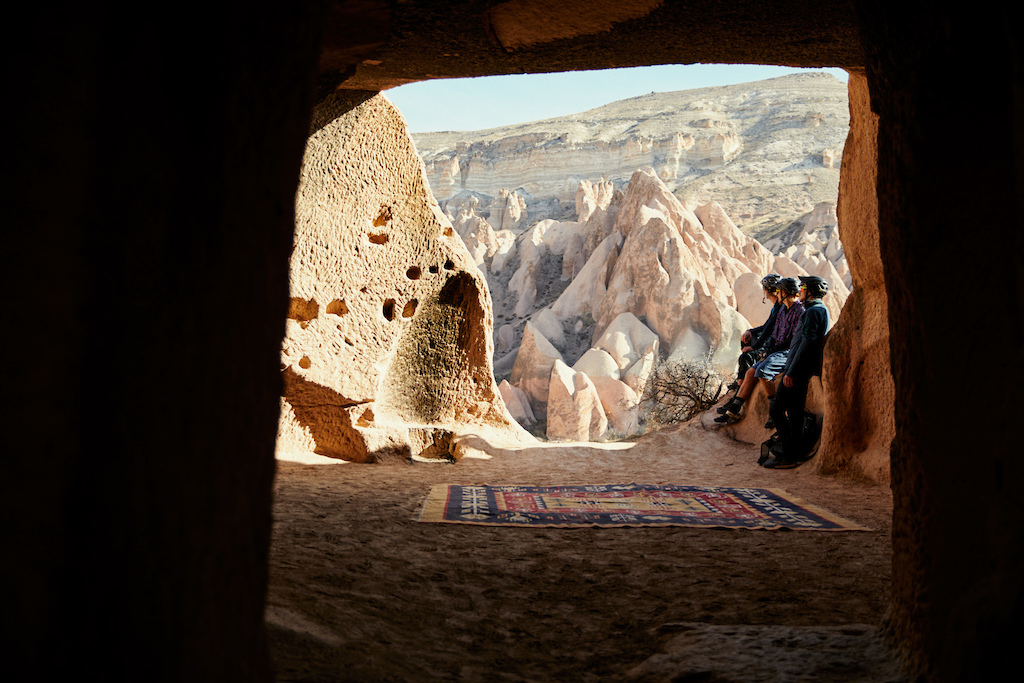 One of those traditional carved caves where the people still to this day live. 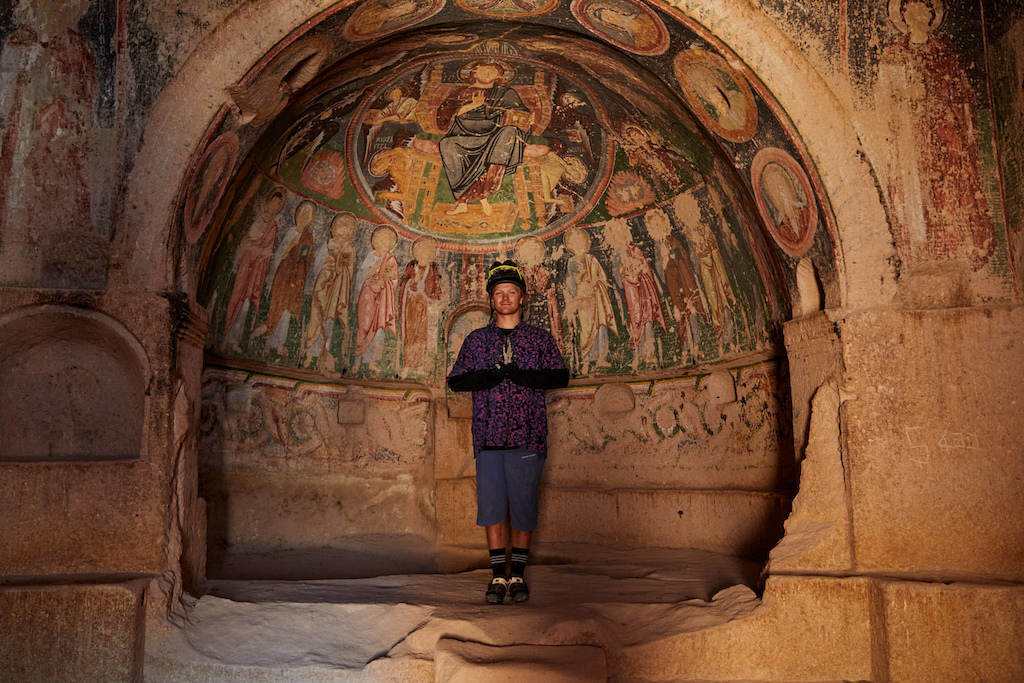 'Konsti the Explorer' in his party shirt. 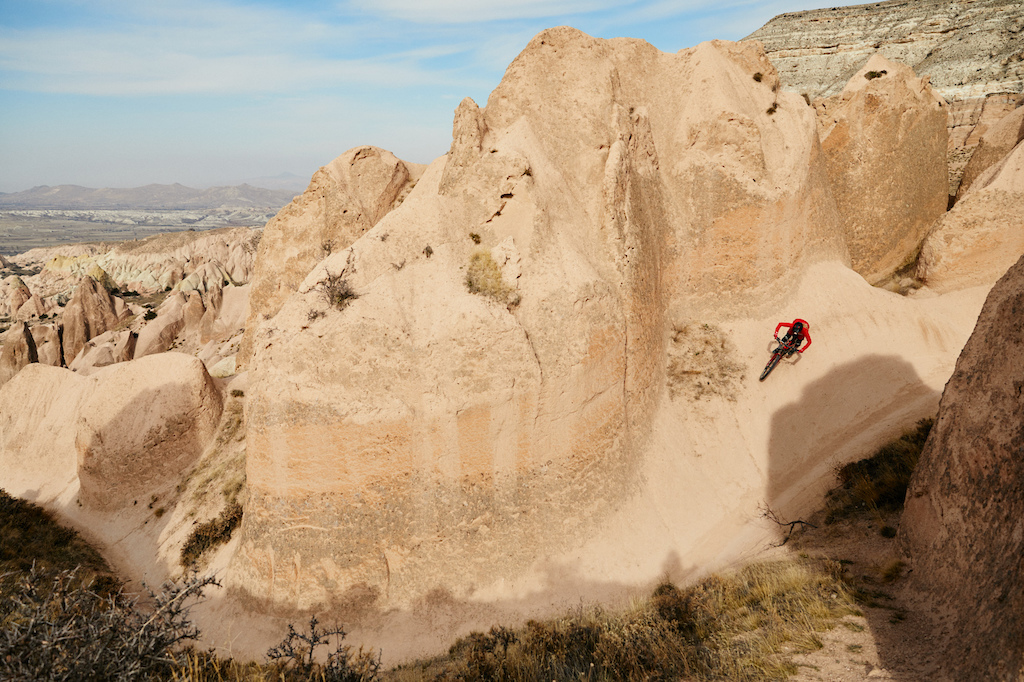 The peaks of three volcanoes – Erciyes, Hasan and Melendiz Dağları – dominate Cappadocia. It was their eruptions, which covered the former plateau of Ürgüp in ash and mud some thirty million years ago, that provided the region’s raw material: tuff, formed by compressed volcanic ash. In the millions of years that followed, wind and water eroded the tuff into odd shapes, including spires, cones, even a camel. In more recent times, a different force went to work on the rocks of this region. People in Cappadocia have been living in caves for literally centuries, right up until the present day. The tuff was soft and easily worked, and people made this place home, hollowing out the rocks, and carving windows, doors, and curving stairways. Locals even carved churches into the rock. In Cappadocia we felt so welcomed by everyone and the locals were usually up for some Turkish tea, no one of us could really speak Turkish so we communicated somehow over google translate. I was really thankful for being a part of this trip in such a beautiful country with the most amazing crew you could imagine, the Snowmads, 'teşekkür ederim' means simply 'thank you'. 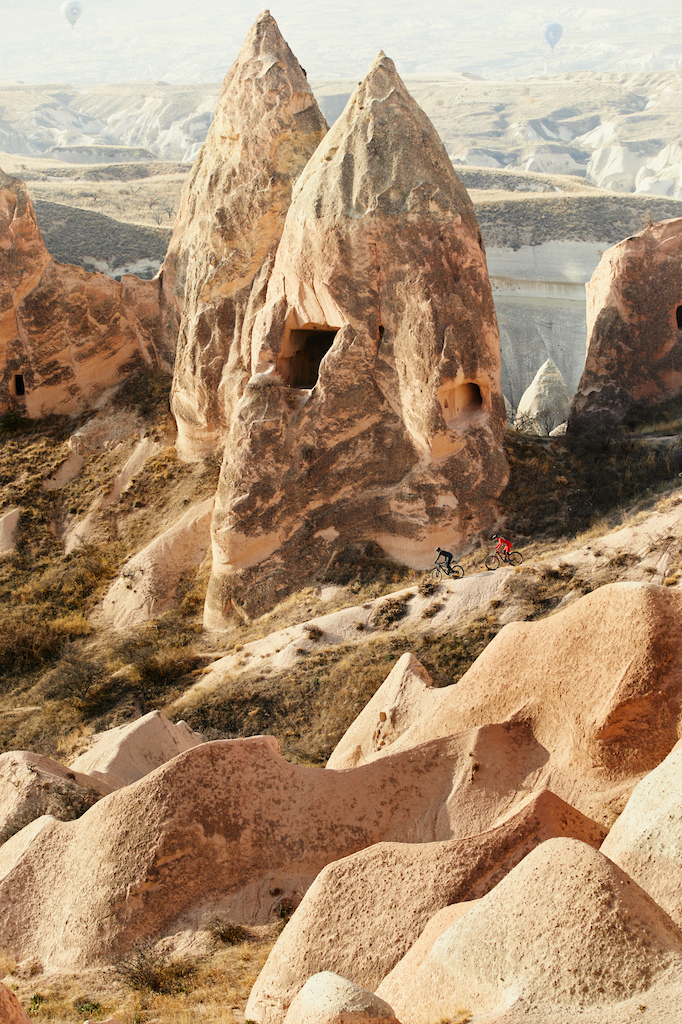 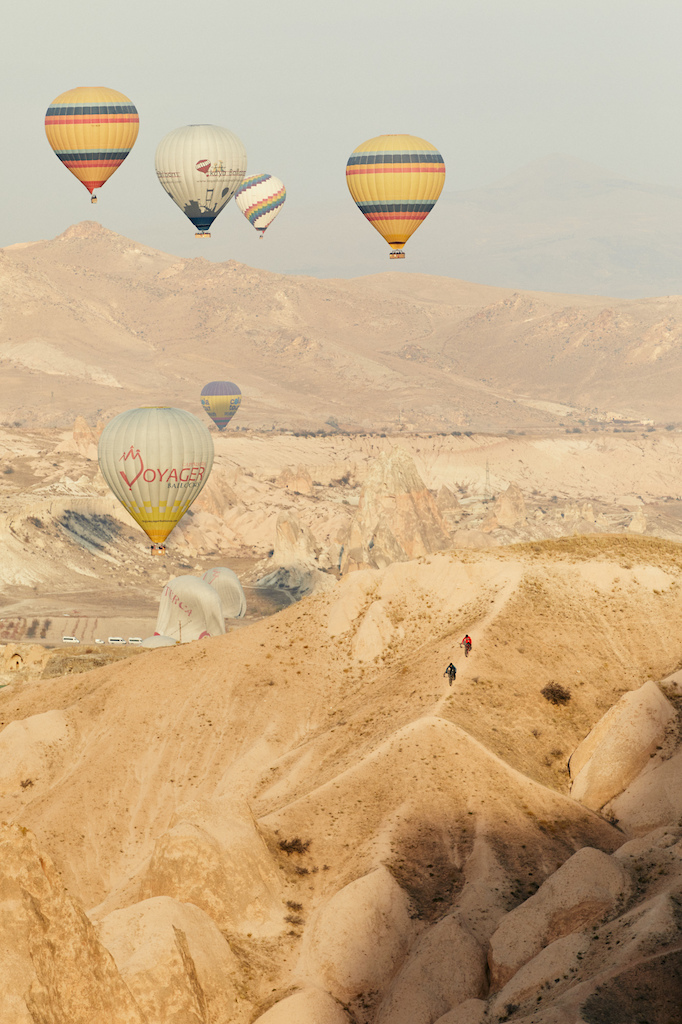 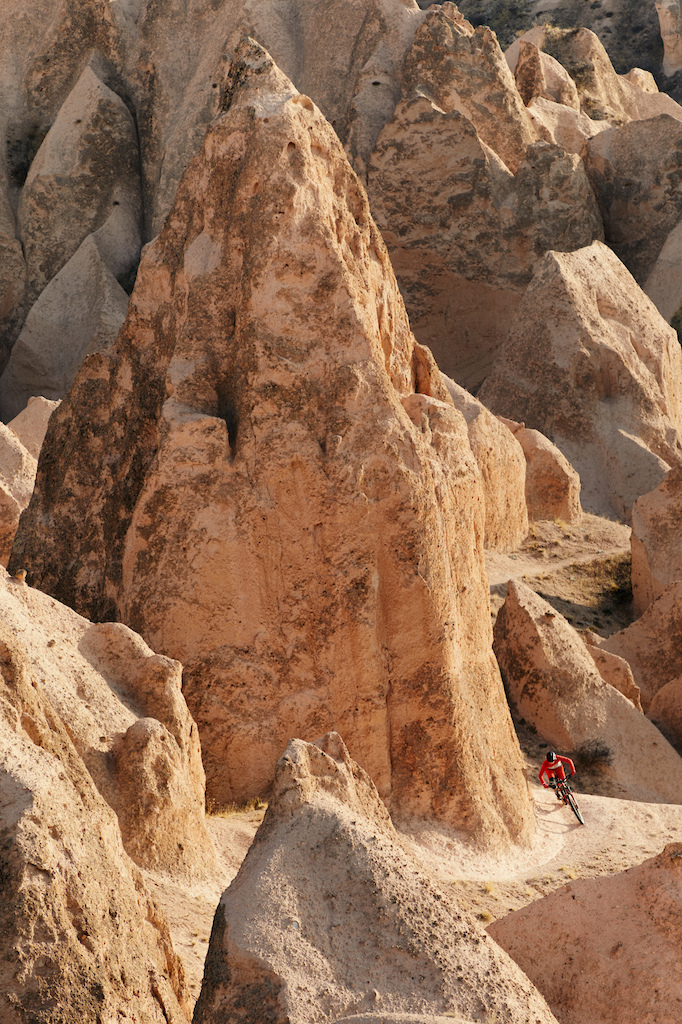 The Cappadocia region of Turkey is the most popular location in the world for hot air ballooning. Last year, over half of the world’s balloon trips took place in the region, with almost half a million people taking to the skies. It’s also one of the few places in the world you can balloon almost all year round. Trips run in boiling hot summers and snowy winters – and the landscape looks incredible in both.While on a flight, you won’t just see a few balloons, the sky will be filled with around 100 balloons of differing colours and designs. Every day is like a fiesta. 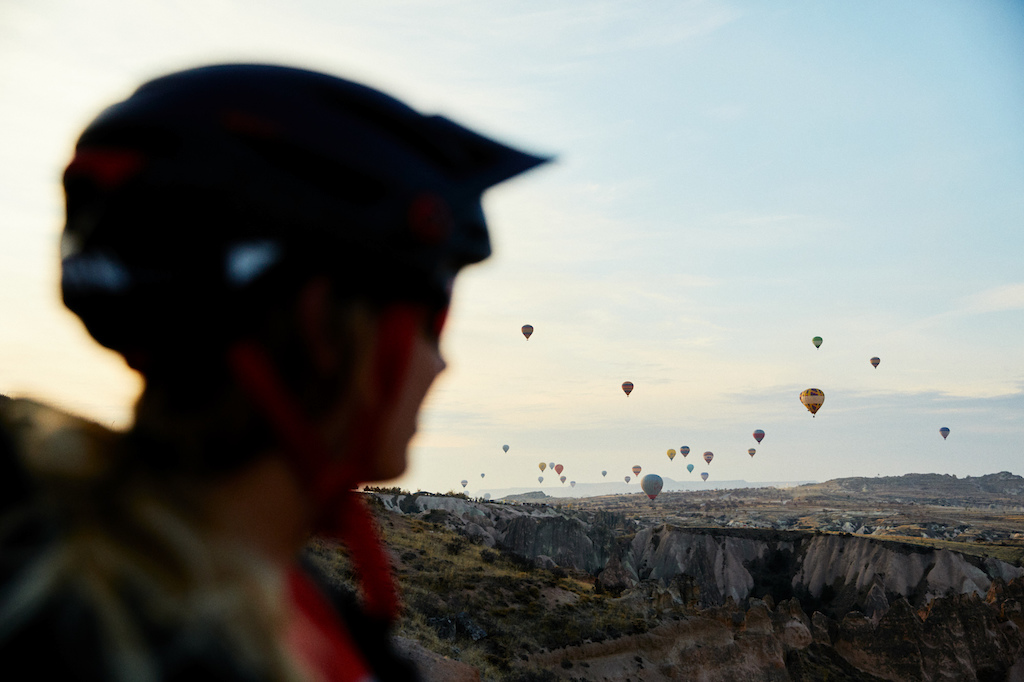 Sunrises are out of this world in Cappadocia. 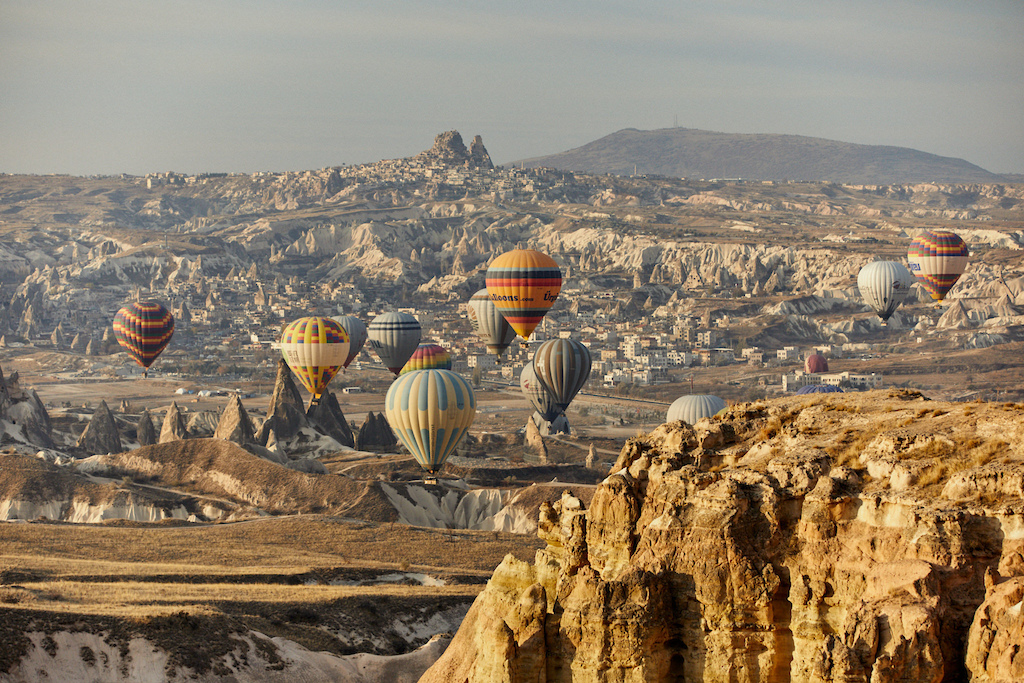 UNTIL NEXT TIME TURKEY
Every beautiful journey, dream, trip call it however you want it comes to an end once. We ended the journey with a last mini explore through rose valley, a great Turkish meal in the restaurant called 'Sultan Place' and some really good wine. A week of riding, exploring, learning all the way through Turkey/Cappadocia was one of the greatest adventures I've ever witnessed and made some friends and memories for a lifetime. The Snowmads drove me to the nearest airport and saying good bye is always the hardest part and I usually drop a tear or two, this time I left with the biggest grin on my face I've ever had. Fabian continued his journey to Teheran/Iran, with everyone else along. He has been talking about staying in Iran for a year ever since and is documenting his life there until this years November, skiing some crazy lines, riding some nice trails and exploring this extraordinary country. 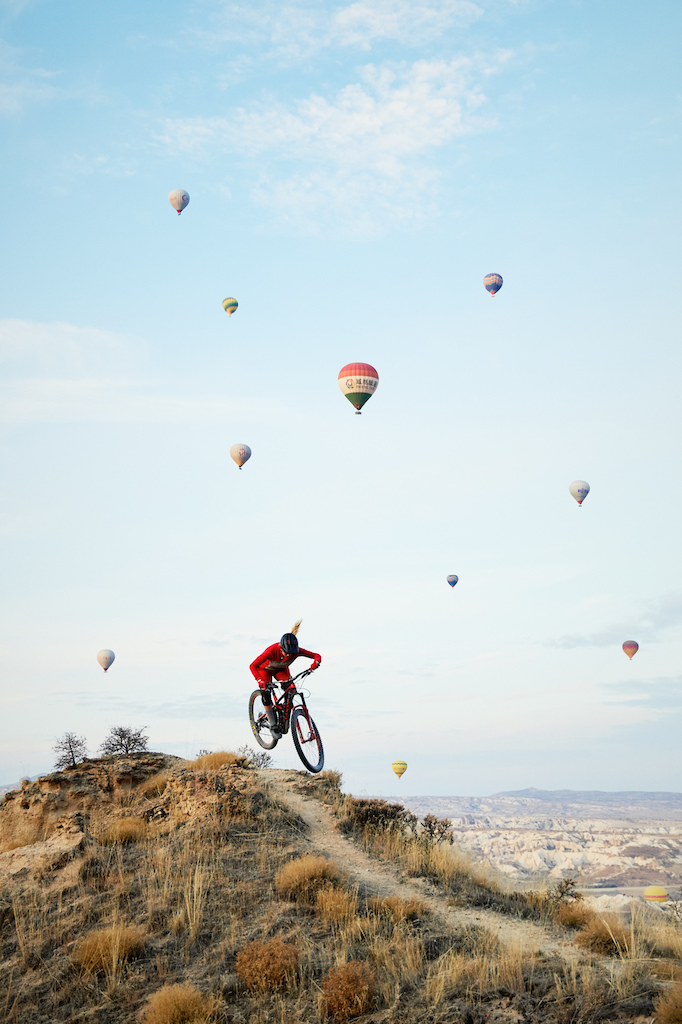 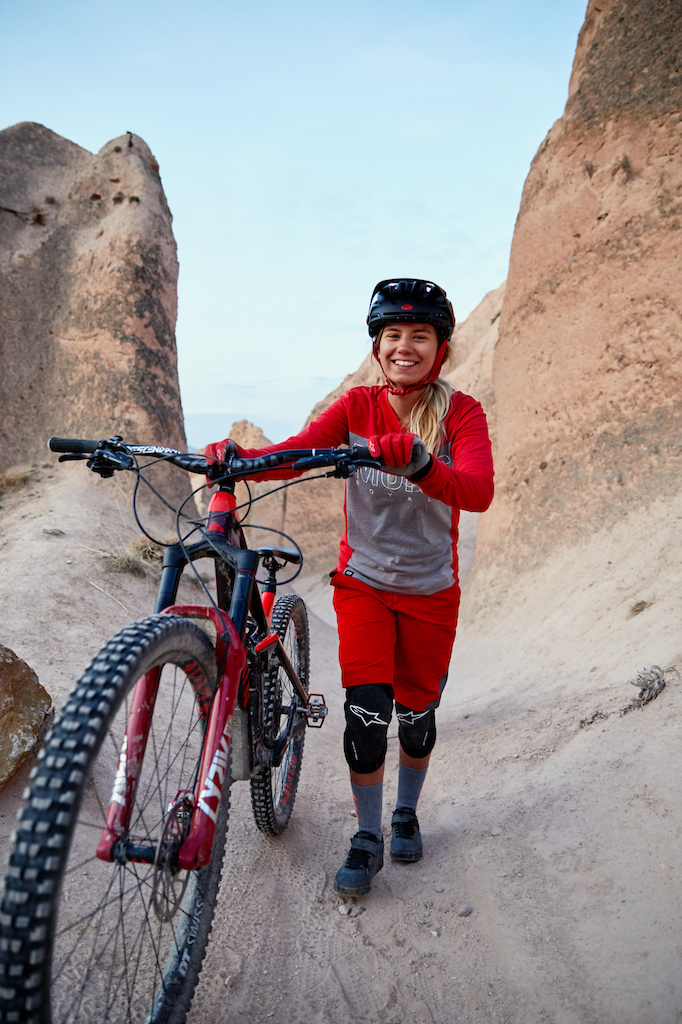 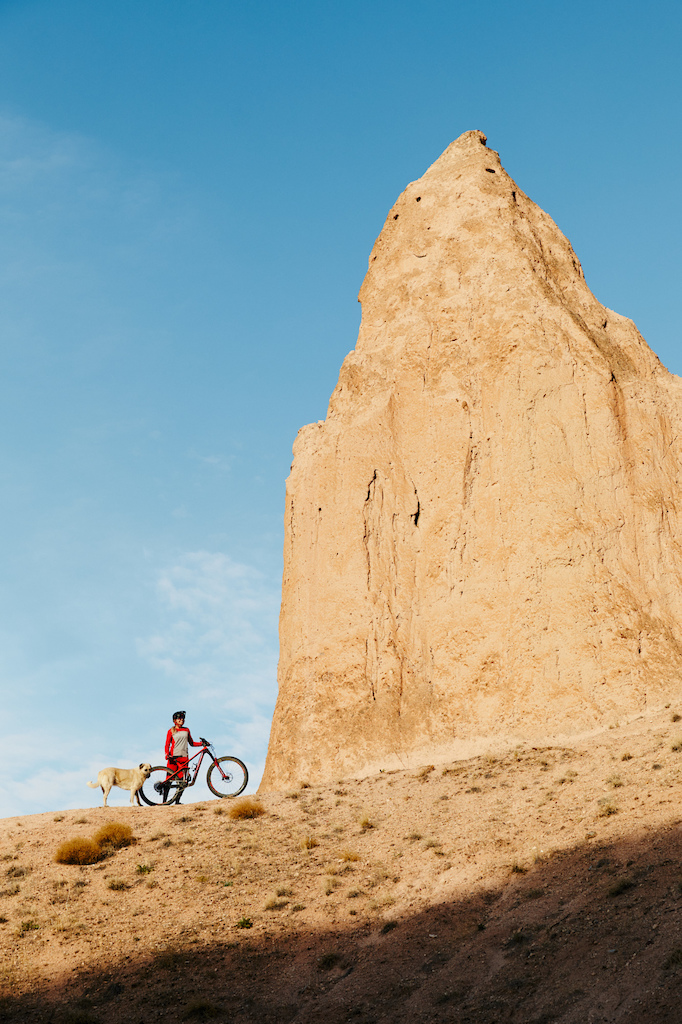 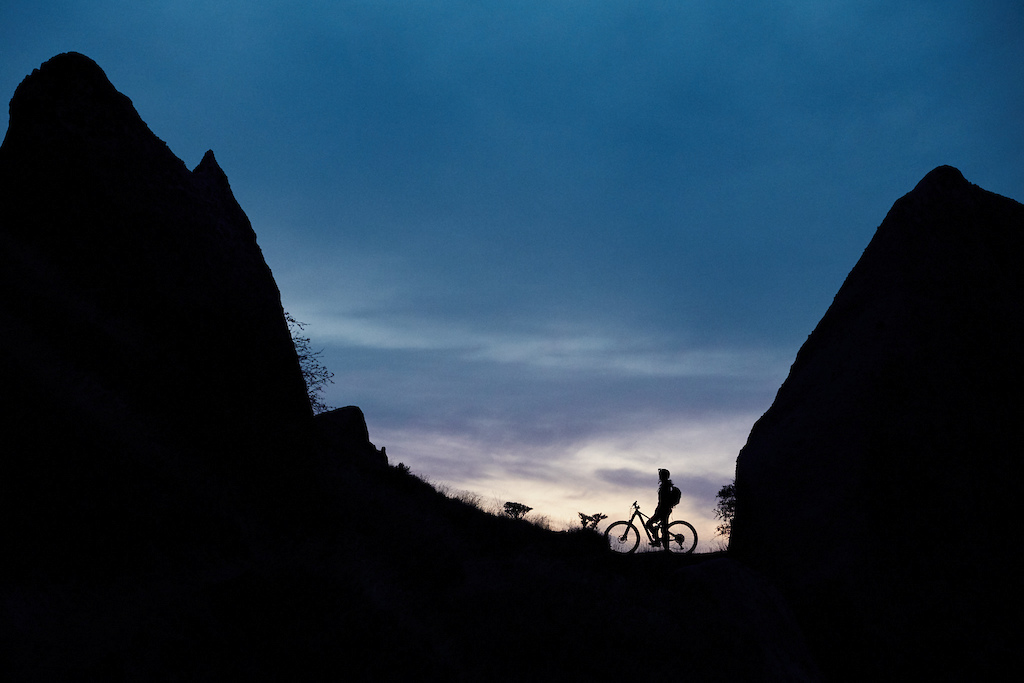 SEE YOU OUT THERE!

Srnunez (Jul 4, 2020 at 13:49)
Turkey is killing the Kurds! Genocide... please dont go to Turkey. Sorry for the turks, I have great friends among them is the goverment.

chickenlassi (Jul 4, 2020 at 10:14)
I loved Turkey when I was there. I learned the numbers 1 to 6 from playing backgammon with the locals drinking Alma chai. The best number in any language is 81 in Turkish. Seksen bir, which when pronounced with an English accent sounds like sex and beer. In Cappadocia I stayed in the Ufuk pension. When I was there I never felt threatened nothing got stolen I would definitely take my kids there. To ride bikes would be next level. Great story and I would love to be on the road again.

mudmonster666 (Jul 5, 2020 at 11:04)
I'll be boycotting Turkey until it's no longer a dictatorship and no longer exterminating Kurds.

EricHarger (Jul 6, 2020 at 0:59)
Turkey has also yet to acknowledge the Armenian Genocide. Please add that to your list of reasons.

mudmonster666 (Jul 6, 2020 at 15:04)
@EricHarger: I started a list and then just decided to go short and to the point. Could go with the execution of Kurdish politicians (Hevrin Khalaf). The use of extreme Jihadi mercenaries including and also collusion with ISIS. The expulsion of Kurds from their land. The imprisoning of journalists and politicians they don't agree with.

fattyheadshok (Jul 4, 2020 at 17:39)
These photos are amazing. My only enduring impression of Turkey is probably a bit stilted. It’s based on a novel I read when I was around 12 called The Midnight Express. It’s about this poor young American kid who gets busted in Turkey with some fine Turkish hashish that he wants to bring home. He gets stuck in this horrid Turkish prison and is subjected to unbelievable sadistic cruelty simply for having a small brick of hash. Ever since reading that I viewed Turkey as one of those places never to visit. This article has made me reconsider.

Levty (Jul 4, 2020 at 21:12)
Nice! Nice trip, love the pictures. Such a flash back. We also travelled to Turkey for a few weeks and stayed around Cappadocia a couple of days. Wouldn't say that it is a "Unknown Enduro Paradise", some episodes from Kranked 3 have been filmed there, too. (if anybody at all still knows about this film series, [New World Disorder?] ).
Our footage: v2.trailhunter.de/2012/11/21/roadtrip-turkei-ein-bikebergsteigerabenteuer

Again, loved your pictures. Same here: One day I hope to be back again to ride this dusty paradise! Thanks a lot for this article.

2d-cutout (Jul 5, 2020 at 1:52)
Some of the best singletrack I've ever ridden was in Cappadocia. Hard work to get to in the summer (40 celcius or so), but awesome fun! And yes, Turkish people are incredibly friendly.

I lived in Turkey for two summers and have ridden (and guided) in a few places there, Cappadocia was my favourite, I've since lived in Whistler, Revelstoke (BC) and Nelson (NZ).

mountainbikerfisher (Jul 6, 2020 at 11:18)
Half-Turk Half Canadian here. Lived in Turkey, lived in Canada. Every government has its issues (including Canada's). I'll be the first to admin that the current government is not helping it's own people and is corrupt, but as far as the people in the country, the everyday citizen, the culture, the history, the adventure - Turkey is a top notch place to be and it's a shame its reputation is being dragged through the mud.
All you keyboard warriors throwing shade - visit there first, before you type from afar with stuff you know nothing about.

baybarsyontar (Jul 13, 2020 at 2:31)
To the all people saying the Turkish government is killing the Kurd's, there are nearly 30 million Kurd's that is living peacefully in Turkey. The ones who are getting killed is the terrorists that try to kill the innocent people across the Turkey. By suicide bombing or other ways.

Kknuth (Jul 15, 2020 at 14:46)
Rode this zone with Bikinginturkey.com a few years ago. Did a several day point to point supported MTB trip. Stayed in amazing places each day and had the best food each meal. Georme town was like a dream. Spend a few extra days there. Felt 100% safe to entire time

rarerider (Jul 4, 2020 at 13:24)
Cappadocia is amazing, and the Turks are an extremely hospitable and welcoming bunch. Highly recommended!