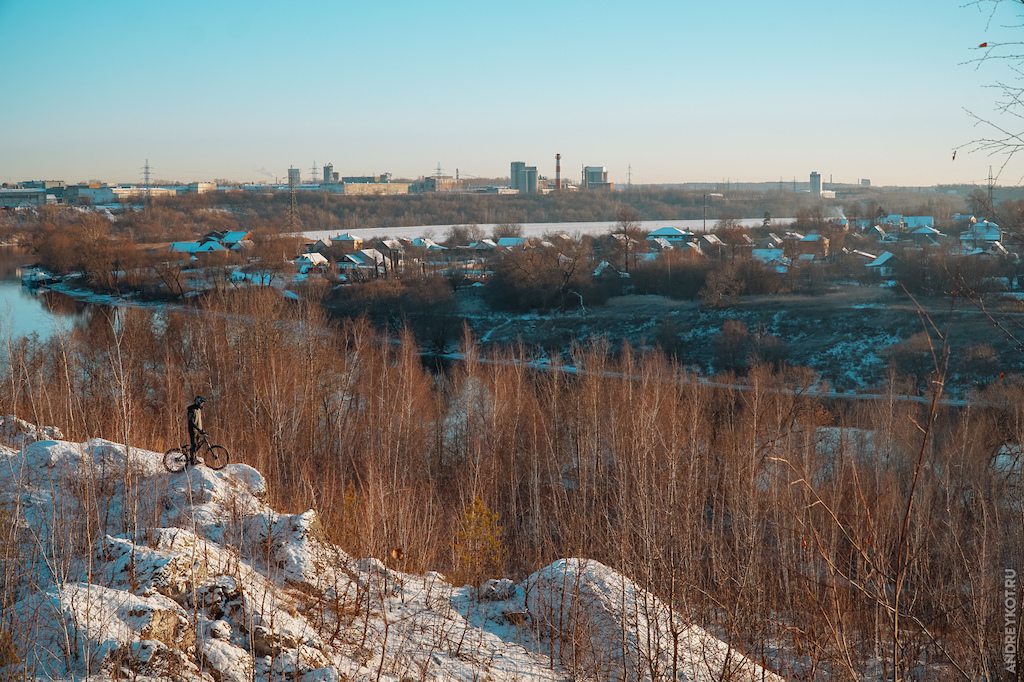 Hello Pinkbike from Russia! My name is Daniel, and I would like to tell you how the Andrey Kot and I closed this season.

Andrey Kot and I had been willing to travel to Kirill Benderoni’s home spot to take some pictures for a long time but the weather shelved our plans. Nevertheless, November 30th was a clear windless day and we decided not to miss such an occasion. 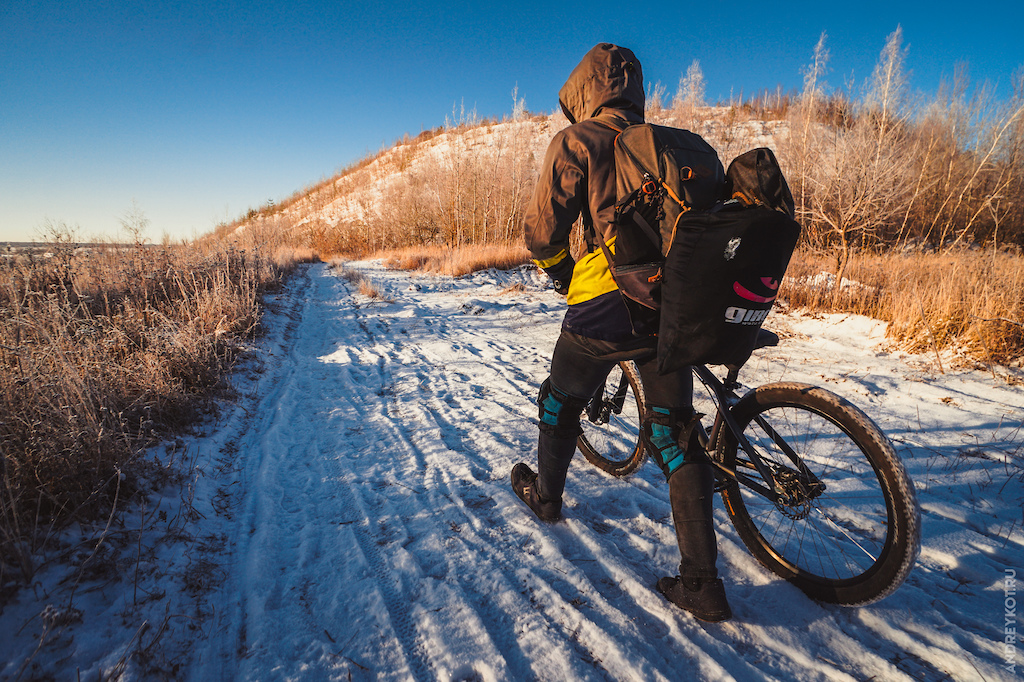 Honestly, I am not a huge fan of winter outdoors riding, but it seemed to be the only day without gusts of wind. At this point you may be wondering why I am so hostile to the wind. Well, wait and see. 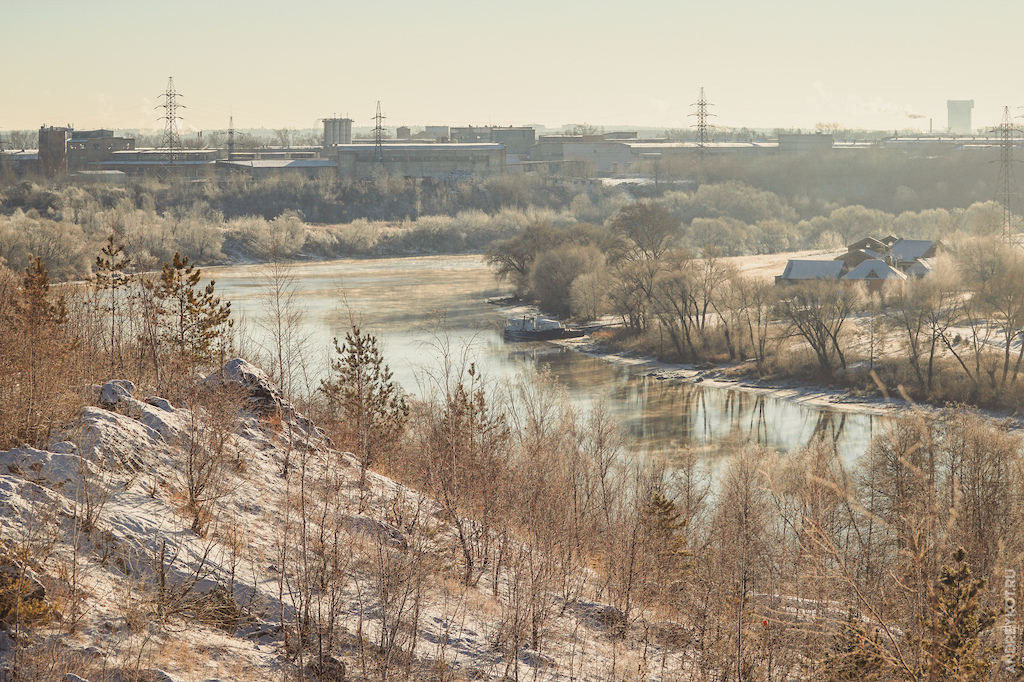 Having reached the spot, we made a fire so as to not get frozen to death. Away from any heat source in the middle of a forest, a bonfire becomes literally a source of life. Cooked on an open fire, food has a special flavor. There are three things you can watch forever... 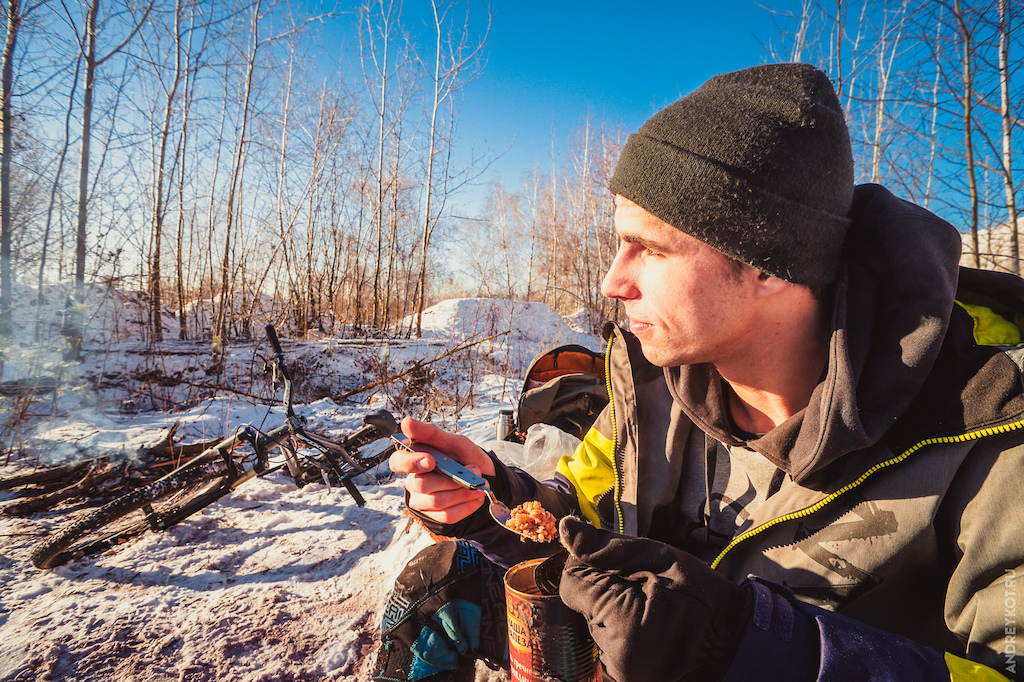 Anywhere, where was I? We came there for a reason.

Let me give you a brief tour of the tracks. There aren’t many of them but they are all carefully designed. There are three tracks in total: "School" line, "Student" line and "Series". Also, there are two dirt jumps: the training one and the large one.

At first glance, it seems that everything here has been built by a professional construction team. These three lines are so impressive in size that they look more like hills and it is hard to believe that they all have been mostly handmade by a couple of people. Only the landing areas have been levelled out by an excavator.

Since we were short of time we decided to focus only on one slope.

The riders usually warm up on the training jump and I was no exception. 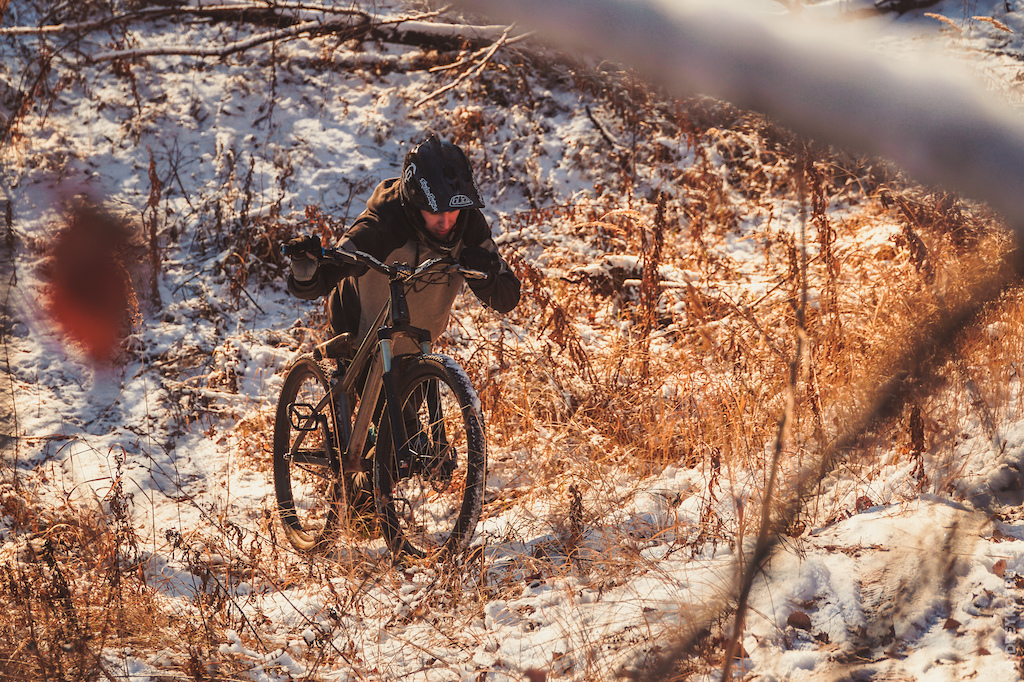 After that I decided to raise the stakes and climb higher. 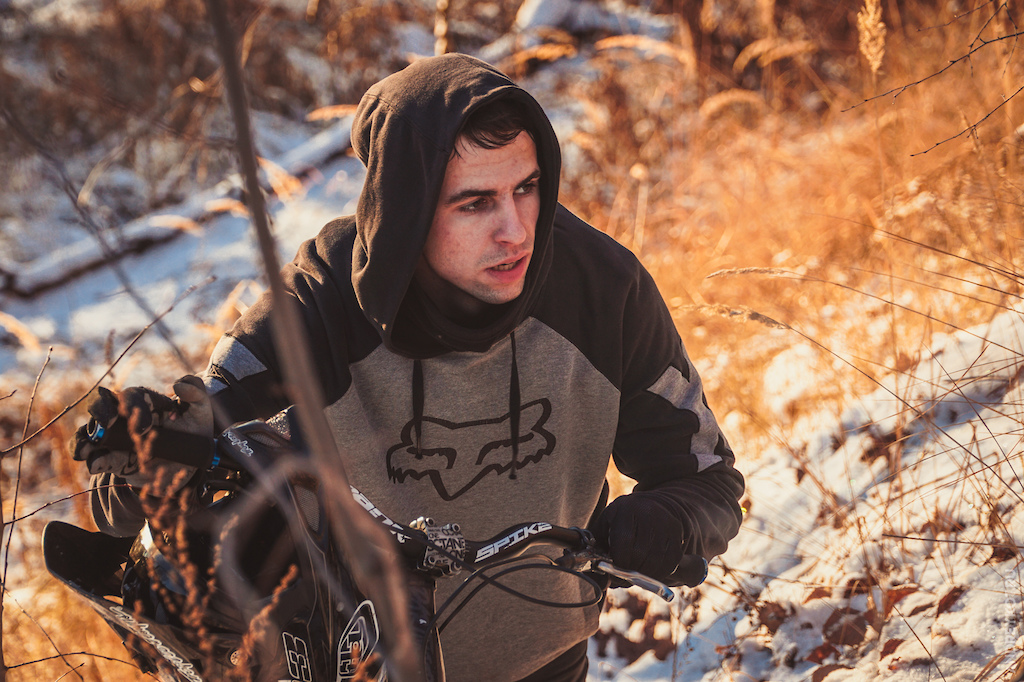 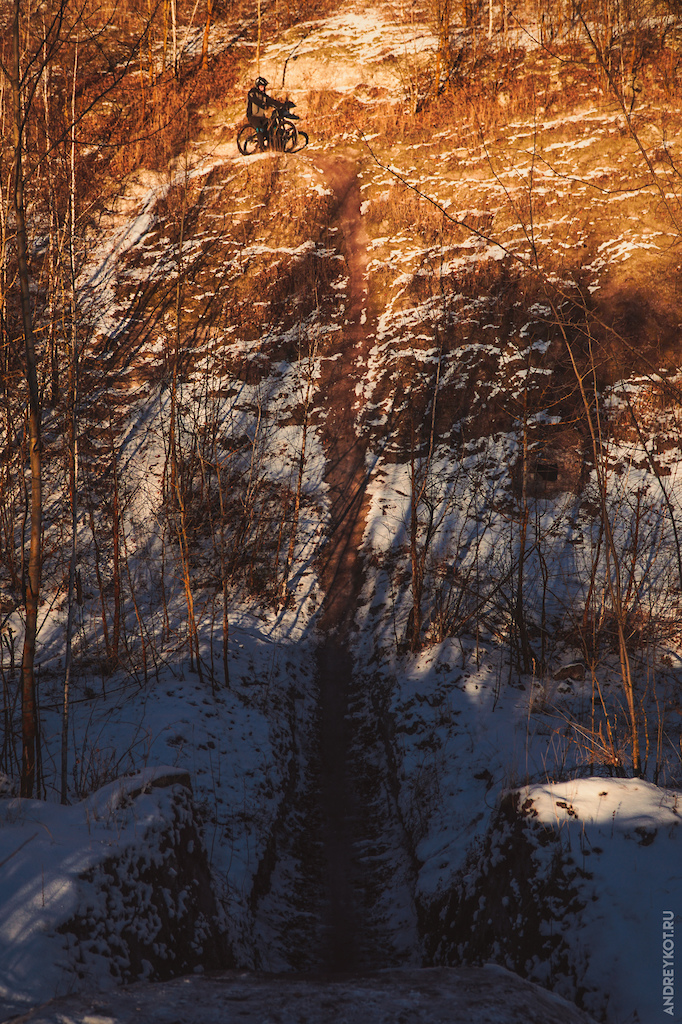 From the top of the hill the big dirt jump seems like a four-meter wall. 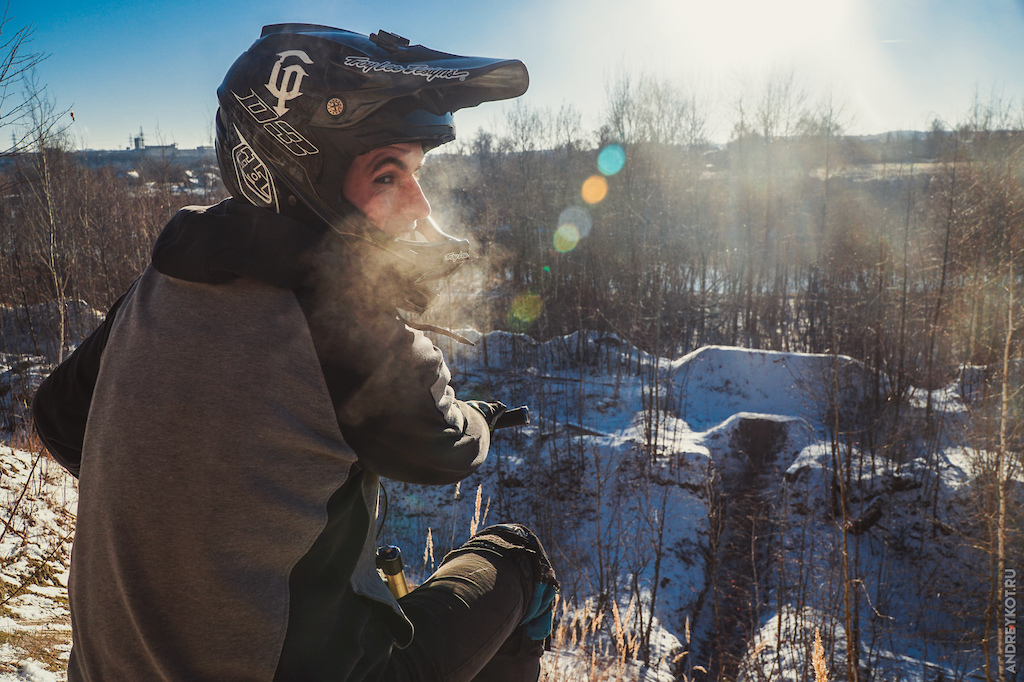 The first jump is always bound to make you feel uncomfortable but soon all your doubts fade away. 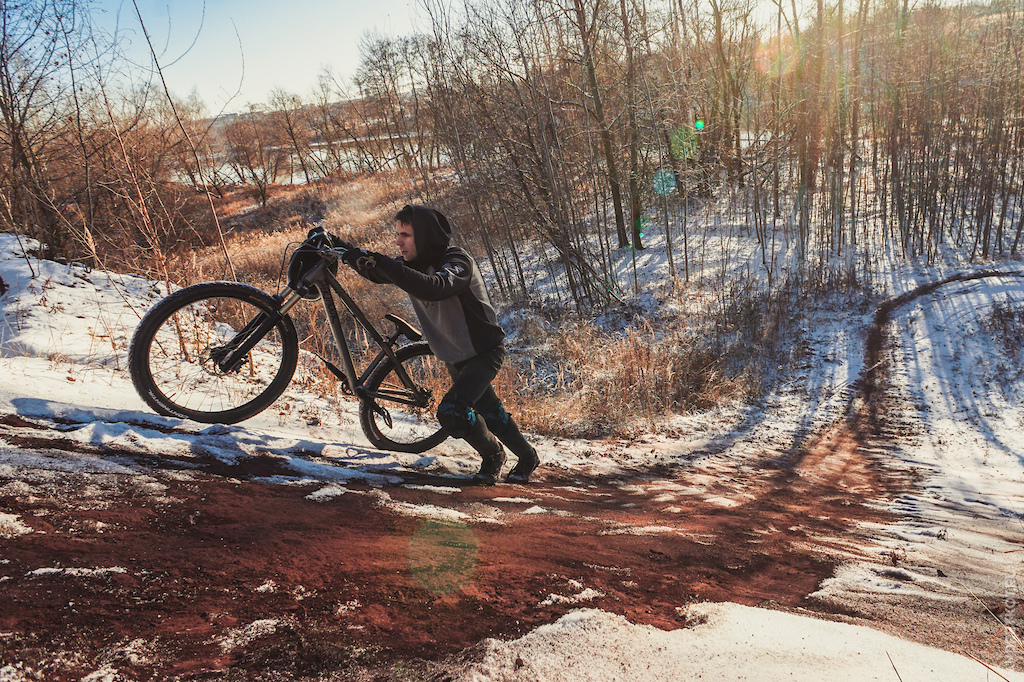 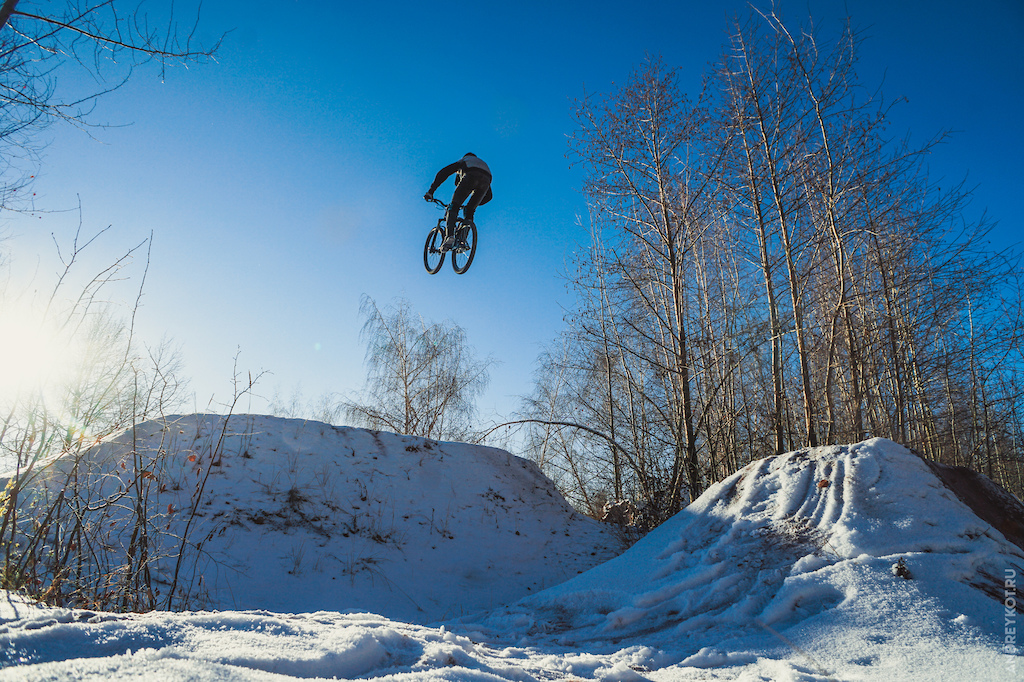 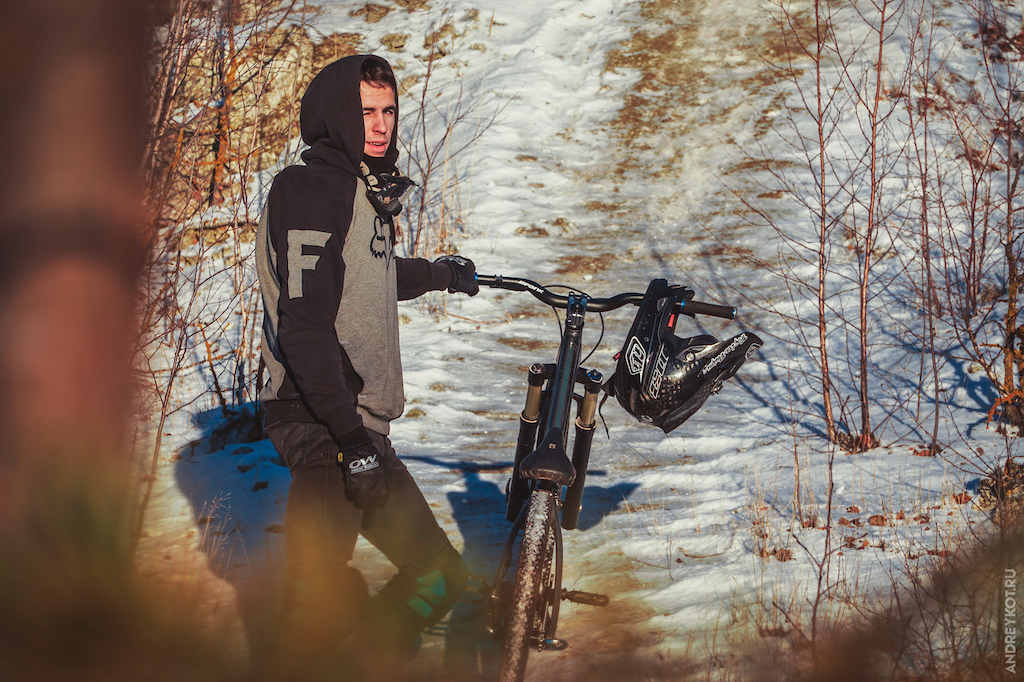 Finally, after 7 or 10 jumps, Kot and I went to the main goal of today's trip: 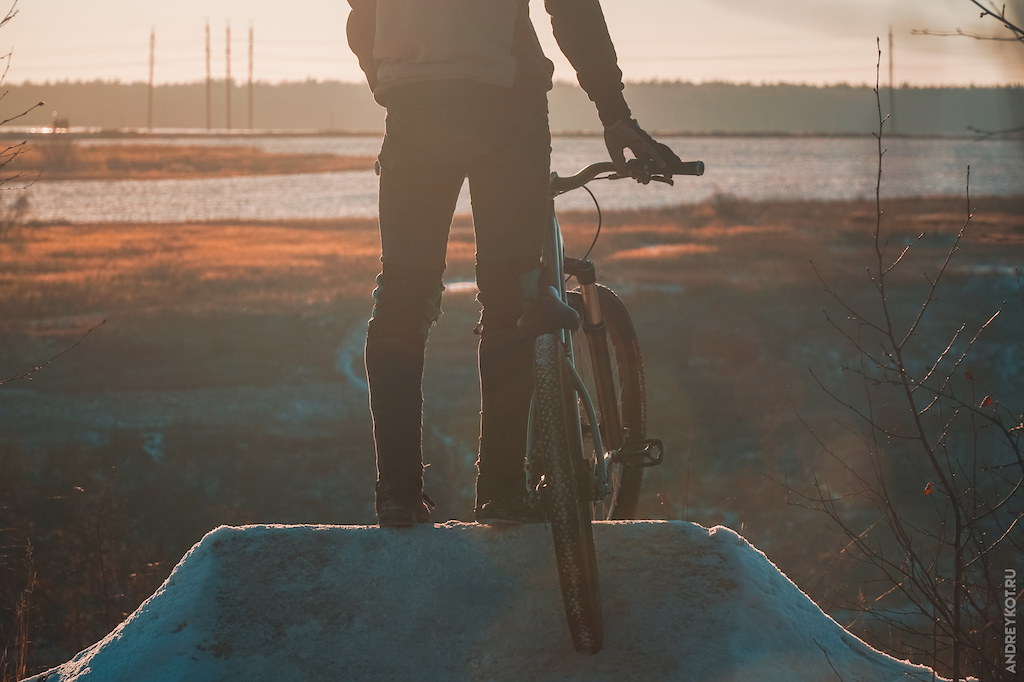 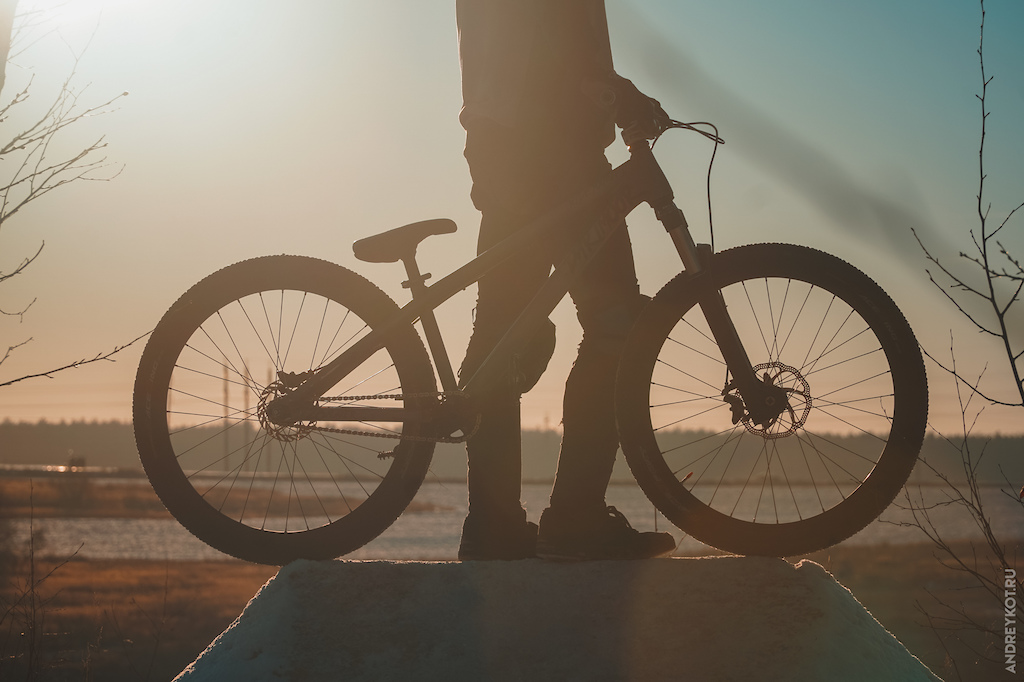 "Series" consists of only two jumps, but what jumps they are! First, there is a big stepdown with a long landing which is almost as long as the hill itself.

At the bottom, the landing transforms into the lip of a huge splitted gap. 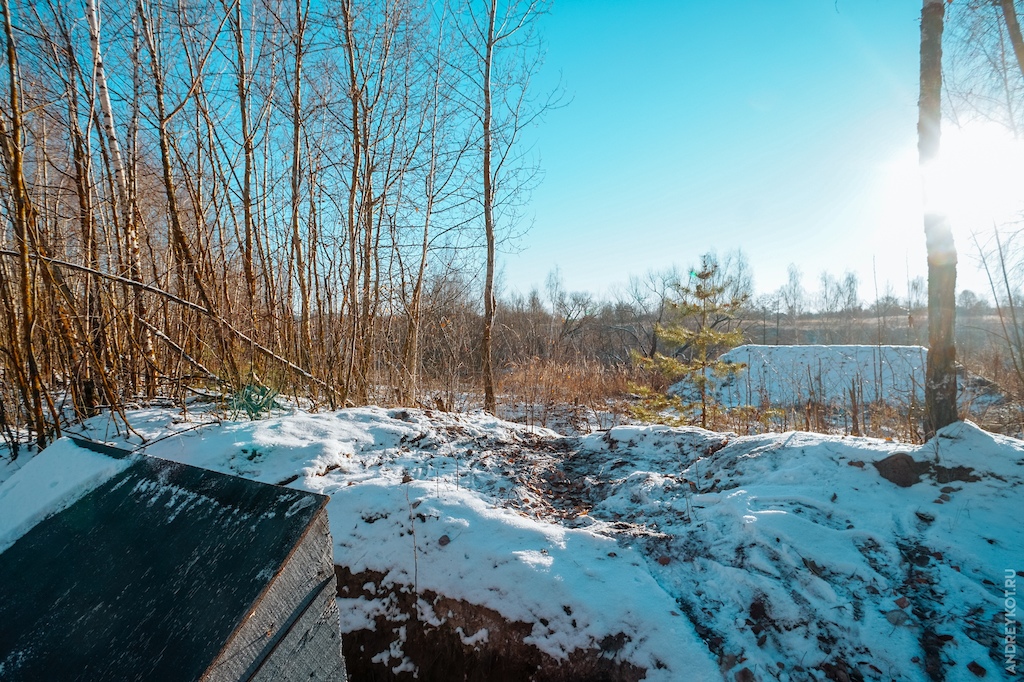 I would like to say thanks to Kirill Benderoni and Gera Saltykhin, who during the season prompted me, corrected my mistakes and helped to roll these jumps. Thank you guys for the opportunity to ride on this cool spot, for the advice throughout the season and of course for the pleasant company!

Without the support of these guys, I would hardly be able to jump here, especially on the hardtail. 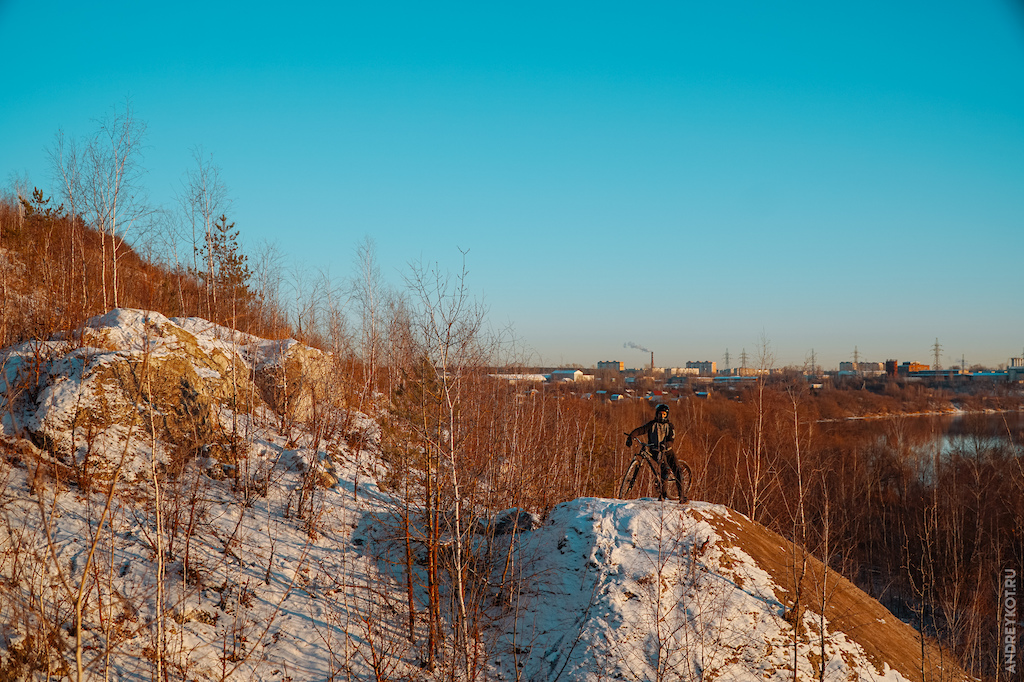 It was almost a month since I assembled my new freeride bike, so the time came to test it) 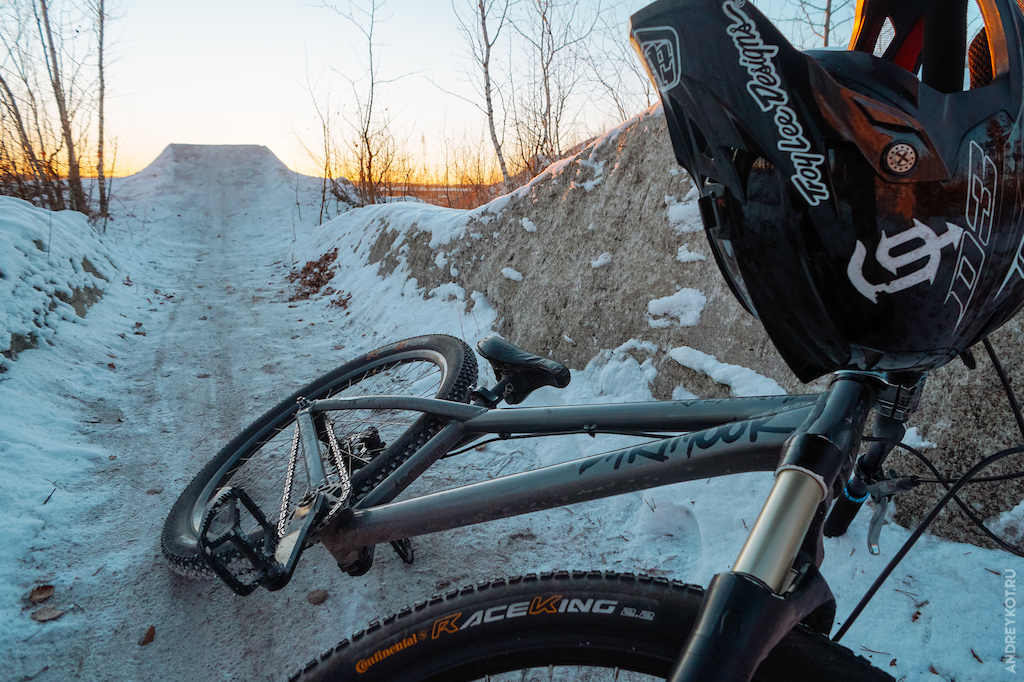 Kot went to the next mountain in search of good camera angles. Meantime, I went up to the starting shelf.

In theory, everything looks simple: ride down, pump the central bend and try to avoid gusts of wind, which can easily blow you off the trajectory and make the landing very hard. 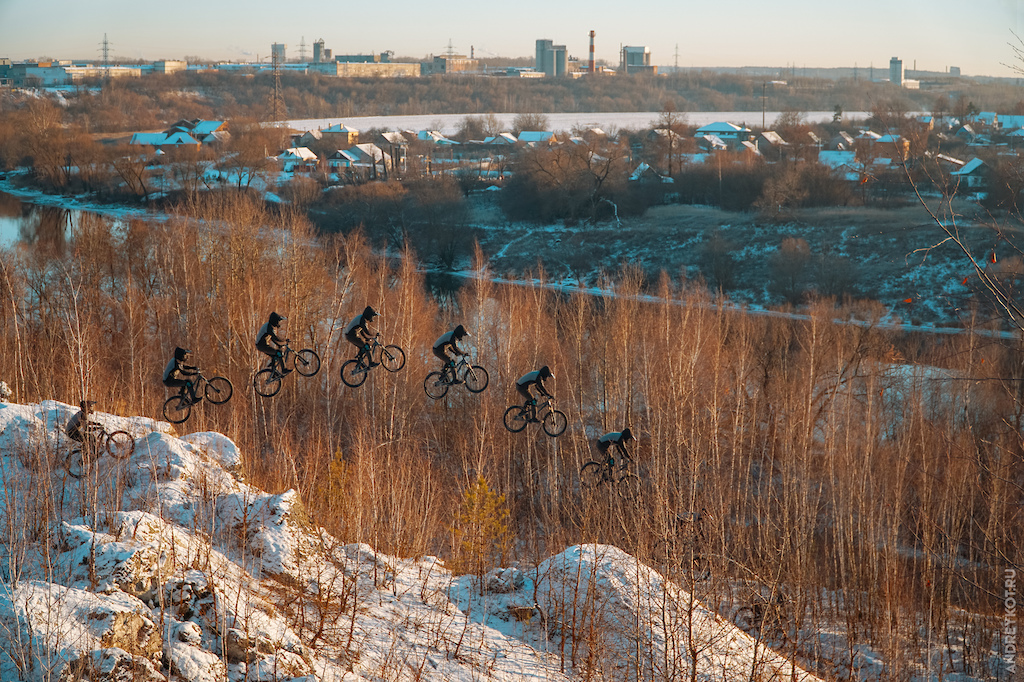 The first jump ended with an overflight: at the point of landing there were still about 2 meters under me, so I continued my landing approach much further than usual. By the way, the last jump ended in an undershot which is not something you would look forward to when on a hardtail. 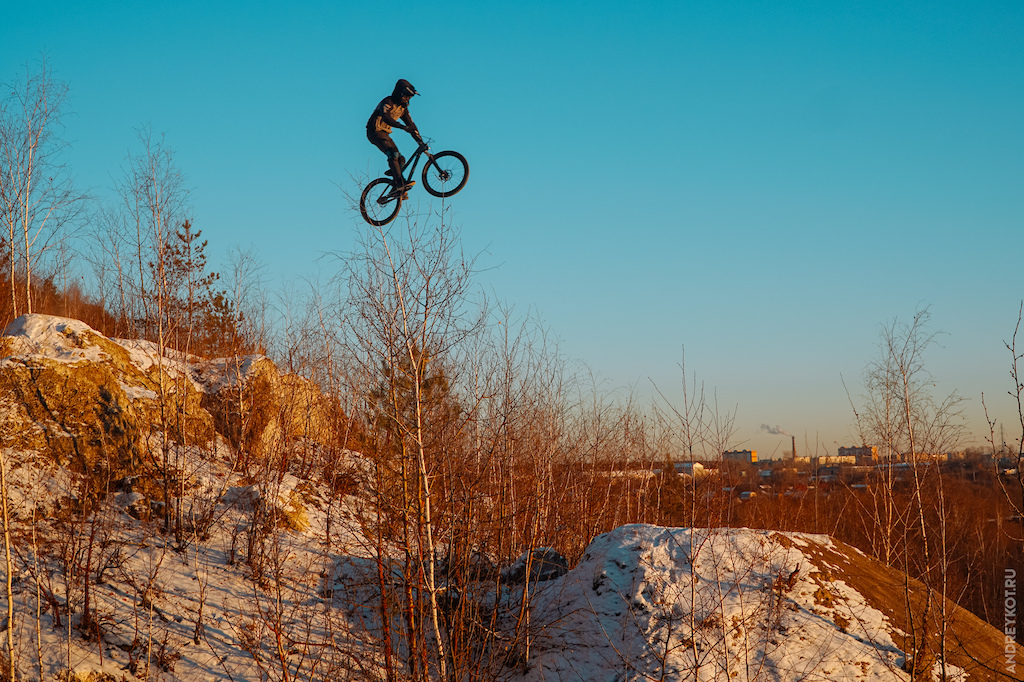 The first jump allowed me to select a suitable speed. The following jumps turned out more confident and I tried to perform my favorite trick "land on 2 wheels" and I have to say, a couple of times I succeeded in doing it. 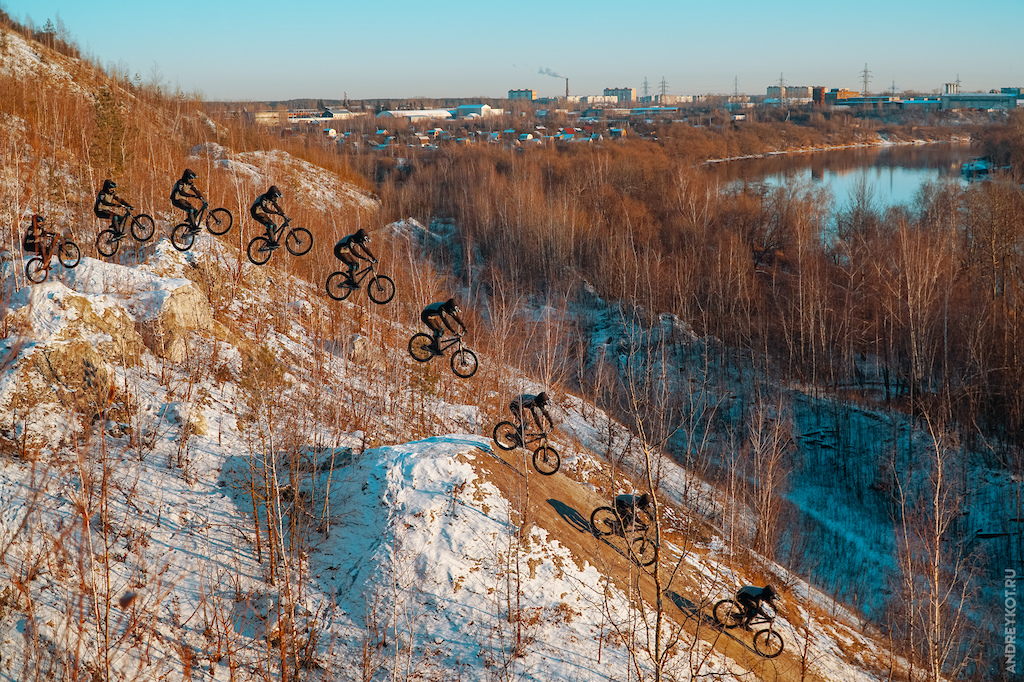 Watching Kot running along the slope and looking for a more interesting viewpoint than the previous ones, I was waiting for instructions and continued riding. 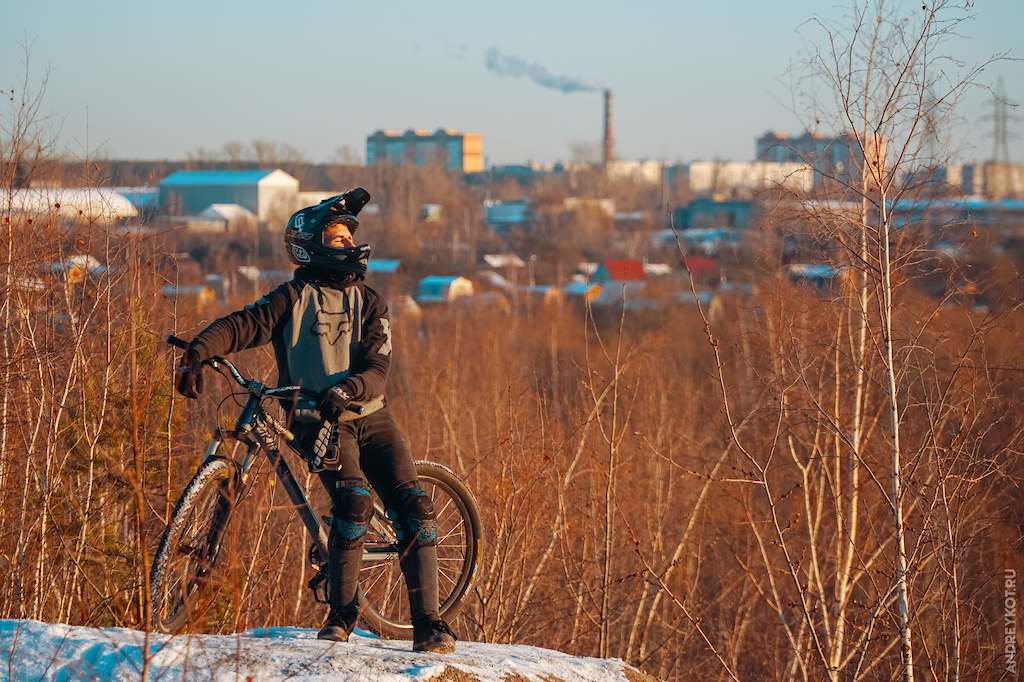 As a result, we managed to do around 10 jumps before the sunset - and we were completely exhausted by that time. By contrast, on ordinary days we tend to do two or three jumps, since it is really tiring 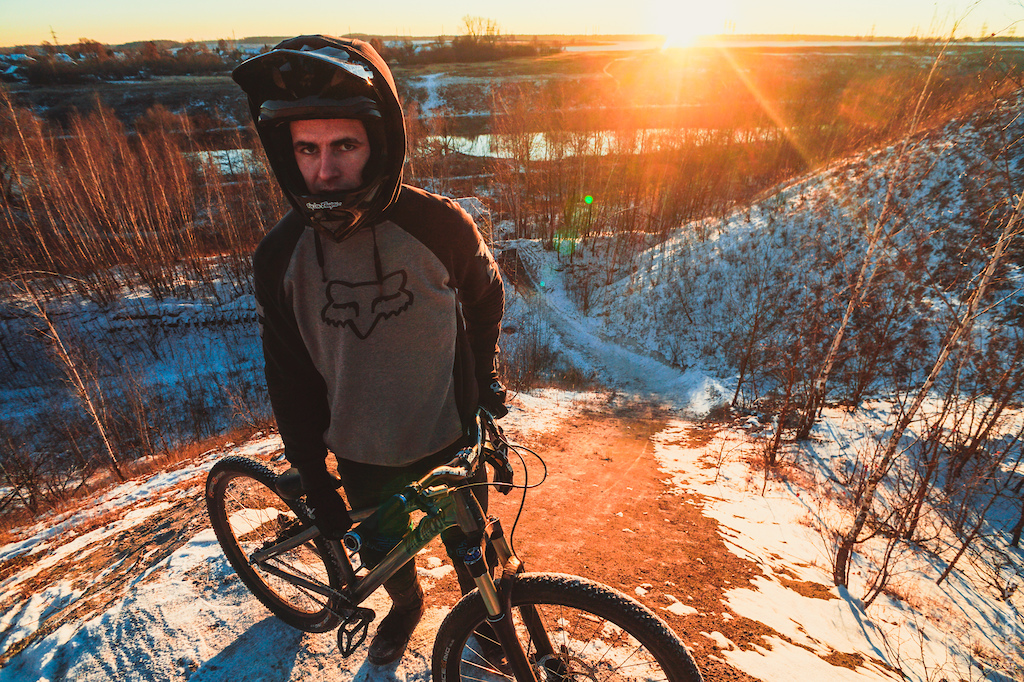 As I said above, the last jump ended with a notable flop on the bend of the landing. Luckily, this undershot went unnoticed for the bike. I hope someday I will be able to find a downhill bike to further progress to jump even bigger jumps. 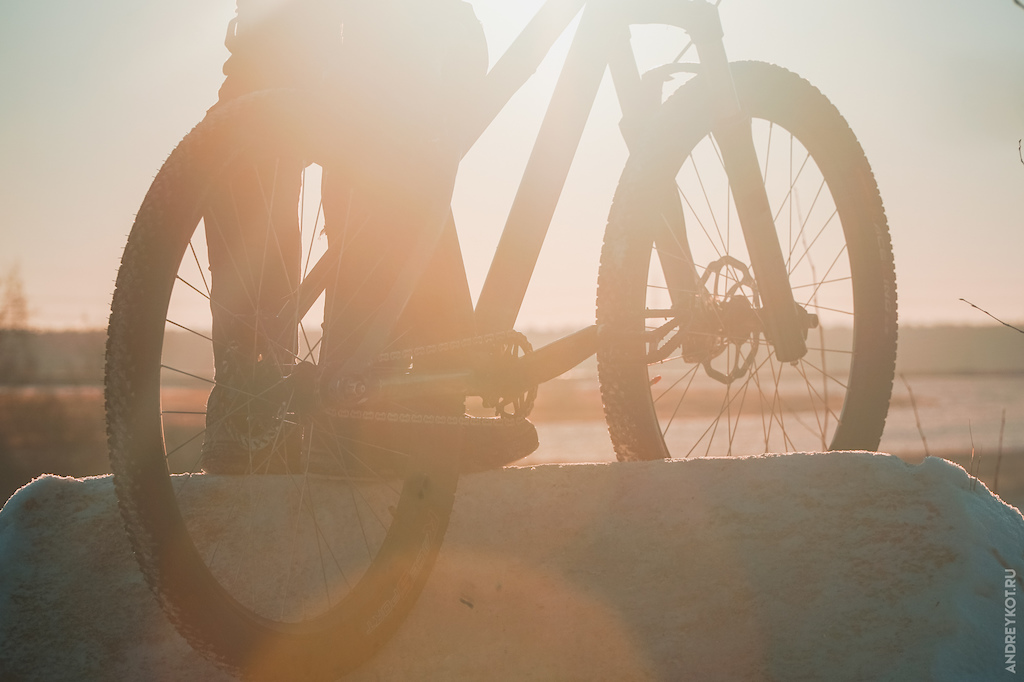 At the end of September Kirill Benderoni flew over the second jump of "Series" and was badly injured. I know that there is no news about Kirill for a long time. Guys, Kirill is recovering. Thanks to your support, Kirill underwent rehabilitation in a very good rehabilitation center 'Medsi' with knowledgeable specialists.

Several times we came to visit him, each time we were surprised at the speed of his recovery. Probably because Kiril is physically very strong. Most recently, after 2 months of rehabilitation in the center, he returned home. Now he continues to be treated, but closer to home. He has good progress now. Kirill walks well, as before falling, speaks well, and began to read little by little. Memories almost completely returned to him. Kirill does not stop and continues to do the exercises every day.

He sends his regards to everyone and thanks everyone for their help! It's too early to make predictions, but I hope we will see him on the bike again.

Also I would like to thank Andrey Kot for the wonderful photos and cool angles as well as for accompanying me to that wilderness at such early time and even by public transport. 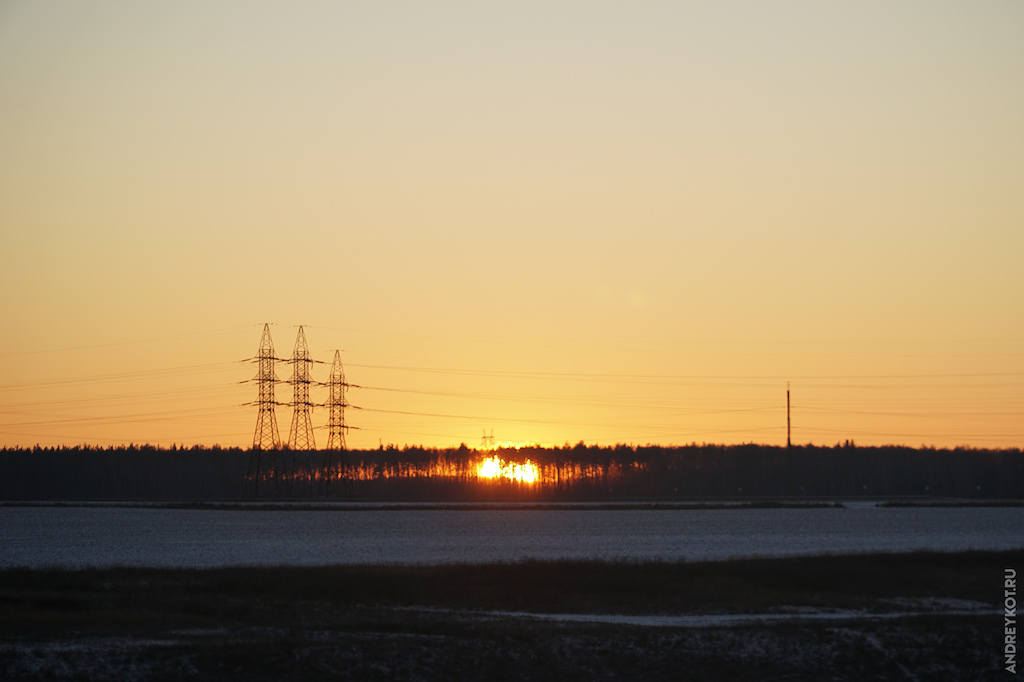 KavuRider (Dec 26, 2018 at 17:05)
Awesome write-up and great photos! You're a beast hitting those on a hardtail in the snow. Thank you so much for the update on Benderoni, I am sure everyone here at Pinkbike appreciates it. That guy is as tough as they come, amazing to hear how far he has progressed!

cunning-linguist (Dec 27, 2018 at 12:35)
Yes. Well Said. I massively appreciate the update & such great news. You too look to be a huge star in the making! It’s been some fair while since anyone attacked things like that on a hardtail! Well done! I enjoyed the write up too. Nicely done, happy new year & send Kirill all of our love and healing vibes when you see him next.

Somebody get this guy a DH bike and a trip to Utah!

jgottya1 (Dec 26, 2018 at 17:40)
Thank you for the update on Kirill glad he is doing better and staying strong! Great pictures and good way to end the year!! Happy new year!

CrashBandit (Dec 26, 2018 at 17:02)
Always a relief to hear someone with that traumatic of an injury recovering quality of life

headshot (Dec 27, 2018 at 1:37)
Good news on Benderoni. The initial report made his prospects sound very bleak

ORAORA (Dec 27, 2018 at 7:12)
Note the Neutrino Components crankset on the bike, CNCed in Yekaterinburg, Russia That Andrey is insane, sending that big on cranks that obviously could not be tested extensively by hundreds of athletes like ones made by big S-names. Props!

luckynugget (Dec 28, 2018 at 17:54)
Kirill Benderoni deserves the same recognition as other legends like Josh Bender, Paul Bas and wade simmons. One of mtb’s biggest hero’s

Jaguar83 (Dec 28, 2018 at 11:15)
Keep it up, Daniel, and thanks for sharing! You are awesome. And well wishes to Kirill in his continued recovery. Please continue to share pictures and stories.

Anyway, thank you Russia for "hacking" our election so that the wicked witch never won.

randybadger (Dec 27, 2018 at 4:31)
The difference between state and people is huge.
People generally speaking face to face are very nice.
Put them in a group with a cause or an ideal and you have a very different animal. That doesn’t just mean countries, it could be the type of bike you ride, the type of food you eat, the religion you practice even what you do with your rubbish.
We are singly the most incredible creatures on the planet but we can also be so incredibly hostile to different

humoroususername (Dec 27, 2018 at 5:56)
@randybadger: yup and everyone is susceptible to it. Which is what makes me worry when I hear do-gooders lecturing everyone else on how terrible they are. They are just unaware of how dangerous they can be when in a group.
Post a Comment