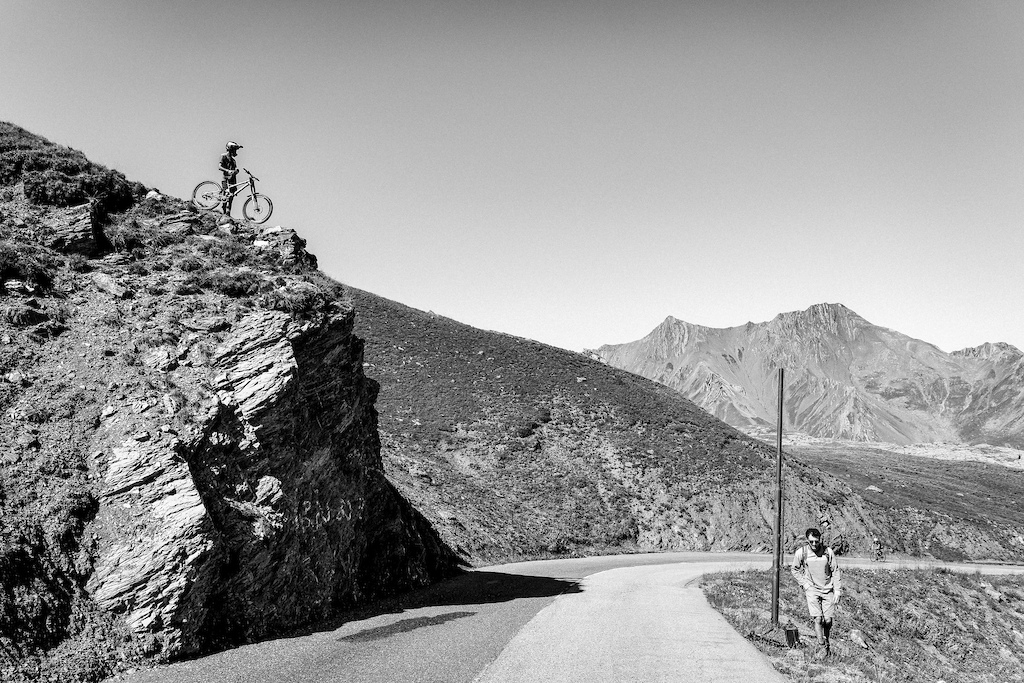 17 YEARS LATER
Olivier Cuvet & Maxime Peythieu on Dave Watson's Road Gap
It’s been a really long time that Olivier Cuvet and Maxime Peythieu wanted to clear Dave Watson's iconic road gap in Galibier, France. But they never talked about it to each other until one day at the end of August. Olivier was shooting « ARCADIA » with Max Rambaud, and while they stopped by a lake for a quick break, Maxime Peythieu and Alex Rouaud came by and chilled with them. While talking about the shooting, Peythieu talks about the road gap. As everything was already planned, Olivier told him to join them mid-September as he was gonna do it for the edit!

Max Peyhtieu knows the area really well as he is an ambassador for Serre Chevalier. He’s a really talented rider on every kind of bike but has only owned a DH bike for 2 years. He has known for a long time that he needs a DH to clear the jump and wanted to take his time feeling confident on his bike before sending it.

Olivier Cuvet has wanted to jump this cliff since he saw it for the first time, many years ago. He also knows the road gap really well as he’s been riding and skiing around the area for years. He tried to shoot it once in 2015, but the project was canceled as he was nervous about the landing when he came to build the jump. 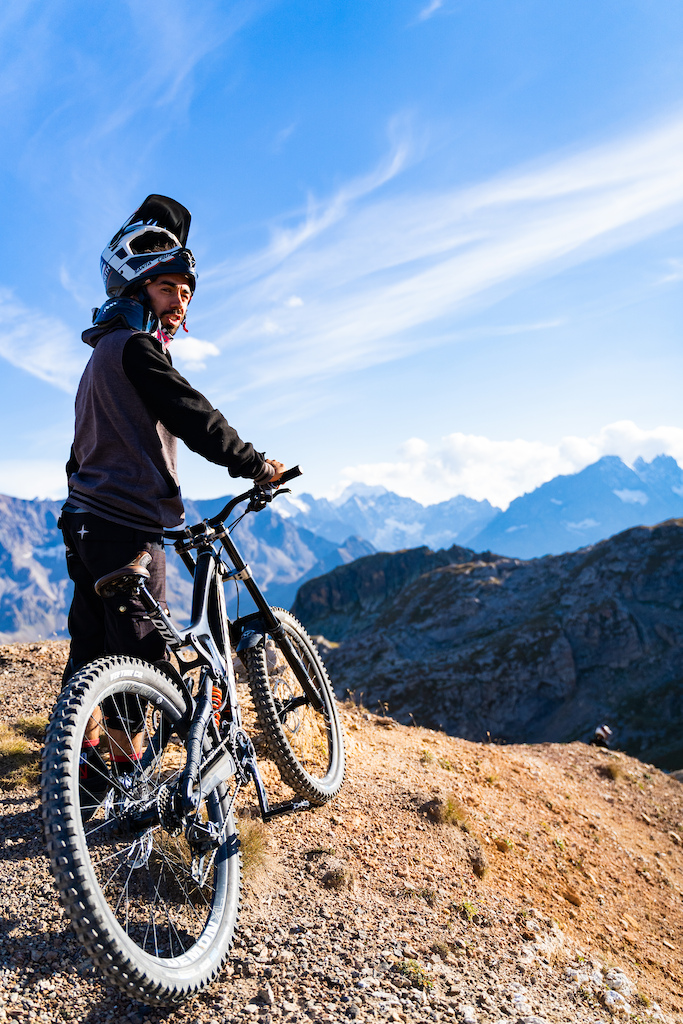 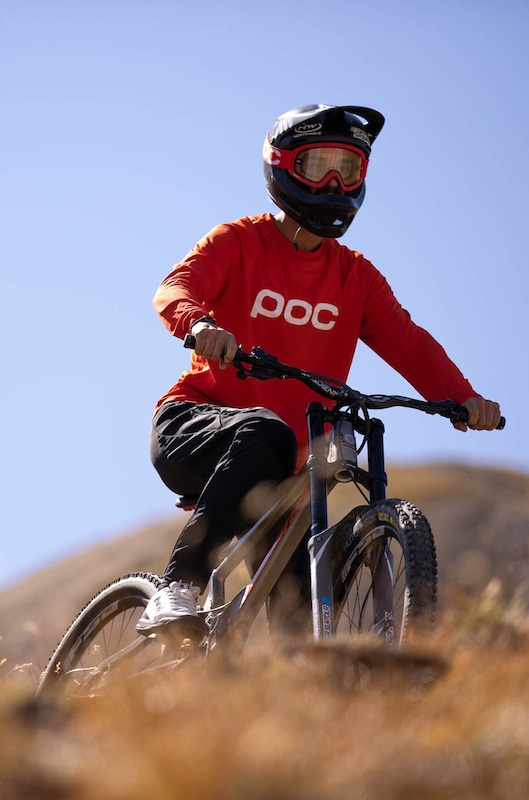 Maxime Peythieu with his Santa Cruz V10 / Olivier Cuvet with his Banshee Legend
Fast forward a few weeks and we’re up there, shoveling like maniacs for two days. The Tour de France is in the Alps at this stage, but they won’t take this route this year. So there is slightly less traffic than usual, and we’re way more free to dig. The digging process went very well as Oli and Max were assisted by Maxime Rambaud and Alex Rouaud.

Let’s talk about the jump. The landing is by the road, pretty steep and long. This is a good landing, except for the big pole at the right of it. The pole is by the road and is used to help snow plows when they have to clear the road. It’s not that dangerous but having it a bit further away would have been good too! The kicker was a tricky part, they had to build it on a narrow edge right over the road, by the cliff. The kicker was skinny, and not flat. They were really cautious when building it as they didn’t want to drop a rock on a car, about 10m under them. 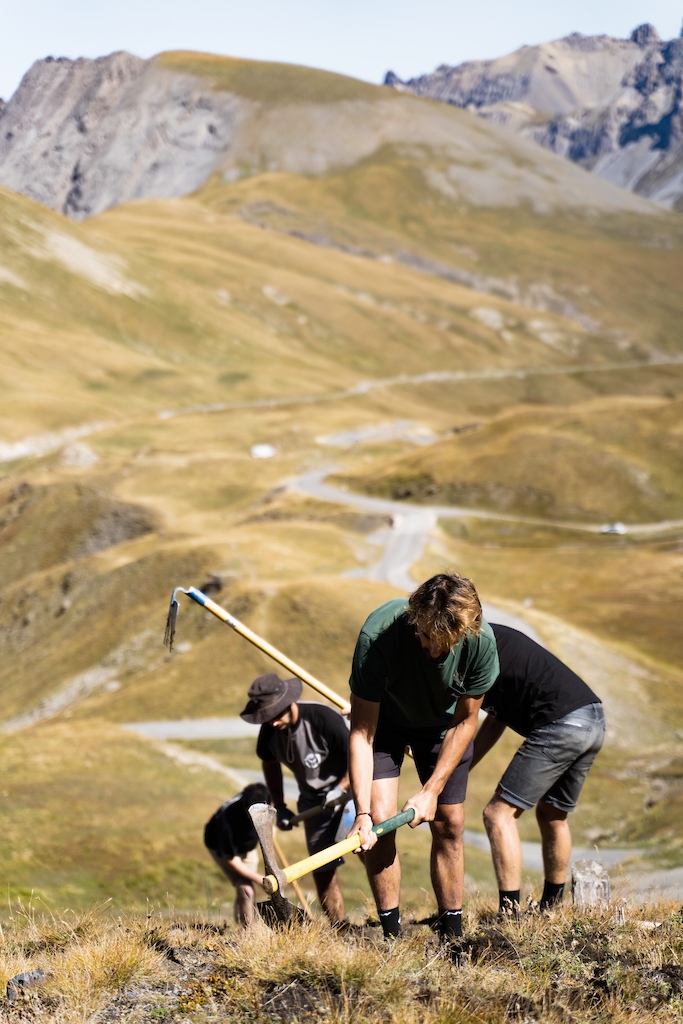 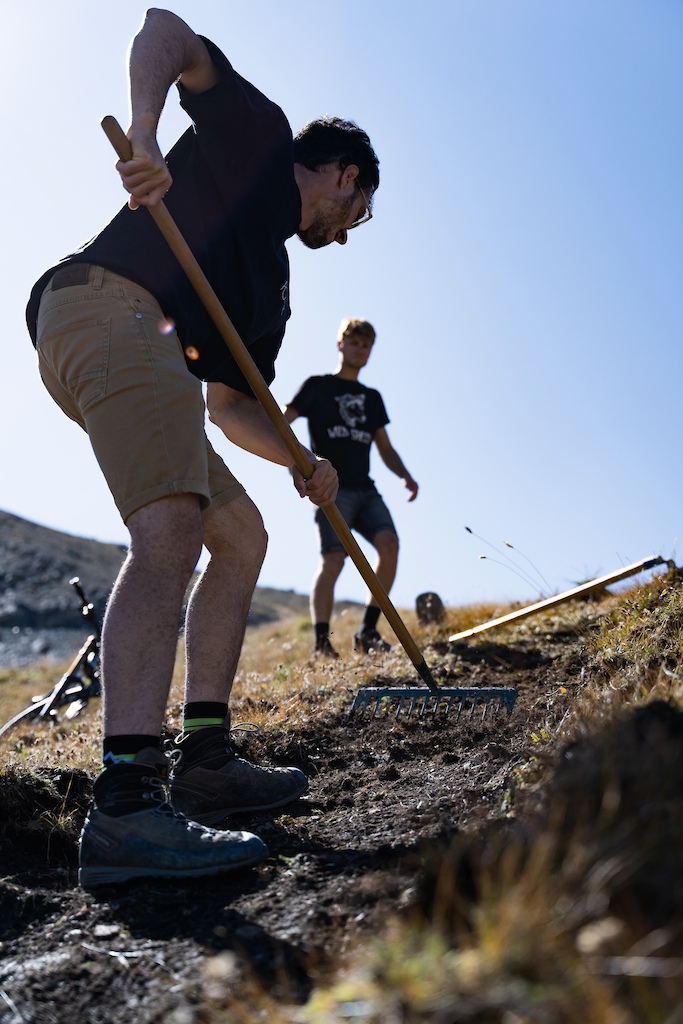 The building Team
Once everything is built and packed, by noon, we went for lunch and waited for Hoshi Yoshida & Will Camus to get the perfect shot. The lunch was pretty light and quick, as both Max and Oliv wanted to get to hitting the jump. You’ll assume that going for something that big must be nerve-racking. They were almost geared up when Hoshi came and then they went straight to the jump.

After a few speed checks on the landing to make sure there was enough space to brake, the speed checking for the take-off began. Max was a bit slower than Oli and a bit less confident too. After about 5 speed checks, Oli was sure of his speed. He told at the photographers « drop in ! » and dropped straight into the gap. He couldn’t have cleared the jump in a better way. There was a massive amount of air time, it felt like a minute. The roll out was perfect, and it was celebration time for him! He quickly came back to earth though as Max was still at the top. He runs up to him and told him about his thoughts after hitting the gap. Max waited for the wind to stop, and went for it the same way Oli did! 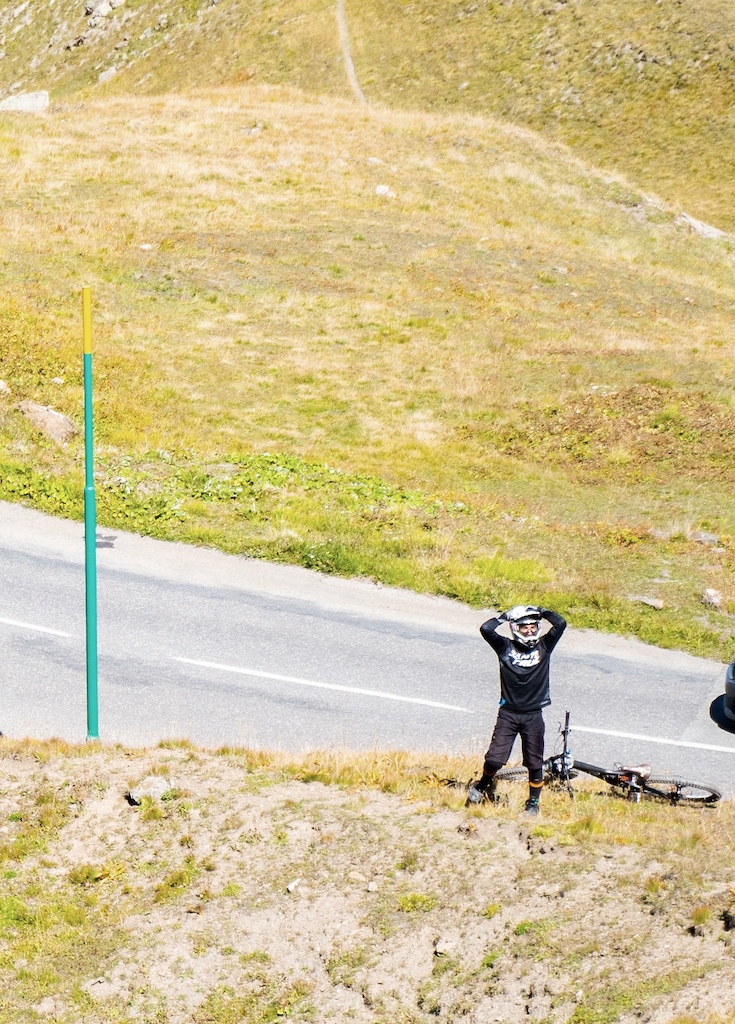 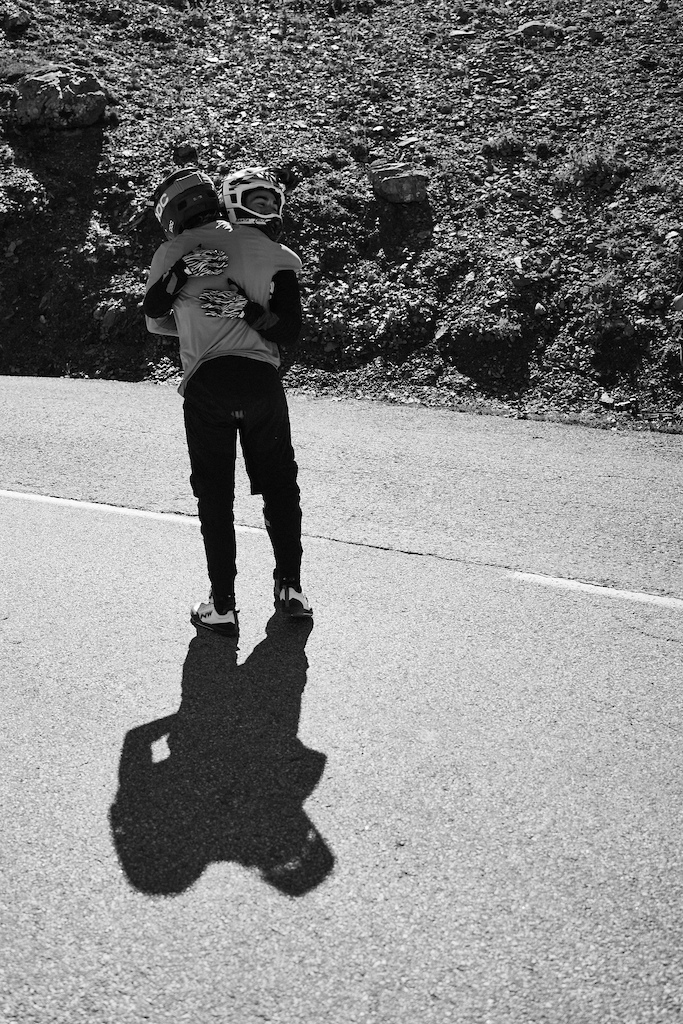 First try went well for these 2 !

What a relief! The hardest part of the day was done! It was pure exclamation from them. Oli was so pumped that he suicide no hander the road gap on his second jump, and then did it two more times. Max jumped it three times in total before a herd of sheep positioned themselves on the landing and stopped the session! It was getting windy anyway. 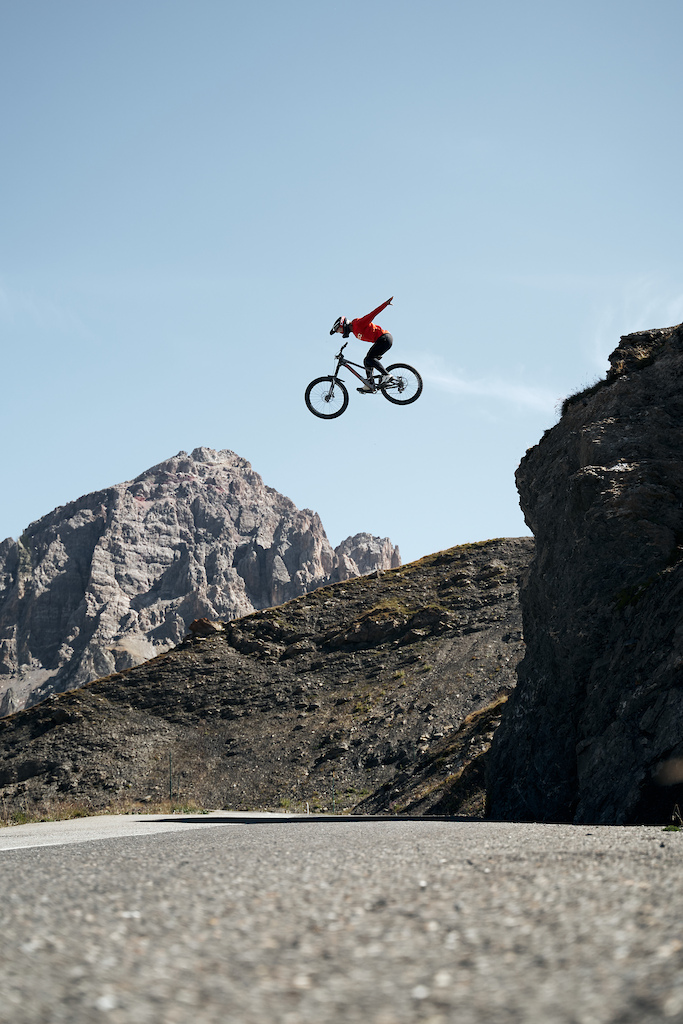 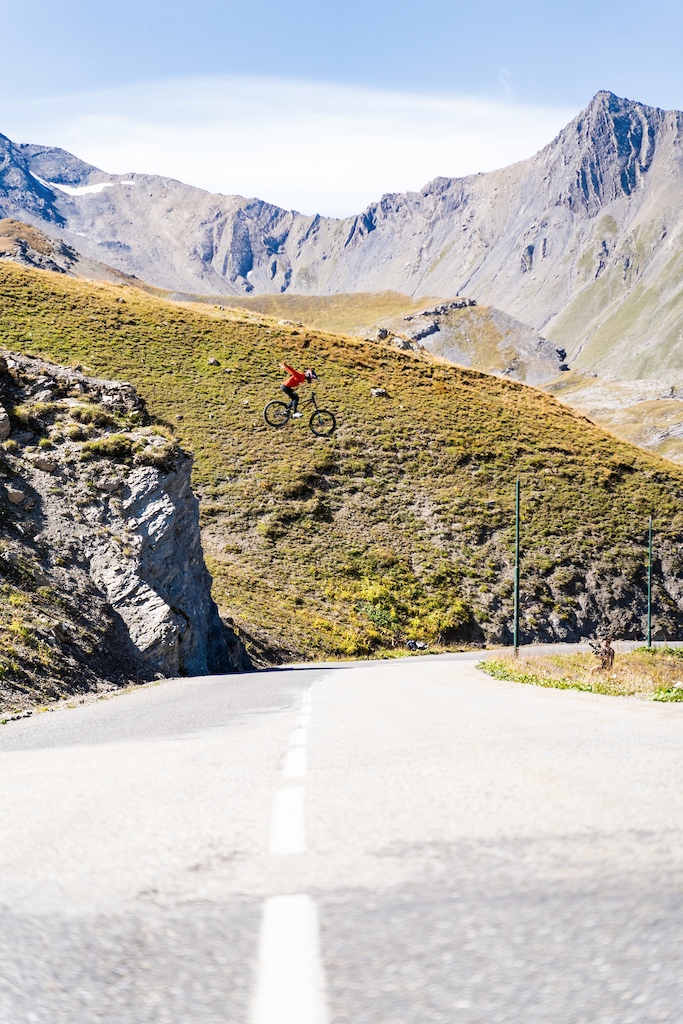 Oli with a perfect suicide no hander 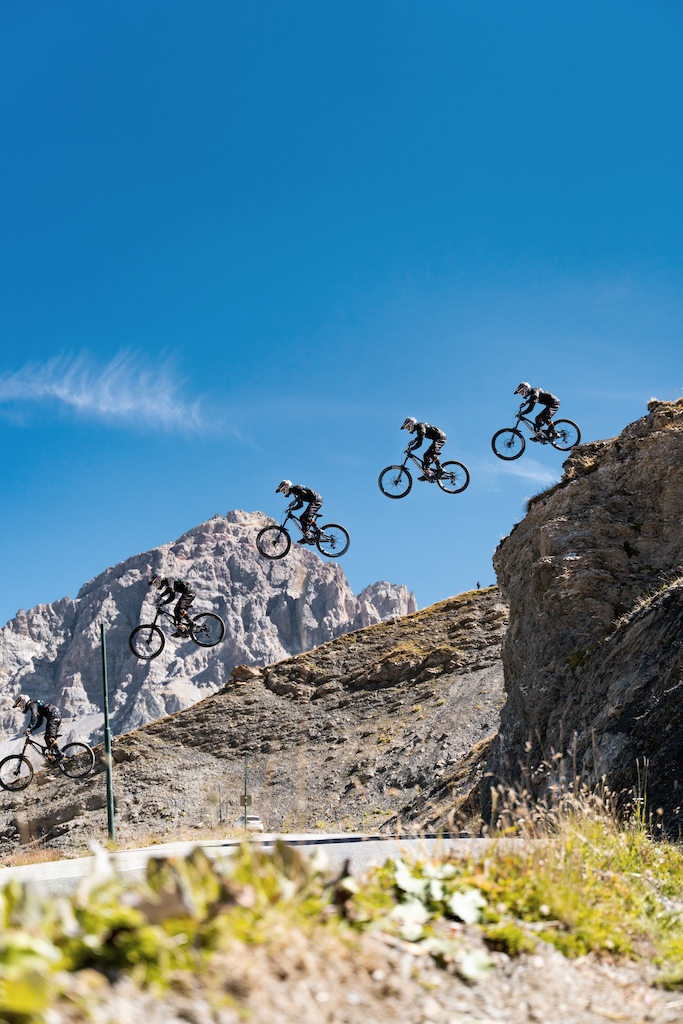 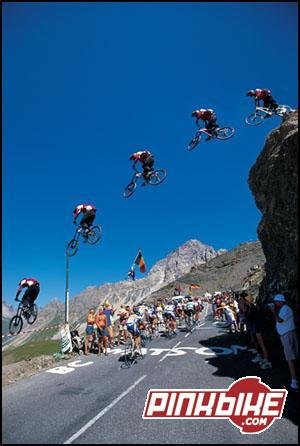 sborgic26 (Nov 29, 2020 at 5:52)
To all the “he cased it” and “he didn’t land it” folks. Let’s remember he did this almost 20 years ago and imagine trying to Guinness pig a jump with one shot while one of the biggest events in the world is happening around you. Dave elevates our sport on that day!

ATXZJ (Nov 29, 2020 at 8:53)
Watson's jump that day was 100% pure badassery. Even if they do stick the landing, all the other tour jumps while super cool, do not have the same significance.

jaame (Nov 29, 2020 at 10:12)
Totally. No practice, no run ups, first time to do that kind of shiz. Totally awesome. More notale than the case was, his trousers came down by the looks of it. Perhaps he should have worn skinny jeans and a belt.

veero (Nov 29, 2020 at 12:01)
The way he's pulling his trousers up at the end of the clip as he's scurrying away with his bike to the van is just priceless. Absolute class and for that to be 20 years ago is just mind blowing. A true pioneer!

oliv69 (Nov 30, 2020 at 0:47)
What Dave did was completely incredible. Pretty crazy for sure but helped MTB reaching new heights. From his own words, he wishes he could have jumped it with a clean landing, and even a bigger line, but he didn't had time/opportunity to do it. He wanted it real bad, and it's why he tried it this way, no choice, and he was super close to land it despite the landing.
We didn't wanted to be like "hey we landed it, not you". It was the last jump he did in France that nobody ever tried again, we just wanted to have good time jumping one of the most iconic jump in MTB, paying tribute to him and his vision.

CRAFTY-P (Nov 30, 2020 at 17:18)
Guiness pig: a trottered porcine with a ravenous thirst for the dark liquid that turns your shit black.

1- Read the article and quotes from Dave Watson.
2- Dave didn’t clear the gap, even if he did, he might have crashed because the landing wasn’t ready for such a gap.
3- This gap is HUGE, so anybody that can get a shot at it is free to do whatever they want to make it safer.

> ... This drove the technical side of that jump way up and added to the factors in a huge way.

So if I build a foam pit on the side of the mountain (to "make it safer") and clear the drop, I can claim I have hit Dave Watson's road gap? Point being - if you don't feel safe recreating something - what's the point at all?

scott-townes (Nov 30, 2020 at 7:21)
@Vraiphil: True, I'd rather see people stomping huge gaps like this classic so whatever is needed to get the shot.

NinetySixBikes (Nov 30, 2020 at 1:48) (Below Threshold)
By using their global platform to showcase our niche sport? We dress up as wannebe motocrossers and need 200mm of travel to hit drops a BMX'er would do on a 20" rigid bike. Yeah, we're a cool bunch allright....

It was sort of cool that first time, but it's getting repetitive over the last years. And sooner or later, it's going to end in tears. Ever noticed how they always pull over on the left hand side of the road in case of a mechanical or when a car has to wait?
I honestly don't think we're doing "our" sport any favours with these shenanigans.

evilempire (Nov 29, 2020 at 5:26)
I loved that segment in NWD! Dave and Wade and Richie and all those riders were what inspire me to keep riding today! Not near their level but hey it’s pure pump up! Any landing you walk away from is a good landing!

jeremiahwas (Nov 29, 2020 at 12:32)
At least this way he didn’t risk hitting one of those roadies with an errant rock or something. I’m all for the spirit of the thing (not that anyone asked) but not at the expense of risking danger to others. Reminds me of those idiots that post selfies of themselves doing handstands on the edge of skyscrapers - ‘yah, you’re amazing, never mind that if you fall or drop your Gopro you’re gonna kill someone else.'

colincolin (Nov 30, 2020 at 0:44)
This. In a world where we're all about saving other's lives why is no one talking about how he could have killed one or more of those roadies... I think the gap was absolutely badass but it sure is hypocritical to not even mention this imo. Even more to downvote a based comment like yours. Look at Tom Walker's trail gap. There are always things that can happen to make you come up short. Which would have been disastrous.

With modern geo and suspension DWOG would have stuck the landing just fine! (blame it on the bike...

madmon (Nov 29, 2020 at 7:16)
you can see the major difference in the bikes in the air the new ones all stretched out. Massive respect to Dave Watson the guy who did it not those who completed the task they just get regular dirtbag high fives.

IntoTheEverflow (Nov 29, 2020 at 8:38)
Yes, how times have changed. The front wheel of a modern bike would have landed, before the back wheel even took off.

bike4christ (Nov 29, 2020 at 13:47)
I was just talking about this with a buddy of mine the other day! So cool to see someone go back and hit that gap. As others have pointed out, the two biggest differences is the advancement in bike tech and having more time to build a proper lip and smooth out the landing compared to Daves send back in '04. Well done!

stpetebikeco Plus (Nov 30, 2020 at 8:38)
It’s crazy how much mountain biking has evolved. Drops like that are fairly common nowadays.