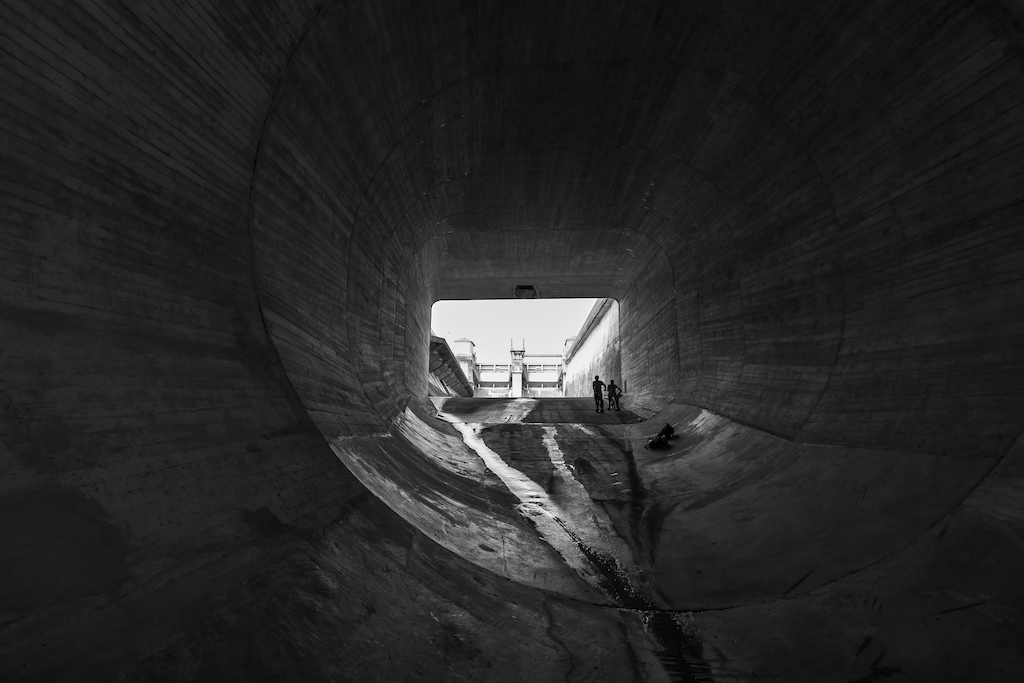 Back in the days, so far back that I barely remember when, some friends and myself started browsing the internet in quest of unique spots to ride our bikes on. Finally back in 2017, Fabi, Vitus , Lukas and myself decided to sit our lazy asses in front of a computer and finally get to work. Countless hours and beers later, we had found what we were looking for. Some of the spots we rode were the results of a whole lot of research and preparation, others were lucky incidents, simply us driving by something that looked like it was rideable and deciding to give it a try. Here are four of the best spots we found and rode on this adventure. 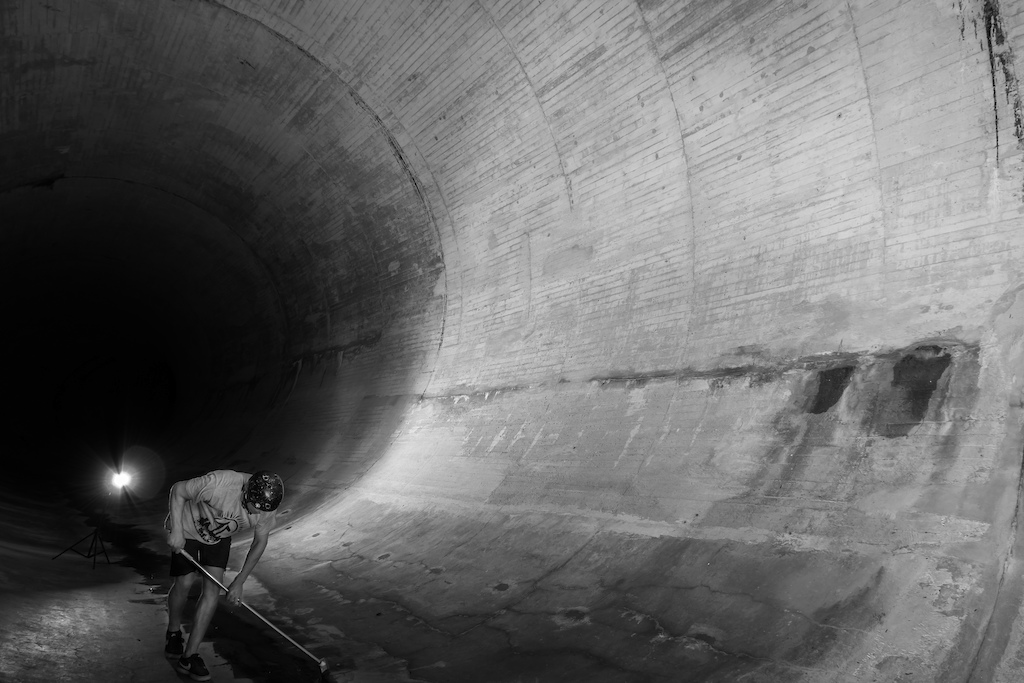 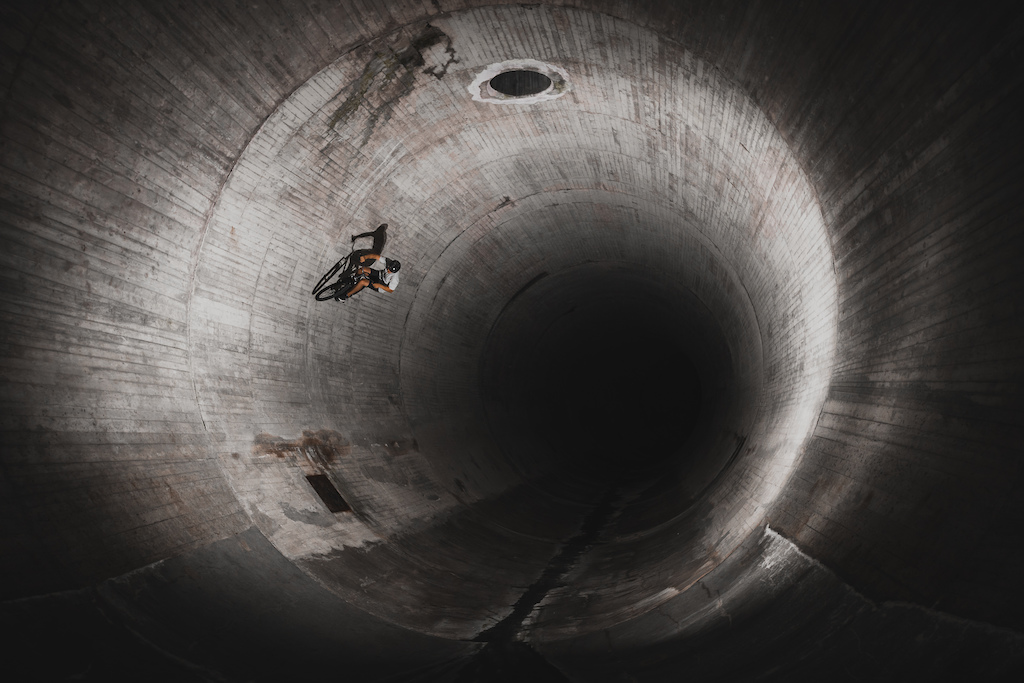 The first spot is located at a huge dam in Germany near the Austrian border and I will never forget this spot. We needed to talk to some friends to find its exact location and how to get to it. The internet does tell you almost everything so sometimes you need to talk to the right people to get the information you need. It is a huge full pipe higher than a 3-story house; one of the best spots we found. It’s basically an overflow pipe of the dam used to regulate the level of water in case of heavy rain or flooding. The water is held back by huge metal doors which are almost as high as the tunnel itself.

It was one hell of a mission to get into it! First, we had to use a rope to get the bikes down safely, Then, we had to climb down the huge metal door, totally freestyle! We were afraid of the huge doors holding the water, because it was impossible to tell if they would open or not which would have been catastrophic. We tried not to worry about it too much and hurried up, got the photo and left right away. The tunnel is about 150 meters long and I can tell you that it gets dark in there! 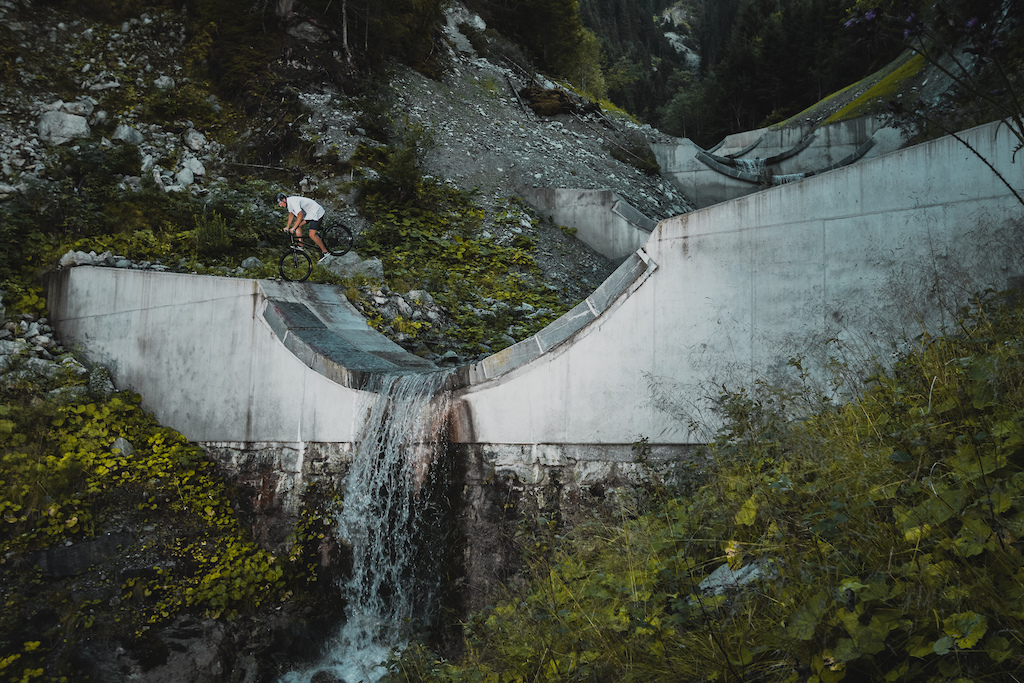 At this spot, we were extremely lucky. We were driving home from another dam spot in Austria and my photographer Vitus told me he saw something interesting on the left side of the road. I asked him what it was and he said it looked like a half pipe with some sort of waterfall coming out of it. I hit the brakes right away and we drove back because as you can imagine, I was stoked!

We checked it out and I was not too sure about it, not sure it was even possible to ride it. There was water coming down in the middle, it was about 20 cm deep, fast and cold. We had to clean the half pipe because there were a lot of rocks in it making it impossible to ride. We also tried to build a little D.I.Y. dam to slow down the water because I was afraid of falling down and it helped a little. After all our preparation, I did a few test runs and only to realize that it was still 100% sketchy, but we managed to get that shot done. 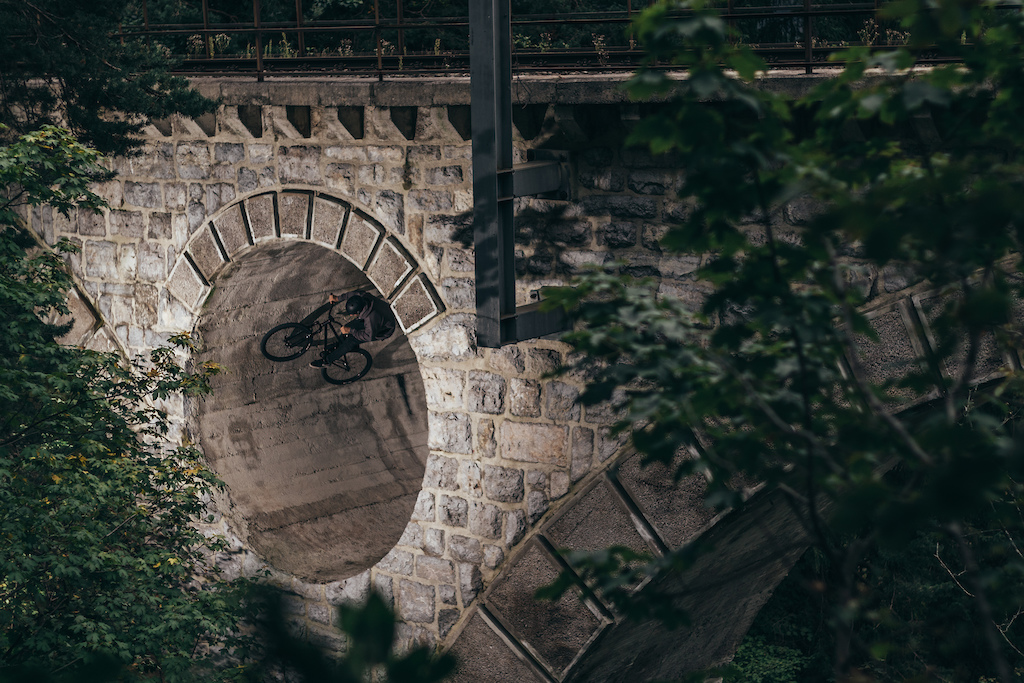 For this spot, we actually found it online; a simple bridge with two big holes in it. Almost perfect full pipes to ride a bike in. It was the way to the spot that was extremely sketchy. Imagine a big mountain, almost 2000 meters high, steep as f*ck with a railway going around it. Do not get me wrong, the railway does not go to the peak of the mountain, it just goes along the side of it but that railway looked crazy. The train has to pass many tunnels and many bridges. There is only a short period of time where there are no trains on the rails. If you choose the wrong time, it is almost impossible to jump out of the train`s way. Not only is it super dangerous, but you get busted very easily if someone sees you. 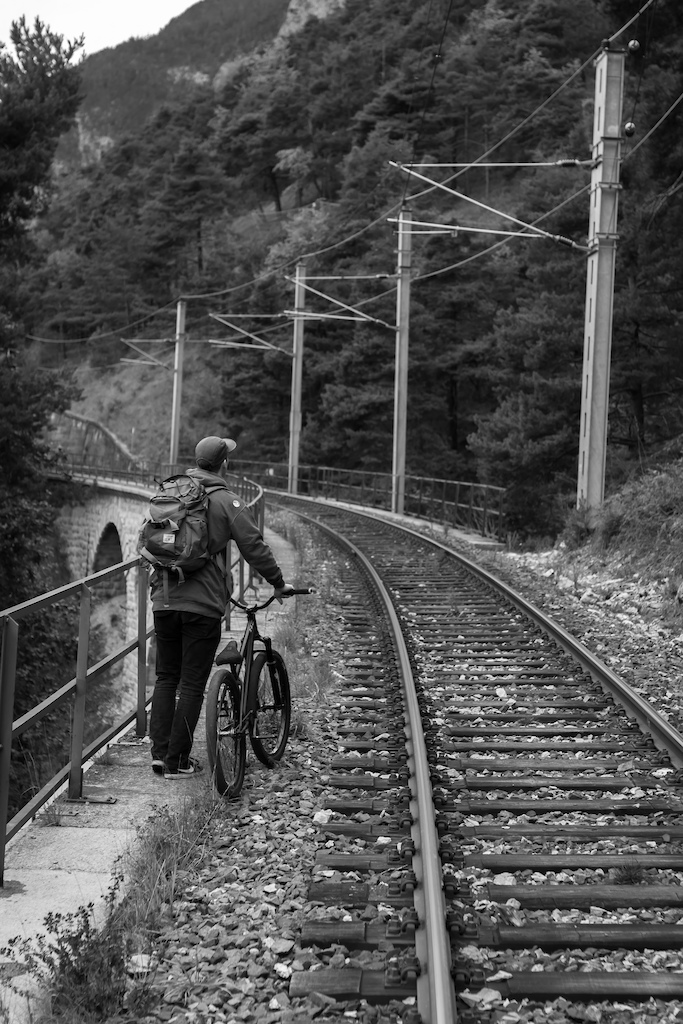 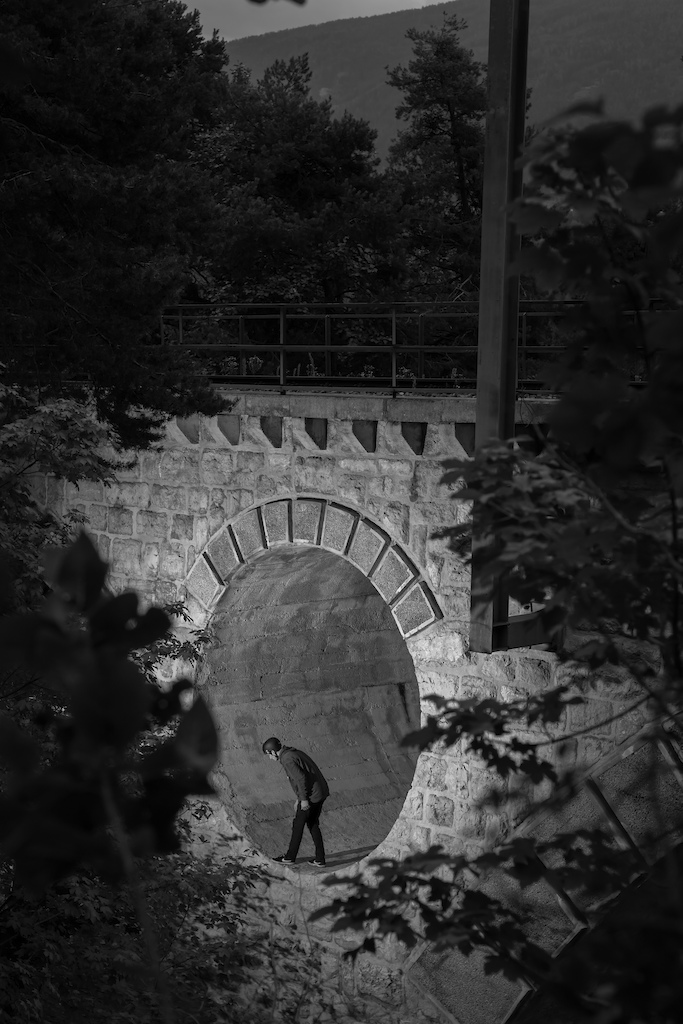 To be honest, I chose the wrong time and a train passed beside us but we were lucky enough to hear it right on time and move out of the way. We went and hid under a bridge and luckily no one saw us. That pipe is pretty small to ride and pretty scary because if you loop out if it, you’re in real trouble. 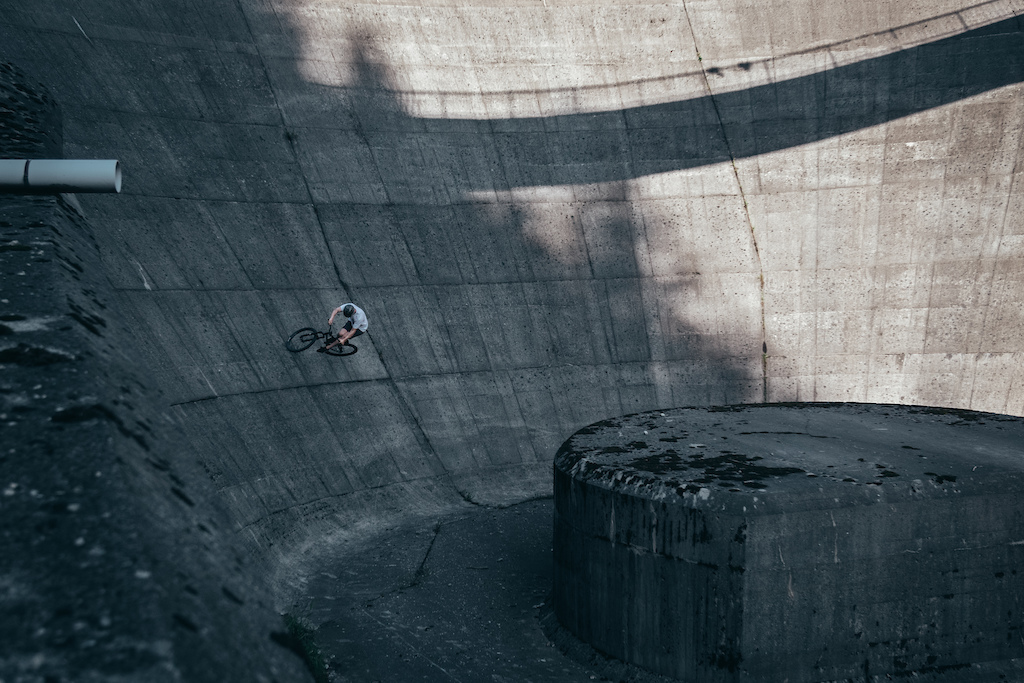 Surfing the internet for hours and scouting for spots does not make much sense to most people but in the end, it was well worth it. You just need to search for the right stuff. Dams almost never disappoint. That one looked perfect from the satellite view, but it did bring a fair share of difficulties. We had learned from our previous trips that it was mandatory to bring a long rope in case you have to climb up or down and bring the bikes safely. A broom and a shovel are also a must for this type of expedition. At that dam, we needed everything. 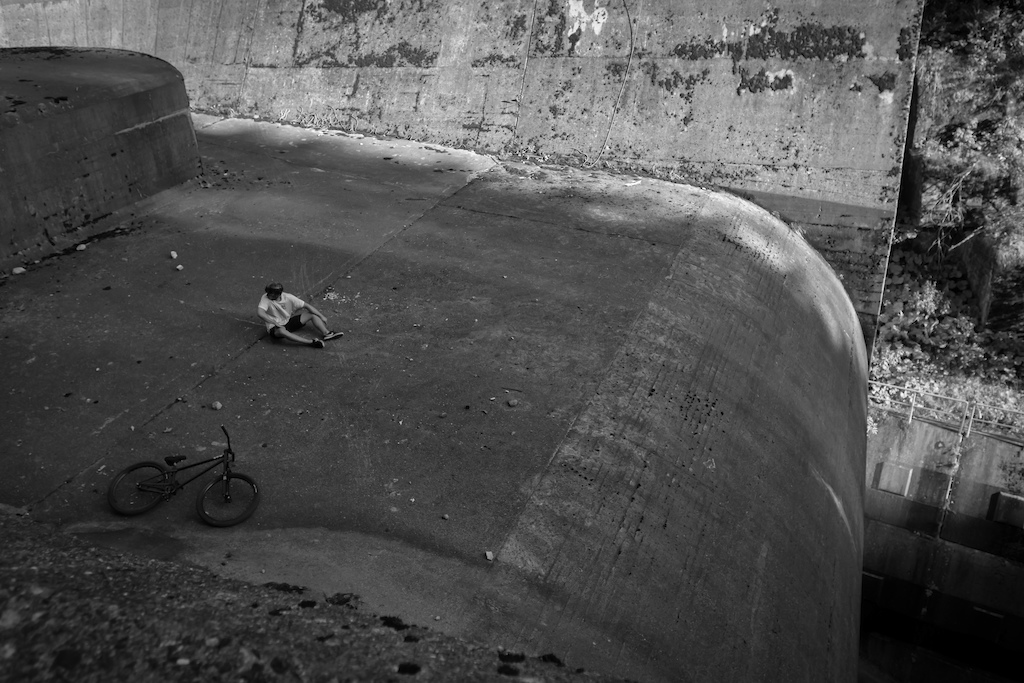 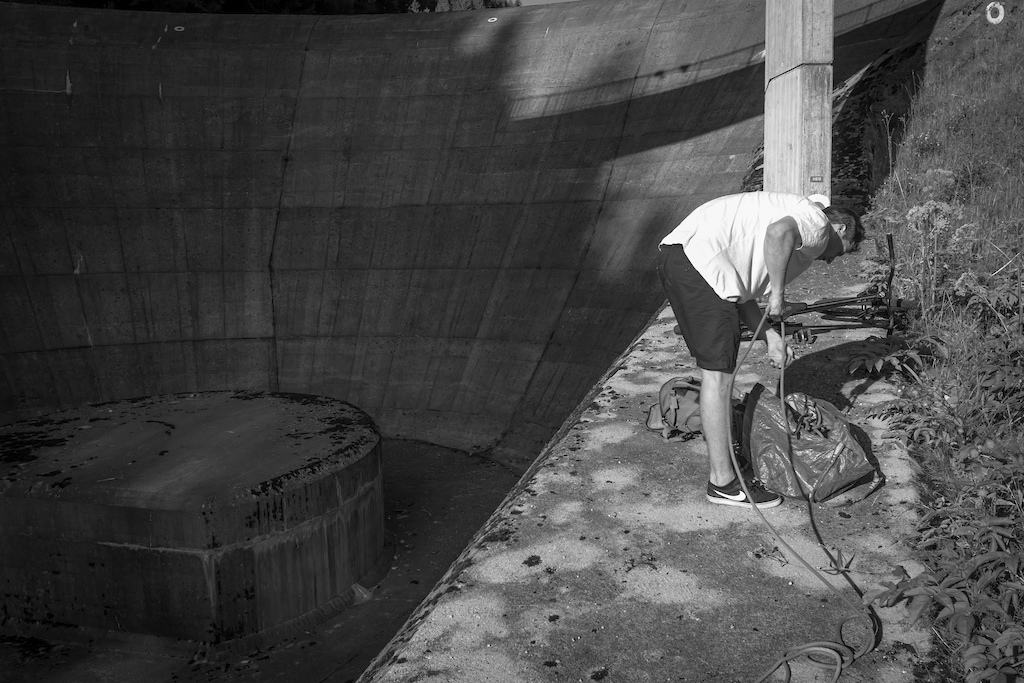 I had to climb down a steep concrete wall on my own because they had security cameras everywhere. Vitus was looking for the best angles to shoot the photo while I managed to climb down. The dam was a huge bank, but the run up was uphill, so the pedaling involved was horrible. I had to pedal uphill to the spot, then somehow slow down going downhill or fall down and die. It was scary as f*ck. And yes, I do ride brakeless. That was one of the rare days I would have loved to have a brake on my bike. Imagine a dam followed by a 50 meter concrete waterfall, just without the water.

dkidd (Jun 17, 2020 at 8:15)
Pretty much every one of these shots is print-quality. Fantastic camera work and riding.

big-red (Jun 18, 2020 at 5:12)
If you think this is cool, you'd probably love this exploration of the three abandoned power plants at Niagara Falls: www.vanishingpoint.ca/niagara-hydro

goffboy (Jun 18, 2020 at 10:23)
That is definitely cool. Thanks for sharing. I just sent it to a friend who works for BC Hydro and has to walk through currently used tunnels for inspection. He'll get a kick out of that. I also shared it with my Dad, who grew up in Hamilton. Curious if he remembers some of those things.

iamamodel (Jun 19, 2020 at 0:13)
There's a full pipe that size that is part of our biggest hydro electricity scheme too. I've never been there as it is an absolute mission.