Event of the Year Nominees


During the time between mid-spring and fall in the Northern Hemisphere, there are world-class events every week. The level of competition in mountain biking continues to grow, and there are more opportunities than ever for people around the world to tune in and watch if they can't be there in person. There are plenty of events that could be considered the "Event of the Year" but a few stood out above the rest.

Red Bull Joyride, World Championships, and the Enduro World Series finals at Finale all carry an unfathomable amount of pressure, and are the ultimate events in their respective disciplines. They're the culmination of a season's worth of hard work, where athletes put it all on the line to attain that elusive podium spot.

Each of these events saw competition that kept viewers and racers on edge until the end. Which one do you call the best? 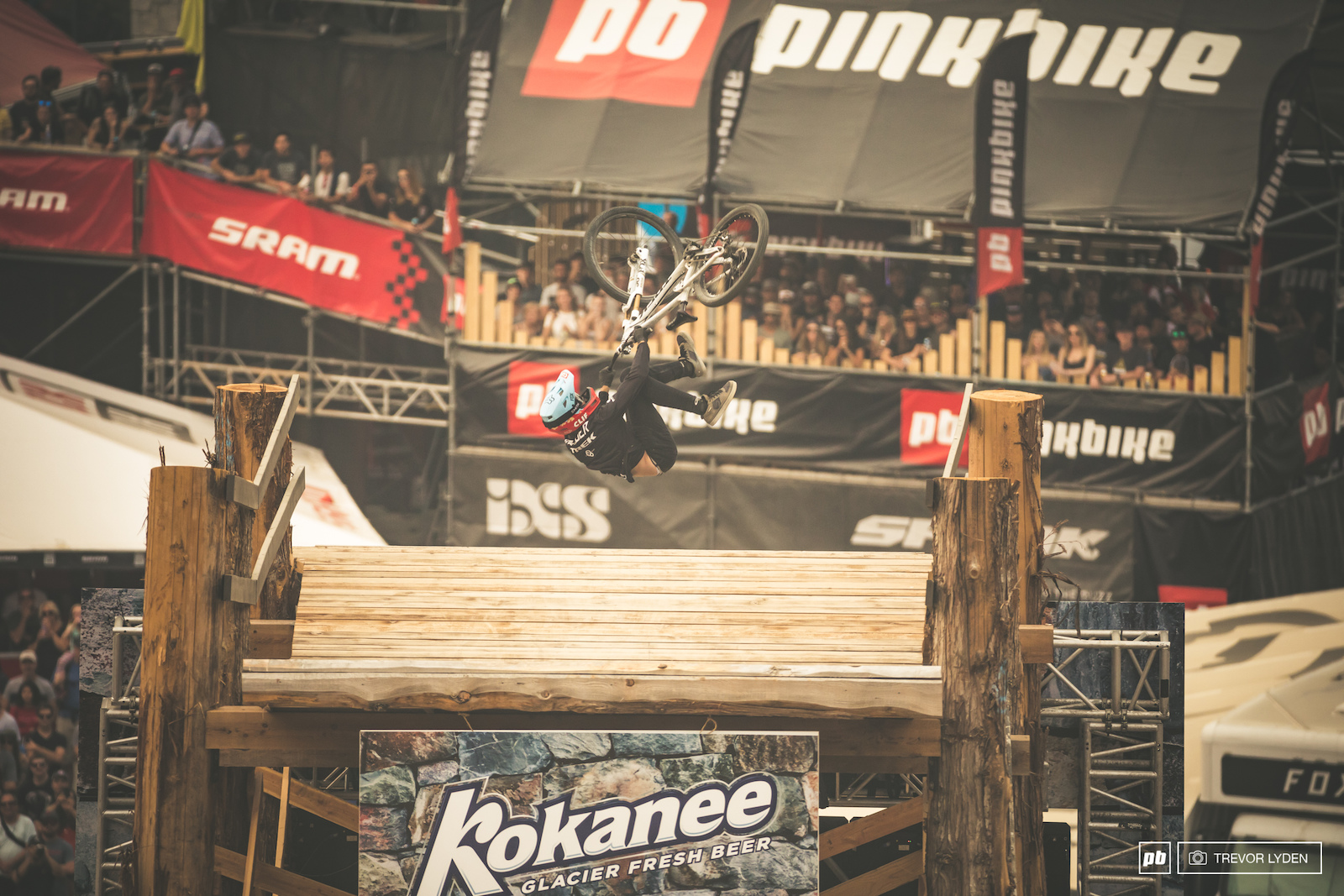 Red Bull Joyride at Crankworx Whistler is the biggest event of the year on the slopestyle calendar. It's the final stop in the Crankworx FMBA Slopestyle World Championship, and the last opportunity for riders to compete for the Triple Crown.

The level of competition and the tricks pulled progresses each year, and the moves that it takes for a rider to compete, let alone land on the podium, become more and more challenging. This year, many riders had mistakes or falls in their first run, making the second run all the more critical. Brett Rheeder, who had a low score in his first run, was one of the first riders down on run two. Rheeder wove together a phenomenal sequence of tricks, landing a flat backflip tailwhip off of the final drop into the finish corral and earning a score of 94.50.

The last rider down, Nicholi Rogatkin, was the only rider who stood a chance to best Rheeder's high score. Rogatkin laced together an impressive run with surgical precision that seemed to be smoother and cleaner than his first attempt, but would it be enough? The anticipation grew as thousands of people at Whistler and even more watching live from around the world waited for his score. Rogatkin's 96.50 bested Rheeder by a slim margin, but it was enough to give him the win at Whistler, making the total three, and securing the previously untouched Triple Crown. 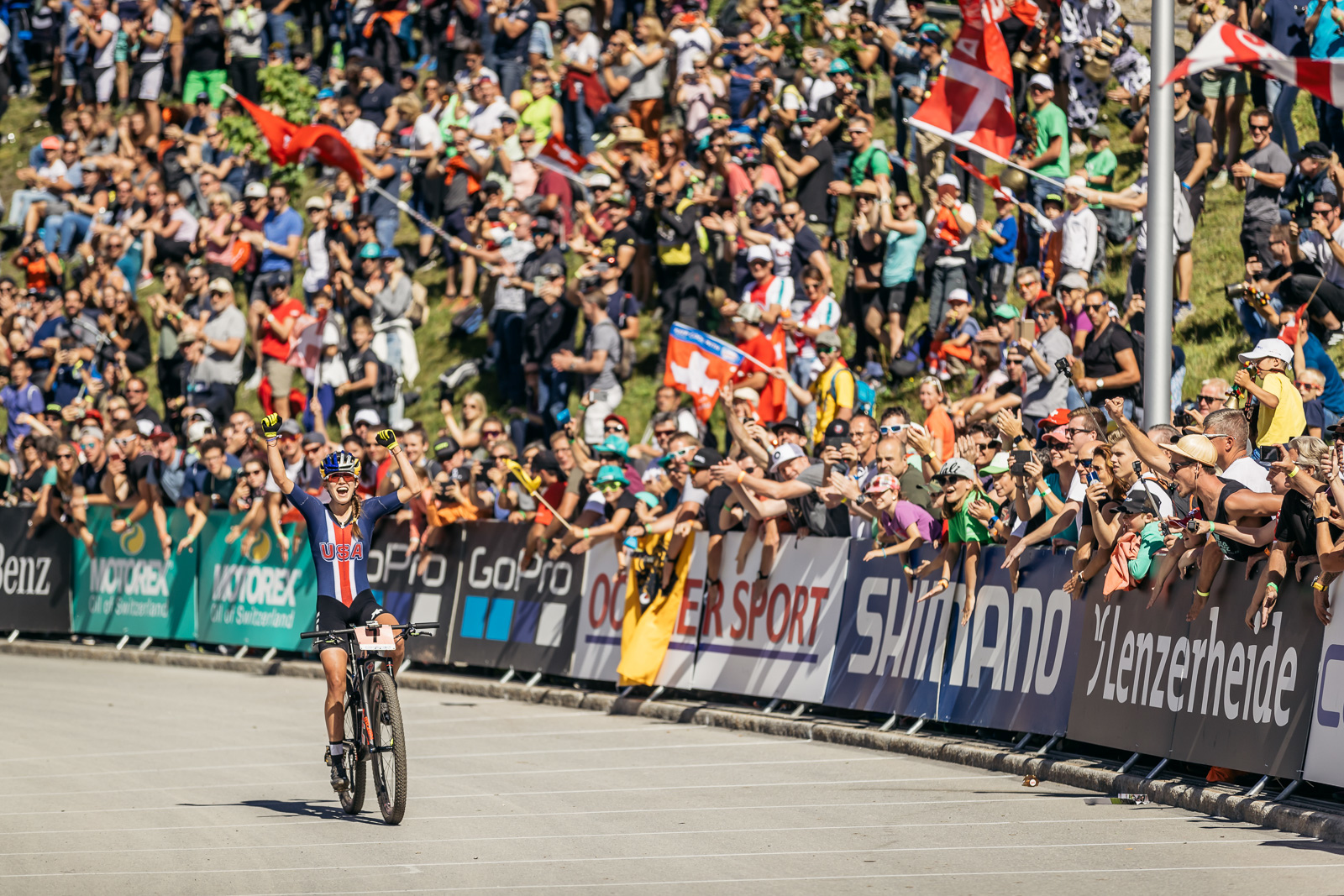 World Championships is the biggest one day event in XCO and DH mountain biking, and this year the event took place in Lenzerheide, Switzerland.

In DH, Loic Bruni claimed his third World Champs title in the men's race, with Martin Maes a mere .2 seconds back, while Rachel Atherton came from a great World Cup season, amidst strong competition, to take her fifth World Championships win in the women's race by 9 seconds.

In cross-country, defending World Champion Nino Schurter took the gold medal in the men's event on home soil. The race that had everyone talking, however, was the women's cross-country event. Annika Langvad drove the pace early on, opening up a gap that at one point stretched 35 seconds in front of American Kate Courtney and Canadian Emily Batty. Courtney took advantage of a crash that Langvad had on the third lap to make up some time but was still behind the Danish rider by 20 seconds until the fifth lap. Once Courtney had Langvad in sight, she upped her pace and closed in. Choosing technical lines and capitalizing on a mistake Langvad made, Courtney was able to make a pass and open up a gap to win her first Elite level race and take home the World Championships gold medal and rainbow stripes to America for the first time in 17 years. 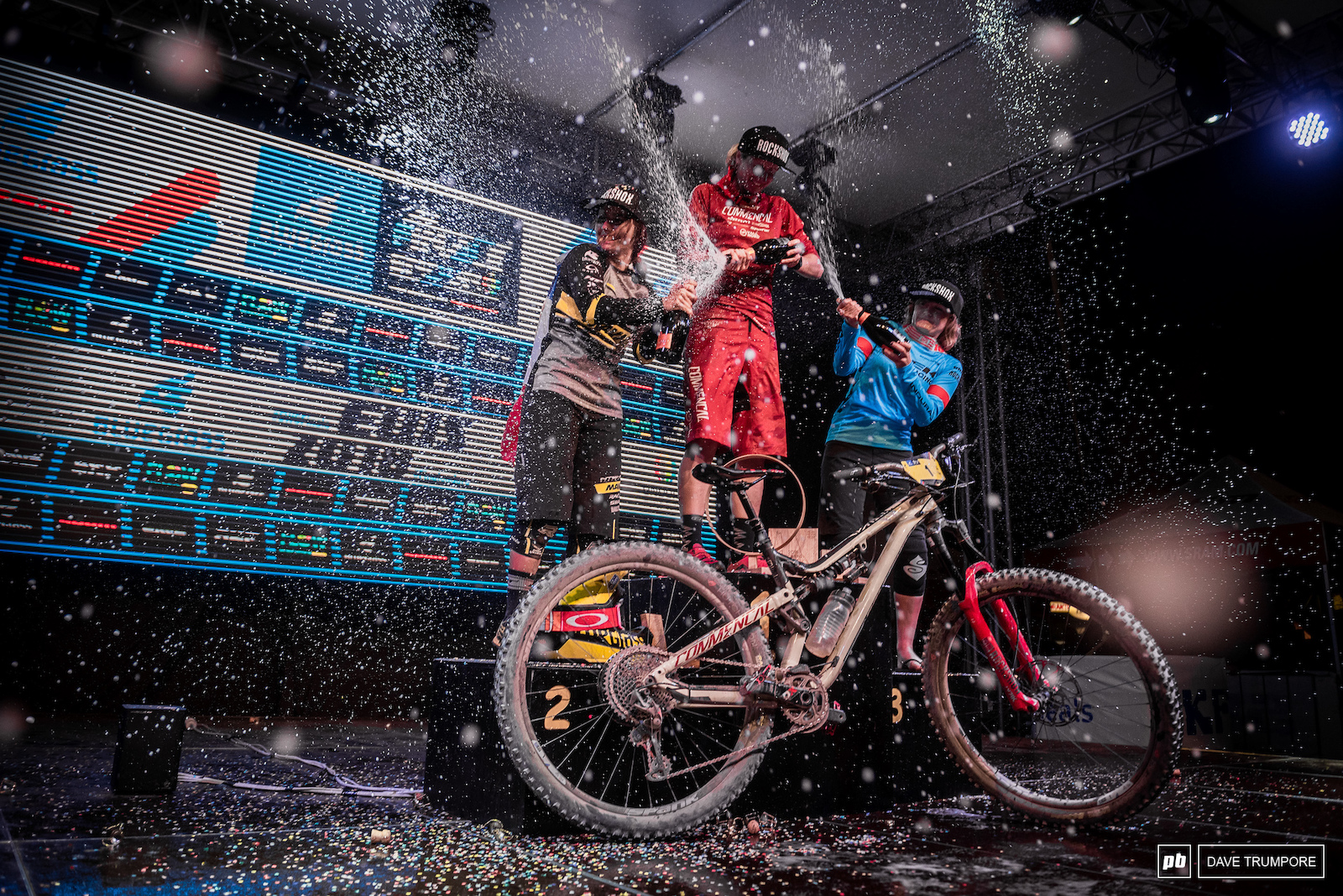 The Enduro World Series came to conclusion in Finale Ligure, Italy, on the banks of the Mediterranean Sea. After a year of intense competition, the final day would crown the season's overall winners.

On the final stage, Cecile Ravanel bested Isabeau Courdurier and managed to put six seconds into the entire women's field. This gave her a perfect season with eight wins in eight starts and the world EWS title.

In the men's race, Richie Rude won the day, taking all four stages, but Sam Hill rode a concise, clean, and consistent season to secure the overall title. This is Hill's second straight year taking the overall and it proves that the master of flat pedals doesn't need the clipless advantage in getting things done.

mfoga (Dec 10, 2018 at 11:29) (Below Threshold)
@Mattin:
I don't know I will take some of the big wave surfing events over Rampage. Just look at the last Peahi Challenge. The risks taken were insane. Watching people throw themselves over mountains of water that is chasing them down is just crazy.

schulte1400 (Dec 10, 2018 at 12:05) (Below Threshold)
Every year, everyone on Pinkbike complains about “so and so should have won” and the tickets get more and more expensive and the event more and more exclusive, yet you want to nominate it for event of the year? Sorry, I love the riding in rampage, but the event itself needs some work.

mfoga (Dec 10, 2018 at 13:05)
@pbuser2299: You have never had spend time in large surf let alone big waves. You also can’t drown on dirt, in these waves it’s a real possibility even with all the safety equipment.

dubod22 (Dec 10, 2018 at 18:19)
@mfoga: I don't think you can say one event is sicker than another. What the pros are doing in most extreme sports is pretty nuts so there will be a mutual respect across all athletes. I'm sure pro-surfers will think people riding downhill as fast as they can between trees and rocks is pretty mad for its own reasons.

The maddest competition I've heard of was a bunch of base jumpers jumping off a bridge and seeing who could deploy their chute the latest. And the prize?

TightAF (Dec 11, 2018 at 17:49)
@pbuser2299: reminder that surfers smash their face into pointy coral with thousands of pounds of water smashing their body after that, then they have to hold their breath so they don’t drown after getting smashed. Surfing is freakishly gnarly

jervis (Dec 10, 2018 at 19:55)
And Gee returning to form with a first place qualifier and podium appearance in the finals!

Svinyard (Dec 10, 2018 at 8:45)
Rampage! If you let a bunch of 7yro groms watch all these events and vote... Rampage is easily the one they take. I think its one of the only events where people outside the sport are happy to tune in and "get it".

DTShane (Dec 10, 2018 at 9:00)
Maybe this should be called Race of the Year? Event, could be a festival, consumer demo, etc. Of those, Sea Otter, Roc d Azur, Sedona MTB fest, etc. would all qualify. Races are awesome and I love them, however, the sport as a whole isn't just about racing. Most people just ride, and they are the vast majority and should be represented don't you think?

EnduroManiac (Dec 10, 2018 at 11:24)
I think Red Bull Joyride, Rampage and any other rated contest won’t qualify as a race. Hence the Event category I guess.

PHeller (Dec 10, 2018 at 10:16)
To me, the event of the year should be reserved for festivals or races that not only draw bigs crowds, but expand networks of trails open to the public, and furthermore integrate MTB into local communities. EWS deserves credit in this regard, as those races are typically on public trails that draw in big local crowds and and let local communities take pride in their investment in those trail system.

NoahWeimann (Dec 10, 2018 at 8:24)
Sure, big events with high budgets and corporate sponsors by the dozen are great, especially with the great coverage they’ve had from RedBull tv and whatnot, but none of them have that “sell a kidney to get there” feeling that you get from something like TDS. More small events please.


I'd say MTB World Champs then. Viewership was higher in cross country than DH...

PauRexs (Dec 11, 2018 at 0:52)
Meanwhile Oton's POV of Mega Win of this year just got 2M views without any help... That event far surpass the potential of any other MTB event... and after so many years still discredit and underrated...

hhaaiirryy (Dec 10, 2018 at 9:53)
Should be hard-line. I was at cwx this year and thought it lacked atmosphere compared to previous years. Still sick though.

BenPea (Dec 10, 2018 at 11:07)
These awards clearly wouldn't exist if they didn't have to fill 5 months of dead MTB air. It's a good thing us Europeans get the two Mikes' big e-bike shoot out this week. Tough for this site when it hits December.

level4designs (Dec 10, 2018 at 13:44)
Event of the year for me, riding down Earth Circus this fall with just me and my wife, not a sole around, sunny weather after morning rain, not a brake bump to be found... by far the best event of the year...

kjjohnson (Dec 11, 2018 at 9:42)
Congrats to the winners of all these events; for me though, the most exciting (and surprising) was Kate Courtney's performance at Worlds. This makes it the clear favorite for me.

JakinM (Dec 10, 2018 at 19:20)
Why the heck is the Enduro Finals on there and not Rampage? I personally think it should be the World Champs, but Rampage is like the most popular mtb thing in the world. Also, Hardline is maybe the dopest event out there.

jrocksdh (Dec 10, 2018 at 9:36)
Yep, basically a week long event where a ton of sweat equity goes down- festival type atmosphere for fans-where fans also do a ton of riding.

jejsd (Dec 10, 2018 at 10:11)
EWS!! Are you kidding, an event that slowly drifting in the cycling murky waters of doping!!
What's about Feist Series? Hardline!!!
Or some top-notch regional events!! BME, trans-cascadia, etc.. The more events done for the right reasons than these above!