What a year! Reporters ran out of superlatives to describe the action before the 2018 racing and slopestyle seasons had reached their halfway points. Choosing the standout performances from a year of competition that set the bar so high sparked some contentious moments here at PB. Picking a winner, however, made the nomination melee seem like a THC tea party. Each of our five nominees: Jolanda Neff's battle of La Bresse for the XCO World Cup title, Nicholi Rogatkin's Triple Crown of Slopestyle, Sam Hill's two for two EWS championship titles, Martin Maes' back-to-back EWS and World Cup DH wins, or Kate Courtney's fairy-tale gold medal at the Lenzerheide XCO World Championships, could become an award winning sports documentary - but only one can earn this award. So please, lay down your weapons and take a deep breath... 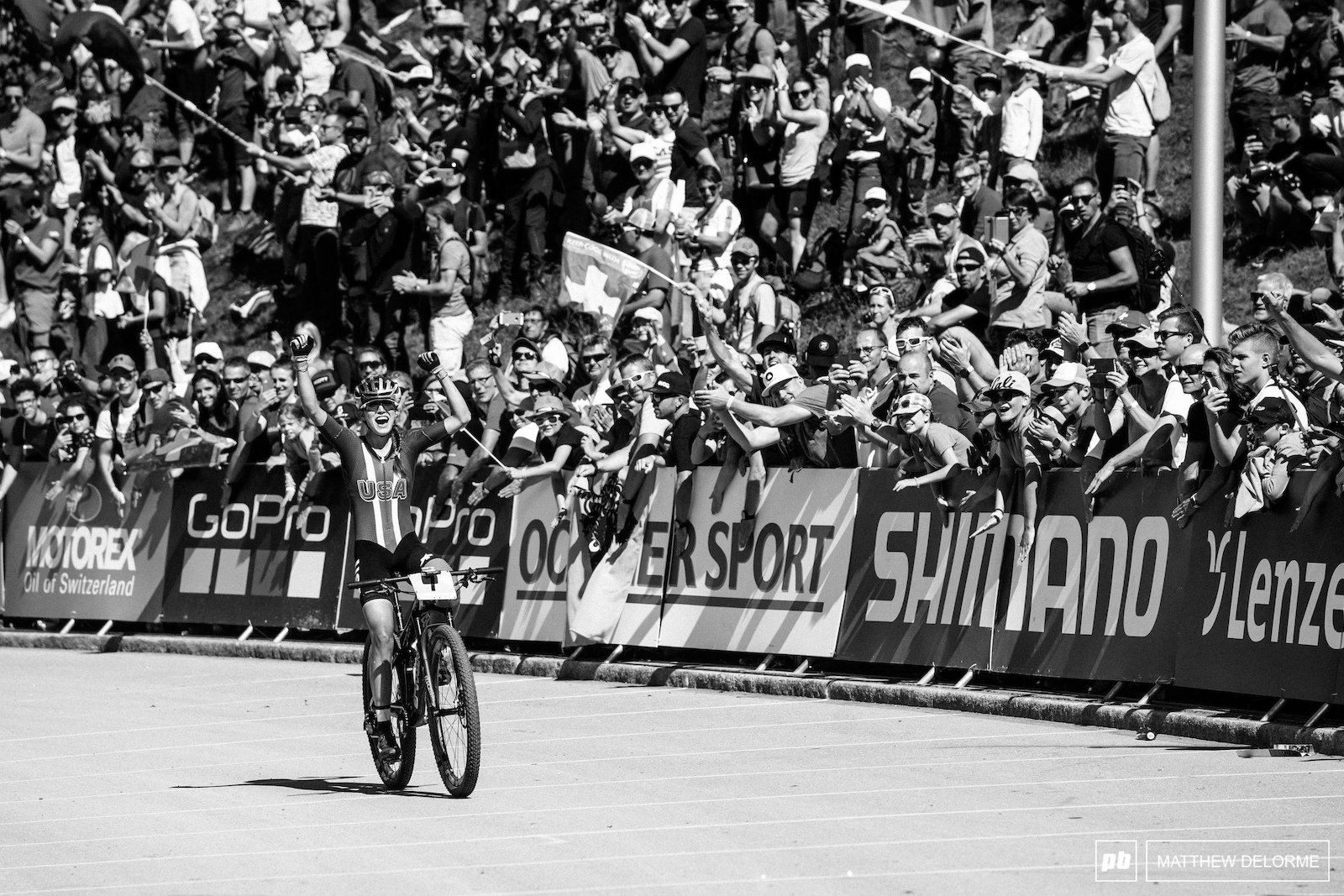 Out-of-the-blue victories at the World Championships are most often blunted by extenuating circumstances. Inclement weather, injuries, uncooperative officials, bad courses - reporters grasp for anything that might help to explain how a start-line of seasoned greats could be laid low by the mid-pack contender who snatched the gold and crashed the podium party. Not this time.

Kate Courtney was on the radar as a promising up-and-comer after earning the U23 series title in 2017, and posting a number of top-ten results this year in her first season as an elite World Cup cross-country racer. Nobody, however, considered the 22-year-old American as a medal contender at the World Championships in Lenzerheide, Switzerland. The demanding course favored more seasoned athletes, especially World Cup series winner Jolanda Neff, who was competing in front of her home crowd, and the monstrously powerful Dane, Annika Langvad. Should those two falter, Canadian Emily Batty and France's Pauline Ferrand-Prevot both had been on late-season World Cup tears and were definitely in the medal hunt. Against those intimidating odds, Courtney's plan was simple: Stay on pace and ride her own race.

Under blue skies and perfect track conditions, at a venue that has been praised by all, USA's Kate Courtney found her way to the front, and in a relentless battle that distanced the international field, she clawed her way back from repeated attacks by Emily Batty and race-leader Annika Langvad. Batty faded in the closing laps while Courtney inched towards Langvad, persistence versus power. Besting Langvad in the race's final moments, Kate Courtney crossed the line alone, World Champion - fair and square.

kelownamike (Dec 21, 2018 at 8:06)
This was an awesome performance. If you haven't watched it, women's XCO is great. Passing, sprint finishes, risky descents, and huge efforts where they are collapsing after crossing the line. Plus such different styles for the leaders it really makes for unpredictable racing.

chriskneeland (Dec 21, 2018 at 9:10)
Women's XCO is really competitive right now. I watch the races sometimes while I'm on the trainer for motivation. These girls are getting after it.

jfloren (Dec 23, 2018 at 15:25)
I had the privilege of watching this race in person. It was a mind-boggling performance by Kate. When Annika opened a big gap with a supreme effort on the big climb at the start of the final lap, it looked like that was it. Many fierce competitors would have changed their goal at that point to more conservative racing and protecting the silver medal. Kate knew better. Immediately after that climb was the most difficult descent of the course, followed hard on its heels by more short climbs and descents with nowhere to recover. Kate was racing exactly at but not beyond her limits, and kept at it. By racing within herself, she had forced Annika to push her limits just a bit too far, and Kate kept close enough to be in perfect position to make up the lost time and more on the remaining two-plus miles of that punishing track. What a thrilling performance!

TyPierce (Dec 21, 2018 at 8:26)
Well done! Getting to watch Kate’s victory with my 10-year-old daughter who’s really getting into riding was a experience I’ll never forget. Go Kate!!

Klainmeister (Dec 21, 2018 at 10:01)
Same here! When she passed Langvad I was hollering at my TV like a madman. The highlight of the year alongside Maes!

JasonALap (Dec 21, 2018 at 8:51)
I watched this live while working bright and early on a Saturday morning. Her performance brought me to tears of joy. What a gritty, determined race. To stay focused and patient as Annika dropped her on that last big climb speaks volumes about Kate's fortitude. I'm so glad I got to watch the race. Congratulations, Kate! Can't wait to see what the rest of your career has in store for you.

stikmanglaspell (Dec 21, 2018 at 14:00)
Jolanda Neff's performance at the world cup finals, was the greatest performance in MTB racing history. In this category, Neff was completely hosed/robbed. Holy cow. Are these the same judges from Rampage? #NeffGotRobbed

jclnv (Dec 21, 2018 at 15:49)
Bit too much USA USA and Redbull coolaid going around I think. Not enough smart/objective guys like yourself around Stik.

I agree though. Her mental strength in that race was absolutely nuts. I would've given up four laps before she did.

irck (Dec 22, 2018 at 6:53)
Neff definitely should have won. Surely it’s unlikelt that she did will be repeated at that level any time soon? I just think this has to be because nobody actually saw the race (even the readers poll places her last out of the candidates). m.pinkbike.com/news/pinkbike-awards-readers-choice-poll.html#cid2143077

piesforyou (Dec 23, 2018 at 2:32)
Yep. Jolanda came back from nowhere, gave it every last thing she possibly could and collapsed over the line. It's one of the greatest performances I've seen in sport let alone cycling. Robbed.

bikeinbih (Dec 23, 2018 at 8:14)
Yeah, I have never seen anything like that. Winning the race - and the title - after two flats in an extremely competitive field was absolutely nuts. Not taking away anything from Kate because her world champs performance was also fantastic but Jolanda was something else...

jfloren (Dec 23, 2018 at 15:27)
Neff's performance at La Bresse was awesome. But Kate's was at world champs, it was similarly awesome, and more unexpected to boot.

jclnv (Dec 23, 2018 at 18:12)
@jfloren: Not anywhere near as impressive and Neff etc were cooked after a season of battling at races where Courtney was nowhere.

dookiehill (Dec 21, 2018 at 8:38)
Wow. Possibly the first time everybody in the comments has been happy with Pinkbike's award decision.

Prof (Dec 23, 2018 at 18:28)
7 days prior to the world championships, the World Cup XC was decided at La Bresse. Neff, Batty, Prevot and Annika raced to exhaustion. Neff won the race and claimed the xc title despite suffering from several punctures - that to me was he performance of the season. I can't help but think Neff, Batty and Annika etc... were a little bit fatigued.... Well done Kate!! A well deserved win. UCi - sort out your race schedule

AidanSellars (Dec 22, 2018 at 7:29)
Gold for the golden state golden child, all gold everything. Well deserved.

twozerosix (Jan 3, 2019 at 10:31)
That's funny. It might be hard for people in the UK to believe, but yes, in addition to a rainbow jersey, she appears to have perfect teeth. Drinking water fluoridation in the Marin Municipal Water District may be mistaken for Photoshop.

bikeinbih (Dec 23, 2018 at 8:19)
Jolanda won the world cup title with a race that will be in the history books - she won the race with two flats. I think that was the performance of the year... or even decade.

jclnv (Dec 21, 2018 at 9:26)
Neff's ride in La Bresse pisses on this and every other MTB race result this year. And if not that race St Anne, where she won by two minutes.

rcrdrvr (Dec 21, 2018 at 12:46)
The fact that she was even up there to take that win is prob why she got the vote...quite the accomplishment even if Neff had an off day...I mean Neff is pretty much untouchable. From watching Kate a few years back this really is incredible...superb effort in the training to get there...inspirational!

pmhobson (Dec 21, 2018 at 10:49)
Personally, I'm a little skeptical of judged competitions, be it figure skating or slopestyle. Judges have biases and pressures. For instance, when scoring Rogatkin's run, the idea of handing him to the Triple Crown had to have crossed their minds. Cheating aside, race times don't lie.