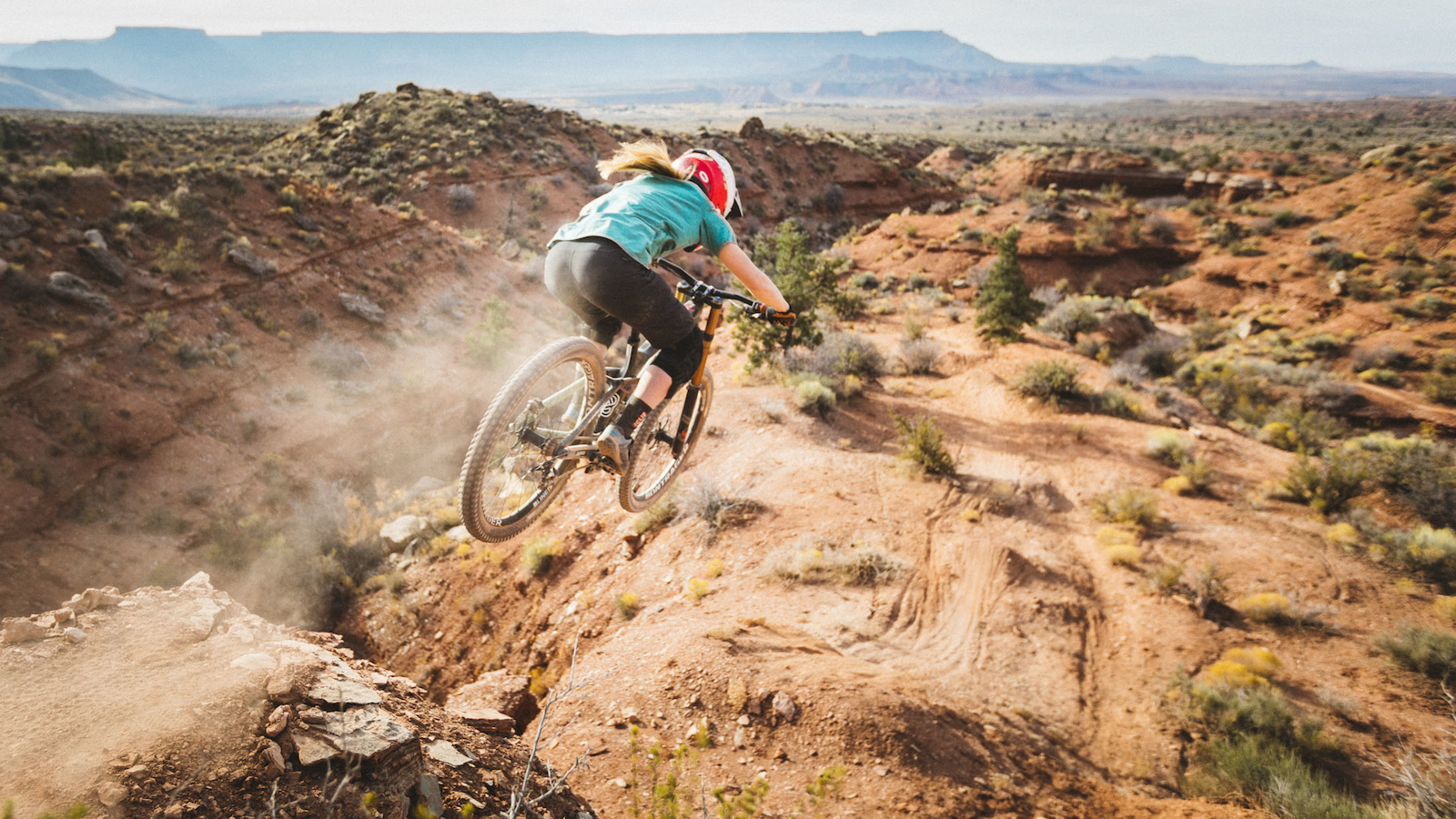 From racing, to freeride, to adventure—the women's MTB scene is more vibrant and badass than ever. Looking back at the past year, here are some of the notable moments.

Kate Courtney stands on the top step of the Elite podium at the international level for the first time, and it just so happens to be at the World Championships. Pinkbike's 2018 award for Best Performance went to Kate Courtney for her gutsy race in Lenzerheide. Watch the full race replay here. 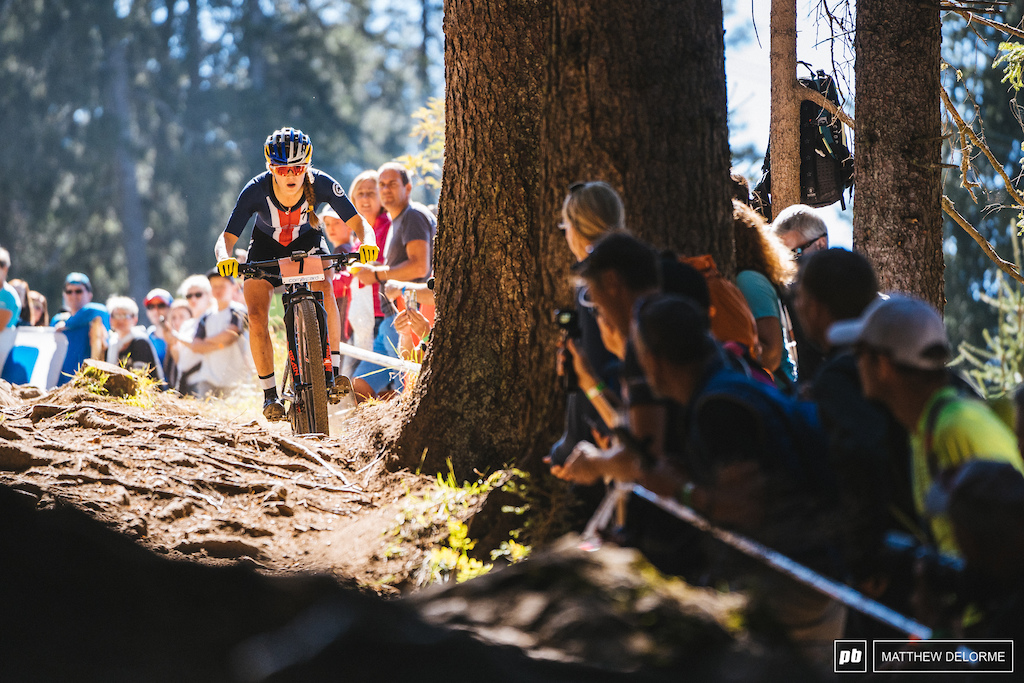 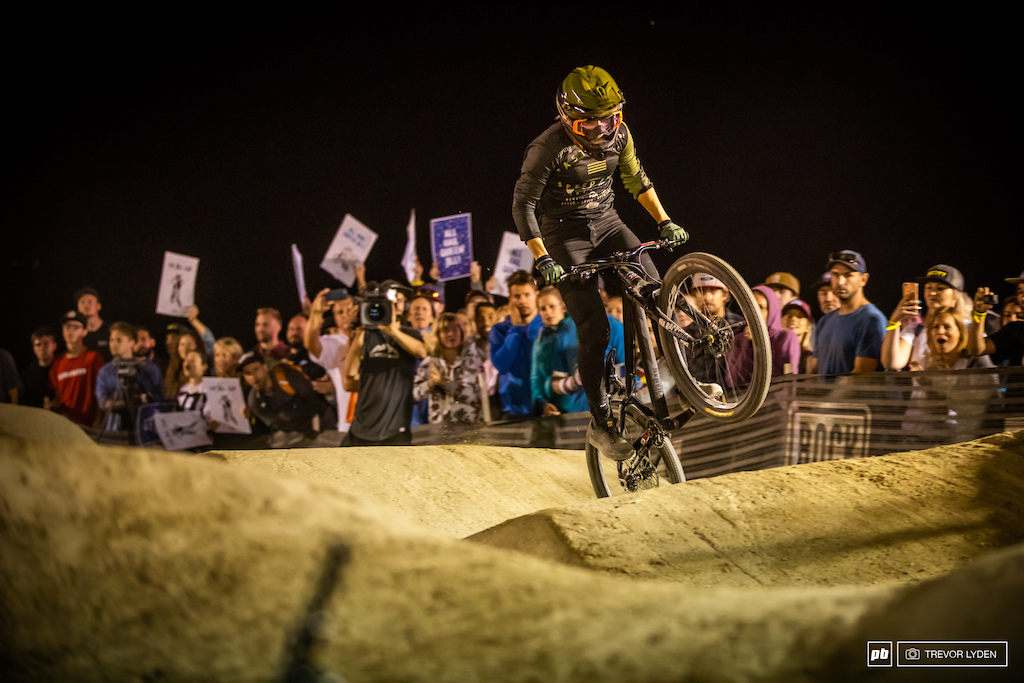 Caroline Buchanan comes back from a horrific injury car crash, having spent most of the season recuperating, to win the Pump Track Challenge at Crankworx Whistler. Jill Kintner is crowned Queen of Crankworx for the third year in a row, receiving equal prize money to her male counterpart. 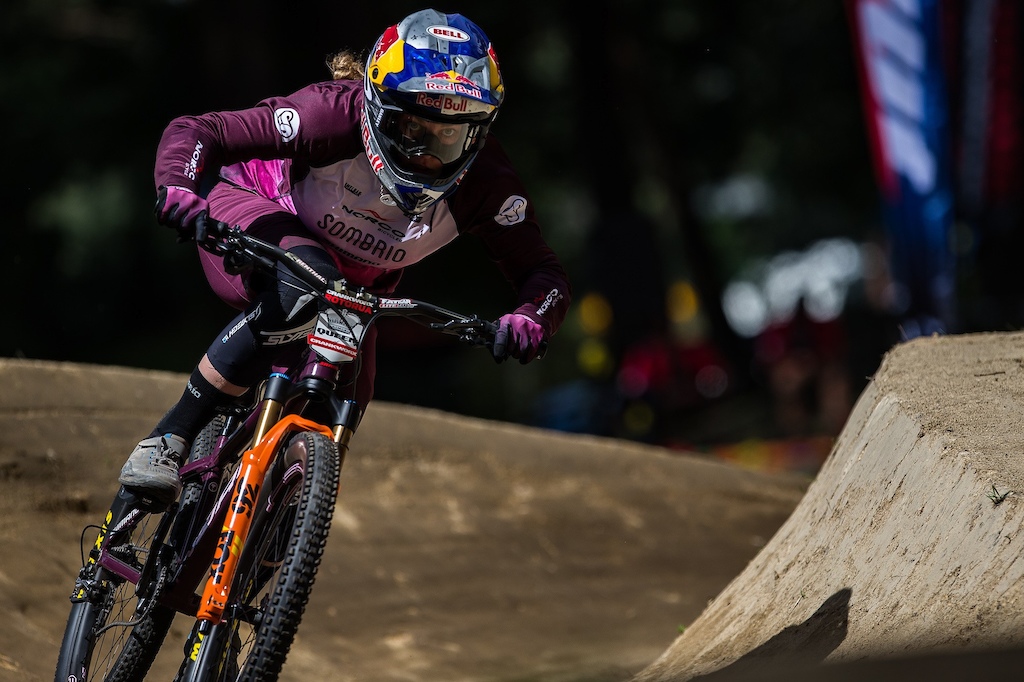 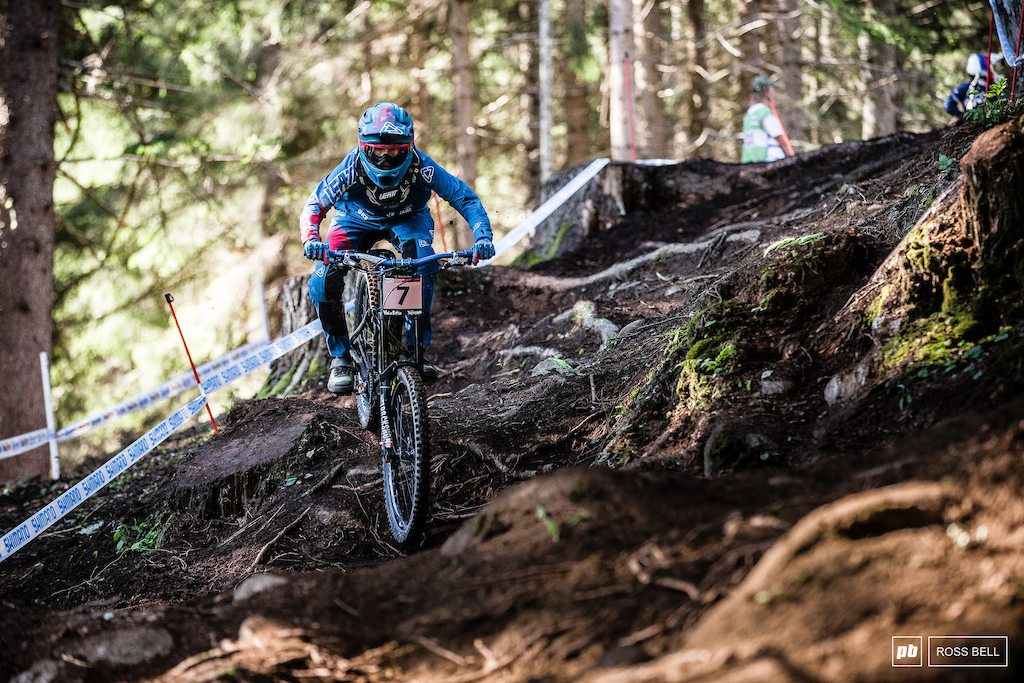 Unofficial privateer of the year in 2018, Monika Hrastnik, earns herself a spot on the Dorval AM team. The Slovenian rider turned heads when she grabbed her first podium in Leogang and backed it up with a third in Val di Sole. She ended the year fifth in the overall all while riding without the support of a full team. 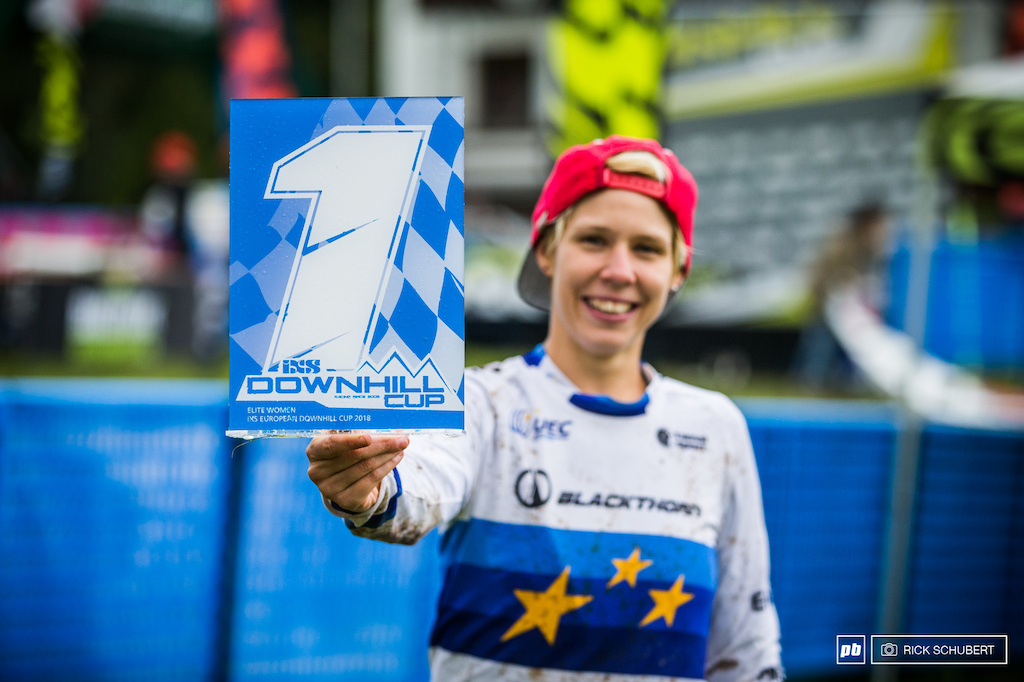 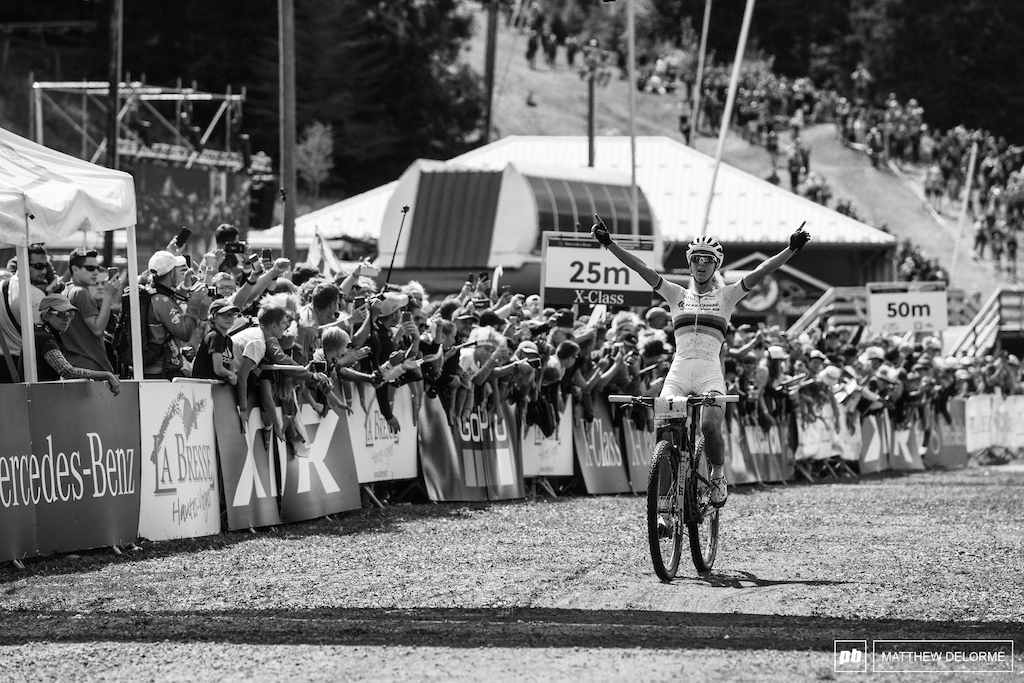 Jolanda Neff gets two flat tires in the La Bresse World Cup and comes back to win the race. Watching Neff, Batty, Prevot, and Langvad battle it out and change positions so many times kept us all on the edge of our seats. It was a true grand finale to an incredible season of racing. 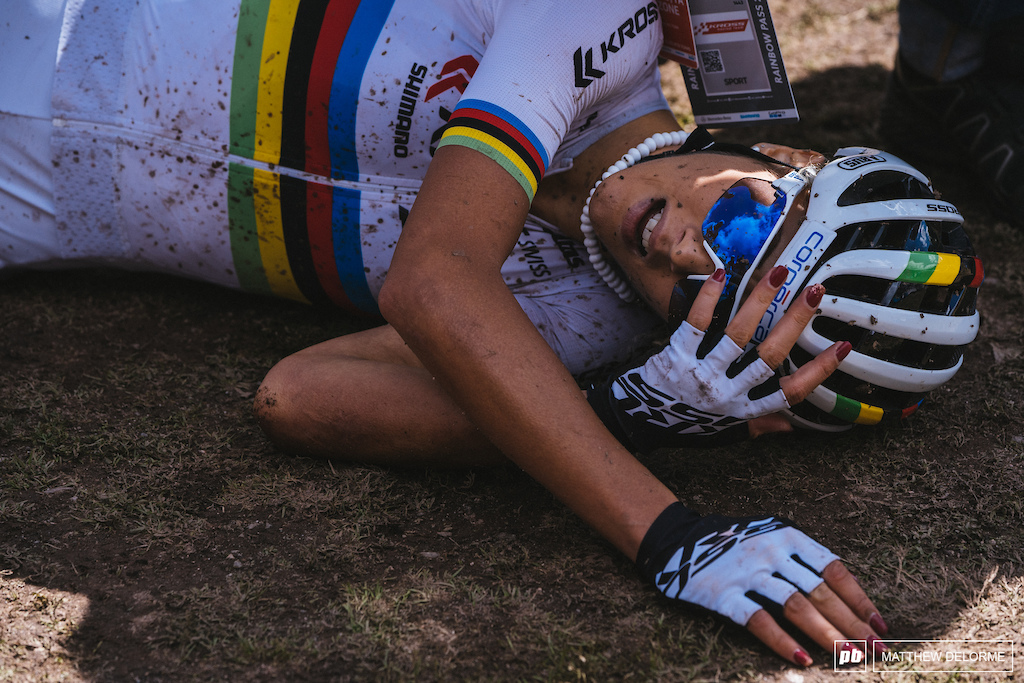 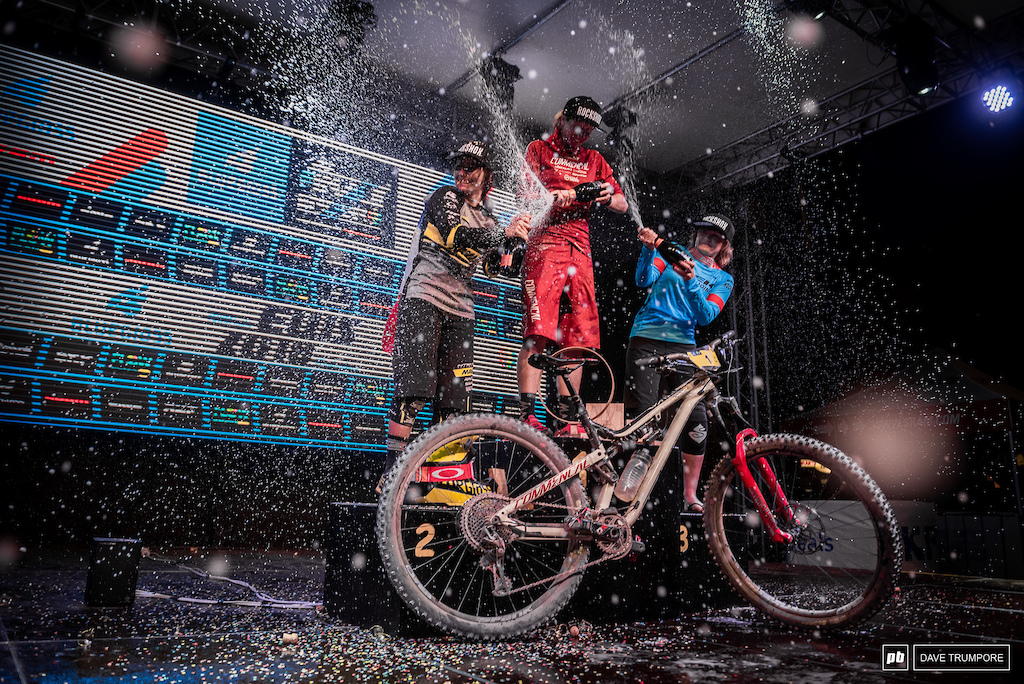 Cecile Ravanel has the perfect season, winning every round of the Enduro World Series. She wins the EWS overall, with Isabeau Cordurier in second and Katy Winton in third. Not only does she win every race, but she goes above and beyond to help Katy Winton when she suffered a flat in Olargues. We wish Cecile all the best with her recovery from her recent injury. 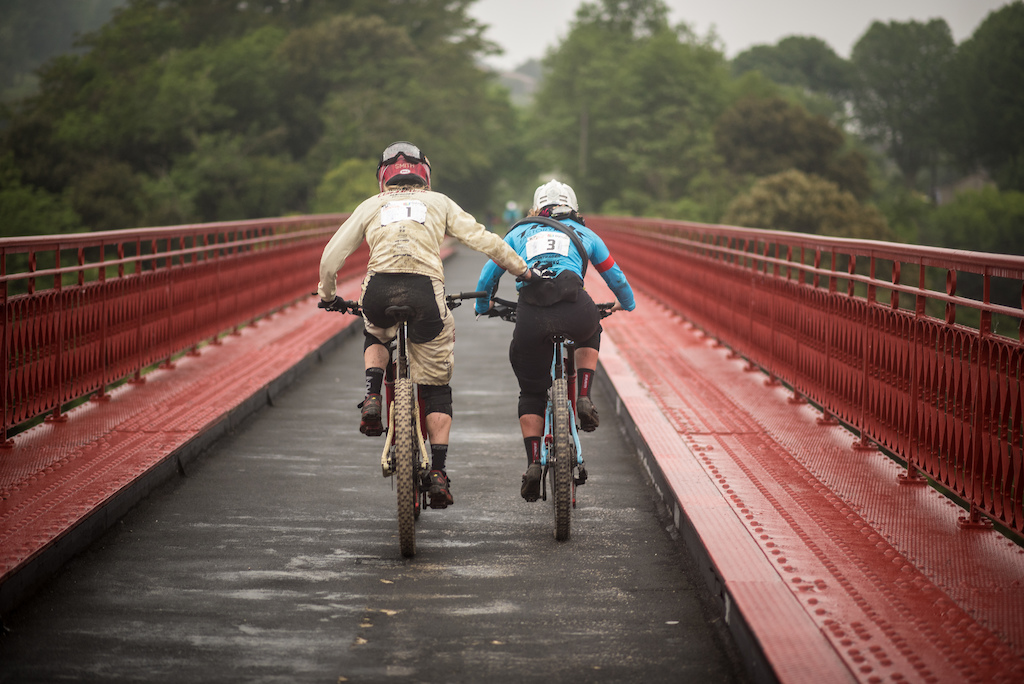 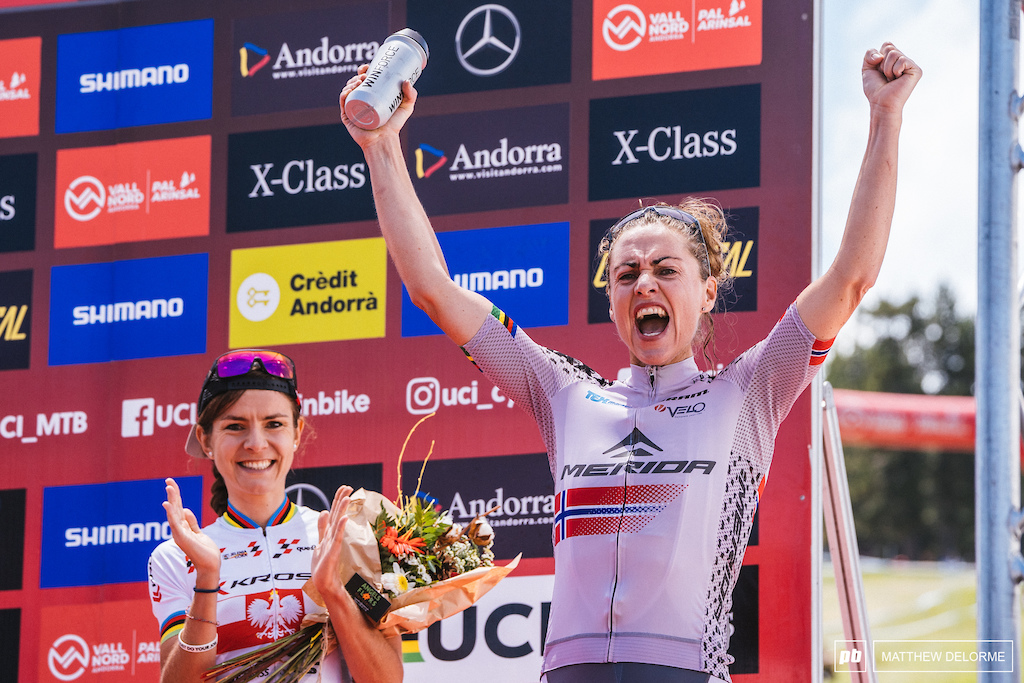 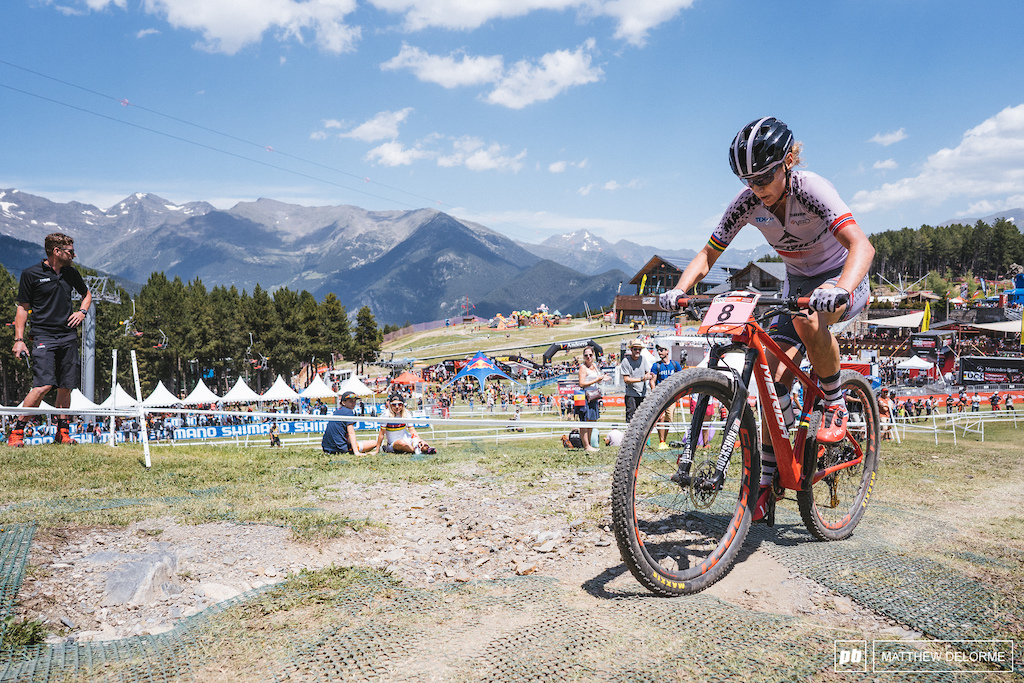 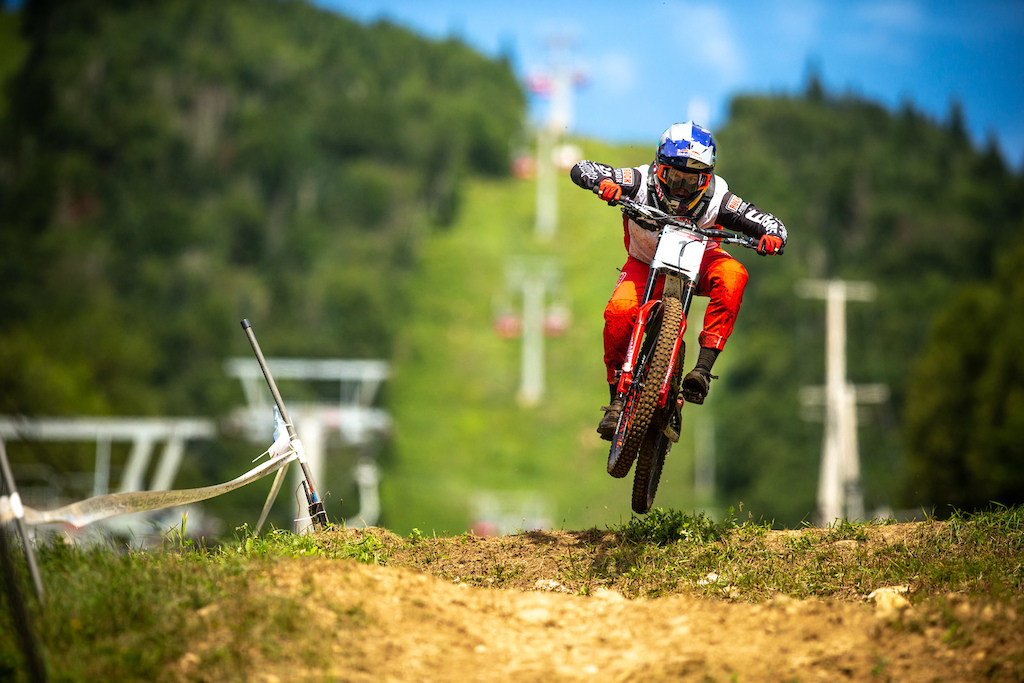 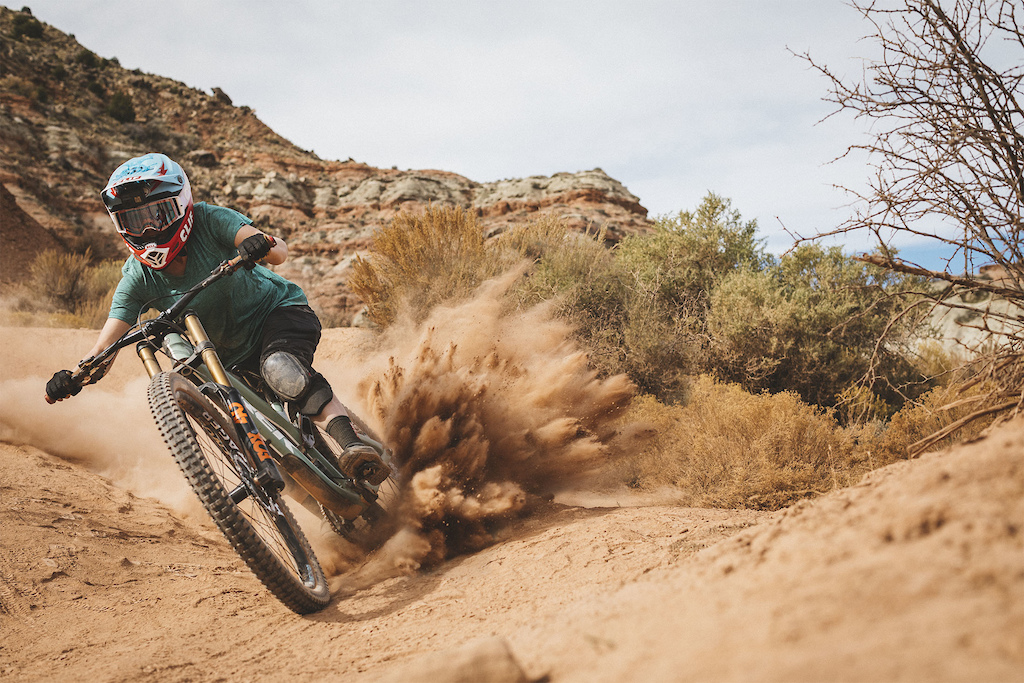 Casey Brown retires from racing and announces that she'll be focusing on Crankworx, content creation and freeride in 2019. Casey built for the first time Rampage this year but her first time attending was ten years ago. "I was seventeen and it totally inspired me and changed the way I think about mountain biking, so it's always been a huge inspiration to me. As for competing at Rampage one day, Casey said that she doesn't know if it will ever happen but "it's definitely cool to have a goal in life. If I never get into Rampage it's fine, all I really want to do is be good enough to ride top to bottom on one of these sites and send it as hard as the guys do. It could be a pipe dream, I don't know." 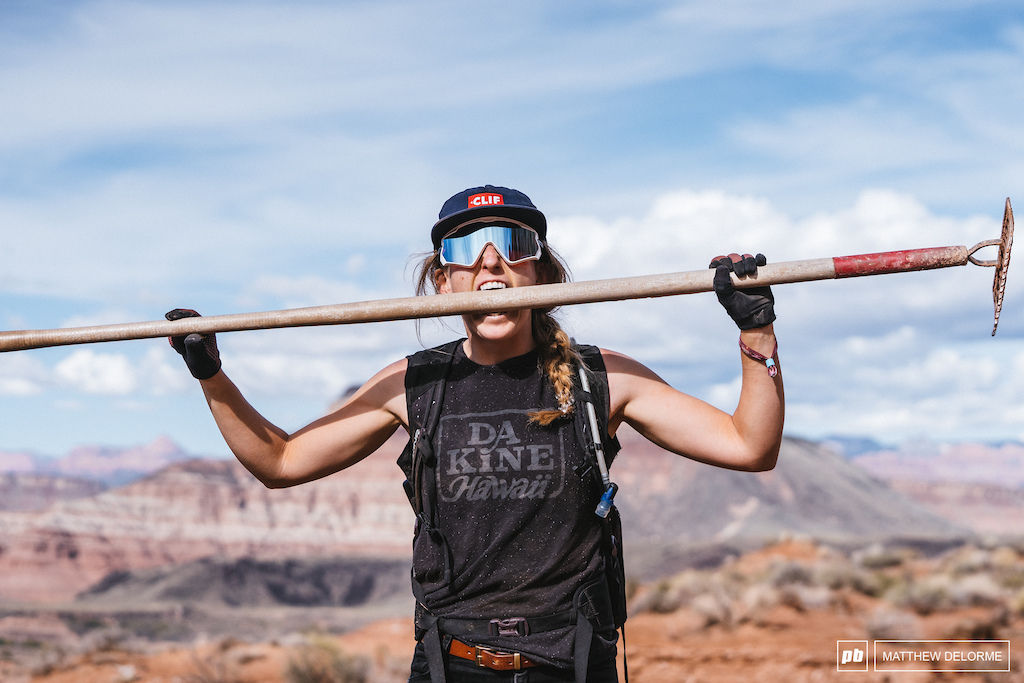 SOME OF OUR FAVOURITE VIDEOS FROM THE PAST YEAR

Watch one of the slickest female riders on the planet, Veronique Sandler, fly down Welsh trails in the latest episode of Sound of Speed.
ALN rides her hometown trails at lightning speed.

Miss Joey Gough - In The Shadows

Joey Gough straight sending it on her trail bike.
Brought up in near solitude within the New Zealand wilderness, Casey Brown and her brother kept themselves entertained by honing their bike skills with the aim of making it pro.
Rob Warner ventures into the wilderness of Wales for a candid encounter with one of the greatest downhill racers of all time, Rachel Atherton.


by konaworld
Views: 17,112    Faves: 37    Comments: 4
2017 DH World Champion Miranda Miller announces she will be focused on enduro in 2019.
The best XC MTB female athletes in the world including Jolanda Neff, Maja Wloszczowska, Emily Batty, Annika Langvad, and more, tell you why they love what they do!
As an artist and professional mountain biker, Micayla Gatto finds inspiration in her surroundings, be it at home in British Columbia, Canada or somewhere as distant as India.

What were your favorite moments from the past year? Leave a comment below and let us know!

ScandiumRider (Mar 8, 2019 at 9:35)
Oh good, an article celebrating women. I'm sure the comments will be chock-a-block full of wholesome comments. Oh wait, right, this is Pinkbike. Weird how the Venn diagram of MTBers and incels overlaps so much here...

stonant (Mar 8, 2019 at 11:06)
You’re gonna get downvoted into oblivion because you’re correct, and because there are loads of insecure incels and boys who hate their mothers on this website.

lehott (Mar 8, 2019 at 12:08)
lol everyone on pinkbike doesn't do well with esoteric philosophy, the cognitive dissonance is strong here!

WAKIdesigns (Mar 8, 2019 at 9:52)
@jrocksdh: he just shamed all the transgender athletes competing in womens field. He deserves all the negs.

dimitree (Mar 8, 2019 at 9:57)
Another day that separates us and will continue to keep bigotry alive.

krashbc (Mar 8, 2019 at 12:53)
What a bullshit thing to say. If you think everything is rosy in our "one big group" why don't you actually try listening to what the women have to say?

PS counterfactual are fun aren't they

lehott (Mar 8, 2019 at 11:07)
Wow you know we live in a gender oppressed society when institutions tell us what day to celebrate the opposing gender as if the oppression has been going on for hundreds of years. What if it was the other way around? What about Men's day? The rape and pillagers obtaining obscene wealth in the name of 'progress'. Women are superior than Men in almost every way. Give a women a house, she'll make it a home, give a woman raw ingredients and she'll make a dish of food, Woman intrinsically perpetuate universal growth. Why can everyday be a Woman's Day?

Diesel2007 (Mar 8, 2019 at 9:15)
This is gender bias. And does not do anything for gender equality. If there was an international mans day all the feminist would be in a uproar. I am all for gender equality but posts like this one aren't helping.

JohanG (Mar 8, 2019 at 10:44)
The worst gender bias is sport gender segregation. When are we going to let women off the plantation?

IntoTheEverflow (Mar 8, 2019 at 1:33)
Do we really need to celebrate half the earths population twice a year?

AlexSplode (Mar 8, 2019 at 2:03) (Below Threshold)
@IntoTheEverflow Know what you mean. It would be helpful if the male-ness of the industry was scrutinised on the other 363 days of the year. e.g. unless I missed someone Giant's Off-Road team is entirely male, but this attracted no comment.

IntoTheEverflow (Mar 8, 2019 at 6:25)
@makdthed: Oppressed brother? What are you on about?
I just thought we didn't need this day.
But judging the rest of the comments and how my comment was received, it is now apparent to me there is a real need in society to have one day to celebrate all women.

jclnv (Mar 8, 2019 at 7:39)
Yes because woman's rights aren't about equal opportunity, it's about preferential treatment. That's why woman have there own races and specific bikes etc.

fatduke (Mar 8, 2019 at 8:21)
@jclnv: Erm I think they have their own races so they can race the same track as the men thus having the same opportunity as men.

jclnv (Mar 8, 2019 at 9:20)
@fatduke: Yes women are free to join mountain bike races and they have their own catagory which I obviously fully support. However, they also have women's only races that I am not allowed to participate in due to being male. It's as sexist as the 1950's when there were men only events.

fatduke (Mar 8, 2019 at 10:01)
@jclnv: Noooooo not women only, that must be terrible for men who feel that they can't compete alllllllllllllllllllll those races I mean there must be so many.

jclnv (Mar 8, 2019 at 10:41)
@fatduke: There are three Enduro races in my area alone. The non women only events are over subscribed and sell out in hours. If equality and fairness was the goal wouldn't it be fairer to just allow everyone? 50/50 male/female entries?

The more you separate people the bigger the divide becomes. Funny enough all the teen and younger girls who race locally ride with the boys and think woman's only races are odd so hopefully the, sexist, empowering for insecure women, (which by the way is an insult to women who don't play that game) mountain biking movement will die out.

adybee7 (Mar 8, 2019 at 13:18)
@jclnv: As a organizer of one of these women's races I am ecstatic to hear that some of the local teen/younger girls think that women's races are odd - if they think that then we've done our job of encouraging more women to take up racing - in all it's versions. If there's no longer a market for women's races and more women are signing up for "regular" races then I'd be so stoked! The whole point of women's races is to help brake down the barriers to entry to regular racing - generally intimidation - and encourage women to get into racing. Yay for people on bikes!

jclnv (Mar 8, 2019 at 14:08)
@adybee7: All I think they do is perpetuate the myth that races are intimidating to women and that they require their own events.

If women are genuinely intimidated by men riding around the forest at varying speeds, and that they don't have just as much right to compete at whatever level they're at, their parents have failed them.

adybee7 (Mar 8, 2019 at 14:21)
@jclnv: Cool. Thanks for your opinion on women's racing. I recommend coming out to one of the events and talking to the women about why they find the events to be beneficial, because a lot of them do. We can go around and around about why some women are intimidated to race co-ed events, but we can definitely agree that on some level there has been a failure (parental? societal? other?) and we're just trying to help close the gap.

BenPea (Mar 8, 2019 at 15:29)
@jclnv: do you not think there may be a number of reasons why women may feel intimidated by big groups of men? Based on their day to day life experiences? You realise that *a lot* of men have been c*nts to *a lot* of women right?

jclnv (Mar 8, 2019 at 21:15)
@BenPea: Well that's not my wife's experience in her day to day life and I've personally never seen it in MTB'ing. I can hardly think of a more inclusive sport.