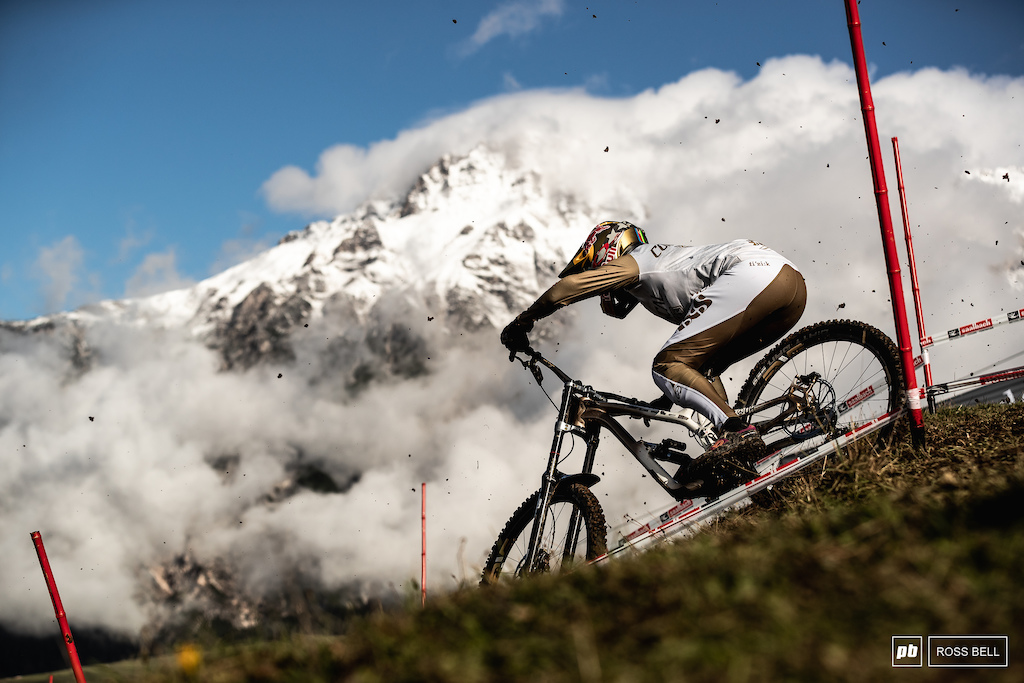 Leogang proved to be one of the shocks of the season last year. Riders rolled into Austria expecting the usual mix of high-speed straights and bike park berms but the course builders had other ideas. Instead of carving the second wall ride, riders flew into a steep, rutted woods section that finally utilized the incredible potential for technical tracks this mountain has to offer.

This section, combined with October Alpine weather resulted in carnage. We're used to riders being separated by milliseconds at this venue but instead, the field was blown wide open and staying upright was more of a priority than going fast.

Well, rain is forecast again this year. While that might mean an element of chance gets thrown into the results sheets once more, we've tried our best to predict who we think will be the fastest racers on Saturday. 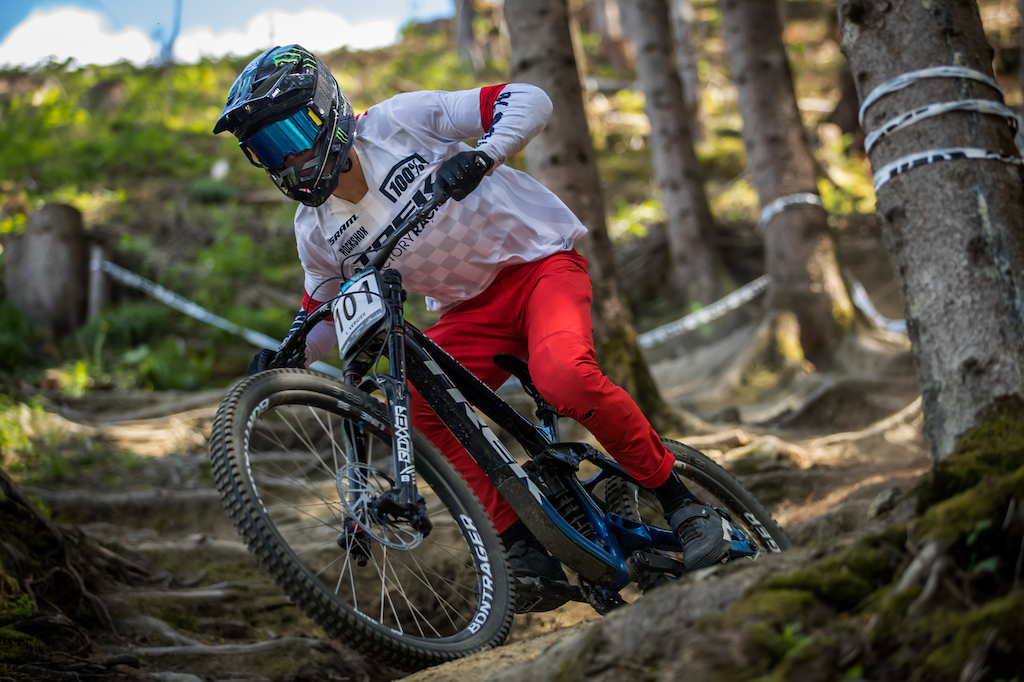 When Vital MTB took a survey of racers at the Schladming NotaRace about who would win in Leogang, one name cropped up more than all the rest - Loris Vergier. Vergier wasn't the most consistent racer in the truncated 2020 season but on his day he was probably the fastest. He took two wins in three days in Maribor and also topped the qualifying sheets for the first race in Lousa.

He made the move from the Santa Cruz Syndicate to Trek in the off-season and it's clear he has been able to slot into his new program with ease as he took the win at the Coppa Italia in Sestola then recorded consistently fast times at the NotaRace last week. 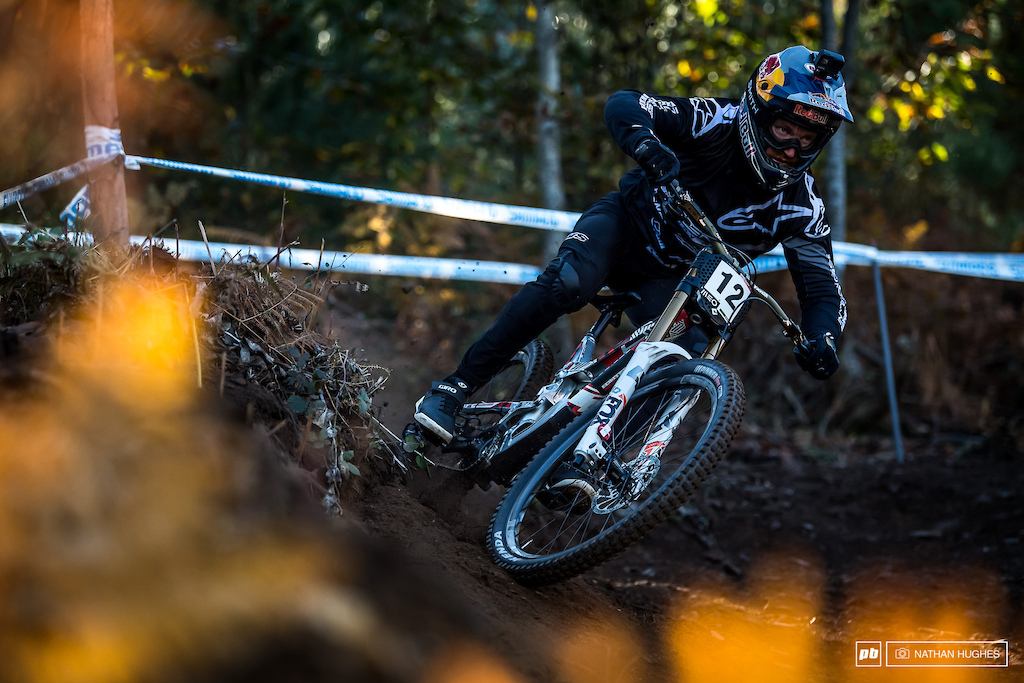 Simply put, there's no racer better at Leogang than Aaron Gwin. He's only been beaten on this track four times in World Cups and in all but one of those defeats, he still finished on the podium. The one time he didn't finish on the podium here he got a puncture, rode the course on his rim and still looked frighteningly fast. I mean, come on, he's even won here with no chain.

While it's true that Gwin's stint with Intense hasn't been his most prolific, it's probably also been the most disrupted period of his career. In 2019, he was dealing with pre-season injuries, stolen bikes and then a further couple of injuries as the year progressed, while last year COVID threw everyone's preparations out of the window. Despite this streak of bad luck, Gwin still has podiumed both years and for 2021 is coming into the year disruption-free. It's clear from social media that he's been testing and tweaking his bike thoroughly and this seems to be producing some strong off-season results. We wouldn't be surprised to see Gwin back to his best this weekend. 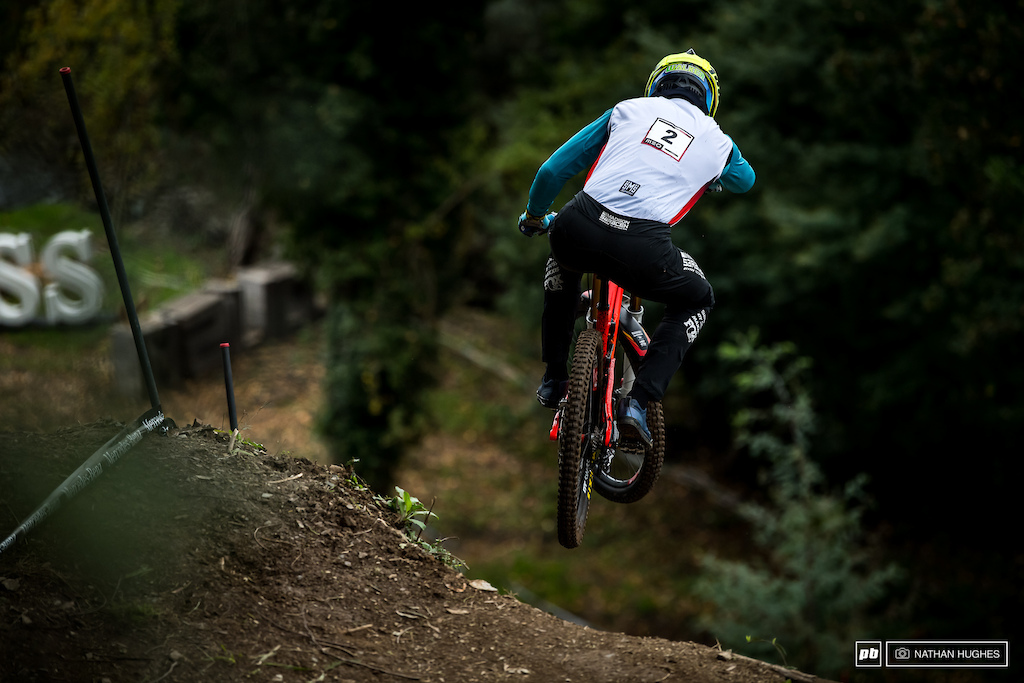 2020 may have seen Matt Walker take the title of the World Cup's Mr Consistent. In just three years since becoming an elite rider, he has shown that he has not only the relentless pace but also the mental fortitude required to be a regular name at the top of the timesheets.

Last year, Walker finished in the top five in qualifying and finals at every single race and took the overall title without ever winning either. Now, as the top rider on his team following the departure of Danny Hart, he'll be eager to continue that hot streak in 2021. 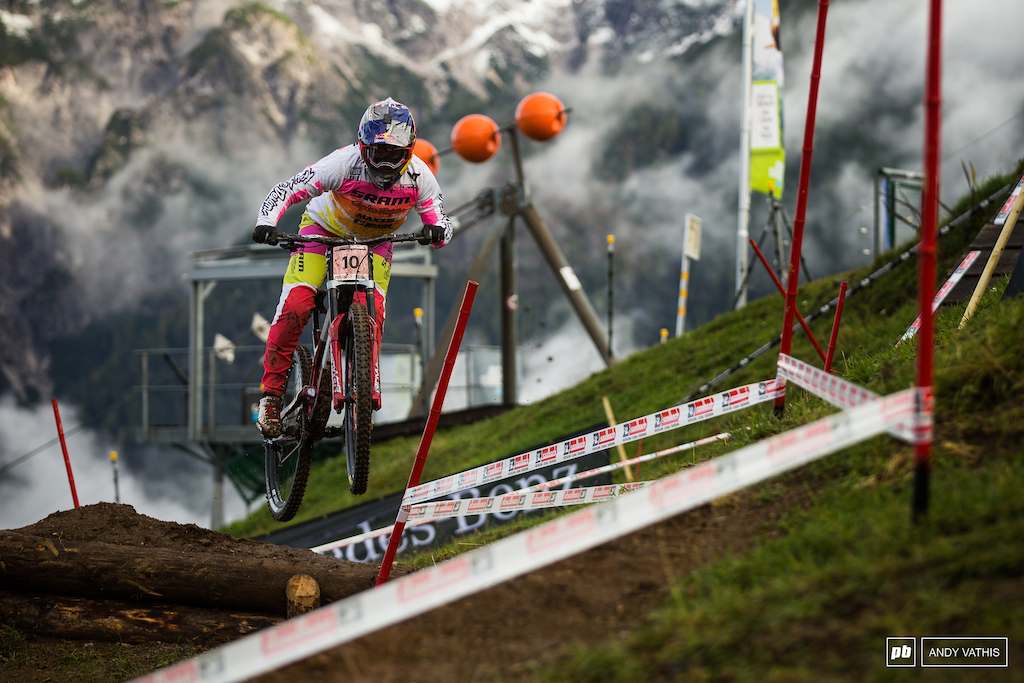 2020 was supposed to be the breakout season for Vali Holl. After two years of undisputed dominance in the Junior Women's category, this was her chance to show that she could mix it with the Elites too. Unfortunately, it wasn't to be. A nasty crash in practice saw her go over the bars on the canyon gap and that was the abrupt end of her season before it even began.

In 2021, Vali can press the reset button and try again. We've seen no evidence she won't be right up there once again and she seems to have settled into her new Trek set up as well. Don't be surprised to see a fired-up Vali aiming for redemption this time around in Leogang. 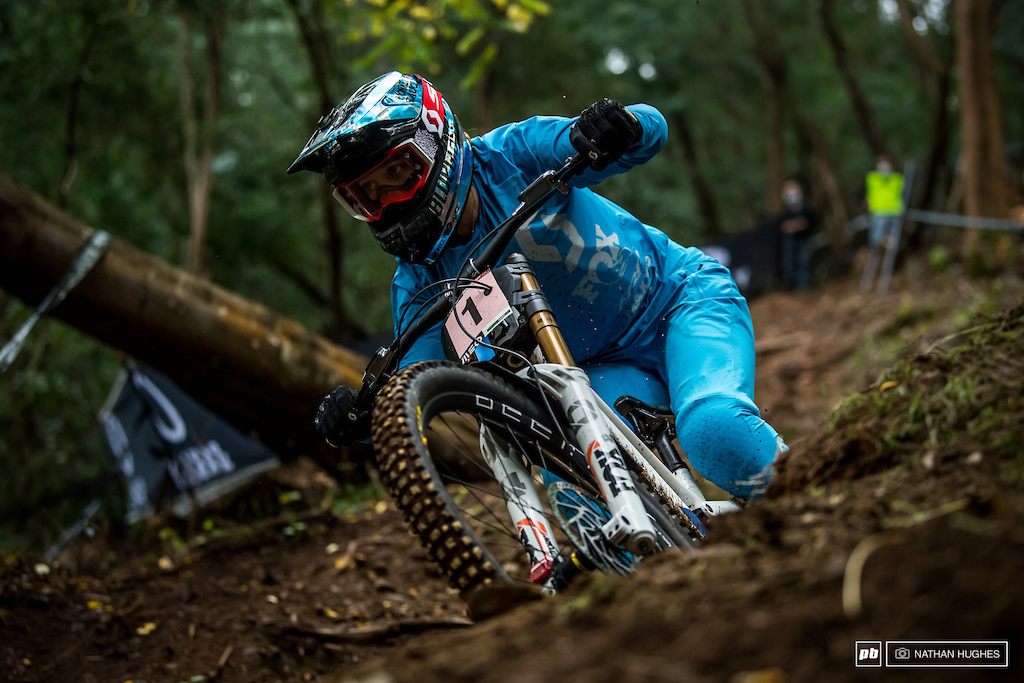 With two wins and two second places, Marine Cabirou was the pick of the bunch in the women's field last year. Despite battling through bouts of COVID earlier in the year, she took the overall at a canter with a lead of 50 points over compatriot Myriam Nicole.

This is a bit of an outside pick as Leogang has never been a favourable course for Cabirou and in fact, she's never finished better than fourth in her seven races here. What she will have on her side is a boatload of belief and strong pre-season form that includes a win at the Copa Catalana. Cabirou will be looking to get her title defence off to the strongest start possible so expect to see her near the top of the timesheet on Saturday. 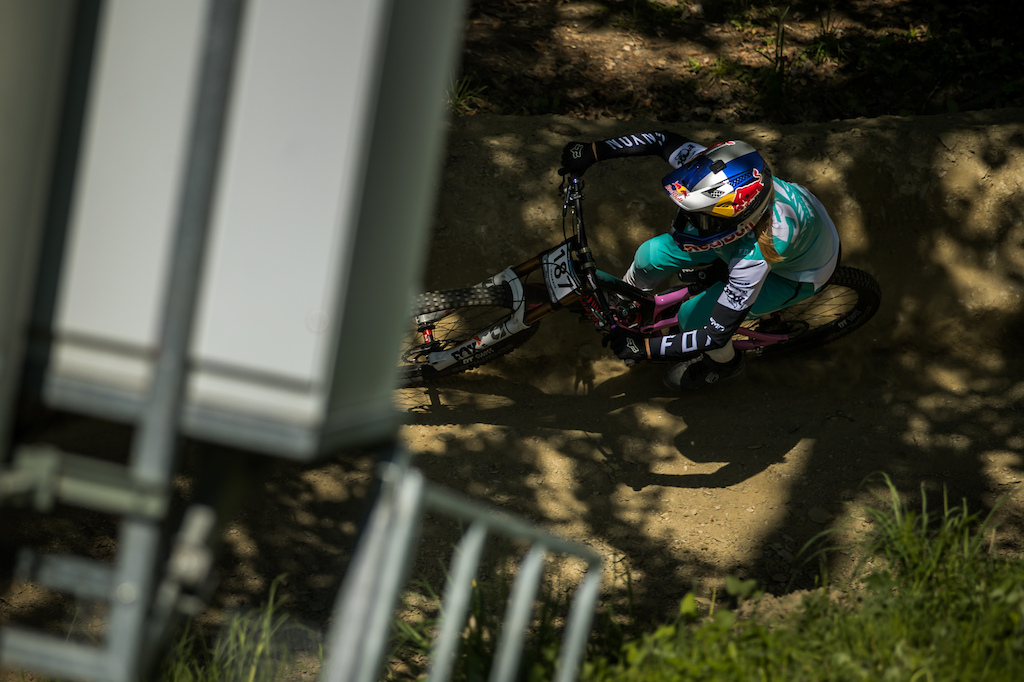 Tahnee Seagrave's last visit to Leogang ended in muddy misery like so many others but take a closer look at the splits and you'll see she was flying last year. She had a lead of more than 1.5 seconds through the top half of the track in finals, which may not sound like much but don't forget that the bike-parky nature of Leogang means that gaps here are usually razor thin.

Tahnee has previous success in Leogang too. She earned her first-ever World Cup win here in 2017 and has collected three other podiums at this venue too. After spending 2020 rehabbing from breaking her tibia and fibula, she'll be raring to go and fighting fit this weekend.

DoubleCrownAddict (Jun 10, 2021 at 6:59) (Below Threshold)
Cause you know one of the French racers is most likely gonna win.

bitterrooter (Jun 10, 2021 at 14:58)
@DoubleCrownAddict: wheres your pride. Gwin is back this year I can feel it!!! Dak is gonna kill it too!!! Shaw is going to convert some qualy results to race results. And Harrison is F as F. Freedom fries, and elevation loss i can't f@cking wait for some racing

mc-marshie69 (Jun 10, 2021 at 2:09)
Danny been looking crazy quick on the new Cube. Along with Bernard and even Joe Breeden. David Trummer brings his local knowledge from being Austrian along with Vali aswell. Reece would also be a favourite of mine but it’s between him and Danny for me. Looking forward to how timed training plays out. Can’t count out Pierron aswell

betsie (Jun 10, 2021 at 2:17)
I predict that you are right. I would love to see Joe do well, he is on a faster bike this year, injury free and a little under the radar. Reece has been filling his Insta with golf stuff then put up that video from Wales where he is clearly flying and looked supremely confident yesterday. Something tells me this is gonna be wet again so suit the UK riders. Then where is AP!!! nobody knows, but he can be a slow starter to the season. Vali is a defo for the womens, by some margin if nobody has any issues, she could clean sweep the season.

sandromatter (Jun 10, 2021 at 4:08)
Speaking of under the radar: I'm amazed that troy is always forgotten because everyone is so used to him getting a top result. He's finished every time on the podium in leogang in the last five years, except for last year at the world championships, being 8th. Maybe on a good day, he finally gets another win …

mc-marshie69 (Jun 10, 2021 at 4:11)
@sandromatter: looking at the weather conditions though I think he’ll struggle. It’ll be completely different to his conditions he gets in Australia. Depends if it stays dry or not

betsie (Jun 10, 2021 at 4:13)
@sandromatter: I think that Troy is a given for being right up there.
Will be interesting this year as we don't seem to have just the top 5 any more, its a growing list of who can do it on their day. I don't count Troy in that list, he is Mr consistent. Always the bridesmaid pretty much, but smiles though it all.

likehell (Jun 10, 2021 at 6:05)
@sandromatter: Ha, when Troy won in Ft William I was there, maybe I should visit Leogang on saturday. It's so good to have so many people that can win.. and I am rooting for all of them.
Ok, maybe for Greg a little more.

greendavid7 (Jun 10, 2021 at 2:01)
I think Bernard Kerr and Reece Wilson will be the guys to watch out for. Bernard has been on fire in Schladming and Reece wants to proof that he is worth the title. It is for sure going to be a banger race!

BigballmcCall (Jun 10, 2021 at 11:11)
@scott-townes: he’s been riding a ton in the southeast. There’s no shortage of wet and mud covered roots and rocks where he’s been.

pisgahgnar (Jun 10, 2021 at 11:17)
@BigballmcCall: Two trips to Windrock is not a ton. And we have been super dry this spring, dusty as hell until the past week.

WillisWeston (Jun 10, 2021 at 3:30)
Laurie Greenland is my bet for a dark horse contender, a lot of stars have been aligning for him coming into this season. So many potential winners, what an exciting race!

chakaping (Jun 10, 2021 at 6:14)
Don't see Leogang being his round, but maybe the rainbow jersey could stay in British hands with champs being at VdS again this year?

I'm going with Reece Wilson who has the motivation to show that he's got the "tricky second album" in the locker, Loris Vergier, cos well..... you've gott'a have a frenchie

As for the ladies would love to see Tahnee do well. Has she got her head screwed on after all those injuries? We'll have our answer come the weekend. Can't wait

doncouzens (Jun 10, 2021 at 6:43)
The wee little dark horse who has a fire in his belly is Jamie Edmondson, Ben Cathros prodigy. Now on the team with Vali Hol and the trek Rockshox backing I think the young guns have a point to prove. Part of my fantasy team thats for sure.

jpnbrider (Jun 10, 2021 at 7:23)
Last time we had a "normal season" Amaury Pierron and Bruni killed everyone at almost every event...
I would still pick them in the top 3

ridebikesyall (Jun 10, 2021 at 5:26)
They also appear to have neglected to carve her name in wood like all the past winners. They did the men’s winner for last year, but not hers. What gives? Why has she been forgotten?

Meganstuart1 (Jun 10, 2021 at 5:43)
Reece,Bruni and Antoine pierron for top 3 for me and hopefully Bernard Kerr because he deserves it and his videos are top class!

pisgahgnar (Jun 10, 2021 at 11:18)
We'll call it the Brevard Special. With a guest appearance from across the Tennessee border.

jamessmurthwaite Mod (Jun 10, 2021 at 1:58)
Riders start practicing today so expect one this afternoon along with timed training results.

Waldon83 (Jun 10, 2021 at 4:54)
@jamessmurthwaite:If you've read any of the comments here on pinkbike James, you'd know that timed training means everything.... EVERYTHING.

Endurip (Jun 10, 2021 at 4:39)
Strange predictions, at least to me. Gwin is so far from the top guys and it will take a lot of punctures from the top guys for him to com on top, unless it will be very dry on race day. I cannot see why Tahnee should beat Myriam, who is a much better rider.

doncouzens (Jun 10, 2021 at 2:00)
Pierron has been hitting the gym, looks like Wyn has as well, like Gregs approach where he just cranks out big gears on the road bike and does the stretchy yoga stuff, looks leaner and meaner which is often faster. Guys like Danny Hart seem to have gotten slower since bulking up in gym.