Pinkbike Primer: Everything You Need to Know Ahead 2021's First World Cup XC in Albstadt 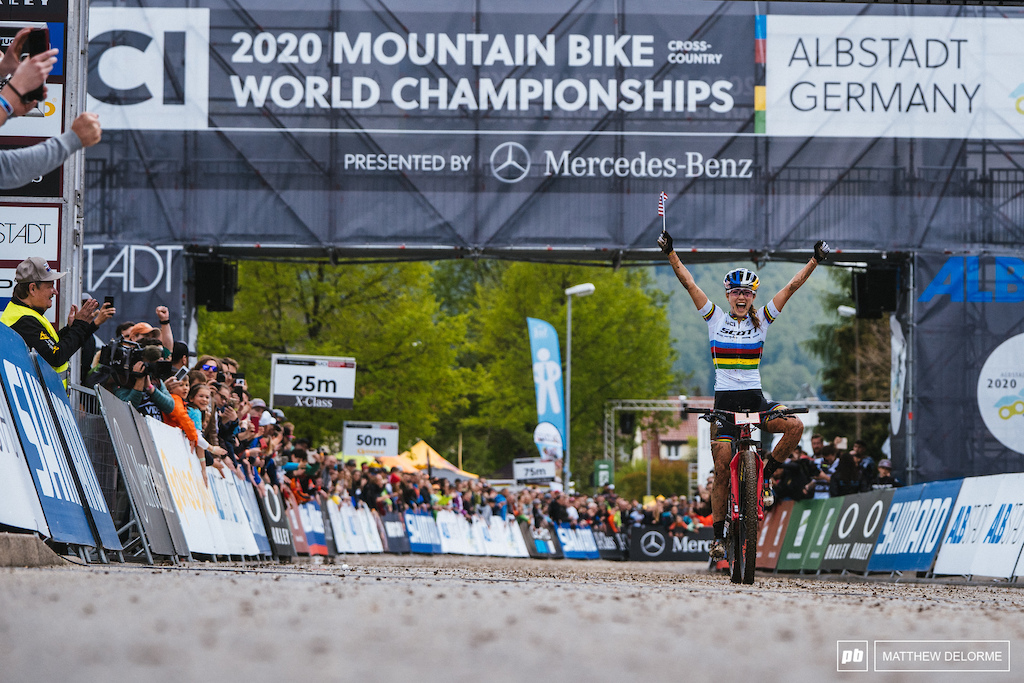 Here we are. After a long winter without racing and a long 2020 with minimal racing, Albstadt is back on the horizon for the first time since 2019. After the cancellation of the 2020 Albstadt XC World Championships, no doubt racers are excited to roll back onto the course.

We've also seen the postponement of the 2020 Olympics, which will have massive implications for the racers this year, assuming the rescheduled event takes place. The riders have been training hard through the winter and are ready to test themselves after the hiatus, and we're looking forward to seeing how the 2021 XC season opener shakes out.

The 4.1km course is more physically than technically demanding, and the organizers caused controversy in 2019 when they further sanitized the course after some nasty crashes in the muddy 2018 races. We expect that they've made more changes in preparation for the canceled 2020 World Champs, though we still anticipate the course being relatively smooth. It's a climber's course, combined with fast descents and minimal recovery time.

Albstadt has been a stop on the World Cup XC circuit since 2013. While the men's field has been mostly dominated by Schurter and Absalon, the women's races have been more varied, with only Jolanda Neff winning more than once at this venue. 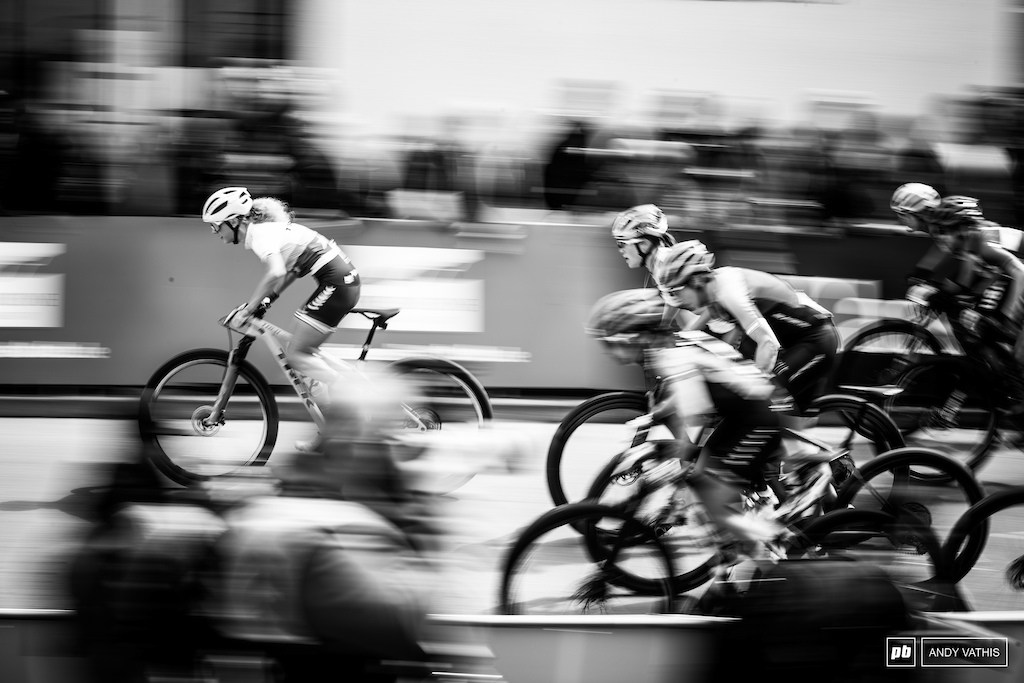 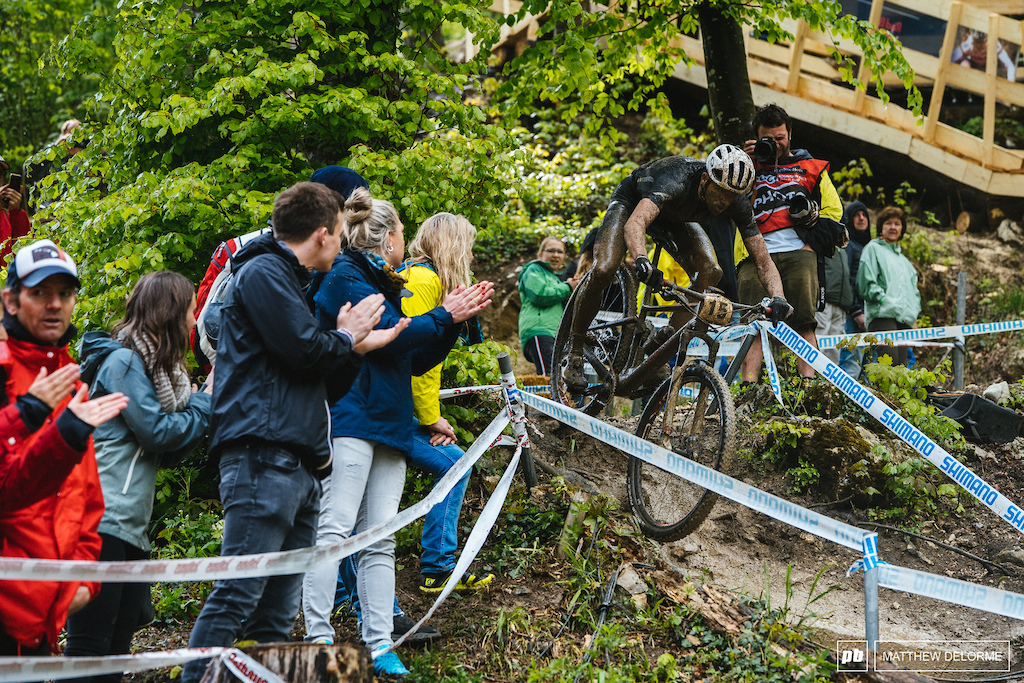 Weather forecast as of Tuesday, May 4. Live updates from Accuweather. 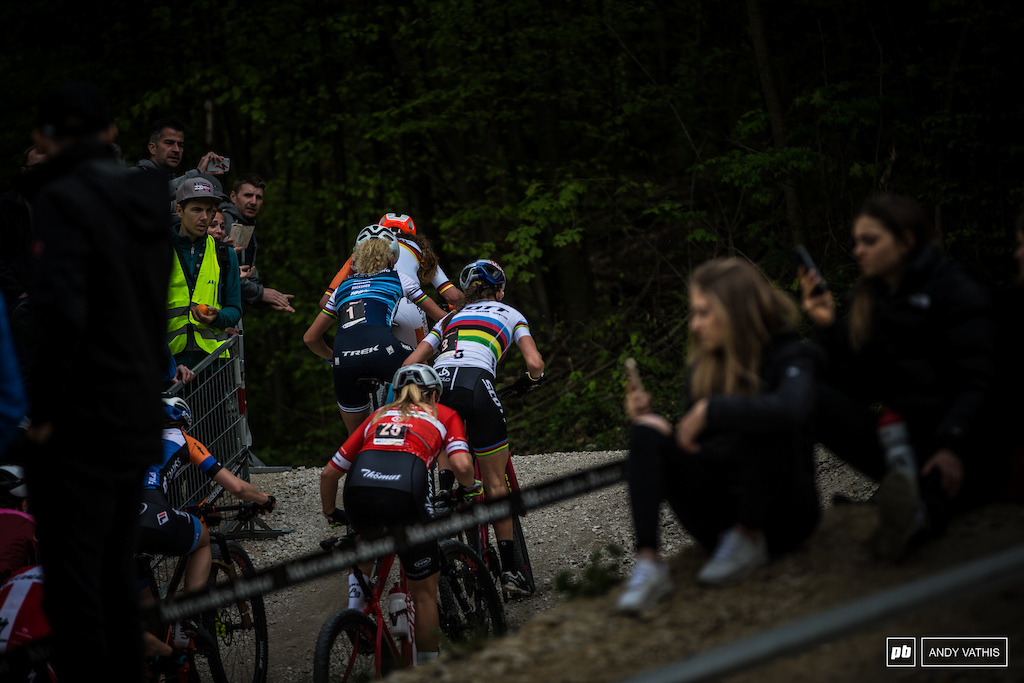 Note: All times are local and subject to change by the UCI/event organizer. 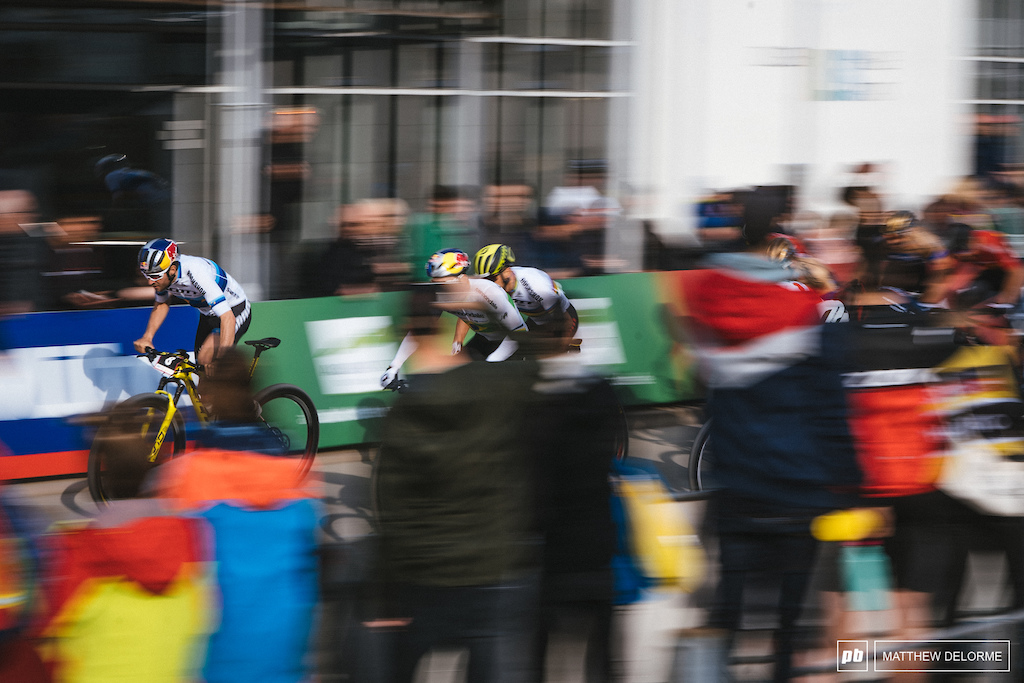 Tune in to Pinkbike to catch all the Albstadt coverage throughout the week. 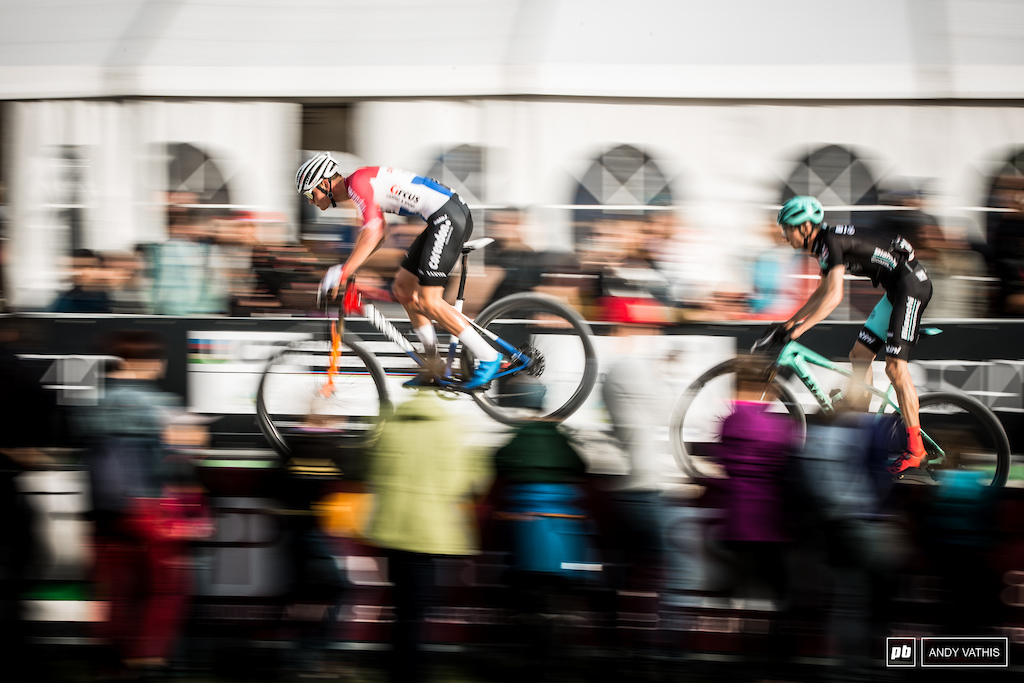 MVDP has a good chance of doing well this weekend.
I am excited to see Mathieu Van Der Poel on the start list. The Dutch multi-discipline star is shifting his focus to mountain biking for the time being despite having already collected some impressive results on the road bike this season. Anything could happen, but we know he at least has the power it would take to win this round. For silver, I'm picking Mathias Flueckiger because of his strong showing here last year. Mathias beat Nino in a battle earlier this year in Austria, and I think he could do it again. Rounding out the podium, I'm going out on a limb to bet on some young talent: Tom Pidcock. Pidcock took a commanding win last weekend at the first Swiss Bike Cup, gapping Carod by three minutes. The underdog U23 rider will be stepping up to mix with the big cats, and he'll want to prove himself. Although his start position won't do him any favors, I think he can get scrappy and fight his way to the front.

In the women's field, Kate Courtney took a solid second place at the Swiss Bike Cup, so we know she brought her A-game across the pond. We also know that after her World Championship victory in 2018 and the World Cup Overall title in 2019, she fell through the ranks a bit in 2020 and will be hungry to bring her best to 2021. Next, Loana Lecomte took a huge win at the third Internazionali D'Italia round this season and we very well might see her carry that momentum forward. For third place, Pauline Ferrand-Prevot has an impressive collection of rainbow jerseys and can clearly excel under pressure, which is what it will take to succeed this weekend with all eyes turned to the first 2021 World Cup race on a new bike and team setup.

gdumont (May 6, 2021 at 3:04)
Nino's dominance pre-2019 was a bit boring, 2019 got better with MVDP and Avancini, this year will be even better. The women's racing will remain as entertaining as it always was with plenty of competition, hopefully with Evie top of the podium soon.

Raikzz (May 6, 2021 at 3:19)
"The underdog U23 rider will be stepping up to mix with the big cats, and he'll want to prove himself. Although his start position won't do him any favors, I think he can get scrappy and fight his way to the front. Van Der Poel faced a similar task in his first race at Nove Mesto in 2017 and managed to battle past 81 racers to finish 10th, could Pidcock go even better on this climber-friendly course?"

gotohe11carolina (May 6, 2021 at 6:45)
Ungrateful sounding opinion here, but could we get the people not starting grayed out on the fantasy. It’s kind of hard for the more casual fans to find updated start lists.

ryansimonovich (May 6, 2021 at 6:53)
Ah, yes, the time of year when everybody on this website complains about Scribd

mrhedab (May 6, 2021 at 6:01)
So nice to see some of the big guns from road cycling on a MTB course. MVDP and Pidcock are some of the greatest in road racing right now, and it shows that XC is rellay something and it can compare whit is narrow-tyred cousin.

magnusc (May 6, 2021 at 6:21)
If you haven't seen MVDP and Pidcock on an MTB-course before you can’t have payed much attention to MTB-racing …

Starch-Anton (May 6, 2021 at 6:33)
@magnusc:
I'd argue that they're not pure road riders; they may ride on the road, but both of them are multi discipline racers - whether that be on the trails, in the field or on the road - and long may it continue.

mrhedab (May 6, 2021 at 6:40)
@magnusc: I´ll have but that was before Pidcock was a big name in road cycling. In 2019 he was only a name in CX. MVDP have allready been on stage for some yeas, and it is just great he still continues on the MTB. 10 years ago the road cycling often took over some of the talents in MTB like Peter Sagan or Jakob Fuglsang. Today they might stay with the MTB caused by the popularity (money). And that's nice!

magnusc (May 6, 2021 at 9:29)
@mrhedab: I might have misunderstood what you where writing. I also like that they (are allowed by their team to) compete in MTB-races when they do so well on the road. With the rise of these new multitalented riders I think the teams finally understand that it’s not all bad to do more than one type of bike-riding.

BTW, Pidcock is the U23 world champion in XCO.

Ricolaburle (May 6, 2021 at 13:25)
@usuusu: We'll know after Nove Mesto,not decided yet! For the women should be Pauline and Loana of course, big surprise otherwise.

GotchaJimmy (May 6, 2021 at 7:15)
Lecomte was mentioned in the predictions but excluded from the top 3 list lol

alicialeggett Mod (May 6, 2021 at 8:41)
Ah yikes, thanks for the catch. Obviously I changed my mind on the predictions haha

Ricolaburle (May 6, 2021 at 9:49)
@alicialeggett: Yes, but you still have a problem with Loana 'cause she's second int the predictions and third in the top list !

tgent (May 6, 2021 at 8:02)
Never watched an XC race before, but I sure as hell am now! The recap from last year looks insanely entertaining.

rcolavolpe (May 6, 2021 at 8:44)
I think Jordan Sarrou and PFP would have something to say about the 2020 World Champs being 'canceled'. They were moved to Leogang.

mbosko7 (May 6, 2021 at 8:00)
Are we dealing with the same issue last year of it being blacked out in the states and many other countries? VPN time again?

matthewemay (May 6, 2021 at 8:32)
Keegan Swanson's Instagram yesterday shows he's riding a Highball for this one.

wilsonians (May 6, 2021 at 5:32)
Yeah, its already been spotted at a couple of the Swiss cups or other races this year. Hasn't been announced yet though I don't think.

www.pinkbike.com/news/santa-cruz-teases-new-xc-race-bike.html
Below threshold threads are hidden

Madfella (May 6, 2021 at 11:10)
Super irresponsible holding this event in Covid times and putting everyone's lives at risk

ceecee (May 6, 2021 at 12:13)
@suspended-flesh: three nuns died and went to Heavens Gate. St. Peter comes out and says, "before you can enter the gates of heaven you must answer me this one question: what part of your body last touched a man's genitals?"

The first nun steps up and says, "well, I used to work in an orphanage with babies and sometimes my fingers might touch the baby's penis while changing diapers."

The second nun steps up and says "Well, that's the reason I became a nun. One night I was walking down the street when a man grabbed me from behind, pulled me in the bushes and put his manhood into my rear end. It was so upsetting I decided to join a convent."

St. Peter says, 'you poor woman, what a traumatic ordeal. Go sit in the Holy Water and welcome to Heaven."

With that the third nun starts walking away. "Where are you going," asks St. Peter.

The third nun replies, " if you think I'm going to gargle after she sits in the Holy Water, you're crazy!"