Pinkbike Primer: Everything You Need to Know Ahead of EWS Pietra Ligure 2020 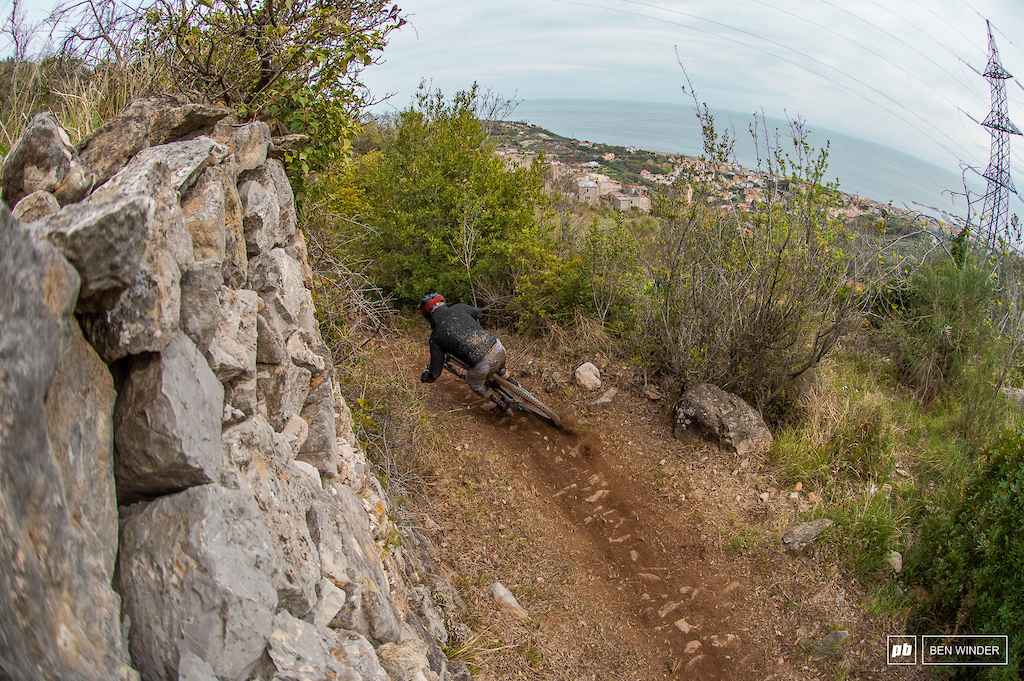 And just like that, the end of the EWS season is in sight. Pietra Ligure will be the penultimate round of this year's race series with the traditional finale coming in Finale next weekend. Pietra Ligure stepped in at the last hour in August to provide another round for EWS fans and it makes its EWS debut this weekend.

As a new round on the calendar, it should be a level playing field for all riders across the field and with only one round to go after this and no World Championship at stake, we can expect riders going hell for leather to get as much as possible out of a truncated season. 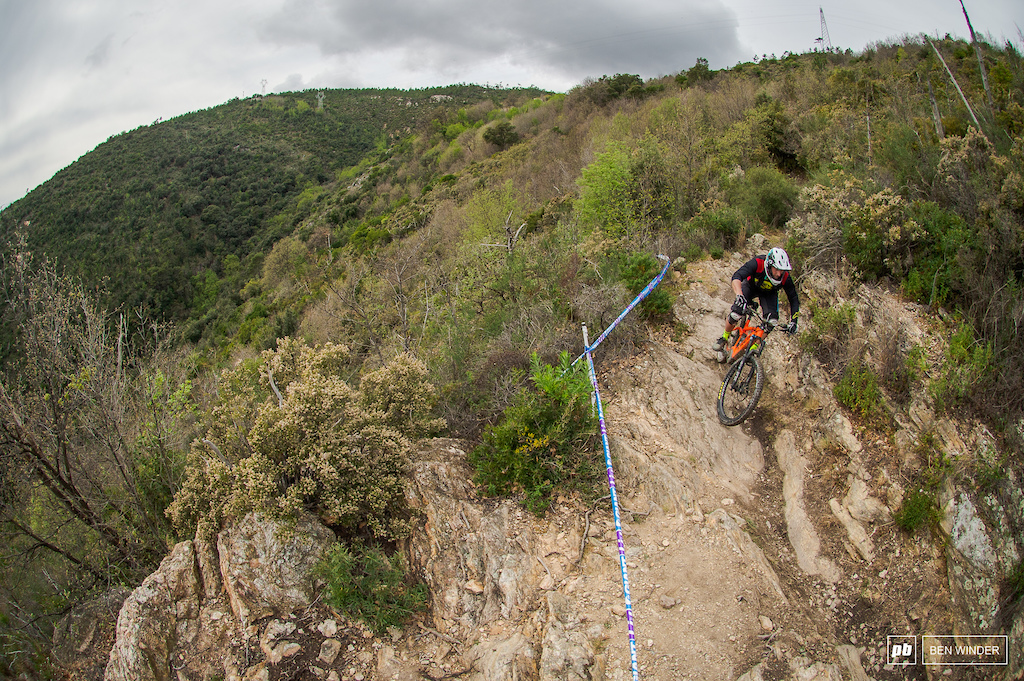 The EWS hasn't visited Pietra Ligure before but it might look pretty familiar to race fans as the town sits just 5km down Italy's Ligurian coast from Finale Ligure. It boasts the same beautiful Italian coastline, historical architecture, food, mountains and most importantly, friendly, easy-going Italians. Bolstered by its proximity to one of Europe's riding hotspots, the scene in Pietra has been growing steadily over the past few years and it has been a venue at the Superenduro series over the past 2 seasons.

Expect the same mix of tight, rocky, dusty trails with a dip in the sea and some gelato to finish the weekend off. 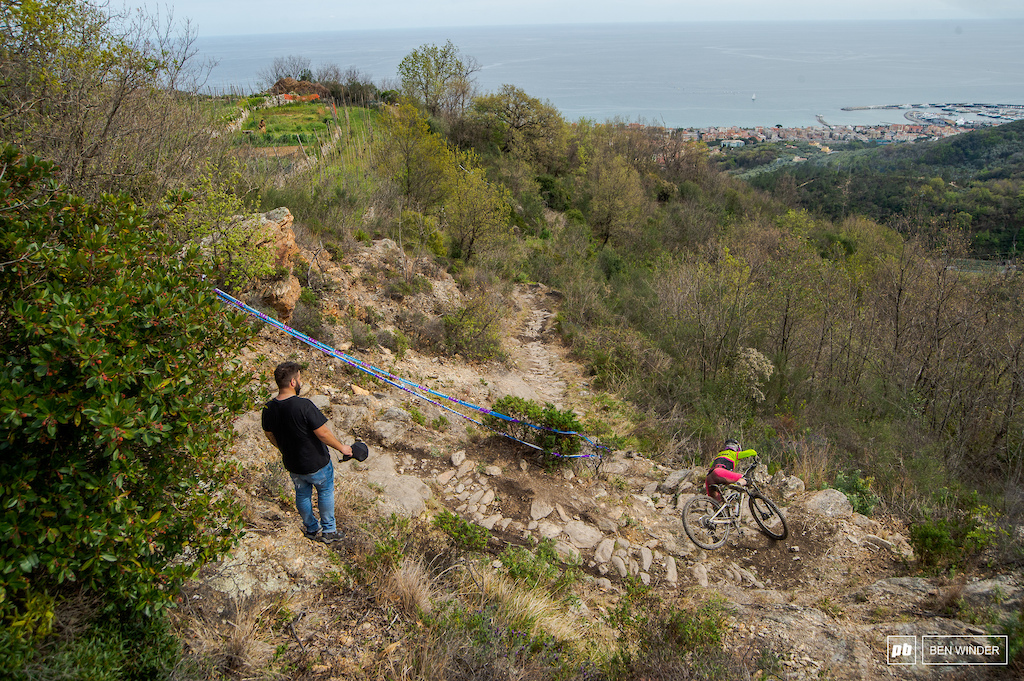 Pietra Ligure will be another one day race with 5 stages for riders to test themselves against. The course is 50km long with nearly 2,000m of climbing and descending across the day. This will all be done on the bike with shuttling allowed on the practice day on Friday but nothing on the Sunday race day. 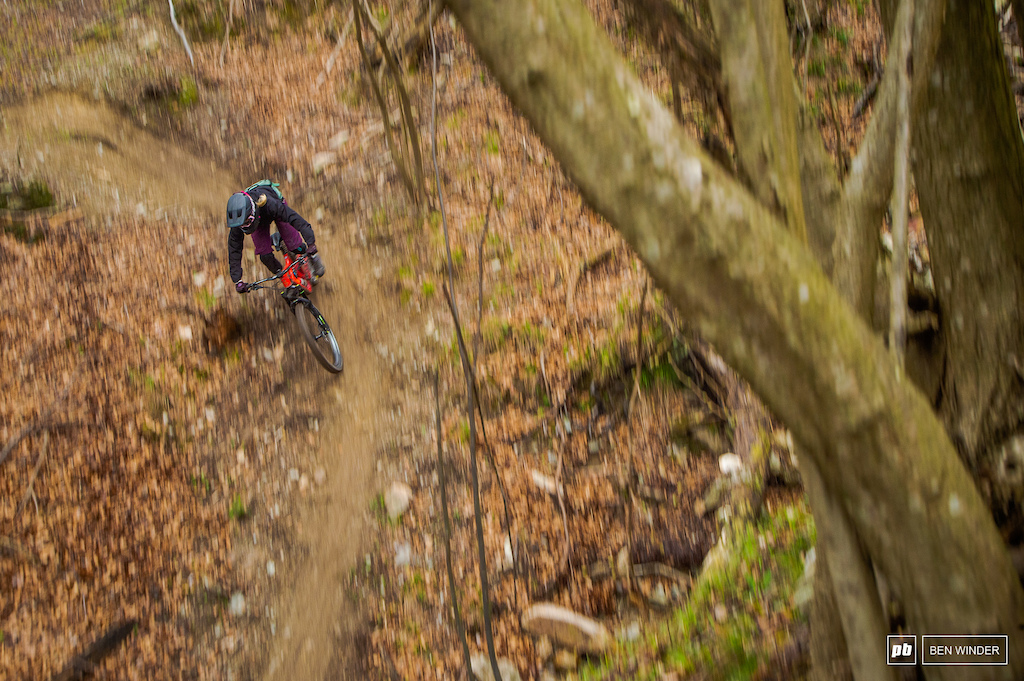 Weather forecast as of Tuesday, September 15.
What Happened Last Round? 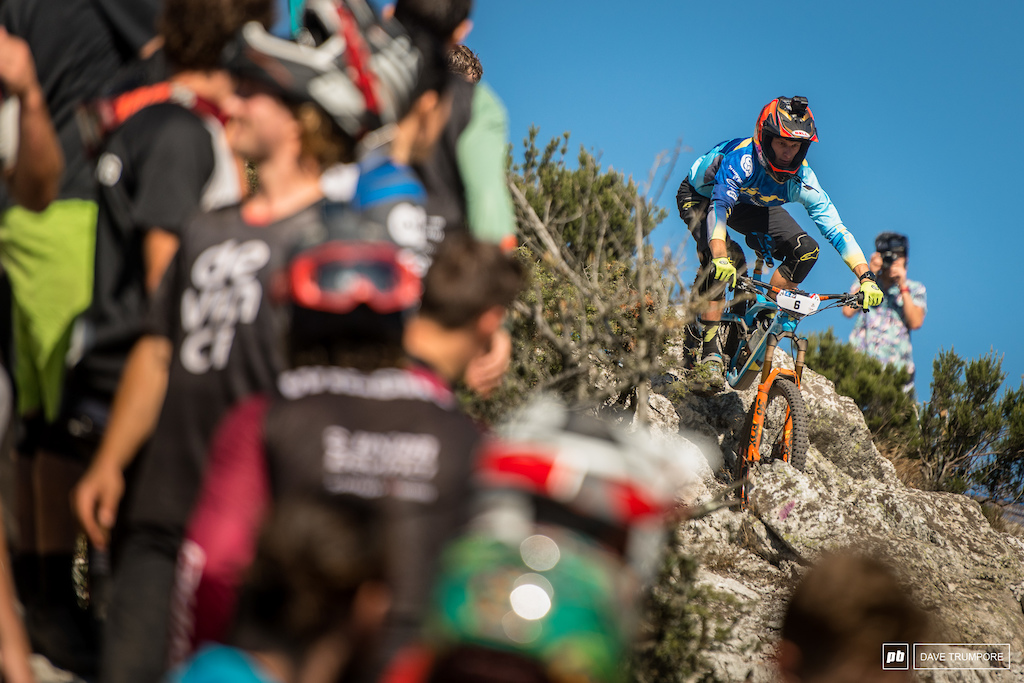 Martin Maes - I'm sticking with Maes again as my winning pick for round 2 after he finished just 4 seconds off the win in Zermatt. Maes has shown winning form on this coastline in the past and dragged an inexperienced Belgian team up to fifth in Finale at the Trophy of Nations last year. Maes has been racing in Liguria since he was 16 and will be able to draw on all of that experience this weekend at the new venue.

Jesse Melamed - With 3 weeks of racing already under his belt thanks to the Crankworx Summer Series, Jesse Melamed clearly came into the season with the best from and there's no reason he won't carry that through this weekend. Expect Jesse and Martin to battle it out again for the win this weekend.

Jack Moir - I think Jack Moir could be the surprise package this weekend as he continues his first full EWS season. With this being a new venue for all the racers, he won't be at a disadvantage to those who know the trails better. On top of that, the dusty, rocky conditions are likely to suit him far better than cold and wet of Zermatt, where he finished 4th. 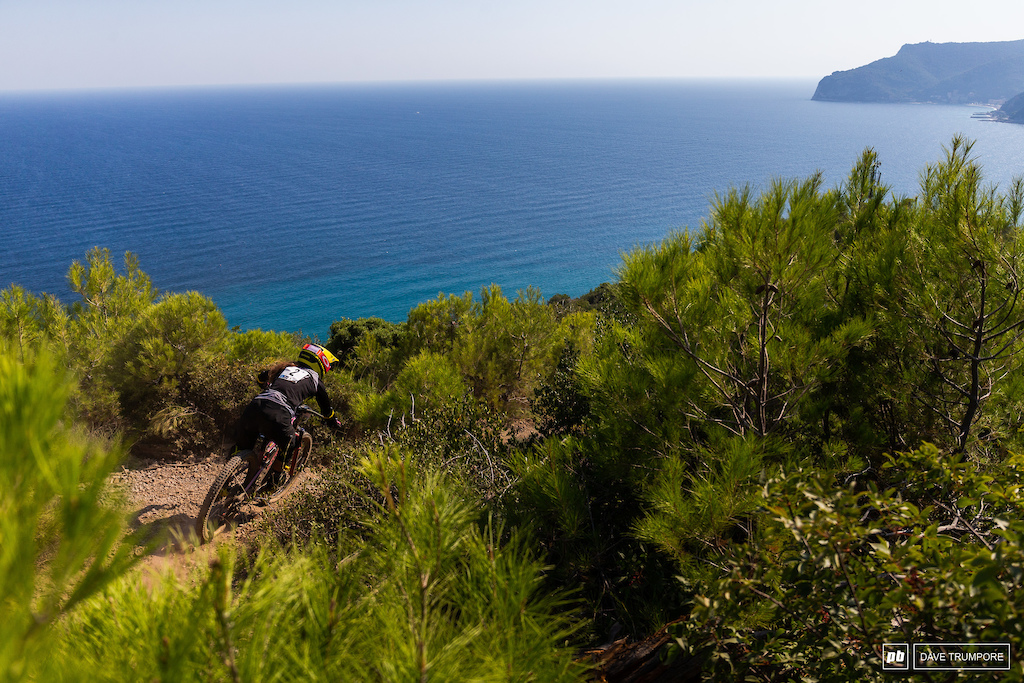 Isabeau Courdurier - With Cecile Ravanel still not racing, it's hard to look past Isabeau Courdurier continuing her perfect streak in enduro racing. She's coming off an ankle injury and she has never won an EWS race in Italy, but she led France to a handsome comeback victory in the Trophy of Nations just down the coast last year.

Morgane Charre - Charre was the only woman to get close to Courdurier last time out in Zermatt as she finished second to her compatriot in both stages and was only seconds back at the finish line. These two women showed they are the pick of the field so far this season and will likely continue to be in Pietra.

Noga Korem - The Israeli rider had a nightmare in Zermatt after a malfunction had her off the bike and trying to fix her derailleur in the middle of the track in stage 1. She was able to regather herself in the tech area though and went on to grab third in the final stage. She'll be heading to Pietra with redemption on her mind and will be in with a great shot of a podium finish.

suspended-flesh (Sep 17, 2020 at 9:08)
@LaurensVR: While both gelato and ice cream contain cream, milk and sugar, authentic gelato uses more milk and less cream than ice cream and generally doesn't use egg yolks, which are a common ingredient in ice cream. ... Meanwhile, Italian gelato includes only about 4 to 9 percent fat.

powturn (Sep 17, 2020 at 23:52)
@LaurensVR: Nope, not so fast. The biggest differentiator between gelato and ice cream is the amount of "overrun" - which is to say how much air they mix in to the final product. In other words, traditional gelato is denser than most ice cream. Yes, ice cream tends to have a higher fat content, but if you are eating bargain-brand ice cream w/ 100% overrun, it is 50% air, and thus the same sized portion of gelato will be more caloric, both in terms of sugar and fat content.

giopk70 (Sep 17, 2020 at 13:41)
Noone in their sane mind would ever call Ligurians friendly and easy-going. Source: I'm Ligurian, we are very well known in Italy for how grumpy and unfriendly we are, especially with tourists. Probably you don't get it 'cause you don't understand Italian.

powturn (Sep 17, 2020 at 23:58)
Friendly & easy going are relative. Compared to the neighboring Swiss and Austrians, or for that matter the English & Germans, all Italians are both easy going and friendly.

jamessmurthwaite Mod (Sep 17, 2020 at 5:04)
@vapidoscar: The start list isn't being published publically this round, we're assuming that will be the same next weekend too.

vapidoscar (Sep 17, 2020 at 5:20)
@jamessmurthwaite: thanks for letting me know. That will save me a lot of time that I planned to search later.

diegosk (Sep 17, 2020 at 9:37)
@murfio: if I had to guess, probably liability associated with contact tracing and covid.

Rideuse67 (Sep 17, 2020 at 5:29)
My money is on Morgane Charre for the win! She just won the french "worlds" championships last week. She'll be surfing this success.

preach (Sep 17, 2020 at 7:03)
the dirt to rock ratio on that trail looks like it will make for outstanding sketchiness.

chriskneeland (Sep 17, 2020 at 7:24)
Even with a lot of riders not at the events there are enough top guys to keep things exciting.

GotchaJimmy (Sep 16, 2020 at 15:22)
Sven's course preview will be all-time
Below threshold threads are hidden

Sethimus (Sep 17, 2020 at 5:17)
look, a butthurt american. vote right next time to avoid situations like at the moment, when no ones welcomes americans.

preach (Sep 17, 2020 at 7:12) (Below Threshold)
@Sethimus: You realize it was the democrats that were frustratedly condemning the president for cutting off international travel back in March...and also encouraged people to get out and celebrate chinese new year in the streets of NYC en masse...Inconvenient for your narrative I know...but...

cvoc (Sep 17, 2020 at 7:32)
@Sethimus:
To be honest, until last week I wasn’t allowed to go to Belgium either. Together with Luxembourg it was declared a red zone by the Swiss government. So basically the same status as the US.

NorCalNomad (Sep 17, 2020 at 7:42)
@Sethimus: Lol the only thing I'm butthurt about is how the Trump administration f*cked everything.

Sethimus (Sep 17, 2020 at 8:54)
@preach: so you think a ban on travel for chinese, without testing the returning americans, was effective? are you a comedian in RL?

Sethimus (Sep 17, 2020 at 9:24)
@preach: afaik the us let in americans from abroad for several weeks, without testing them at the airports

09/17 The World Health Organization (WHO) has warned that coronavirus cases are surging alarmingly in Europe, as a "very serious situation" unfolds across the continent.
As Covid-19 infections spike to record numbers, European governments are imposing strict local measures and weighing up further lockdowns in a bid to halt a second wave of the pandemic.
But WHO regional director Hans Kluge said at a Thursday news conference that the increase in cases should serve as a warning of what is to come.
"Weekly cases have now exceeded those reported when the pandemic first peaked in Europe in March," Kluge said. "Last week, the region's weekly tally exceeded 300,000 patients."

Sethimus (Sep 17, 2020 at 10:22)
@endlessblockades: good thing europe is not a country then. no strict local measures in germany. our contact tracing system is still working.