Pinkbike Primer: Everything You Need to Know Ahead of EWS Zermatt 2020 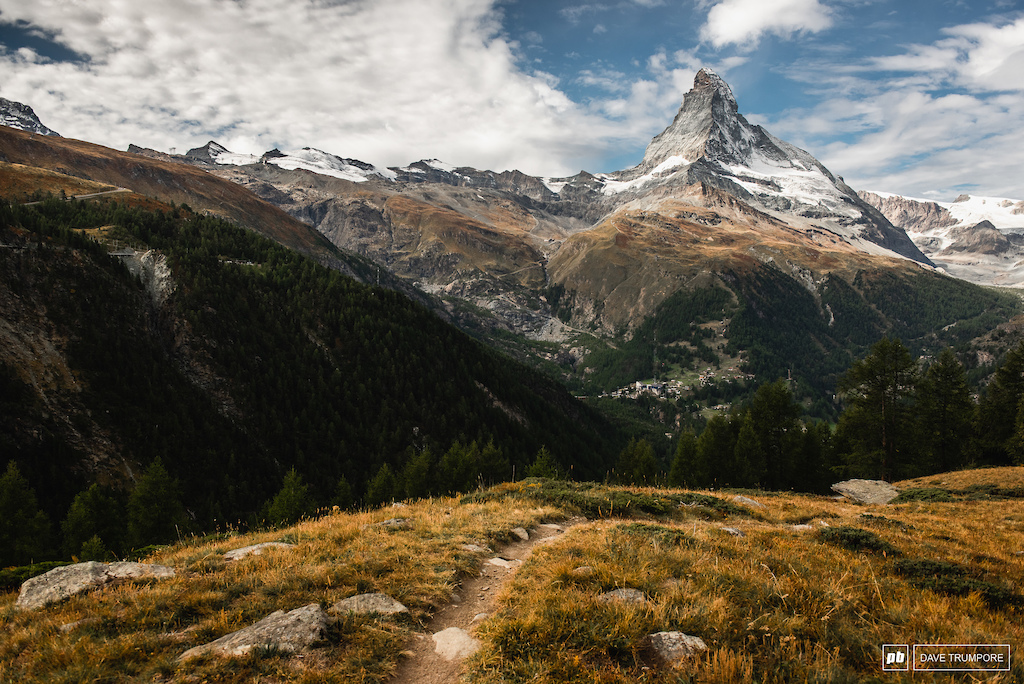 The season closer from 2019 opens proceedings in 2020, it has just been that kind of year. We're back in Zermatt for round 1 of the 2020 EWS season and anticipation is high after nearly 12 months without any EWS racing. Unfortunately, not every rider is here, including three-time champion Sam Hill who, along with other top riders, elected not to make the journey to Switzerland due to the looming shadow of Coronavirus.

On the ground, it's all systems go with social distancing and masking in place to keep riders safe. There may not be a championship at stake but the riders that are here, are here to win. Here's what to expect over the next few days of furious enduro action. 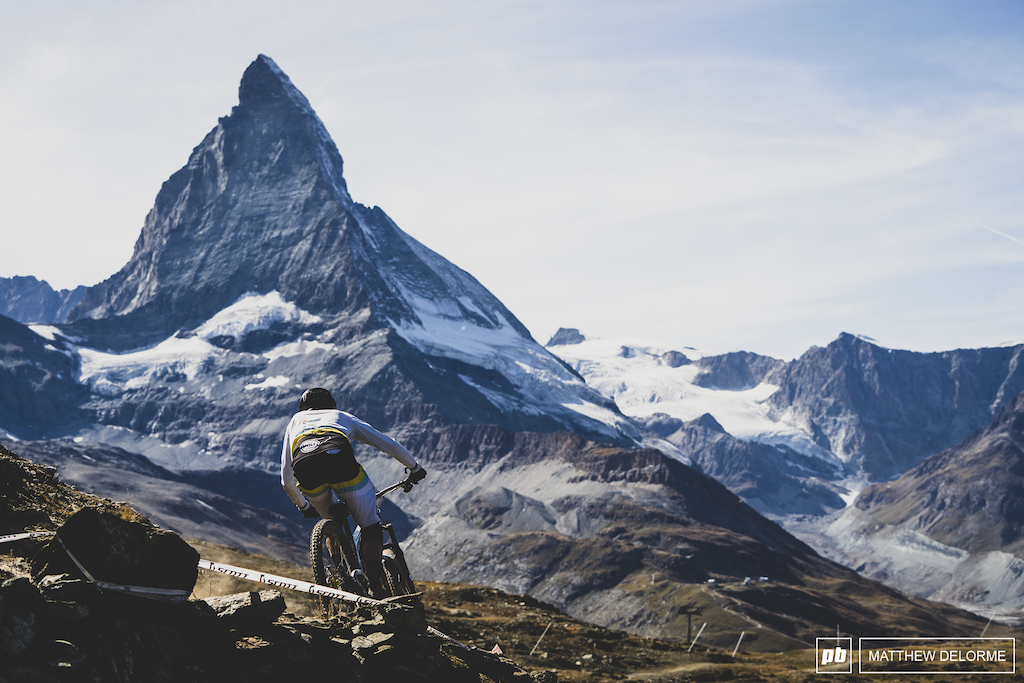 You can't think of Zermatt without mentioning the Matterhorn. Its Toblerone topography has probably dominated your Instagram feed over the past few days and there's a reason for that, it looks stunning from the trails of the Visp region. It's also fitting as it serves as an explanation for the trails - sheer, rocky and pointy. These are high alpine brutes that come with all the switchbacks and rough, sharp rocks you'd expect. With the lengthy stages, big liaisons and altitude (Zermatt town sits at 1,600 metres and the trails all go upwards from there), it's going to be a true test and a rude awakening for the world's top enduro racers. 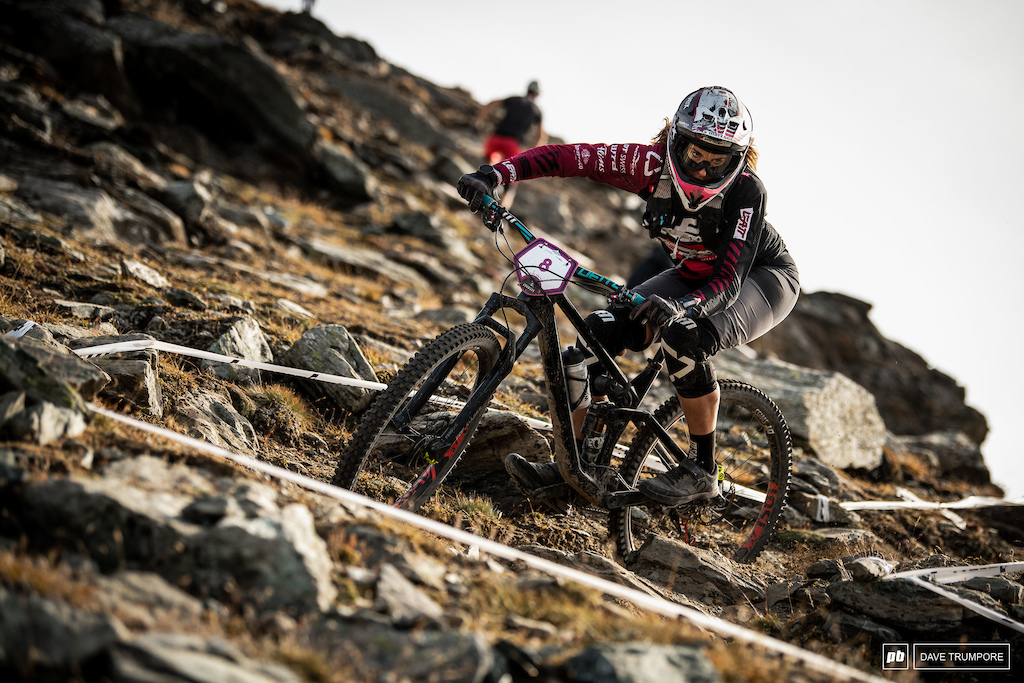 As in 2019, Zermatt will be done and dusted in one day but this year the number of stages has been cut from five to four. Don't be fooled into thinking this will be an easy day out for the riders though as they are still facing 14.5km of special stages with a total of 2,132m altitude loss. On top of that, they'll have 18.47km of pedalled transfers that will earn them 857 metres of that altitude. 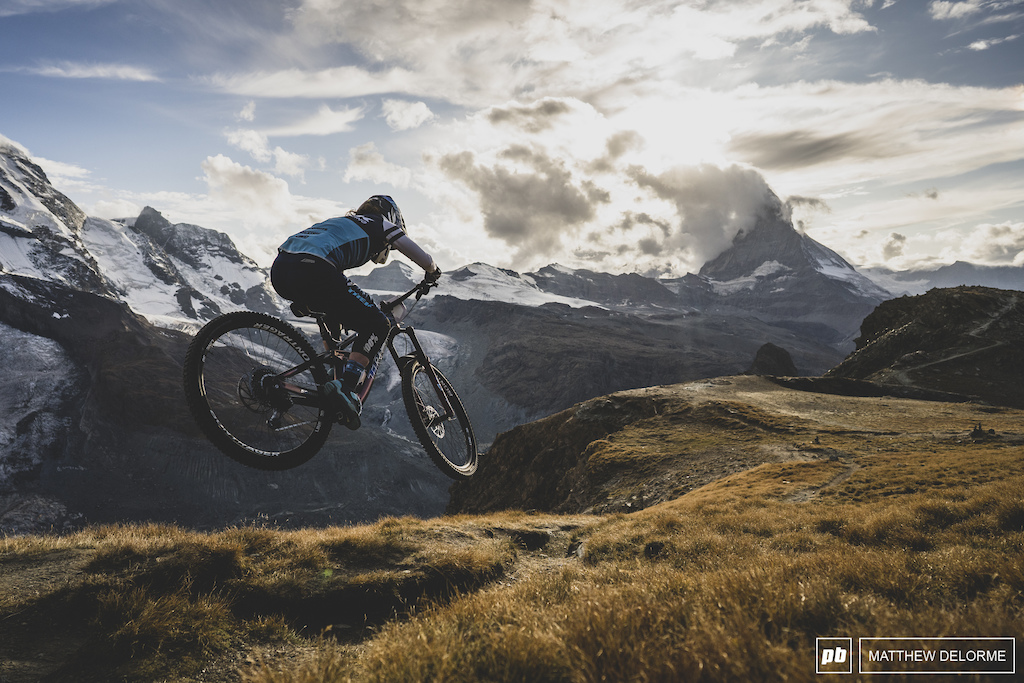 Friday, August 28
Times of clouds and sun with a couple of showers and a thunderstorm // 13°C // 61% probability of precipitation // wind 7km/h 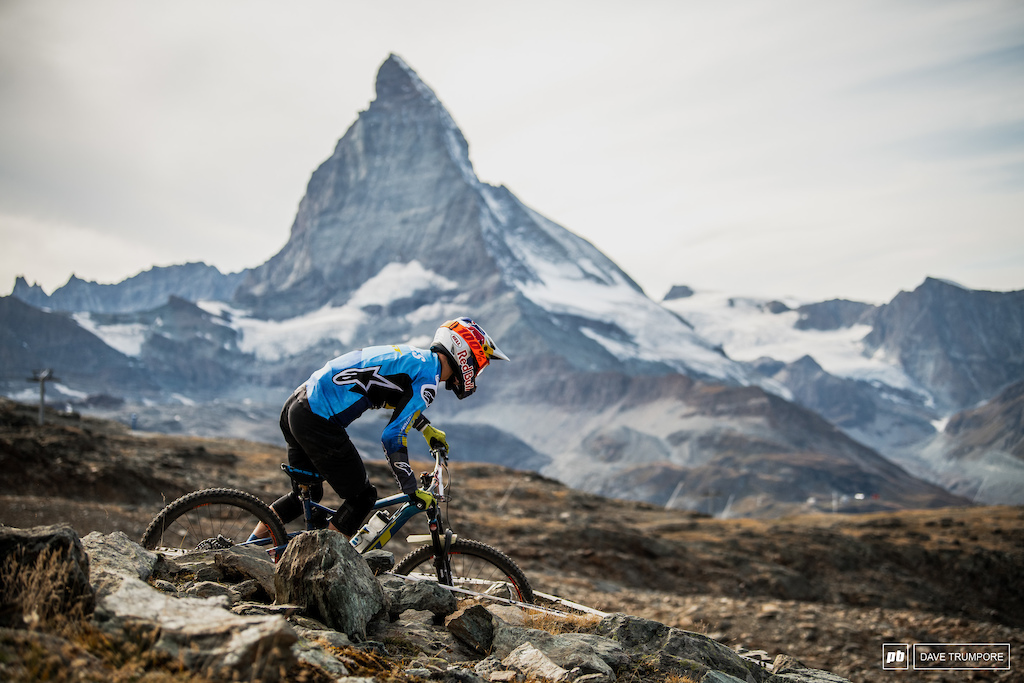 The winner last time out, Martin Maes will be the man to beat again in 2020. Maes won three of the five stages on offer last year and finished second to the absent-this-year Sam Hill in one of the others. The Belgian rider has only ever won EWS races in the latter half of the season (excluding the trio that were stripped at the start of last year) and the milder weather and wet conditions will probably suit him better than his southern European competitors.

Damien Oton - Enduro's Mr Consistent returns from a season riddled by injury last year to reclaim his place at the top of the sport. Oton's last EWS podium was in 2018 but he should be reinvigorated this year on his new team, Orbea. Oton also already has good form this year after winning the Maxi-Avalanche.

Adrien Dailly - Another rider that has shown good early season form is Adrien Dailly, who beat Loic Bruni at his own game at the Challenge Descente 06. Keep an eye out for Dailly to be as fast as ever this weekend. 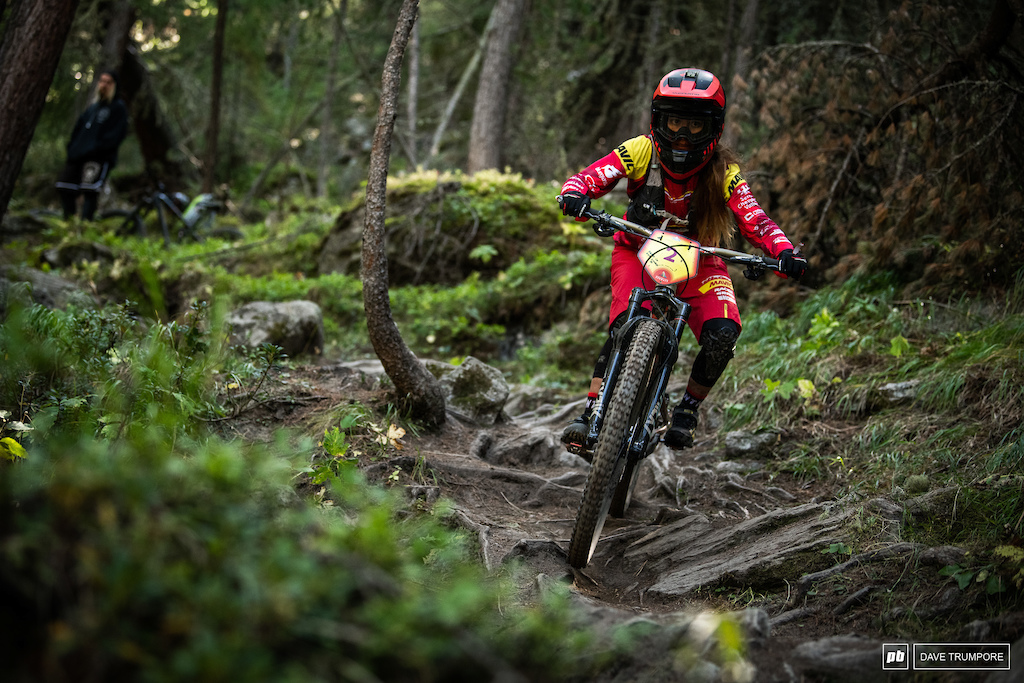 With Cecile Ravanel still not racing, it's hard to look past Isabeau Courdurier continuing her perfect streak in enduro racing. She was a level above the rest of the women's field last year and ended up winning by more than 30 seconds last time out in Switzerland.

Raphaela Richter - Raphaela Richter is my rider to watch this year. The former Under 21 EWS champion only entered two EWS races last year but she podiumed at both of them, including a 3rd place finish here in Zermatt.

Morgane Charre - Morgane Charre posted some seriously impressive results last year as a privateer, including 2nd in Rotorua to kick off the season. This year she's back with the support of the Pivot Factory Team behind her so she can spend less time worrying about wrenching for herself and more on riding even faster than last year.

Becciu (Aug 28, 2020 at 1:01)
@fautquecaswing: Except it's not on DH trails.
Don't get me wrong, Zermatt is great place for alpine riding, the scenery is as beautiful as it gets, but (IMHO) it's not a great place for an enduro race

dick-pound (Aug 28, 2020 at 1:03)
It's ridiculous that Enduro nowadays is basically lift served DH with trail bikes. Athletes should be pedaling at least 2/3 of the vertical drop.

ali-chapple (Aug 28, 2020 at 8:42)
@mnorris122: 4.6% is extremely easy grade to climb! That would make it a white climb (easier than green) by the offical Whistler trail standards, our local green rated climb is about 7%

fautquecaswing (Aug 28, 2020 at 12:25)
That's what is supposed to be nice in enduro: a mix of good shape and technical skills. if you choose a too big biike you will suffer in climbing but maybe be faster going down, or you choose a lighter, smaller bike. With a lift up, you obtain huge 29 bikes with 170 forks. It is kind of ridiculous.

Ploutre (Aug 28, 2020 at 0:36)
Definitely going to be snowing at the top, the local observatory was under some light snow a day or 2 ago. Hopefully they don't have to cancel due to bad weather!

barry9559 (Aug 28, 2020 at 2:41)
No Kasper Woolley :-( That's a pity, was looking forward to seeing his pace away from BC to see if he could still compete with likes of Jessie. Lot's of Canadians on the start list so disappointing he hasn't/couldn't make the trip.

nukedchipp (Aug 28, 2020 at 3:48)
Wow, surprised at all the negative comments. I'm glad there's any racing at all. lots of arm chair racers criticising the stages etc. It'll be ridden at warp speed by these guys and gals and ALN has already got the scars to prove it's no give away. Let's get behind it instead of just dissing it.

headshot (Aug 27, 2020 at 22:54)
Those course previews look like my Go Pro vidoes. Slow and rattly. Not sure I'd enjoy tryin to go fast on awkward hiking trails like these...

Arierep (Aug 28, 2020 at 3:06)
Agree on the video quality thing. But regarding the trails, the enduro format was born in tight natural hiking trails

Steve-skidvd (Aug 28, 2020 at 1:32)
I was a bit disappointed, the first two stages were flat out open single track and bike park normal.... then we get into stage 3, a lot more tech but quite short... and then stage 4, now that is a stage... riders are going to have to pace themselves, full gas is also going to bring its own problems, mechanicals could be an issue with all that rock.... Not complaining, great to see some racing back, even with reduced numbers...

fedfox (Aug 27, 2020 at 20:51)
Nigel page said it, no overall title no extra motivation to attend. I wish they did award the over all title, over all it does sucks that not every one can attend but is also not fair for does who do. Glad racing is back

Bobadeebob (Aug 28, 2020 at 1:58)
Then we should wipe out all EWS results since the start of the series. There is a long list of countries from which people would have found it extremely difficult to attend EWS races over the past 8 years

johnnygrosso (Aug 27, 2020 at 18:11)
EWS is a brand name a bit like the World Series of baseball, we're all aware you can't be a world champion at something if nobody else is taking part.

On the other hand, sports history is full of examples where someone couldn’t “be there”, due to injury, politics, etc.

florepe (Aug 29, 2020 at 0:43)
Enduuroo
i am getting tired with all these marios, with big googles, clothes full of colour and brands, Distroying the trails because of incapability to ride a switchback / using the brake correctly.
ItS getting worse because now we see more Marias(without mustache) same dressed, same googles. NO RIDING STYLE
Nature trails are not made for those
Its ENDUUROOI

AyJayDoubleyou (Aug 28, 2020 at 6:56)
I think they cover all bases. No I wouldn't watch every video they put out, but they have great mechanic videos for all abilities, some of the coaching ones I find useful, and occasionally there will be some real gems where they cover an event like the Andes Pacifico

CM999 (Aug 28, 2020 at 7:58)
@Molesdigmyjumps: I’d rather stick with ric and the way it’s been done for the last couple of years than let the gmbn children spoil it with their sponsor placement comments

texag (Aug 28, 2020 at 6:18)
Interest in "retro pedal bikes" must vary regionally. Not everyone wants to hit the easy button all the time.